The biggest game in the Bundesliga this weekend was the Berlin Derby. Hertha Berlin played host to Union Berlin at the Olympiastadion. It was the first time since 2019 that the Olympiastadion was at full capacity as both clubs came into the match with contrasting needs and objectives.

Hertha are second from the bottom in the table, but still just one point from safety. While Union are sitting in seventh place four points behind fifth-place Freiburg and chasing a return to European competition.

It was Union who claimed all three points with an emphatic 4-1 victory, completing their third victory over their city rivals this season. The visitors were by far the better side, and it plunges Hertha deeper into trouble at the foot of the Bundesliga table.

In this tactical analysis, we examine the attacking aspect of Union Berlin’s tactics and how they proved too much for Hertha Berlin to contend with. 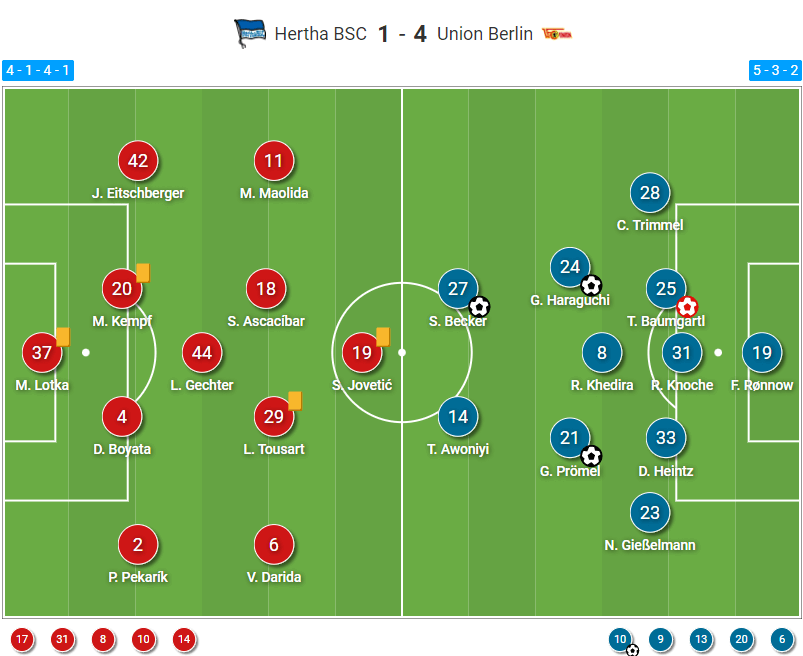 Marcel Lotka retained his place in goal as Alexander Schwolow is still out with a thigh injury. Marco Richter and Dedryck Boyata both returned to the squad following their absence in training all week. But unfortunately for Hertha Niklas Stark and Marvin Plattenhardt both missed the game through injury.

It was good news for Union Berlin as Genki Haraguchi Christopher Trimmel recovered from COVID-19 to make the starting eleven. Niko Gießelmann recovered from his illness in time and Grischa Promel returned to the starting line-up after his suspension. However, after picking up a fifth yellow last week Paul Jaecke misses out. Dominique Heintz returned to the defence after recovering from a muscular injury.

They kept faith with Frederik Rönnow in goal after his clean sheet last time out.

When holding possession Urs Fischer set Union up in a 3-1-4-2 formation. 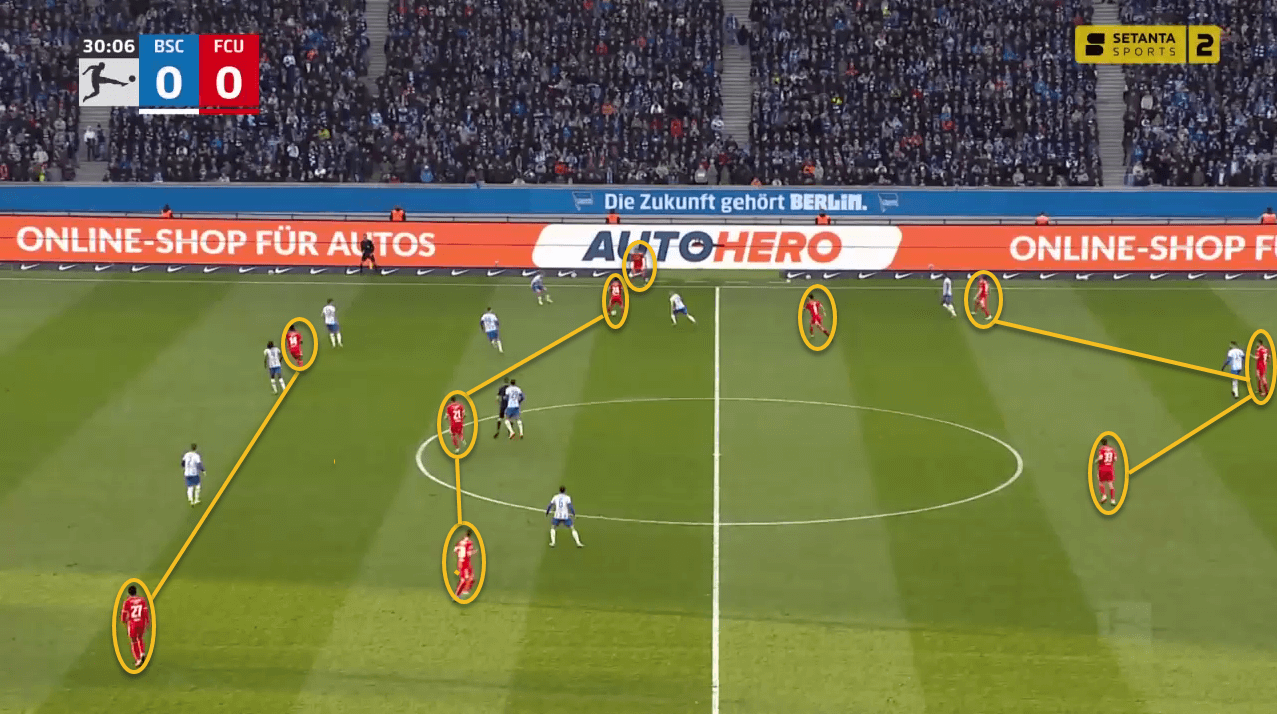 They showed flexibility when attacking through different areas of the pitch. The centre midfield pairing of Haraguchi and Promel was particularly good at moving between the lines and occupying the half-spaces.

They moved cohesively with the wingbacks throughout the game, so Unions attacked and offered a threat out wide and through the centre. This caused problems for Hertha as they looked to keep a compact and consistent shape when defending. Look at the space that the centre midfielders and the wingbacks have in the image below. The 3-1-4-2 shape has allowed all four players to get beyond Hertha’s midfield. 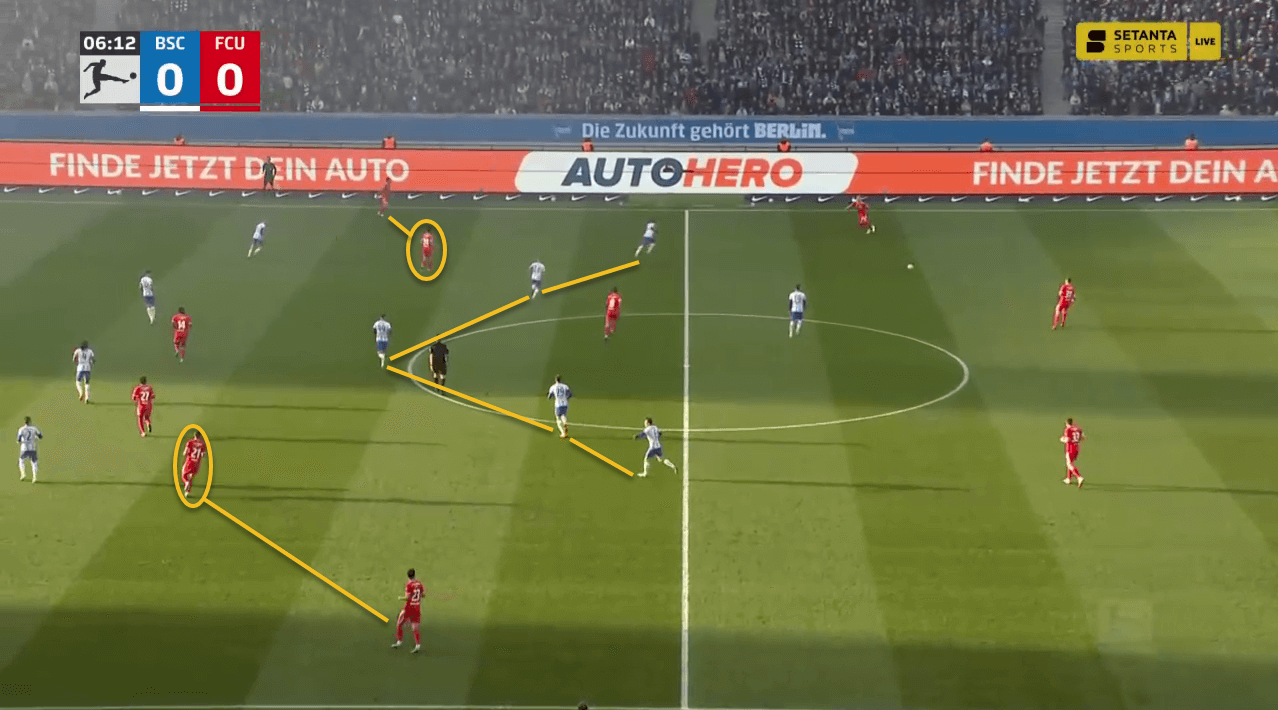 Hertha struggled to cope with the movement and variation that the Union attacking shape offered.

Felix Magath set Hertha up in a 4-3-3 formation. When defending their half of the pitch Hertha looked to transition to 4-1-4-1. The flexibility and movement that Union performed caught Hertha out and they became very disjointed all over the pitch.

Here are two examples of Hertha’s defensive shape. You can see how the defence has lined up. They planned to try and remain compact. You can also see how vulnerable the defence is because of how disjointed the midfield line is. Look at how the Union players move to exploit the open space. 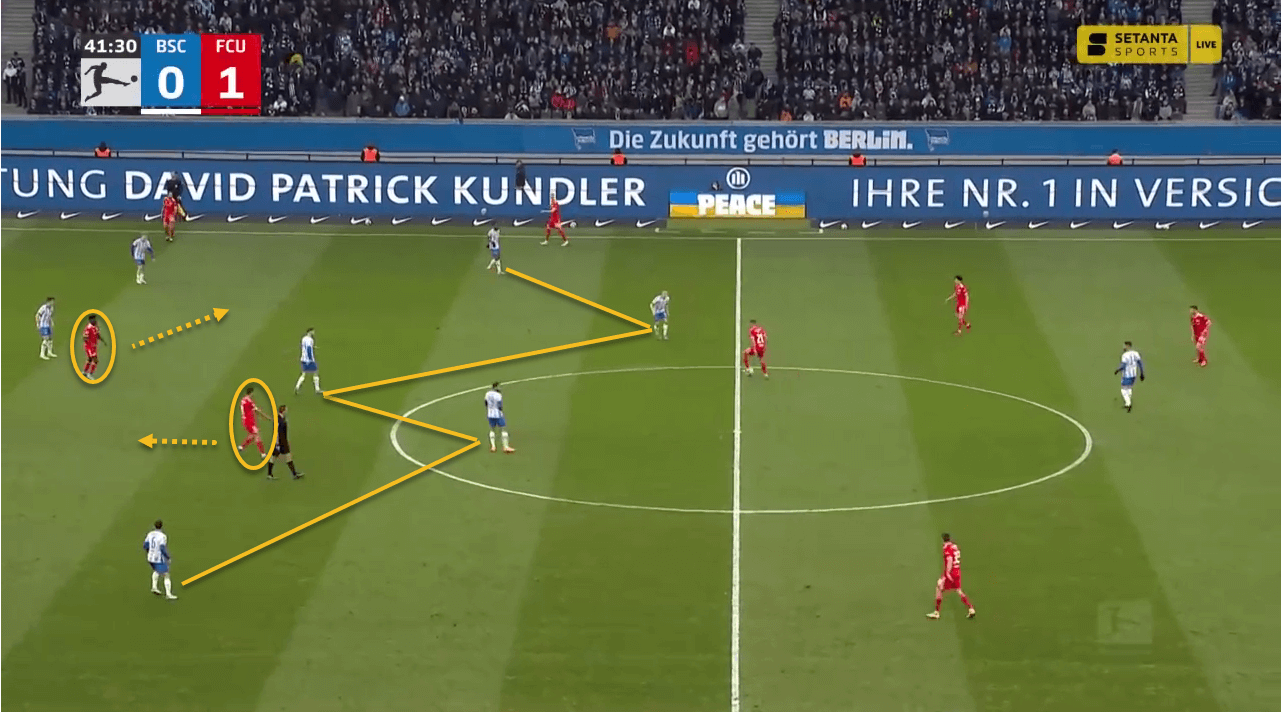 Hertha just struggled to maintain any defensive shape during Union’s attacking play. The midfield tended to lose their defensive discipline as they were either closing the space or chasing the ball and trying to make up for numerical disadvantages through Union’s wide build-up play. This kept increasing the space left between the midfield and the defence.

This example shows how Peter Pekarik Hertha’s right back moves away from his defensive line as he tries to close down Union wing back Niko Giesselmann. The shape of Hertha’s midfielders in this scenario shows how much they were struggling to cope with the movement of Union’s midfielders and wingbacks. 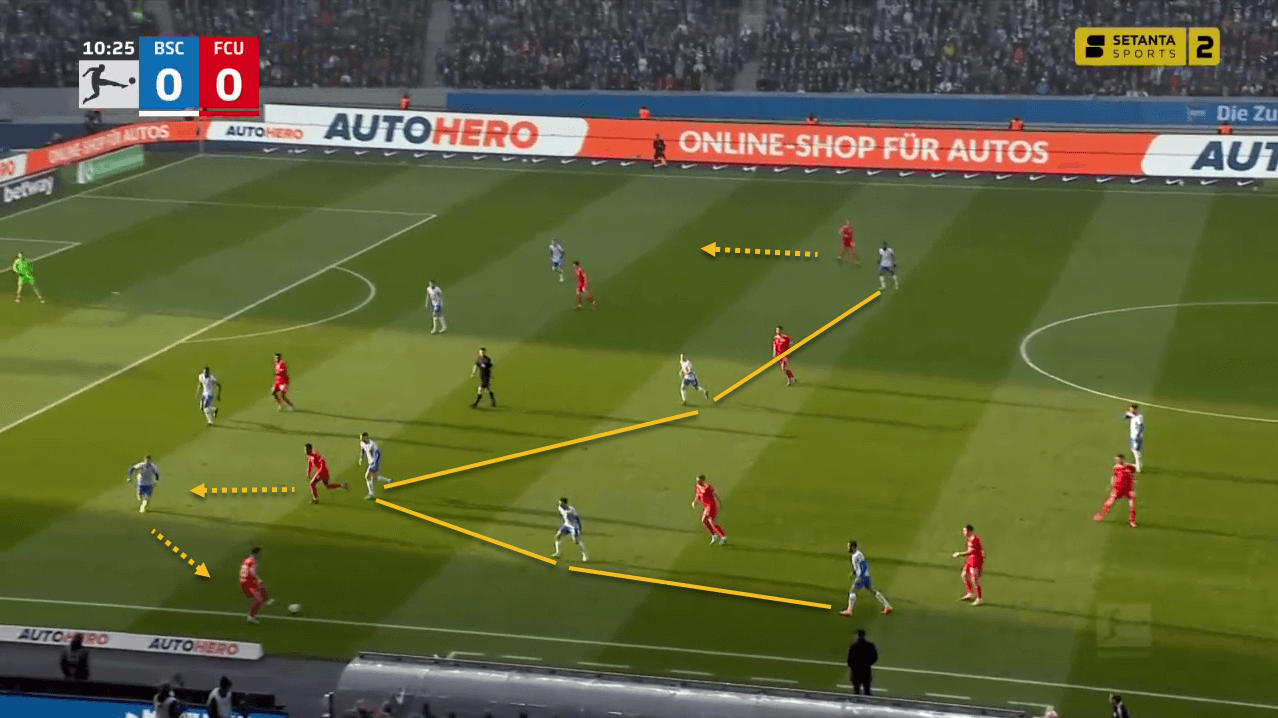 Hertha did not provide enough organisation out of possession to stop Union from penetrating their defensive third. They were too easy to play through.

Hertha’s lack of defensive structure affected the way the team attacked once they won the ball. Since the players were trying to cover the spaces that Union’s attacking shape created, whenever Hertha won the ball back, they were unable to transition from defence to attack with any kind of purpose. This enabled Union to transition from attack to defence before Hertha could cause any problems. Union looked to defend in a narrow 5-3-2 defensive shape.

Thye looked to force Hertha out wide and then press to win the ball back in the wide areas. 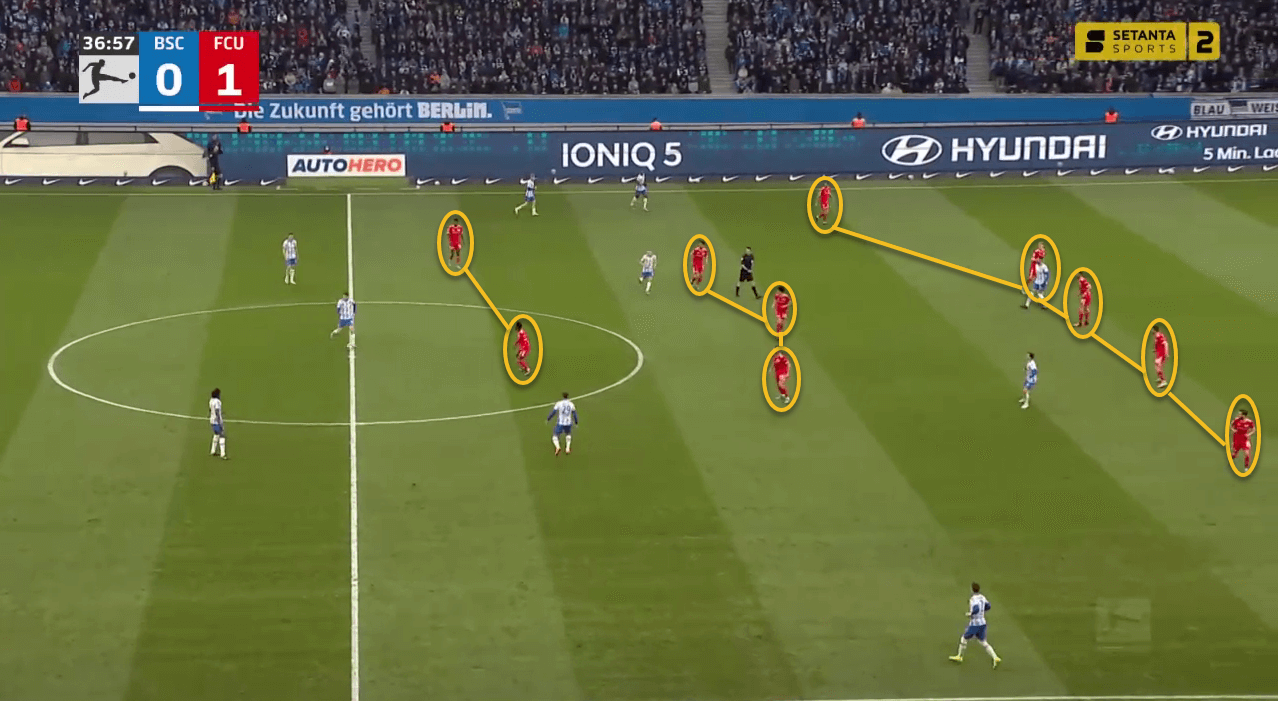 Union’s wide play was fundamental to their victory. They were highly effective at overloading the wide areas and stretching Hertha both vertically and horizontally.

In the first half, they looked to create wide overloads from deeper areas. The purpose of an overload is to attract the opposition to an area of the pitch by placing additional players in that area. This then causes space to open in other areas, as the opposition looks to match you numerically in that area.

In Union’s case, they were looking to create space behind Hertha’s midfield and behind Hertha’s full-backs. This was a constant attacking threat implemented by Union throughout the match also. Hertha equalised just after halftime, but Union maintained their tactical approach and took the lead once again within minutes of Hertha’s equaliser. Once again the goal comes from Union creating an overload out wide, isolating Hertha’s right back and then getting behind the defence. 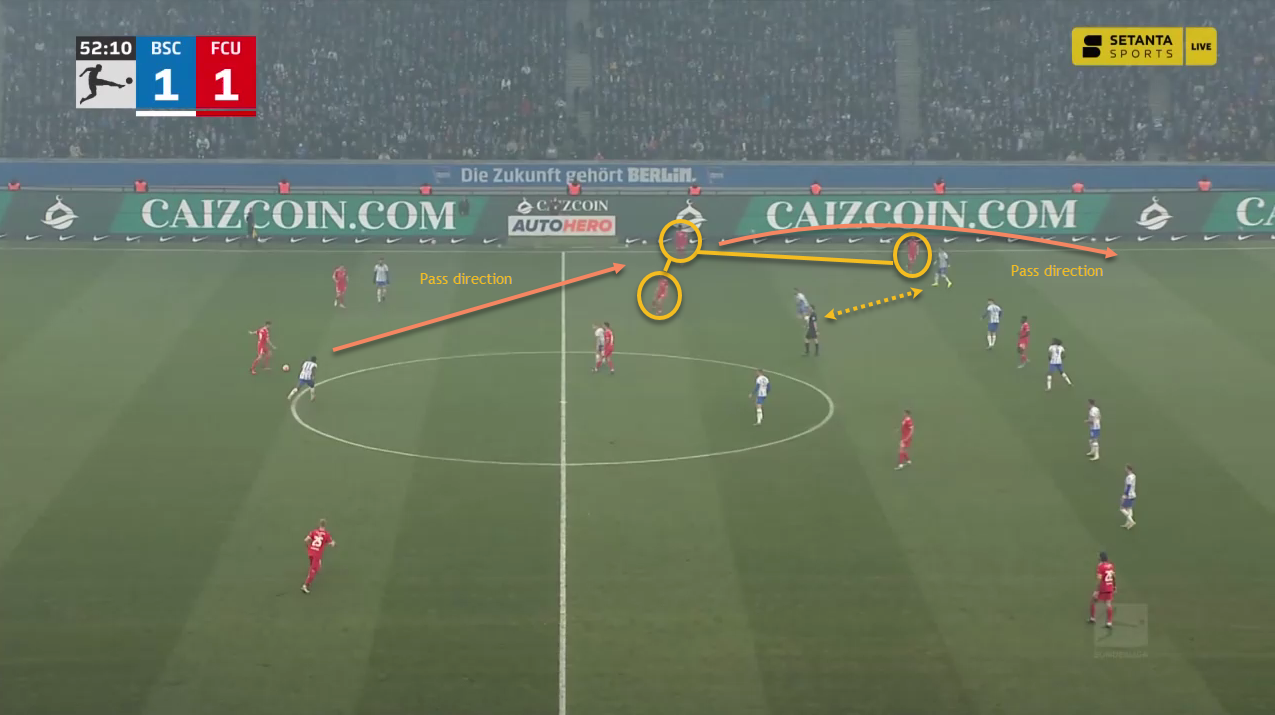 Look at this passage of play. You can see the right centre back Baumgartl is operating wide during the build-up. Haraguchi, Trimmel and Khedira make up the overload as they create a 4v3 situation. The wide centre back role proves pivotal because Baumgartl is closed down by Hertha’s left-winger, Maolida. This allows Baumgartl to progress the ball into Khedira and from this point Union have already created the space to attack.

Hamaguchi’s clever movement to function as the fourth person in the overload attracts another Hertha’s central midfielder towards the play. This leaves Hertha left-back Eitschberger caught in between closing the space in front of him or leaving the space behind. 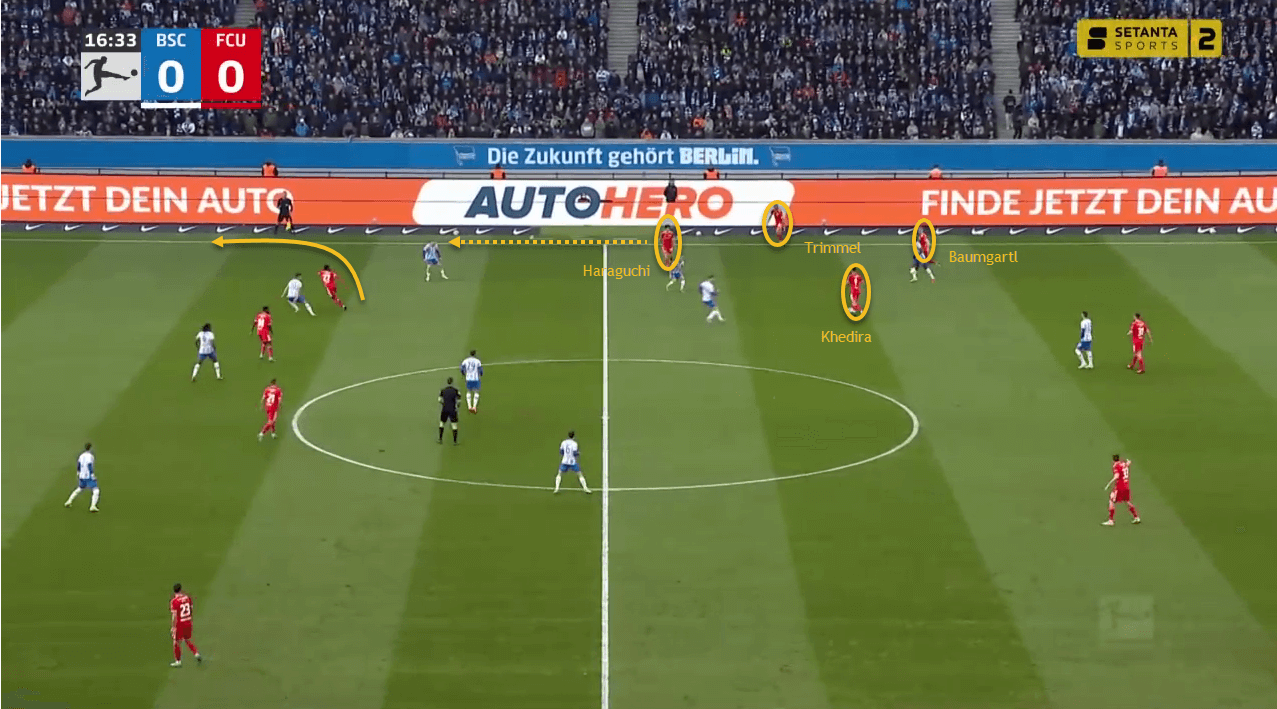 A big part of Urs Fischer tactics in this game was to try to attack from the wide areas and isolate Hertha’s fullbacks. Earlier in the analysis, we talked about the cohesive movement and clever positions that both Union’s wingbacks and midfielders were taking up to support this pattern of play.

This next example shows this. You can see how Haraguchi and Promel, Union’s central midfielders positioned in the half-spaces and close to the wingbacks. Creating the possibility of two overloads down the right and left channels.

This meant that when Union used either of the wide centre backs during their build-up, it always had to be Hertha’s wide players that looked to press the play. When it happened, this is when Union would take full advantage and looked to exploit the space they vacated 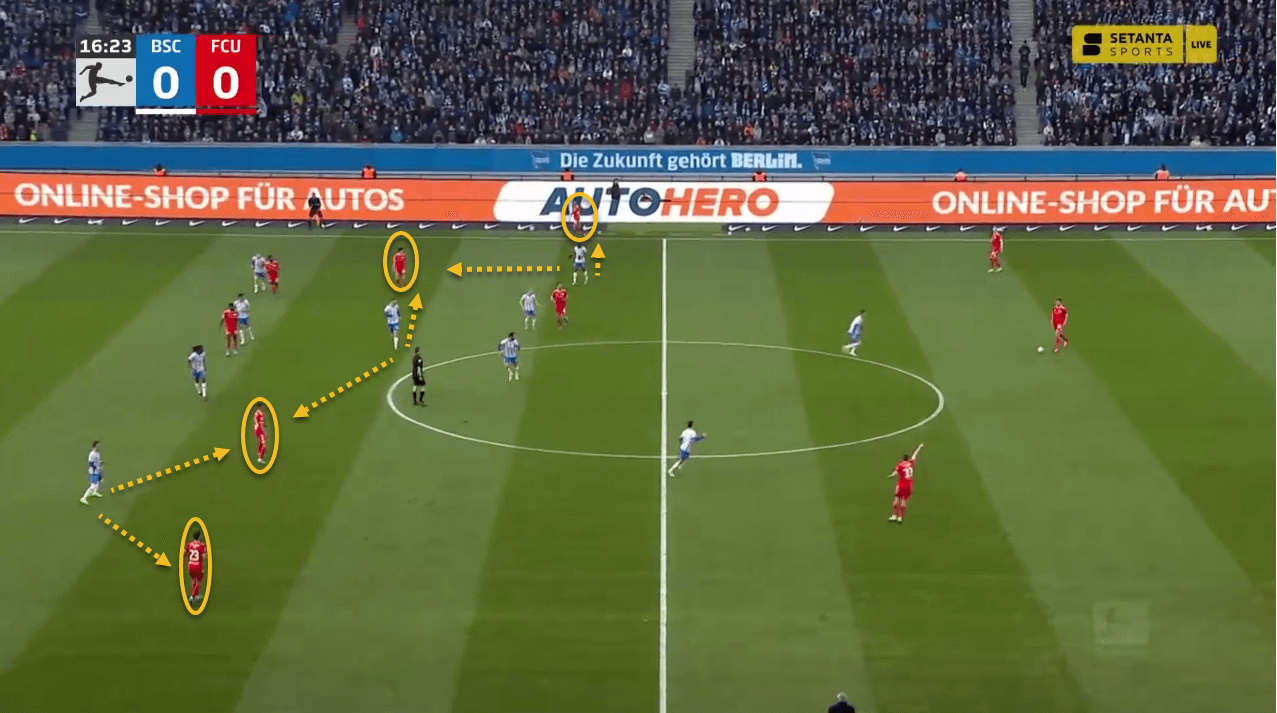 This analysis has shown the key tactical components used by Union Berlin that ensured the victory of their city rivals. Urs Fischer will be delighted with how Union performed and the victory will give fans hope that qualifying for European football is still a possibility. Their attacking structure was very effective. It offered a lot of variety as they pulled Hertha apart with very impressive wide play and good movement from the midfield.

The tactics implemented by Fischer worked perfectly as Hertha’s poor defensive structure enabled Union to control the game both in and out of possession.