Gaetan Laborde is a 27-year-old centre-forward currently playing in the French Ligue 1 with Rennes. Laborde has been a standout out this level for some time now, with his 18 goals and eight assists in all competitions last season with Montpellier prompting Rennes to part with 15 million euros in order to secure his service this previous summer. Laborde has repaid this already having beaten his tally from last season, at the time of writing, with 19 goals and eight assists this campaign in all competitions. Only Paris Saint-Germain’s Kylian Mbappe has more goals and assists than Laborde this season, however, Laborde’s 24.44 expected goals and assists is the highest value in the league.

This tactical analysis and scout report will provide an analysis of some of the key elements of Laborde’s game whilst also providing an insight into the tactics that he best suits.

Whilst Laborde certainly has decent pace, he is far from being on the same level as the previously mentioned Mbappe. And so, his game is very different. Laborde can operate as part of an attacking duo, or as a lone striker, but regardless of what system, he looks to consistently drop in between the lines where he can get on the ball and bring teammates into the attacking phase.

This is reflected in the heat map showing his actions from all competitions this season. Whilst there is plenty of action within the penalty box, as you would expect, it is interesting to see the amount of action in either half-space, specifically on the right side of the pitch. On top of this, there is a relatively large amount of actions occurring from within his own half as well. 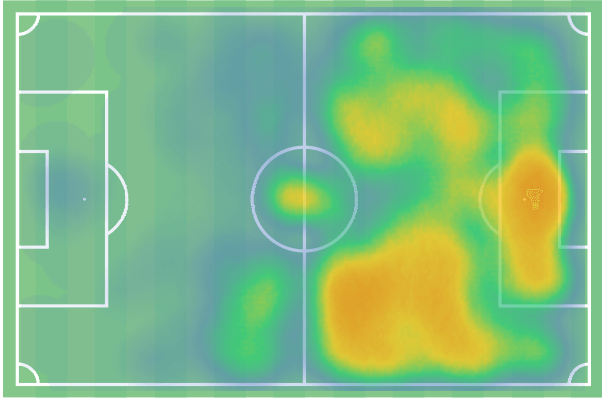 Laborde is frequently the first forward pass option available and is very useful in moments of attacking transition, where his teammates can quickly access this forward pass away from pressure. Laborde can hold up possession perfectly well, and whilst he has a lean physique, he has good strength. However, his footwork and skill on the ball, allows him to dribble away from any tight pressure too.

Laborde is perhaps best though when able to quickly link play with limited touches. He scans regularly and judges when it is the right moment to play these quicker passes and advance the attack at pace.

We can see him dropping deeper to receive the long ball forward, whilst his teammate overlaps into the space he has just vacated. Laborde lays the ball off first-time to his left-winger. 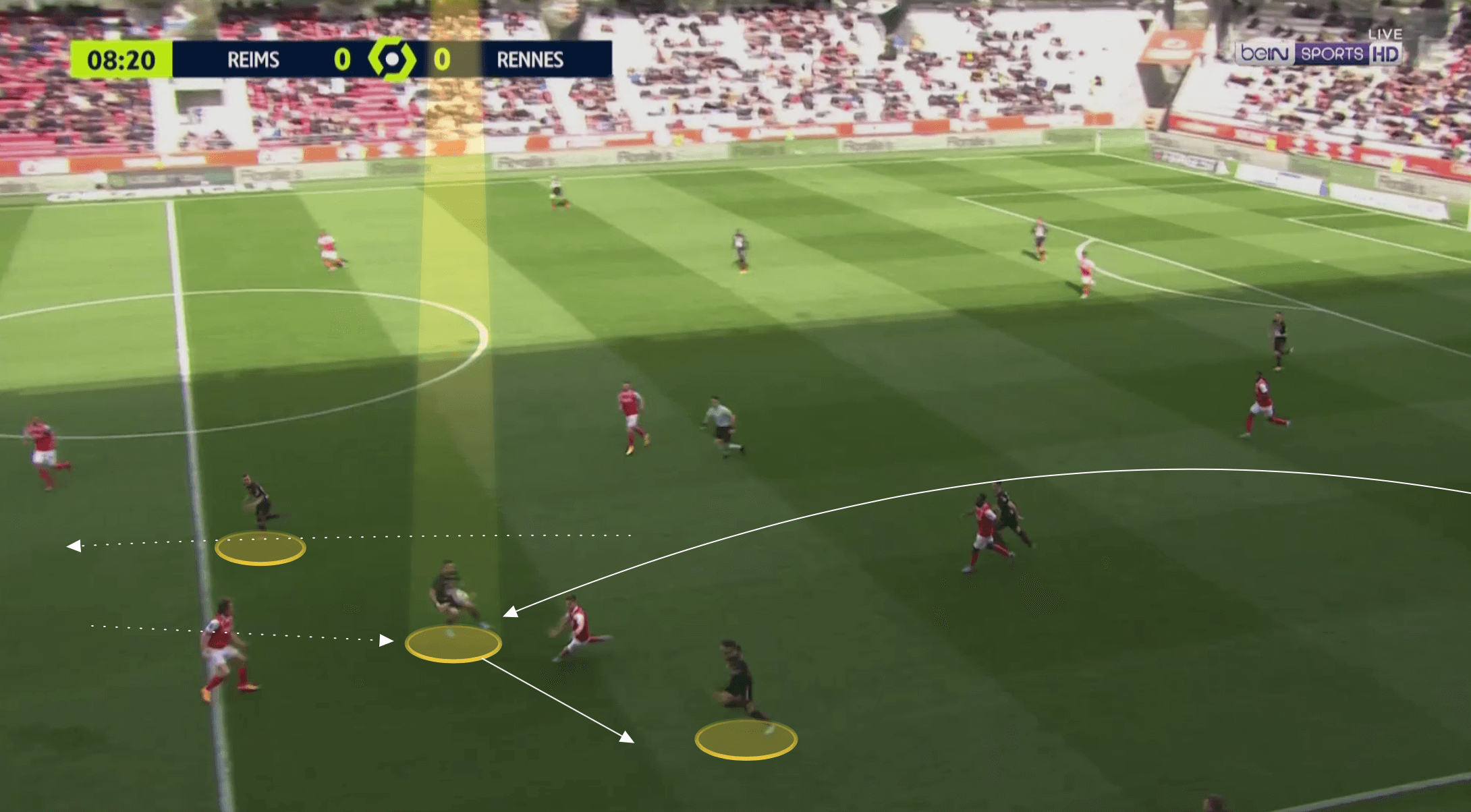 Laborde will move into areas well inside his own half, as already alluded to, and in doing so can consistently evade being marked tightly, allowing him to get on the ball.

Once more we can see his outstanding awareness, as he observes the run being made in behind in the image below, calmly sliding his teammate into the space he created by dropping so deep.

Laborde is effective with this kind of quick link-up play in the final third too and will regularly drop into deeper areas, even if only five yards away from his marker. However, in doing so he can either draw defenders out of shape or find space on the edge of the area.

He frequently disguises his pass options in these areas and we can see him doing so below, dropping off of his marker before quickly laying the ball off to the adjacent teammate. 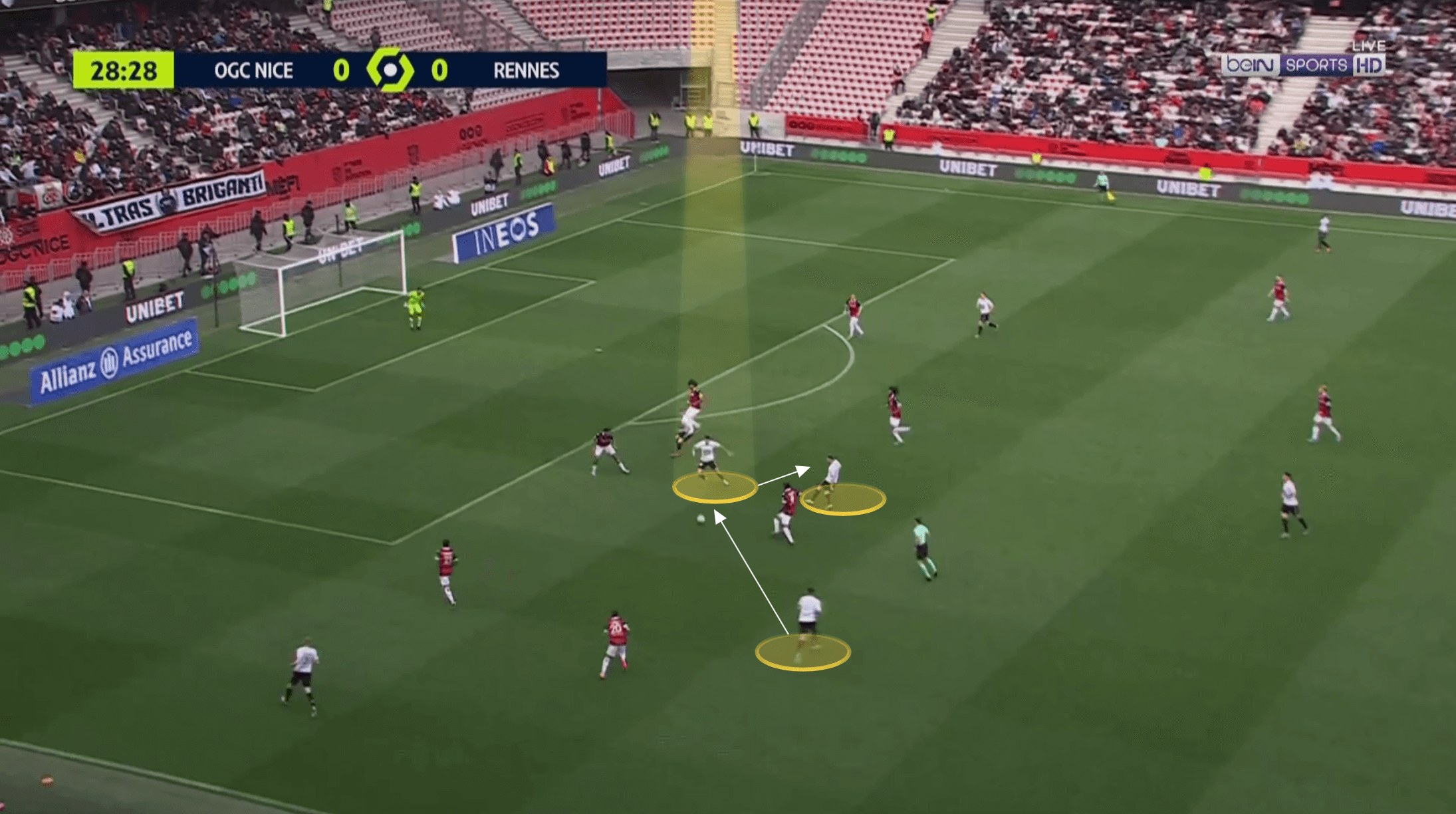 Given his eight assists already this season it is worthwhile us looking into Laborde’s creative streak, for while he is excellent in front of goal as a finisher himself, he shows a varied approach to creating chances for his teammates from a variety of areas.

Firstly, Laborde is dangerous when operating in wider areas of the pitch. He makes 1.65 crosses per 90 on average and has an impressive 35.5% completion on these. He almost exclusively uses his favoured left foot to deliver the ball and will cut inside onto this foot if positioned on the right side of the pitch.

He has excellent vision, and can place the ball in gaps in the opposition defence, allowing teammates to hit these areas at pace. 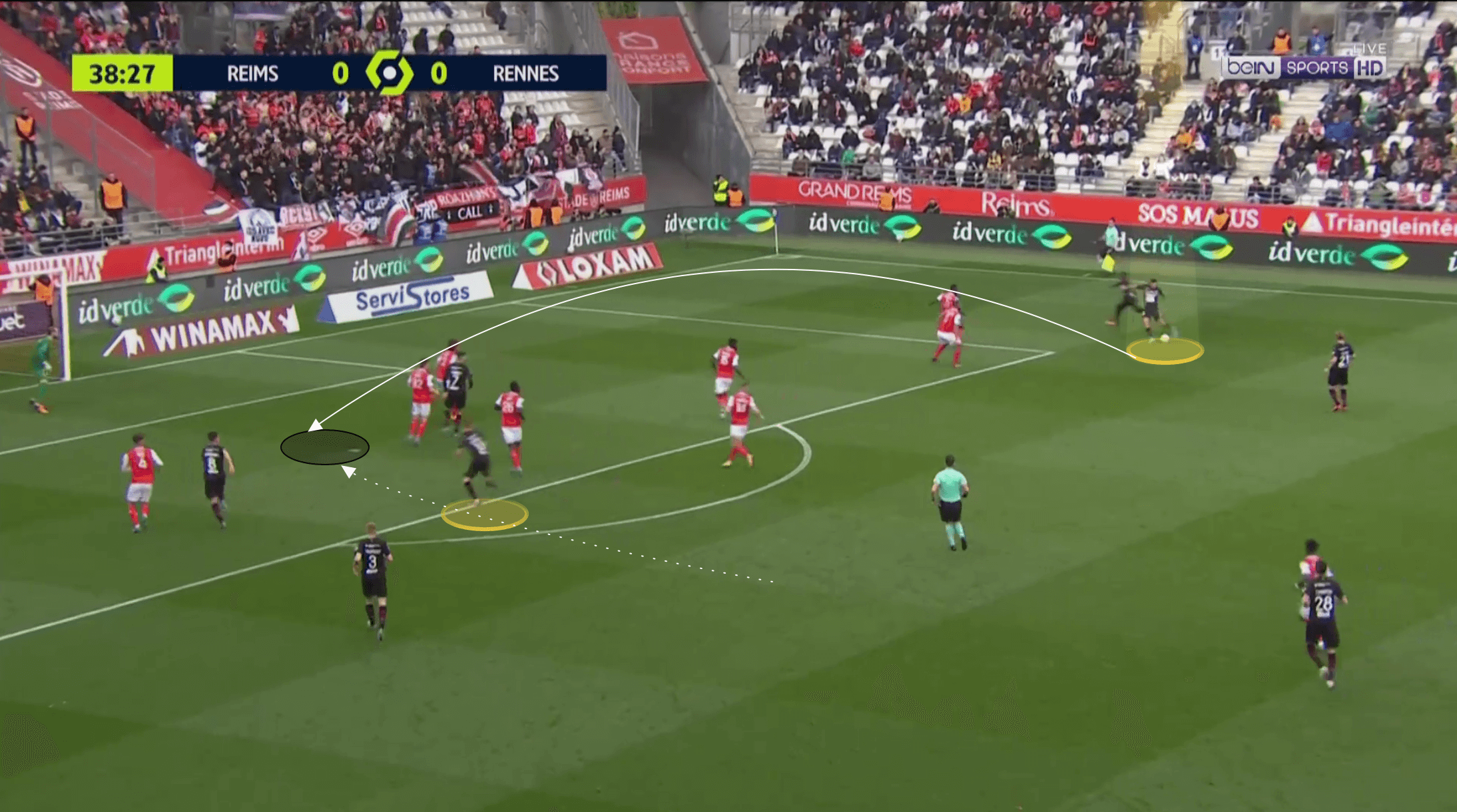 His awareness extends to finding crosses, or playing longer passes, that others might not see. We can see a prime example of this in the following image as he drives the ball entirely across the area to the winger in space on the other side – despite being in a position where many would look to access the space between the penalty spot and the six-yard box. 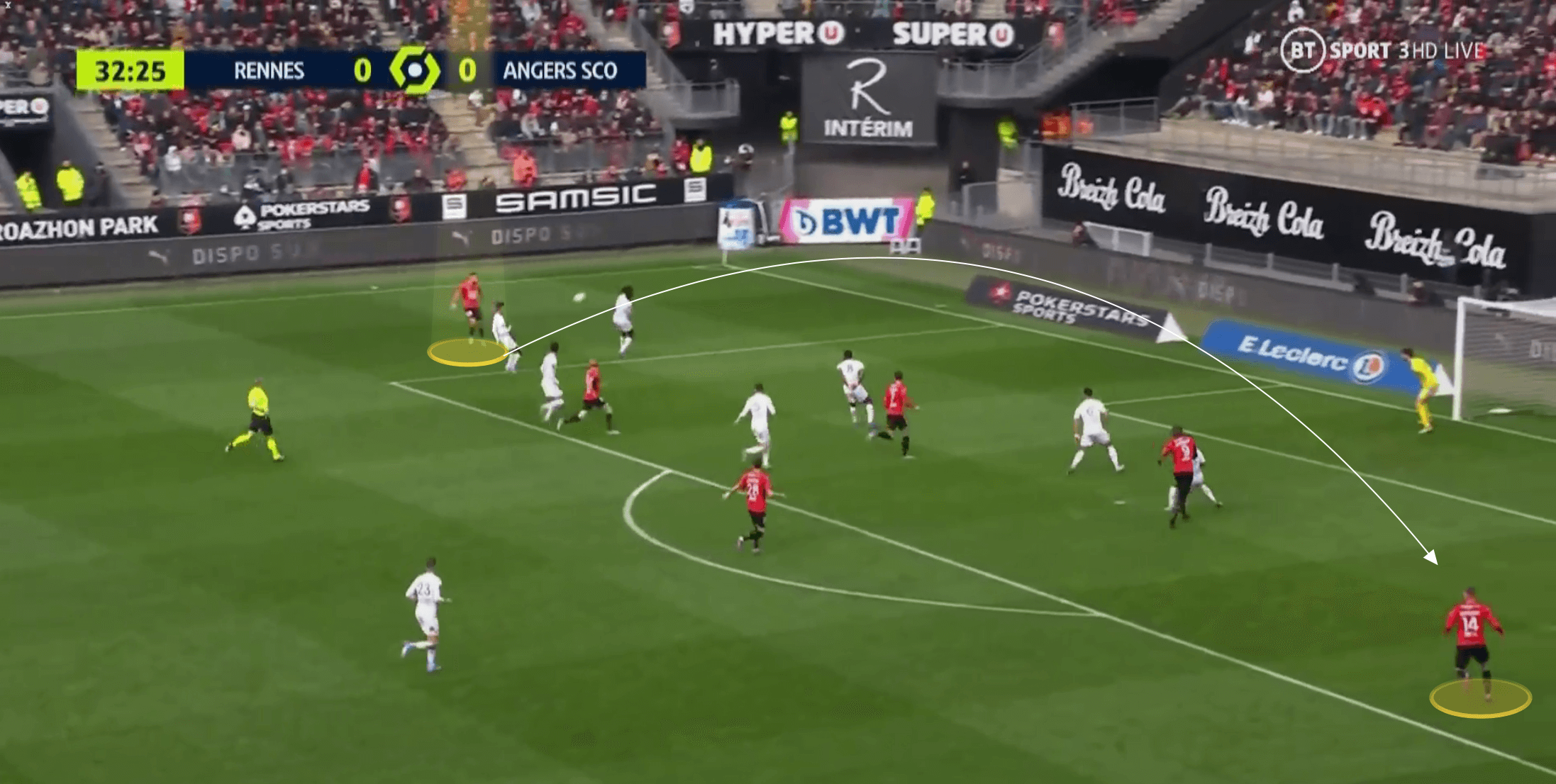 Improvisation is a consistent concept seen throughout Laborde’s game, apparent with his link-up play, creative streak, and his finishing in front of goal (more on that later).

Expect Laborde to play blind passes and use flicks and tricks to open up space in the final third. However, these aren’t merely hopeful efforts, but involve him scanning and therefore having good awareness of his surroundings, whilst carefully choosing the pass and moment to play these more audacious through passes.

We can see him doing so in the image below, dropping towards the ball and dragging a defender with him. His strike partner recognises this and drops into this area, whilst Laborde flicks the ball first time with the inside of his left foot into the space behind, beating his marker and finding his teammate with the pass. 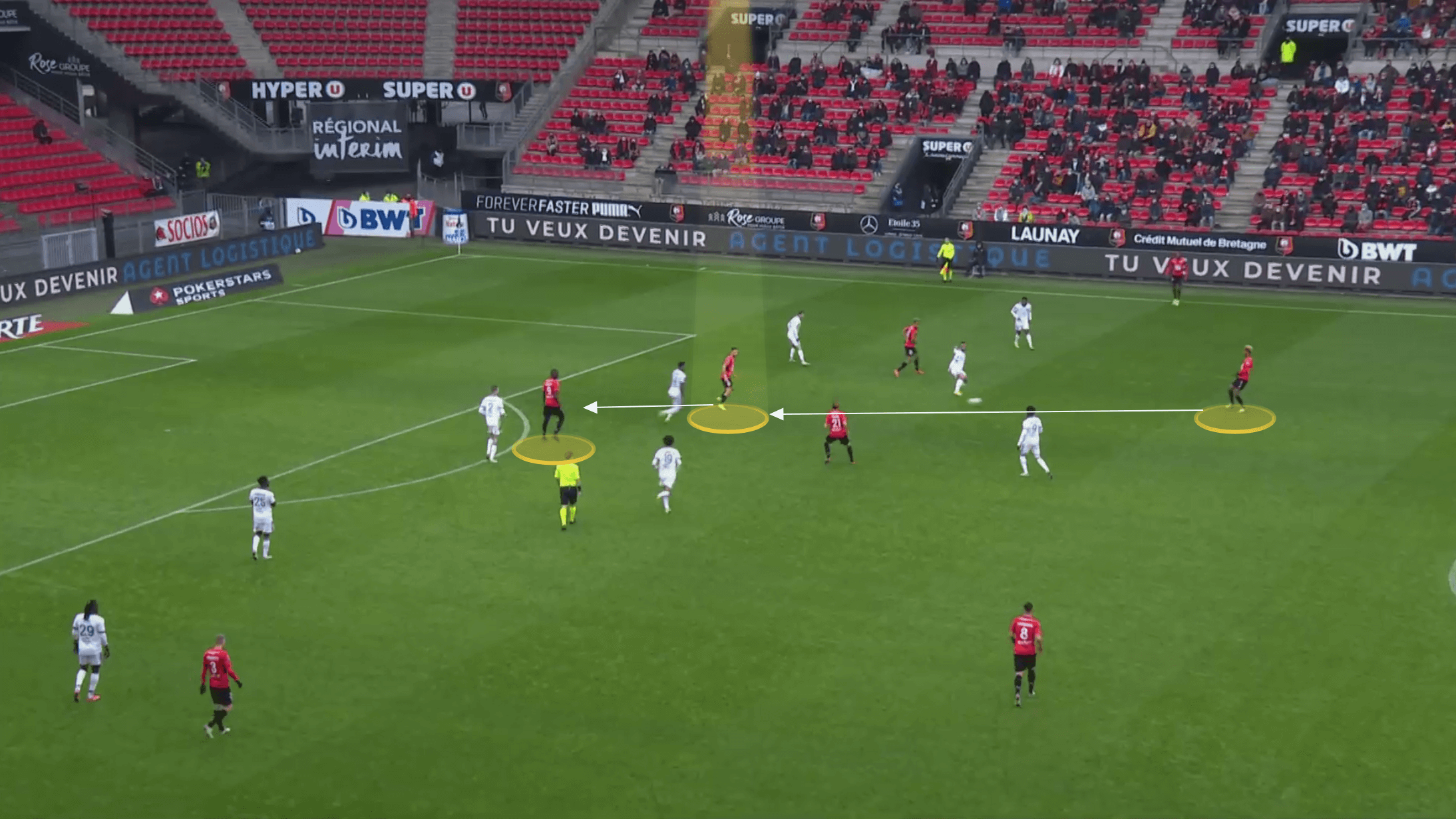 His composure in crucial moments is apparent as well. He doesn’t panic when under pressure, or when in a goalscoring position and will get his head up often before receiving and decided whether it is the right moment to shoot or find a pass option.

We can see him heading the ball back inside in the following image, from a position where many would shoot. As the cross comes in, and despite the presence of two adjacent defenders, he showed the coolness to lay the ball inside into the open man in the six-yard box. 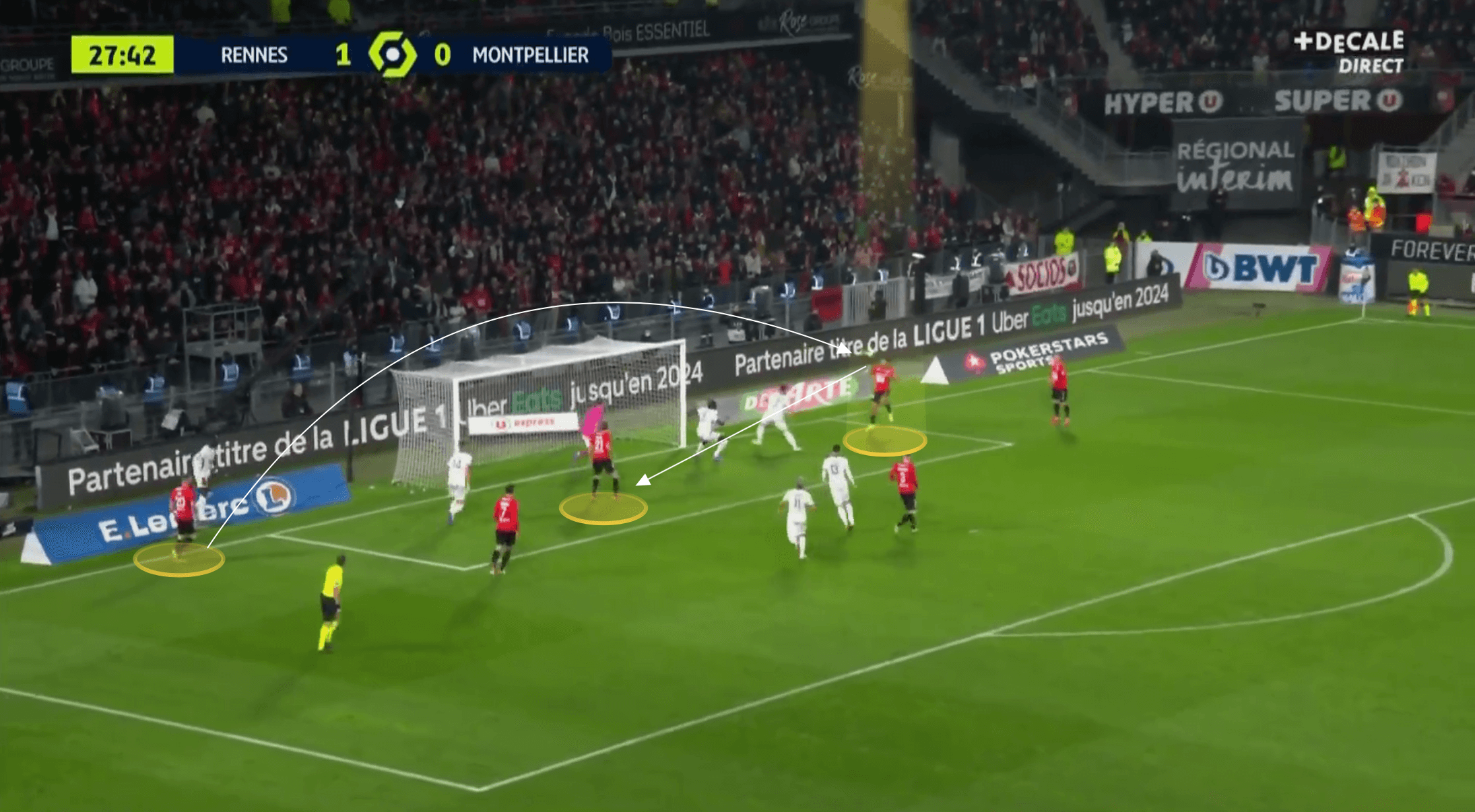 But given his 19 goals in all competitions for Rennes this season, we have to look at his finishing ability too.

He has enough confidence in his right foot where he will shoot with it if he has to, but admittedly does prefer to shoot with his left wherever possible, whilst he has talent aerially as well.

If in enough space to do so, expect Laborde to cut inside onto his left foot, just as he does when making crosses. Even though defenders must surely expect him to do so at this point when in a 1v1, Laborde generally choose to commit to it with 2-3 yards of space between him and the defender, and takes the shot on very quickly after doing so, generally leaving little time for the defender to react and attempt the block or tackle. 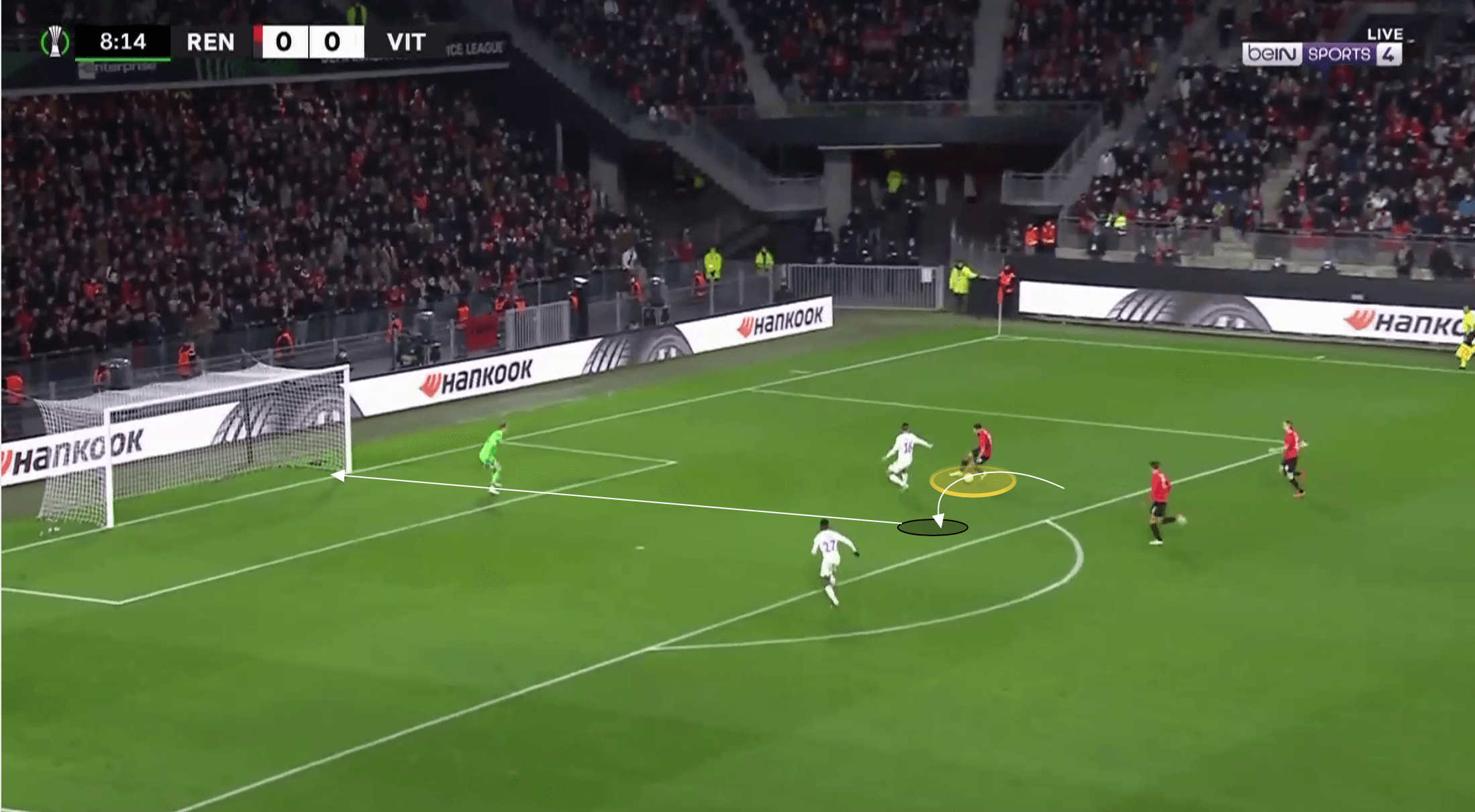 This theme of taking the shot on early has proven successful for Laborde and he can catch defenders and goalkeepers off guard through this approach.

Below he receives the ball inside the opposition area and is immediately under pressure from surrounding defenders. He doesn’t set himself to take the shot, instead touching and immediately shooting past the goalkeeper, reminiscent of Andriy Yarmolenko’s highly regarded goal for West Ham against Aston Villa earlier this season. 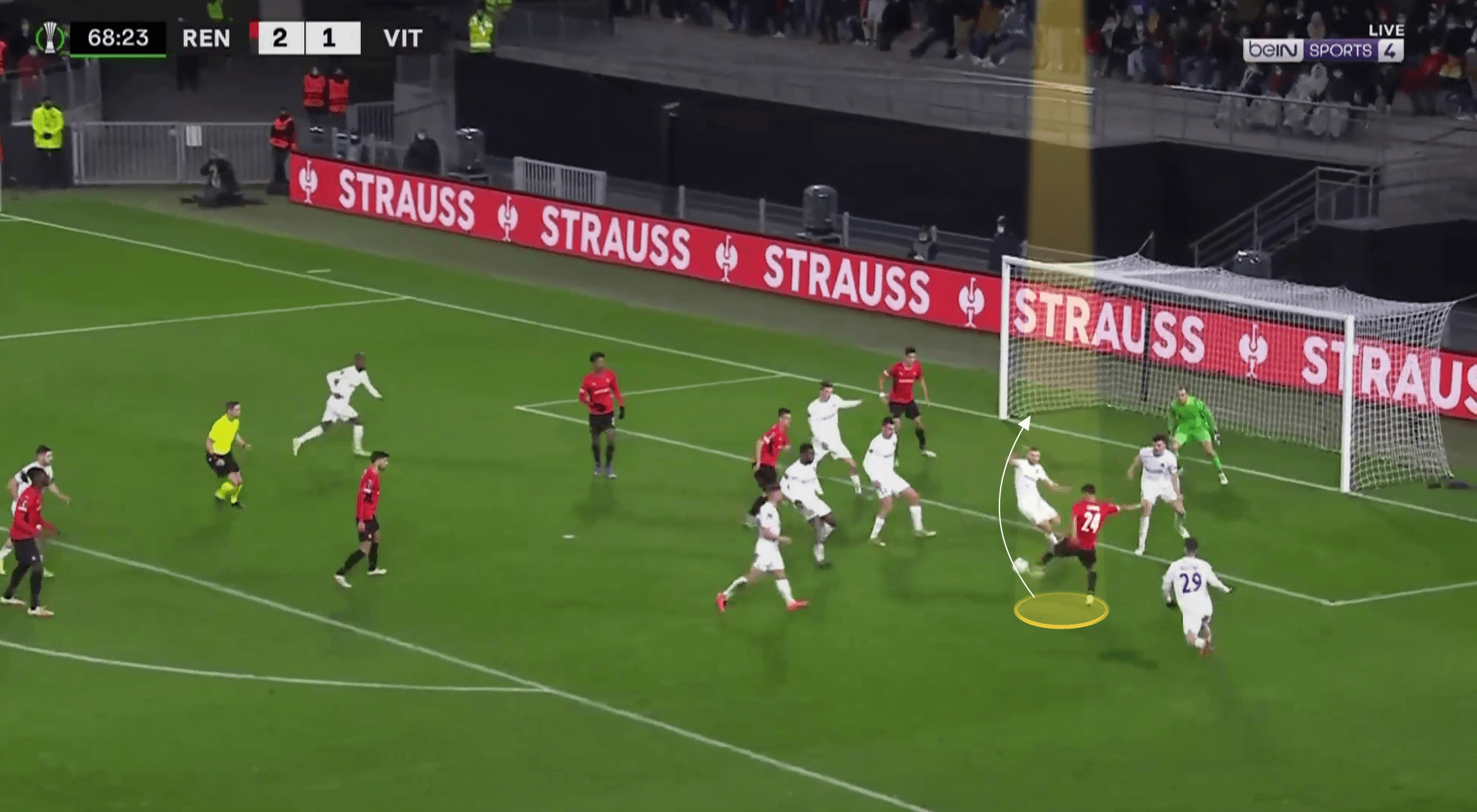 This ability to take the shot on early is an example of his knack for improvisation and shows he has impressive technical ability but also reads the game well too.

On top of these quick shots, he has a penchant for more acrobatic efforts too. 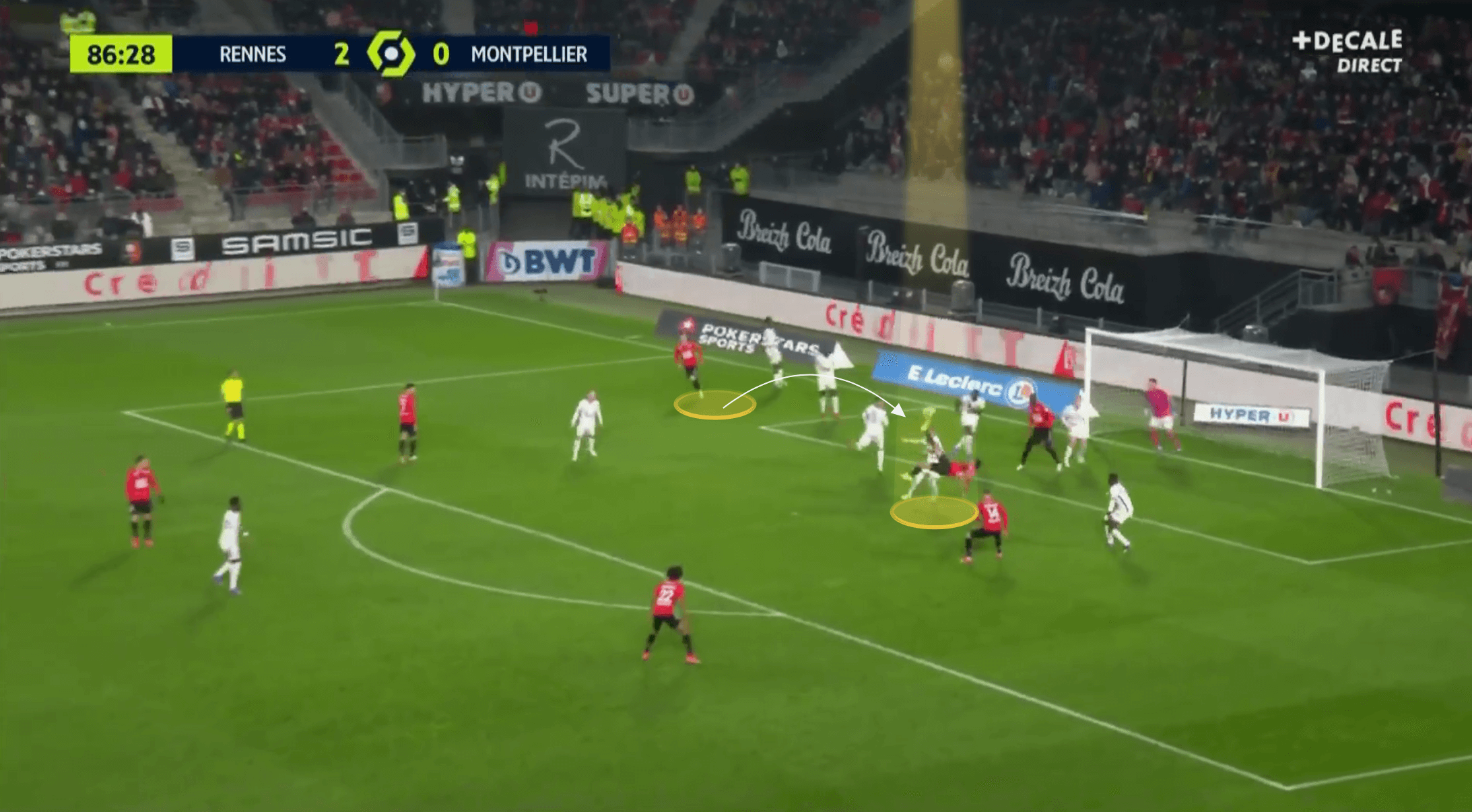 If he can find space inside the opposition box he can latch onto crosses and has excellent accuracy on headers. Not only can Laborde direct the ball towards corners with some regularity, but he also generates enough power on these headers where a goalkeeper’s chance of getting their hand to the ball is greatly diminished. 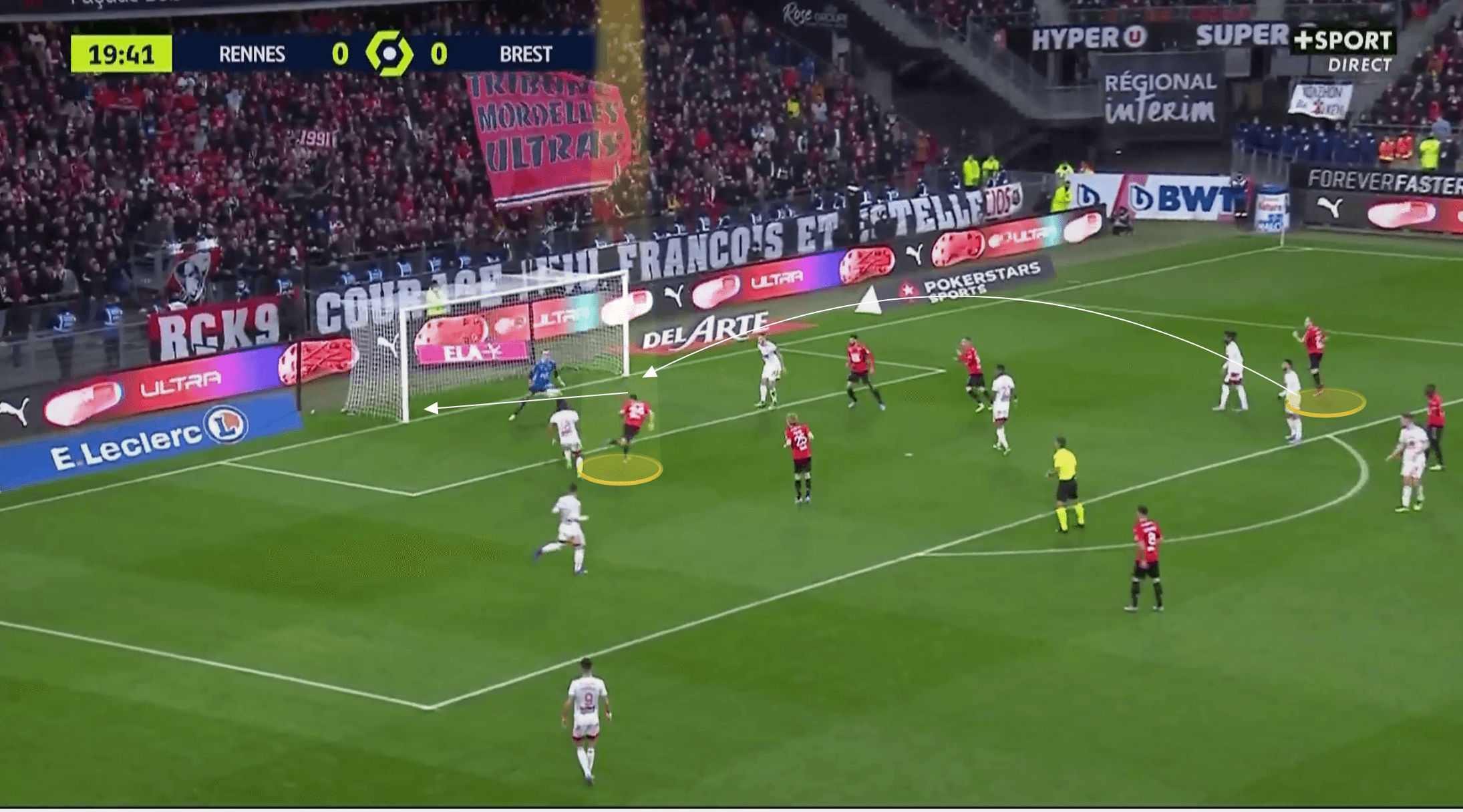 His composure in the final third is evident. As already mentioned, he doesn’t look in any rush, and yet he doesn’t hold onto the ball too long and his shot selection is often of the highest quality.

We can see him reacting first to get to the rebound after a shot is saved from a teammate, and with his first touch he chooses to deftly chip the goalkeeper, in a moment where most would opt for a side-footed shot to safely direct the ball in any direction towards the goal. It is this confidence and swagger in front of goal that makes Laborde such an aesthetically pleasing striker to watch. 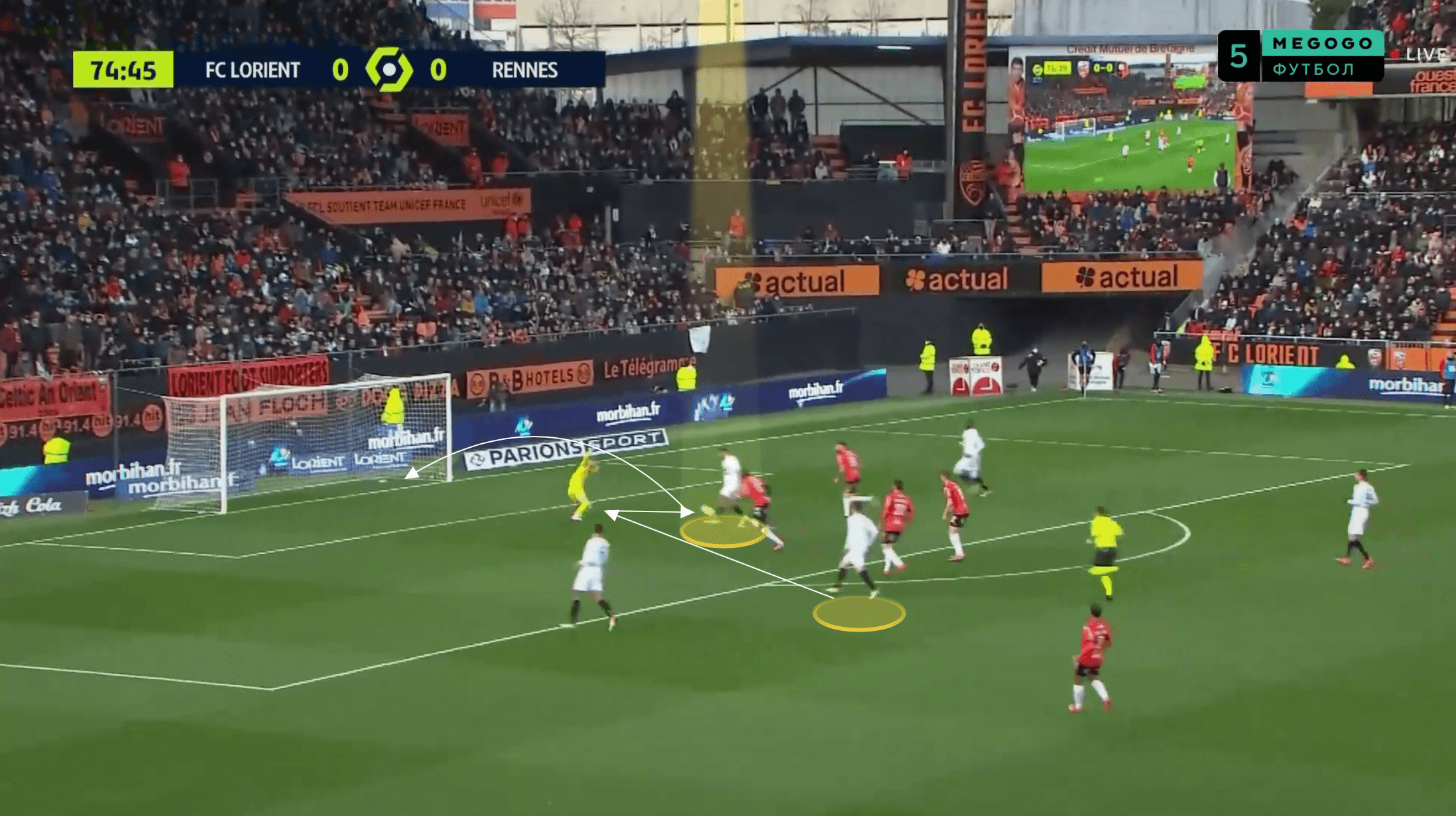 It has proven to be an outstanding move on Rennes’ part to bring in Laborde last summer, despite plenty of rumoured interest from the Premier League. Laborde has been one of the most effective forwards in Ligue 1 this season, and as shown in this analysis, not just as a goalscorer, but as a player who can create and link play during build-up phases too. His form has been a big reason as to why Rennes currently sit in third position in the league, and even given he signed just last summer, it’s likely clubs sitting towards the top of other European leagues will look at him once more in the next transfer window.