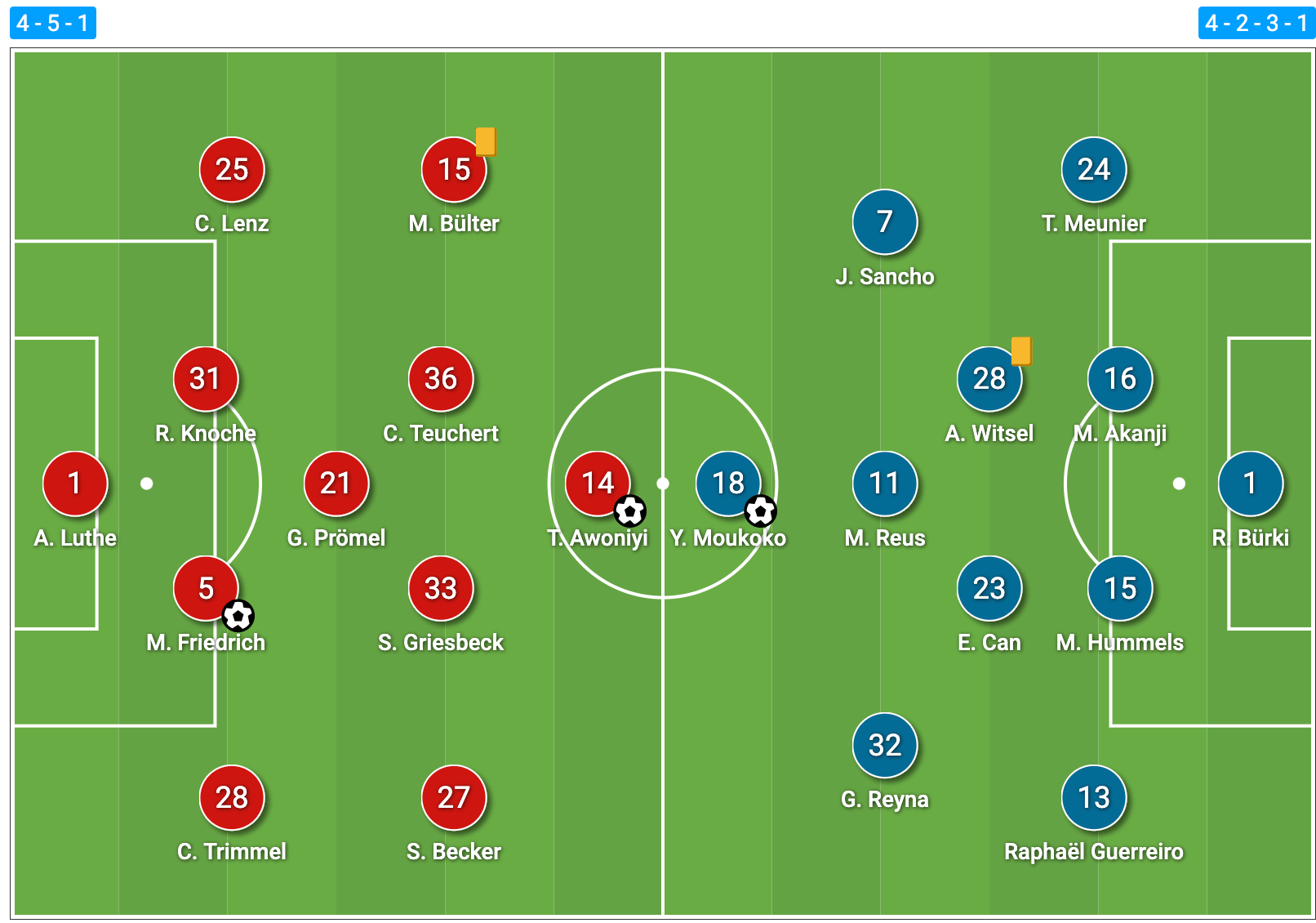 Union Berlin started in a 4-5-1 with Andreas Luthe in goal. Their two centre-backs were Robin Knoche and Marvin Friedrich, with Christopher Lenz as the left-back and Christopher Trimmel as the right-back. Grischa Prömel, Sebastian Griesbeck, and Cedric Teuchert started in the centre of the pitch for Union. Marius Bülter started on the left flank while Sheraldo Becker started on the right, and Taiwo Awoniyi started as their striker.

Terzic started Dortmund in a 4-2-3-1 with Roman Bürki in goal. Mats Hummels and Manuel Akanji started as centre-backs with Raphaël Guerreiro as the left-back and Thomas Meunier as the right-back. Axel Witsel and Emre Can started the match as the two defensive midfielders while Marco Reus started in front of them. Gio Reyna and Jadon Sancho were the wingers while Youssoufa Moukoko got his first Bundesliga goal after starting as the team’s striker.

Terzic had Dortmund revert to the 4-2-3-1, which they had experience using previously in the season. After starting their year with three in the back, Dortmund went to the back four, typically featuring a 4-2-3-1 when they did. In four out of his final five matches in charge, Favre opted for the 3-4-2-1. With Terzic in charge, Dortmund reverted back to a back four, both for their pressing structure as well as their initial movement in attack. An important part of their press was Moukoko, who played as a striker. His movement helped dictate where Dortmund could apply pressure. 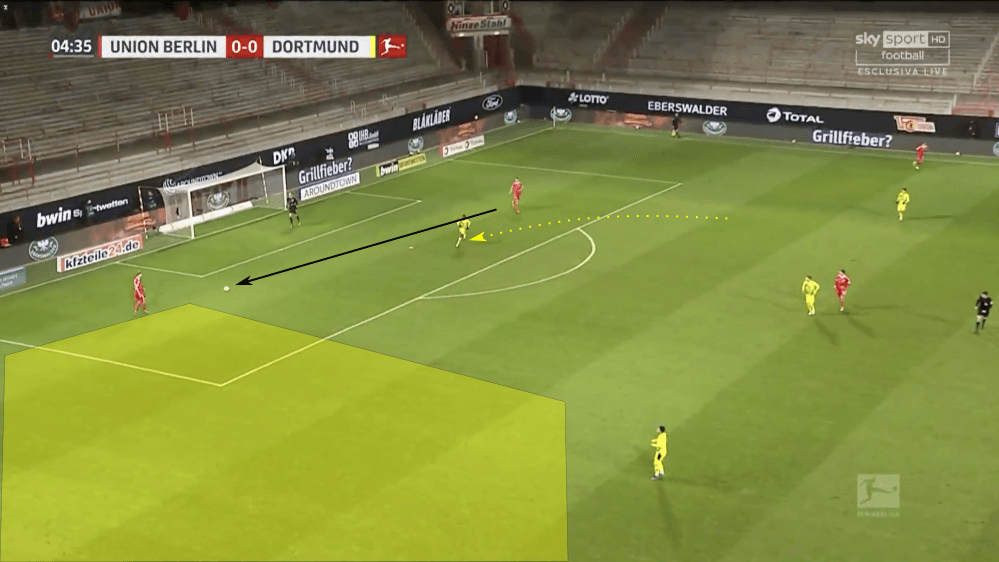 Moukoko started his press by forcing Knoche to make the play more predictable. His only option was to play the ball to Friedrich, who was open in lots of space. Because of Moukoko’s pressing action, Friedrich did have a lot of room to operate. However, Dortmund were able to eliminate two passes (back to Knoche or to the goalkeeper) with one player. This meant that Freidrich had to go forward into that space. Dortmund didn’t need to press him there – they could simply eliminate his passing options and force him to play long, which is exactly what he did.

Early in the match, Union attempted to solve Dortmund’s press before ultimately settling for long balls into the centre of the pitch. Below is an image highlighting Dortmund’s movements as Union played back to their goalkeeper. 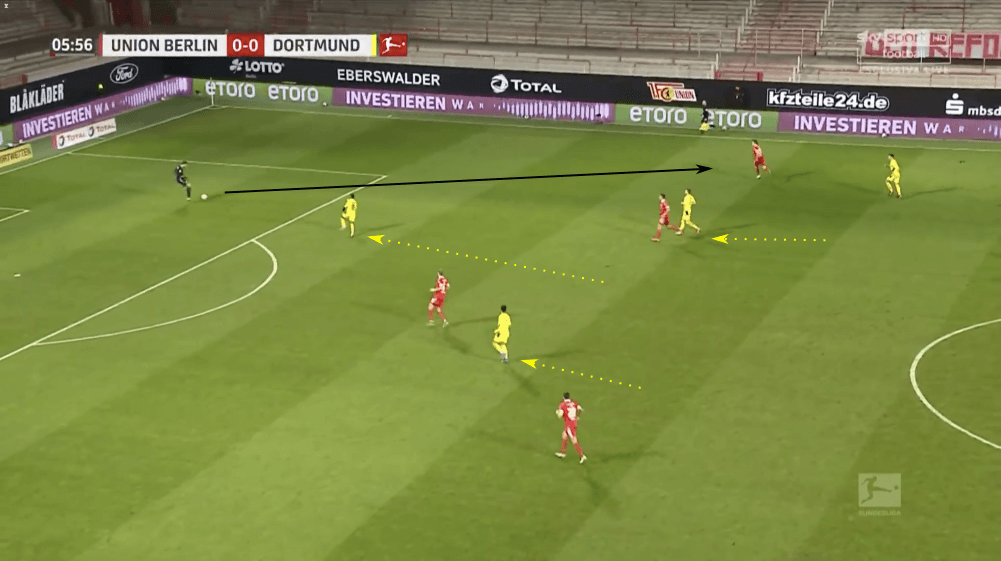 Moukoko once again eliminated a half of the field for the goalkeeper to play into. Sancho and Reus both stepped up with Reus touch-tight on his man, eliminating him as a potential passing option. Sancho didn’t need to be as close because of Moukoko’s cover shadow eliminating his man as a viable passing option. Meunier, at the top of the image, was baiting the pass to the outside player. He gave him enough room to receive but was in an ideal position to press as he could close him down quickly and the man was showing Meunier his back. When the ball was played to him, Meunier pressed immediately, forcing the ball back to the goalkeeper, who had no choice but to clear it up the pitch.

When Union looked to progress up the pitch, in the case below with Friedrich, they found their passing options limited. 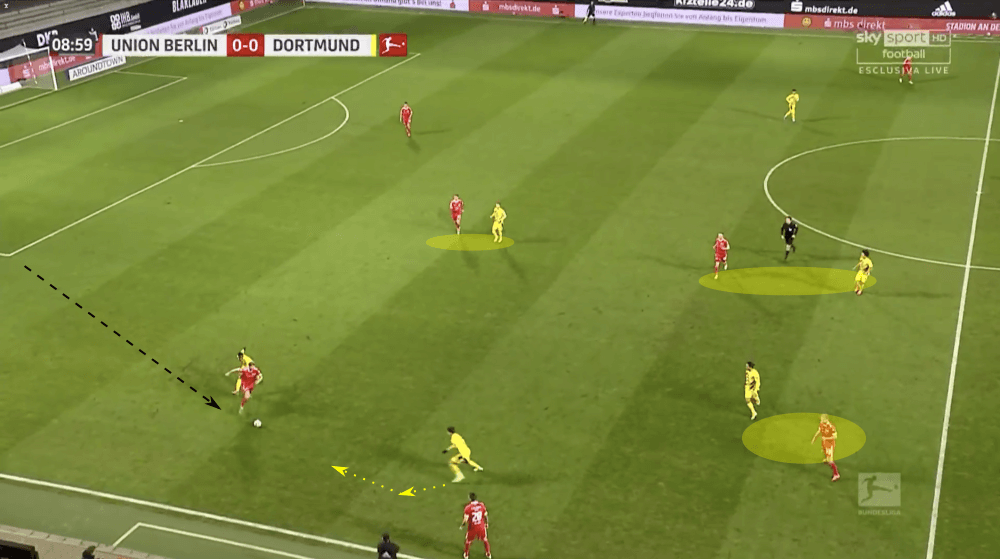 With a similar movement to the first image, Freidrich found himself in a large amount of space due to Moukoko’s initial pressing movement. He chose to dribble this time towards his right-back, with Moukoko providing pressure as he did. By the time he tried to pick out his pass, Dortmund’s structure had essentially eliminated his options. Gio Reyna blocked the right-back as an option with a well-chosen run before providing additional pressure on Friedrich. Can, Witsel, and Reus all closed down their men, eliminating them as passing options. Reyna’s pressure caused a deflection and the movement ended with an open Jadon Sancho in the area, but his poor finishing let him down. 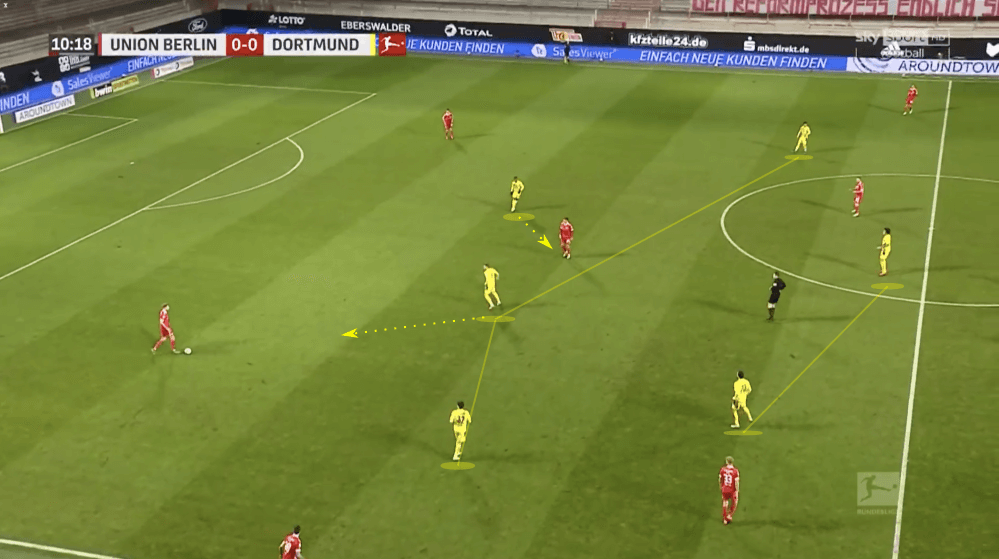 When Dortmund found more of a mid-block defensive structure (especially once Union stopped trying to play out of the back), they still found their 4-2-3-1 shape. Reus (who was playing as the 10) and Moukoko made sure to coordinate their movement to prevent passes into Union’s defensive midfielder, while the rest of the attackers looked to block vertical passes, with Can and Witsel filling in the gaps between the three players in front of them. This defensive set-up worked for the most part, with a lot of Union Berlin’s chances coming from counter-attacks or balls won after counter-pressing.

While Dortmund were well-organised in defence, they seemed to struggle a bit more in terms of their build-up, which obviously affected how frequently they could get forward. Dortmund saw a large majority of the possession (71% of it) but they were unable to convert that into many meaningful chances. The struggle started with their build-up and continued up the pitch. Below is an image of Dortmund trying to get through Union’s mid-block. 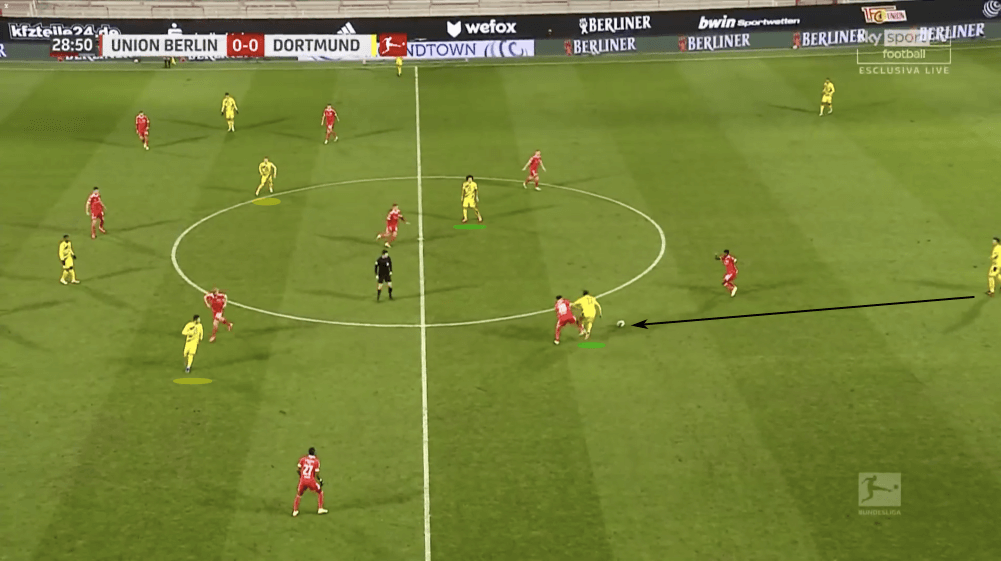 The centre-backs, Hummels and Akanji, were provided room to operate, with Union preferring to mark the men who would receive the ball. The angles of the players higher up the pitch (specifically the defensive midfielders and the three teammates in front of them) made it difficult to play through the centre. First, Can and Witsel (both marked in green) positioned themselves between two sets of defenders. There isn’t anything inherently wrong with this positioning — they’re attracting the defenders’ attention. However, ahead of them, Reus and Reyna are quite vertical. They’re not able to provide any support if they receive the ball in a good position, and so they take themselves out of the play. While the full-backs were providing width, the lack of passing angles in the centre of the pitch prevented Dortmund from being able to progress the ball. 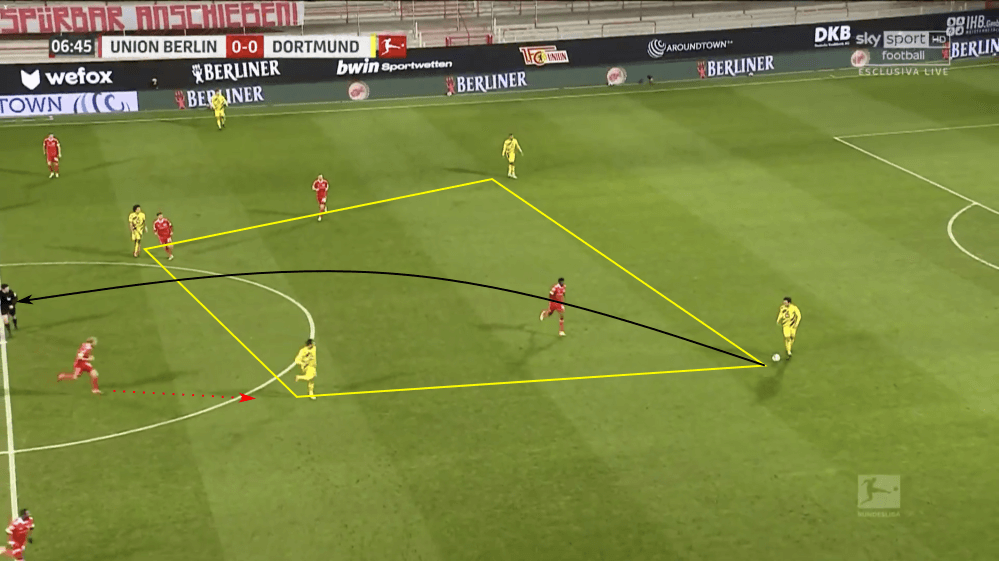 Throughout the match, Dortmund continued to find this trapezoid-like shape which saw both defensive midfielders closer to one another than their corresponding centre-backs.  This made Union Berlin’s first line of defence easier as they wouldn’t be required to run as much in order to prevent passes into those players. Instead, they could easily shift and prevent any build-up through Can or Witsel. The only benefit from this is that Can and Witsel could attract the attention of the defenders behind them. This meant that when players like Reyna or Reus would drop into the half-space, they would be followed by a full-back. In the instance above, Hummels was able to send a long pass to Moukoko, who could attempt to hold the ball up and lay it off for teammates.

Dortmund were able to find success when they would effectively rotate, distracting opponents long enough to create time and space to play through them. One example is shown below, which saw Reus and Witsel rotate, allowing Witsel to receive the ball in a wide position. 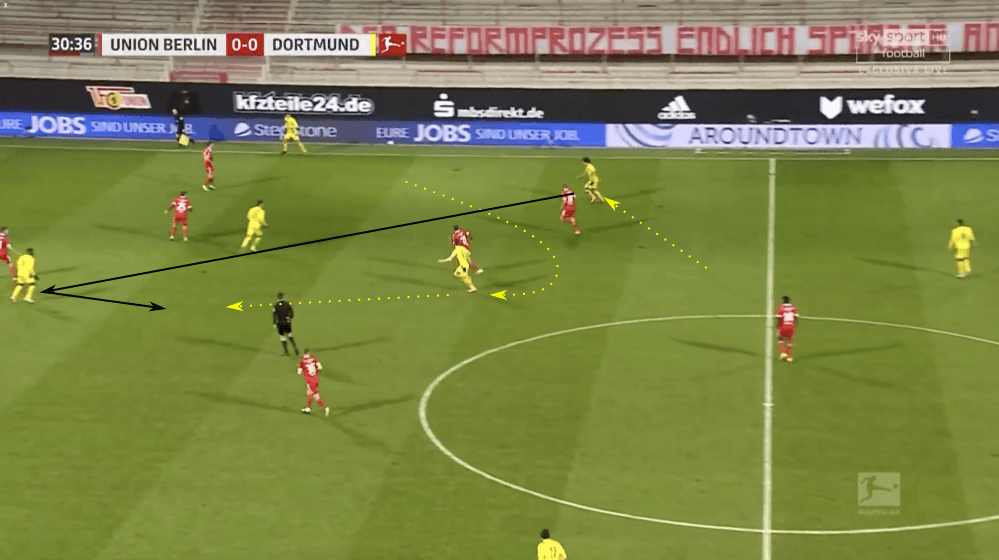 Witsel had time on the ball because Reus’ movement did enough to distract the man who was marking Witsel. From there, Witsel was able to play a diagonal ball into Moukoko, who laid the pass off for Reus. By finding Reus as the ‘third-man’, Dortmund now had a player in a dangerous area who was able to see the majority of the field. While Reus’ through ball bounced off of Sancho’s heel, they had still figured out how to gain access up the pitch.

Later in the second half, Dortmund found success by again dragging opponents and creating space. Witsel made a similar run as he had in the previous image, although this time Guerreiro had made a similar movement higher up the pitch. Witsel’s defender thought he was protecting the space behind him (and preventing a pass into Guerreiro), but he actually allowed Guerreiro to receive the ball. 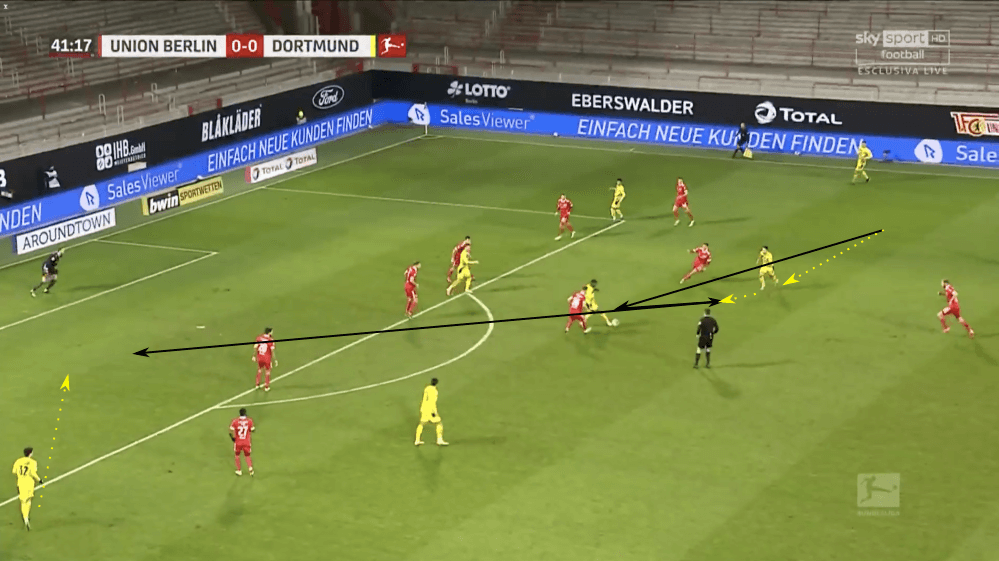 From there, Guerreiro was able to play a give-and-go pass with Moukoko. As he did, Reyna recognised the space opening up behind and timed his run to receive the ball. Guerreiro slotted it through but ultimately overhit his pass, and Union’s goalkeeper was able to receive it. While not perfect, Dortmund’s success came from the coordinated movements of teammates that disoriented and distracted opponents.

As previously mentioned, Union Berlin did not have much of the possession. Instead, they looked to remain compact and hit Dortmund on the counter. This style also meant that they counter-pressed and looked to take advantage of any set-pieces. This ultimately earned them all three points as both of their goals were scored from corner kicks. Their first corner saw them exploit space that they created at the far post. 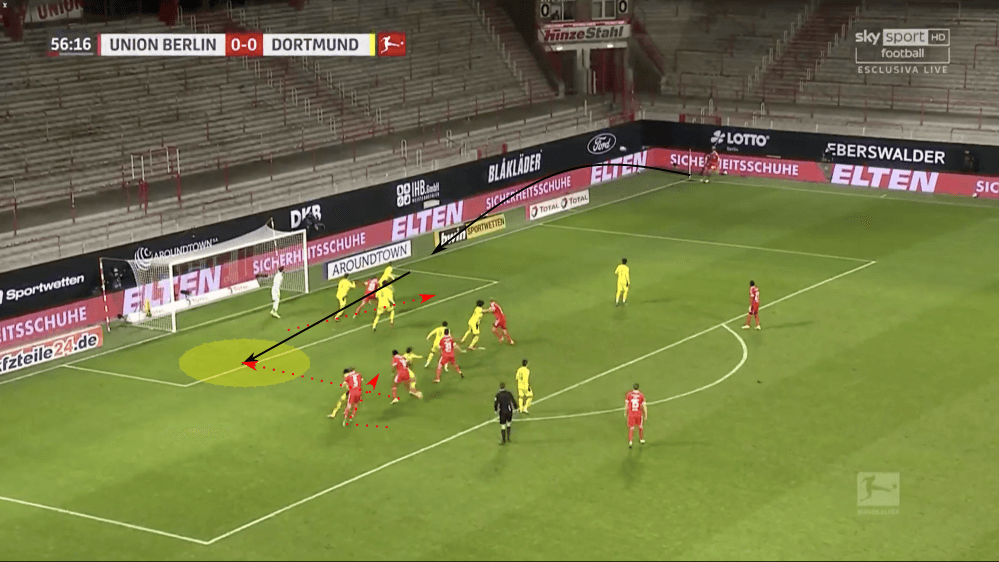 Griesbeck was the man who won the flicked header and the near post. His movement started with him between three Dortmund defenders near the goalkeeper before he sprinted out to the near post into the space. His header took a looping cross and turned it into a bouncing ball within the six-yard box. As he made this run, Friedrich and Awoniyi looked to manipulate their defenders by crossing paths closely to one another. Friedrich started his run towards the outside, but cut in sharply, looking to run his man into Reyna, who was marking Awoniyi.

This actually created space for Fredrich to head the ball, but it never came to him. Awoniyi did well to shake Reyna – he essentially caught him flat-footed. He was able to do this by using a small feint to his right before exploding to his left, flying past Reyna and finding himself wide open on the back post, where he finished off Griesbeck’s headed pass. 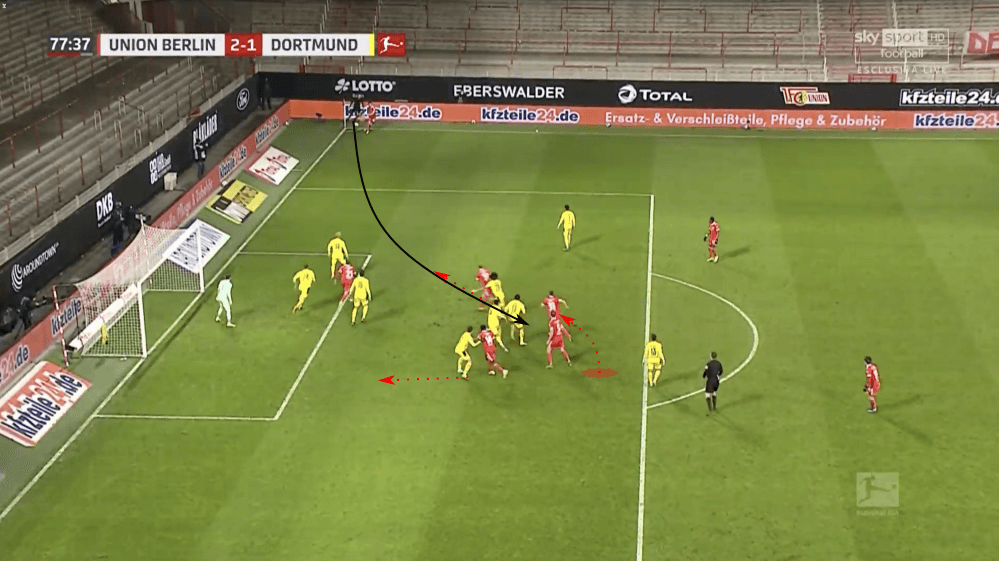 Union Berlin’s second goal came from a similar set-up on a corner kick. Again there were crossing runs and the manipulation of defenders in order to get Friedrich open. The runs on the outside were made by Awoniyi and Griesbeck, opening space for the most important run: Knoche’s. Knoche started behind Friedrich and was marked by Akanji. Knoche ran to the right of Friedrich, drawing the attention of Can, who was marking Fredrich. Akanji and Can were unable to switch off, so they both followed Knoche as he burst forward.

In the image above, it’s clear both Akanji and Can are looking directly at Knoche. This created a large amount of space for Friedrich, who was able to see the cross come in and bury it into the back of the net, earning all three points for Union Berlin in the process.

While Terzic was brought in on an interim basis, Dortmund supporters will still expect the squad to earn a spot in next year’s UEFA Champions League. While his 4-2-3-1 certainly has opportunities to get Dortmund into the half-space, they’ll need to be better-drilled if they want to find success against pragmatic sides like Union Berlin. Both squads have DFB-Pokal matches scheduled on Tuesday before a short break. Their next Bundesliga matches are at the New Year’s Day weekend, with Union playing Werder Bremen and Dortmund taking on Wolfsburg.