Bayer Leverkusen welcomed Borussia Mönchengladbach to the BayArena for the Bundesliga match for Matchday 7 on Sunday. What was certainly billed as an exciting game delivered just that, as the two clubs battled to potentially fight for fourth place in the table. While both teams had plenty of opportunities, Leverkusen was able to come away with the 4-3 victory. 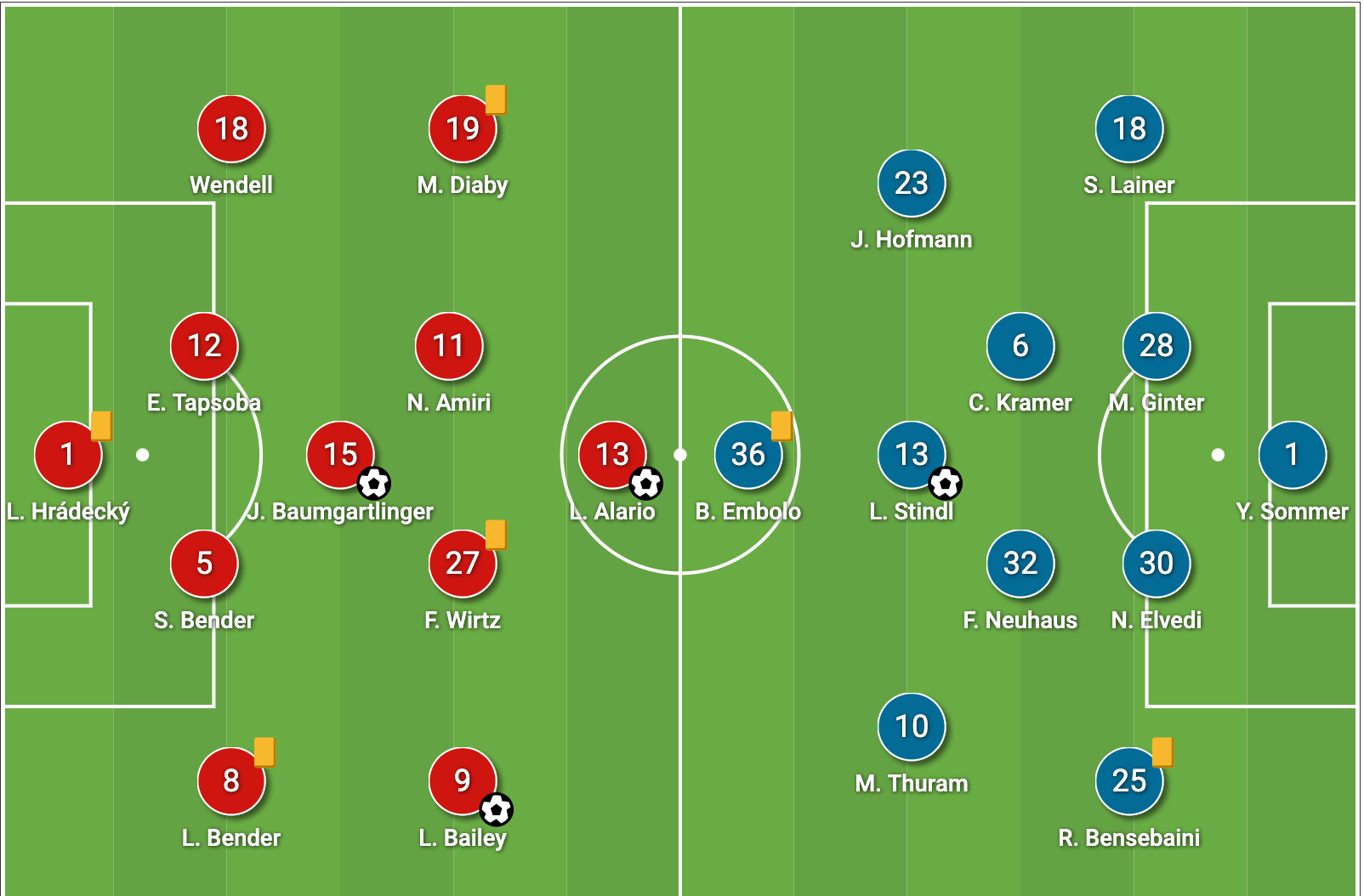 Bosz sent Leverkusen out in a 4-3-3 with Lukáš Hrádecký in goal. Their two centre-backs were Edmond Tapsoba and Sven Bender with Lars Bender as right-back and Wendell as the left-back. Julian Baumgartlinger, Nadiem Amir, and Florian Wirtz started in the midfield, with Baumgartlinger featuring as the defensive midfielder. Leon Bailey and Moussa Diaby started on the right and left side, respectively, with Lucas Alario starting as the striker.

Marco Rose sent Gladbach out in their 4-2-3-1 with Yann Sommer in goal. His centre-back pairing consisted of Matthias Ginter and Nico Elevedi with Ramy Bensebaini on as left-back and Stefan Lainer as the right-back. The two holding midfielders were Florian Neuhaus and Christoph Kramer with Lars Stindl starting in front of them. Marcus Thuram started on the left side while Jonas Hofmann started on the right, both supporting Breel Embolo, who was Gladbach’s striker.

Bayer Leverkusen had most of the possession in this match with a total of 59%. They used the possession to try and move Gladbach’s defence and exploit available space. They were most effective in doing so when attacking down the right flank, focusing on the left side of Gladbach’s defence. The majority of the time, they looked to get players (mainly Ramy Bensebaini) out of position to exploit that space. 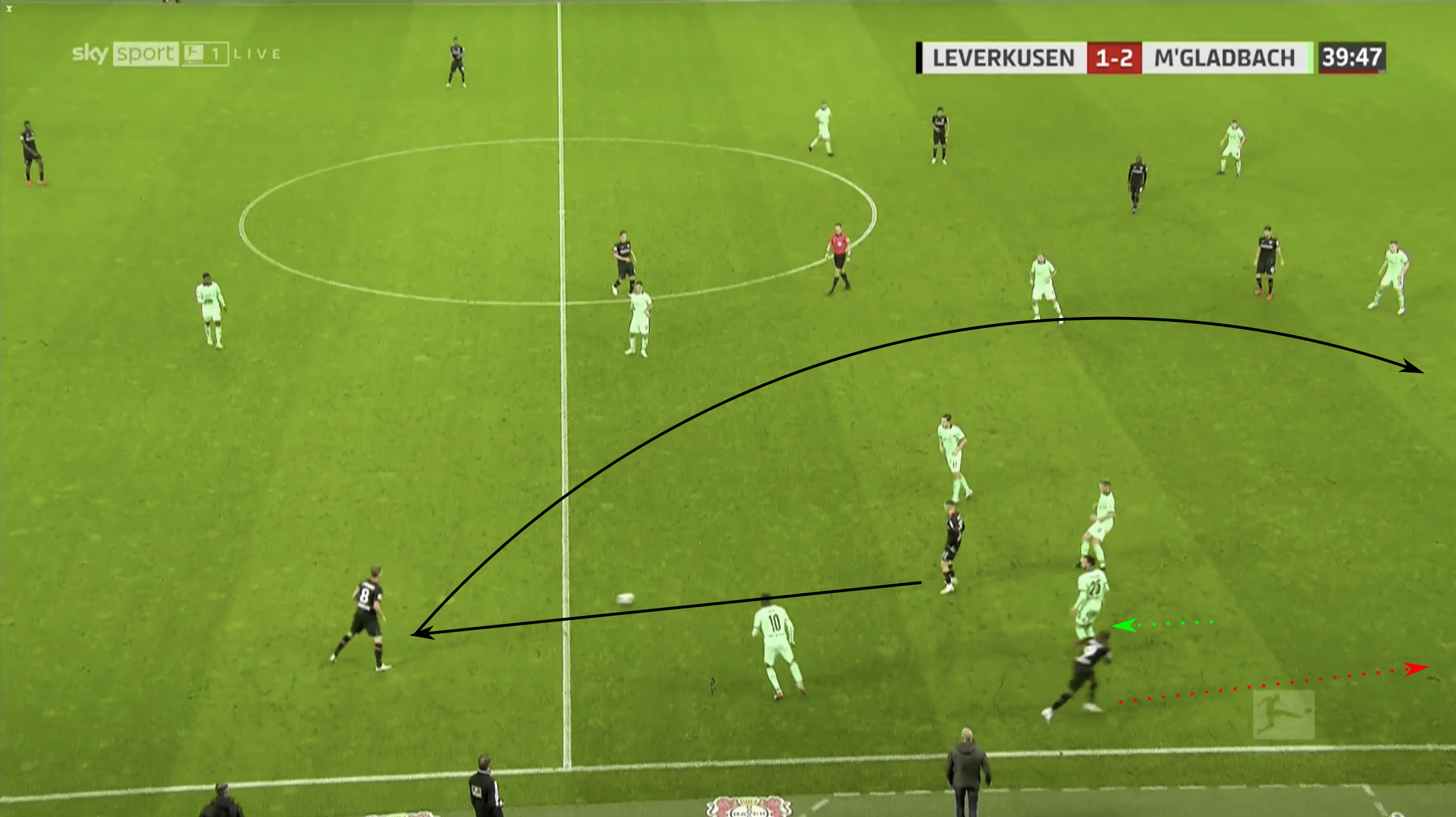 Bensebaini was caught out multiple times, but for the majority of the first half, he did well to protect his space and follow his defenders. However, as the match continued, his discipline dropped, and he became more error-prone, which Bayer Leverkusen looked to take advantage of. In the image above, Bensebaini was pressing his man (Bailey) who had laid the ball off. As the ball went backwards, Bensebaini stepped forward more, despite the large amount of space behind him. Bailey ran in behind and had a lot of room to receive the ball. While he was eventually pressured by Ginter, Ginter had to leave the centre of the pitch, opening up a lot of room that could have been exploited had the initial pass been better. While not an egregious error, it began a trend of Leverkusen attacking down their right side.

In the second half, Leverkusen established positional superiority on the right side, which helped them get through and behind the defence despite being outnumbered. Off of a thrown-in from Lars Bender, Leverkusen looked to progress the ball with vertical passes. 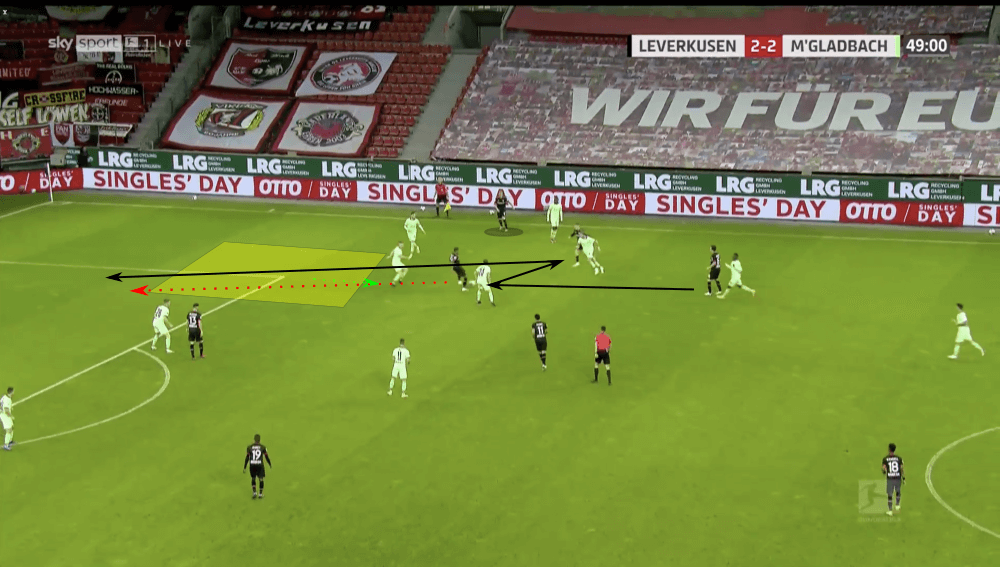 The two men in the half-space, Wirtz and Bailey, combined after Bailey had received the pass from Baumgartlinger. Bender quickly stepped into play, which ‘pinned’ Bensebaini and kept him occupied. This meant that Elvedi was forced to pressure Bailey, opening up the space in behind him. Bailey used his speed after laying the ball off, and Leverkusen was suddenly able to deliver a back-cross from inside the high-assist area. All of this was made possible because the Leverkusen players were able to make room for themselves in the half-space to receive the ball, checking away from defenders and creating enough space to operate. While they weren’t able to score, it was clear that they were targeting both Bensebaini and Elvedi.

This targeting of the right side continued with Leverkusen’s third goal. Despite the pass coming from the left side on a counter, Bailey and Alario both set up the goal by occupying the attention of Elvedi and Bensebaini. 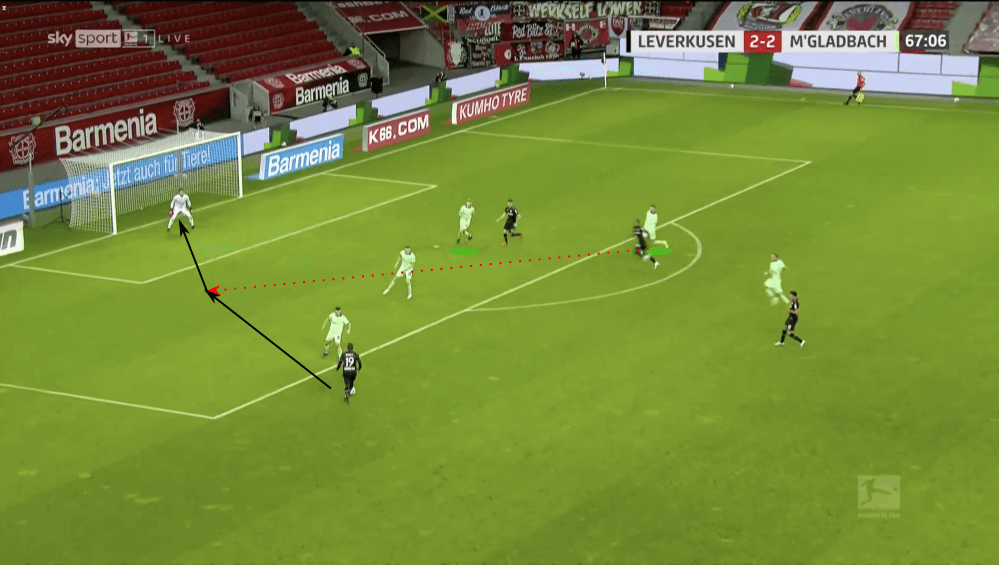 Leverkusen had won possession in their own third when Wirtz curled a beautiful pass to Diaby that spanned the length of the middle third. Diaby was able to enter the final third with his dribble as both Elevedi and Bensebaini were occupied by attackers. Bailey made a great run that initially started wide and eventually went behind Ginter. While Bailey had gotten in front of him, Bensebaini, no stranger to pace himself, should have been able to catch up with him. However, once Bailey ran behind Ginter, Bensebaini stopped following him, allowing him to receive the ball in space and slide it through Sommer’s legs for their third goal of the match. Elevedi was unable to switch off to mark him as he was occupied  by Alario, and there was no way Ginter could have caught up to Bailey as Bailey had a clear dynamic superiority. Bensebaini was the only man who could have potentially stopped Bailey, and his inability to track back properly cost Gladbach a goal.

Leverkusen’s match-winning goal came off of another attack down the right side, which started after a corner kick. Bensebaini had two men to mark in the half-space, and so he arrived late on the ball as Bender received it. 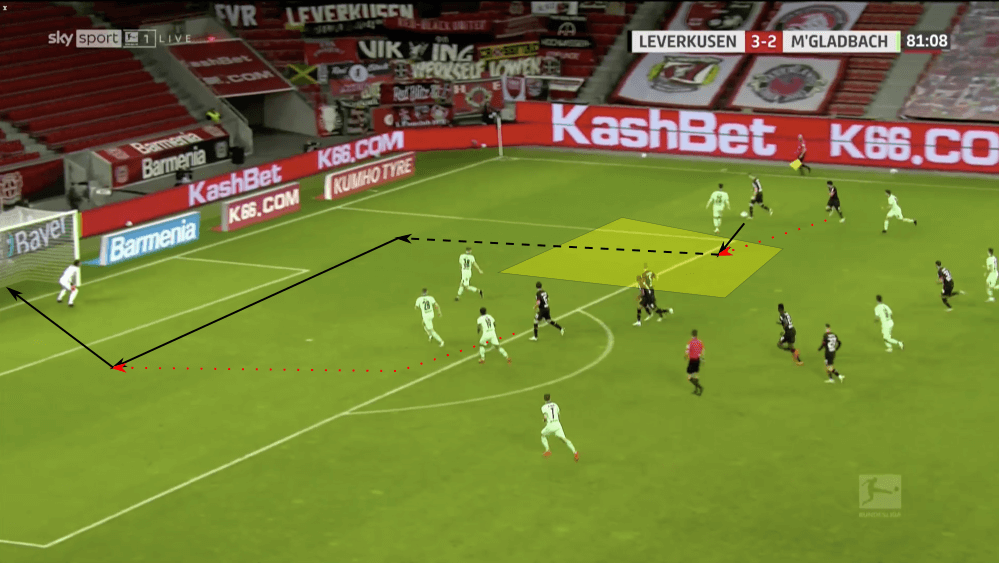 As seen above, a large amount of space had opened up between Elvedi and Bensebaini, which Almiri recognised and attacked. Bender slipped a pass right into Almiri as he ran through that extended half-space. Almiri, who was unmarked, took one touch before blasting the ball across the face of goal. The large number of attackers in the box was overwhelming for Gladbach, and Thuram followed Bailey’s near-post run, allowing Baumgartlinger to slip through and smash home the pass.

Leverkusen also looked to use their press to force Gladbach into making long clearances. While Gladbach had faced this before, especially against Inter in the Champions League, they had been able to escape this previously through the use of a long ball into Thuram as an exit strategy. This option wasn’t as readily available against Leverkusen as they were willing to commit men higher up the pitch, which included their backline. 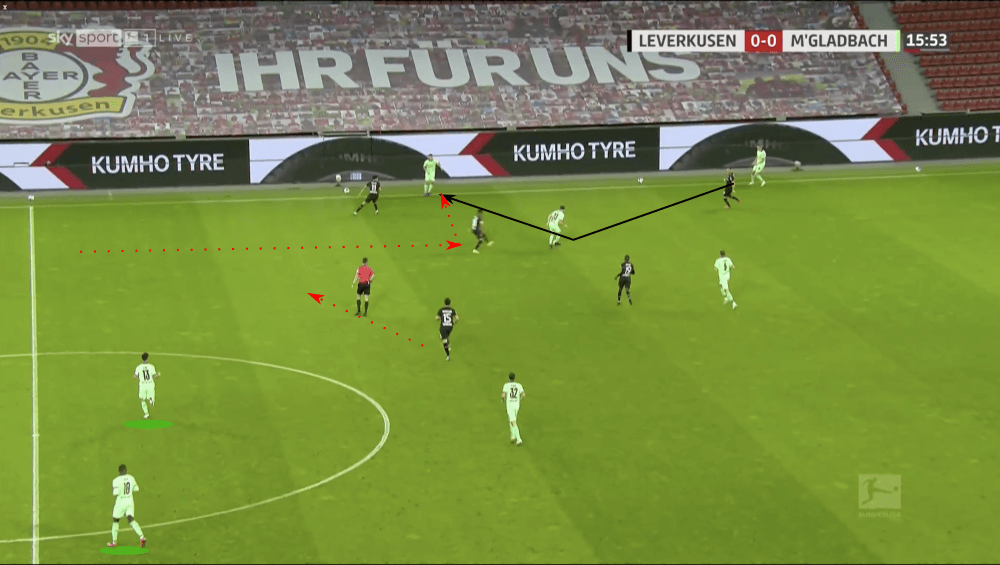 Leverkusen’s commitment to sending men forward up the pitch was clear from the beginning of the match. In the image above, Wendell followed as Hofmann checked back to help his team achieve a numerical superiority. While this did leave a large amount of space open behind Wendell, Leverkusen still had a 3v2 advantage against the two highlighted Gladbach players, Stindl and Thuram. Baumgartlinger would also shift over to deny entry to the centre of the pitch with his covershadow, meaning that Gladbach couldn’t progress anywhere. In this instance, Wendell pressed well and got the ball out of touch quickly.

Leverkusen committed to pressuring Gladbach and used Alario and Wirtz (albeit sometimes Amiri) to provide the first pressure on Gladbach’s back line. 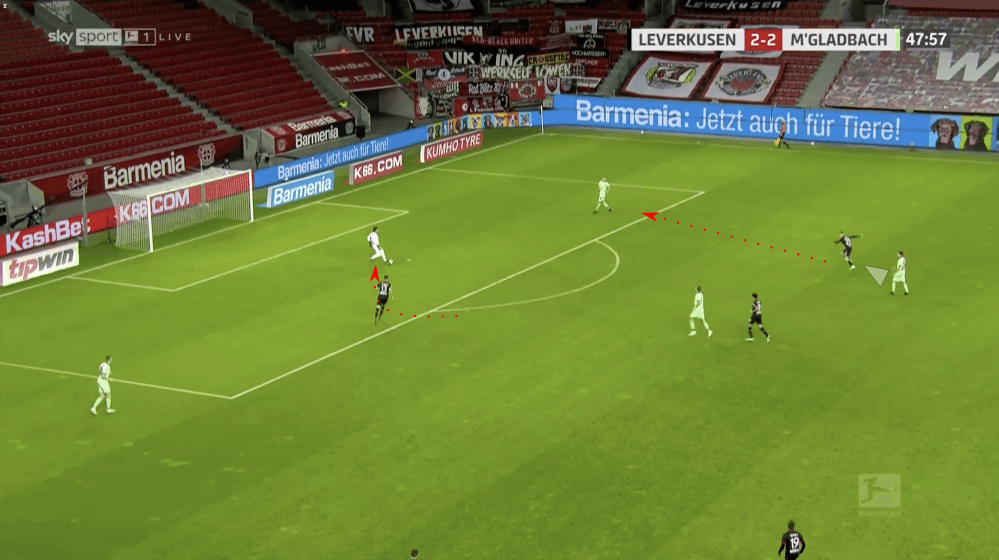 This image highlights how Leverkusen began their pressing. They would use either Alario or Wirtz to pressure Sommer, forcing him in a specific direction. Above, Alario curved his run, setting up the pressing trap. As Sommer turned to play Elvedi, Wirtz, who is quite quick, began his sprint. As he did, he used his covershadow to prevent passing any pass to Neuhaus, who was temporarily unmarked. This meant Elvedi would have to go to his left. His only option there was Bensebaini, who was marked by the pacey Bailey. Elvedi had no choice but to send the ball long, which Leverkusen won quickly. This simple but effective structure allowed Bayer Leverkusen to force play long with fewer players, which is obviously an advantage. 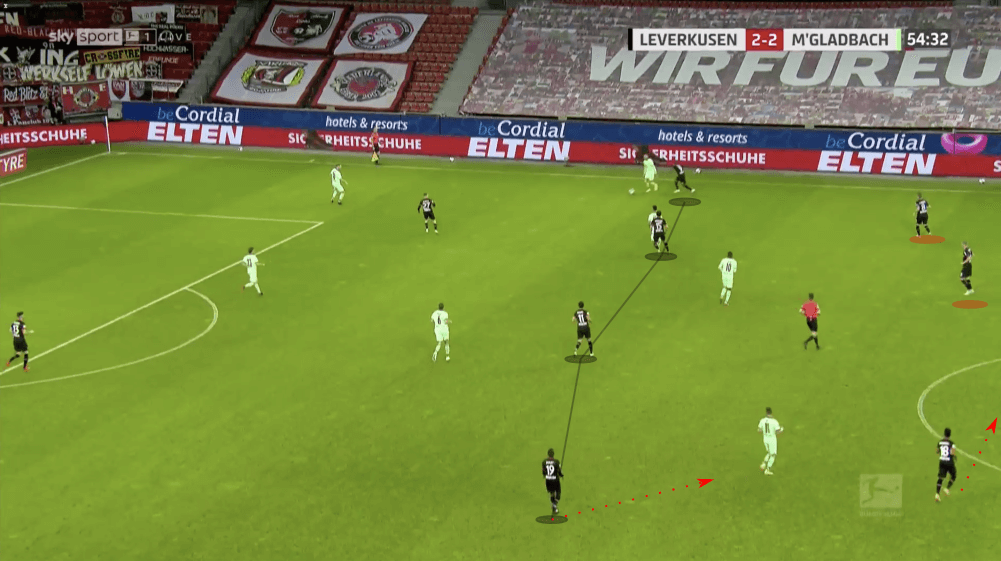 When the wide player did have the ball, be it Bensebaini or Lainer, Leverkusen found this shape above which can look like a 4-4-2 although that’s mostly irrelevant. The more important pieces to notice are the passes Leverkusen were eliminating. Kramer and Hofmann, the two defensive midfielders, were both marked, meaning they’re not good passing options. Thuram had dropped down and was between the lines of pressure. However, both Sven and Lars Bender had stepped forward in response. Lars Bender, the right-back, eliminated any potential passes into the vertical space, and Sven Bender, the right centre-back, prevented any potential pass into Thuram. As both Benders stepped forward, Wendell filled in on the back line and Diaby covered Hannes Wolf. Hofmann ended up dropping to receive the ball, but all he could do was turn and send a long pass towards Lainer because he was immediately put under pressure by Alario.

While it’s not as simple as a numerical overload, Bosz plan to use his squad’s pace to provide pressure made it incredibly difficult for Gladbach to progress forward. The speed and the willingness to commit defenders higher up the pitch meant Gladbach often had nowhere to go, resulting in them losing possession more frequently than they would have liked. 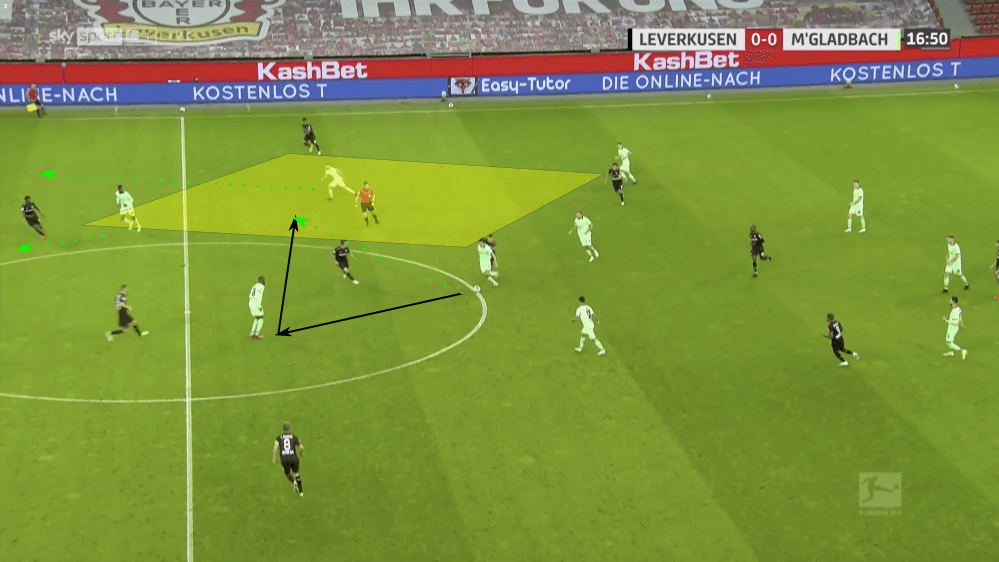 Leverkusen was actually progressing as Kramer and Neuhaus pinched into the centre of the field, looking to protect the space behind them. This led to Kramer essentially having the ball played to his feet by the opposition. Kramer’s first touch was to Neuhaus, who had Thuram open. As Neuhaus played Thuram, Embolo and Hofmann released, dragging their defenders with them. This opened up room for Neuhaus and Thuram to play a simple give-and-go, allowing Neuhaus to then have time and space on the ball. He slotted Hofmann in, who crossed the ball to Embolo, who was brought down in the area. Stindl finished off the ensuing penalty kick, and Gladbach had found a way back into the match.

Later in the match, Gladbach again located a free man in the middle of the field, but this time they were unable to progress the ball successfully. 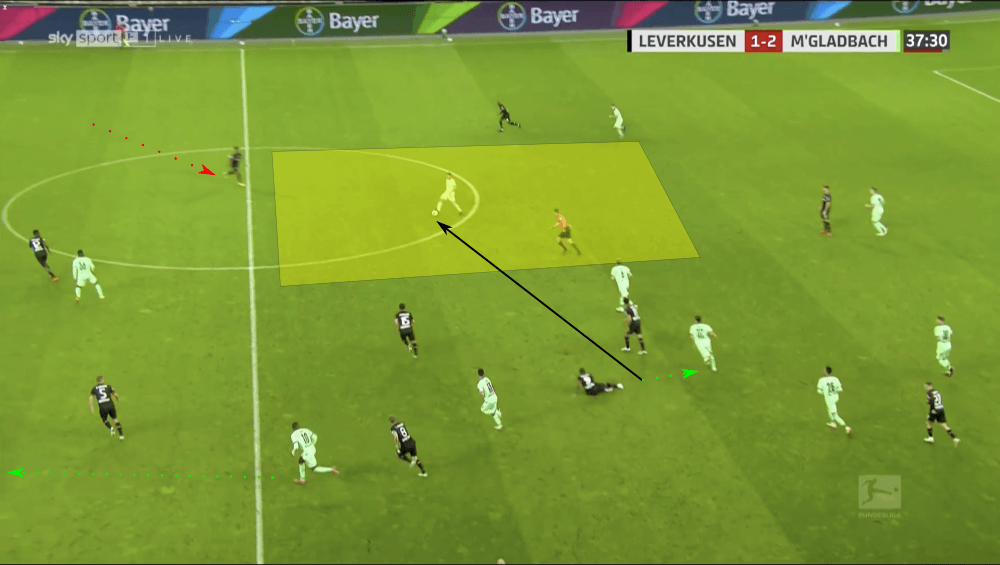 On the right side of the pitch, the Gladbach players had collapsed on Bailey as he tried to dribble out of pressure. Neuhaus found himself on the ball and was able to quickly ping a pass to Stindl, who had found a large amount of space in the middle of the field. As the ball was played, Wendell, Leverkusen’s right-back, pressured Stindl. This created a 2v2 with Gladbach’s attackers and Leverkusen’s two right-sided defenders. Stindl’s ball never found Embolo’s feet, but there would have been a 3v2 scenario because Stindl had a dynamic superiority against Wendell. Unfortunately they were unable to take advantage of these opportunities despite finding them throughout the match. Not highlighted was their second goal, which came from a misplaced pass from a Leverkusen player to Embolo, who was in the centre of the pitch and did well to quickly get his team forward into Leverkusen’s penalty area.

While Valentino Lazaro did score one of the more impressive goals of the year, it wasn’t enough to get Gladbach into the match. Gladbach will likely be frustrated with the result, having dropped points against a club that is vying for a UEFA Champions League spot alongside them. Both clubs face the international break before returning to play, with Gladbach set to take on Augsburg in their first match back and Leverkusen taking on Arminia Bielefeld. Both matches will take place on the 21st of November.