The current situation for Borussia Dortmund and Augsburg before the first matchday of the new season couldn’t be more different. Lucien Favre’s team beat Bayern in the German Super Cup 2-0 and got away with a victory in the first round of the DFB Cup against Ürdingen. In addition, they bought with Mats Hummels, Nico Schulz, Julian Brandt and Thorgan Hazard – four incredible players. In light of this, it looks like Dortmund will have a real chance to win the Bundesliga. It would be the first time since the season 2011/12 that Bayern aren’t the champion of the Bundesliga.

On the other side, Augsburg had to make a radical change this season after the departures of important players like Kevin Danso, Jonathan Schmid, Ja-cheol Koo or Konstantinos Stafylidis. Besides, they lost their first competitive match against a club from the fourth German division called Verl in the first round of the DFB Cup.

So, everyone expected that the BVB will dominate the game with possession and Augsburg will sit back, try to avoid goalscoring opportunities for the opponent and try to score a goal with one of the few counter-attacks.

This tactical analysis will look at tactics of the two teams and uses statistics and analysis to examine how Dortmund was able to win 5-1.

Martin Schmidt lined his team up in a 4-1-4-1 with their new goalkeeper Tomas Koubek between the sticks, and Mads Pedersen as well as Georg Teigl as full-backs. The central defence was made of another new signing Marek Suchý and the usual defensive midfielder Rani Khedira.

Carlos Gruezo played as the only number six and before him, the midfield four was made of Ruben Vargas, Daniel Baier, Michael Gregoritsch and André Hahn. Vargas is a 21-year-old left winger who joined Augsburg this summer from Luzern who really strived to show what he’s capable of. In some situations, it even got visible but since Dortmund dominated the game as we will see later on in this analysis, he almost had no chances to show his talent, but he could be an interesting player to watch this season. Florian Niederlechner was Augsburg’s only striker.

Favre’s team played in a 4-2-3-1 which never looked that way on the pitch as we will see later on. Marvin Hitz played for the injured Roman Bürki. The back-four consisted of the new signings Hummels and Schulz as well as Manuel Akanji and Łukasz Piszczek.

Axel Witsel and Julian Weigl were the defensive midfielders and Marco Reus played in front of them as number ten. Jadon Sancho and Hazard were the wingers and Paco Alcácer was the lone striker.

As already mentioned, everyone in the Signal Iduna Park and at home in front of the television expected Dortmund to be in possession most of the time and score the first goal. However, Augsburg just needed 31 seconds to score the opener after a great passing combination on the wing and a perfectly timed cross by the left-back Pedersen Niederlechner just had to tap it in.

However, Dortmund didn’t seem to be shocked and it took them just two minutes to score the equaliser. Alcácer was the goal scorer and it was his third goal in his third appearance in a competitive match this season.

Sancho positioned wide to separate himself from Pedersen and Vargas and have more space. As he received the ball, he started to dribble and played a well-timed pass behind the last line of the opponent’s defence and Reus made a powerful low cross into the centre where the Spanish forward was able to score. 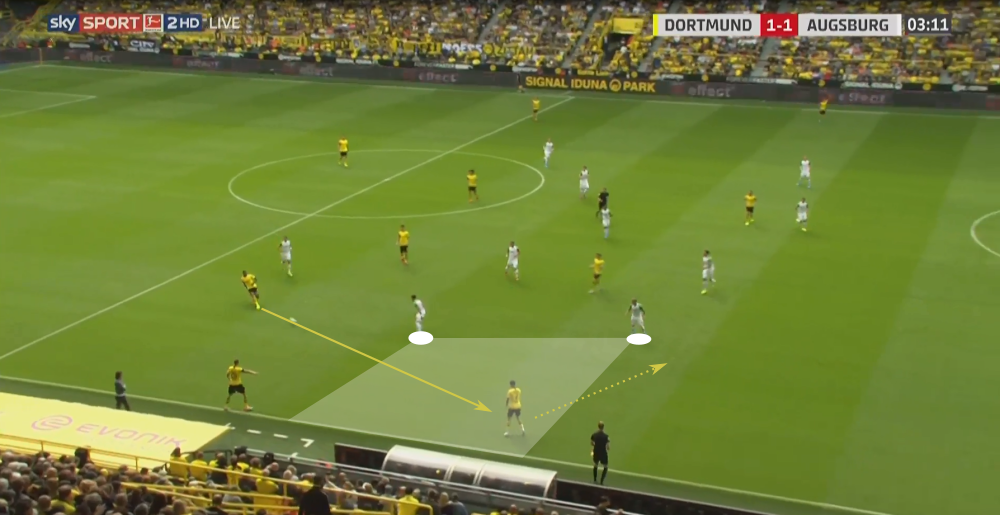 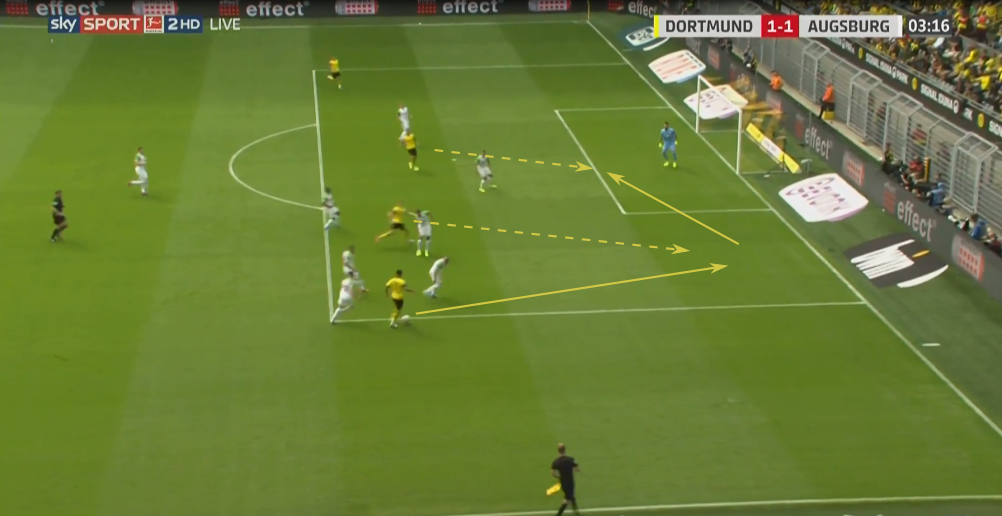 Although, the first ten minutes of the game were very hectic and unstructured what is also a reason for the two early goals. Both defences weren’t organised and in addition, the offensive players of each side attacked their opponents very high up the pitch. You would expect Dortmund to use a high pressing and a counter-pressing as shown in the image below, but it was a bit surprising that Augsburg was that brave to also press in at the BVB so early.

Due to that, both teams hadn’t got any longer periods of possession. Dortmund had on average 5.68 passes per possession and Schmidt’s team just 1.9 during the first 15 minutes of the game. Augsburg used a high man-orientated pressing to avoid that Hummels and his teammates are able to have an organised and calm build-up. This worked well during the first few minutes of the game but during the rest of the first half and the whole second half of the match, they just sat back and defended very deep as we will see in the following paragraphs.

Dortmund’s domination without any outcome in the first half

During the build-up, Dortmund transformed into a kind of a 2-4-4 formation since both full-backs pushed up and so the wingers also positioned themselves in the higher line. The square in the centre made of Hummels, Akanji, Witsel and Weigl was responsible for the ball circulation in the first phase of the attacks. Alcácer was always in the centre upfront while Reus had a lot of freedom and either joined the Spaniard upfront or he dropped a bit deeper and also occasionally joined his teammates on the wing.

But we saw two different patterns on the wing of the wide players of Dortmund. On the left side, Hazard often shifted in a few feet to the position in the half-spaces while the left-back Schulz positioned wide and on the same height as the Belgian. On the other wing, Sancho stayed wider than Hazard and Piszczek stayed a bit deeper to not occupy the exact same space. As soon as the young English winger received the ball, Piszczek either stayed in his position to provide an option for a simple back pass or made an overlapping run.

However, as the graphic below showed, Dortmund mainly focused on the attacks over the wings. 14 out of their 17 attacks between the 16th and 45th minute were either over the left or right-wing. Just three of them were through the centre as the graphic shows us.

But how come that they dominated the remaining 30 minutes of the first half although the result was still 1-1 when the referee blew for half time? Their xG was just 0.25 for this period. The main factor why they weren’t able to score the second goal before half time was the quality and precision of their crosses. They delivered in these 30 minutes incredible 14 crosses but just two of them were successful and that’s miserable. Especially Hazard’s crosses weren’t good at all since just one out of five crosses in that half an hour found a receiver in the centre.

In light of this, Dortmund’s plan was to break through over the wings, to then mostly play low crosses into the penalty box to create goalscoring chances. However, when the crosses are as inaccurate as they were in the first half except the one by Reus which led to the equaliser, it’s almost impossible to generate goal threat and that explains their low xG.

Augsburg struggling in the build-up

On the other side, Augsburg struggled throughout the game to have a structured build-up with short passes. As we already saw above in this analysis, Dortmund used a very aggressive counter-pressing as soon as they lost the ball and so Augsburg just had one counter-attack during the whole match.

Furthermore, the BVB also put pressure on Schmidt’s team early during their build-up. Augsburg’s plan was a bit similar to Dortmund’s when we look at their positioning. The two full-backs pushed forward and the two central midfielders Gruezo and Baier stay deeper to support their two centre-backs. However, due to the good pressing by Dortmund which they executed in a 4-4-2 with Reus together upfront with Alcácer, Augsburg weren’t able to have a calm build-up.

Besides, as you can see in the image above, there were almost no short passing lanes when one of the two centre-backs Suchý or Khedira was on the ball. In light of this, the remaining players just positioned high up the pitch and so the logical consequence was long balls since the players on the ball had no other options.

Dortmund’s centre-backs Hummels and Akanji had no problem with these long balls since both are strong when it comes to aerial duels. However, due to the showed lack of short passing options, Augsburg mainly used these long balls which were easily defended by Favre’s team and this led to the fact that Augsburg had just 23.52% possession during these 90 minutes.

The difference in the second half

So, what did Favre change in the half time that his team was able to score four goals in the second half of the match? Some would expect that he changed any tactics or positions of players or even made a change in personnel. However, the Swiss coach told his players to keep playing the same way and try to increase the precision of the crosses.

And that’s exactly what made the difference in the second half. The success rate of their crosses increased from 22.22% during the first 45 minutes to 71.53% in the second half. Except for the 5-1 which was scored by the new signing Brandt, all goals were a result out of crosses. Even though Augsburg’s goalkeeper Koubek made some mistakes ahead of the 2-1 and 3-1 for Dortmund, the quality of their crosses clearly increased.

For example, Witsel’s cross ahead of Sancho’s goal which was the 2-1 for the BVB wasn’t precise and didn’t find a receiver in front of the goal but it was a low cross with a lot of power. These crosses are hard to defend against for the defenders and especially the goalkeeper. In light of this, his cross wasn’t precise but this kind of cross always forces the opponents to mistakes which lead to goalscoring opportunities and this was also this time the case.

All in all, Dortmund deserved the win since Augsburg was too passive except the first minutes of the game. The focus of Dortmund’s upcoming opponents should be the avoidance of crosses and maybe also to have the bravery to press in at Favre’s team higher up the pitch as Augsburg did in the opening minutes of this match.

Because of Bayern’s draw against Berlin, Dortmund is in the first place after the first matchday and they’ll hope to also be there after the remaining 33 matches in the Bundesliga. On the other side, the following weeks will show how good Augsburg really are since a loss on the opening day against such a strong side hasn’t got that much validity.