One of the biggest derbies in the Bundesliga kicked off this weekend’s action, with Hertha Berlin taking on Union Berlin at an empty Olympiastadion. Hertha Berlin as a whole have had a very disappointing season, flirting just above the relegation zone for the majority of the season, and sacking two managers. In their debut season in the Bundesliga, Union are operating at lower expectations but have been an excellent addition to the league, and have largely outperformed their rivals all season.

Hertha however, are on the up at this moment in time, with the appointment of experienced manager Bruno Labbadia seemingly help to inspire Hertha to a 3-0 away win over Hoffenheim last week. Labbadia immediately seems to have inputted some of his tactical plans in his short time in charge, and this game added further credit to this, with Hertha putting on an excellent display in a 4-0 rout. In this tactical analysis, we will assess how Hertha were able to dominate the game and create multiple goal-scoring opportunities, and also take a look at Union’s tactics and defensive approach, and assess what went wrong.

Union Berlin lined up in their fairly common 5-4-1 formation which they sued against Bayern Munich, in which they sat deep and looked to frustrate Hertha before hurting them in transitions. Hertha used a 4-2-3-1, with the two central midfielders Per Skjelbred and Marko Grujić’s positioning a particularly interesting facet in Hertha’s diverse attacking structure. 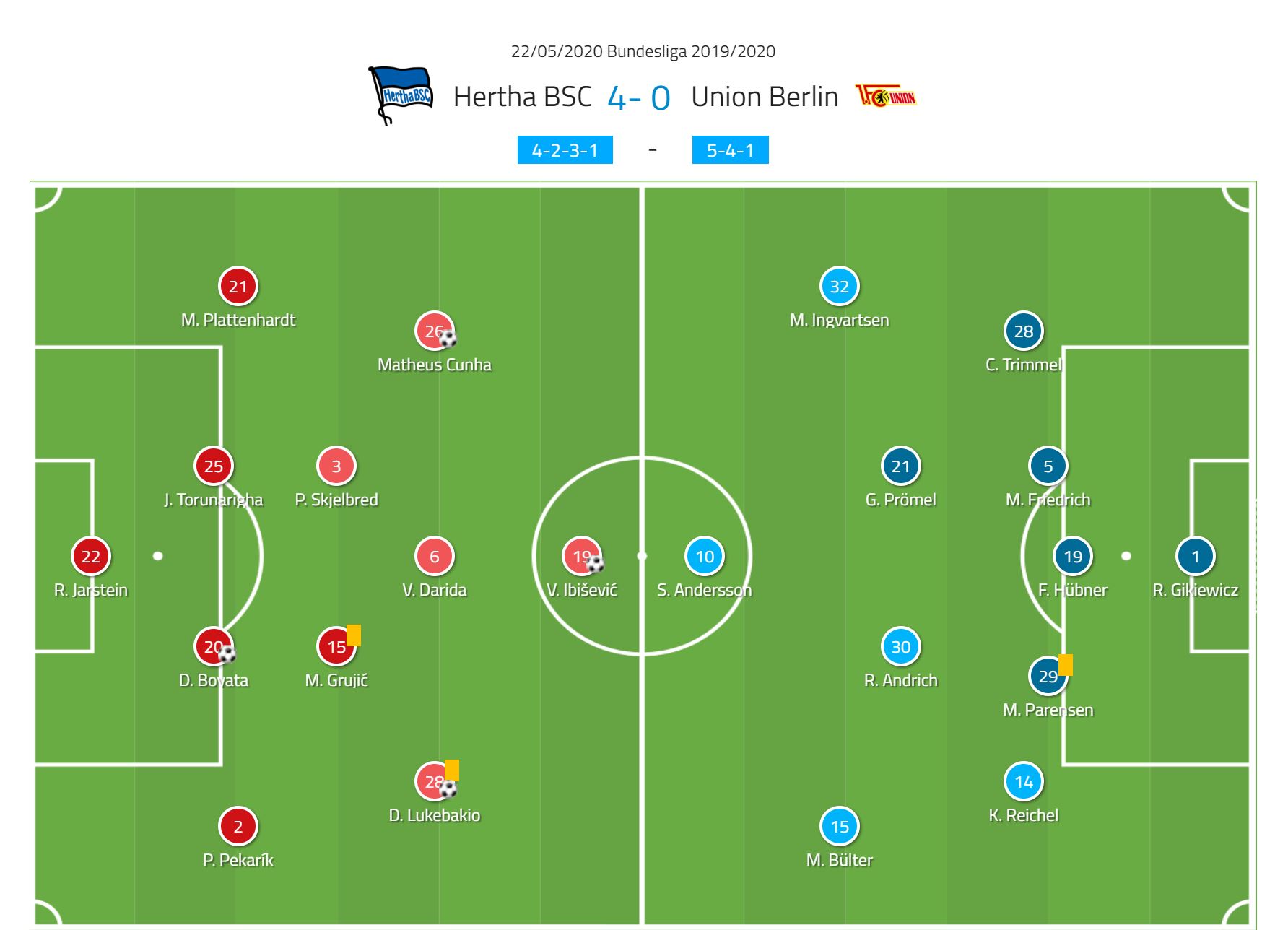 Union had 42% possession in the game, a stat which is largely misleading as we can see below, with Union being allowed more possession of the ball once Hertha had scored their third goal. In general, Union sat in a mid to deep block, and didn’t put pressure on Hertha’s two centre backs until they were around ten yards from Union’s half. 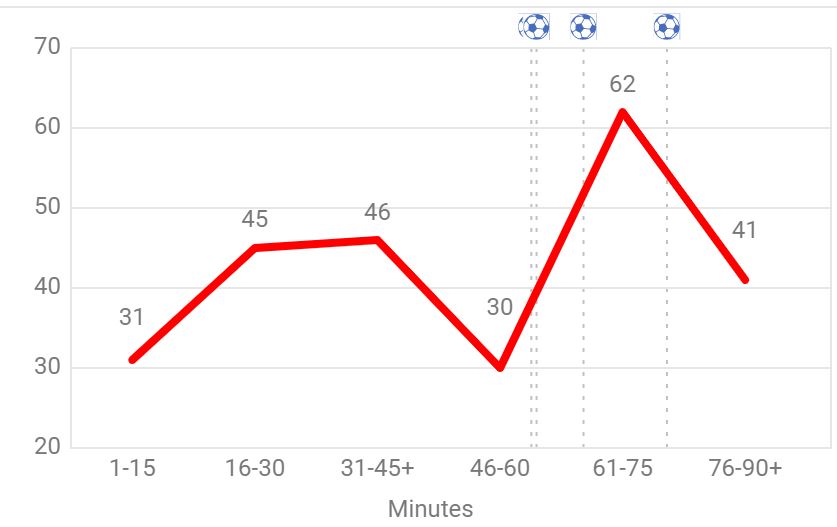 Union pressed in their 5-4-1 for 65 minutes of the game, and we can see an example of their scheme below against Hertha’s 4-2-3-1. Their lone striker would press the nearest centre back if possible, but this wasn’t much of a priority, usually laxly pressing the ball until it was played to the other centre back. If the ball was played to the far centre back, they would be pressed by the nearest central midfielder providing they had cover from their partner in midfield. The central midfielder jumped and looked to keep central options in his cover shadow. The aim of this was to allow Union to keep the winger in a wide area to press the full-back and help protect the half-space. 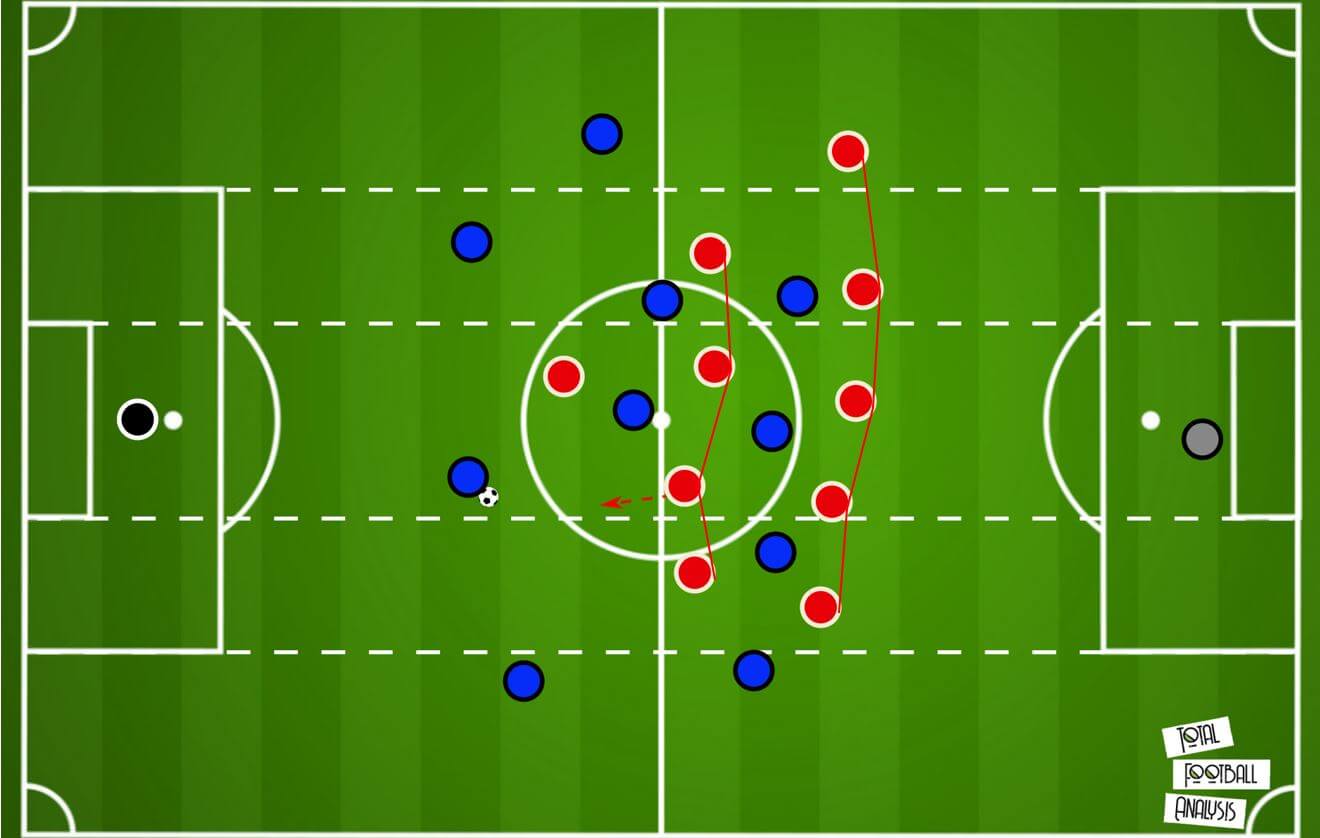 Therefore in deeper areas such as this, the winger would press the full-back as above, with the wing-back able to then cover the winger. Hertha could still access the half-space however by creating a decisional problem for the winger in this scenario, with width provided and central occupation giving the winger two areas to try and cover. 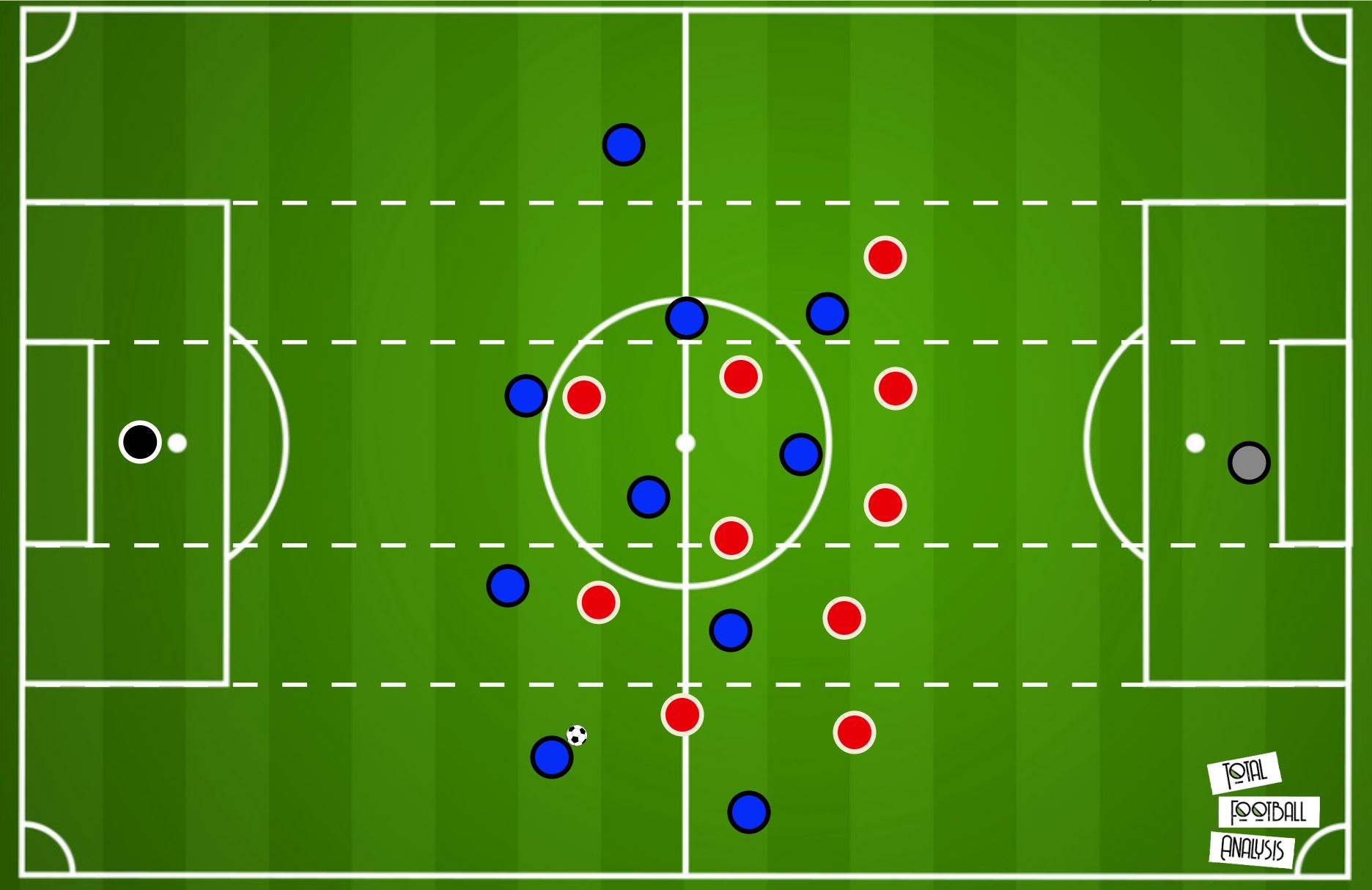 Hertha used multiple rotations in the game in order to aid their build-up, and did so in a way that turned positions within the side into roles, as I’ll explain. The biggest feature in their build-up was the use of their central midfielders as occupiers of the full-back area or deep half-space at times, a tactic Liverpool use often. This is used to allow the full-back to push higher and wider, which in turn both puts them in a higher area to attack from, and also creates width which can be used to increase the size of the half-space. Here the full-back provides width to allow a player to receive in the half-space, where from here they can play inside again. 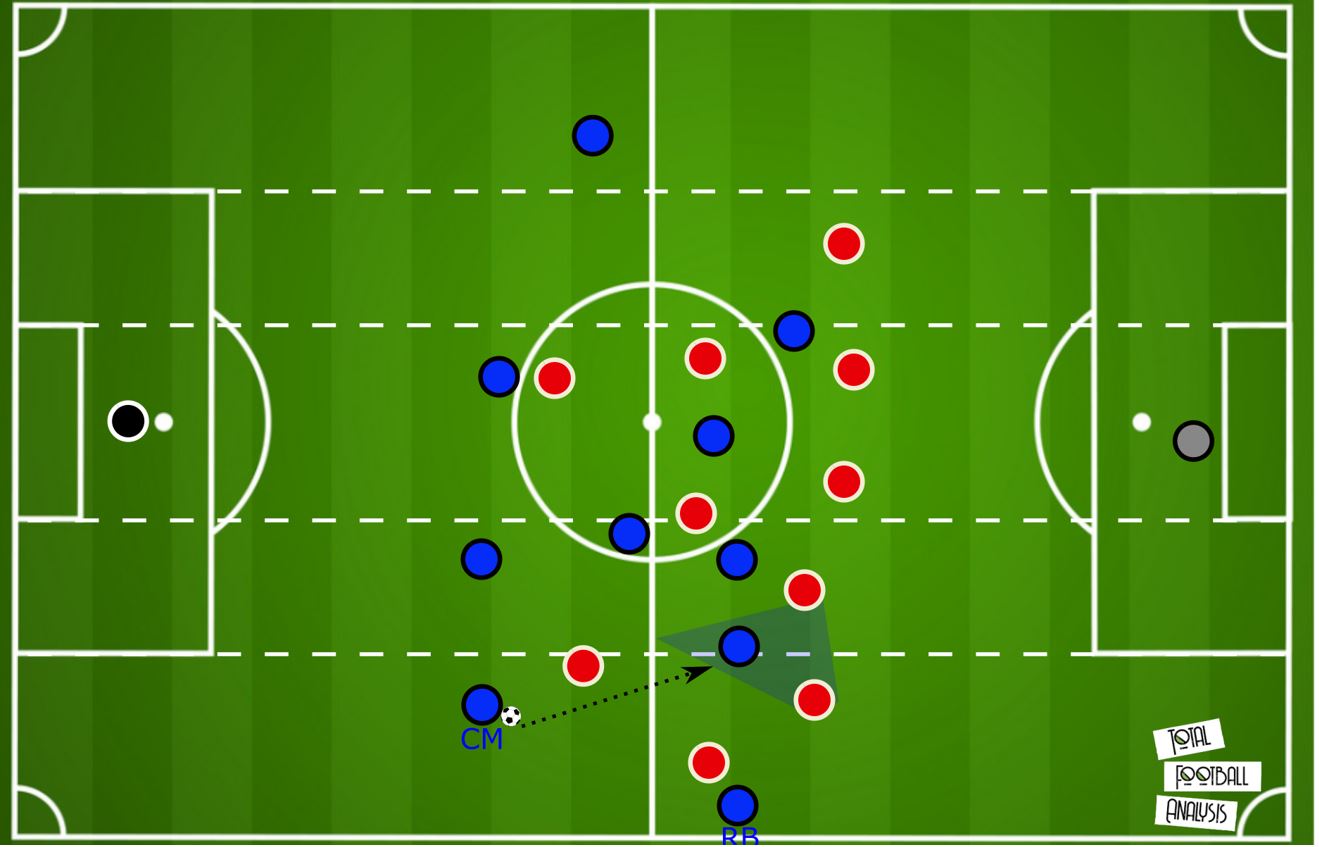 We can see the positional advantage of such a system here in a higher area, where the back line is stretched due to the presence of the full-back in a wide area. As a result Hertha’s wingers become more like inside forwards, or half-space occupiers, while the full-back’s role can be summarised as a width provider.

We can see here the basic principle with the central midfielder pressing. if the winger follows, the second line can be stretched well and access to the half-space can be created, where Hertha would use their inside forwards.

In a deeper area here, we see the same principle. Width is created by another central midfielder in this case, while one of the inside forwards drops to become a half-space occupier. The player occupying the full-back area is, in fact, Dodi Lukebakio, again a part of Hertha’s three in the 4-2-3-1.

In one final example here we see Boyata accesses the half-space, with width provided by the full-back in a deeper area. The inside forward receives and is immediately able to play into a central midfielder, creating an overload in this area. This doesn’t involve rotations but still demonstrates the principles well.

This principle defined most of Hertha’s build-up play, and just by looking at the heat map of Marko Grujić we can see this was a deliberate action by Labbadia, with Labbadia clearly feeling his best hope for success against Union’s defensive block being the access of the half-space and using his full-backs in high areas to deliver crosses. Hertha performed relatively well in this regard, but could perhaps have been more patient or looked to use the central midfielders in the half-space more, as at times they were forced overly wide. 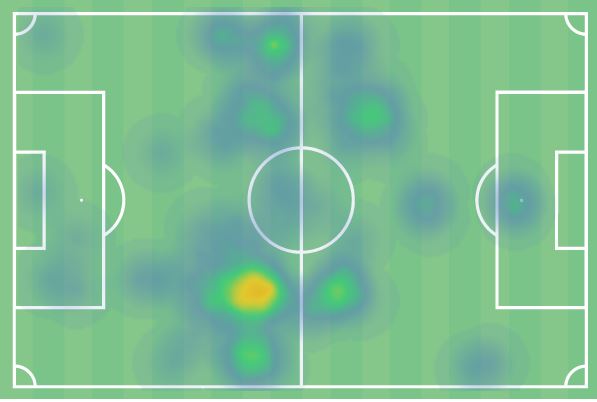 Union generated only 0.07 xG to Hertha’s 1.54, and both of these values were effected by Union’s disorganization from second balls. Union are a team who largely look to use long passes in order to create chances, relying on the aerial quality of Sebastian Andersson to win headers and for their midfield and surrounding players to contest and win second balls. To win second balls, local compactness is needed around the ball, and this hurt Union both offensively and defensively.

We can see an example of a second ball being contested here, with Union simply unable to get from deep into a compact position, leaving a massive space for the defender to win the ball and sprint into, where he is then engaged by a player. This player therefore has to give up their position in a deeper area, and this opens passing lanes.

We can see a similar example here where there is acres of space in behind should Hertha win the second ball, which they do. This lack of compactness means if they don’t win the ball initially they can’t create an attack, and are also not susceptible to counter-attacks themselves, which is where they conceded many chances from.

Hertha’s second goal comes from this exact problem, with Union kicking long and not winning the second ball, and then diving in to win the pass after this. The central defender simply over commits and Ibisevic turns and loses his marker. In one simple kick, by winning the second ball Hertha are attacking a weakened Union defence.

When Union moved to a 5-3-2 in the 65th minute, they began to lose some of that width provided by the 5-4-1, and particularly in transition struggled to press effectively, relying on central midfielders to press the full-back when the intended scheme was wing-back to full-back This then had a negative effect on the rest of Union’s defence.

Hertha were perhaps flattered by the four goals they scored, but Union’s toothless attack deservedly lost the game. As this analysis has shown, Hertha’s positional play was effective at times but not fully figured out just yet, and Union limited them fairly well in the first half, before Hertha damaged them badly in a two-minute spree in the second half, with Union’s pressing and transitions to blame. Hertha deserved the win and look a changed side under Bruno Labbadia, and are now just five points off sixth-placed Wolfsburg, with their next game a tricky one against RB Leipzig.