SC Paderborn welcomed Hoffenheim to the Benteler-Arena in Paderborn for their Bundesliga match. Both teams are likely relatively unhappy with their current Bundesliga season, as Hoffenheim are currently missing out on Europa League qualification spot and Paderborn look to be going down unless they right the ship soon. Their match proved to be a step in the right direction for Paderborn as they secured a point against Hoffenheim after two early goals canceled one another out on matchday 27.

This tactical analysis will examine the tactics used by both Paderborn and Hoffenheim. The analysis will reveal that while both teams sought to take advantage of the other’s weaknesses, neither team was able to do so well enough to earn them all the points. 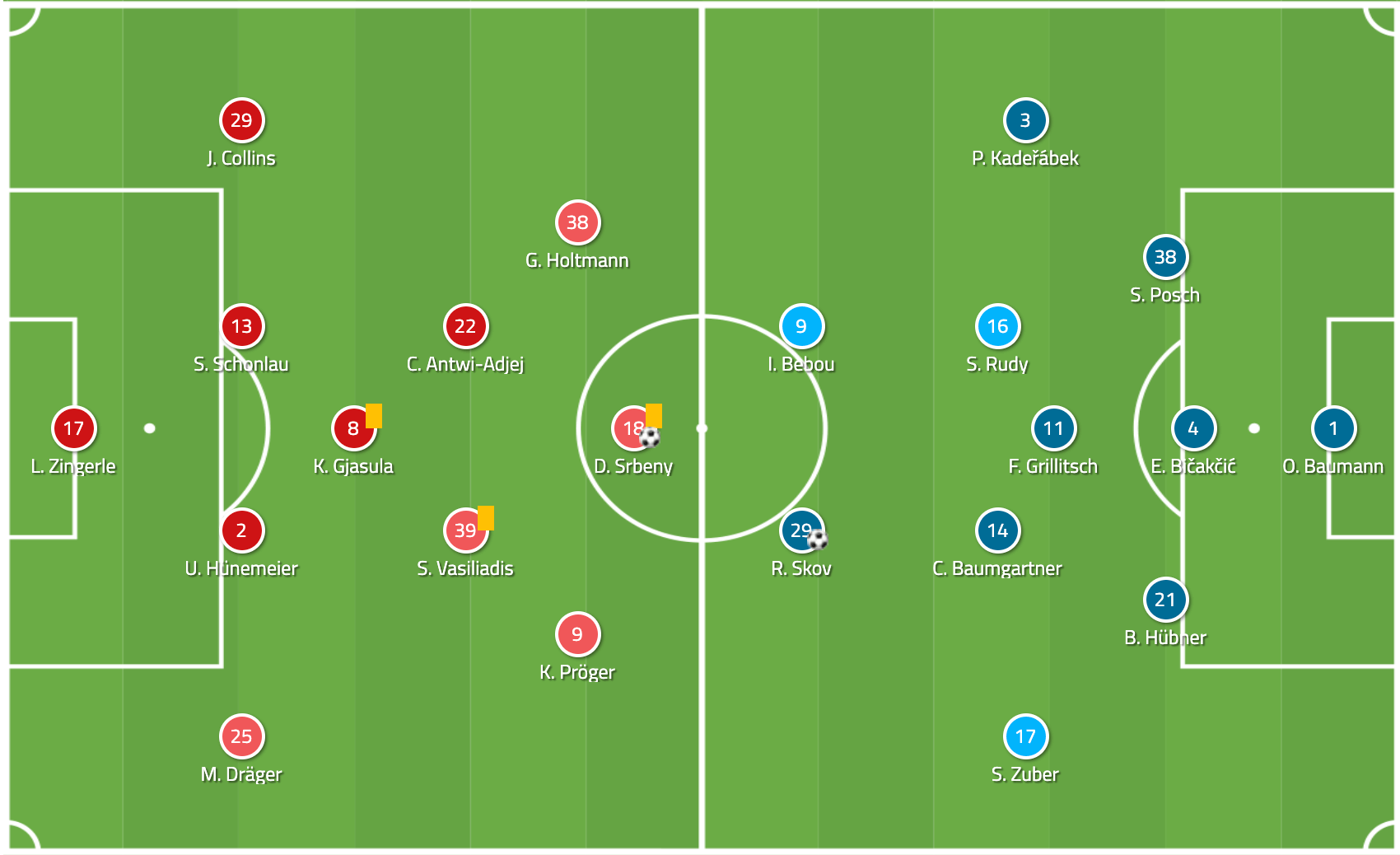 Steffen Baumgart sent Paderborn out in a 4-3-3 with Leopold Zingerle in goal. The back four consisted of Jamilu Collins and Mohamed Dräger as the left and right back, respectively, with Uwe Hünemeier and Sebastian Schonlau as the centre-backs. Their three midfielders were Christopher Antwi-Adjei, Sebastian Vasiliadis, and Klaus Gjasula, with Gjasula playing as the holding midfielder. Gerrit Holtmann was on the left-wing, Kai Pröger was on the right, and Dennis Srbeny was the lone forward.

Alfred Schreuder’s side came out in a 3-5-2 with Oliver Baumann in goal. Benjamin Hübner, Ermin Bičakčić, and Stefan Posch made up the back three, and they were often assisted defensively by the two men on the wing: Steven Zuber and Pavel Kadeřábek. The three in the centre of the midfield were Sebastian Rudy, Christoph Baumgartner, and Florian Grillitsch, who played as the holding midfielder. Robert Skov and Ihlas Bebou were the forwards for Hoffenheim, with Skov scoring their lone goal on the day.

Hoffenheim looked to dictate Paderborn’s play by making sure that they were forced to build up from the back through the wings rather than the centre of the pitch. Hoffenheim were able to do this with only four players against Paderborn’s five. Despite being outmanned, their positioning was excellent, which allowed them to dictate play. 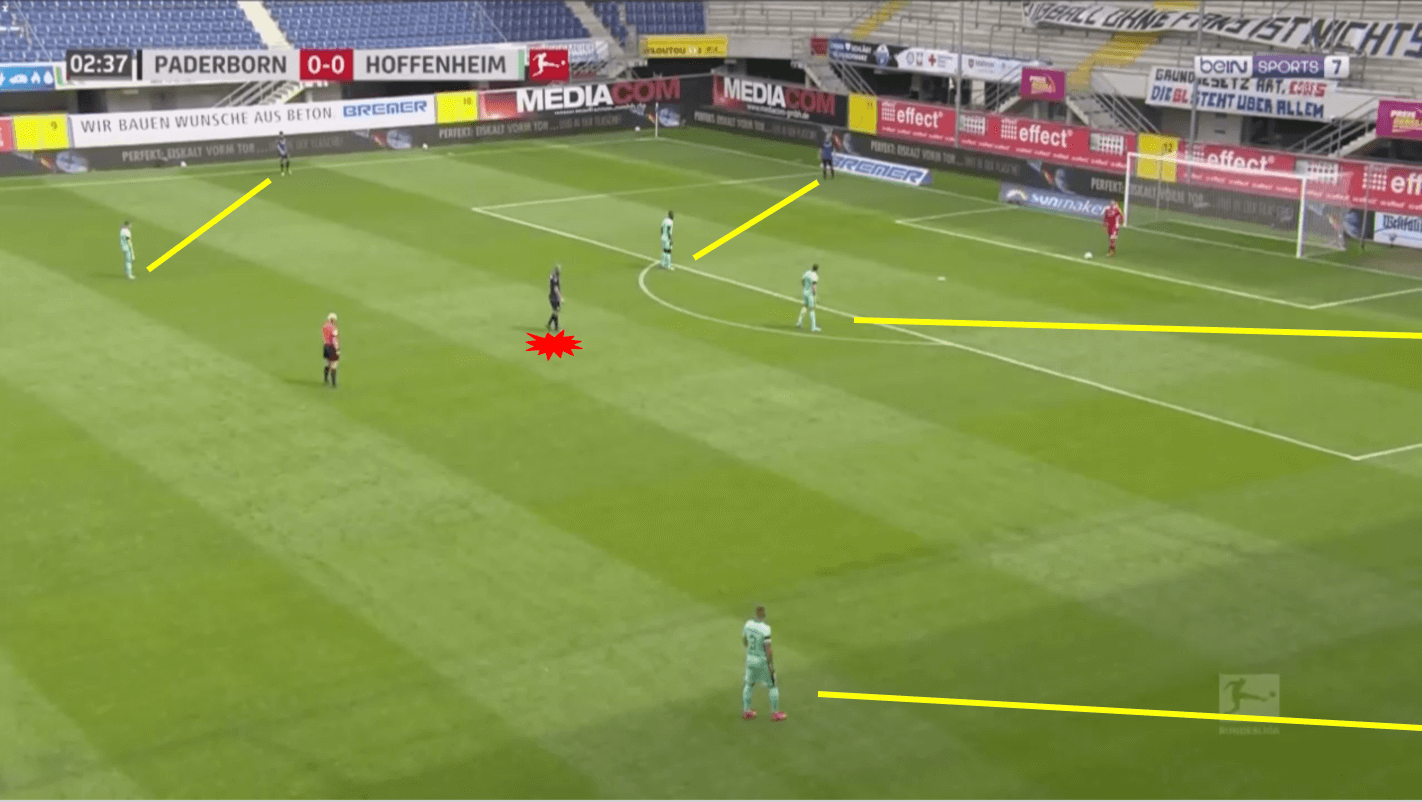 From the beginning of the match, Hoffenheim pressed in what would look like a 4-2-2-2 structure. Their two forwards, Skov and Bebou, would stand at the top of the penalty area, blocking Gjasula, the holding midfielder, from receiving any pass with their cover shadow. This meant that Zingerle, Paderborn’s keeper, would need to play his centre-backs in order to start the build-up. By narrowing down his passing options, Hoffenheim have made play more predictable for the men behind them, meaning they can adapt and react in a much smoother, more supportive way. 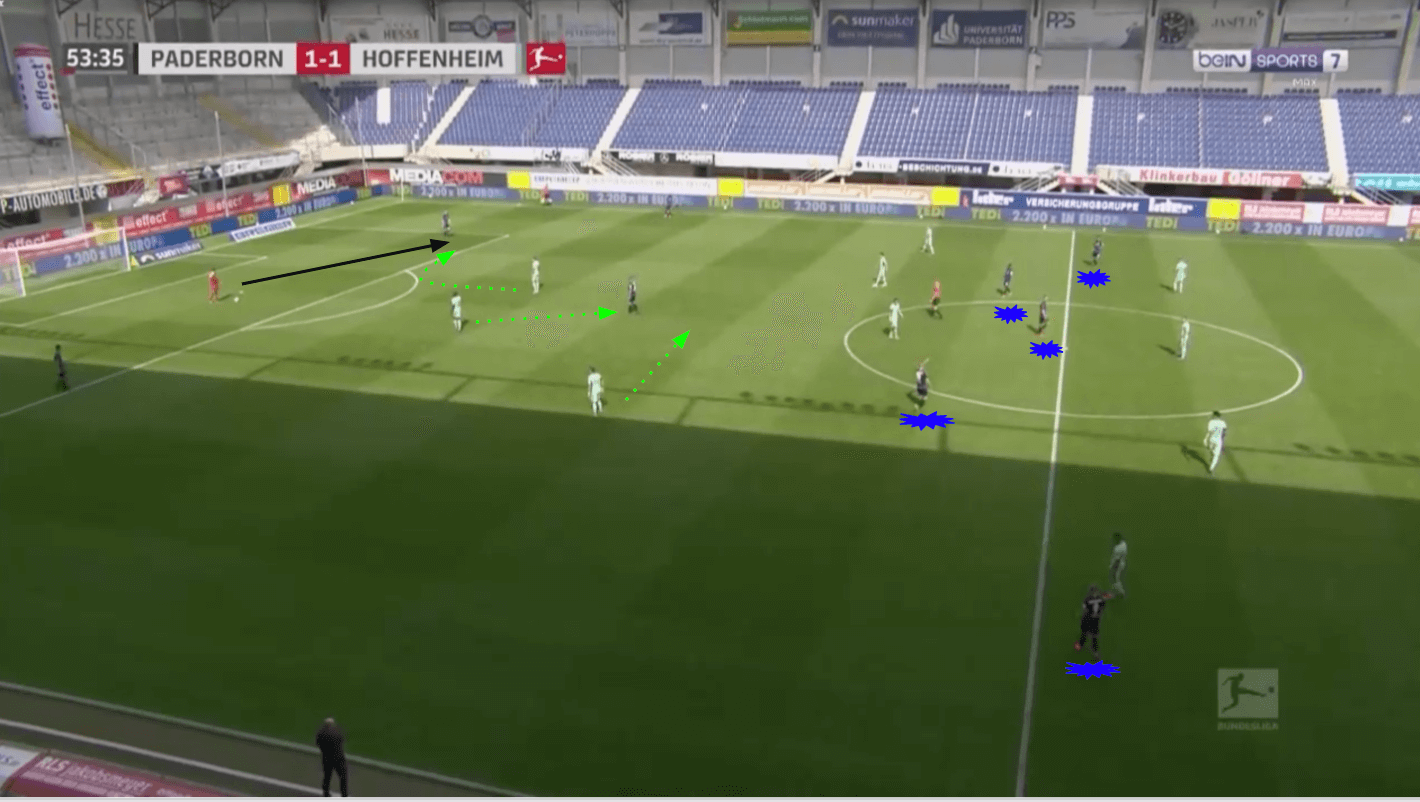 When Paderborn would play the ball out, Hoffenheim’s forwards’ runs would dictate how effectively they could force Paderborn into playing on one side of the pitch. Most of the time, Skov or Bebou would curve their run so as to prevent Paderborn from playing back to their goalkeeper. If Skov pressed, as is marked in the image, Bebou would drop down and mark the Gjasula, still keeping him from being able to get on the ball. The wingback, in this case, Zuber, would shift over into the centre of the pitch, effectively preventing any midfielder from appearing to support. The success of the press really fell onto the runs that Bebou and Skov made; in fact, the movement for Hoffenheim’s goal started when Skov properly sealed off the goalkeeper as an option, forcing the ball forward and creating a turnover on the edge of Paderborn’s defensive third. Paderborn seemed to accept that their build-up probably wouldn’t work, which is why they have a numerical overload higher up the pitch; it’s almost as if they were expecting the pressure and knew they could send it long into that area to try and win the first and second balls.

With their press functioning and forcing Paderborn into launching the ball down the pitch, Hoffenheim saw more of the possession in the match — with a total of 55%. Alfred Schreuder’s squad looked to play through the half-space in order to generate chances.

While almost all of their key passes came from their wings, the progression of their play saw them distribute to players on the wing from the half-space. This idea mainly looks for them to draw in exterior defenders in a defensive shape in order to create more room for their players on the wing to whip in an effective cross.

Occasionally, midfielders would be able to play their way through and attract attention through their combinations and diagonal runs. The movement by Baumgartner is a perfect example of how they attracted defenders. 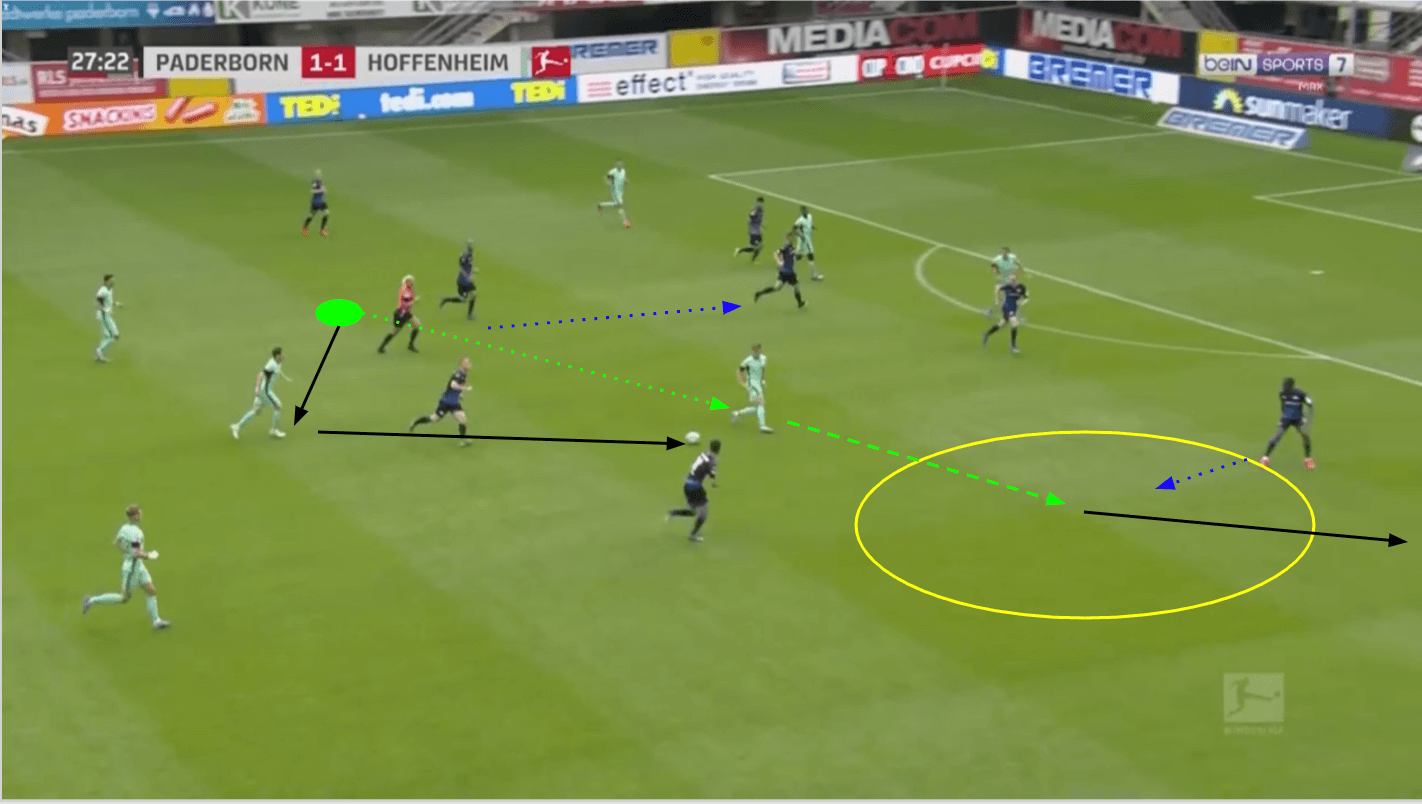 Baumgartner began his run on the left side of the pitch, initially receiving the ball after making a third-man run. He then played a 1-2 pass with Rudy in order to get around defenders. Because he’s running on a diagonal, a central defender cannot follow him, so Baumgartner is now free between the two lines of pressure. As he dribbled into the half-space, Collins, the left-back, had to step up and provide pressure, lest he allow Baumgartner to dribble in on goal. This creates ample room for Pavel Kadeřábek to receive the ball and cross, which was exactly what he did.

Hoffenheim also looked to build vertically through the half-spaces in order to generate crossing opportunities. In this instance, Baumgartner checked into the half-space to start the move. 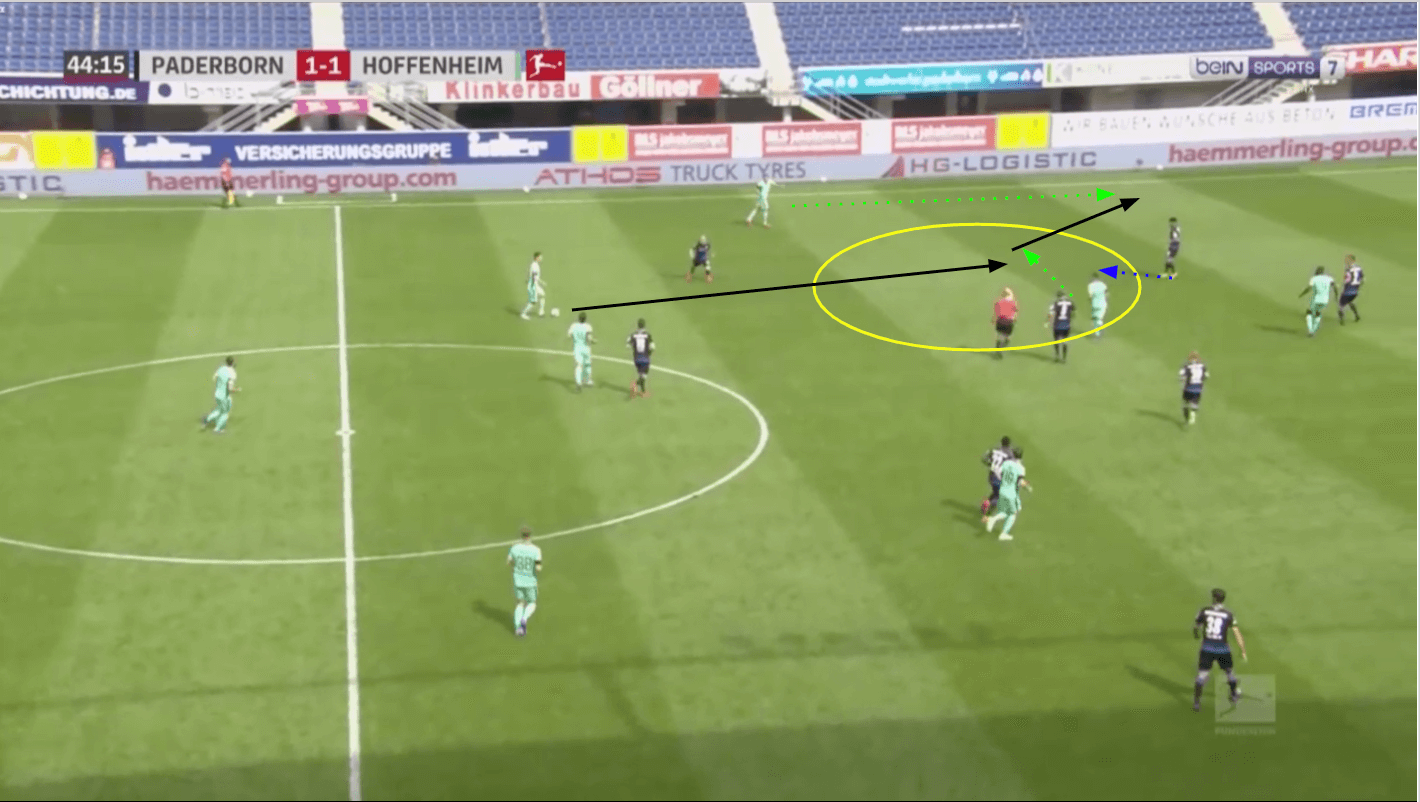 As he did, Hübner played the vertical pass to his feet. Baumgartner was marked tightly, but he still took his first touch forward in an attempt to attract pressure from Dräger, the right-back. His next touch was to then play the ball to Zuber, who had been delivering crosses for most of the match. As soon as Zuber got the ball, the forwards started making their runs. Zuber was unable to get the cross off, but this movement was clearly drilled at training, as the exact same set-up happened three minutes previously in the other half-space.

Paderborn also looked to take advantage of the half-space, but not in the usual sense. Instead of playing passes through them in order to attract defenders, they used the space to get men open who could create runs in behind Hoffenheim’s defence. 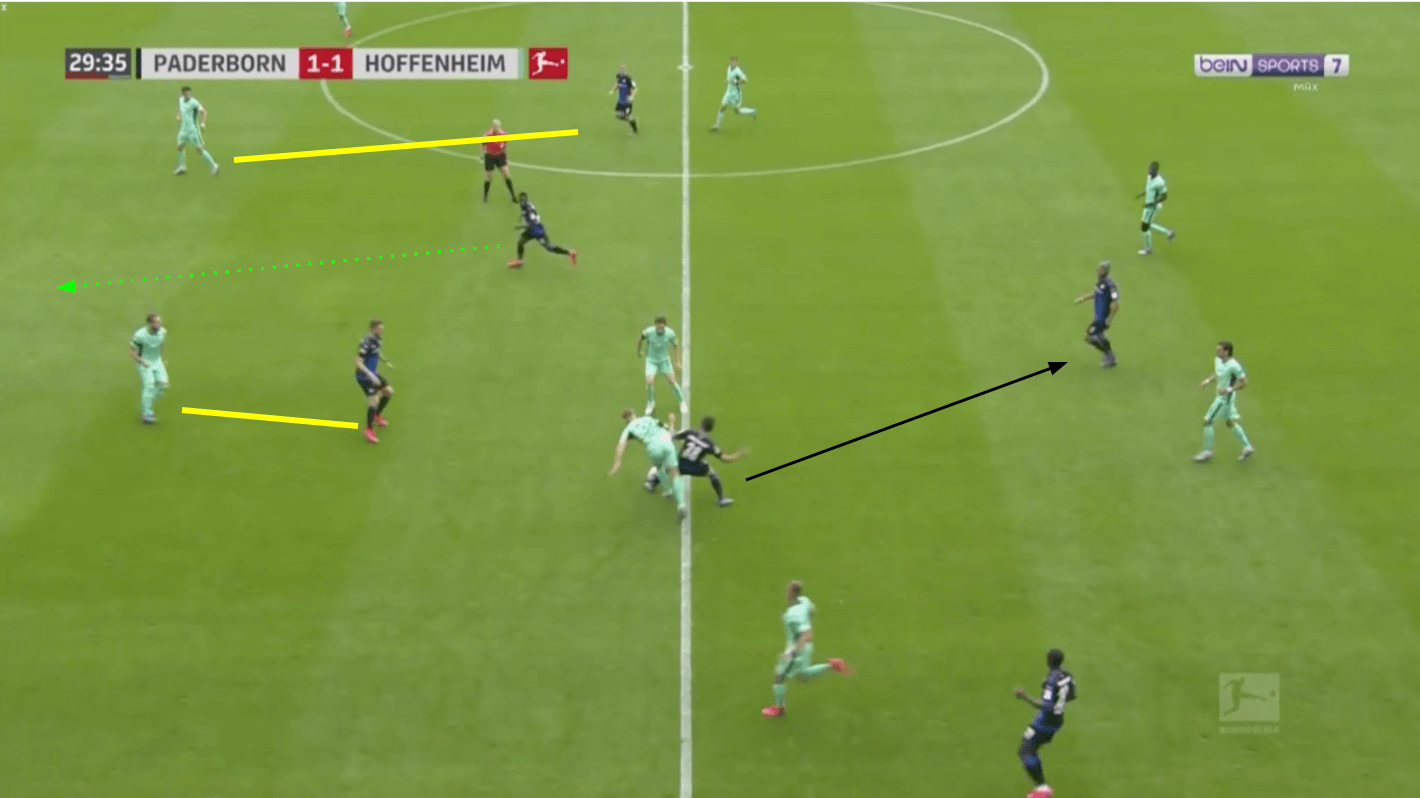 As Paderborn successfully built out of the back with some quick one and two touch passes, they progressed the ball to midfield. Holtmann was put under pressure immediately when he took his first touch inside, but he had a Gjasula available for a back pass. As the ball goes backwards, the last two defenders on Hoffenheim’s left side, Benjamin Hübner and Ermin Bičakčić are both responsible for men directly in front of them. Christopher Antwi-Adjei took advantage of his excellent positioning to make a run in behind the defensive line, which saw him able to dribble into the penalty area before ultimately having his shot blocked.

Even higher up the pitch, Paderborn tried to manipulate defenders by starting runs in the half-space. In this instance, the move started when Antwi-Adjei checked to the ball. 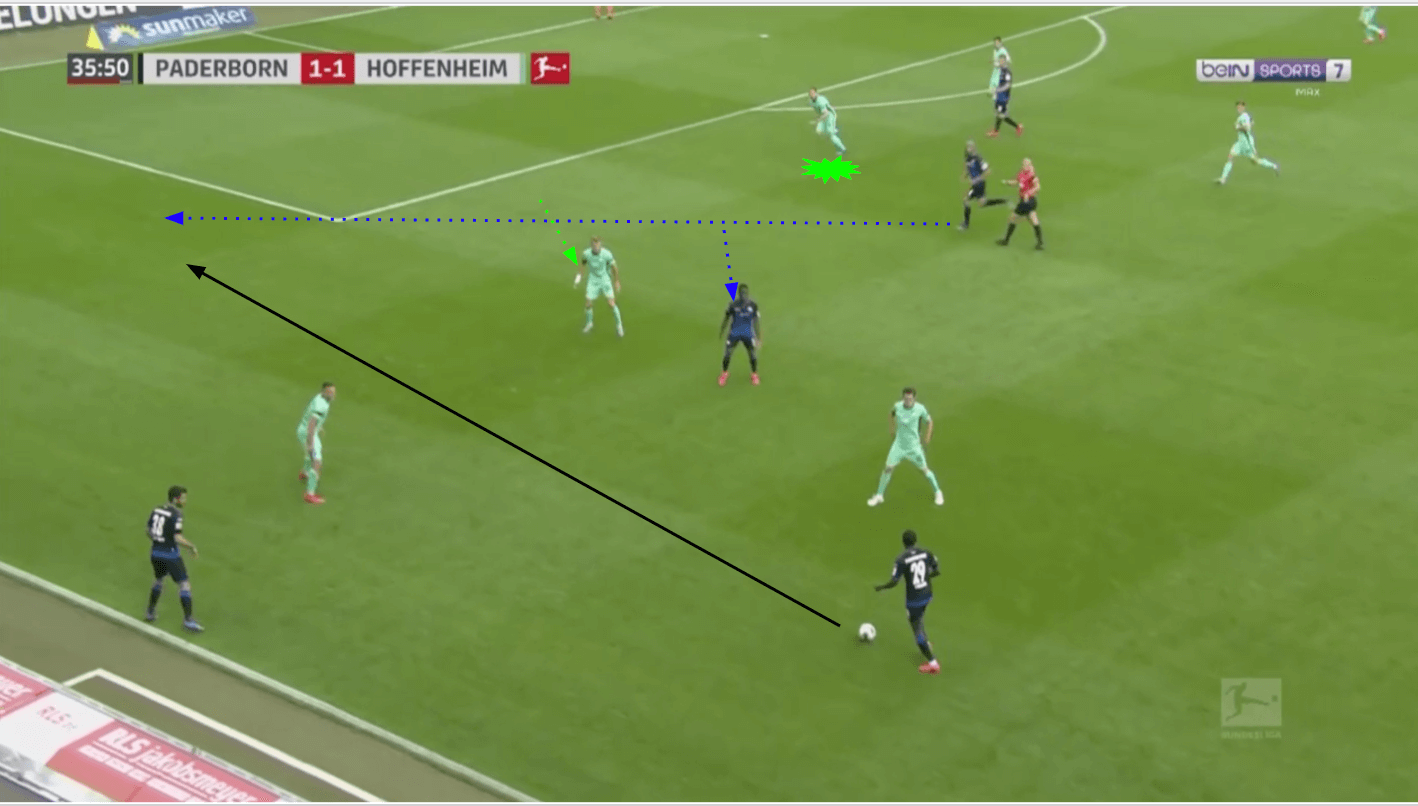 As he checked back towards his teammate, Gjasula glided into the half-space. From there, he made his run to the corner of the pitch. Collins, the man on the ball, saw his run and played the ball into the space. Ermin Bičakčić, the man marked in green, is the central centre-back in a back three. He had a tough choice to make: follow Gjasula and vacate the space or allow Gjasula to receive the ball and have an open pass into the box. Bičakčić chose to follow, and while Hoffenheim escaped unharmed in this instance, that’s more a result of Paderborn’s inability to create chances than anything else.

There were multiple times when Paderborn was willing to sit back a bit and let Hoffenheim come up the pitch without applying any pressure. However, when Paderborn decided to press, they did so by making sure that they had an even amount of men committed to the press as Hoffenheim had committed to breaking the press. Most of the time, this was done in a man-oriented structure. 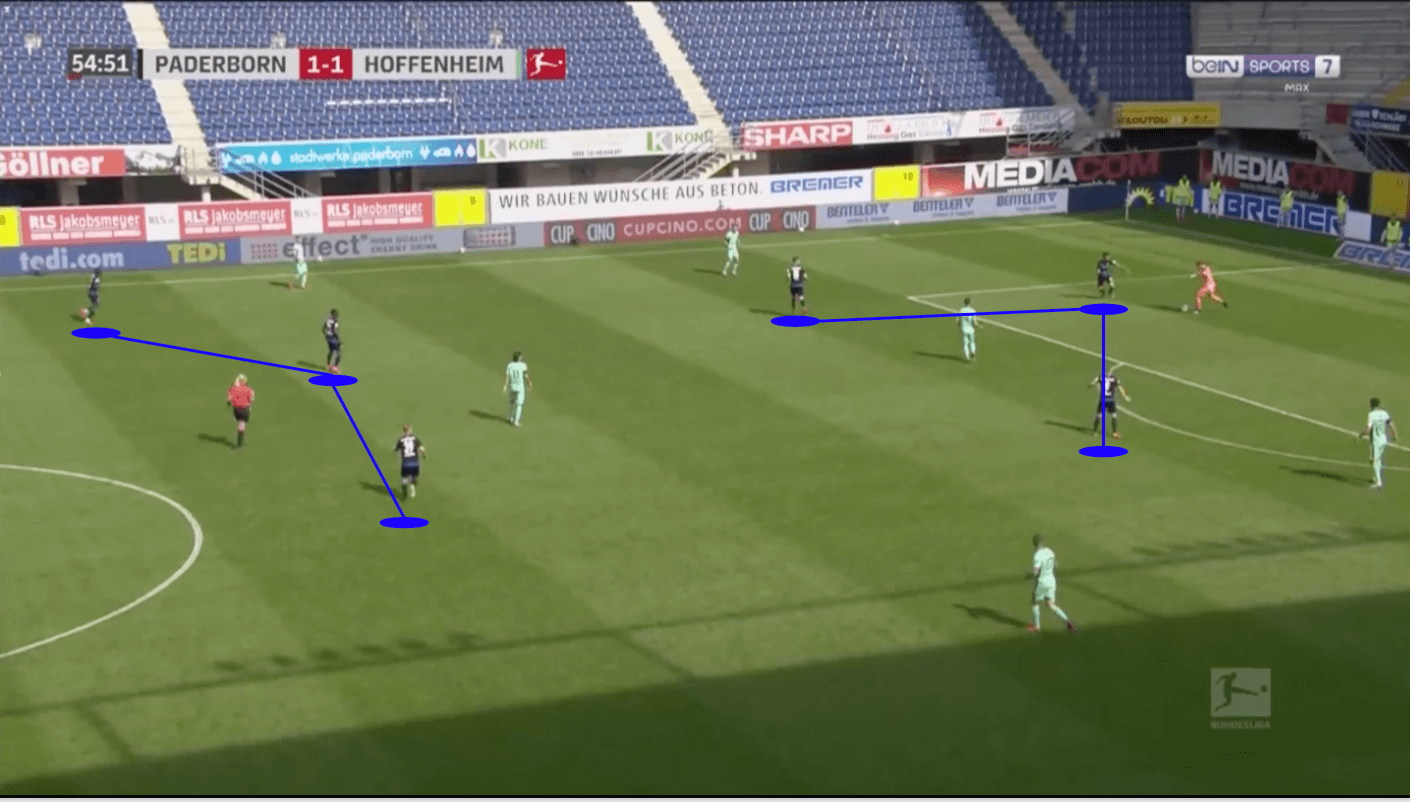 In the image above, Paderborn pressed in their 4-3-3 shape, which hypothetically should work well, as Hoffenheim were playing with a back three. This meant that Paderborn could press each of their centre-backs, forcing Oliver Baumann, the goalkeeper, to either play the ball long or try to pick out a tough pass. In this instance, when Holtmann stepped to press Baumann, Srbeny had to slide to his left in an attempt to mark two players. Baumann was able to play Bičakčić, which allowed Hoffenheim to play out of pressure.

Earlier in the match, when in their mid-block, Paderborn would send four players forward. The front three with the addition of Antwi-Adjei looked to press the Hoffenheim backline. 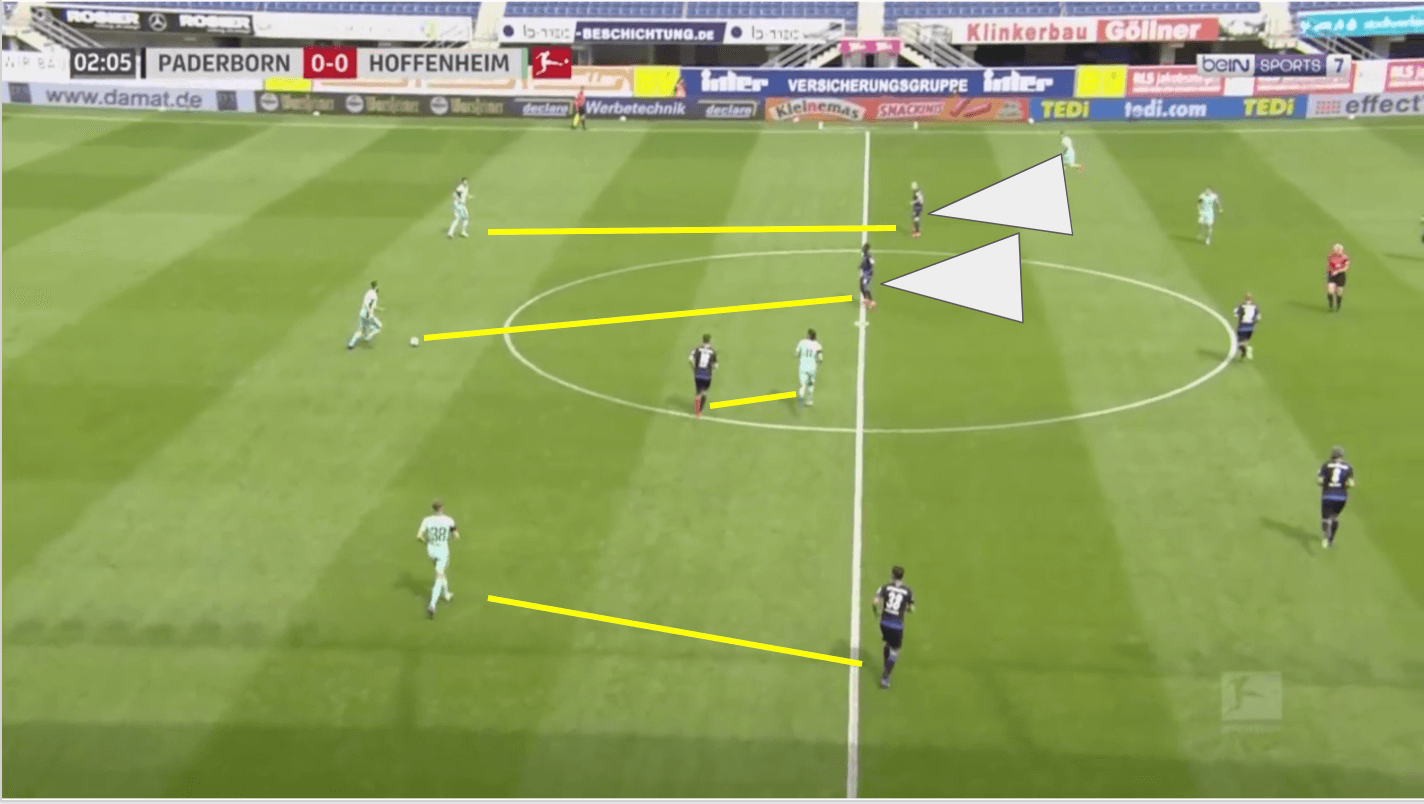 This created a 4-2-4 structure that looked to do protect the centre of the pitch. First, Paderborn’s front line wouldn’t press as the ball moved horizontally. If they did, they would most likely open up passing lanes for Hoffenheim to play through. Instead, they adjusted their movement, dropping off slightly to prevent these penetrating passes. When the two midfielders would mark Hoffenheim players in the centre of the pitch, other Hoffenheim players would still be open. This meant that the front line had to check their shoulders and make sure they were using their cover shadow in order to prevent any penetrating passes. This more compact defensive structure encouraged Hoffenheim to either try to play around them or by trying to go over the top of them. Hoffenheim weren’t able to do either too successfully, and Paderborn’s defensive scheme had paid dividends.

Ultimately the points were shared by the two teams. While Hoffenheim should have done better to convert their chances, Paderborn earned themselves a precious point in their race to attempt to escape relegation. They now only sit three points behind Werder Bremen and nine points away from safety. They’ll look to continue their fight on Wednesday when they take on Augsburg.

While the Borussia Dortmund – Bayern Munich match will draw a lot of attention on Tuesday, Hoffenheim will look to pick up three points against Werder Bremen later in the day, which could move them at least two places up the table depending on other results. While they created 2.56 xG against Paderborn, they’ll need to make sure to finish off those chances against another team from the relegation zone.