The biggest match of the past week saw South African league leaders Bidvest Wits face Kaizer Chiefs. The game saw two astute tactical managers do battle. Although coming from a loss to Mamelodi Sundowns, Chiefs looked to carry on their rise under German Ernst Middendorp. Meanwhile, four-time PSL winning Coach Gavin Hunt was looking to entrench his lead at the top of the table with his Wits side.

This analysis will look at the key moments, interesting tactical duels and statistics that secured this game as a tactical managerial master class.

Thulani Hlatshwayo played as the touchline-shy full-back with Sifiso Hlanti on the other side. Elias Pelembe and Deon Hotto flanked Cole Alexander and Thabang Monare, while Terrence Dzvukamanja and Mxolisi Macuphu played up front. 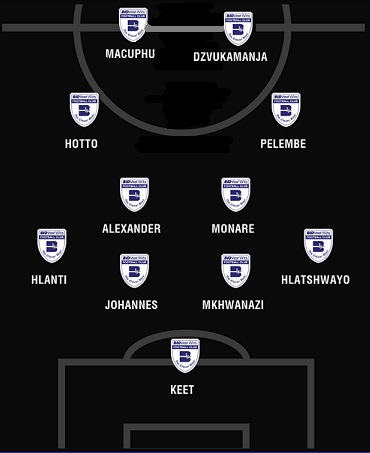 Kaizer Chiefs’ line up was a 3-5-2, with Kgotso Moleko and Siphosakhe Ntiya-Ntiya on either flank of the five-man midfield and George Maluleka playing deep. The defence consisted of Daniel Cardoso, Mario Booysens and Teenage Hadebe. Lebogang Manyama played in the advanced central playmaker position alongside Hendrick Ekstein and behind Colombian Leonardo Castro and Khama Billiat. 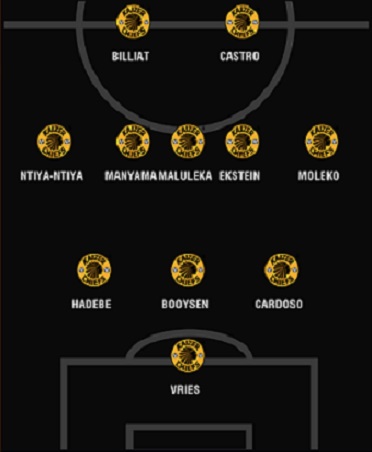 Bidvest Wits adopted a clear 4-3-3 formation inside the Chiefs’ half. This was done to match the Chiefs back three and discourage them playing out from the build-up phase. As such Cardoso and Hadebe, not the most ball comfortable centre-backs, were tasked with playing out in the Salida Lavolpiana style.

Wit’s pacey front three easily dealt with the languid build-up, quickly pressing the centre-backs. George Maluleka was the only deep passing option, and he was easily marked by Wits’ shadow marking. All this and Chiefs’ obvious discomfort in using Vries in goal as a source of numerical superiority meant that their build-ups fell flat.

When Chiefs did manage to move the ball from the build-up phase to the possession phase they faced tremendous pressure. Moleko was caught on numerous occasions by a Wits triple-press which seemed to have adopted the movement of the ball from central defence to the wide midfield areas as a pressing trigger.

Moleko’s poor body positioning on the ball meant that he was often caught unaware. Wits used a three-man press in that wide area consisting of Hlanti, Domingues and Macuphu, with Monare and Alexander closing down central passing lanes.

Hlanti was the first player to press, stopping the progression and limiting the time and space that Moleko had on the ball. Domingues pressed from the wide midfield position. Along with the double pivot, he ensured the cutting out of the central passing lanes, and aggressive pressing from the centre. This left Moleko with a predicament, as he was marked by the touchline and also pressed by the forwards from behind.

Wits seemed quite content to play on the transition. Their choice of player spoke of graft and speed. Against a Kaizer Chiefs team cautious to play out from the back, their only shot on goal in the entire match came from a transition. The shot’s timing was in line with the stat that Wits score most of their goals in the middle third of the first half.

Wits’ three man press pounced on an isolated Castro who was dispossessed by Domingues. Monare released a quick ball to the fleet-footed Dzvukamanja. After some quick footwork the latter shot from range, but his effort was comfortably saved.

Ineffective positioning means Chiefs can’t gegenpress. Moleko is caught on the wrong side of Dzvukamanja who is in tons of space. His long range shot is however comfortably saved.

Ntiya-Ntiya and the battle for the perfect transition

Both teams’ preference for the transition moment was clear. The few times Wits tried playing from the back they arranged in a 3-4-3 formation. Captain Hlatshwayo here showed his preference to fall into the right centre-back position. However Wits’ lack of staggered positioning, which would have allowed for the necessary angles for ball possession, meant that their play was ineffective.

Their positions were too flat and they lacked the width and depth to allow stable possession. This allowed the teams to cancel each other out, especially in midfield. The 48 to 52% ball possession stat in favour of Chiefs underlines the fact that no team truly dominated the match.

Sifiso Hlanti was a case in point of Wits’ inclination to sit and counter. Often a marauding left-back, Hlanti played in a conservative wide position as the first point of contact for the Wits press in the wide areas.

The first goal of the match came from excellent work from full-back turned wide midfielder Ntiya-Ntiya. His quality was exemplary throughout the match, with Chiefs’ most dangerous moves coming from the 22-year-old. Chiefs have a gem in the youngster, who played quality low crosses that disturbed an experienced Wits backline as we will see below.

Hlatshwayo’s preference to remain close to his two centre-backs meant that Ntiya-Ntiya was afforded plenty of space on the left side. This could have been done for two reasons. Firstly Billiat is adept at one-on-ones, and Wits opted not to isolate Hlatshwayo in the wide areas in order to consolidate their defence in the centre. Wits had also deployed a tight ball-oriented shift which relied on compactness to prevent Chiefs’ dangerous combinations.

This compactness made Wits’ three-man press effective. It is this compactness however that also meant a swift ball to the wide area found Ntiya-Ntiya in tons of space. From this space Ntiya-Ntiya played another one of his delightful low crosses for Castro to finish.

An ineffective clearance from Hlanti allowed right wing-back Moleko the chance to play the ball to Maluleka. His swift pass to Manyama allowed the latter to play a redirected ball to Ntiya-Ntiya on the left overlap. The resulting low cross was built from pressure, speed and accuracy. This was a typical transition goal from Chiefs, as we can see below.

Wits had shown the intention to change approach by taking off Macuphu for the intelligent-moving Lehlohonolo Majoro at half time. However the Chiefs goal in the 58th minute impressed the need for further changes. In came Vuyo Mere for Dzvukamanja in the 64th minute and Deon Hotto for Gift Motupa 10 minutes later. The change in player profile meant that Wits abandoned playing on the counter for more creative options.

For example Majoro enjoys running into the box from angles that allow him to both protect the ball and get angled shots at goal. His technique means that he can place the ball with relative ease. He is however not your typical pressing forward.

Gift Motupa was brought on as a combination striker to trouble the three-man Chiefs defence. His performance was enabled by a now advancing Alexander and Monare, players with good technical ability. The experienced Mere was also brought on to provide defensive cover on the right side that Chiefs had been exploiting and to give options in attack.

Whilst positive, the changes also opened up the game. Due to the advanced positions of the ‘double six’ Chiefs, who had grown in confidence, were allowed central space behind the Wits midfield. The advancing full-backs were ineffective, and were countered effectively. This allowed Chiefs, a traditionally fast combination and transition team, the space required to score the second goal.

Moving again from the transition, in which the Wits’ attack broke down in the final third, Manyama released Bernard Parker, who had come on for Billiat. With Wits’ double six caught out of position, Parker was able to find space. He combined with Ekstein after dancing past a poorly organised defence. Ekstein was then on hand to finish a beautiful team combination goal assisted by substitute Parker.

Wits had gone on to resemble a 3-4-3 with the introduction of Mere and after freeing up Hlanti on the left as a wide midfielder. Their high press while trying to equalise with the two central midfielders looking recycle possession meant that they lacked the stability they had enjoyed in the first half. The need for a more expansive game to create opportunities opened up Wits defensively and the three centre-backs were exposed.

This game will be remembered as a tactical masterclass from two managers who share relatively similar ideas. It could probably also mark the day Chiefs truly rose from the ashes, bringing pride back to the Johannesburg team’s many supporters.