How Cincinnati neutered Atlanta United’s attack and stole a point

Atlanta United have had a slow start to the new season under new manager Frank De Boer, having failed to score in their first two games this season. They lost 2-0 in the MLS season opener away to DC United, and then were embarrassed 3-0 in the first leg of the CONCACAF Champions League quarter-final to Liga MX side CF Monterrey. After winning the MLS Cup last season under Tata Martino, they’ve transitioned to a more deliberate style of play under the former Ajax manager.

As a new expansion side, Cincinnati lost their first ever match of MLS football at Seattle 4-1 but their expected goals against of 2.2 was the sixth best in the league last week. This defensive solidity would come in handy in this match as they looked to slow down one of the most dangerous attacks in MLS last season.

Cincinnati took up a very defensive structure, challenging the Five Stripes to break them down. Atlanta United scored early, with reigning MVP Josef Martinez putting Atlanta ahead in the fifth minute. After this though, Atlanta struggled to create any decent chances while the visitors also struggled to create any attacking threat.

However, with just a one-goal lead, Atlanta were living dangerously and paid for not adding to the scoreline. It only took one mistake, in the 86th minute, for Cincinnati to level the score at 1-1 through Roland Lamah. This allowed Cincinnati to record their first MLS point, and continued a terrible start to the season for the defending champions. 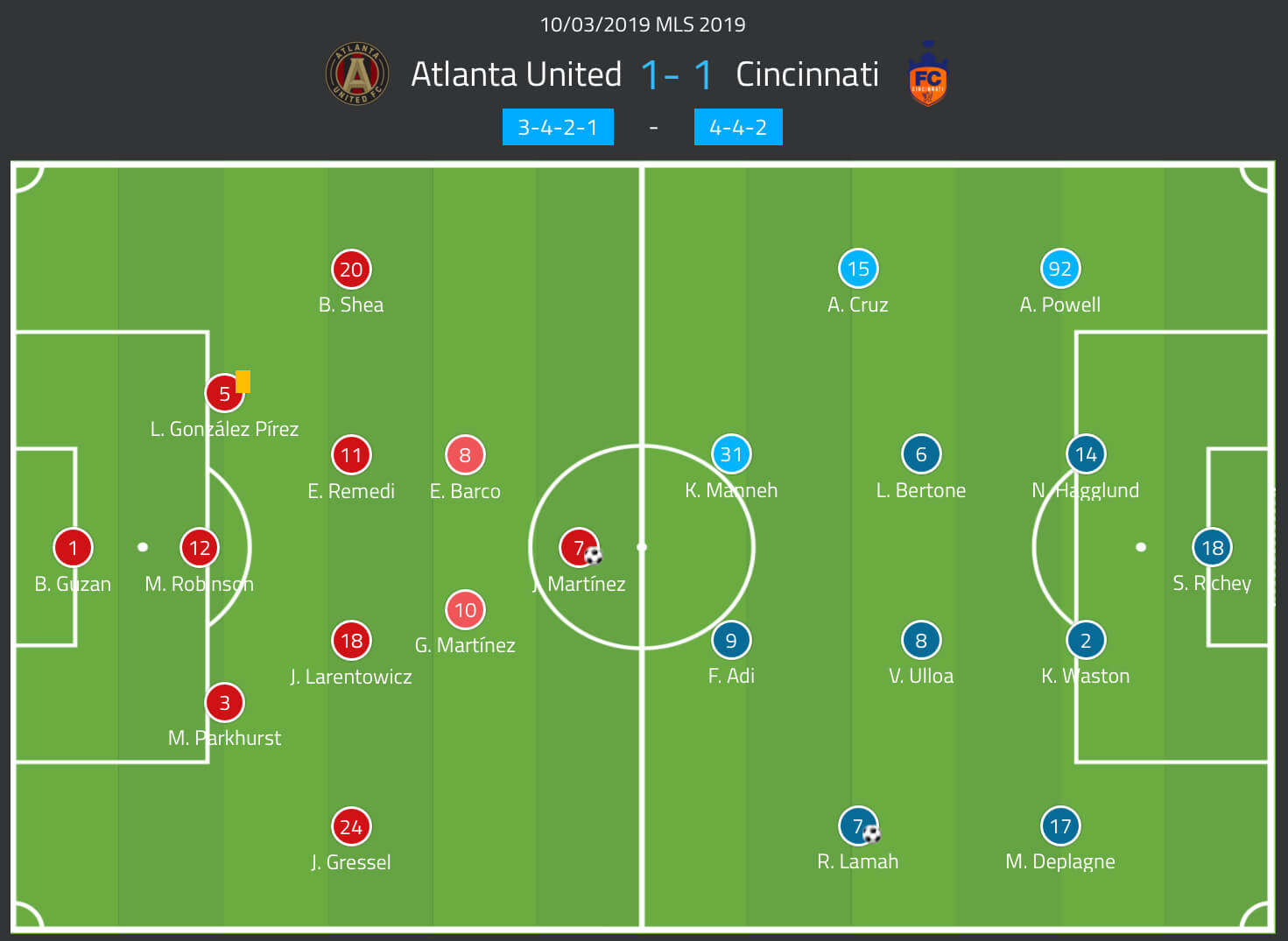 Frank De Boer made two changes to the side which had lost 3-0 on the visit to Mexico four days previously. The Dutchman continued with the transition to a 3-4-3, after the success they had enjoyed last season in a 3-5-2 under former Barcelona manager Tata Martino. Jeff Larentowicz and Julian Gressel came back into the side, replacing Mikes Ambrose and Darlington Nagbe, both of whom were available from the bench.

Manager Alan Koch made a couple of changes from the side which had lost 4-1 in their first MLS match. Setting his team up in a fairly defensive 4-4-2, Spencer Richey got the start in goal in place of Polish goalkeeper Przemyslaw Tyton, who was left out of the match day squad altogether as was dealing with a hamstring issue. Corben Brown and Eric Alexander dropped to the bench, to be replaced by Kekuta Manneh and Allan Cruz.

There were several important tactical trends in this match that we will look at. Firstly, we will look at how Cincinnati congested the middle of the pitch, and how that forced Atlanta to try and attack through the wings and what effect this had on their attack.

Cincinnati came into this match with a clear plan. They set up their side in a 4-4-2, and looked to congest the middle of the pitch. The visitors had a good compactness to their block, and were able to stop Atlanta from any progression in the central areas. They played a low-mid block, engaging Atlanta as they crossed the midfield line.

They didn’t apply any pressure to the home side’s centre-backs with the ball, but instead looked to stop any passes into the midfield. The result was that Atlanta were forced to progress through the wide areas.

So far this season, Atlanta have struggled with slow ball movement. They have often had a lot of sterile possession, but have been unable to create many chances. That trend continued in this match. The ball would move from side to side across Atlanta’s back line, but with very little threat. Cincinnati’s forwards were very effective in preventing Atlanta from playing the ball into their central midfield pairing of Jeff Larentowicz and Eric Remedi.

As we can see in the image below, Atlanta have very little pressure on their back line with the ball. Cincinnati are very compact, and the forwards are able to prevent any passes into central midfield. The only available passing options are in the wide areas.

With Atlanta having such problems moving the ball centrally, they were forced to progress the ball in the wide areas. Within the first five minutes though, Atlanta were able to take the lead after a quality through-ball by right wing-back Julian Gressel.

In the image below, we can see that Cincinnati are unable to get pressure on the German out wide. He was able to play a ball through to Josef Martinez, who was able to get behind the defensive line.

Atlanta United slow down and struggle

With the home side taking the lead after five minutes, Atlanta United looked like their attack was finally clicking after their struggles through their first two games this season. Unfortunately for the home side, this turned out not to be the case. They were slow to move the ball, and this allowed the visitor’s defence to get organised.

With Cincinnati closing down the central areas, the ball continued to be progressed through the wide areas. The Five Stripes’ main attacking method seemed to be crosses from the wide areas, which looked like an extremely poor choice. Atlanta’s front line of Ezequiel Barco, Josef Martinez, and Gonzalo ‘Pity’ Martinez had nobody above 5″8′ tall. 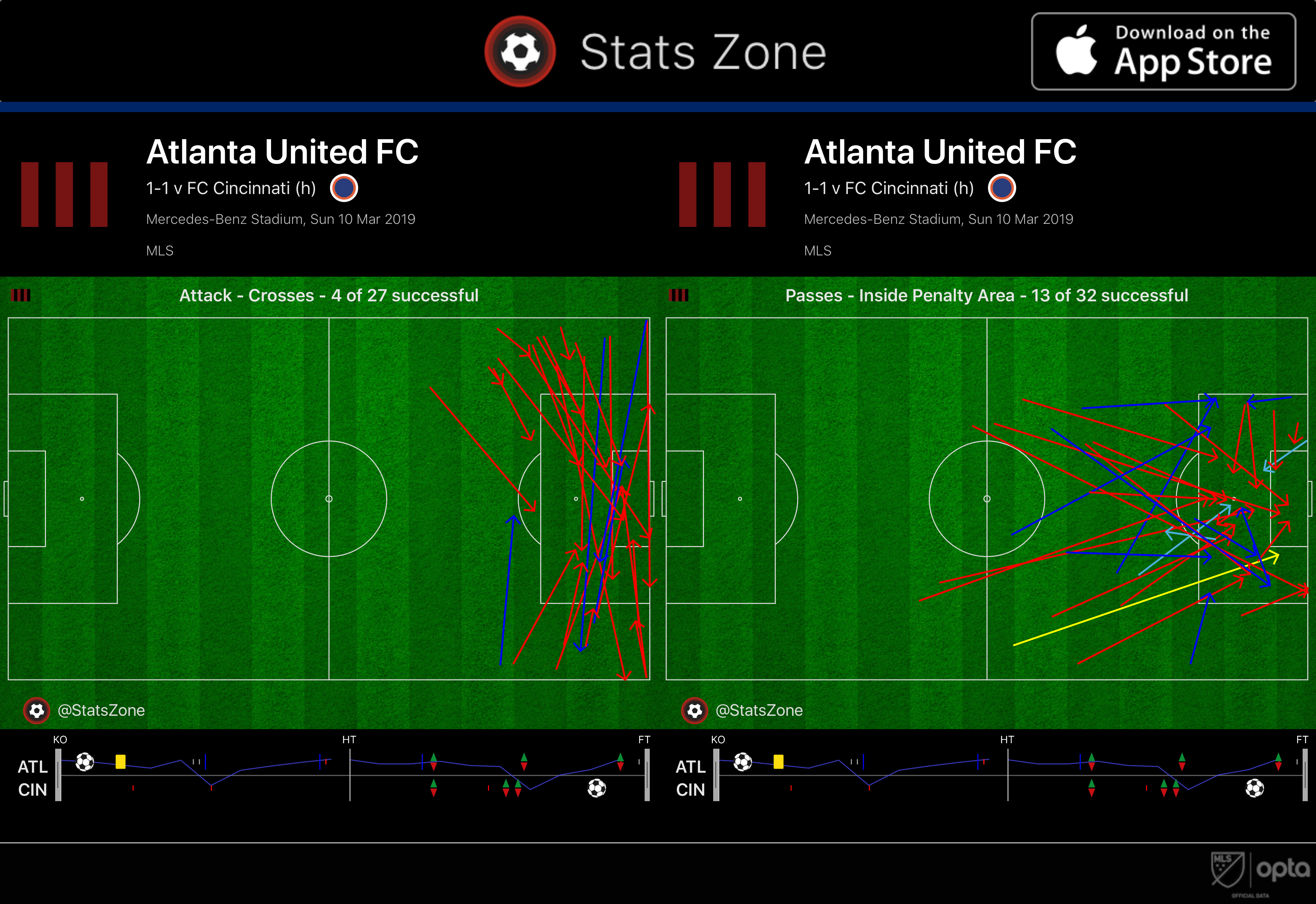 Facing Atlanta’s Lilliputian attackers were Cincinnati’s centre-back pairing of Kendall Waston (6″5′) and Nick Hagglund (6″1′). The result was that the Cincinnati centre-backs were able to combine for 12 clearances in the penalty area. 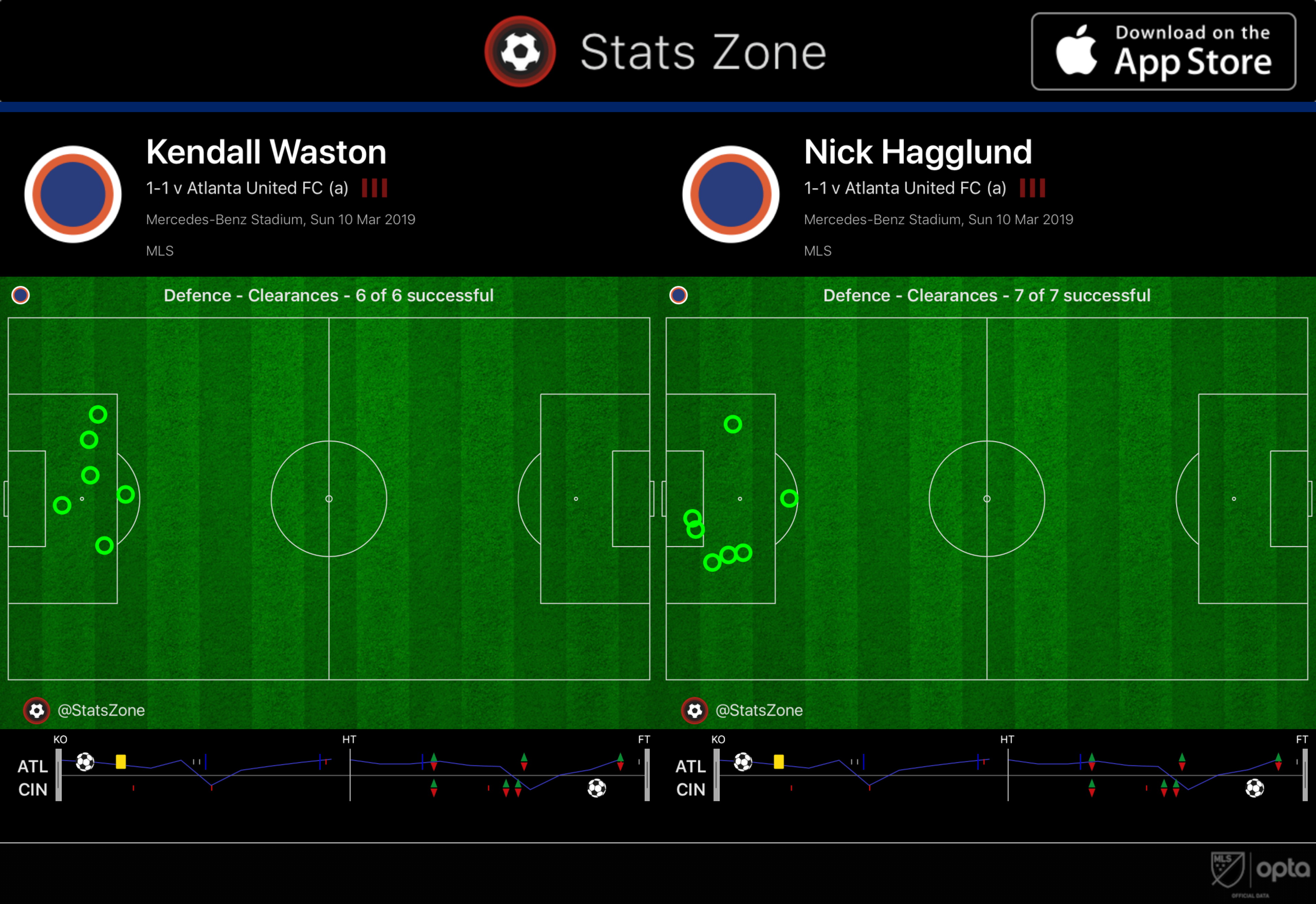 With Atlanta playing so slowly, it made it easy for Cincinnati to defend. The home side were also too cautious in their passing, preferring to play the ball backwards and recycle possession again rather than playing the ball forward. As we can see in the image below, there is an option for a pass into Josef Martinez between the lines, but Brek Shea instead plays the safe option back to the centre-backs to recycle possession again.

The timidity of passing also infected the wide attacking players of Atlanta United. Barco and Pity Martinez are some of the most exciting attacking talents in the MLS. But as we can see from the graphic below, they also preferred to pass the ball backwards rather than take a chance and play the ball forward to try and disorganise the opposition. Controlling possession seems to be the goal for Atlanta, not crafting chances.

In the first two years of Atlanta United in the MLS, they were one of the most exciting attacking sides. With league MVP Josef Martinez, who set a single-season goalscoring record last season, and two of the most expensive attacking options in Pity Martinez and Ezequiel Barco, this should be a side that continues the attacking play from last season. Unfortunately, it seems that new manager Frank de Boer has neutered this attacking machine. His team is slow and plodding in possession, making it easy for a team that can defend resolutely to close them down.

Atlanta United controlled the game, but by only scoring one goal they left themselves vulnerable to a mistake. This is exactly what happened, as Cincinnati was able to score the equalising goal from a mistake in the 86th minute. Without the ability to convert all of their possession into clearer chances, Atlanta are going to struggle in the season ahead.