Arsenal’s Premier League campaign thus far has been a frustrating one and was made worse with a 1-0 defeat to Manchester City last time out, with the Gunners currently sitting 11th in the table. While the points gap between themselves and the teams currently occupying European qualification places, Mikel Arteta has a monolithic task ahead if he is to guide Arsenal to Europa League qualification via the Premier League. This makes their performance in the very same competition this season absolutely vital – by winning the competition, they are guaranteed Champions League football next season.

After drawing the first leg of this Europa League tie 1-1, Arsenal went into the second leg knowing they would likely have to simply outscore Benfica, barring a 0-0 draw. This tactical analysis will dissect the game from an Arsenal perspective, with an analysis in three key areas – Arsenal’s attacking tactics to combat the resolute Benfica defensive set-up, the Aubameyang and Saka connection, and finally Arsenal’s work out of possession; how their front line pressed well and how the midfield unit struggled in a defensive capacity. 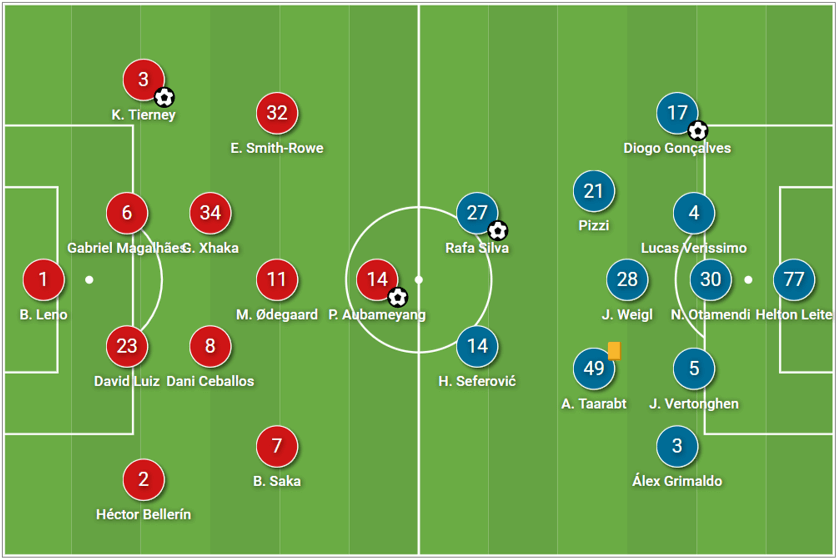 Arteta sent his Arsenal side out in a 4-2-3-1 shape, with Pierre-Emerick Aubameyang leading the line. He had support from Emile Smith-Rowe and Bukayo Saka on the flanks – Martin Ødegaard through the middle. Defensive reinforcement from midfield was supplied by Dani Ceballos and Granit Xhaka, who both, particular with Xhaka, acted as a deep-lying playmaker to launch Arsenal attacks. At the back were Héctor Bellerín, David Luiz, Gabriel, and Kieran Tierney (from right to left) – Bernd Leno between the sticks.

Visitors Benfica deployed a 5-3-2 system that looked to keep Arsenal from holding possession in midfield with an aim to limit their chances on goal. The full-backs were Álex Grimaldo and Diogo Gonçalves, who offered both defensive support but also the occasional attacking input too. Ex-Premier League defenders Jan Vertonghen and Nicolas Otamendi partnered up with Lucas Verissimo in central defence. In midfield, Benfica have a range of talents – Adel Taarabt, who brings back fond memories of his dazzling performances in a QPR shirt in the past, joined Pizzi and Julian Weigl. Rafa Silva and Haris Seferović lead the Benfica line in this tie.

We saw Arsenal vary their attacks in different moments of this game, but one particular attacking tactic that brought them success was hitting the flanks and using Benfica’s lack of width to their own advantage.

While the image above did not result in Arsenal creating a chance, mainly due to Ødergaard’s poor pass, it is still a good example of the Gunners committing their full-backs to join the attack to exploit the space in wide areas left by Benfica. Arsenal often also outnumbered the visitors in the central areas of midfield, which allowed them to pick up the ball quite often and move the ball into the flanks. However, what we can also see in the analysis above is the positioning and depth of Benfica’s backline. Despite playing five at the back, they didn’t adopt “park the bus” tactics, they instead used the extra numbers in defence to push further up the pitch, which, despite having numbers in wide areas, sometimes limited Arsenal’s option going forward.

We also saw the full-back and winger combination on the left flank on numerous occasions, with one instance in particular actually leading to a goal for Tierney after some impressive movement – as the following two-part analysis shows.

Part one of this analysis shows Tierney, already in an advanced position, playing a well-weighted pass into the channel for Willian to run onto. His action following the pass exemplifies the type of player that Tierney is, and the energy he injects into an Arsenal attack. Credit must also go to Willian for recognising the move – questions must be aimed at the Benfica defence and midfield for allowing Willian to break away relatively freely though.

In the final part of this particular analysis, we see Tierney completed his run after the pass to Willian and took up a brilliant position right on the corner of the box. Unmarked, he received the ball from Willian and was met by Taarabt who attempted to stop the Scottish full-back. After some tidy but agile footwork, he worked himself free of Taarabt before unleashing a deadly strike across the goalkeeper to bring Arsenal level again. While it may seem like a simple move, the nature of the goal is something Arsenal look to include in attacks wherever possible – have the full-back supporting the winger, whether it’s an underlap or overlap run to create a different avenue of attack. This was one of several chances created by the home side via attacks from the flanks.

Another way we saw Arsenal approach their possession included Granit Xhaka and Dani Ceballos. The midfielders operated as deep-lying playmakers of sorts when the Gunners had the ball – the ball would be moved into one of them in midfield when Arsenal looked to transition into an attack after winning the ball back in their defensive third.

In this example, we see the pair perform equally important actions to progress the ball up to Ødegaard near the half-way line. Shortly after Arsenal regain possession and look to transition, Xhaka dropped in alongside Gabriel and David Luiz to collect the ball. From here, Ceballos realises that he is of no direct assistance in his position, so opts to make a move away, dragging his marker along with him. This created space (highlighted white) for Ødegaard to drift into and receive the ball from Xhaka. Benfica’s lack of presence in midfield allowed for Arsenal to progress out of defence into midfield with fluidity, and should definitely be something they look to incorporate into their philosophy, especially against teams with fewer numbers in midfield.

It goes without saying, Arsenal’s victory is down to more than just Aubameyang and Saka, but the duo’s link-up play was deadly in this tie and ultimately won them the game. Saka’s vision and ability to thread a difficult pass was met by Aubameyang’s experience with positioning and timing his runs to perfection. Below we will analyse the two goals Arsenal scored thanks to this combination.

With 3 three opposition players between Saka and Aubameyang, the pass from the former would have to be precise with accuracy and hold a good amount of power – and it was perfect in both aspects. Another impressive element of this pass from Saka is that he waits just a split moment to allow his striker to get onside before playing the ball. From here, good timing of the run from Aubameyang is then met with a delicious finish. Despite Benfica having a strong number of players back in defence, there are some talents you just cannot halt, and at the moment, Saka is one of those talents – not many players would be able to play that pass in such a perfect fashion.

Above, we have a second example of this link-up. After a good short spell of possession in the Benfica third, Arsenal worked the ball out to Saka on the right flank, who then found himself a 1v1 situation. Remaining composed yet sharply alert, he performed quick stepovers before dropping his shoulder and cutting inside at an angle that allowed for an in-swinging cross towards the back post. Of course, yet again, Aubameyang was able to time his movement towards the post so perfectly to remain onside, but also quick enough to get ahead of his marker to win the header. Both of these examples relate back to what was discussed earlier about building attacks from wide areas where the space is, and force Benfica to commit some defensive effort out wide.

Arsenal’s Mixed Fortunes Out of Possession

When things are going their way, Arsenal are an energetic side, on and off the ball – especially in the attacking unit. In this tie, we saw instances of good pressing from Aubameyang, Smith-Rowe, Saka, and Ødegaard as an attacking unit. However, we also saw the midfield unit struggle both with pressing in the middle third, but also defensive duties in their own third.

This first analysis shows Arsenal’s midfield struggling in a defensive capacity, which resulted in Ceballos committing a foul – Benfica scored from the resulting free-kick. Weigl is the Benfica man receiving the ball, and while the movement is good, Arsenal could have very easily stopped this pass from reaching its target. Xhaka is exempt from criticism in this instance as he is tightly marking an opponent already. That leaves Aubameyang – who should apply more pressure to Benfica skipper on the ball before he can play the pass, and Saka, who leaves the gap open for the pass to be thread through; dropping a yard or two deeper would’ve cut that passing line out. Thirdly, Ceballos’ starting position is a strange one. There is no need for him to be in his own penalty area when the Arsenal back four is organised; he really should be recognising Weigl is unmarked in a dangerous space and he needs to shut him down a lot sooner than he did. Instead, he left it too late ended up committing the foul that resulted in the Benfica free-kick.

This final analysis segment is an example of Arsenal’s attacking unit being at the forefront of a successful press that resulted in a turnover in possession. Aubameyang and Smith-Rowe are the attacking duo applying the immediate pressure to the man on the ball, with their positioning and body shape forcing the Benfica man to either play a risky short pass to his teammate, marked by Bellerín, or hit a hopeful long ball. Granit Xhaka’s presence also strengthens Arsenal’s chances in this situation, as it gives them more probability of coming away with the ball. In the end, a long ball was attempted, and Arsenal intercepted it to regain possession.

It is very clear, not only from this performance but from Arsenal’s performance over the season that they still have a good number of issues that are causing them issues. In attack, they need to identify Ødegaard’s best role and position to bring the best out of him, as a more influential presence will pair nicely with the Saka-Aubameyang duo. Defensively, there’s a lot to work on – especially in midfield. A number of times in this game they attempted and failed, a press with either Ceballos or Xhaka involved, meaning they were out of position when the press was beat, allowing Benfica to run at the Arsenal backline. The victory was deserved in the end, and this competition may become the priority for Arteta’s side when you consider their poor league performances.