xG Gems: The three best centre-forwards in the Damallsvenskan

Scandinavia has been the home of some of football’s best talents in the men’s game. Teams like Ajax and Red Bull Salzburg have been known for producing and procuring the best talent from other nations and develop them into world-class players. FC Nordsjælland, FC Copenhagen, Molde, and Rosenberg have all been responsible for some of the world’s best talent.

Equally, the women teams in Scandinavia have players and teams that have taken the world by storm. Pernille Harder, Magdalena Eriksson, and Maren Mjelde are just three names to make it big in Europe. This data analysis will be a series of articles looking for hidden gems and talent in the Scandinavian leagues who could potentially be transfer targets for American and European clubs. We will start by looking at the Swedish top flight before moving to Norway, Denmark and Finland in later analysis pieces. Our first in the series will be finding the best centre-forwards from Damallsvenskan.

For this analysis, we will set a few parameters to create a realistic sample size of players to choose from. We will look at players from the first division with a minimum of 400 minutes across four main comparison metrics using data only from the domestic leagues. The results that you see are using percentile ranks which means that the number you see translates how a player ranks in the league.

Progressive Runs per 90 vs Forward passes per 90

Dribbles per 90 vs Successful dribbles %

These metrics will us find different profile of strikers and help determine who are the leagues best in them. We will come up with a shortlist based on the data and frequency of results. If a player is consistently ranking in the top end of the spectrum then we will consider them.

The first statistical comparison we are looking at is shots per 90 and touches in the box per 90. This comparison will identify and indicate a striker’s willingness and ability to get in the box and take shots. This doesn’t really tell us about any one particular type of striker but will tell us who is able to get into the right places at the right time and take shots. Once these players have been identified a further analysis of Expected Goals (xG) and goals can be used to conclude their real effectiveness.

These results indicate a high level of shot frequency and touches in the box, which means she’s more of a high lying forward that is comfortable receiving possession in high pressure areas.

Progressive Runs per 90 vs Forward passes per 90

Next, we’ll be looking at progressive runs per 90 and forward passes per 90 to look at the centre-forwards’ ball progression abilities and see if they are able to link up with the midfield. This actually becomes a very important statistic to measure because a number of systems are built around strikers who can get involved in the build-up to attacks not just being a presence up front.

Overall, the league has an average of 1.44 progressive runs per 90 which makes our three players extremely proficient in this regard. Similarly for forward passes, the league average is 4.68. Our three forwards have numbers of 6.50 or more. This is likely to come down to the team’s style of play.

Shots per 90 vs Expected Goals per 90

This metric comparison details a striker’s effectiveness in goal-scoring opportunities. We’ll find out whether the chances they created come from a high or low frequency of shots and thus figure out the striker’s clinical finishing abilities. These strikers prove their quality by telling us the probability of the shot becoming a goal. 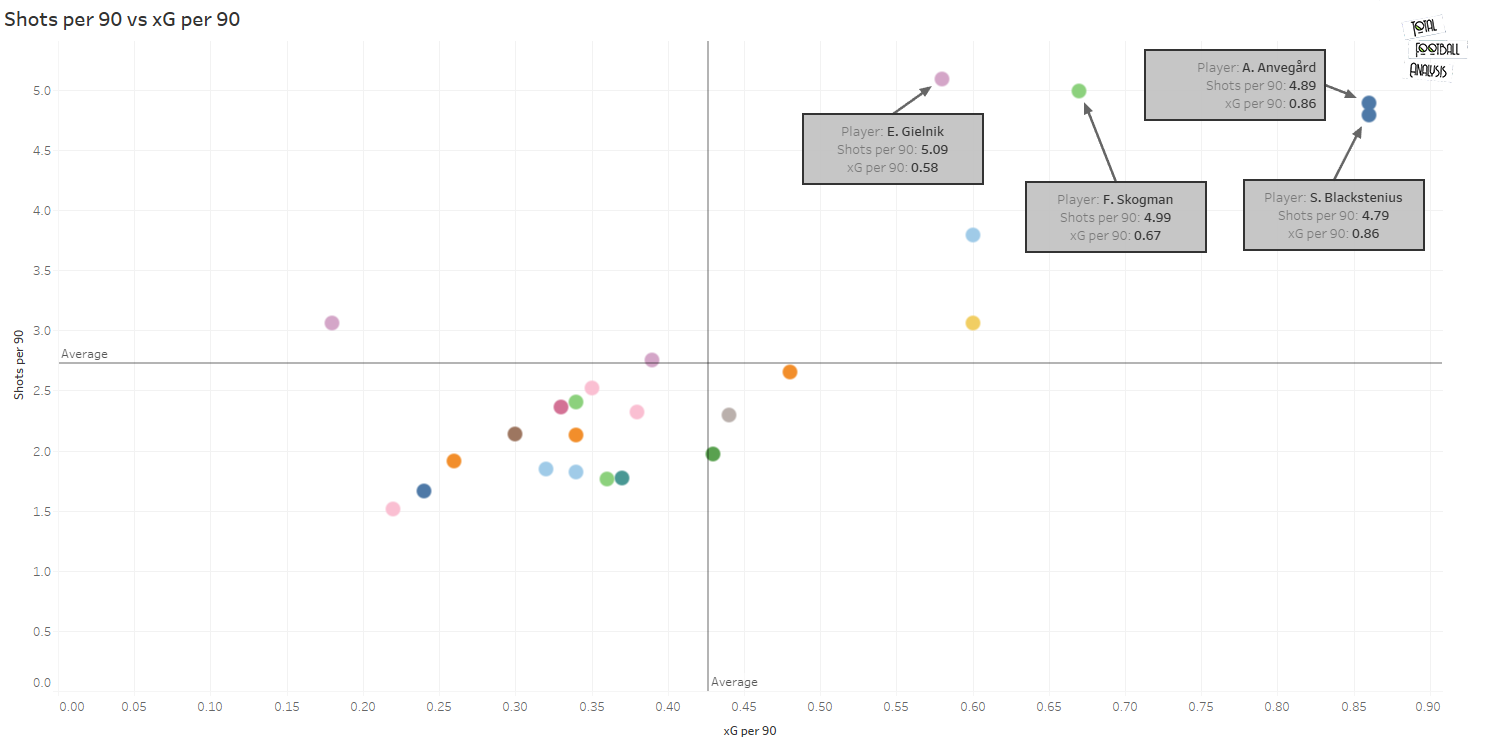 Dribbles per 90 vs Successful dribbles %

An important aspect of a mobile striker is their ability to dribble with the ball. It acts as a form of hold up play wherein the player can keep possession and progress it forward while the other attackers make off the ball movements. If you look at the likes of Sam Kerr or Marie-Antoinette Katoto, both are excellent ball carriers and enable their teams to find space because it forces the opposition to move out of position to focus on stopping the striker. 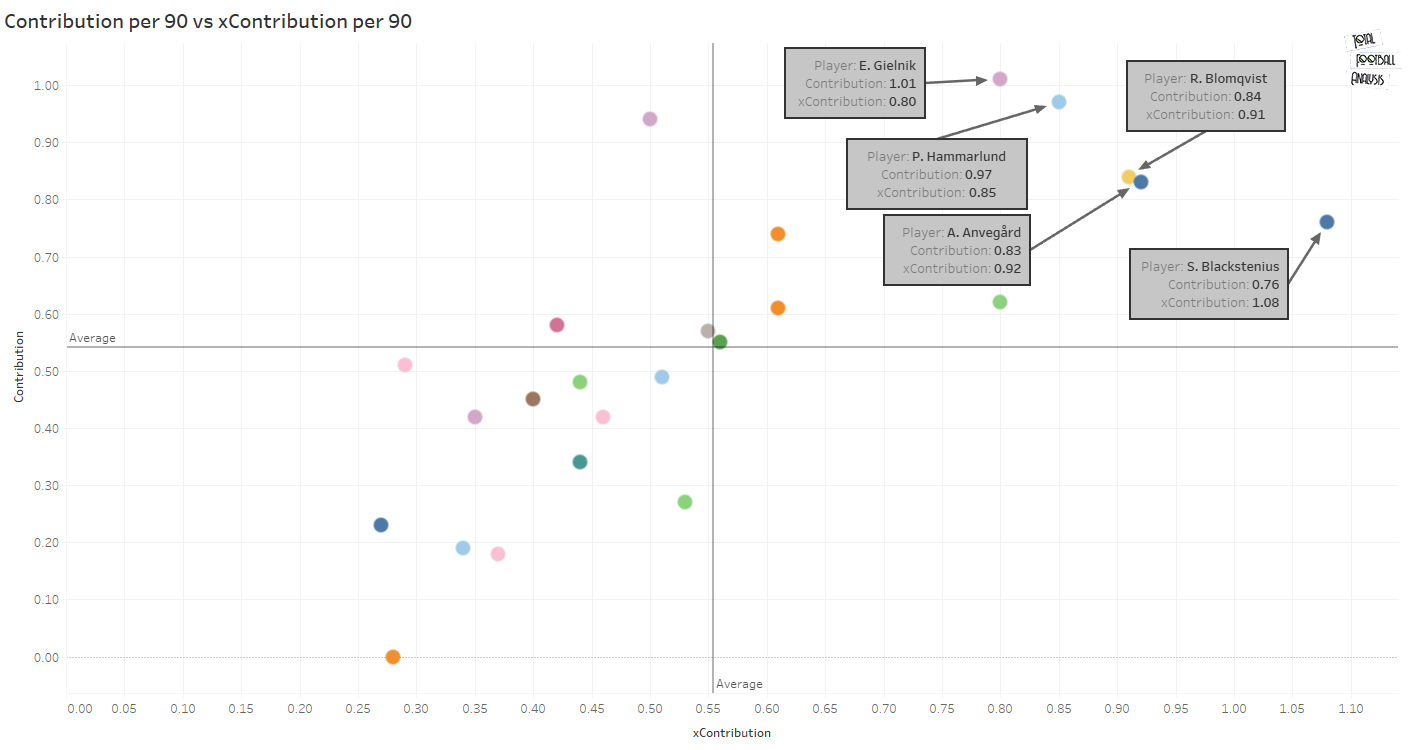 We can immediately see a separation between the highest and lowest performers in the league. We once again see some familiar faces in Anvegård and Gielnik who average 0.83 goals and assists per 90 with an xGoals + assists per 90 of 0.92 and 1.01 G+A per 90 from 0.80 xG+A per 90.

Similarly, we can see Blackstenius has popped up in yet another metric but this time with the highest xContribution figure of 1.08 but has a return average of 0.76. This means the striker is creating and contributing high-quality chances but isn’t as clinical.

The first centre-forward on our shortlist is Goteberg’s Stina Blackstenius. The Swedish international striker will be a familiar name to some given she played as Sweden’s number 9 at the FIFA Women’s World Cup in 2019. The 26-year-old is in the prime of her career and registered eight goals and two assists in a little over 1,000 minutes for Göteborg FC in 2020. In a nutshell, Blackstenius is a hybrid between a deep-lying and pressing forward. The centre-forward relies on her smart movement and positioning to move into the pockets of space to create pass receiving opportunities to then pick out overlapping players. A forward with good vision and creativity means she’s very effective in playing with a second striker or attacking midfielder. At Göteborg, she was deployed as one of the two centre-forwards in an uncommon 3-4-1-2 system that is rarely seen in it’s purest form.

Equally, she’s able to drive into the penalty area herself fashioning her own chances. This can be seen through her excellent dribbling and shooting statistics. The forward averages 5.40 dribbles per 90 with a 54% success rate and has 4.79 shots per 90 and not to mention 8.75 touches in the box per 90. This high frequency means she can develop into a very good complete forward.

Anna Anvegård is one of the most lethal finishers in the Damallsvenskan. The striker plays for Rosenborg and scored 16 goals for the club in 2020. The striker is more of a poacher who prefers to roam around the box and make short bursts forward and take shots. This can be seen from her high volume of shots with 4.89 shots per 90 along with an xG of 0.86. These results have been effective when you see a high number of goals (16).

The Swede has a 0.83 contribution an xContribution of 0.92 which is a very good return for a young player, which indicates there is a player that can link up with players around her. She has an excellent first touch and uses it to create even the smallest of spaces to get a shot away. Off the ball, she’s aggressive and can press defenders if the systems require her to.

Lastly, we have Australian centre-forward Emily Gielnik who plays for both Brisbane Roar and Vittsjö. At 6’0”, she is a big striker who uses her size and strength as the basis of her style of play. Though she isn’t a pure target-man but is a mix between that and a deep-lying forward where Gielnik can link up with her midfielders but also hold up the ball if needed.

This can be seen in her xContribution statistics which stands at 1.01 against a 0.92 contribution. That high goals + assists per 90 statistics show that her ability to create high scoring and high assisting type of shots and passes shows this. Additionally, we can see this through her progression ability with her 2.08 progressive runs per 90 and 5.48 forward passes per 90.

Lastly, the striker averages 5.24 aerial duels per 90 minutes with a 47% success rate which is an excellent return. She could do well in a league that a bit more physical given her physical stature and good hold-up play. To some extent, you can liken her play to Olivier Giroud of Chelsea, who is arguably one of the best in his role at the moment. Her ability to find space in the channels and bringing others into play is probably her strongest asset. With eight goals and five assists in the 2020 Damallsvenskan season, the Australian striker could be picked up by another side that needs a great hold up player.

We’ve only mentioned three strikers here but there are many more players who didn’t make the final cut because of fine margins in the data. The world of data is a goldmine when it comes to finding players for specific teams and systems and with the women’s game slowly moving towards a more data-centric approach to transfers, we’ll see more players from uncommon leagues being snapped up.

Having said that, the Scandinavian leagues are undervalued and underutilised, when there is so much quality to be bought. Brighton & Hove Albion Women of the FAWSL recently picked up Emma Koivisto from Naisten Liiga and has hit the ground running for the Seagulls. There are many more bargains and gems hidden away in the North Atlantic.