AFCON 2021: How Egypt knocked out Morocco thanks to a balanced tactical performance – tactical analysis

Egypt were successful in beating Morocco during their encounter for the AFCON 2021 quarter-finals following a long match that was decided during extra-time. The 2-1 final score does not really reflect the number of concrete goalscoring opportunities that came especially for Egypt. Moreover, it was a match in which the limits of Morocco were discovered even though this team had the abilities and the potential to reach a more advanced round.

Despite being deprived of some of their starting players especially in defence, with Mohammed El Shenawy and Hamdi Fathi being injured, Egypt were still able to stop most of Morocco’s attacking threats to secure their win. And at the same time, Mohamed Salah and Trézéguet were crucial in scoring the two goals to keep their team in the competition for another week and prepare for the semi-finals against Cameroon.

In this tactical analysis article, the focus will mainly be centred on Egypt’s solid defensive performance and how they alleviated Morocco’s attacks while analysing both teams’ attacking tactics at the same time.

Egypt started the match according to the 4-3-3 formation with Mohamed Abou Gabal as a goalkeeper, Omar Kamal, former Serie A and EPL’s Ahmed Hegazi, Mohamed Abdelmonem and Ahmed Fattoh in defence, Amr El Solia, Arsenal’s Mohamed Elneny and Ayman Ashraf in midfield with both Liverpool’s Mohamed Salah and Omar Marmoush playing on the wings to support the team’s striker, Mostafa Mohamed.

On the other side, Morocco preferred to start using the 4-1-4-1 formation with Sevilla’s Yassine Bounou as a goalkeeper, a defence composed of Achraf Hakimi, Romain Saïss, Nayef Aguerd and Adam Masina. Fiorentina’s Sofyan Amrabat played just in front of defence with Munir El Haddadi, Aymen Barkok, Selim Amallah and Sofiane Boufal forming a midfield line behind Youssef En-Nesyri, the team’s striker. 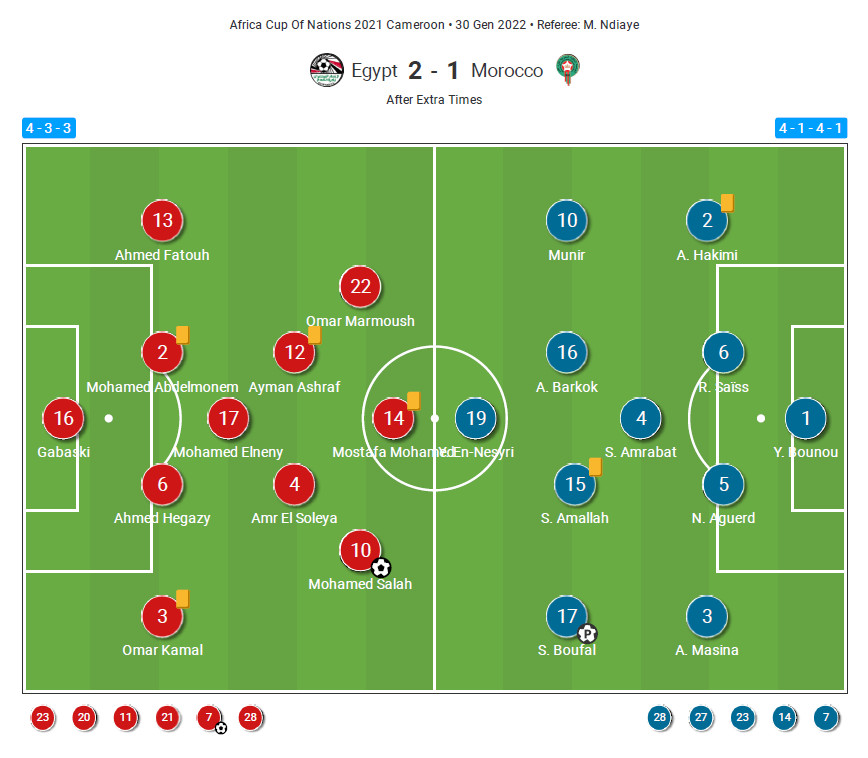 The Egyptians suffered from a bad scenario as soon as the match started since they conceded a goal at the 5th minute following a penalty that was awarded to Morocco due to a wrong tackle made by Ayman Ashraf on Hakimi. Soon after, Egypt started to show what they are capable of in attack by shooting on goal numerous times and threatening Bounou with some powerful and well-oriented shots. Egypt tried shooting 14 times in this match with only five shots on target. Yet, some of these shots were extremely dangerous and if not for Bounou’s excellent saves, Morocco could have conceded more than two goals in this match given that they left too much space for shooting in the final third.

As you can see in the following example, the space left between the defensive line and the midfield line was huge and Egyptian players were able to create a lot of danger using that space, especially when knowing that some of the passes and the movements were executed on purpose in order to free that part of the pitch and allow Egyptian midfielders to get the ball on that part of the pitch. 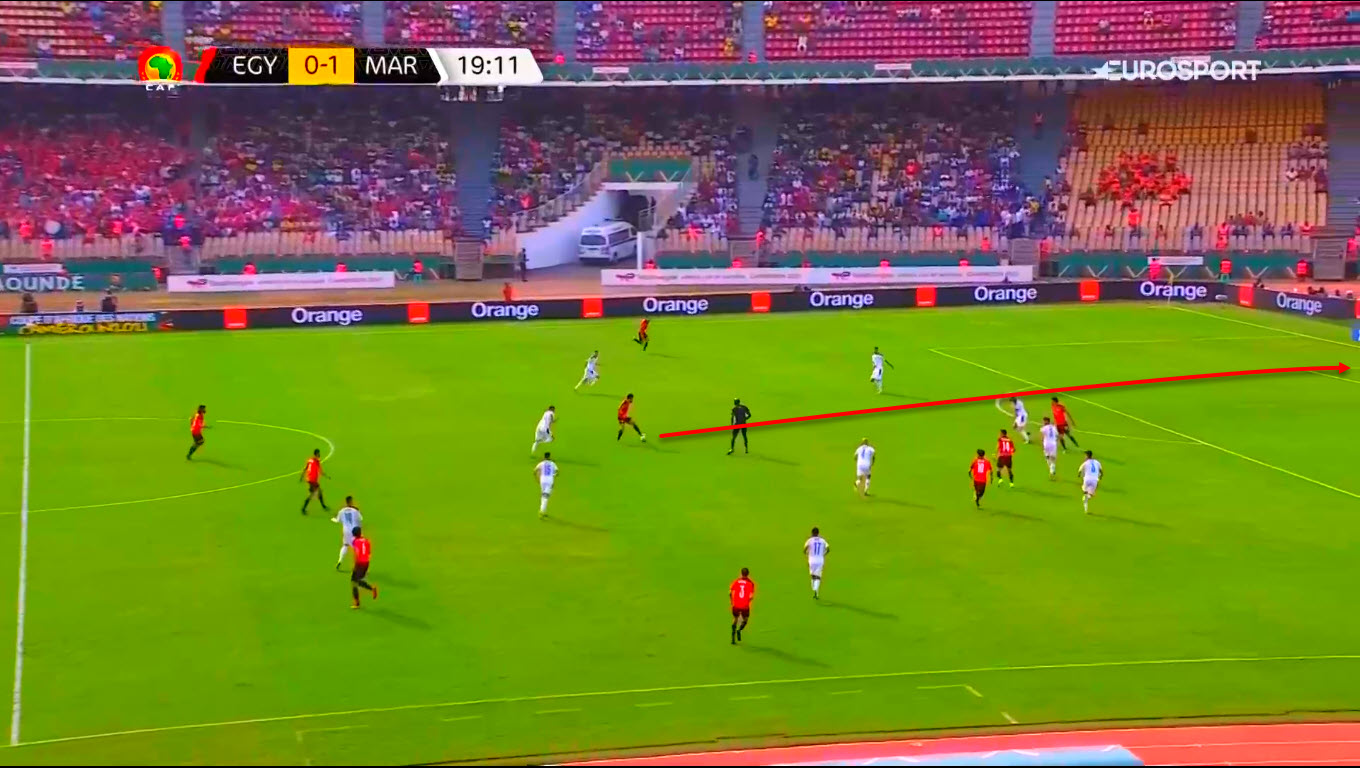 However, Egypt fell into the trap of precipitation on some occasions. In other words, they were able to exploit their chances in a better and more creative way to ensure goalscoring opportunities. Yet, they preferred to shoot from distance even when they were in non-suitable shooting positions or when being disturbed by opponents, which explains the big number of shots that went off target.

As an example, Mostafa Mohamed was in a hurry here and decided to shoot despite being disturbed and despite not being able to coordinate his body in the best possible way. A better alternative would have been to wait for Salah’s movement towards the back of the defenders and give him a through pass, to exploit his speed and why not result in a one-on-one situation with Bounou. 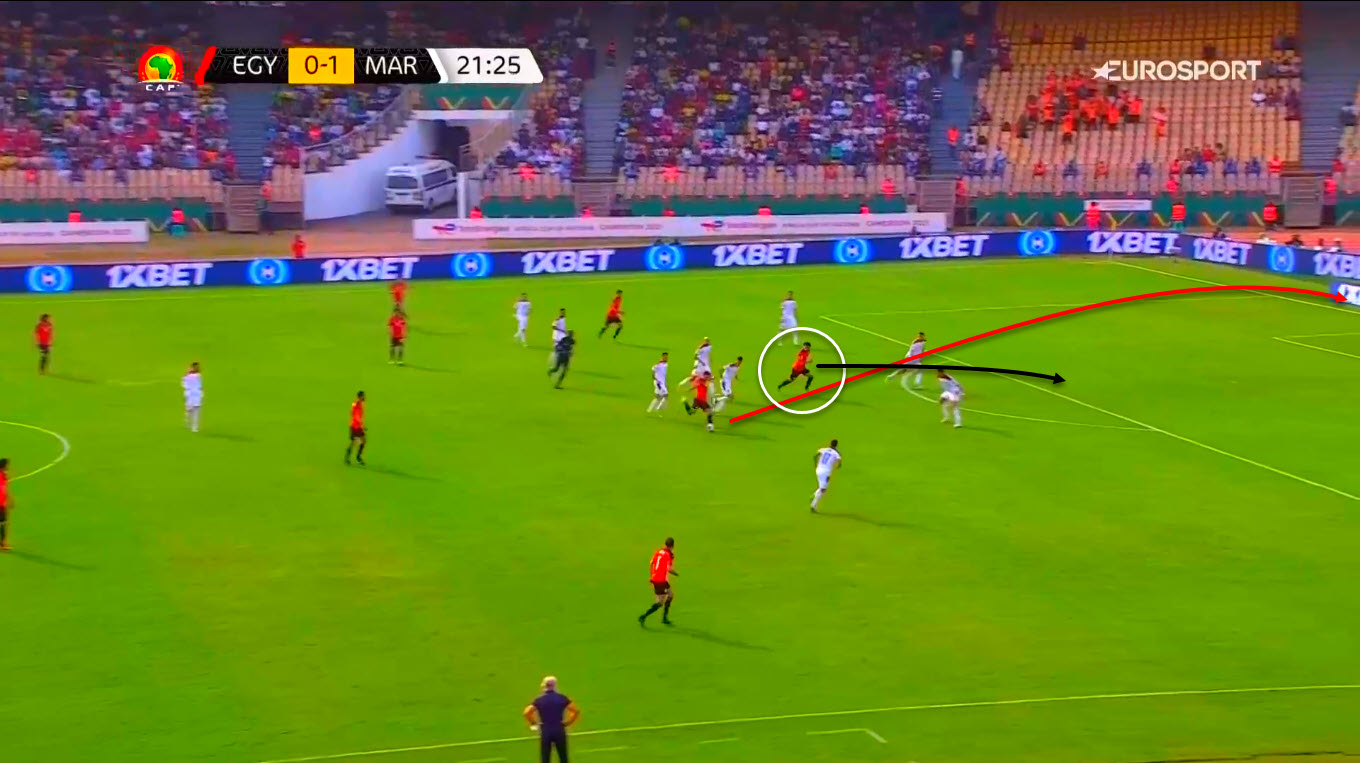 Nevertheless, Egypt did not give up despite missing numerous opportunities in the first half. And they succeeded in equalising at the 52th minute from a corner-kick that Salah put inside the net after Bounou saved Abdelmonem’s powerful header. Egypt retreated following their equalising goal and preferred to rely on counter-attacks and let Morocco play and threaten their goal. This was at the same time risky but successful since Egypt knew how to defend against Morocco’s attacks and at the same time they avoided the dangers of playing with an advanced defensive line since they were aware of Morocco’s quick and crucial attacking players.

Egypt waited until the 99th minute to add a second goal and kill Morocco’s hopes of qualification thanks to an excellent attack initiated by Ahmed Sayed who exploited Morocco’s high defensive bloc and gave a through pass to Salah who likes to find himself unmarked in order to cut inside and create danger. Morocco’s defenders were almost in the middle of the pitch and therefore Salah had so much space in front of him.

He exploited the occasion and got rid of the marking of three players who were behind him, giving Trézéguet an excellent through pass that only needs one touch to be scored. 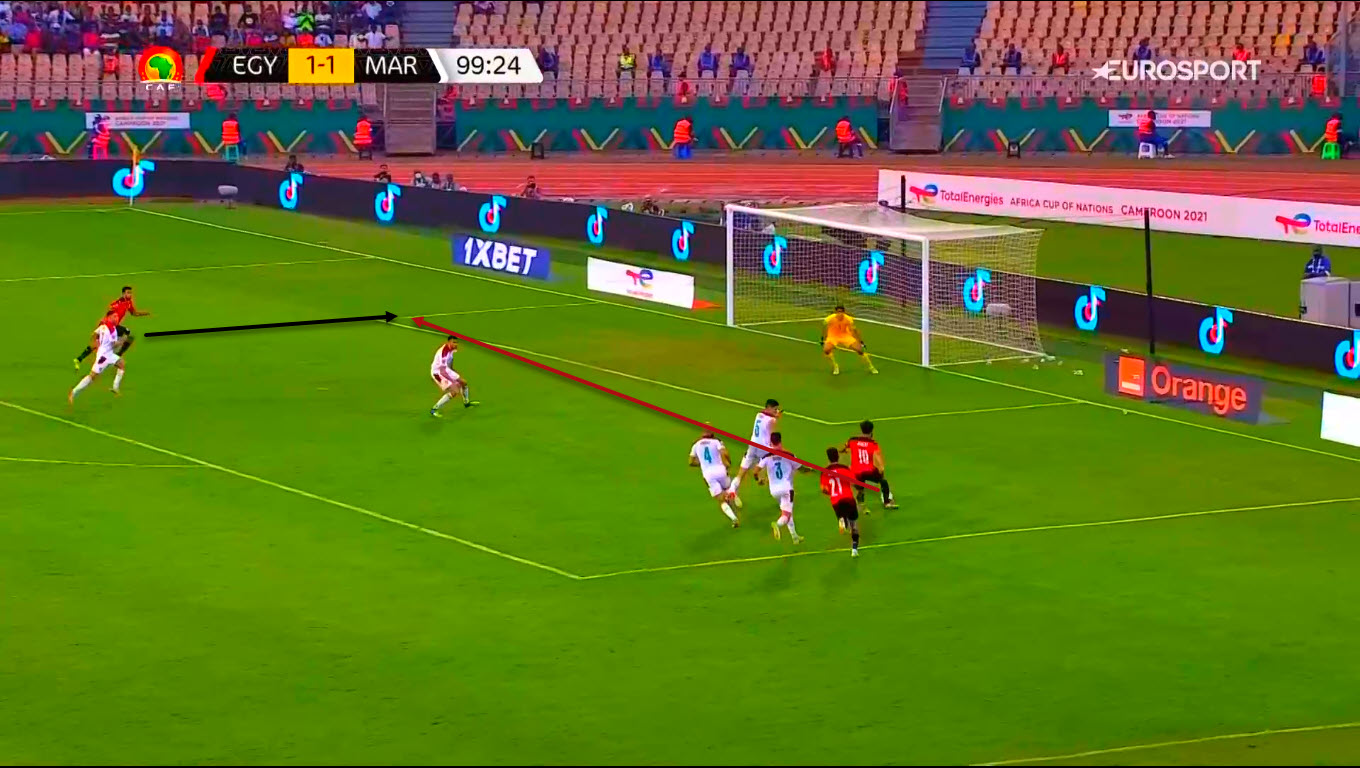 Following this second goal, Egypt had the opportunity to add a third goal at the last minute of the match after Bounou left his goal. However, the Egyptian players shown below missed a very easy goalscoring opportunity in a strange manner following a badly-dosed pass from Ramadan Sobhi to Salah who wasn’t able to catch the ball and put it inside the empty goal. 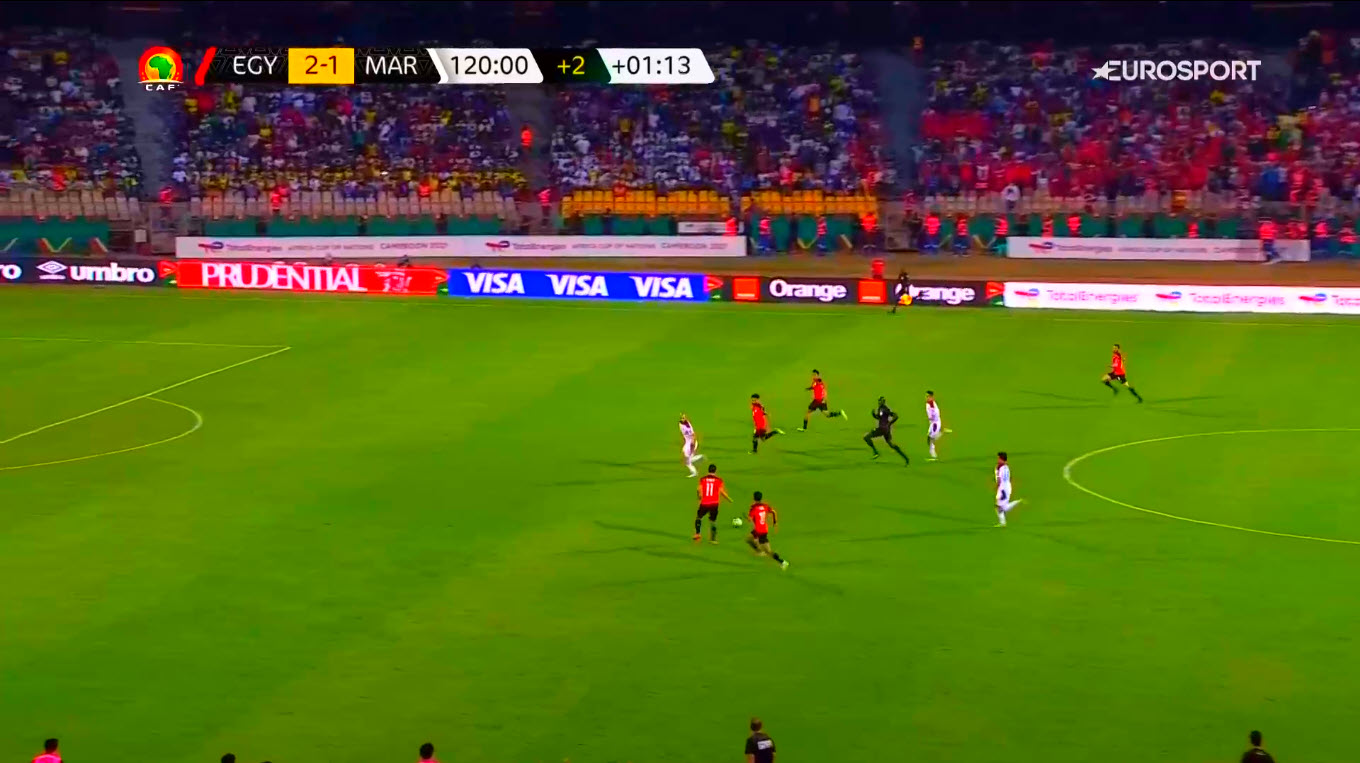 Morocco did not play a bad match but lacked the experience as well as the adequate attitude to win such crucial and complicated games. This was always Morocco’s main issue during such big occasions. Despite the work done by their coaching staff headed by Vahid Halilhodžić, the individual play and the lack of collective balance was something that lacked this team in this competition. It was not sufficient to have one of the best right-backs in the world at the moment and some of the best Arab players when compared to the other Arab countries in order to reach the semi-finals or the final of the AFCON.

It is true that Morocco convinced many followers of the game during the group stage by winning convincingly. Yet, their issues appeared during the knockout stage when a single match decides the fate of teams. Morocco were not able to protect the advantage they had since almost the start of the match. They left too much space for Egypt to attack and did not mark their players in the required way, letting dangerous players like Salah touch the ball regularly and advance without imposing numerical superiority on him in order to stop him and alleviate the danger that he could create.

Morocco preferred to play an open game and try adding a second goal while not focusing a lot on the defensive aspect of the game. This cost them the match because they thought that they would be able to add a second goal and end Egypt’s comeback chances. Anyway, it was a big mistake to continue playing with a very high defensive bloc even when the score was 1-1, risking a lot for something that is not guaranteed.

As you can see here, Morocco’s defensive bloc was so high during Egypt’s second goal action, which facilitated the mission for a player who loves such situations like Salah. 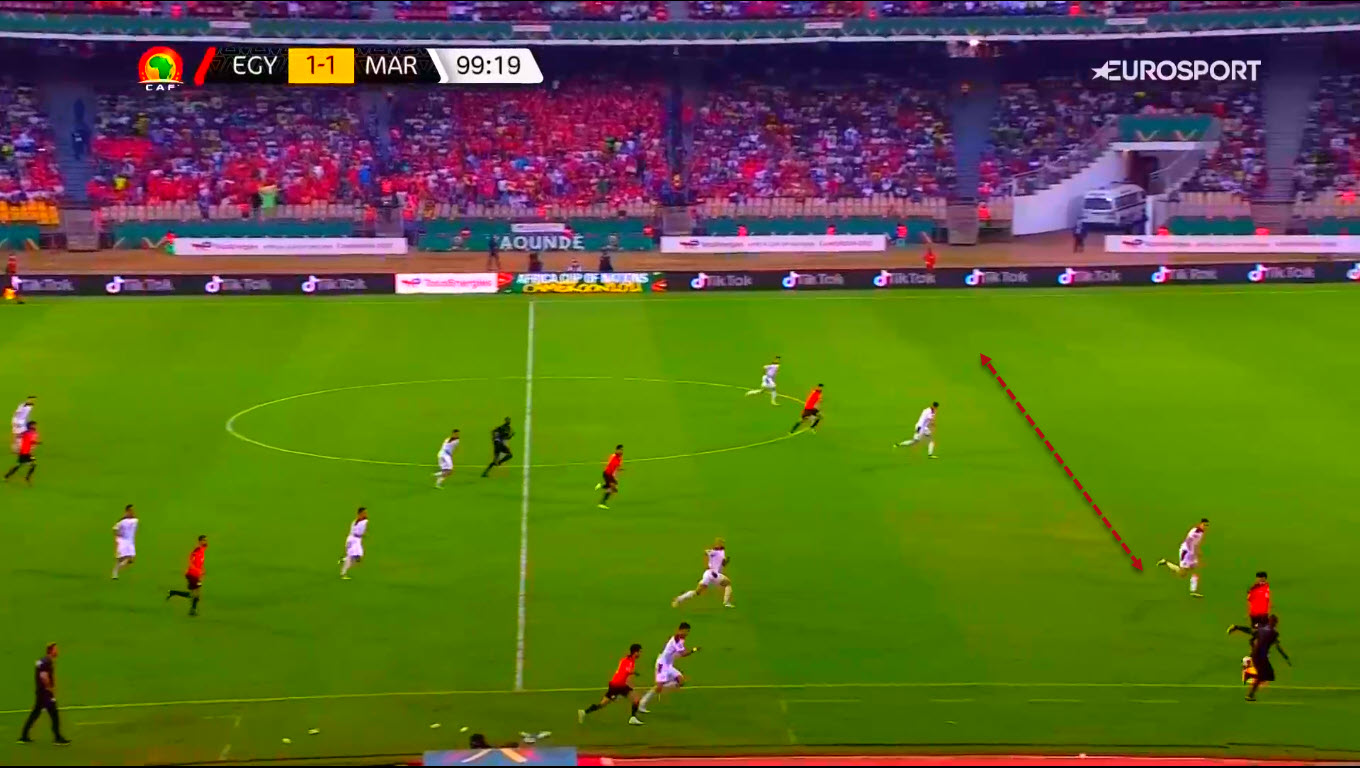 Nevertheless, Morocco were very close to scoring in the second half of the game when Nayef Aguerd sent a powerful header towards the goal and Mohamed Abou Gabal was successful in saving his team from a crucial goal at the 80th minute, with the help of the crossbar. It was definitely the most dangerous chance for Morocco even though they shot 15 times with just four times on target. 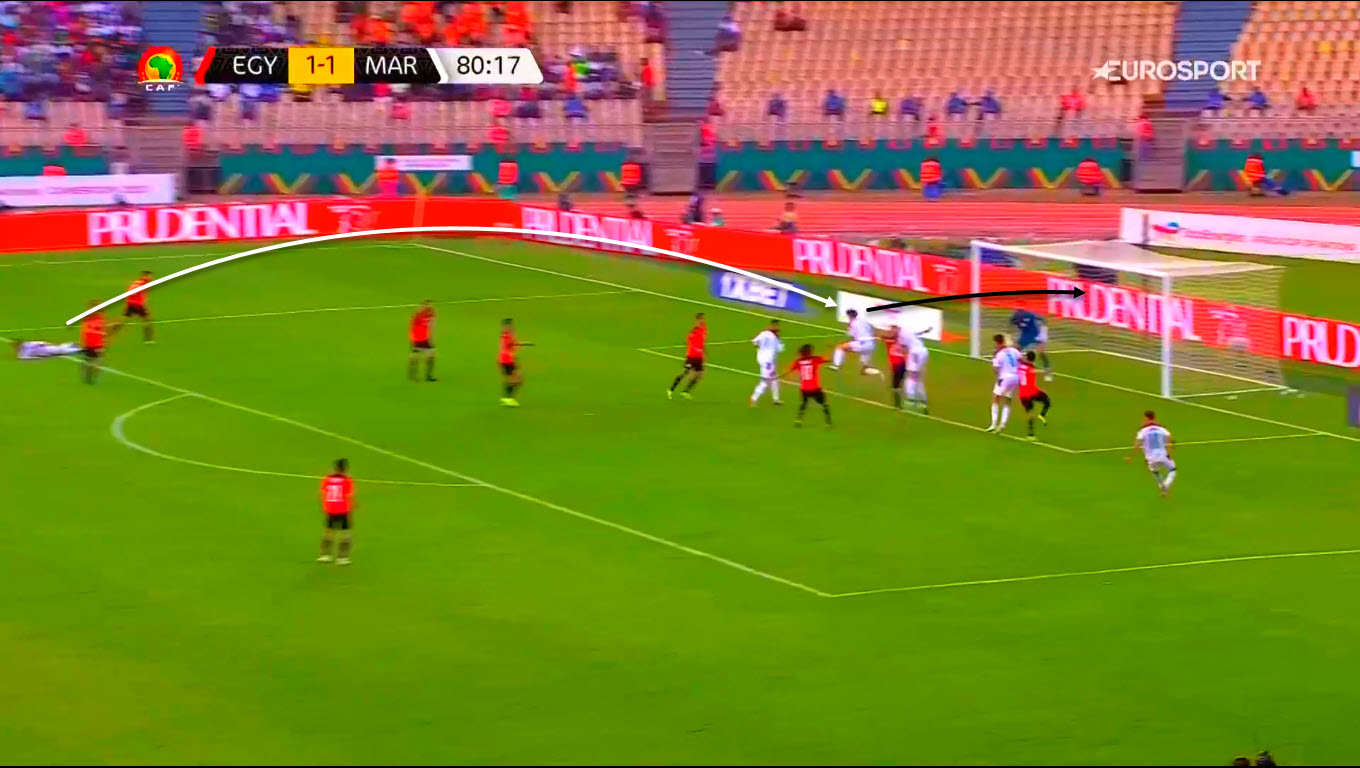 Egypt are through to the semi-finals and will soon meet the hosts, Cameroon, in a very difficult match for both sides. It will be the most adequate chance for the Egyptians to show once again that they deserve a ticket to the final and that they are still one of the best teams in AFCON historically.

For Morocco, the team needs to revise a lot of things in relation to approaching such big matches as they will need to fix things quickly since they will have to be ready for the FIFA World Cup qualifiers play-off next month.