The biggest game of the 2. Bundesliga this season took place in a stack of top matches on Sunday afternoon, with Hamburger SV host Arminia Bielefeld at a sadly empty Volksparkstadion. The race for promotion is heating up in the closing stages with Bielefeld holding a seven-point advantage over Hamburg. The two sides enter coming off draws to Greuther Fürth and Osnabrück respectively, both conceding goals in stoppage time.

This tactical analysis, we will assess the tactics used by Hamburg and Bielefeld. How Hamburg was able to create multiple high-quality goal-scoring opportunities, and also take a look at the Bielefeld defence which wasn’t particularly convincing. 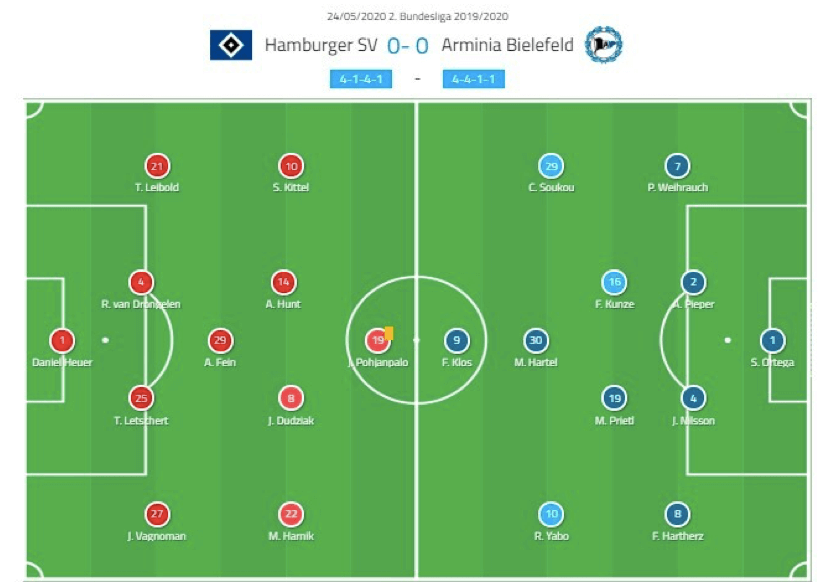 Dieter Hecking made several changes from the side that drew at Greuther Fürth last Sunday. Rick van Drongelen returns to the heart of the defence with Jordan Beyer making way. Sonny Kittel played a half in Fürth; he would return to the starting 11 in a straight swap for Bakary Jatta. The final change saw striker Martin Harnik play in an attacking winger role as Jairo Samperio misses out.

Uwe Neuhaus through a couple of surprise changes which may have caused a curveball in Hamburg’s preparation. With Cedric Brunner out due to a yellow card suspension, who would start at right-back? Tom Schütz and Jonathan Clauss seemed the likely options. Yet, Neuhaus opted for former Bayern Munich junior Patrick Weihrauch; this is his first appearance of the season. The before mentioned Clauss was dropped to the bench in favour of Cebio Soukou whilst Nils Seufert was switched for Fabian Kunze.

A couple of seasons ago under then-manager Christian Titz, Hamburg played a particular possession brand which heavily featured the goalkeeper within the build-up play. On countless occasions, then number one Julian Pollersbeck would virtually become a sweeper as the last line of defence pushes to the edge of half-way. We would see situations of Pollersbeck bringing the ball unchallenged before playing the ball. It would seem some of the concepts of Titz-ball have crept into Hecking’s tactical play. Here we will break down the usage of keeper Daniel Heuer Fernandes and his increased role in the build-up. 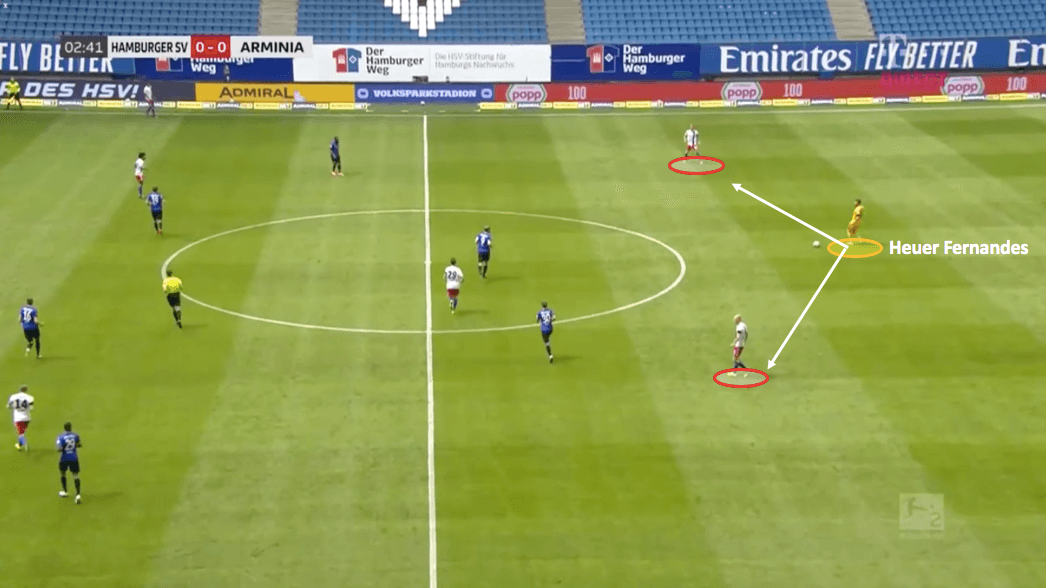 In the early stages of Hamburg’s build-up play, we will see Heuer Fernandes actively used. This occurs when Arminia Bielefeld isn’t pressing, which allows for the positioning of the Hamburg goalkeeper to be less precarious. In most cases, the full-backs Tim Leibold and Josha Vagnoman push-up alongside the central midfielders. This gives Heuer Fernandes a couple of outlets, one being the centre-backs van Drongelen and Tim Letschert, or if space opens up play a central ball to Adrian Fein. 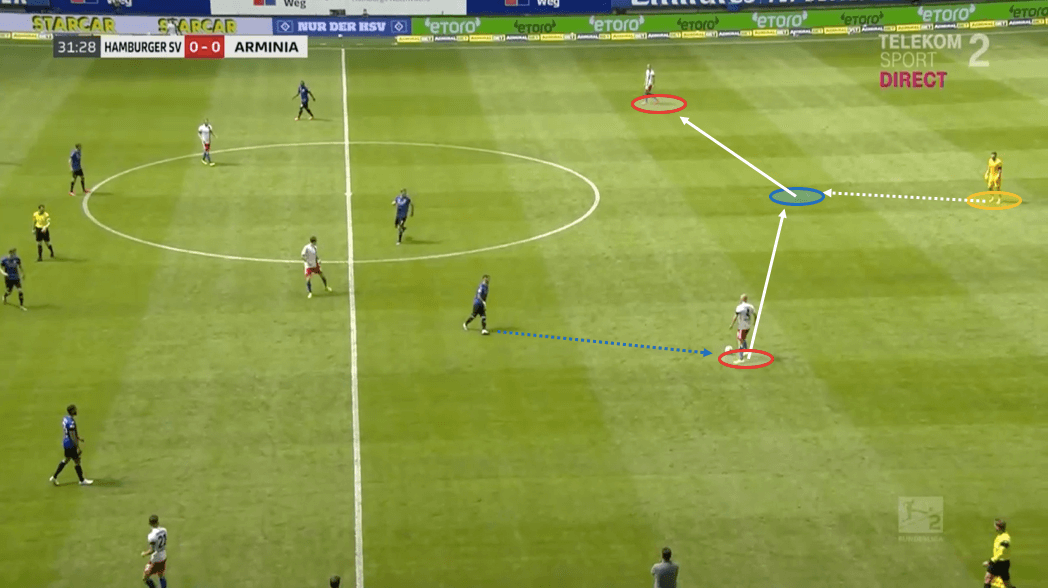 Heuer Fernandes can also be seen as a cog for switching the play as seen above. For this to transpire, van Drongelen looks to draw the press from Marcel Hartel. Then the ball is played to Heuer Fernandes. This opens up space, and as the Bielefeld players get attracted to the ball carriers in the chain, then areas begin to open up. The usage of Heuer Fernandes is becoming more and more prominent; on Sunday the Hamburg keeper completed 113 passes.

Heading into this match-up, Bielefeld owns the pleasure of being the best defensive side in the 2. Bundesliga with only 25 goals conceded. Bielefeld plays with a back four, with the changes coming in midfield and on most occasions striker Fabian Klos is isolated up-top. The defensive pairing of Joakim Nilsson and ex Borussia Dortmund graduate Amos Pieper has been a winning combination at centre-backs while Florian Harthez and usually Brunner play competent roles out wide. This section of the analysis looks to dissect Bielefeld’s defensive shape on Sunday. 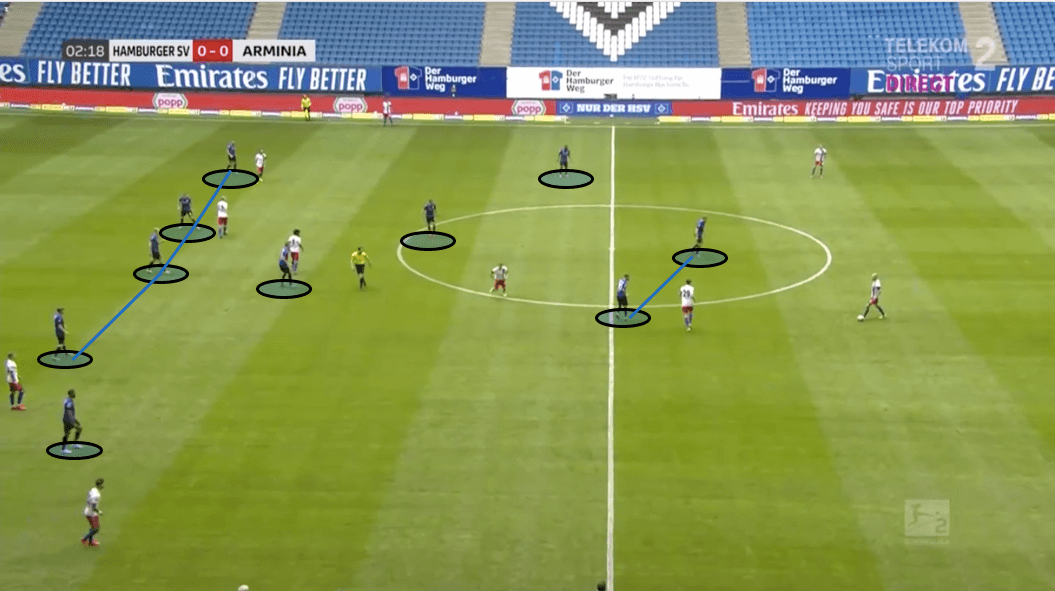 For the opening 60 minutes, Neuhaus implemented a 4-4-1-1 formation. A system that has been rarely used by Bielefeld this season. However, the defensive shape is fluid, and we will see the number 10 Hartel given free license to press alongside Fabian Klos. At times, it looks more of a 4-4-2 when Hartel comes up to challenge the ball carrier or support Klos in keeping Hamburg from entering their defensive half. 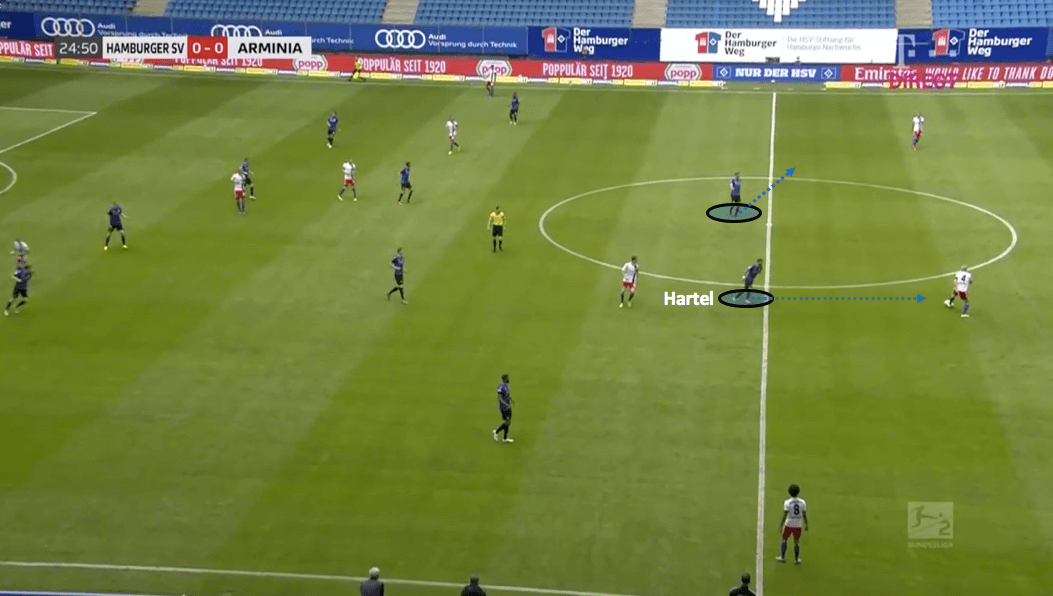 Again, as shown in the image above, we see this principle applied. Hartel will come-up to support Klos. With van Drongelen on the ball, Hartel immediately looks to press the Hamburg defender while Klos fans out to his left to cover the movements of Letschert. 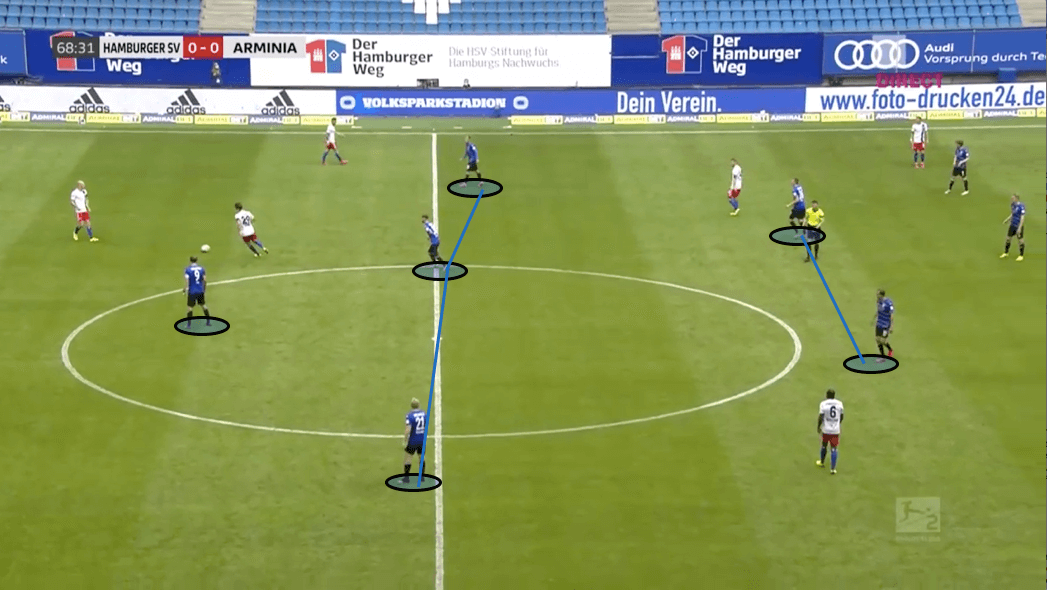 During the second half, Neuhaus made a couple of changes with Andreas Voglsammer and Jonathan Clauss coming on for Reinhold Yabo and Soukou. This resulted in a shift in formation to a more accustomed 4-2-3-1. Hartel is playing alongside the wingers while Klos takes more responsibility in the pressing game.

We’ve mentioned that Bielefeld have a solid, sound structure defensively and throughout the season have showcased why they are the best in the league. However, Hamburg had great success transitioning from defence to offence and catching Bielefeld on the back foot. Here we will look at what Hamburg brought to the table through quick transition play and other avenue’s used to break Bielefeld’s defensive shape. 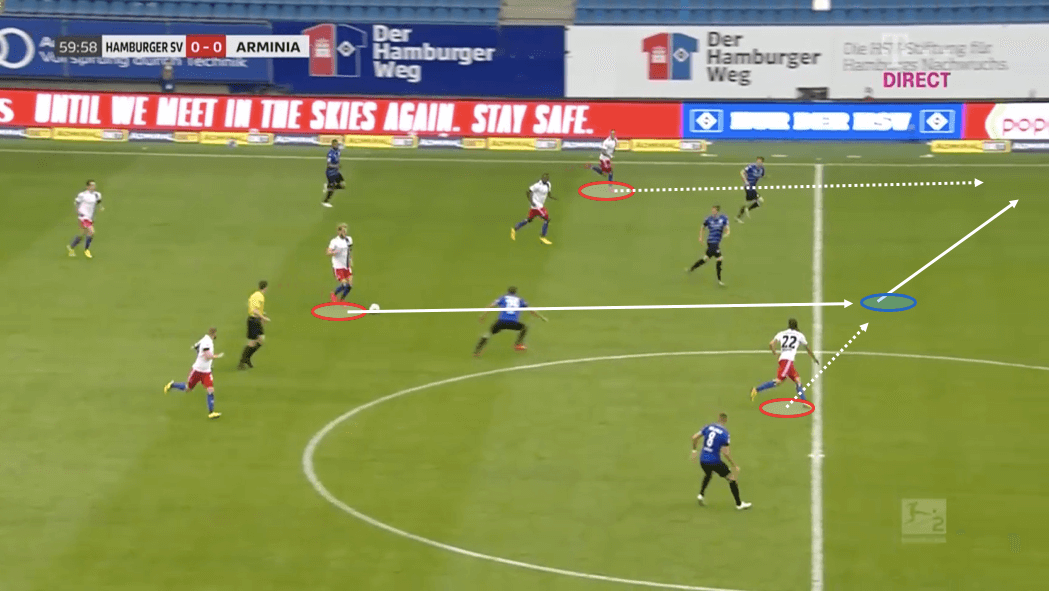 We have three examples in this section; showcasing transition through the middle, switching the play via diagonal balls and entries from the final third. Hamburg was able to catch Bielefeld off-guard when they transitioned quickly after winning possession back. They were able to find numerous midfield players trying to cheat on the play, resulting in a quick transition. Here, Letschert has taken advantage of the space in front and leads Harnik into a pocket behind Manuel Prietl and Kunze. As Harnik takes possession, Sonny Kittel becomes an option as he passes Weihrauch who is out of position. Two quick passes and Hamburg were able to enter the final third. 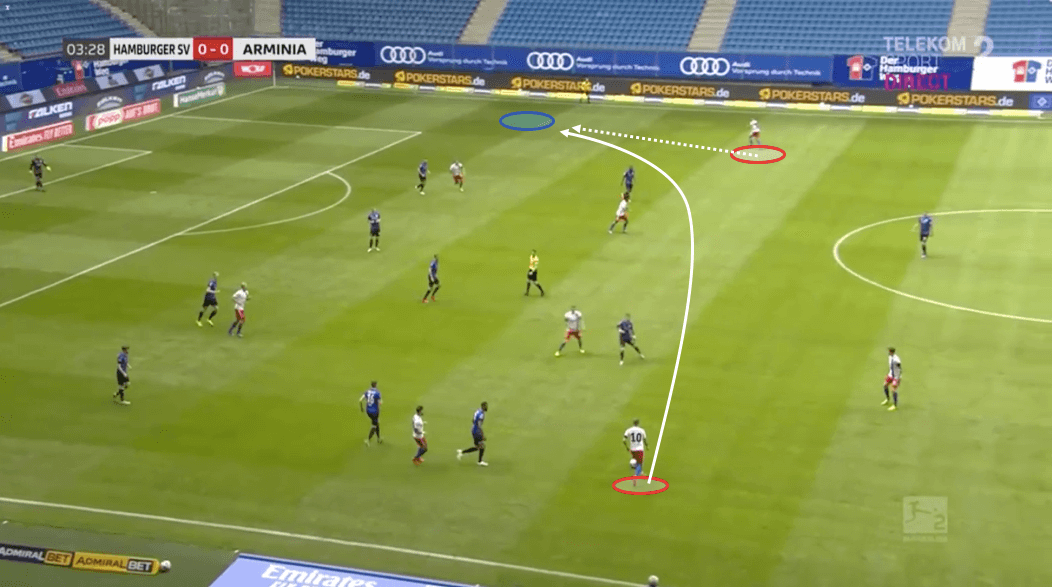 Kittel is involved in our second example. Like many teams in the 2. Bundesliga tends to do tactically, soft overloading of the ball-playing side either forcing a retreat from the team in possession or switching of the play. In this example, as Yabo comes to defend centrally, this allows Vagnoman to get out the back and take the space left by the compactly Bielefeld defence. Kittel produces a fantastic ball to find Vagnoman in space and Hamburg can put a ball into the box. 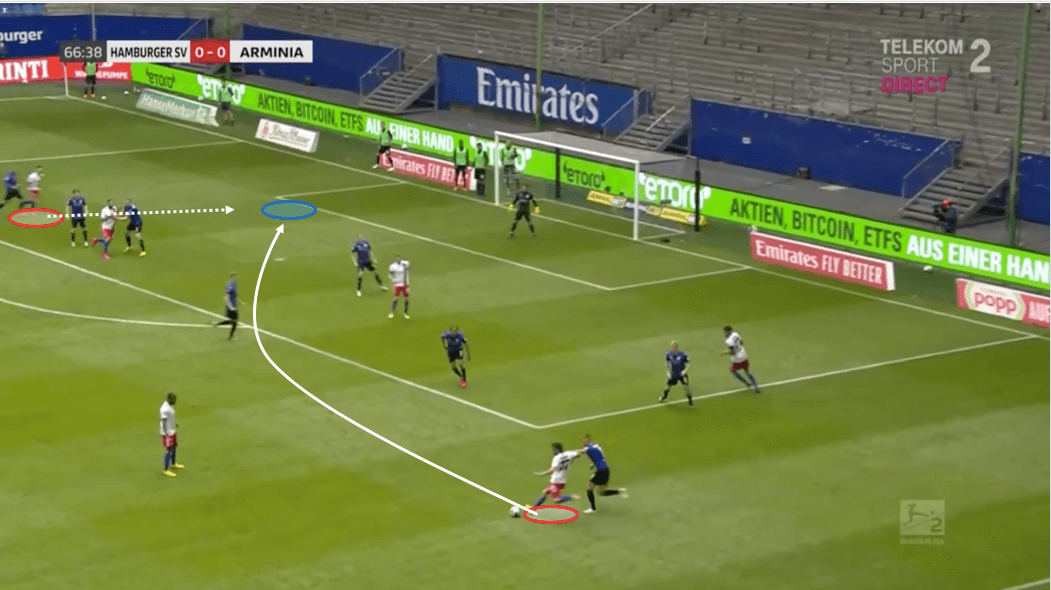 How about Hamburg in the final third trying to find an avenue to the goal? Arguably the best chance of the second half for Hamburg, Harnik who played a crucial role in this match can cut onto his left and led his teammates to the edge of the six-yard box. Lukas Hinterseer has two players man-marking, but Leibold has beaten Soukou to a goal-side position and can attack the highlighted area. Leibold does so with his effort hitting the frame of the goal. It was evident that the harmony between full-backs and wingers for Bielefeld became exploitable for Hamburg and they did so at will. While they lacked the final product, Hamburg picked up plenty of positives from their attacking output.

Good, sound goalkeeping is imperative and can be the difference between a clubs promotion push or languishing in mediocrity. In a game where Arminia Bielefeld were soundly beaten for significant periods, they were bailed out by the super-human performance of Stefan Ortega Moreno. Ortega is known for his hulk-like stature physically, but more importantly, he plays a vital role in Bielefeld’s promotion push. On Sunday, he was Bielefeld’s best player by a country mile. Let’s see how he accomplished the clean sheet and an essential point for Bielefeld. 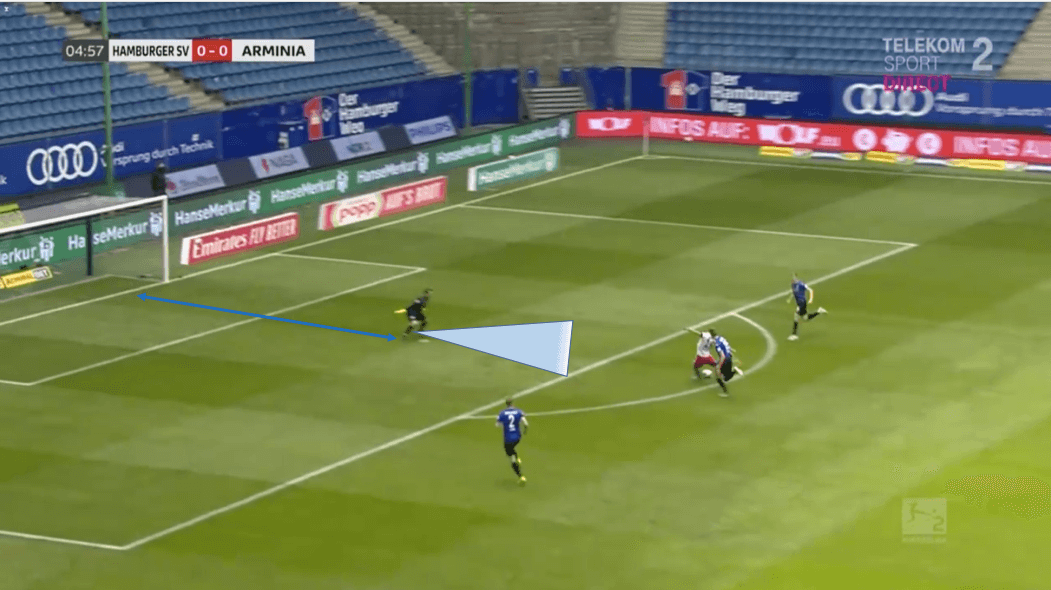 The first example was the save of the match, considering how early it was in the game; it set the stage for Ortega. It all started from a Steven Gerrard type slip from Kunze and Joel Pohjanpalo has a 1-v-1 with Ortega. Immediately, Ortega takes a proactive approach with his positioning parking himself on the penalty spot. Pohjanpalo shoots and Ortega makes an excellent save with his right boot. There are several different avenues to goal, including trying to chip or a curling effort around the midriff. Yet, as Ortega makes himself big, it minimises specific options for Pohjanpalo. 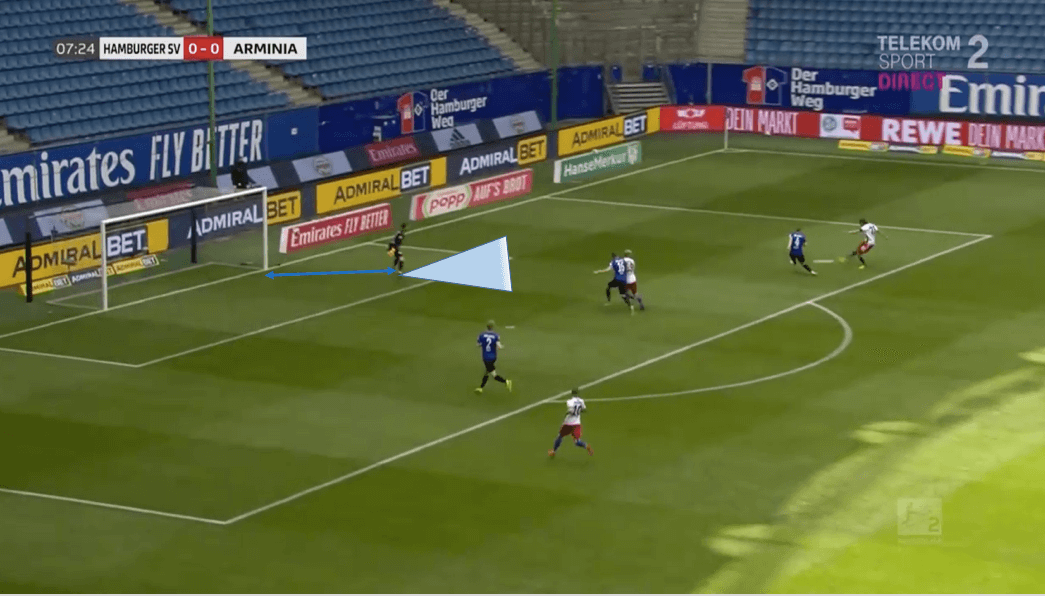 Our last example is another case of good positional play by Ortega to make the save. Unlike the first situation, Ortega remains in the six-yard box with Harnik attacking the area. The Bielefeld shot-stopper covers his near post and again, uses his large frame to give the perception to the striker that there is a lack of shooting options. Harnik goes near post with Ortega making a good save.

Ortega made it to Kicker’s team of the week for only the third time this season, but his performance on Sunday in Hamburg was his best for the season. His goalkeeping has been decisive throughout this season, and on this occasion, it helped secure an important point.

It would be hard to argue that Hamburg weren’t the better side, the ability to move the ball freely through midfield and create high-end chances. The only problem is that Hamburg faced a goalkeeper in top form, another day and we would sing the praises of a Hamburg victory. The positive is Stuttgart’s defeat at Holstein Kiel means Hamburg now move a point head into outright second.

The sense is Bielefeld were pleased to secure a point, the first two games from the restart have been ok. Defensively capable but the best attacking side in the 2. Bundesliga hasn’t hit the ground running. Some difficult fixtures await the Ostwestfalen side which includes a stretch of five fixtures in nine days. Seven-points is the lead to Hamburg; can Bielefeld secure their first Bundesliga season in 11 years?