In his first two seasons for Talleres Córdoba after leaving River Plate, Facundo Medina established himself as one of the best young centre-backs in Superliga. His performances for the La T didn’t go unnoticed, and several European clubs started lining up, battling for his signature. This young Argentinian’s composure, ball-playing ability, and smart defensive plays show that he might be one of the best centre-backs for Argentina in the next decade. In this tactical analysis, I am going to analyse his defending, playmaking abilities, and what makes him one of the best progressive ball carriers from the centre-back spot in Superliga.

Medina’s defending style of play is different from the most centre-backs in the league, he being 5’11 and having natural quickness allows for the aggressive, risky decisions.

Medina is left-footed centre-back, and thus he mainly occupies the left side of the pitch. In the image below you can see his heatmap for this season, and it’s evident that he occupies the whole defensive third, with an occasional presence in behind the half-way line. The colour indicates how much time Medina has on the ball, and he is indeed the third centre-back in the league in terms of completed passes per game, amounting to 64,38 with 85,01% accuracy.

He is aggressive on the ball and doesn’t hesitate to step out of the defensive line to intercept a pass or to put pressure on the receiver. This is a risky way of playing, and you can see in these examples below. The player receives the ball in the central area, and Medina immediately decides to push up and try to get the ball, even though he does it at the cost of leaving another player right behind him.

His agility and speed compensate for his aggressive movements, but not to the full extent. When he puts pressure on the opponent, it becomes vital that he has right body positioning to limit the passing angles through which the opposition can play, and the risk of being outplayed is still high.

In the example below Medina leaves the defensive line after the pass is played to the centre from the player on the wing. The space behind him can be easily exposed if the one-two passing combination manages to go through, and Medina realises this puts his leg up in the right moment and the attempted pass is deflected. This proactive style of defending requires great spatial awareness and quick decision-making because every mistake might be costly. The centre-back needs to read the game well, limiting the passing options and the opportunity for an attacker to turn and change direction.

Medina’s mobility and awareness of where the next pass might be played to become the key components when it comes to interceptions. He makes 5,14 interceptions per game along with 11,52 recoveries, and him getting in the way of the attackers creates a lot of trouble for the opposition.

In the shot below you can see Huracan’s counter-attack in the closing minutes, and Medina leaves his position to put pressure on the attacker. Huracan have one man running in behind, and the player on the ball expectedly tries to play it through to him. Medina was in the half-position in order to be able to track the player on the ball down if he decides to change the direction of his run. In the moment of the pass, Medina puts out his leg and intercepts the ball.

He knows how to close down players when they are trying to play through or go through on goal themselves, and I think him constantly stepping out of the line bears fruit.

In terms of tackles, Medina goes for it only when he is sure there is no other way, for example when an opposing player is running near the touchline or is getting the ball too far away from themselves. He rarely tackles opponents when he has an upright body, most of the time he does sliding tackles, trying to reach his opponent.

At the age of twenty, Medina already has the kind of dominating presence you would expect from a world-class centre-back. Despite being only 5’9, he has a great jump and takes off the ground really well, which helps him tremendously in aerial duels.

He has the same strategy with aerial duels to what we saw in the previous paragraphs of this analysis, with the desire to get upfield and clear the ball out. He also likes to gain some advantage over his opponent by getting in front of him. His agility and balance allow him to coordinate himself. Medina uses his hands to pressure and disbalance the opponent before he receives the ball, as well as using slight body contact. His anticipation and reading of the game help him to prevent through balls, passes into penalty area or crosses.

In the image above you can see Medina’s anticipation skills. After the pass goes through the defender’s legs, Medina quickly spots the danger and gets himself in front of the striker, intercepting the ball and clearing it away.

Below you can see the map with all his clearances for the season, which mainly occur across the whole left side of the own half. The interesting thing to spot is that recoveries through the right positioning, effective counter-pressing, and interceptions are spread out somewhat evenly.

In the next section of this scout report, I will analyse Medina’s ball-playing abilities.

Medina is one of the best ball-playing centre-backs in Superliga, possessing a wide passing range. He can perform passes of different length and height, which becomes extremely helpful for his team in the build-up, and expands the coach’s tactics.

Statistically, he makes 6,95 long passes per game and 7,33 passes to the final third, ranking third in the league for progressive passes with 14,34 per 90 minutes. He can release the attackers with a pinpoint pass, like in the example below. Medina sees the attacker’s run and executes a great pass in behind the defence. His deliveries are not that consistent yet, and he has some games when he is not able to get the ball where he would like it to, but the consistency comes with experience.

His forward passes can break opposition defensive lines and thus help his teammates create opportunities after a couple of passes. In the example below, Medina plays the ball to the striker, who then lays it off for the arriving teammate, and due to the opposition players reacting with a big delay, their body positioning leaves much to be desired. This attack didn’t go through because of the bad delivery of the striker, but it proves the point of Medina’s passing ability. The passing technique of Medina makes him capable of playing the ball to different areas with accurate deliveries. In the shot below, the opposition players are focused on the ball, and the 20-year-old plays a lob ball over the midfield.

His passing ability is what differentiates him from the rest of the centre-backs in the league. His vision and execution have proven to be a success for Talleres this season.

Apart from playing passes out of the back, Medina is also good at progressing the ball through his runs. When he sees an opening, he pushes up to the final third to pick a teammate with a through-ball. You can see one of these moments in the image below, where Medina sees opposing midfielder getting closer to his teammate and uses this movement as the opportunity to run through the midfield and play the through ball to one of the attackers. He sometimes pushes upfield and plays the role of a playmaker, quite similar to what Virgil Van Dijk does occasionally at Liverpool. When his teammates are not open, Medina can get the ball to the final third himself and then distribute the ball from there.

His build and pace, plus great ball control for a centre-back, make him, in my opinion, a unique defender for Argentina. The defender that can handle the ball well can make the build-up process itself much easier and also adds some variety and unpredictability.

In the next few paragraphs, I will show some charts containing all the centre-backs in the Superliga. In the first one, I sorted them by through and progressive passes played per 90 minutes. Medina is one of the five statistically best centre-backs in these two categories, and he proves that on the pitch with his passes. 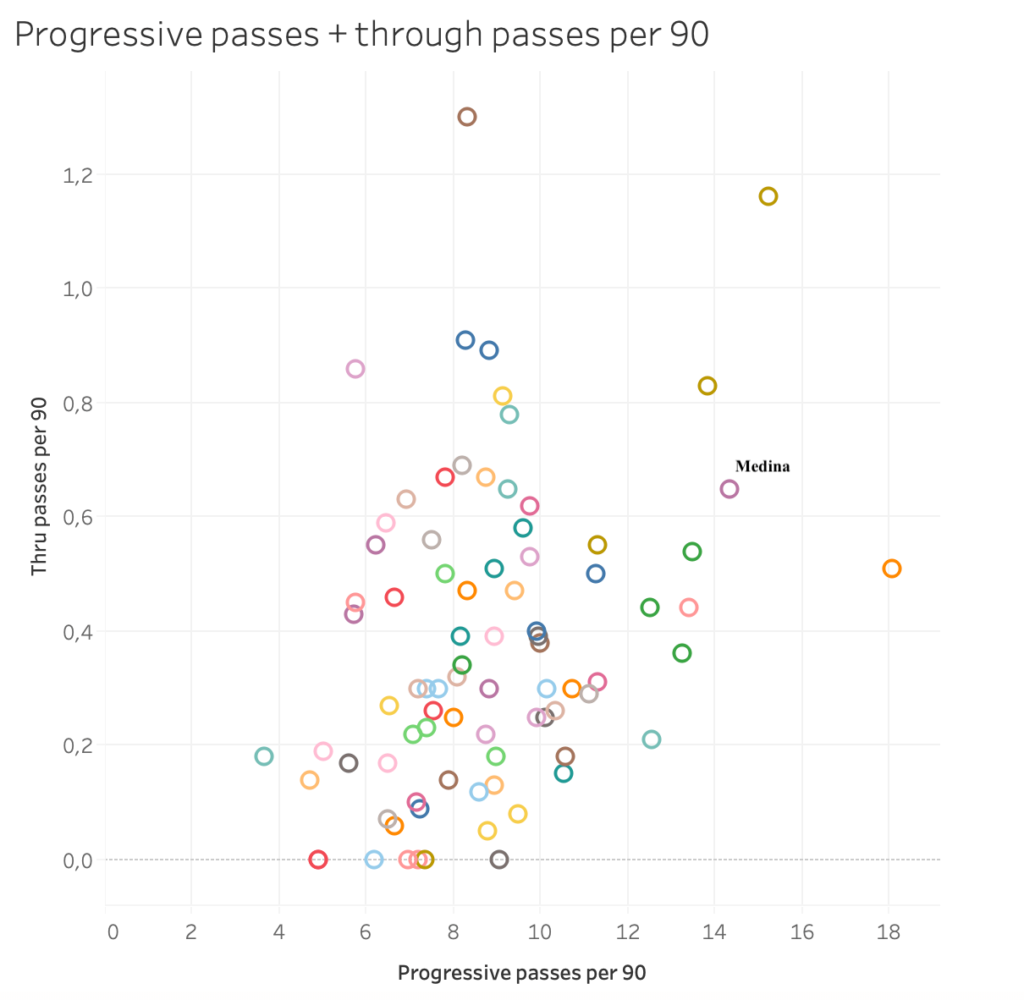 In terms of comparing Medina to other centre-backs in Superliga with the help of long passes and progressive runs, he is better than the majority, but behind many players with higher output in these categories. 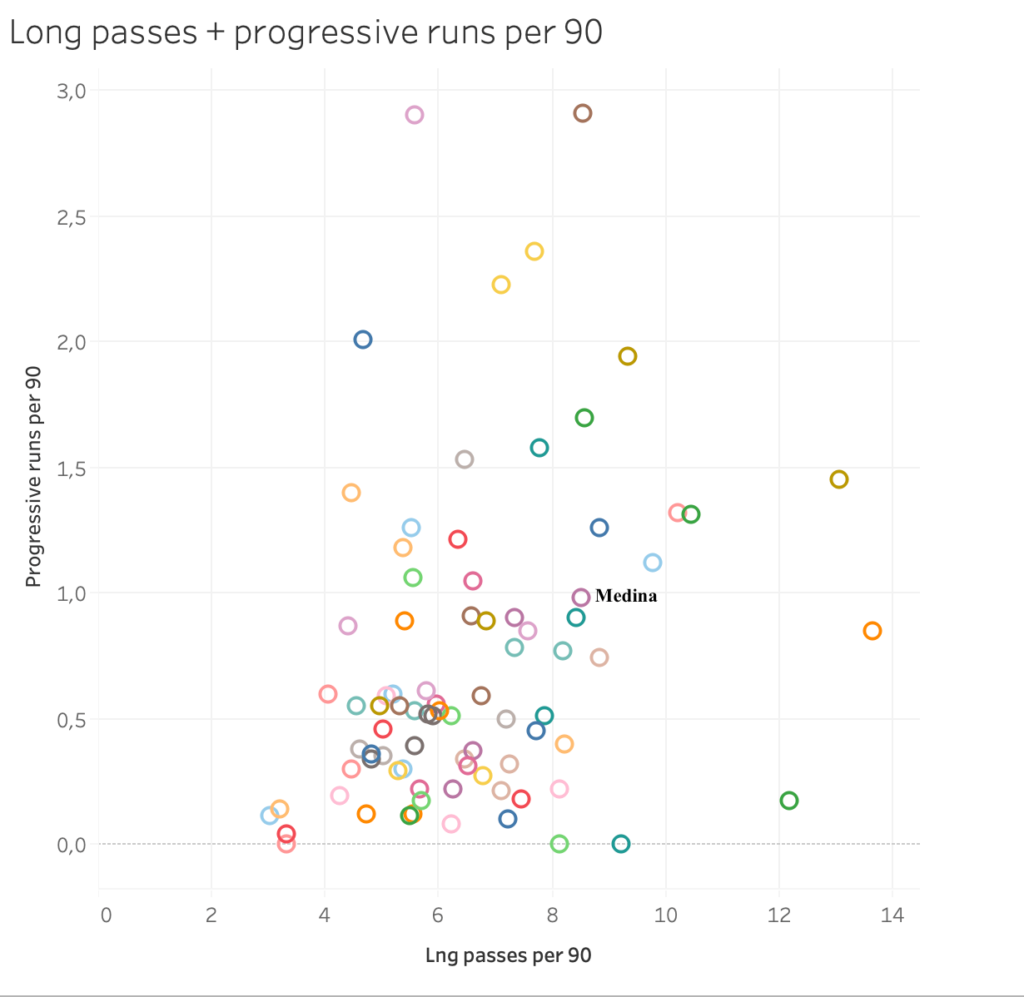 Medina showing off his best qualities in Superliga this past season already attracts the interest from clubs in Europe, and I believe he is ready to play on a big stage, with Serie A and Ligue 1 being good choices to pick from. The next club needs to guarantee him regular playing time, where he will get the experience of playing in the top league. He is one of the most promising Argentinian centre-backs right now, and the right choice of the next club could put him on the radar for the rest of the football world.