Orientations of the block

Fonseca is a pragmatic coach, so, unlike many coaches, he does not always commit to one single defensive style and tactics. Roma’s urgency when out of possession is dependant on a multitude of factors, such as the scoreline and the opponent. For example, in the first leg of the Europa League round of 16 against Gent, Roma had a PPDA (opposition passes allowed per defensive action) of 23.74 (an extremely passive press), while in their next match against Lecce their PPDA was 9.32 (a much more aggressive press).

When Roma are not pressing, they set up in a narrow, vertically and horizontally compact mid block. The block is zonally oriented and blocks central space and passing angles. The block is either in a 4-2-3-1 or a 4-4-2 shape. Regardless of shape, the principles remain the same.

The 4-2-3-1 block keeps the players in their starting positions. In the image shown below, we can see Roma in a 4-2-3-1 block. The shape is very narrow, with the far-side winger still in a relatively central position. The furthest player away from the ball is the far-side fullback, who has stayed relatively wide in this case so as to defend a potential switch. The shape is also very vertically compact, with the double pivot bridging the gap between the back four and the attacking midfield three. We can see that the opposing team have no open passing angles into the centre.

Roma, like many teams who start with a 4-2-3-1, create a 4-4-2 when defending as the wingers and double pivot will create the midfield four, while the attacking midfielder will join the striker in the front two. This shape performs very similarly to the 4-2-3-1 shape, and Roma will often oscillate between the two throughout a match. 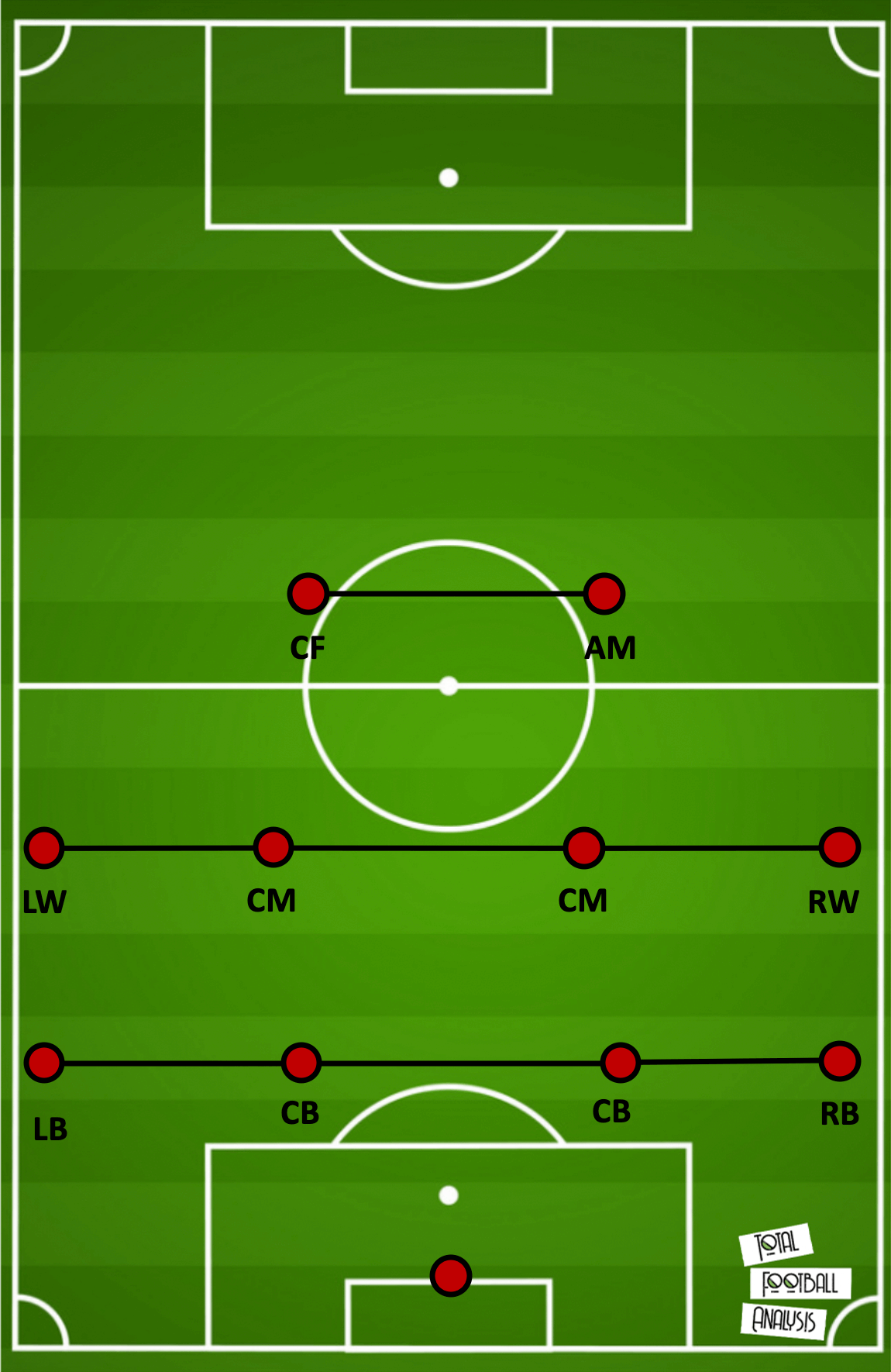 In the image shown below, we can see an in-game example of this 4-4-2. The midfield four is created by the wingers and double pivot, while the attacking midfielder and centre forward create the front two.

Once again we can see the same principles in action, this time in the 4-4-2 shape. The block is compact horizontally and vertically, the space into the centre of the pitch is being blocked off intelligently, and we can see the zonal structure as well. 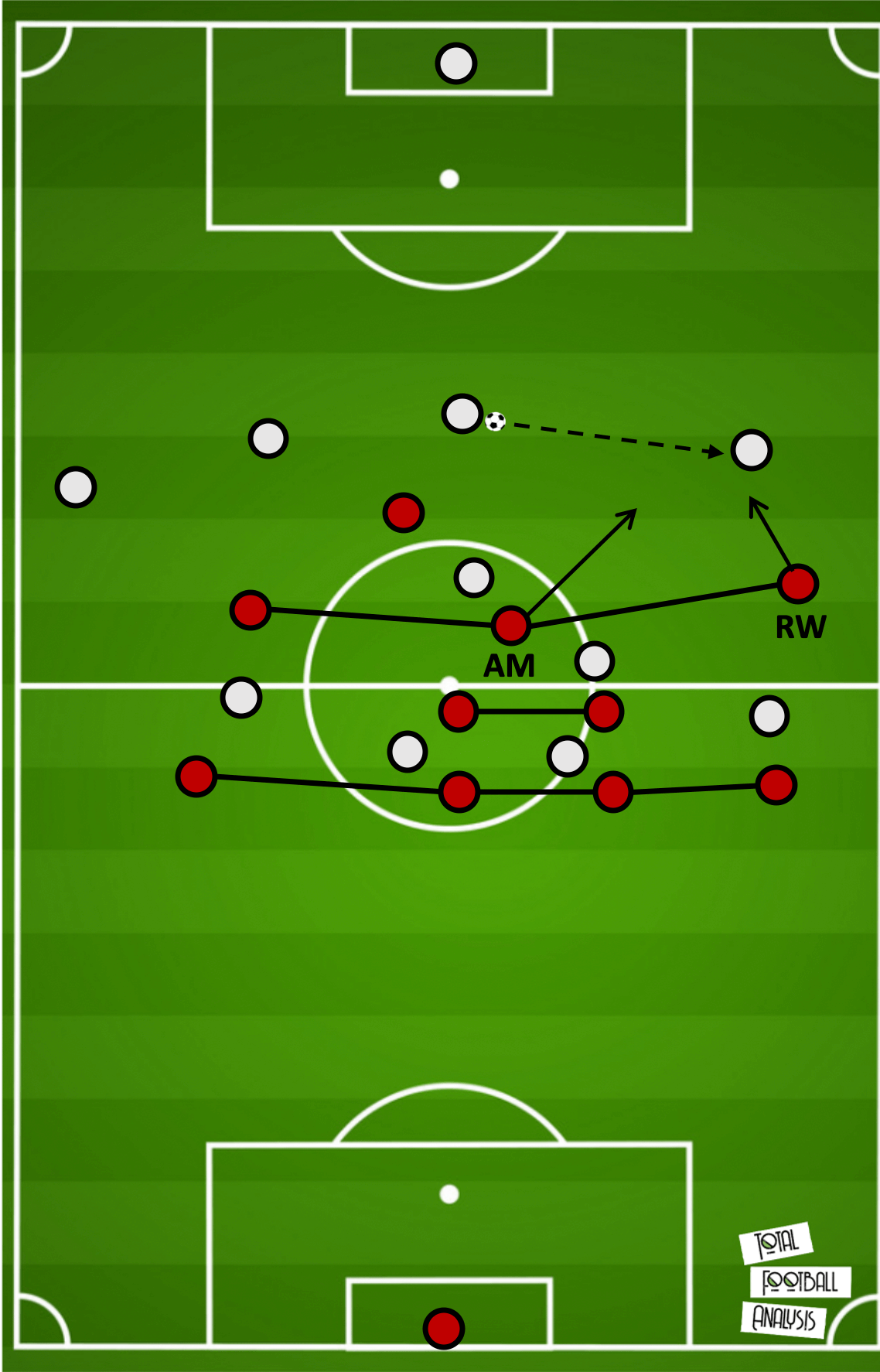 Below, we can see an example of this. Roma were in their 4-2-3-1 shape, and the attacking midfielder stepped out as the ball was in motion after a pass from a centre back to the fullback. Then, the winger has already jumped out to apply pressure as the ball reaches the fullback.

In some cases, Roma’s opponent’s will not use the wide areas to progress the ball in build-up (particularly when playing against a back three build-up scheme). In such a scenario, Roma will use a different pressing scheme. The centre forward will apply pressure to the ball-carrying centre back, while the attacking midfielder will step out to press the receiving centre back as the pass is played. 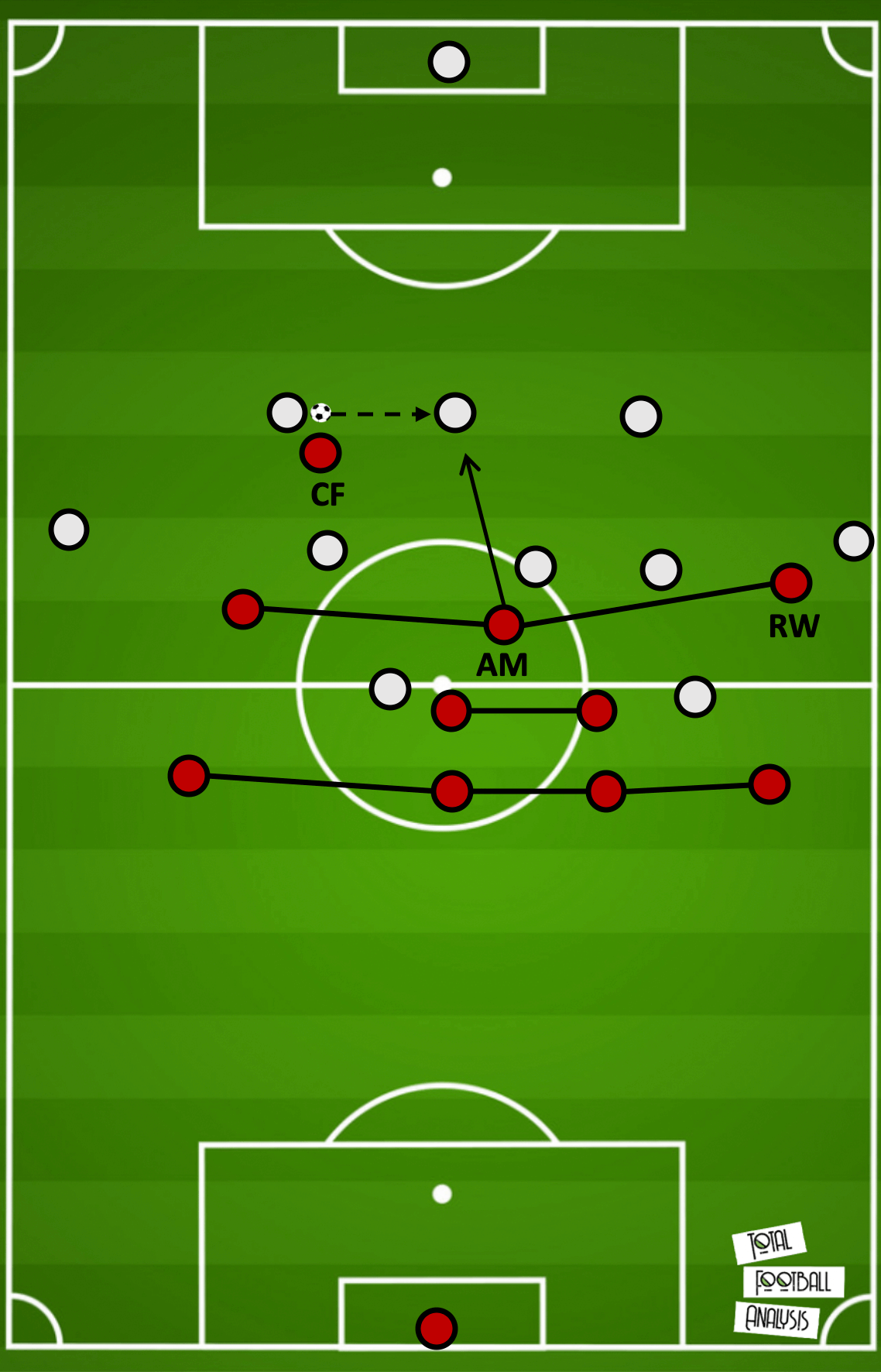 We can see an example of this particular pressing trigger in the image shown below, the centre forward presses the ball-carrier, forcing a pass to another centre back. As the pass is played, the attacking midfielder jumps out to press and meet the receiver as the ball arrives.

Roma’s offensive and defensive shapes are drastically different, so it is dangerous when Roma lose the ball, as an opposition counter-attack can catch many Roma players out of position. To combat this dangerous possibility, Roma will counterpress intensely when possession is lost and there is a threat of a counter, the players nearby the opponent’s ball-winner will collapse on him from all directions. Roma’s offensive shape lends itself to counterpressing, as there are usually players within close proximity of the ball in each direction.  In the example shown below, the surrounding Roma players collapse upon the ball as it is lost.

Roma’s counterpressing does not always regain the ball, and one of their biggest weaknesses is being exposed in transition if they cannot recover the ball in time. The heavy rotation coupled with committing all surrounding players to compressing leaves many players out of position. In the example shown below (in the same transition as the previous image shown above), Roma’s opponents have played out of the counterpress, taking out seven players and leaving just three players ahead of the ball to fend for themselves in transition. 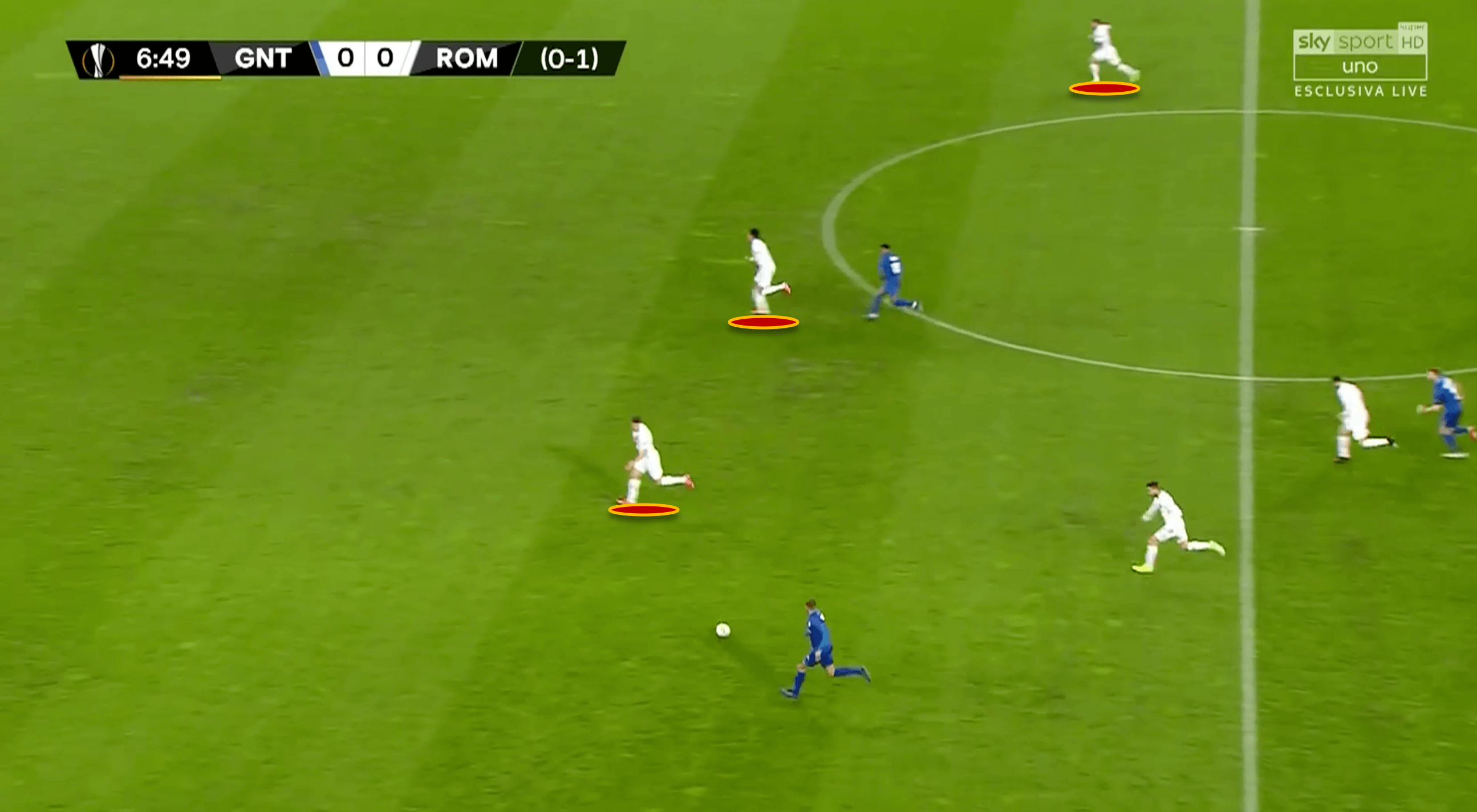 It would not be surprising to see if Roma under Fonseca evolve quite drastically from their current tactical system. It is quite clear to see that Fonseca’s hand has been forced in some aspects due to personnel. For example, Roma’s two strikers (Nikola Kalinić and Edin Džeko) are both similar in profile. In attack, they both prefer to be utilised as a focal point rather than contributing much to build-up.

They are both past their prime and lack the athleticism and stamina to press as much as their teammates. As such, Fonseca is forced to work around these issues. To combat this, he has used attacking midfielder Nicolò Zaniolo as a centre forward at times. Using the talented attacking midfielder out of his natural position is not ideal, and leads to further shortcomings in other areas.

In defence there are similar shortcomings, there is a lack of depth to cover at right-back, with left-back Leonardo Spinazzola featuring in that position at times. Since Alessandro Florenzi’s departure on loan to Valencia in January, Roma have struggled to cover that position, with neither Bruno Peres nor Davide Santon nailing down their position as a starter this season.

Although many of these depth issues have been caused by injuries, Roma will have to look to the transfer market regardless. Though finding enough players to cover the lack of depth who also have the quality needed to compete for a first team position will be expensive, unless Roma can unearth some hidden gems, which they have done in the past. For example, Zaniolo was purchased for less than 5 million Euros, while Džeko, who has been a consistent goalscorer for the club, cost Roma just over 10 million in 2016. It might be necessary for Roma to find cheaper players of the right quality, as Roma cannot currently attract the world’s best.

Over the last two parts of this tactical analysis, we have examined Roma in all their phases. Roma are not a very tactically complex team. However, they are adept at fashioning chances using rotations and the quality of players in offense, while their defensive structure is compact and hard to break down. Despite their shortcomings, Roma under Fonseca are a perfect example of a solid team with a good coach who has built a sound tactical machine in the Italian capital.