After an incredibly successful last two seasons, which have seen him soar from Segunda Division to Europa League football, it was no surprise to see Rubi topping the lists of several headhunters this summer. Real Betis were the fortunate side to poach the coach, taking him from Espanyol.

His philosophy, similar in many ways to that of Quique Setien, who he replaces, will be considered in this tactical analysis. For many, Betis will be seen as a step up for Rubi, despite leaving a club in Europe for one who finished below his team last season. It is certainly the biggest challenge he has faced to date, but it is one that he seems well prepared for.

Rubi has developed a reputation for his flexibility in tactical approaches and formations. His clear favourite though is a 4-3-3. Setting up with a rigid bank of four is a particularly essential element of his philosophy. The set-up in front of that line can change, but the back four is essential to the defensive strategy of Rubi. With a rigid line, typically protected by a holding midfielder, the two other midfielders have more freedom to move forwards and support the attack.

In the front line, there is significant variation. At times, the front line is built up of a central striker and two wingers, though at others there are more central strikers to support the main man in attack. This variety is a key aspect of Rubi’s philosophy, frequently looking to make changes and leave opposition baffled by the change in approach to unsettle their organisation.

“As a coach, you have to know how to mix things up,” is one of the lines from Rubi which has most excited Real Betis fans this summer. When making changes, the most frequent options to mix up are with 4-4-2 or 4-1-4-1, adding further defensive solidity against more robust attacking outfits.

Early signs in pre-season suggest that he will stick with one of these shapes, as he explained that he wishes to stay loyal to a four-man defence. “It’s not definite, but we think it could work, we’ve analysed Betis and think it could work out well,” he told journalists after a week of training with his new squad. That is in spite of the fact that Betis under Setien would always line up with a three-man back line.

What was perhaps the most surprising switch at the time, and intriguing now, was when Rubi switched to a 3-5-2 against Real Betis in late April. The approach was not one that Rubi reverted to often, but did do so when faced with such a shape. Having had experience of using such a set-up could be a useful tool to have given that it is a system which the squad of players he will be working with are well accustomed to.

Bringing the ball out from the back

Rubi’s approach and Setien’s also bears similarities in their focus on possession play. However, it is a different approach. Whilst Setien was 100% committed to the short passing arrangement, Rubi is not as extreme. Possession is a key element of his game plan, but it is not an essential aspect and when his teams go chasing a result late on in games or need to change their approach, they are often able to do so without any problem.

That said, at 14.4 passes per minute, only five La Liga teams beat Espanyol for the frequency of their passing last season, one of them being Real Betis. It was a significant change from Quique Sanchez Flores’ reign where direct football ruled, yet Rubi got the squad playing a very different style with few personnel changes. By getting the best out of players like Esteban Granero, he pulled the team up to the next level. At Betis, his squad will already be experts at such an approach and it will be key to his tenure to see whether Rubi sticks to his guns and maintains flexibility and the possibility of going more direct, or if he adapts to a squad accustomed to more possession by encouraging this. 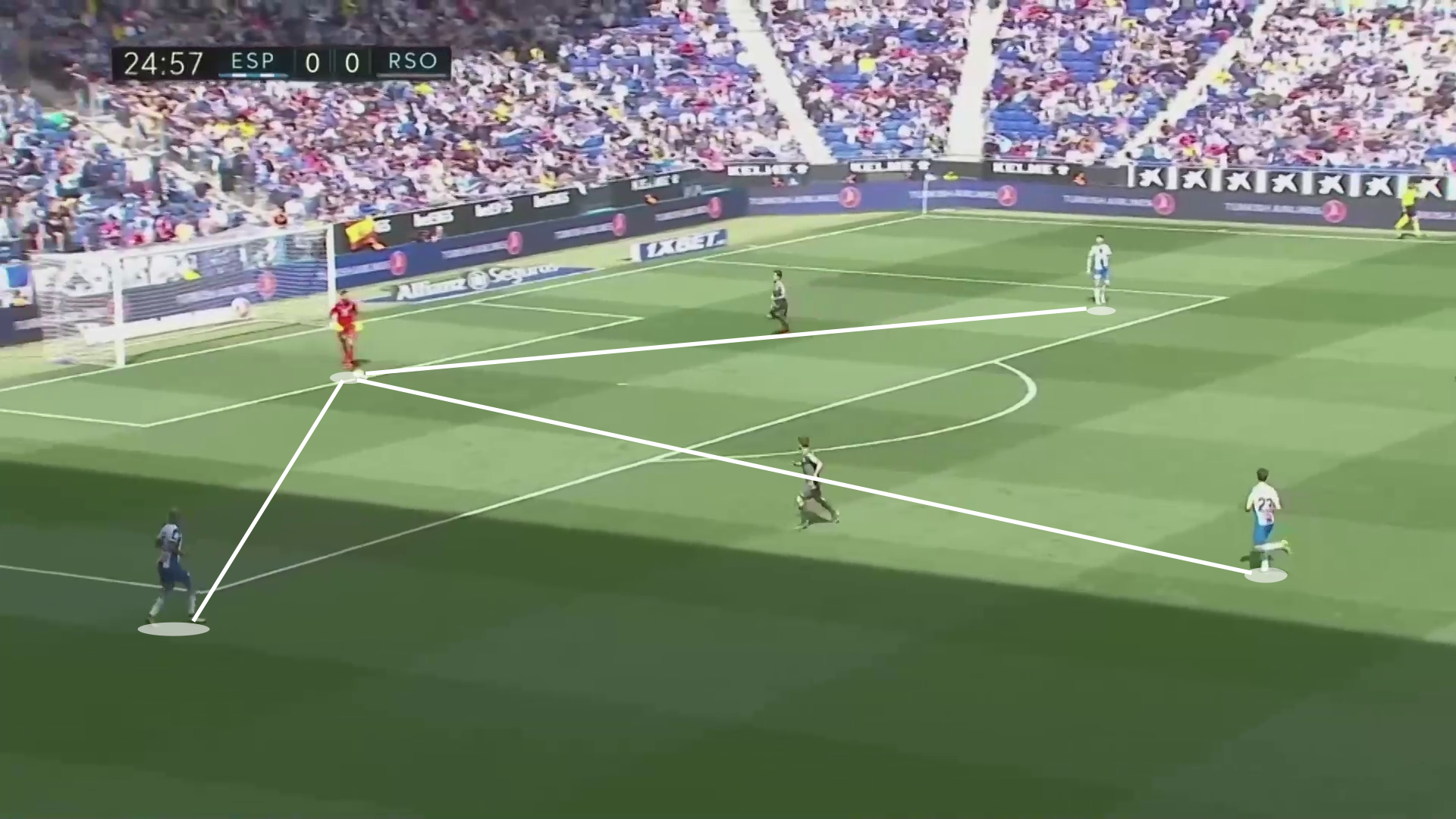 Much like Setien, the style is built around passing out from the back. At times, Espanyol fans expressed their frustration with this approach just as Betis fans did with Setien. Rubi stuck with it and it continued to get results, building play gradually and inviting the press, pulling players out of position to create space higher up the pitch. His approach is not revolutionary here, with the typical three man range of options in defence, but it is effective.

Rubi’s teams are well organised when it comes to the press, but perhaps not as may be expected. Betis last season pressed high, right from the off, whereas Rubi’s Espanyol preferred a deeper press. Instead, they would wait until the ball entered the middle third before engaging, but once it did so they would press in numbers in an organised set-up.

From the last 10 games of the season, Espanyol made more interceptions than their rivals in eight of them. Such reading of the game and movement forward is key to allowing Espanyol to never be put onto the back foot, breaking up counter attacks before they even begin.

This element of his philosophy could be beneficial for several players at Betis, allowing ageing stars like Andres Guardado and Joaquin Sanchez to press in a deeper position rather than pressing high up the field. By reducing the ground covered, energy can be reserved for a more intense press in the middle of the pitch. It represents a way in which Rubi could manage his squad without a need to invest heavily this summer.

One of Rubi’s first moves since arriving in Seville was the signing of Borja Iglesias. His lead striker at Espanyol last season, the duo will be reunited with his new club prepared to put faith in their coach and back him up with the striker that he wanted to rise to the challenge of becoming the talisman in attack.

Should Rubi look to deploy Iglesias in the same way in Seville as he did in Barcelona, it will provide the forward with flexibility. Rather than being on the shoulder of the last man, as the likes of Jese and Loren Moron were for Betis last season, he instead drops deeper and wider to find spaces and pick up the ball. Intriguingly, this does mean that he often works better in a partnership, rather than on his own or as an isolated centre-forward in a front three. What impact that may have on the set-up at the Benito Villamarin could be interesting to follow.

He is also particularly threatening on the counter. By making his run by drifting wide, he stretches the defence even further and can exploit the space. Then, he either cuts inside and shoots himself or has shown that he is unselfish and more than happy to see other players who have gone to the far post finish off the chance.

Coming into a side with established wide players and plenty of attacking playmakers, Iglesias may have to adapt his game to the players around him and find a new way to thrive. Balancing this with adapting one of his biggest talents from last season and getting a similar goal return from him will be a crucial factor in determining how successful Rubi is in his debut season at Betis.

Rubi seems a match made in heaven for Real Betis. Sticking to the same kind of approach and capitalising on the same qualities of his players, primarily fast movement and good passing. However, he is just that slight amount more flexible and more adaptable, which will appease the fans who grew frustrated by Setien’s refusal to divert form his philosophy last season.

After two successful campaigns with Huesca, earning promotion, and Espanyol, taking them to Europe, he will now inherit the squad of highest quality yet. The potential for Rubi to perform well in Seville is huge and he will hope to benefit from the patience afforded to Setien before him.