Following an impressive first half to the season, Real Betis sat just four points off a Champions League spot in February. Since then, their fortunes have taken a significant turn for the worse and they now find themselves in 11th place.

Betis’ opponents on Monday night, Espanyol, went into this game level on points with their hosts, albeit with a marginally superior goal difference. At the beginning of November, Rubi’s side were second in La Liga behind Barcelona.

With both teams’ campaigns crawling over the line in disappointing fashion, this game was unlikely to spark either into a late surge for the European spots. This analysis will attempt to understand why neither side managed to take all three points.

Without pivotal midfielder William Carvalho to call upon, Quique Setién elected to partner Andrés Guardado with Wilfrid Kaptoum in the middle of the park. The fluid trio of Sergio Canales, Jesé Rodríguez and Giovani Lo Celso led the attack. Former Borussia Dortmund defender Marc Bartra played on the left to provide ball carrying potential down that flank, with Zouhair Feddal occupying the centre of Betis’ back three. 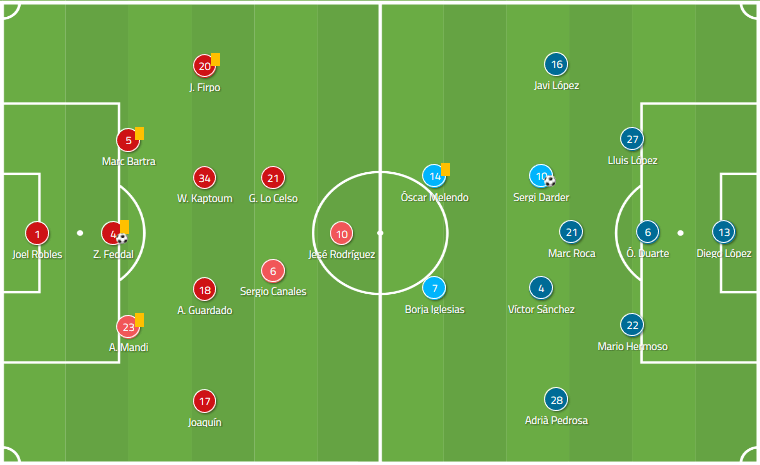 Rubi set his team up in a compact 5-3-2 without the ball, with the wing-backs Javi López and Adrià Pedrosa pushing further up-field during established attacks. Óscar Melendo joined Borja Iglesias up front but had a free role to drop off and link the midfield and attack. Talented young midfielder Marc Roca was the chief distributor at the heart of the Espanyol side.

From the beginning of this encounter, both teams implemented a controlled approach to pressing. Betis were dominant in the early stages, with Espanyol looking to guide them down the sides before closing out space against the touchline.

They also pressed aggressively in response to triggers. Backwards passing and loose touches acted as cues for the away sides’ attackers to apply hard pressure to the Betis defenders. The home team, meanwhile, adopted similar methods, closing off the potential for their opponents to progress possession centrally.

The image below shows Espanyol applying light pressure to the Betis back-line, ushering their play towards the flanks. Central passing options are shut off, while the switch of play is made difficult by the positioning of Melendo at right forward.

Bartra passes to Junior Firpo on the left wing, only for the 22-year-old to be pressed tightly by his opposite number, Javi López. 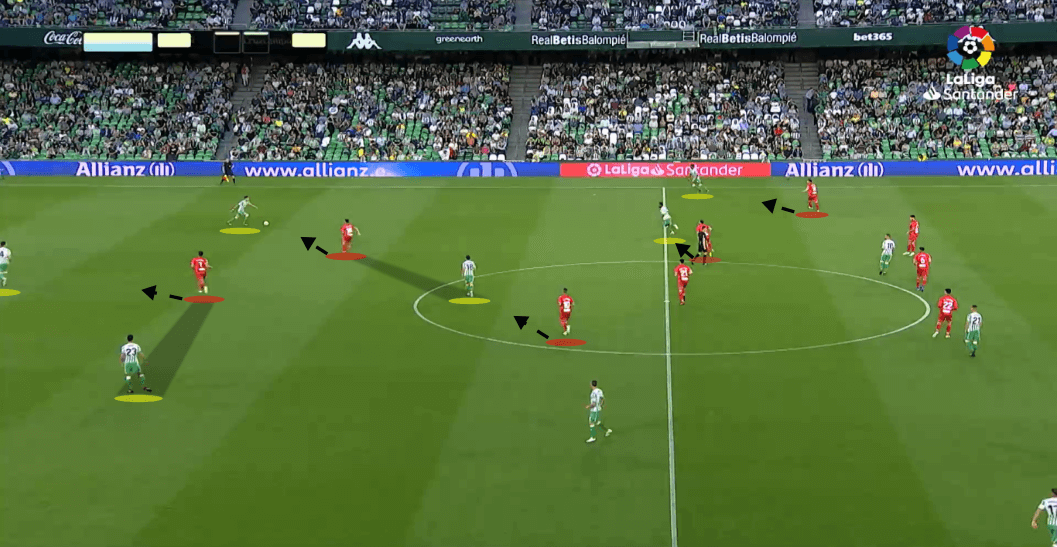 No opportunity exists for Betis to progress the play further down the left, forcing them to return the ball back to Joel Robles in goal. This backwards possession entices Espanyol to press high in the hopes of forcing a long ball or a misplaced pass. On this occasion, Robles passes to Bartra, who clears the ball up-field before his opponent can dispossess him. 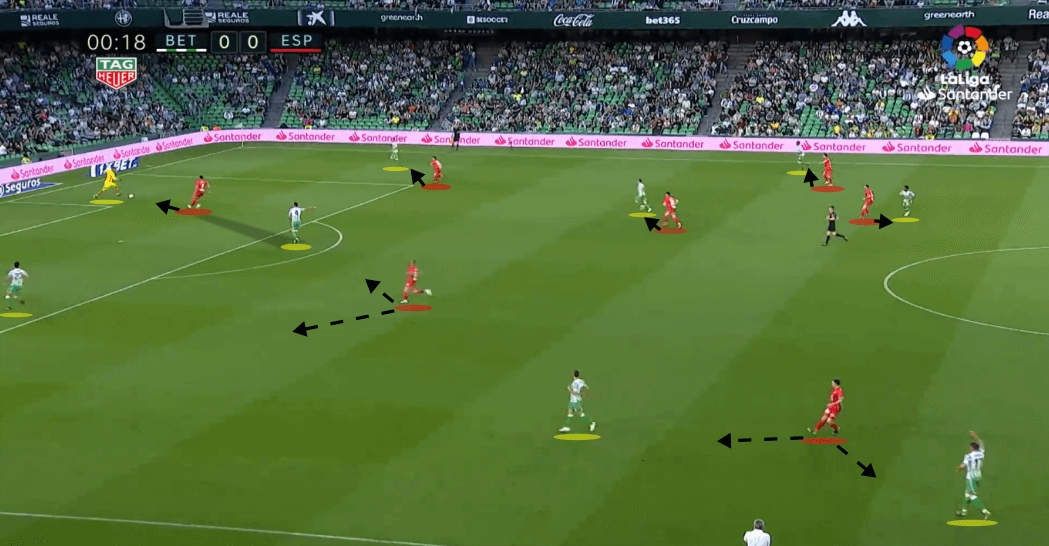 As mentioned, Betis also applied pressure in a controlled manner. Central spaces were closed in an attempt to force the visitors into less dangerous areas out wide. Once this was achieved, the near-sided wing-back would push up to pressurise the ball-occupant, with the midfielders assisting him in forcing a turnover. 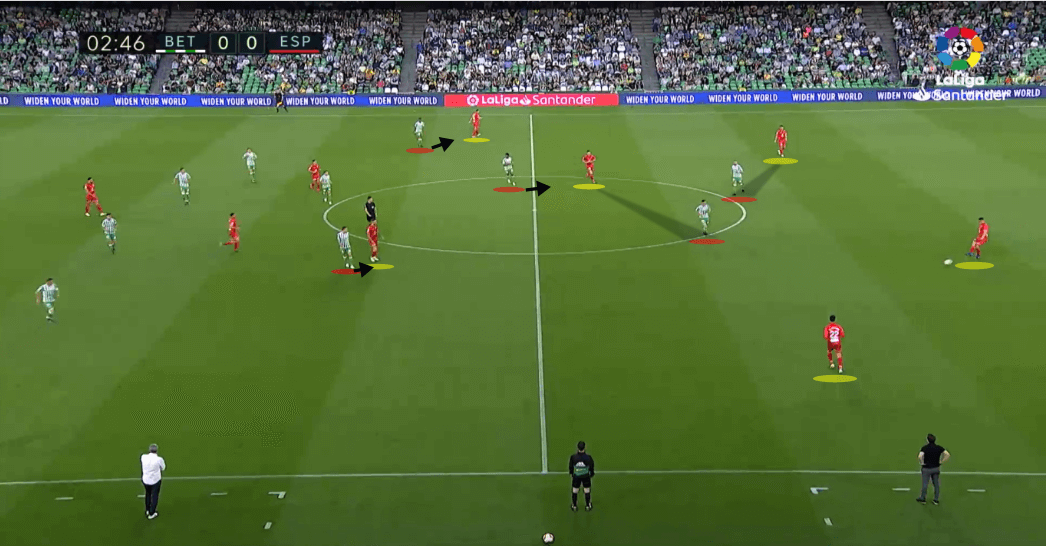 If Espanyol decided to try and penetrate the congested middle, Betis would press in numbers and with intensity to recover possession. The image below illustrates this, with Lo Celso, Jesé, and Canales closing in on the space surrounding the ball while cutting off any short-passing options. 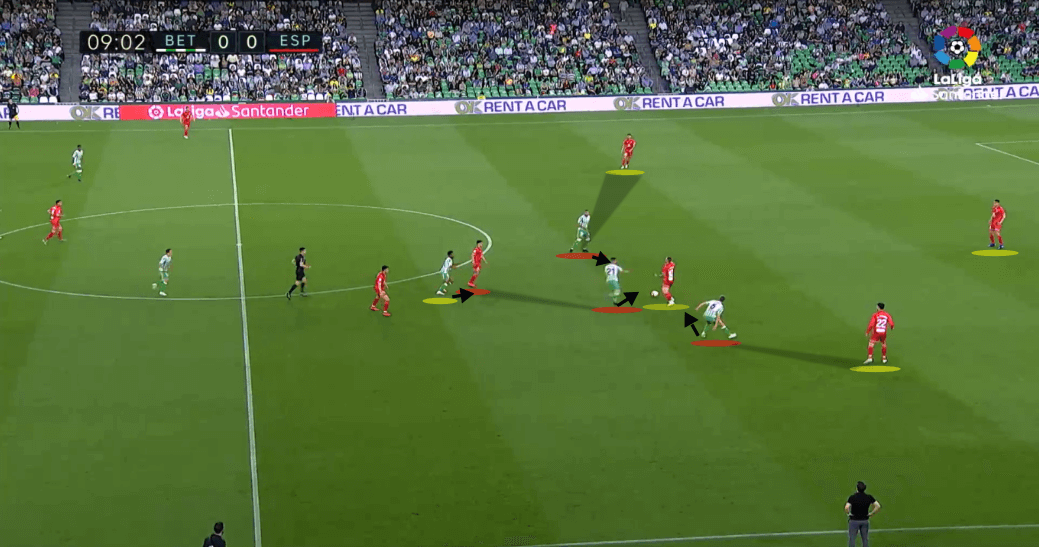 For Betis, pressing didn’t reap any great rewards. Espanyol, on the other hand, scored the games’ first goal after forcing an error during the home team’s build-up.

In the image below, Canales has possession after receiving a lofted pass from the keeper. Espanyol force him backwards before blocking off any passing lanes. This leads to a failed attempt at an out-ball to the far-side, allowing the away team to take the lead through Sergi Darder. 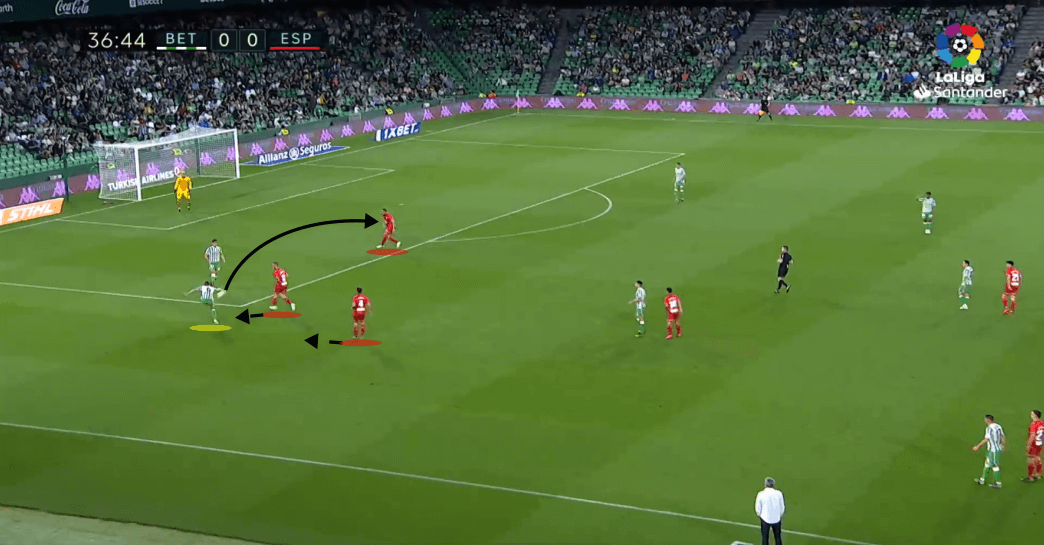 Overall, Espanyol’s pressing proved far more productive, while Betis failed to create any significant openings through the same means. RCD were only permitted 7.61 passes before a defensive action arrived, but most of the time a long ball into the channels was the end result.

Conversely, Betis were allowed an average of 14.75 passes before being dispossessed. However, their opponents chose their moments to press excellently.

Along with their application of pressure in vulnerable moments, Espanyol also managed to nullify Betis’ preferred attacking methods by defending deep and compactly. Their defensive line of five made it difficult for their opposition to switch the play out to the wing-backs. While the narrow midfield three were effective in closing out space in front of the defence, making it tough for Lo Celso and Canales to work their magic.

When the opposition are defending deep, Betis will usually look to shift possession from side to side, waiting for a gap to appear centrally to play through. In the event that no gaps appear, they look to progress down the sides before feeding the ten space via the wing-back or combining to create a crossing opportunity.

Espanyol, however, rarely allowed space to open up down the sides and their midfielders were quick to get across to the ball near side to support their wing-back. In the image below, Betis have explored the possibility of penetrating down the right flank. With the space congested, Canales returns possession to Mandi. 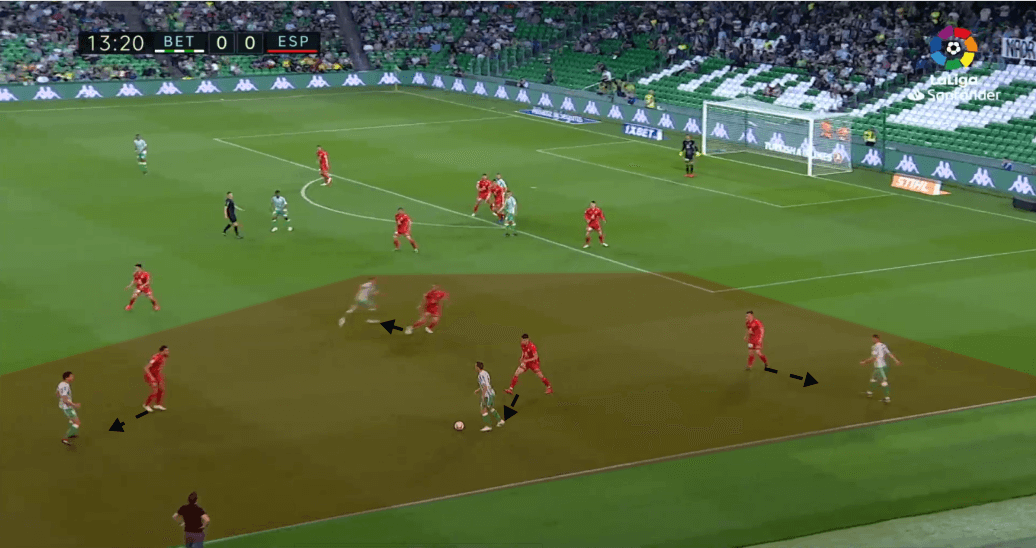 A significant part of Betis’ game is to switch the play in these kinds of scenarios, finding the far-sided wingback in space. As shown by the image below, this option wasn’t usually available to them on Monday night.

The Espanyol defensive block shifts across quickly as a unit. Furthermore, their back five gives them sufficient coverage of the pitch horizontally, making Betis’ tried and trusted switch of play less of an option. 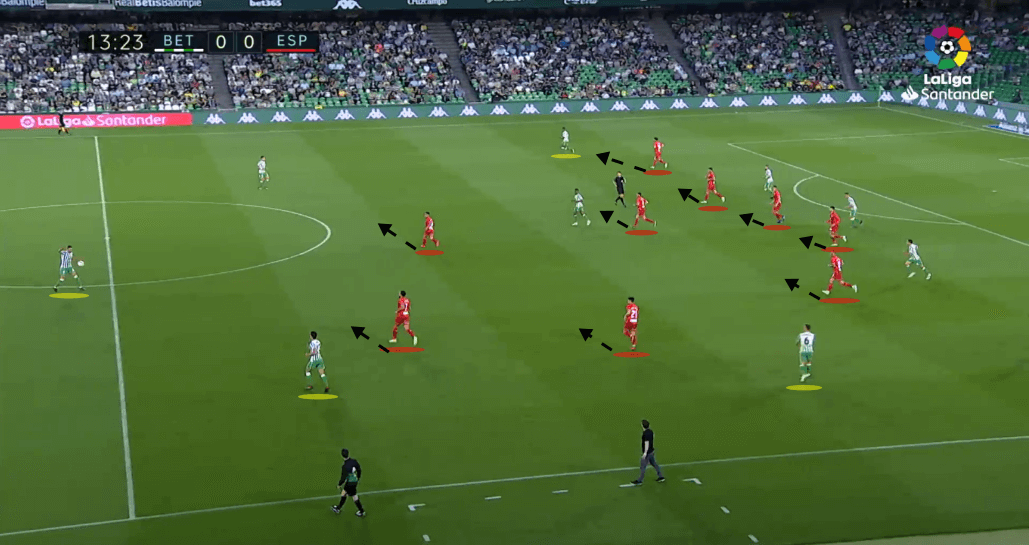 Betis also regularly looked to find passing lanes into Lo Celso and Canales between the opponent’s defensive and midfield lines. Espanyol’s well-executed cover shadows made this extremely difficult to achieve.

In the first image below, Mandi passes out wide to Joaquín with the passing lane to Lo Celso closed off by a cover shadow. 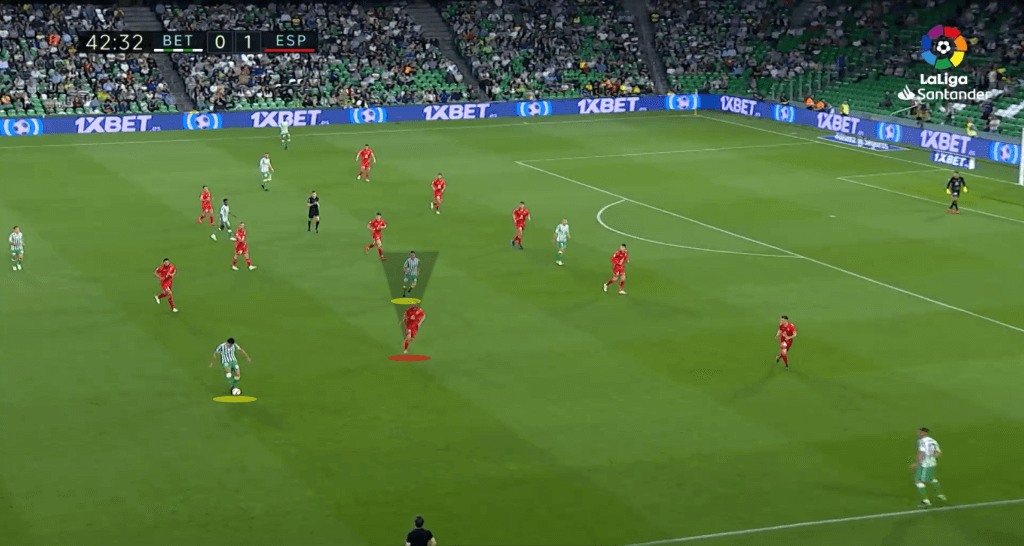 Normally, the wing-back would then make the pass into Lo Celso in the half-spaces. However, the opposing midfielder continues to scan behind him and maintain an excellent cover shadow, preventing passes into the Argentinian and frustrating Betis in the process. 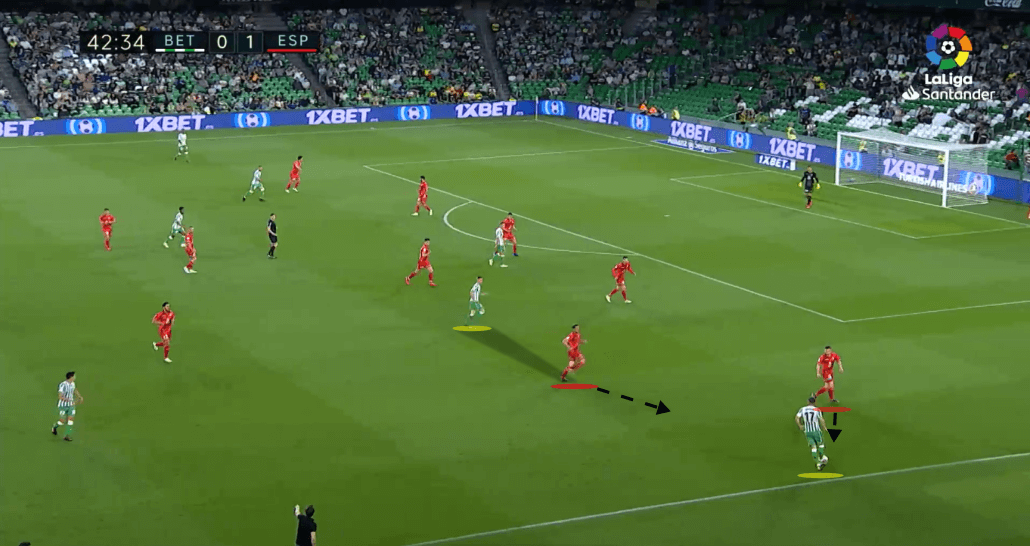 Given their limited options for progression, Betis sometimes resorted to long balls over the top and into the channels.

As is often the case with Setién’s teams, the conditions set prior to taking the aerial route to goal were set prior to the ball being played. As shown by the image below, Joaquín has drawn his opposite number wide on the right, while Betis have overloaded the left. Finally, Lo Celso has engaged the central defender in the back five, Mario Hermoso.

These mechanisms create the opportunity to play a lofted pass over the top and in behind Espanyol’s left centre-back, who now has little covering support. On this occasion, as well as for most of these attempts throughout the first half, Lluís López overcomes the challenge and wins the first ball. 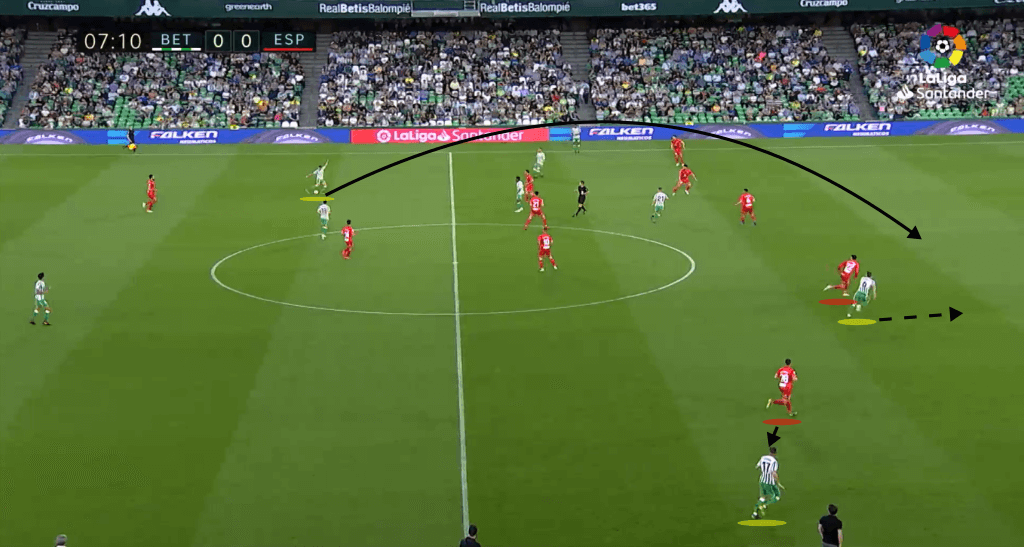 Overall, Betis struggled to create many quality chances in the opening 45 minutes. Espanyol were wise to their attacking methodology and had prepared strategies to nullify them.

Over the course of the full game, Setién’s side managed to register 17 shots on goal. However, only five found the target, and they finished with an expected goals tally of just 1.41. Espanyol, meanwhile, took nine shots with just four testing Robles. Their xG for the match finished up at 1.43.

Setién tinkers in search of an equaliser

As the clocked ticked down and the prospect of a fourth consecutive defeat loomed, Betis pushed more men forward in their attempts to equalise. Setién switched to a four at the back, with Mandi operating on the right and Firpo on the left. Cristian Tello entered the fray in place of the injured Canales, while Loren Morón later came on for Jesé up front. In the final stages, Diego Lainez was also brought on for Mandi as a last throw of the dice. For the majority of the second half, Betis lined up in a 4-2-3-1 shape.

With Firpo and Mandi pushing forward as fullbacks, the change in formation left the home side vulnerable on the break. The back two were exposed, and large spaces opened up in the channels. In the image below, Espanyol cut through their opponents before feeding Roca down the left. The Spanish youngster’s shot was tipped narrowly wide by Robles. 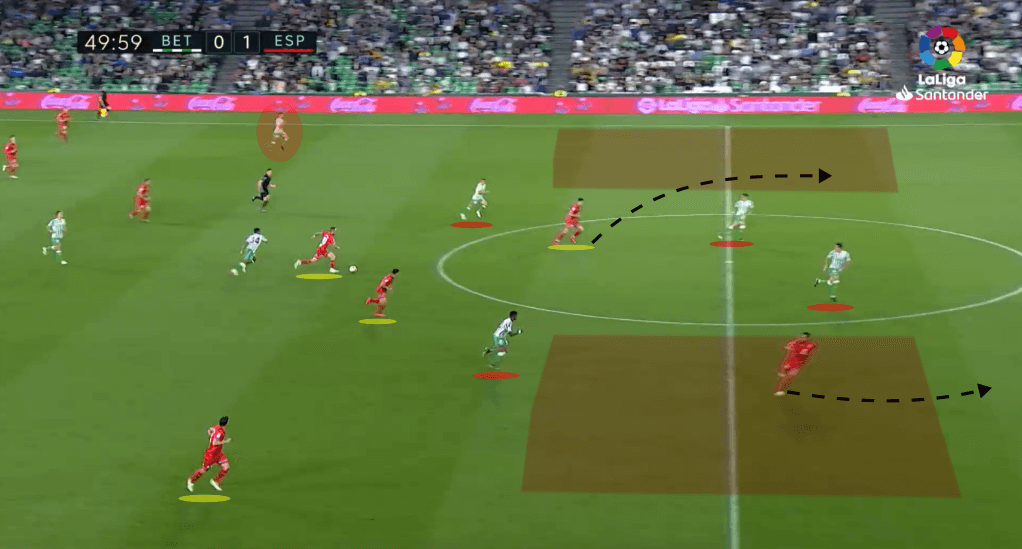 Betis started to settle into their new shape as the half went on, gradually finding more space down the sides with the Espanyol defence forced narrow by the sheer volume of green and white shirts.

Shifting the ball from one flank to the other across the edge of the penalty area, Betis managed to free up Joaquín and Firpo for low crossing opportunities. In the image below, the former delivers a dangerous ball across the face of goal, while the latter makes a late run into the box. Espanyol have all but one man back, with Betis committing every outfield player aside from Bartra and Guardado.

Notice also the positioning of Mandi as he passes to Joaquín. The Algerian defender usually made underlapping runs into the centre as opposed to overlaps, with Joaquín able to provide more natural width. 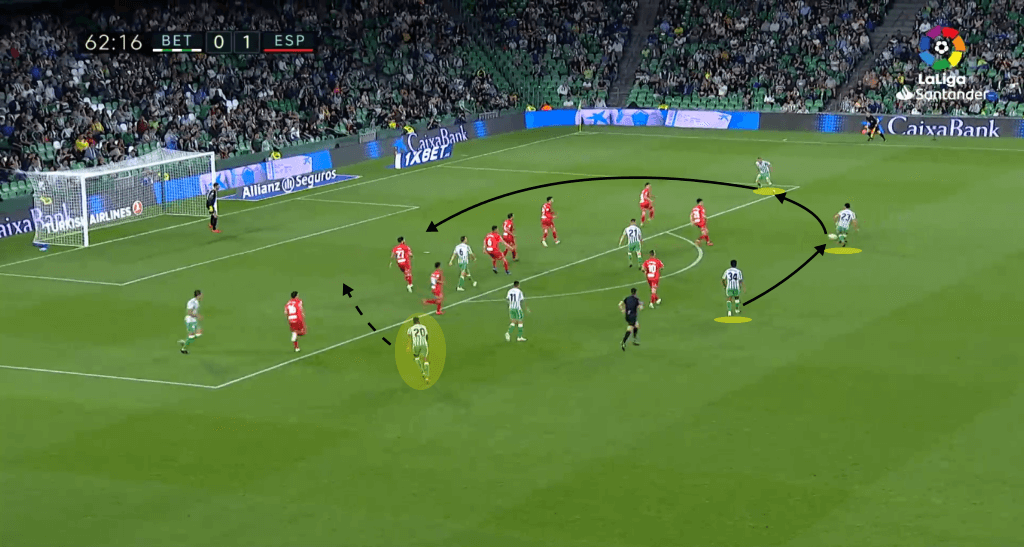 Zouhair Feddal was sent forward as a spare man at different stages of the second half, and it proved a decisive move. With just three minutes of added time remaining, an intelligent piece of play by Guardado created just enough space for Lo Celso to provide a cross to the back post where Feddal could power home.

In the first image below, we see Guardado carrying the ball forward on the right-hand side. He feeds Joaquín on the touchline, before continuing his forward run. 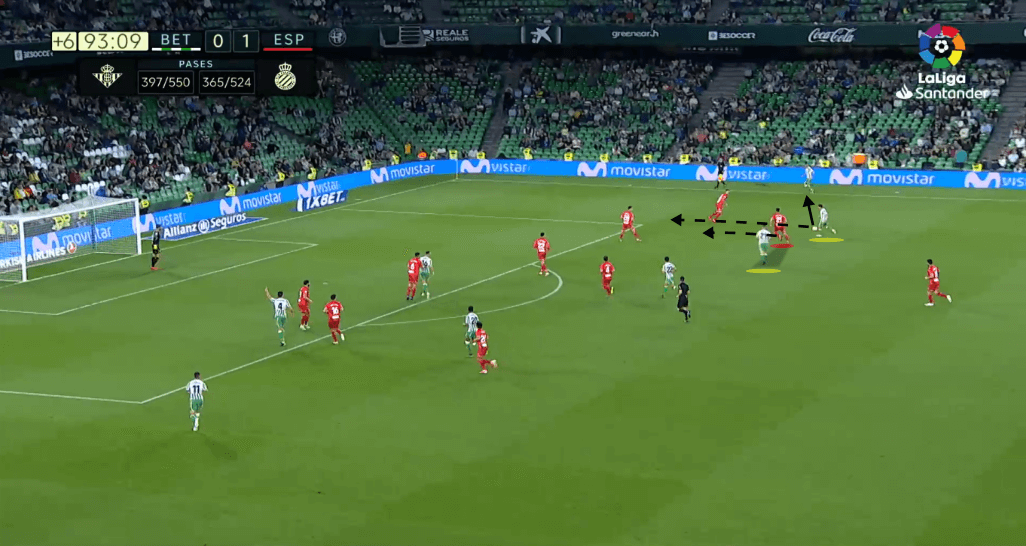 This takes Melendo with him, opening up the passing lane towards Lo Celso in the right half-space. The playmaker has space for a split second to receive and turn, before delivering a pin-point cross to Feddal at the far post. The centre-back smashes in the equaliser from close range. 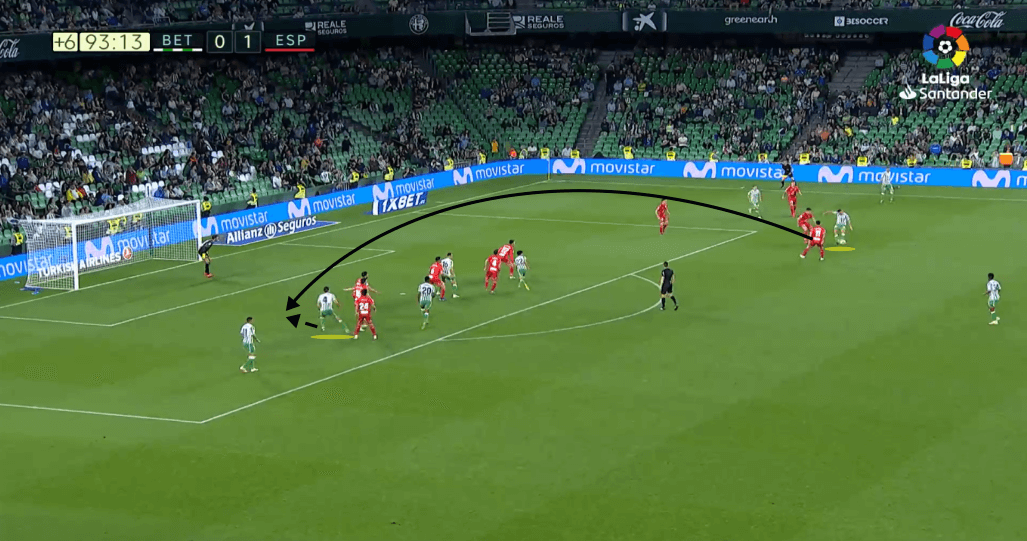 All in all, a point for both sides was a fair reflection of the game. Betis eventually managed to create an opening after a sequence of adjustments from Setién.

Despite having less possession and fewer shots on goal, Espanyol may feel disappointed with the draw. Given how long they managed to keep their hosts at bay, and the opportunities they had to secure a win, Rubi may see it as two points lost rather than a point gained.

Thanks to a solid defensive display, Espanyol were able to limit their rivals to few quality chances. The away side’s inability to finish the game off on the counter proved decisive, however, with Betis snatching a point in the closing minutes.

The draw is of little use to either club, with mediocre campaigns all but confirmed. With no wins in four, speculation surrounding Quique Setién’s future at Betis continues to grow. Meanwhile, Rubi will almost certainly be given more time following an up and down first season in charge of Espanyol.