Igor Tudor 2022/23: The tactics that Olympique Marseille can expect to see from the ex-Hellas Verona manager – tactical analysis

The Croatian, who was the head coach of Hellas Verona last season has signed a two-year contract with Les Olympiens and has taken over from Jorge Sampaoli after the Argentine’s shock exit at the start of the month.

His coaching journey began at Hajduk Split, winning the Croatian Cup in the 2012/13 season before joining Greek club PAOK then Turkish sides Karabükspor and Galatasaray, but he never stayed more than a season before having two stints with Udinese.

Tudor became Andrea Pirlo’s assistant at Juventus in the summer of 2020. Juventus won the Coppa Italia that season. Following Pirlo’s departure, Tudor was soon appointed as coach of Hellas Verona. Given the club’s predicament at the time, Tudor was expected to struggle. However, in his first ten league fixtures, Verona only lost one league match.

With Tudor in charge, Verona finished the campaign in 9th place and gained more points than they achieved under Ivan Juric the season before. They scored sixty-five league goals, which was the sixth highest in Serie A and only four less than league winners AC Milan.

This tactical analysis will feature data analysis that shows tactical trends instilled by Igor Tudor at Verona. We will examine the tactics within Tudor’s attacking approach and the principles within Verona’s defensive phase as they looked to defend on the front foot.

Given the number of jobs he has held in his short career, Igor Tudor is still considered to be a journeyman coach. Someone who hasn’t had time to implement a preferred tactical approach. That’s why his appointment as Jorge Sampaoli’s replacement has raised a few eyebrows. Sampaoli is seen as a disciple of Marcelo Bielsa, a manager whose tactical approach is built around intense pressing and quick vertical attacking play.

When you compare how Tudor’s Verona side fared in that department you can see why Marseille see Tudor as the coach whose approach is ideal to build on what Sampaoli has started. 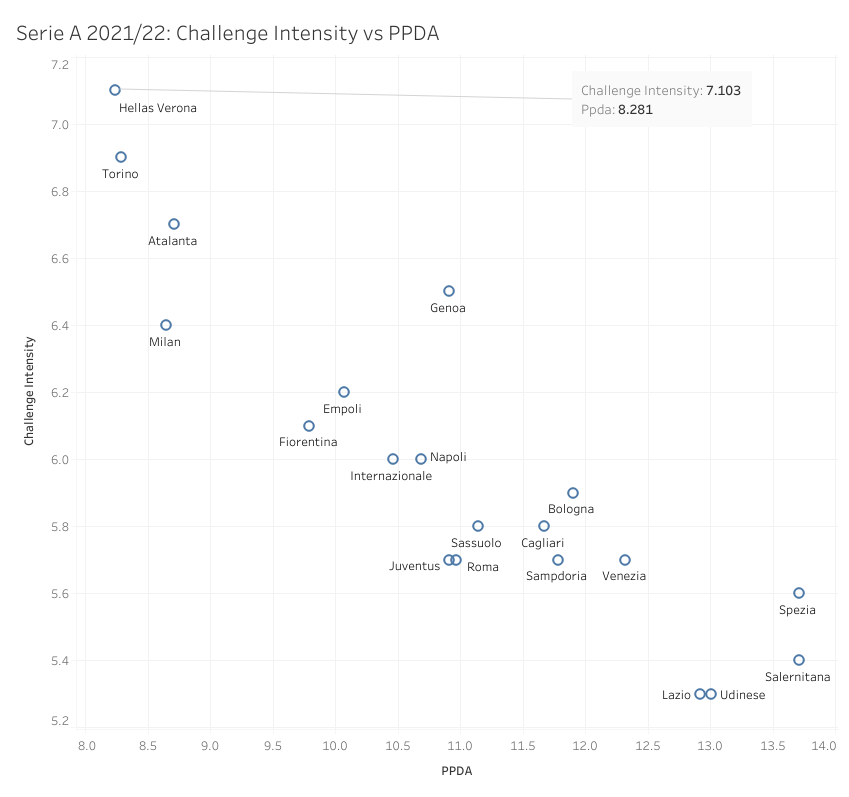 Verona finished the Serie A campaign in first place for both challenge intensity and PPDA last season. The teams they faced were only allowed to make an average of 8.28 passes before Verona looked to win the ball. Once the press was engaged, they made more duels, tackles, and interceptions than any other team as their challenge intensity averaged 7.1 per minute against their opponents.

By comparison, under Sampaoli whose philosophy is built upon intense pressing, Marseille’s average challenge intensity was 5.6 and the passes per defensive action averaged 11.88.

When they won the ball Tudor placed a lot of emphasis on attacking immediately. Verona would want the play to be progressed quickly, playing as close to their opponent’s goal as possible.

They attempted more progressive passes per 90 minutes than any other team in Serie A last season, averaging 71.16. When you measure this against their average possession which was only 49.71 you can see the intent on playing progressive football. 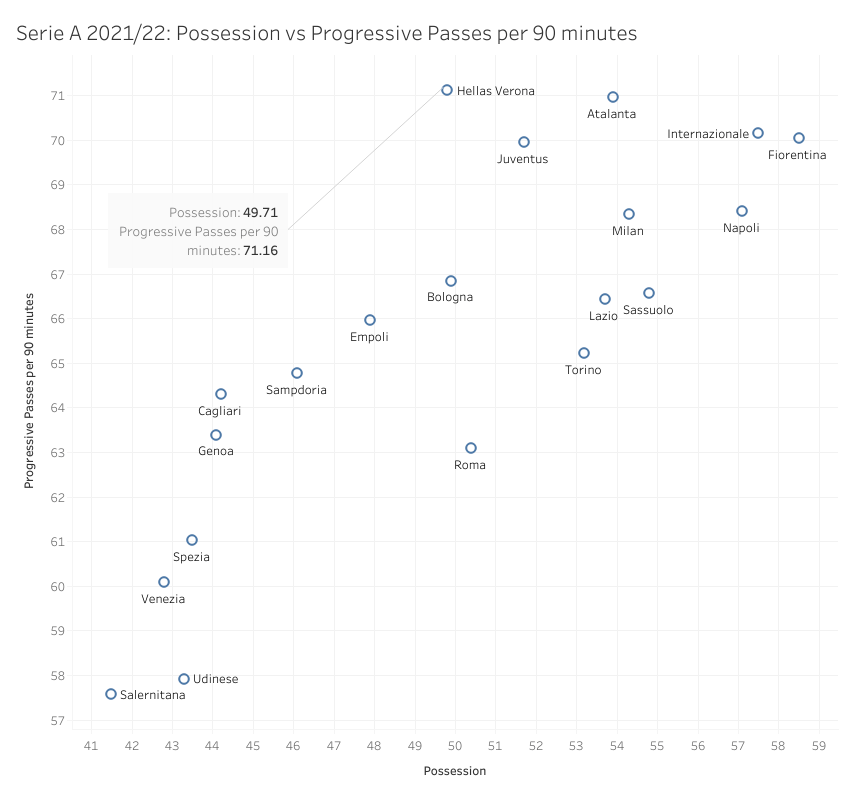 To summarise Tudor’s tactical approach, Verona pursue the ball aggressively with their press and when they do win the ball back, they look to play forwards and attack immediately. This leads to quick turnovers during both transition phases which explains why Verona last season scored a lot of goals but also conceded a high number of goals under Tudor.

The defensive system that Igor Tudor put in place at Verona revolved around winning the ball as high up the pitch as possible, through a man-orientated pressing system. The team will position themselves as close as possible, making sure there is limited space between each positional line.

Throughout last season Verona’s formation was 3-4-3. Sometimes Tudor would set it up as 3-4-2-1 or a 3-4-1-2 depending on the players available and the team they were facing.

Although the formation and the principles of his defensive strategy remained the same, Tudor would adapt the press to counter the opposition, based on their formation and how they built up.

The image below is an example of this. Lazio have dropped their midfield deep to join in with their build-up. Sarri’s team have seven players in their half of the pitch as they build in a 4-1-2 structure. Verona whose formation and usual pressing structure is pressing high in 2-3 or 3-2 defensive block has pushed the wing backs high to block the wide areas. This creates 7v7 in Lazio’s half of the pitch and has every zone covered and ready to defend. The risk in this is that Verona has left their three centre-backs in a 3v3 situation with Lazio forward players at the other end of the pitch.

As soon as Lazio’s centre-backs make that first pass, then Verona’s press against the ball is triggered as each player will look press intently against the man in their position. 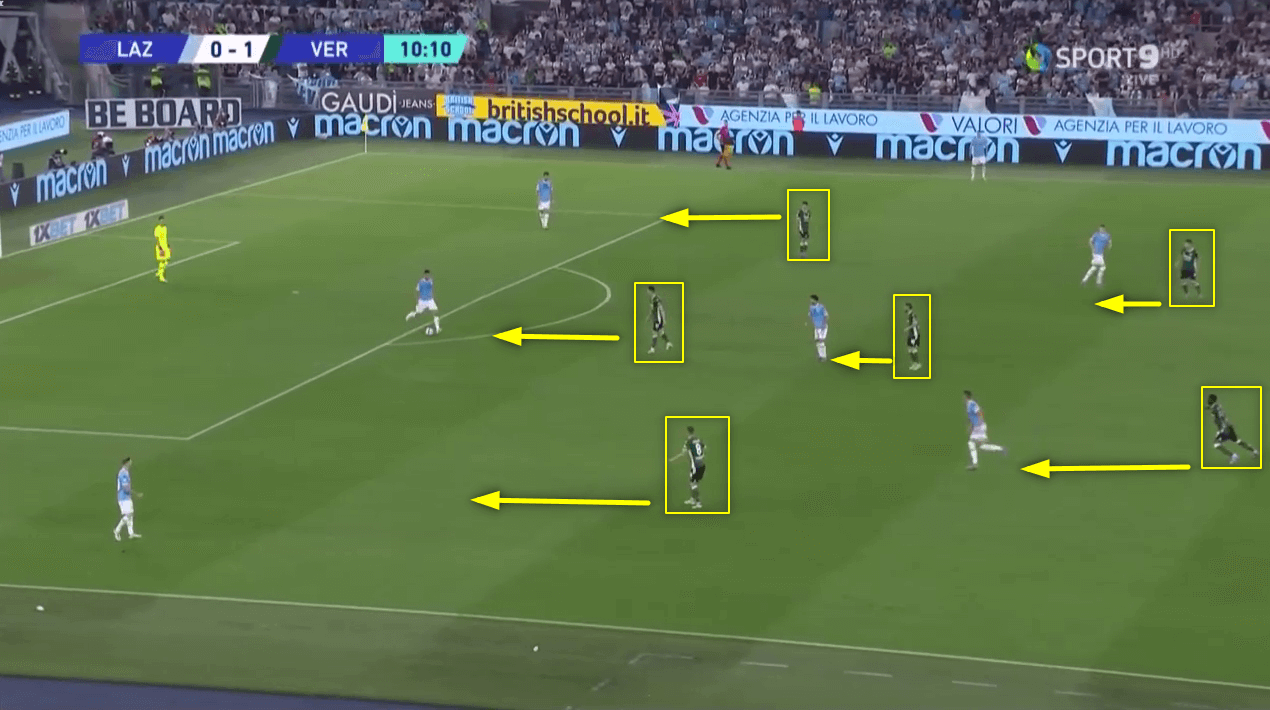 An example of this is shown against Sampdoria below. As Sampdoria attempt to progress the play through the centre, the ball is played to Sampdoria’s centre forward who has dropped deeper to hold up play. As soon as that pass is made Verona’s centre-back vacates his defensive line and follows his man as he looks to intercept the play.

You can see how Verona’s players surround the ball, ready for the next phase of play. They are positioned to pounce on the second ball, or if Sampdoria retains possession each of Verona’s players is set up man to man against each Sampdoria player in the surrounding area. 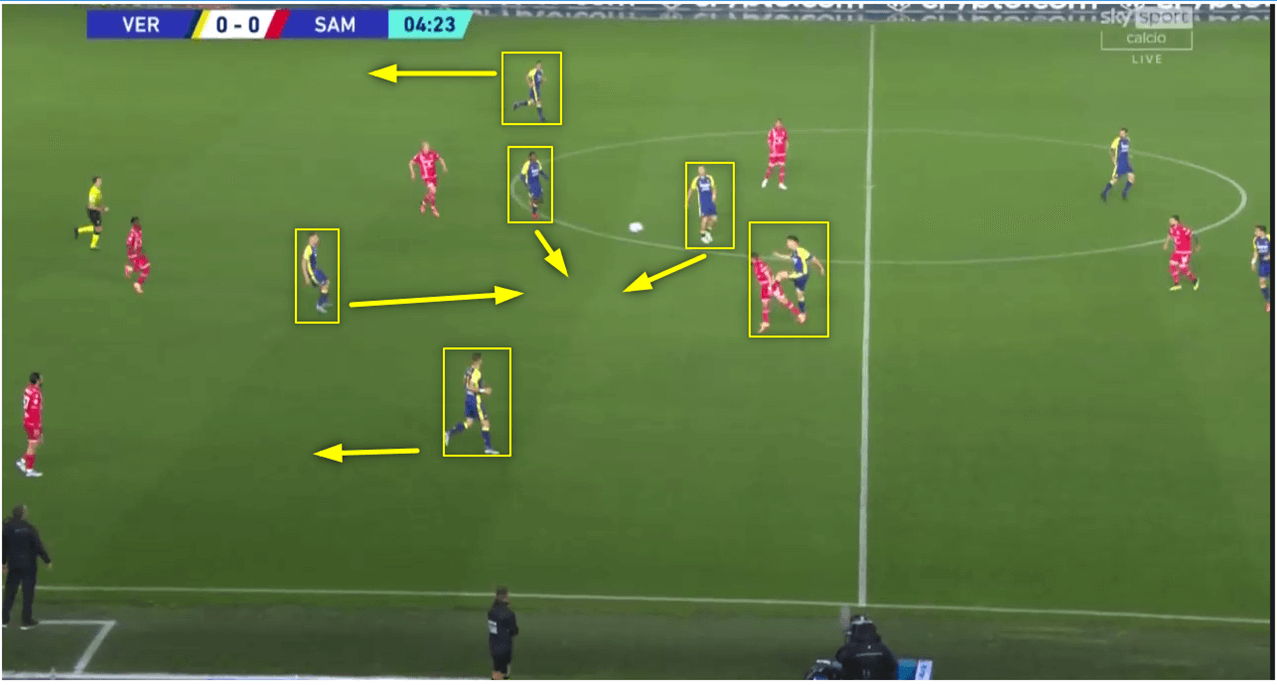 A man-to-man marking system all over the pitch was a common tactical trend implemented by Igor Tudor at Verona last season. It brings a high-risk situation as the team won’t keep a regular defensive shape out of possession and you rely on the individual to win his 1v1 battle. The benefits are the ball is being pressed at every point all over the pitch which gives you a greater opportunity to win the ball back quickly.

You can see from the positions taken up by Verona players against AC Milan how the man-to-man marking is deployed by Tudor. There is no positional structure within the team’s defensive shape as each man follows their man. 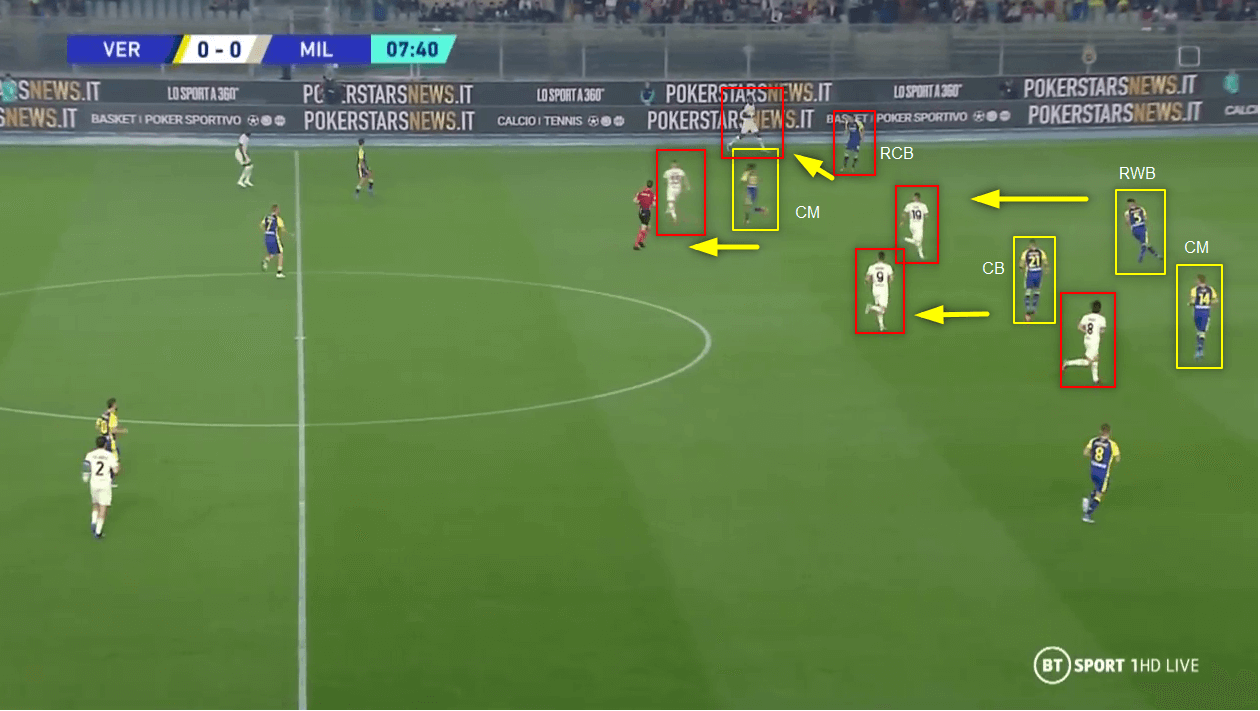 As soon as possession is won Tudor’s tactics at Verona were focused on progression and verticality. This is something that the Marseille fans will react to, given their fondness for managers like Sampaoli and Bielsa. Tudor will want Marseille to get the ball forward quickly. They will play with full coverage of the pitch as they look to attack through the centre and from out wide.

During the build phase, Verona’s back five switched into a back four as one wing back would move higher up the pitch and the other remained within the defensive line as you can see below.

Verona didn’t retain possession for long periods in the defensive third. The wing-back pushes higher so he can be the outlet that enables the team to progress the play immediately and stretch the opposition. More so against teams who congest the pitch centrally. 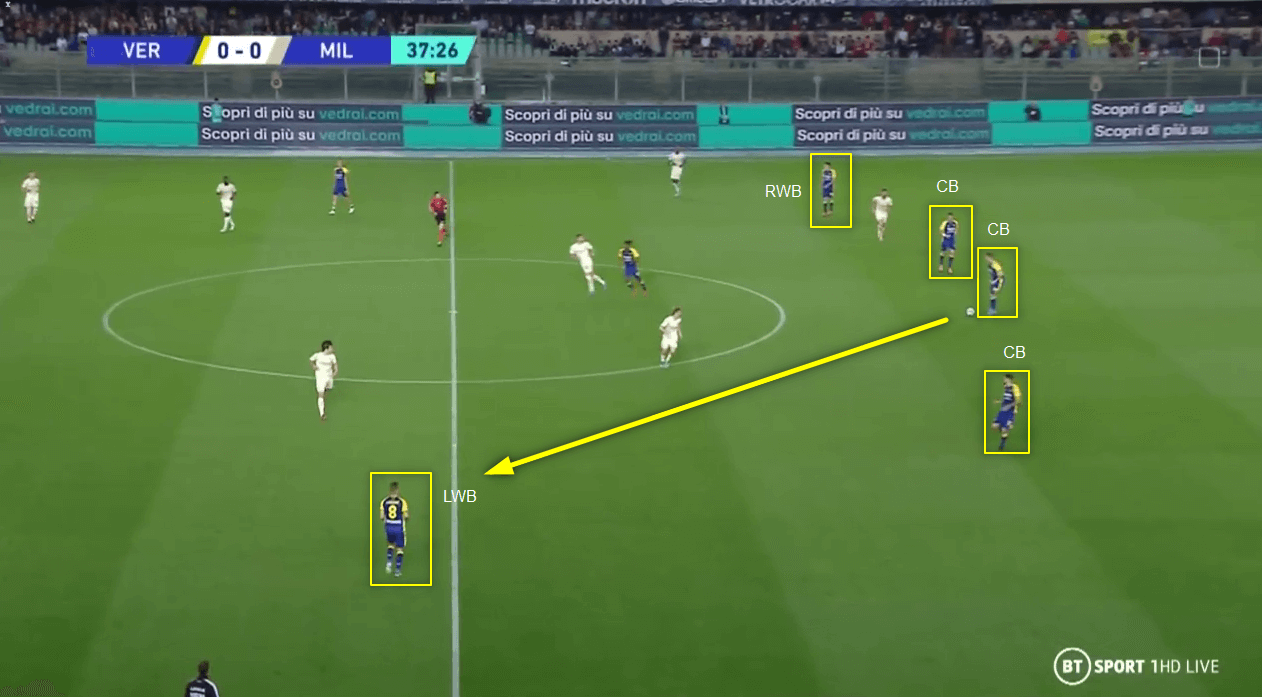 Alternatively, the outside centre-back whose channel they are playing through will make a forward run and join the attack. Tudor prefers his teams to get as many players as possible in the opponent’s half of the pitch, believing three defenders are enough to deal with any counter-attack that may follow. However, his preference is for the wing back on the opposite side to join the attack.

Once the play moves further up the field into the opposition’s half, Tudor’s tactics place a lot of importance on the wing backs. They become heavily involved both with and without the ball.

When Verona played a team that wasn’t so attacking-focused and I Gialloblu were given more possession the wing-backs are instructed to push forward into the final third and try to overload the opposition’s defensive third. This lets Verona’s formation transition from 3-4-3 into a 3-2-5. 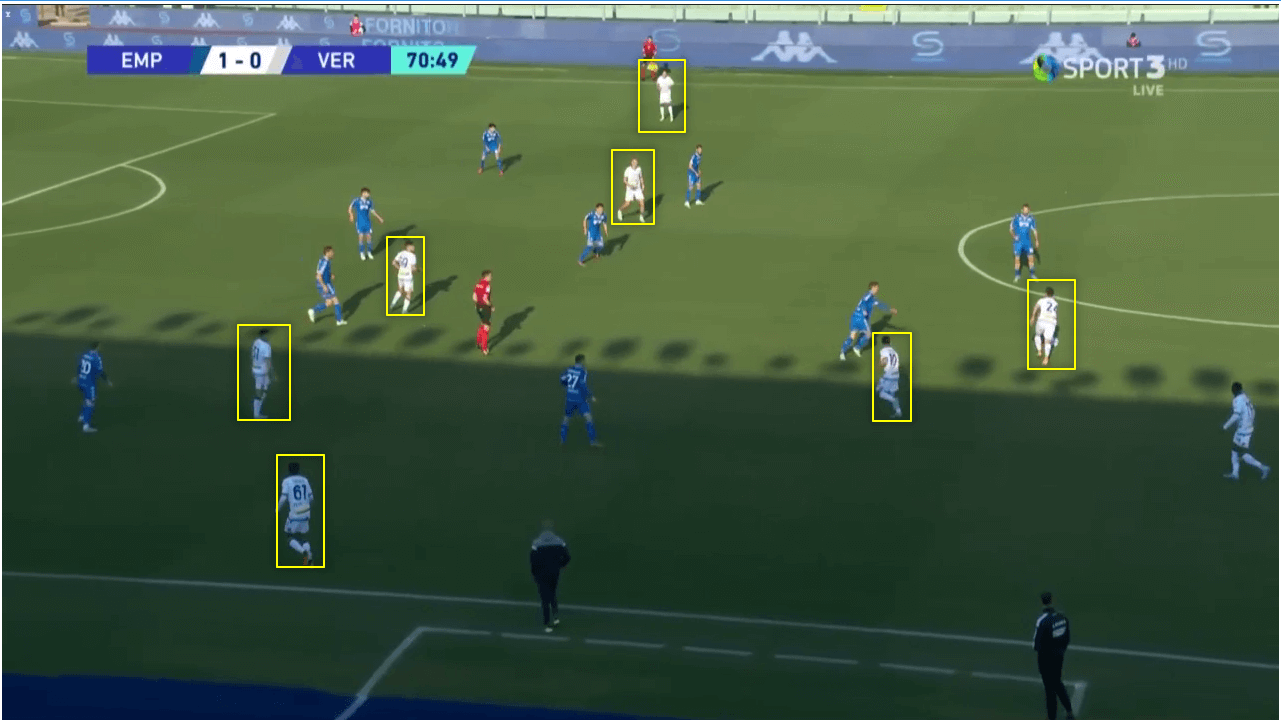 Verona would ideally transition into attack predominantly through the middle of the pitch. This was to draw teams towards the balls. Once the other team completed that move this created more space out wide.

Milan has six players in the centre of the pitch as Verona exploits the spaces down each channel and creates a 2v1 overload on both sides. 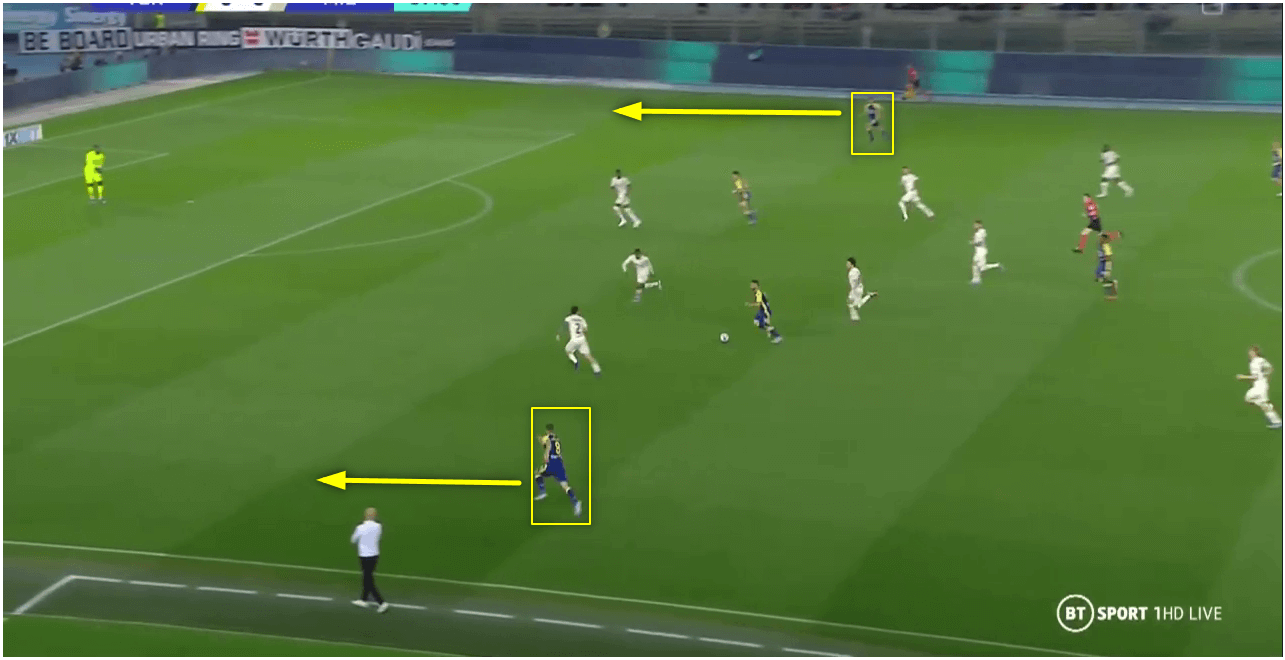 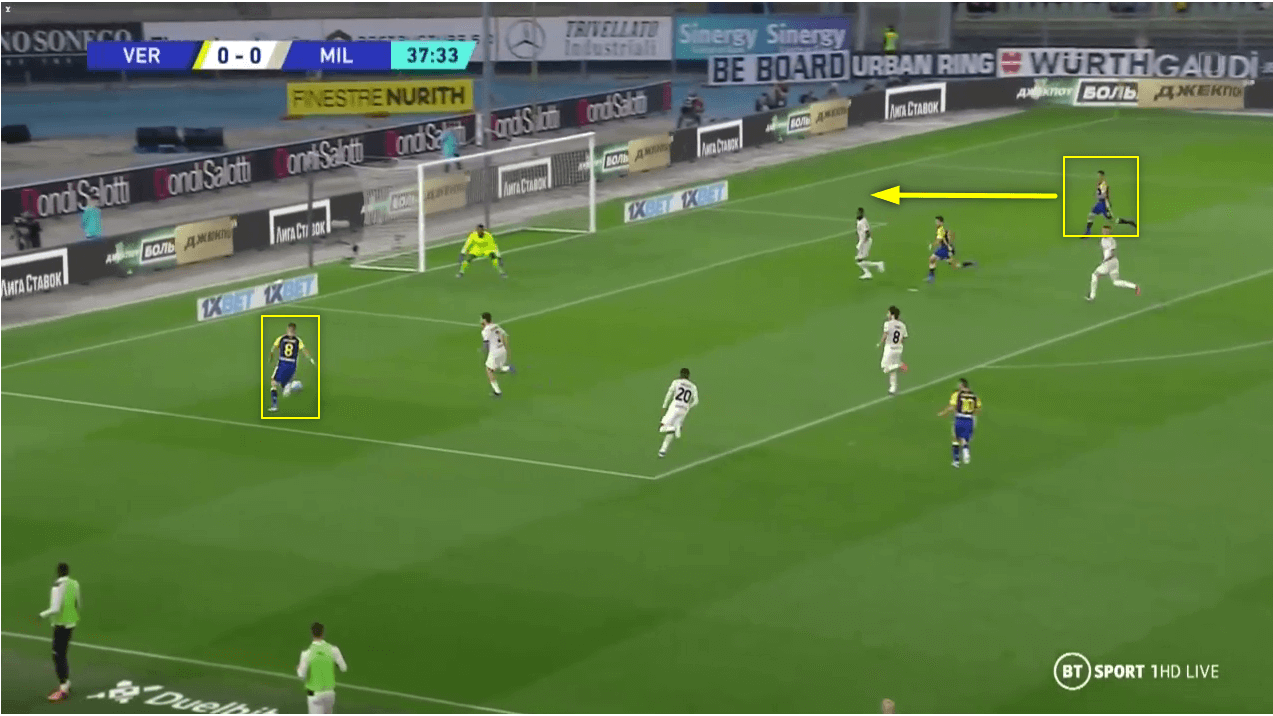 The data shows how involved and how important of a role the wing-backs will be for Marseille under Igor Tudor’s tactical set-up.

Taking over Marseille at this time could prove to be tricky for Igor Tudor. He is taking over a team that built a lot of momentum with Jorge Sampaoli. The team finished second in Ligue 1, qualified for the Champions League, and got to the semi-finals of the Europa Conference League.

With PSG likely to repeat its dominance domestically, will Tudor be able to build on what Sampaoli started to build or will this move turn out to be a curse the Croatian coach should have avoided and perhaps wasn’t ready for?

The former Juventus man will continue his courageous attacking and intensive style of football. Although the Marseille fans will appreciate the entertainment, he will have to adapt to managing a team that is expected to win rather than managing a team who appreciates a win.

This analysis has shown how Tudor focuses his tactical approach on defending with intensity and attacking with risk. We have looked at the data output of his time in charge of Verona and shown the Marseille fans tactical trends they can expect to see at the Stade Vélodrome next season.