Serie A 2021/22: How Salernitana’s 3-5-2 is helping them achieve one of Serie A’s great escapes – tactical analysis

Salernitana’s draw with Cagliari on Sunday proved to be vital in this season’s Serie A relegation battle. This result has left Salernitana one point above the relegation zone but has ensured their survival is now in their own hands with just two games remaining.

It’s been a dramatic second half of the season for Salernitana – the club were rooted firmly at the bottom of Serie A on just eight points. It was off the field issues that had taken priority for both the club and its supporters.

With the club in disarray over ownership issues that would have seen them excluded from Serie A, Danilo Iervolino’s €10m offer to buy the club was accepted on New Year’s Eve. This was minutes before the exclusion deadline set by the Italian Football Federation.

Since then, the club has been on an upward trajectory. On the 15th of February, the club appointed Davide Nicola as their new manager. Under Davide Nicola’s stewardship, the club has collected a total of seventeen points out of a possible thirty-nine. This is over double the number of points earnt in total for the first half of the season.

In this tactical analysis, we will review the key tactical traits used by Salernitana since Davide Nicola’s arrival. This analysis will give a greater understanding of the team’s tactics and examine how they have become the most in-form team in Serie A.

Davide Nicola set Salernitana up to play in a 4-2-3-1 formation upon his arrival. The team picked up three credible draws in its first four games against Milan, Bologna, and Sassuolo. There were notable improvements in the team’s expected goals and assist output, as well as the team achieving a higher percentage of possession in each game.

However, three defeats in a row then caused Davide Nicola to switch to a 3-5-2 system. The formation change has paid dividends for Salernitana.

Since the change, the team has played eight games winning four drawing two and losing two. The club have picked up more points in these eight games than they did in the entire period between August and February.

Switching to a 3-5-2 formation enables the team more defensive solidarity through the central areas with a three-man defence and three-man midfield. It allows the team to transition to 5-3-2 when they are without the ball and defend in numbers.

It grants the team flexibility with how they press the opposition. Which is good for game adaptability. The 3-5-2 enables the team to press high with a man orientated press. The team can play a medium block where the press is triggered and it allows the team to be able to play with a low block and aim for central compactness.

When Davide Nicola took control of the club, Salernitana conceded fifty-two goals in twenty-two Serie A games. On average that is 2.36 goals a game. For Salernitana to have any chance of surviving relegation this season the defensive structure would need to improve.

Davide Nicola has Salernitana defending in a medium block. As a team, they cut off the passing lanes and space through the centre of the pitch. This forces the opposition to play through the wide areas. Salernitana will then look to press aggressively and force them to play backwards.

They stop the ball from being played through the centre by keeping a compact five-man structure. The three central midfielders and two centre forwards form a 3-2 defensive block. 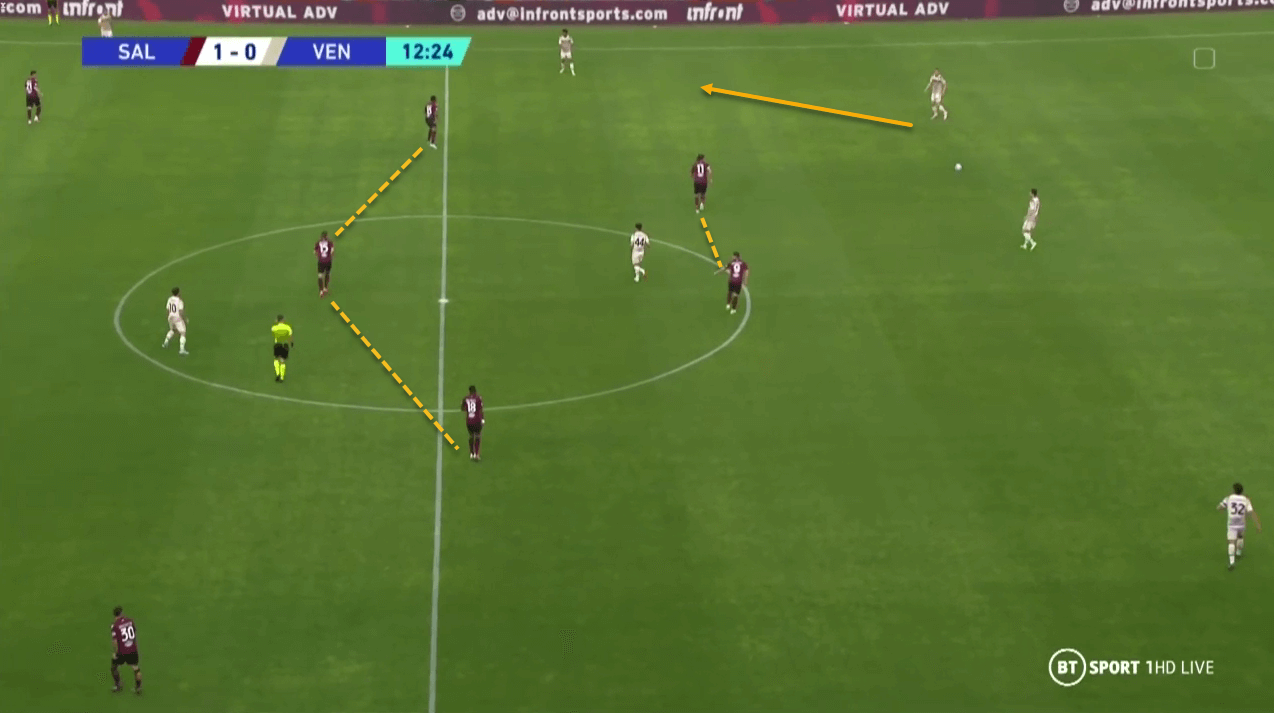 You can see the shape remains with five players. Neither of the centre forwards breaks the shape by going to press the man in possession. Unless the ball is being carried into the middle third then Salernitana will keep their shape. 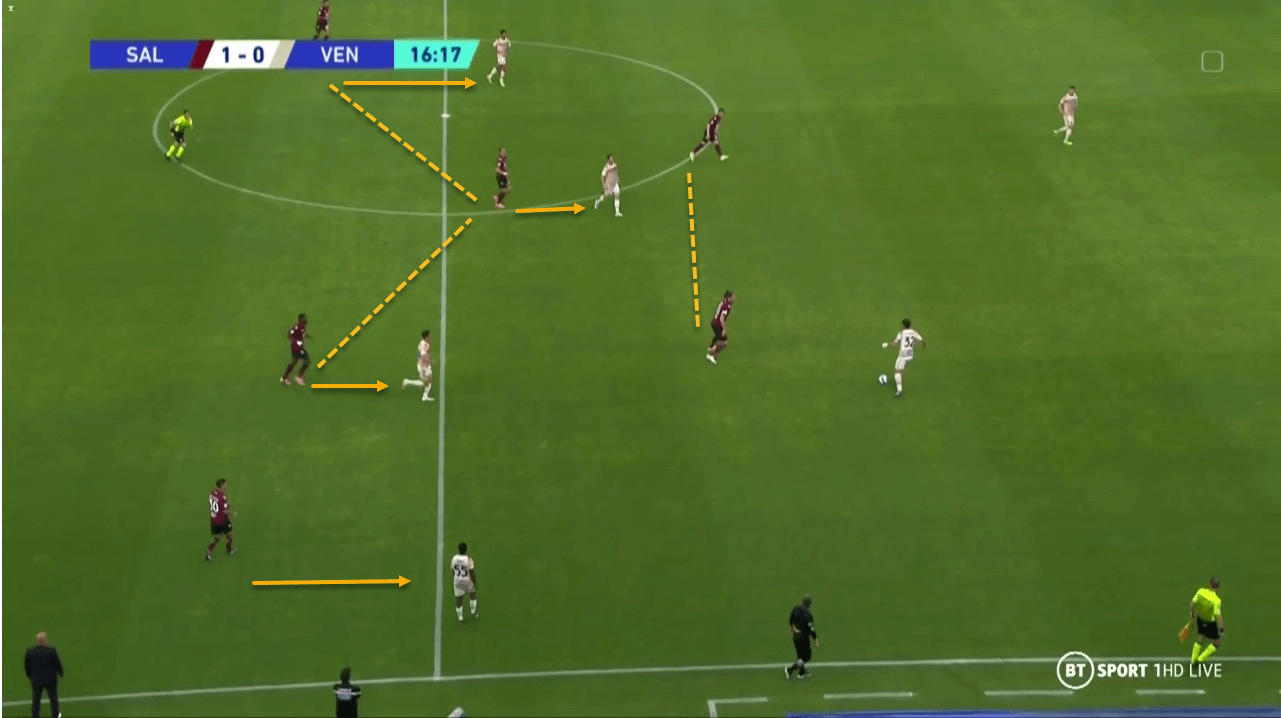 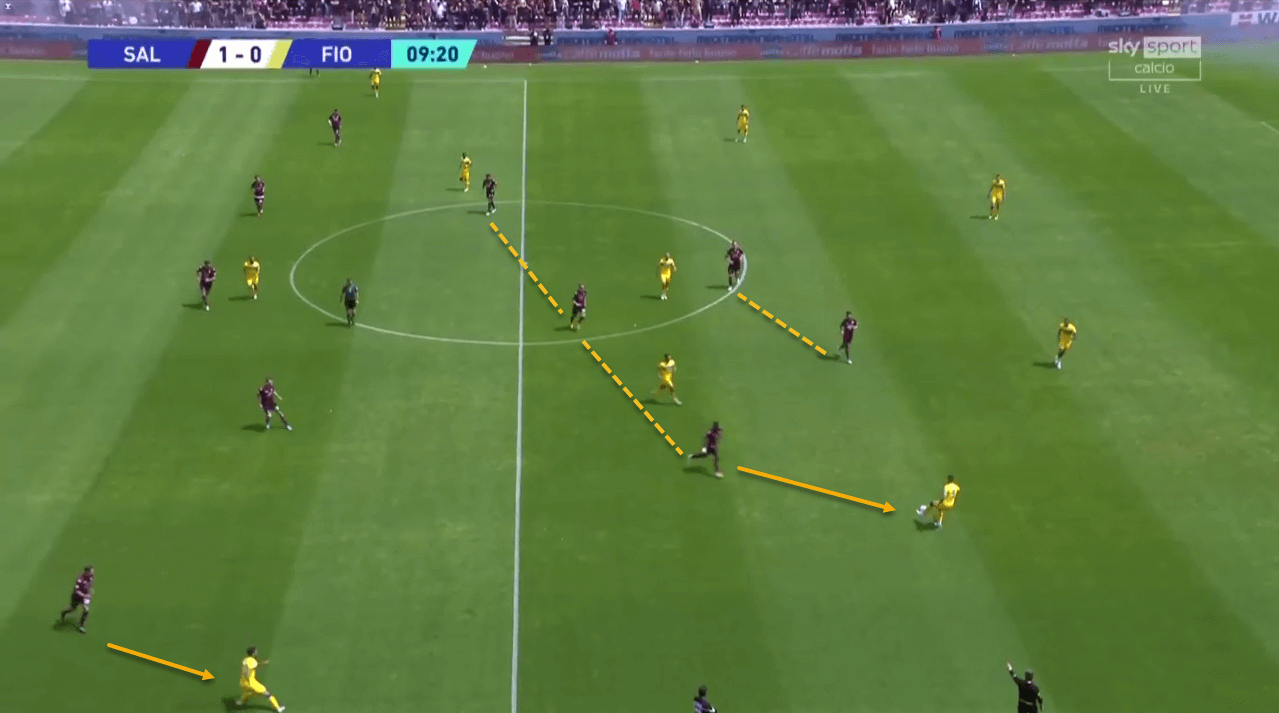 When they are defending deeper, they look to defend with five players as the wingbacks drop into the full-back positions.

This is standard for the 3-5-2 formation. They stay compact and look to defend the penalty area, leaving space in the wide areas to invite the opposition to attack from out wide.

This is to stop the opposition from gaining any advantage and posing any threat between the lines. It allows the Salernitana centre backs to close down the attacker who attacks centrally beyond the midfield. Or if an attacker drops and looks to pick up the ball in between the lines. 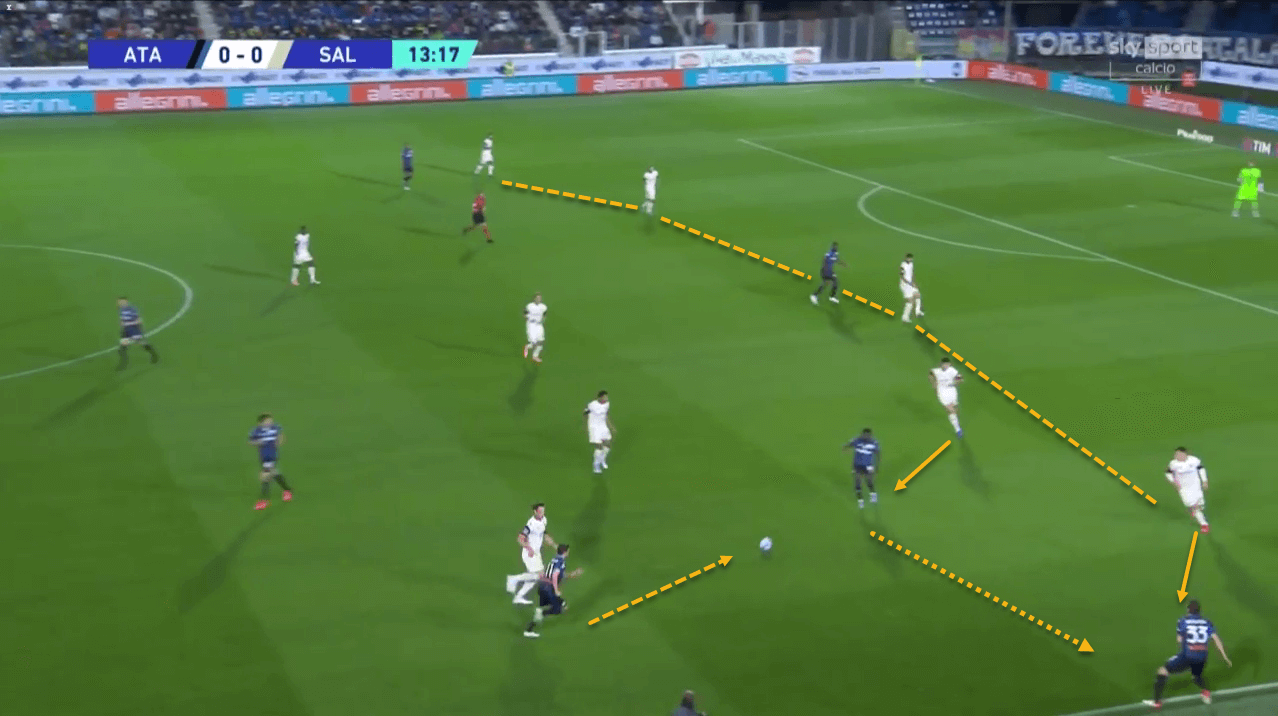 As you can see here, the other two central defenders provide the cover which limits the risk and closes any space. 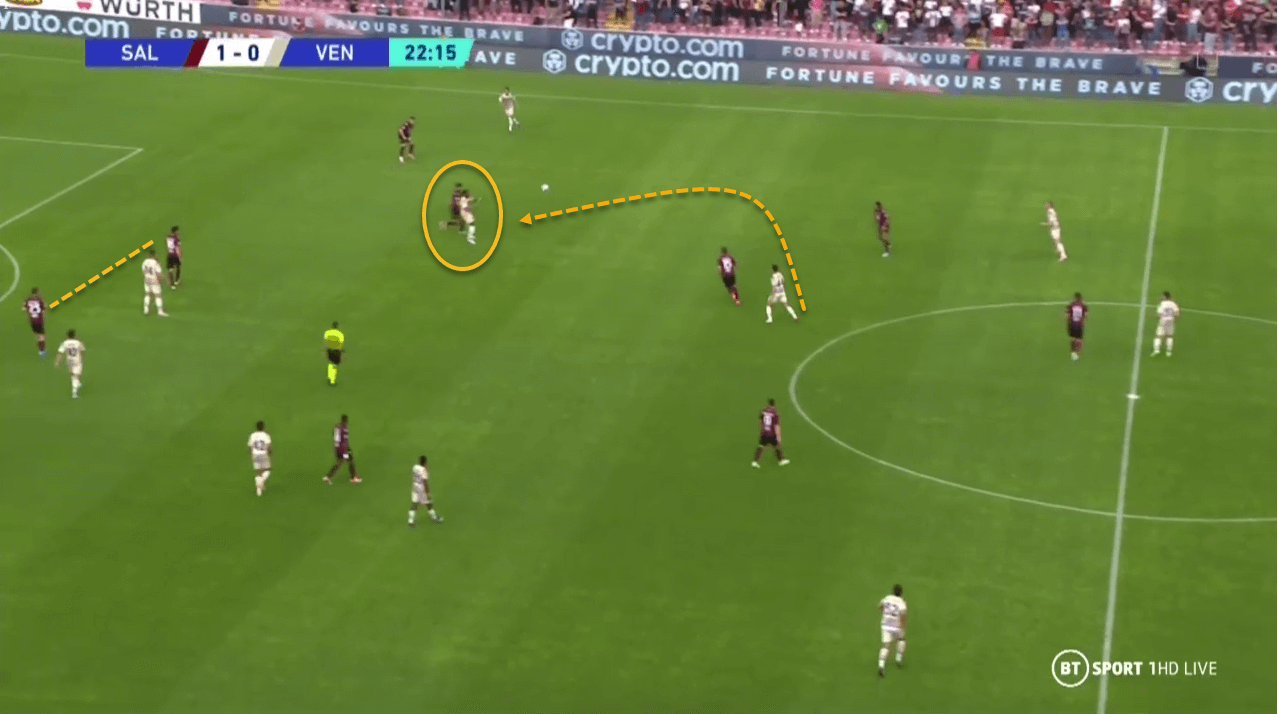 During their build-up, Salernitana do not have a specific approach. It can vary. Sometimes they play from back to front quickly and other times they will build up through the centre backs.

The centre backs are more expansive with their positioning. They push out wide to open up the pitch, which provides more passing options. This enables the wing-back on that side to play higher up the pitch and join the attack. It also keeps the opponent’s full-back in a withdrawn position.

The image below also shows how pushing your centre back wide during the build-up allows Salernitana to overload that side of the pitch. Emil Bohinen and Éderson are well-positioned to create a wide overload. 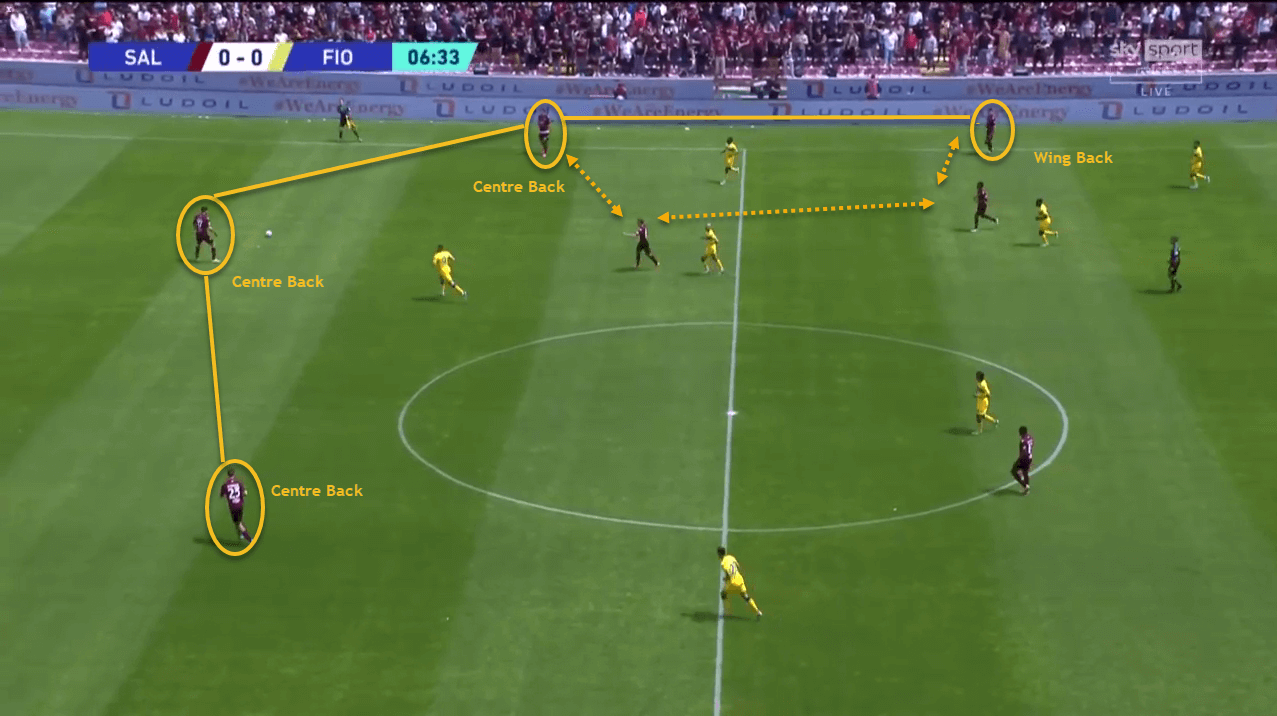 Building up through the wide areas allows Salernitana to protect the centre of the pitch if they lose possession out wide. In this setup, Salernitana have two centre midfielders that remain central which stops them from becoming vulnerable to quick transitions from the opposition.

When they play out wide, the play is supported by a centre forward. Doing this can help create overloads in the wide areas, and it pulls the defenders from the position which in turn creates more space to attack.

Since Davide Nicola switched to the 3-5-2 formation the two centre forwards have been Milan Duric and then either Simone Verdi or Federico Bonazzoli that partners him. Duric is the striker that plays as the focal point, and it is Bonazzoli or Verdi that likes to drop off and join the play.

Look at the space that Federico Bonazzoli moves into here. He mas moved between the Venezia defence and midfield and could potentially occupy three of their players as he moves into the space highlighted. Even if he does not receive the pass, it disrupts Venezia’s shape. 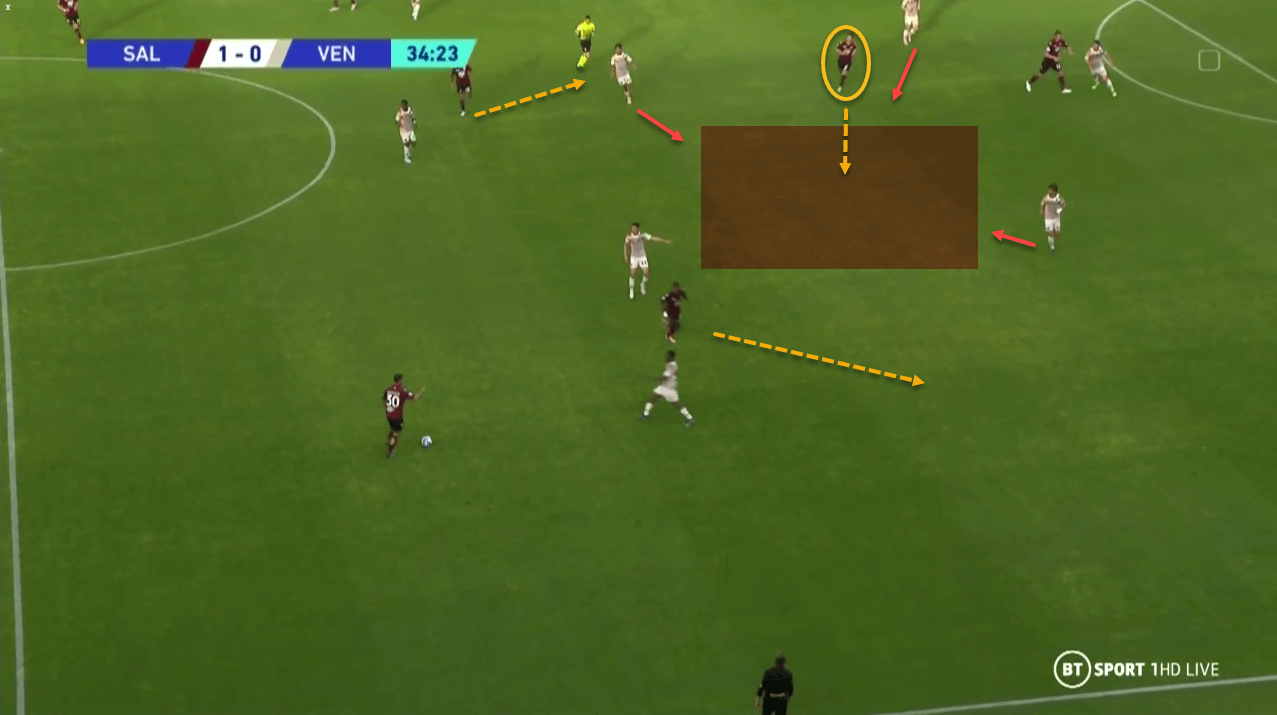 Milan Duric playing as the focal point is what provides Salernitana with the ability to offer variety within their attacking play.

One of the team’s strong suits since Davide Nicola took charge is that when they hold possession, they can play directly if their build-up play is breaking down.

Salernitana are effective at getting players around Duric with this type of attack and then breaking into the space created in the opposition’s attacking third. 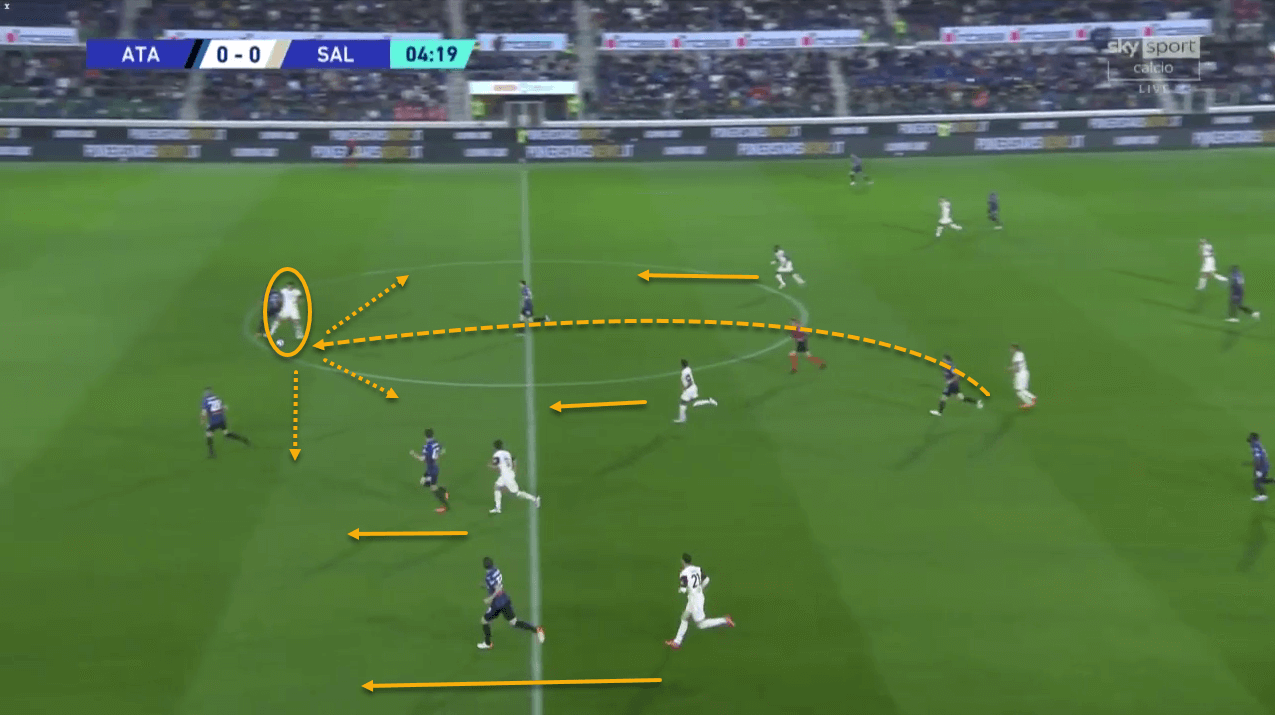 When Simone Verdi or Federico Bonazzoli drop off to join in the play it can leave Milan Duric isolated. So Salernitana must offer additional attacking options so that Verdi or Bonazzoli can remain central and support Duric.

When Salernitana hold possession and the centre forwards remain central, the outer centre back will join the attack. The player will offer an underlapping run on the inside of the wing-back.

In this instance, you can see how the left centre back Federico Fazio joins the attack. His run to the wide left channel stretches Venezia and allows them to maintain a numerical advantage on that side. 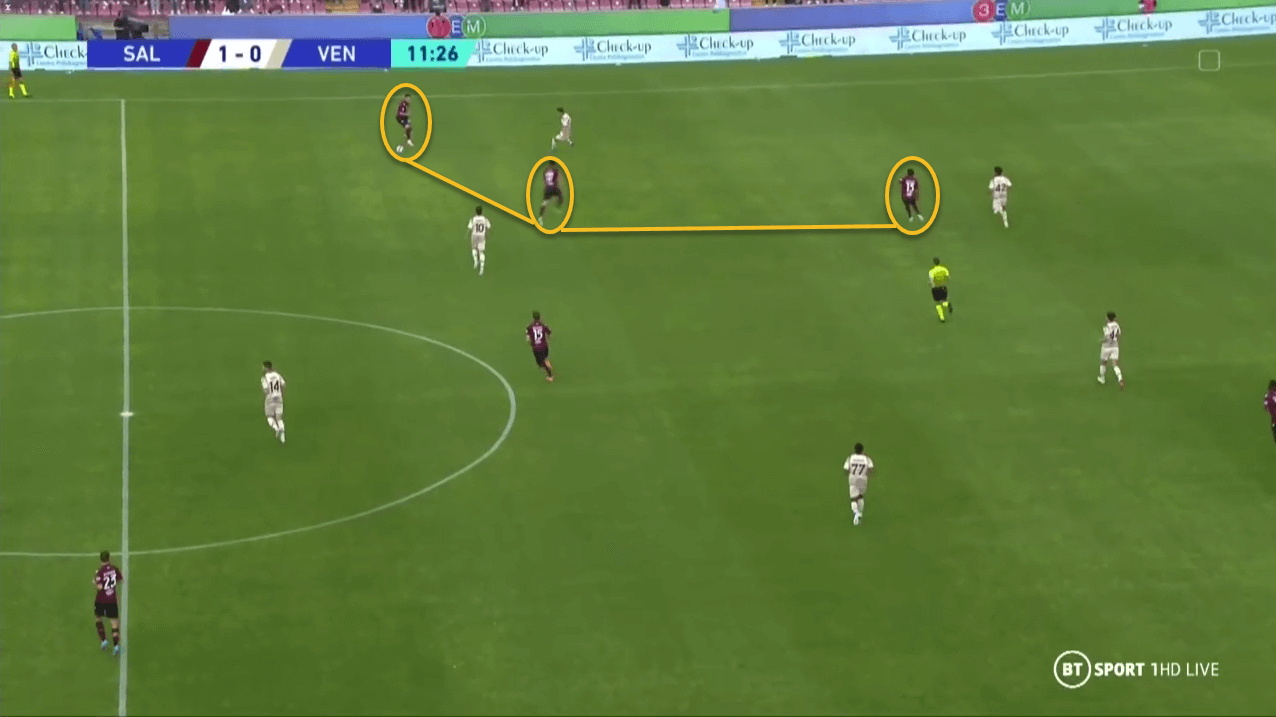 The underlapping run can also create an overload in central areas, as evidenced below. With the centre-back occupying a position that might normally be occupied by a central midfielder. The centre midfielders can then look to remain central and play between the lines. Or offer additional support to the centre forwards.

You can see below how Federico Fazio’s position in the attacking third. He pulls Venezia full-back Aleš Matějů inside which creates space on the outside for Nadir Zortear to attack. 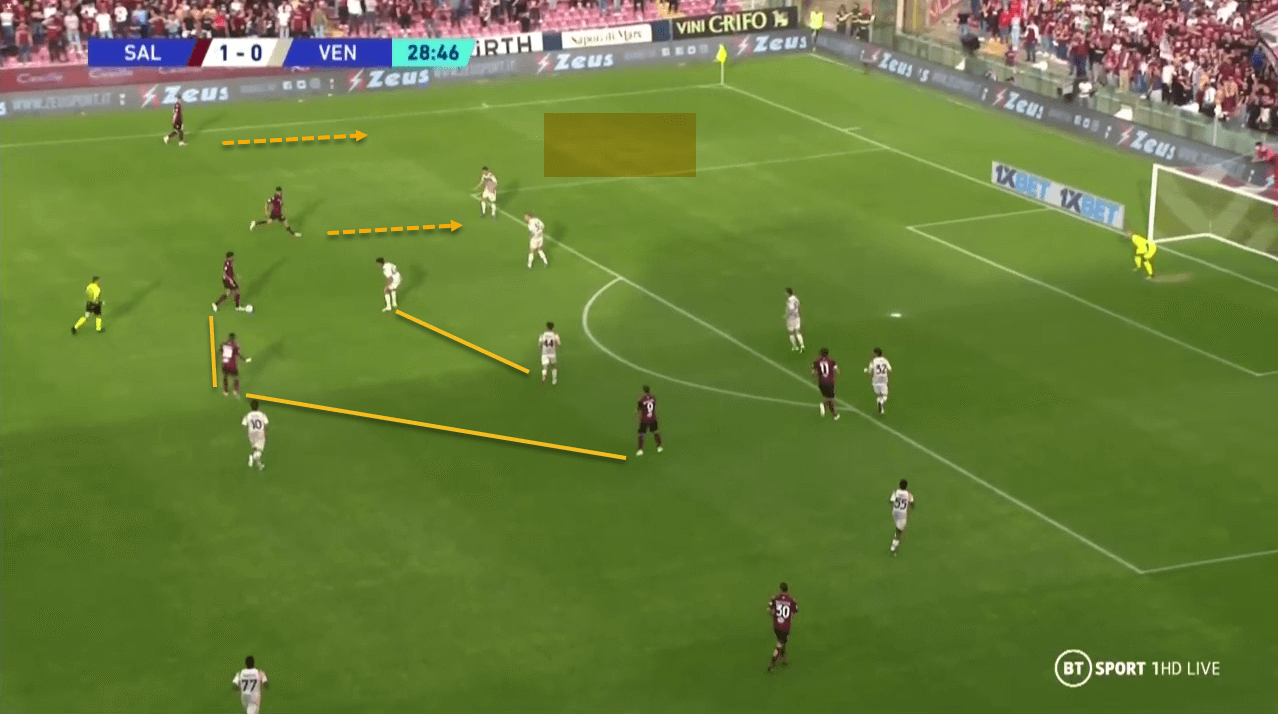 This analysis shows how significant the appointment of Davide Nicola was for Salernitana and how effective his tactical approach has been. We have broken down the key principles within his tactics and shown how well they impacted this team.