North Carolina Courage hosted Washington Spirit on May 7, 2022 for the final of the NWSL Challenge Cup 2022 and at the end, North Carolina Courage were able to lift the trophy after winning 2-1 in an exciting game. In fact, this win came after a long and successful journey for North Carolina Courage who finished at the top of Group A in the group stage phase while not losing a single match. Then, they faced Kansas City in the semi-finals and excluded them with a 1-2 final score to reach the final and win the trophy. North Carolina Courage have shown during this pre-NWSL tournament that they are fully ready to compete seriously for the NWSL title and lifting this trophy confirms this idea to everyone and gives extra confidence to the players ahead of the start of the competition.

When it comes to Washington Spirit, the team did their best throughout the NWSL Challenge Cup but at the end, their performances were not sufficient to beat North Carolina Courage. In reality, Washington Spirit were able to stop North Carolina Courage during the group stage phase as they drew 2-2 twice. Washington Spirit finished second of the group and excluded OL Reign thanks to penalties in the semi-finals. The team proved their worth by reaching the final and battling until the end for the trophy and this will be important for them to be able to identify the mistakes that prevented them from actually doing it and work on improving their weaknesses. At the same time, the team’s experience and chemistry that was gained from their participation in this tournament will be very useful during the NWSL as it will help the team be competitive since the beginning and avoid losing points easily.

In this tactical analysis article, we will look at both teams’ performances in an attempt to break down North Carolina Courage’s attacking tactics and identify the reasons that led to Washington Spirit’s defeat.

North Carolina Courage started this match according to the 4-2-3-1 formation using Katelyn Rowland as a goalkeeper, Merritt Mathias, Kaleigh Kurtz, Abby Erceg and Carson Pickett in defence, Malia Berkely, Denise O’Sullivan as central midfielders, Emily Rose Gray and Diana Ordóñez on the wings with Debinha playing as an advanced playmaker behind the striker, Kerolin.

On the other side, Washington Spirit opted for the 4-2-3-1 formation relying on Aubrey Bledsoe as a goalkeeper, Kelley O’Hara, Emily Sonnett, Sam Staab and Julia Roddar in defence, Taylor Aylmer and Dorian Bailey as central midfielders, Trinity Rodman and Anna Heilferty on the wings and Ashley Sanchez as an advanced playmaker in support of the striker, Ashley Hatch. 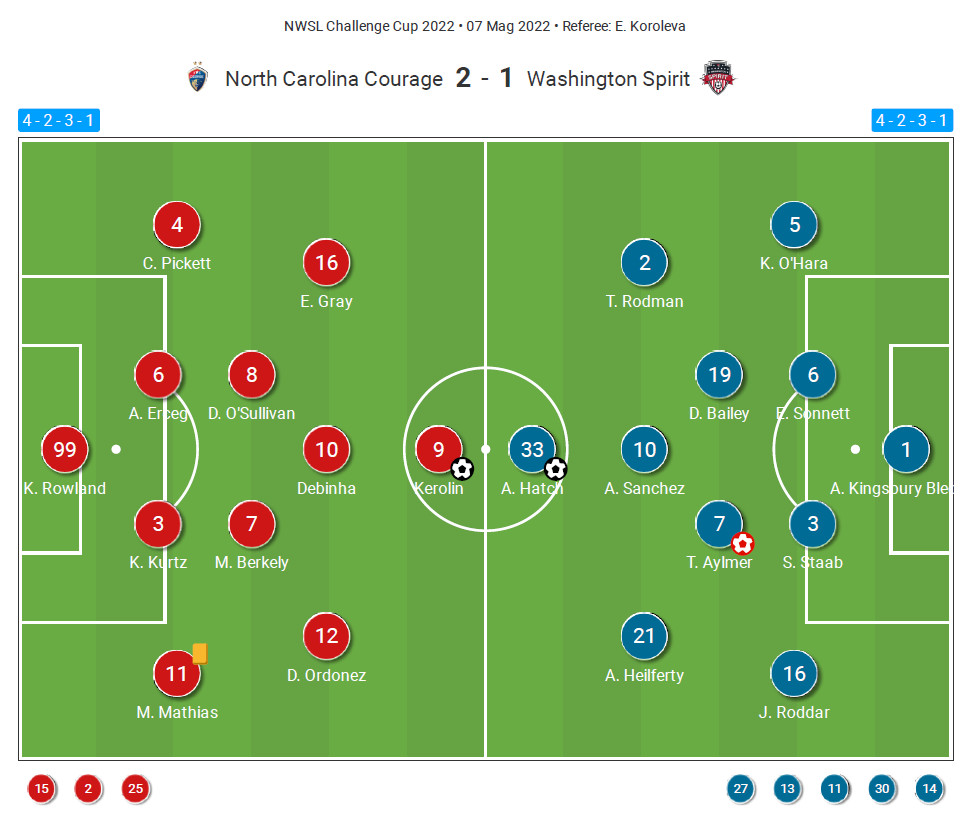 North Carolina Courage started the match with the right mentality by getting hold of the ball with confidence and continuity while attempting to reach the final third regularly. They were able to threaten Bledsoe’s goal with a shot from Gray at the 7th minute after penetrating from the right wing. Soon after, Debinha, who was at the center of North Carolina Courage’s attacks, collected a ball in defence and started a counter-attack by herself as she feinted past her marker and ran until she was close to the final third. At the same time, she was intelligent enough to notice Kerolin’s movement at the back of Washington Spirit’s advanced defence and pick the adequate timing for her through pass in order to avoid a possible offside situation. Kerolin’s technique was crucial in this action as well since the Brazilian striker slowed her pace down when she reached the edge of the box, fixed her opponents and the goalkeeper before shooting towards the desired left angle and scored the first goal of the match. 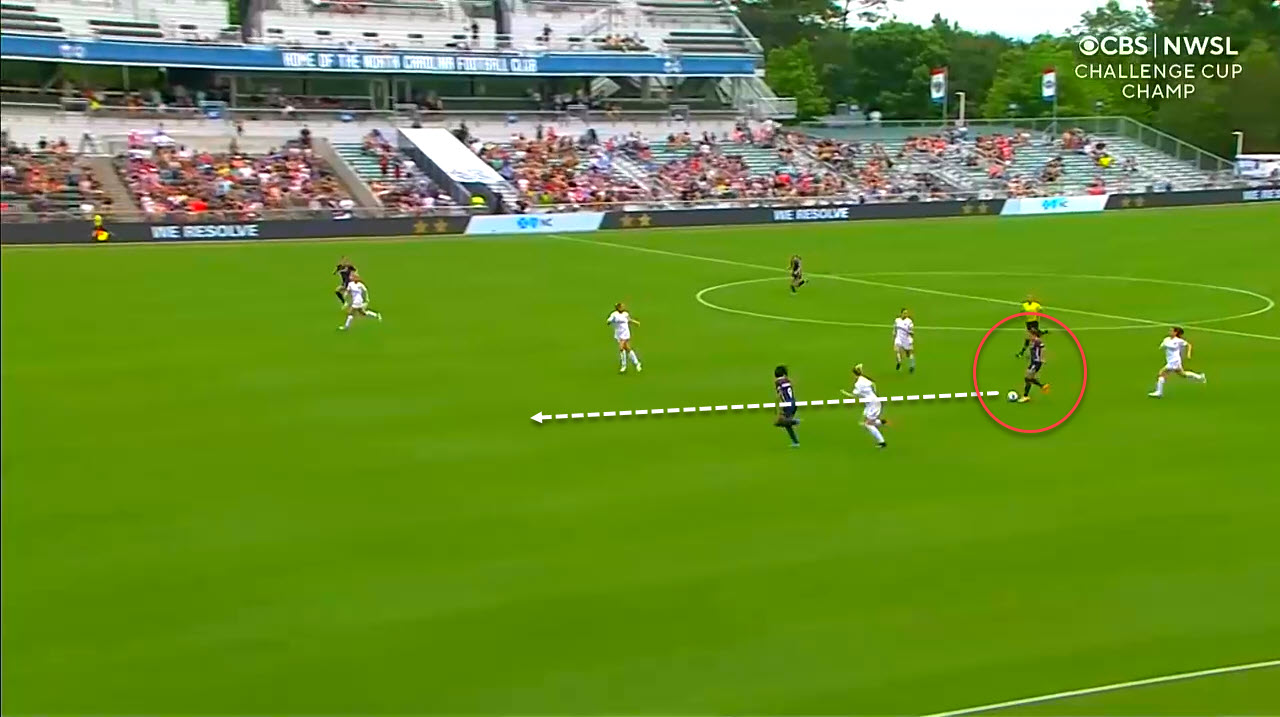 Just two minutes after the goal, North Carolina Courage did not retreat and continued their attacking attempts. Kerolin received a pass into space at the right wing and was surrounded by two opponents while Debinha was waiting inside the box, acting like a second striker. This change of positions shows a tactical flexibility within this team and proves that these players have the quality needed to play with ease inside the final third. As you can see from the following picture, Gray came from behind and was monitoring the situation when she saw Kerolin aiming at crossing. And as soon as she saw the pass coming behind Debinha, she instantly advanced to find herself on a one-on-one situation with Bledsoe but unfortunately for North Carolina Courage, Gray’s shot was saved by Bledsoe and the team missed a concrete goalscoring opportunity that would have allowed them to secure their win quite early. 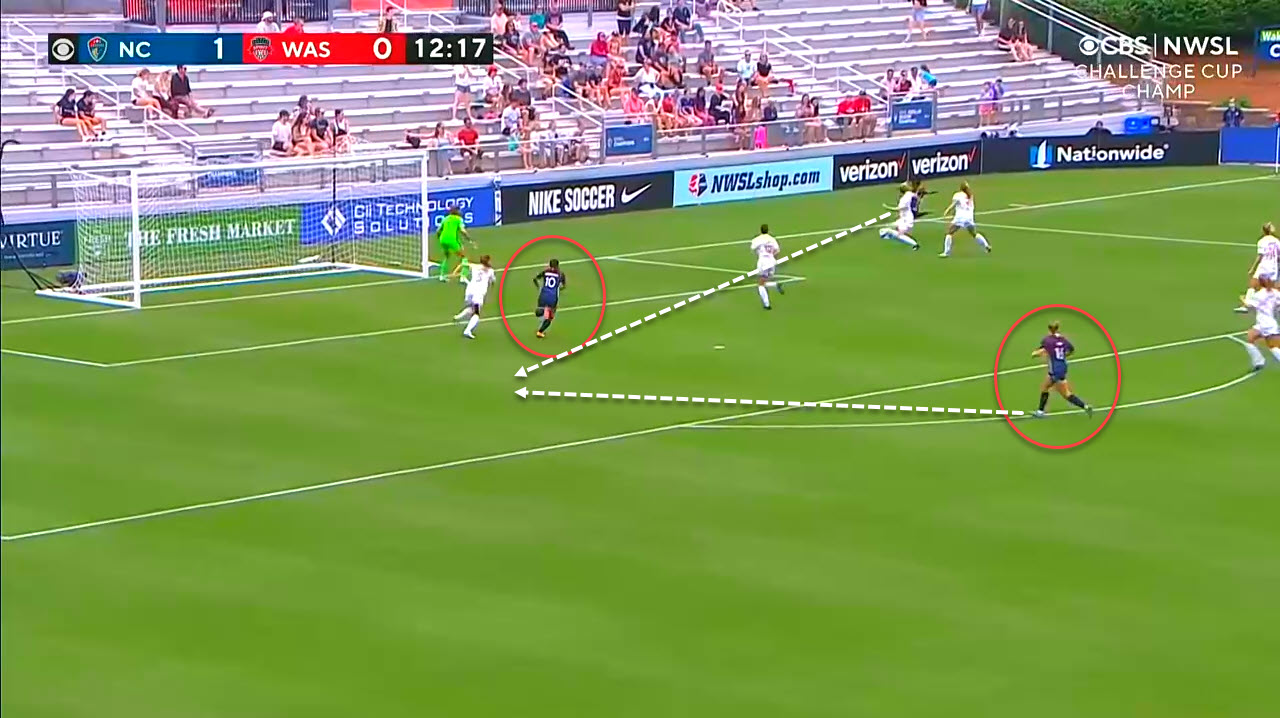 North Carolina Courage were able to exploit Washington Spirit’s moments of doubt and lack of concentration very well as they created 4 counterattacks with a success rate reaching 75%, such as the first goal action. Another counterattack occurred on the 16th minute when they exploited a wrong pass from a Washington Spirit player and advanced quickly to exploit the fact that their opponents’ defence was high and unorganised. As it is shown in the following picture, Berkely advanced with the ball and passed to Debinha who quickly made a one-two combination with Ordonez to exclude a defender and penetrate inside the box. Afterwards, Debinha attempted a first-time shot that hit the post and went out. 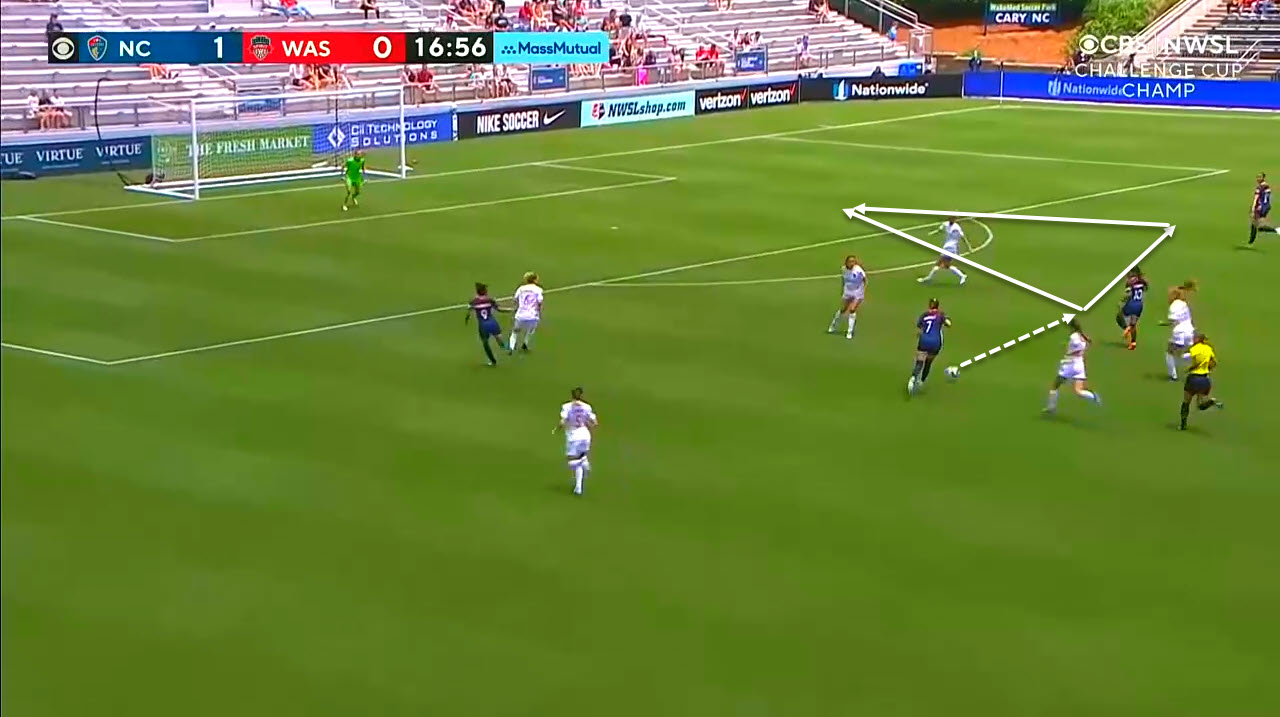 North Carolina Courage’s attacking performance was excellent because the team created numerous goalscoring occasions, they shot 16 times with 6 shots on target as they were often dangerous especially through counterattacks, relying on Debinha’s quick dribbling skills, the two wingers’ penetrations and Kerolin’s physical abilities and off the ball movements. This made North Carolina Courage look dangerous throughout the match and made things more difficult for Washington Spirit who had to be very prudent when circulating the ball in order to avoid possible counterattacks. Moreover, North Carolina Courage were able to add a second goal at the 69th minute thanks to a well-executed corner-kick by Pickett and an own goal from Aylmer, a goal that ended Washington Spirit’s hopes of a comeback after they were 1-1.

Washington Spirit had the chance to start the game in the best of ways but opted for not doing so and that’s because they had a big goalscoring chance at the 9th minute when Sanchez initiated a counter-attack and advanced until reaching the final third to serve Rodman on the right-wing. The latter saw Hatch escaping from her marker and moving towards the goal and immediately gave her a through pass, yet, Hatch’s finishing was surprisingly poor. The team’s striker could have easily dealt with the ball in a much more decisive and determined way than that in order to ensure the ball goes towards the net by using the right amount of power and precision, which lacked Hatch’s shot. Washington Spirit do surely regret not exploiting this big chance in the best of ways because this was one of the team’s 5 shots on target in this match, including the equalising goals. 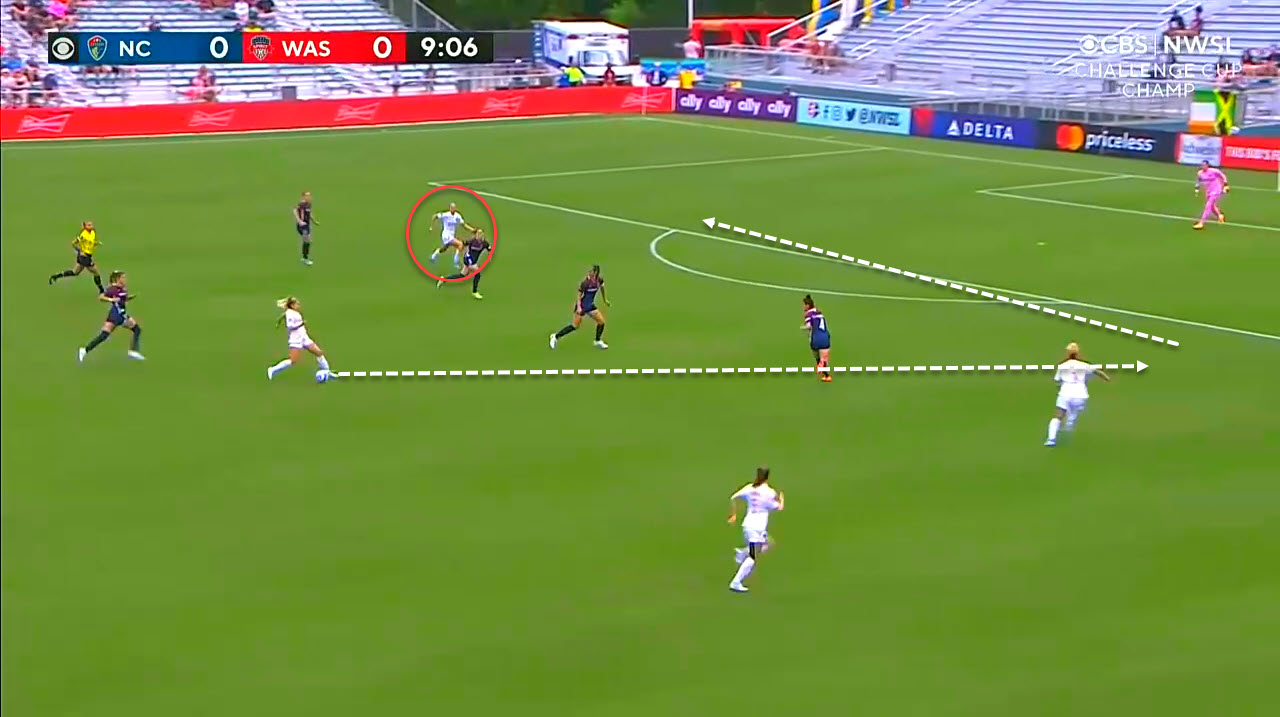 In fact, just like North Carolina Courage rely on Debinha a lot in the attacking phase thanks to her excellent skills with and without the ball, the same thing applies to Sanchez for Washington Spirit since this player was at the heart of almost all her teams’ attacking actions. She is the playmaker who provides most key passes in the final third. But unfortunately for her and for the team in general, the finishing was not on point in this match not only from Hatch but also from Rodman.

For instance, in this action, Sanchez advanced with the ball and saw Rodman waiting for the ball in a perfect shooting position. Sanchez provided her with an excellent cross but Rodman’s control and finishing was not good enough to beat the keeper. 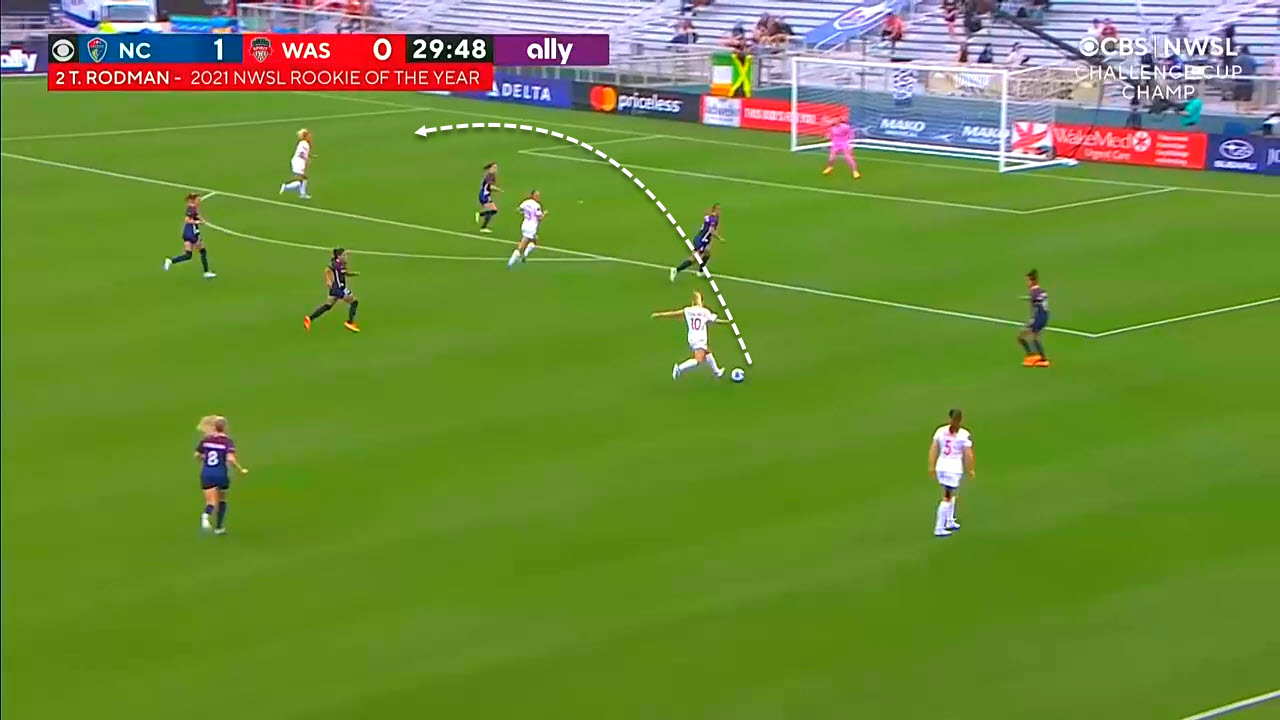 The only time in which Washington Spirit were able to finish the action with success was during their equalising goal action. The opportunity was created thanks to an excellent through pass from Rodman towards the free space ahead of Hatch and her markers. Hatch however was quicker than her opponents in terms of reaction and ran towards the ball ahead of them in order to reach it and put the ball inside the net with a first time shot that was precise and well-angled this time. 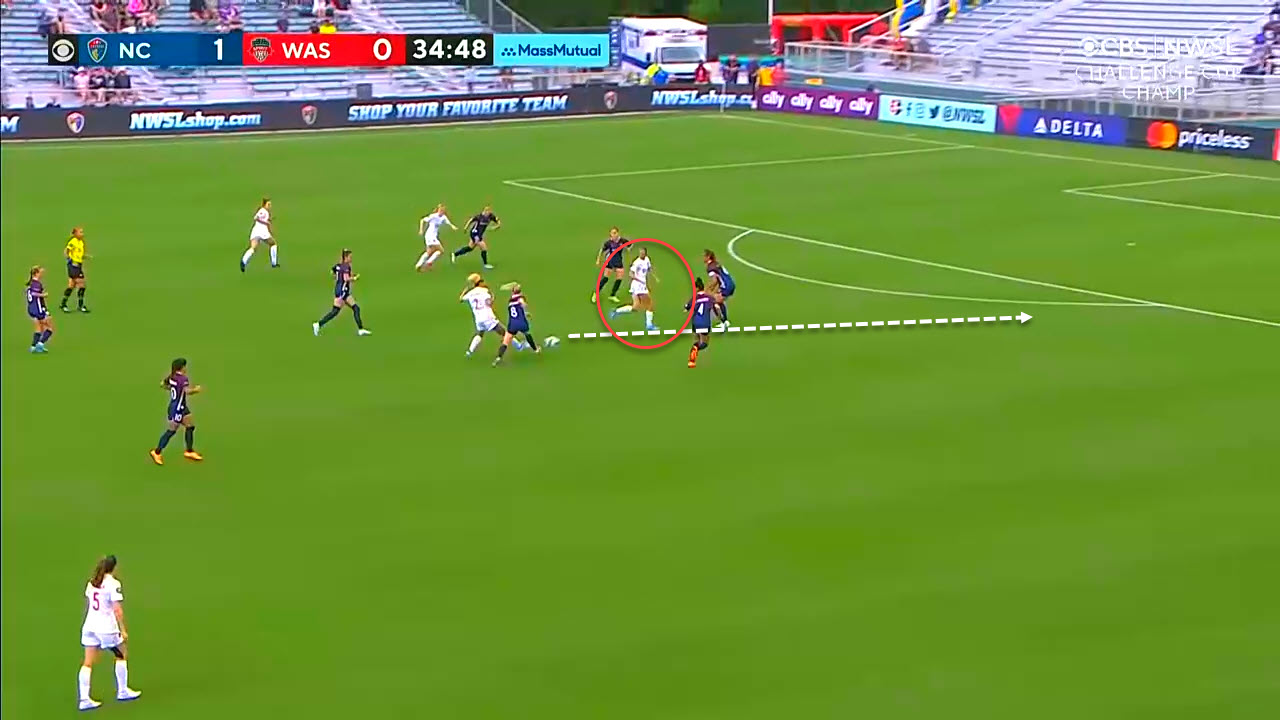 Unfortunately for Washington Spirit, the team paid the price for the mistakes made in passing and in losing possession. Moreover, they did not react as necessary to the counterattacks created against them and showed little organisation in defence during those actions, which cost them two goals. Therefore, Washington Spirit will have to improve this defensive aspect and allow fewer counterattacks per match in order to reduce the number of dangerous opportunities. Also, it is necessary to work on reacting quickly to those counters by retreating as quick as possible and blocking the key opposing players before they reach the final third. In these cases, even a tactical foul can save the team from a possible goalscoring chance. Washington Spirit’s concentration in front of goal should be improved as well ahead of the NWSL in order to concretise the created chances. Knowing that the team has some quality attacking players who showed their goalscoring abilities, it is fundamental that they keep improving their finishing skills and aim at reducing the number of missed chances in order to increase their winning chances per match. Nowadays, teams like Barcelona, Chelsea, Arsenal, PSG, Lyon and others are successful mainly because they work a lot on improving their finishing abilities regularly apart from concentrating on playmaking and on having a solid and organised defence.

This win will surely make North Carolina Courage a much more confident team as it will enable them to start the NWSL season with high hopes. At the same time, this doesn’t mean that they don’t need improvements. North Carolina Courage must work continuously on improving their defensive organisation in order to concede fewer goals while innovating their attacking ideas to not become predictable to their opponents.

On the other hand, Washington Spirit should be proud of reaching the NWSL Challenge Cup final and take the best out of this experience to use it in their advantage during the NWSL season. And anyways, this loss will only make the team learn from their mistakes and hopefully avoid repeating such mistakes in the course of this season.