Juventus will finish the season without a trophy for the first time in more than a decade as they got defeated by Inter in the Coppa Italia final after a match full of events that many would consider “controversial”.

After finishing in a 2-2 draw, the winner had to be decided in the extra time, where Ivan Perišić’s efforts were awarded, and he gave Inter the advantage which resulted in their triumph.

Both teams had the initiative in different periods of the game, but Inter’s tactical clarity helped them perform better despite Massimiliano Allegri’s change of approach in the beginning of the second half. After an unproductive first half, the Bianconeri had a boost in their performance as the manager switched the formation by replacing Danilo for Alvaro Morata early on.

That helped them achieve a complete turnover, but they only managed to keep up until the 80th minute when Hakan Çalhanoğlu equalized with a perfectly executed penalty.

While Juventus are out of the Serie A title competition, Inter have now boosted their confidence for the final two rounds where they need a full package of six points to have a chance against the leaders Milan.

This tactical analysis explains the key tactical moments in the Coppa Italia final and examines why Juventus’ change of tactics wasn’t enough for them to win.

Initially, Allegri set his team up in their usual 4-4-2 with Mattia Perin on the goal again and a four-man defensive line consisting of Alex Sandro, Giorgio Chiellini, Matthijs de Ligt and Danilo. Juventus’ central midfield was dictated by Adrien Rabiot and Denis Zakaria, while Federico Bernardeschi and Juan Cuadrado were operating on the flanks. Paulo Dybala and Dušan Vlahović formed the forward line.

The Bianconeri had some difficulties in the first half, as Inter had more of the possession and could freely build up thanks to the increased spaces and lack of connection between Juve’s lines. There were moments when the Nerrazzuri had too much time and space to make a quick transition and reach the final third.

Danilo got injured in the 40th minute and was forced off, which was a chance for Allegri to switch the tactics up and increase their productivity upfront. He introduced Alvaro Morata which immediately changed the formation to 4-2-3-1, with Cuadrado dropping back in defence and Bernardeschi moving on the right flank to allow Morata space on the left.

This immediately increased the team’s efficiency upfront as they started overloading the opposition half to create combinations. Once the team gained the advantage, typically for Allegri, he instructed the team to defend which resulted in switching to more of a 5-4-1 formation.

Simone Inzaghi stuck to his favoured 3-5-2 with Samir Handanovič covering the goal and Milan Škriniar,

Stefan de Vrij and Danilo D’Ambrosio forming the back three. Çalhanoğlu, Marcelo Brozović and Nicolò Barella strolled in central midfield, being flanged by Perišić and Matteo Darmian. Brozović proved crucial in transitions again, as he was his 94% pass completion rate was key for Inter’s build-up play and also for releasing pressure. Perišić provided massive support to these actions and was a key figure in the Nerrazzuri’s attacking ventures as he exposed the opposition on a few occasions through his dribbling and crossing. The front line consisted of Lautaro Martínez and Edin Džeko.

Most of the team’s defensive struggles came from D’Ambrosio who often failed to drop back in a timely manner and had difficulties in blocking Juventus’ constant efforts on the left. 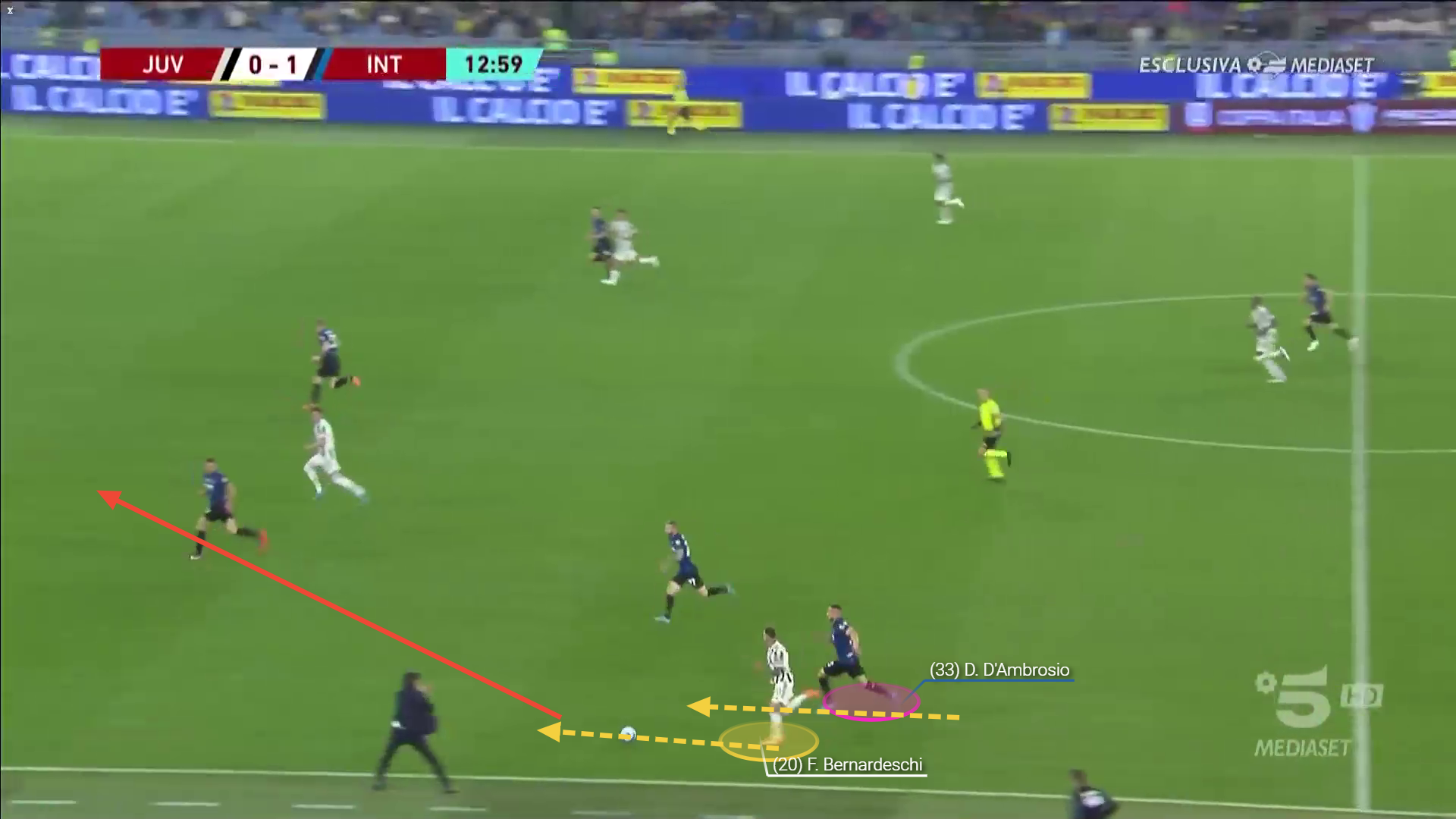 Once Bernardeschi had the ball it was difficult for D’Ambrosio to reach the right pace to stop him.After going 2-1 down at the beginning of the second half, Inzaghi introduced a couple of players to switch things up defensively and bring back the balance but also tried to increase the threat in front of the goal by replacing Džeko with Joaquín Correa.

Brozović has proved to be crucial for Inter in the last few years as he is the player that orchestrates play and provides both more options in possession and more stability defensively. His defensive midfield position doesn’t limit his movement and as underlined in the game against Juventus, his involvement in ball retention and ball progression was key for the team to achieve 58.88% of possession.

His lateral passing helped the team in releasing pressure while moving away from the goal as he rarely sends the ball back, trying to maintain a more advanced position and allow the team to move forward. Only 11/102 of his passes were back passes, which underlines his ability to provide options for the team and to increase their creativity in possession, without inviting pressure to Inter’s defensive third and increasing the pressure on the defenders.

His ability to spread out and switch play helped the team in escaping overloads as his free-roaming position gave him the chance to support the ball progression from different areas. His movement to the edge of the final third helped the team exploit the spaces between Juventus’ lines and his pass combinations with Barella and Çalhanoğlu increased the team’s creativity upfront.

His defensive awareness was also increased, and he managed to stop quite a few of Juventus’ attacks through his ball recovery efforts. Seven out of his 12 recoveries were in the opposition half, showing his importance in Inter’s pressing strategy and ability to stop the opposition attacks early on.

Juventus’ struggles and the Plan B

Juventus struggled to find their tempo in the first half and the spaces between the lines during defensive transitions allowed Inter to easily reach the final third. They weren’t efficient enough in their direct challenges and the outcome of the opposition attacks would often be decided by 1vs1 situations. Defensively, they were most successful in intercepting the ball on the left through a collective effort of Chiellini, Rabiot and Zakaria. Contrary to that, they had difficulties in blocking Inter’s attacks on the left.

Things in attack didn’t look much different. They did manage to expose Inter’s three-man defence on a couple of occasions, but the poor finishing combined with some key Handanovič involvements kept them away from scoring. They failed in their positioning in the advanced areas and had difficulties in exploiting spaces. Most of their six shots in the first half came after set-pieces.

The change in Bianconeri’s tactics came with the replacement of Danilo with Morata at the end of the first half. As explained, this changed the dynamics and provided more options upfront, allowing the team to create overloads in certain areas and exploit spaces better. It also resulted in an overall better coverage which affected their press and defensive positioning. Once the team settled and had more time in the opposition half, it immediately helped them in creating more opportunities in front of the goal, which respectively led to their two goals.

Instead of trying to control the game and continue to overload the advanced areas, Allegri stayed true to his usual tactics and dropped the team back in defence, switching temporarily to a 5-4-1 after introducing Leonardo Bonucci. Inter took advantage of Juventus’ deeper position and earned more time in the opposition half, producing five shots in ten minutes pressurizing the opposition to a point where they started to make individual mistakes.

Once the Bianconeri conceded a penalty for 2-2 it was difficult for them to get out of defence and create any quality chances.

Ivan Perišić was one of the biggest threats in Inter’s attack as he wasn’t only crucial for ball progression through his movement on the flank but would also constantly supply his teammates with crosses and even occupy the box to provide a direct threat.

The Croatian’s movement on the flanks provided width and allowed the team to exploit the opposition through the wide areas, where Danilo, Cuadrado and later Bernardeschi couldn’t block his ball progression efforts as dribbling attempts often left them behind. His positioning was also crucial for the team’s ball retention as he constantly provided a passing option and often combined with his teammates. 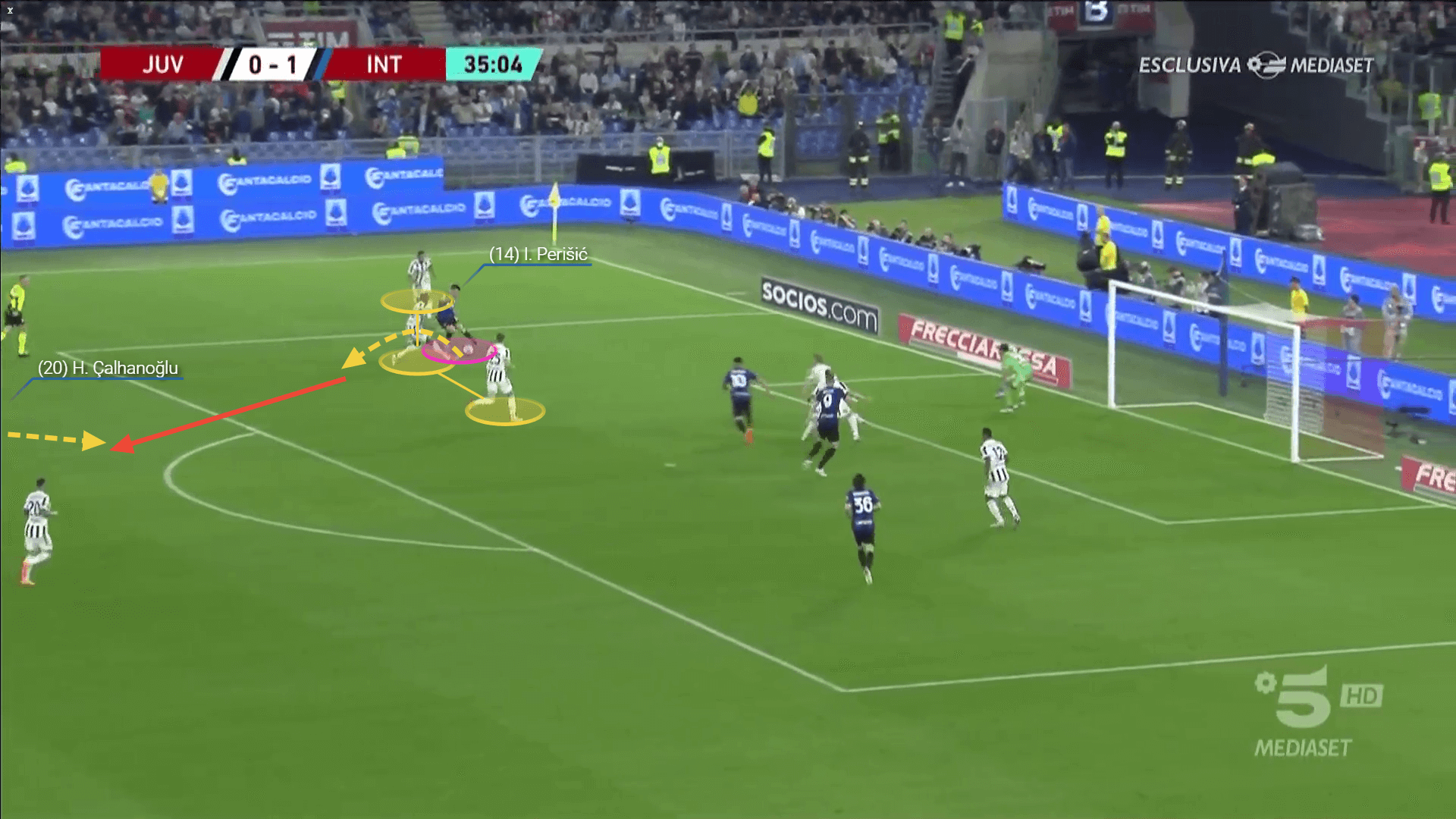 Then gets surrounded by four opposing players but his strong work under pressure resulted in dribbling past them and even making a key pass to Calhanoglu.He dribbled past the opposing players six times, which gave him the opportunity to deliver the ball deep in the opposition half and to the box, threatening Juve’s goal on multiple occasions. Whenever he was not trying to enter the penalty area, he was supplying his teammates with crosses, finishing the game with 8/12 accurate crossing attempts, which underlines his willingness to expose the opposition and to set his teammates up in goalscoring positions.

Perišić’s defensive impact also shouldn’t be underestimated. He helped the team avoid quite a few dangerous situations, by contributing actively even in their defensive third. He was also efficient in the air, which provided additional support and allowed Inter more time on the ball.

He recovered the ball six times in the advanced areas and troubled Juventus’ build-up from the back, giving his team the opportunity to counteract and expose them. He was responsible for Inter’s two goals in the ET but his overall impact on their actions both in and out of possession was what made him an irreplaceable figure for the whole 120 minutes.

Inter took advantage of their opportunities and as our analysis showed they relied on a settled approach and players’ experience to achieve what they wanted. While Allegri’s change of approach midgame sounded like a good idea, his inability to maintain the higher tempo and continue with the more attacking movement made it difficult for them to keep their advantage and win the game.