Hamed Traore scout report: How the 22-year-old’s performance had an immediate impact on Sassuolo’s attack

Sassuolo started to get back on track lately after an inconsistent performance in the first half of the Serie A season. They have achieved five victories in their last eight games and while that was a result of the team’s efforts, one of the players impressed and had a huge contribution to their success.

The 22-year-old Hamed Traorè, who just recently earned some regular playing time, was brought under the radar with his mature displays and attacking flair, which helped the team in front of the goal. The head coach Alessio Dionisi steadily increased his playing time, from introducing him as a substitution to giving him a spot in the starting XI and the youngster doesn’t take this opportunity for granted.

Traorè supports the team’s actions from the left attacking midfield position in Sassuolo’s most used 4-2-3-1 formation, although his impact is the most noticeable centrally. His positioning and technical abilities have allowed him to score six goals in the team’s last eight league games, scoring a brace in their 2-1 win over Atalanta.

The Ivorian didn’t shy away to make an impact in the games against the top six sides, scoring against Lazio and Roma and providing an assist against Inter. He also scored Sassuolo’s only goal in the Coppa Italia quarterfinals against Juventus.

This scout report includes a tactical analysis of Traorè’s abilities on and off the ball and explains how he fits the team’s tactics.

Traorè’s biggest contribution is in the final third where he can create goalscoring opportunities, but he does also support ball progression and Sassuolo’s actions in possession. This has changed over the years as he had to fit into Roberto De Zerbi’s possession-based playing style when he arrived on loan in 2019. Despite the former Sassuolo coach assigning him a less possession-oriented role, based on his abilities, the player did develop some positive traits in terms of ball progression.

He became more reliable for retaining possession for longer periods due to his dribbling abilities and he could easily be used to release pressure through link-up-play and one-touch combinations that help his team to advance the ball. Sassuolo rely on the players’ dribbling skills to progress the ball. Traorè manages to successfully replace Jeremie Boga, who was dominating in the left-sided areas prior to his departure.

He most frequently combines with the left-back and the left central midfielder as they try to progress the ball through a lot of movement and short passing. He does also combine with Domenico Berardi on the other side due to his movement centrally.

He also frequently combines with Maxime Lopez who has a more of a defensive midfielder role and is the main passing outlet. His passing range allows the team in breaking through the opposition’s pressing structures and as he combines with his more advanced teammates like Traorè in their efforts to progress the ball. The 22-year-old fits well Sassuolo’s strategy to quickly move off the ball and open the passing lanes.

His 3.5 progressive runs on average per game also often help the team to quickly deliver the ball to the final third and provides time for his teammates to move into move advanced positions and overload the opposition half.

The team’s tendency to dominate possession and dictate the play gives them the chance to time their attacking movement well and expose the opposition successfully through smart positioning.

His immediate impact in the final third

Once the 22-year-old got more playing time and was able to settle, he had an immediate impact in front of the goal and is starting to show a glimpse of his potential. Traorè’s strong positional sense helps him to provide a direct threat as he constantly cuts inside and occupies the half-spaces and the box which allows him to move into quality positions.

He provides support both in the wide areas and centrally and tries to help in ball retention through his dribbling skills, which often give the team an advantage as he manages to take on defenders and carry the ball deeper in the opposition half. His 7.17 dribbling attempts per 90 allow him to break through defences and exploit spaces, which often results in him being in a great position to shoot. His 2.14 shooting attempts on average per game have helped the team improve in possession and have increased their attacking numbers in 2022, once he started getting regular playing time.

Traorè’s attempts at the goal are a result of his positional and spatial awareness. His 2021/22 shot map also underlines the efficiency of his movement, as half of his attempts on the goal have either been on target or have been converted into goals. When in possession, the team try to overload the final third with the aim to drag defenders out of position and have more option to finish the attacks. That’s where Traorè’s positioning comes in handy as he is often able to take advantage of second balls and move on the defenders’ blindside.

Even if he is not in a good position to shoot, he would frequently engage defenders and try to set his teammates up into quality positions so they can create opportunities. The Ivorian tends to do layoffs to support his teammates’ movement and increase the team’s efficiency in attack. He has now assisted four goals thanks to his spatial awareness and link-up-play abilities. While his pass completion rate could take some improvement, he does constantly try to supply the ball to the final third and combine with his teammates.

Whenever the opposition blocks the passing lanes and structure well defensively, Sassuolo seek other solutions. That’s when the presence of Traorè is crucial as the team need creativity and strong movement to employ positional interchanges and disposition the opposing players.

His presence in the advanced areas has helped the team increase their average shots attempts per 90 from 13.65 by Christmas to 14.66 shots at the time of writing. Sassuolo do not rely on a high frequency of crossing attempts in attack. Instead, they have adjusted their strategy to the players’ abilities and rely on the full-backs to occasionally cross the ball, while the wide players like Traorè and Berardi prefer to cut inside and provide a direct threat. 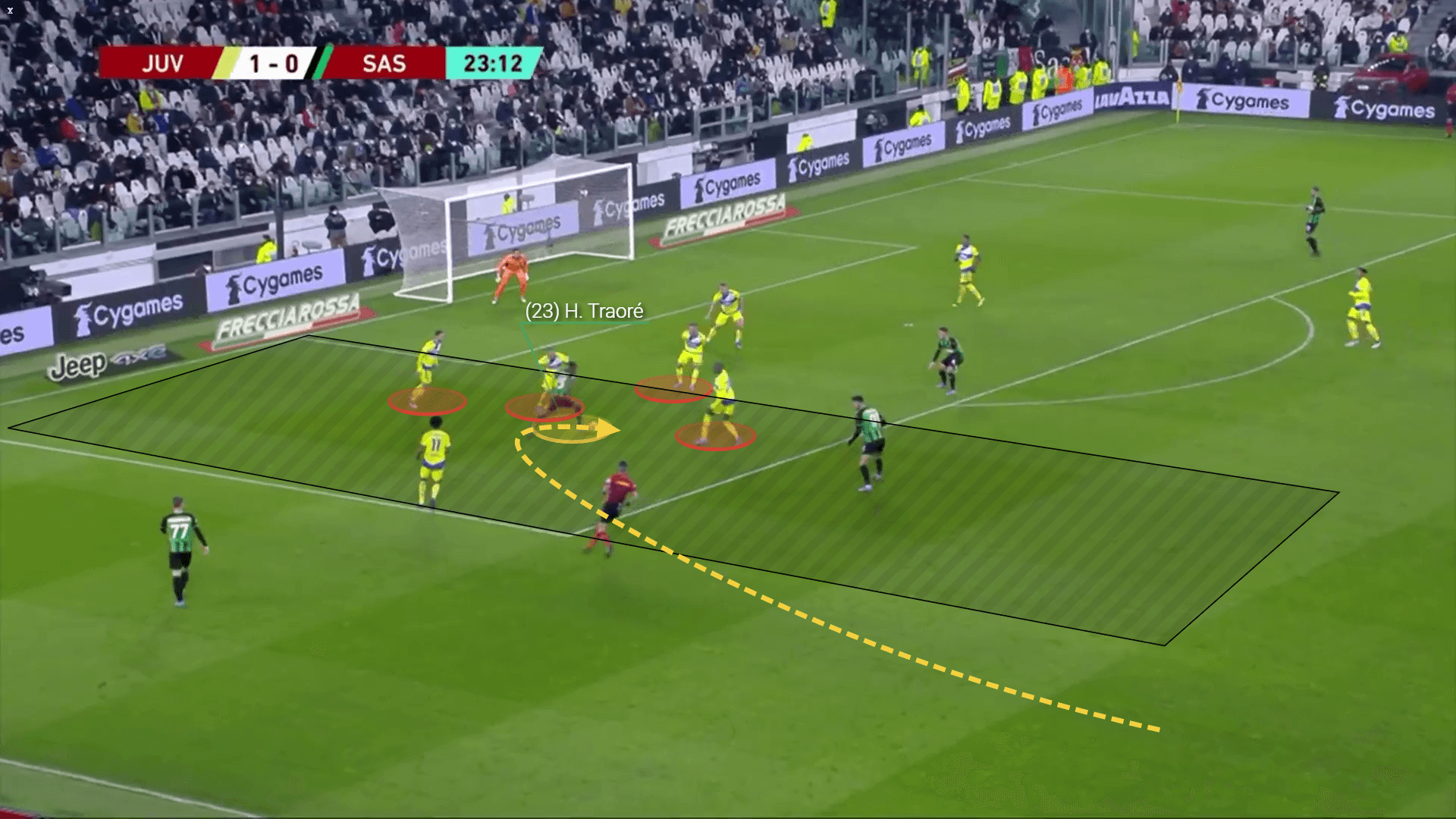 In this situation he moves into the left half-space and dribbles past a few opposing players to shoot.His pace and strong positioning also give the team an advantage in their counter-attacking actions. Sassuolo execute 2.63 counter-attacks on average per 90 and he turns out crucial in the last phases, as thanks to him, many of the counters end with a shot. 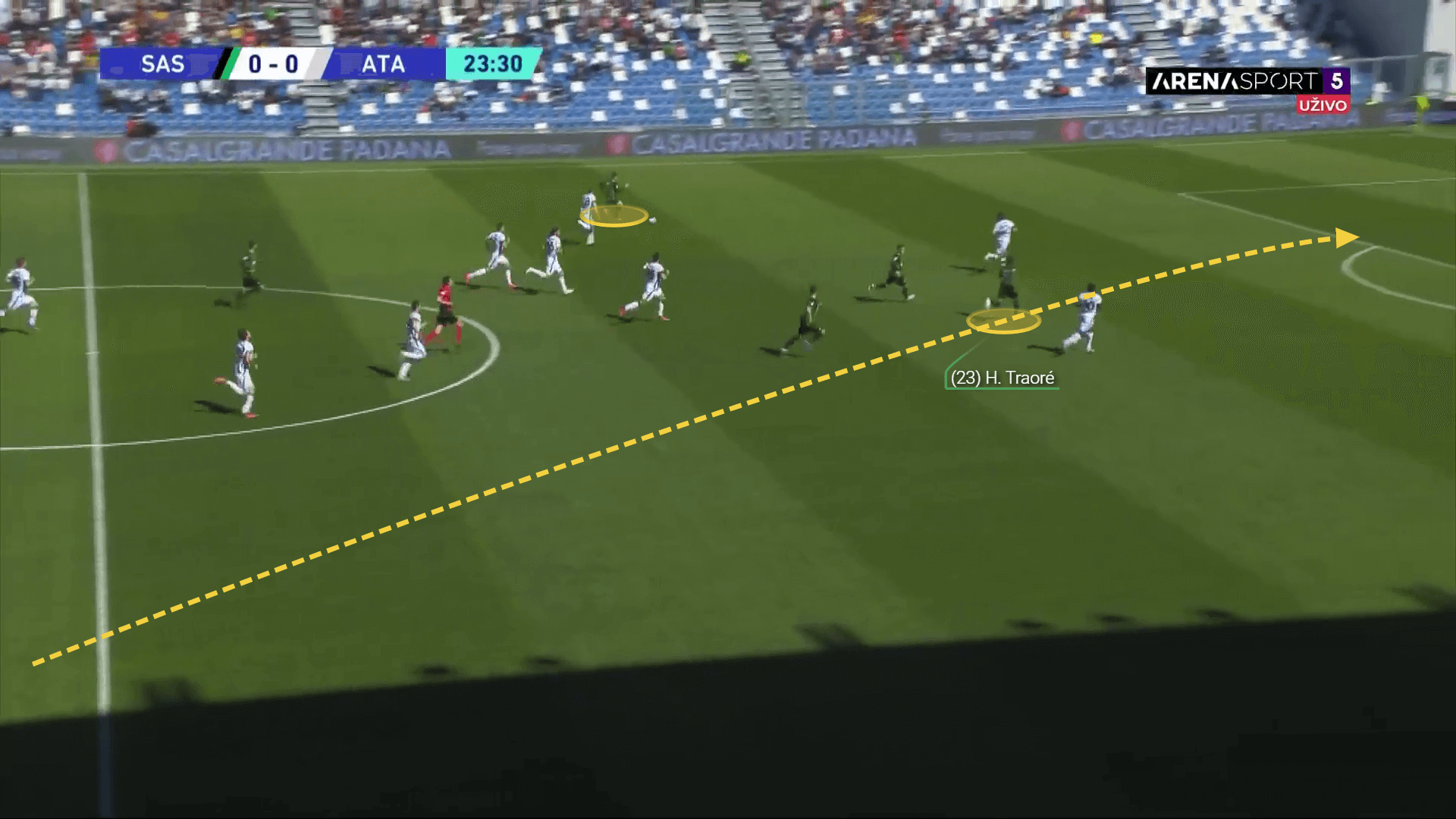 He then made a run off the ball to move into the box and eventually scored.

Despite all of his attacking responsibilities, Traorè frequently drops back to support his team defensively. He contributes with 4.06 recoveries per 90, which are most frequently done on the flank where he often drops to provide more security and cover depth if needed. As his 2021/22 heatmap underlines, the 22-year-old can often be found behind the central line, which of course is a result of both his defensive and offensive responsibilities.

He is rather successful in his direct challenges, considering the frequency of his actions and his advanced role. Traorè wins 54.78% of his defensive duels, which is a great support to the team out of possession.

He does have some flaws, though, as he commits fouls rather often which can give Sassuolo’s opponents an advantage, although luckily most of his mishaps happen away from the team’s defensive third and don’t threaten the goal.

As our analysis shows, Traorè has the needed qualities to become a key figure for the Neroverdi. His dribbling abilities, positional sense and strong finishing have had an immediate impact on Sassuolo’s attacking performance and it seems like the team have found a great replacement for Boga, who was one of their best performance before he left for Atalanta. The 22-year-old could easily develop into a player who may fall under the radar of the Italian top teams like Milan, Inter, Juventus and Napoli.