Despite the impressive season, Napoli are slowly moving away from their dream to win the Serie A title. The team are currently four points behind Milan, who still manage to keep the leadership, although Inter are following them tightly and have a game advantage.

That doesn’t mean that Luciano Spalletti and his squad don’t deserve praise for their performance. One of the players that have contributed greatly to their title challenge hopes is the midfielder André-Frank Zambo Anguissa who is crucial in the central areas and helps the team achieve a balance between the lines and succeed both in and out of possession.

Despite being employed in the right central midfield position, the combination of high defensive awareness and strong technical abilities makes him successful in the defensive midfield role.

His passing ability helps the team in retaining possession and in ball progression, while his anticipation skills and defensive actions provide additional stability off the ball.

In this scout report, we use tactical analysis to explain how the Fulham loanee adds to Napoli’s performance and how he fits Spalletti’s tactics.

Spalletti has developed quite a distinguished playing style at Napoli. His possession-based approach combines a high pass frequency with a lot of movement. They average 532.3 passes per 90 which places them second in the league in terms of frequency.

Their short passing aims to smoothly progress the ball and occupy the opposition half where they like to control the game. They tend to use the wide areas for their attacking movement where the central midfielders have an important contribution. The team create high numbers of goalscoring chances, taking advantage of their set-piece opportunities, counter-attacking, and relying on long shots and crosses too.

When it comes to their actions out of possession, the team adjust their pressing strategy depending on the opposition. Their average PPDA rate is pretty low (12.07), although in some of their games they are more likely to press high. Their usual approach is putting more effort into their midfield positioning and press and trying to recover the ball in the central areas. They average 68.47 recoveries per 90. Supporting their aim to have more of the possession is also their ability to hold on to the ball. Napoli are the side with the fewest ball losses on average and that’s often a result of the players’ dribbling proficiency as they are the most efficient in their dribbling attempts in the league.

When it comes to their direct challenges, Spalletti’s players do win a high percentile of their defensive duels, especially with the help of the midfielders. Napoli have the second-best defensive record in Serie A, having conceded 27 goals in 33 games.

Despite his defensive proficiency, Zambo Anguissa is strategically positioned as an RCM both in the 4-2-3-1 and the 4-3-3 formations, which Spalletti most frequently opts for. This gives him the opportunity to freely roam as a box-to-box midfielder and contribute wherever the team need him. He is able to support the team’s build-up play through his strong passing as Napoli focus their ball progression efforts and attacking actions on the flanks.

His positioning, combined with his high pass completion rate (91.4%) helps the team in opening the passing lanes and bypassing the press as he acts as a passing outlet and often combines with the defenders and even the goalkeeper David Ospina. His agility helps him in receiving the ball between the lines and quickly transitioning it to attack.

Although his most frequent passing links often are the right full-back and the right-winger as they try to advance the ball through the wide areas, he splits his responsibilities well. He orchestrates the play and often combines with his teammates centrally as well. Fabián Ruiz is often his partner in crime as the two exchange passes in efforts to retain possession and support the attacking actions as, despite Zambo Anguissa’s defensive responsibilities, he is the one who moves past the central line. 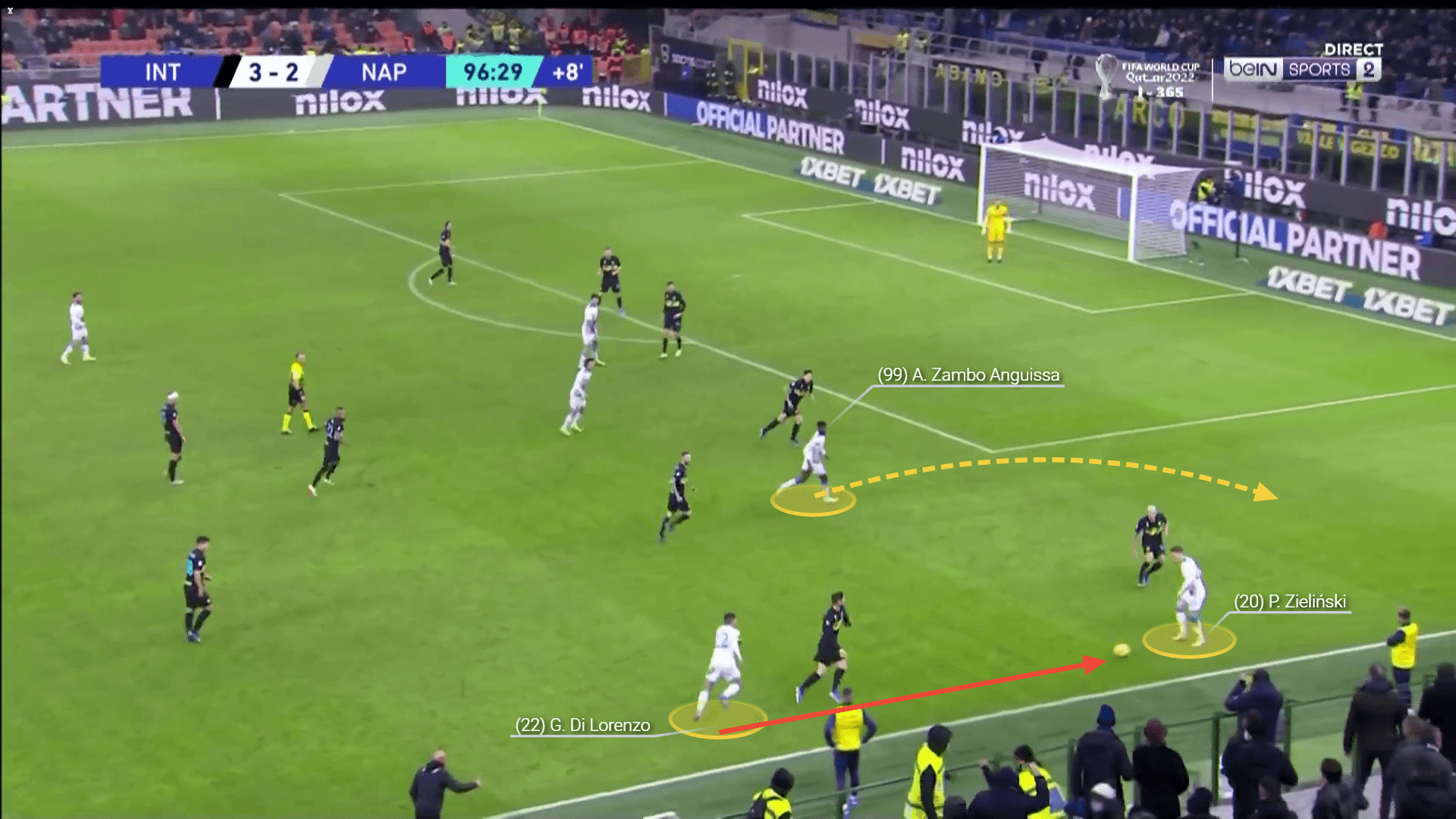 He doesn’t hesitate to move into more advanced position and support the team through passing or stretching the defence.The Cameroonian prefers short passing and supports the team’s possession-based strategy that relies on high pass frequency and sitting in the opposition half. His advanced movement allows him to often deliver the ball to the final third where his attacking teammates can create chances from.

His dribbling abilities also allow him to support ball progression as with his 3.67 dribbling attempts on average per 90 he manages to take on the opposing players and to help the team escape the press. His technical abilities combined with his physicality allow him to get out of difficult situations and overcrowded areas. That underlines his strong work under pressure. 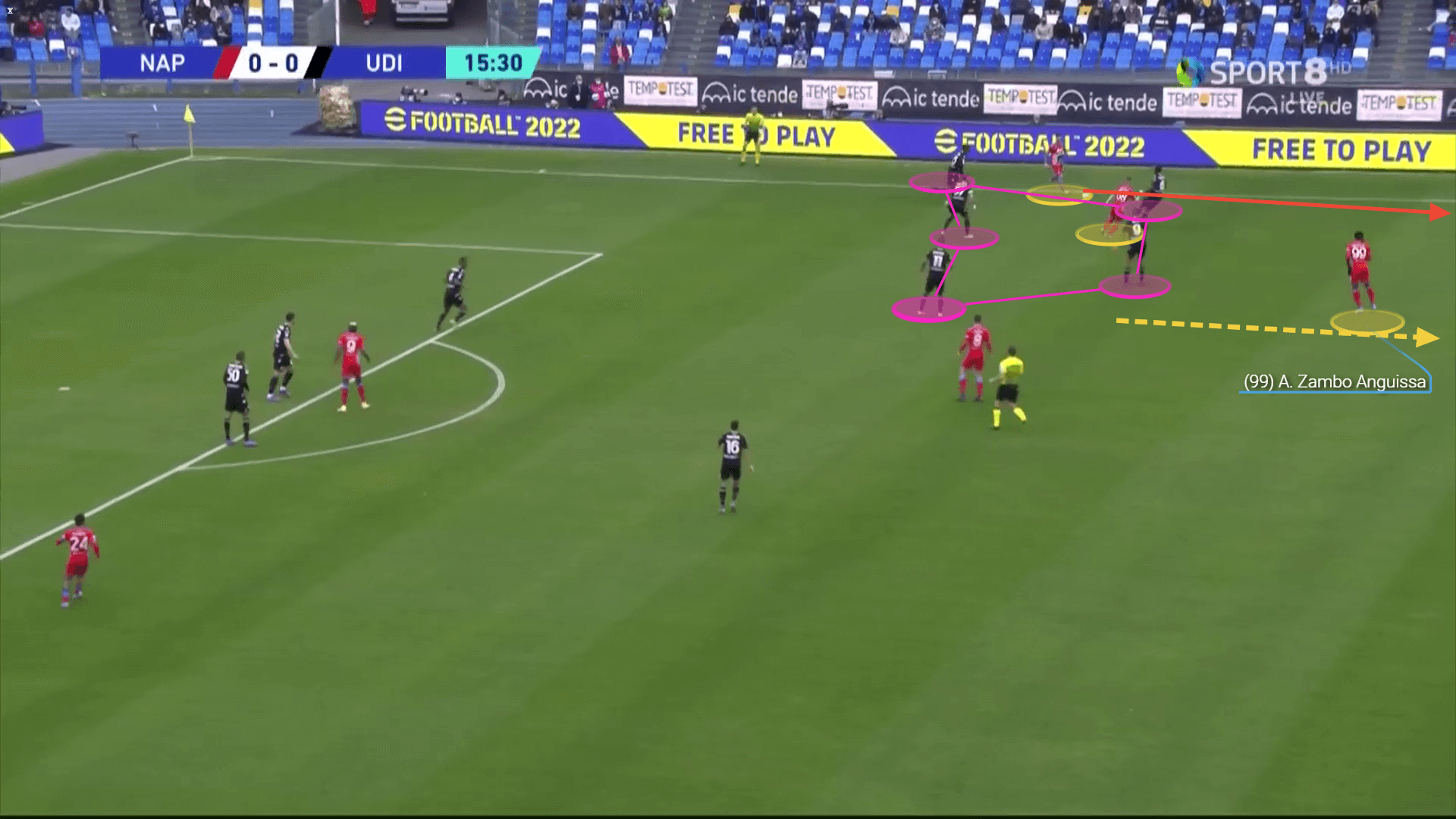 He then saw that the opposition will overcommit to covering the flank and stepped back deeper so he can escape the overcrowded area and open the passing lanes again.

Performance out of possession

Zambo Anguissa’s defensive contribution is equally as important as his actions in possession. Despite often occupying the more advanced areas, the 26-year-old’s defensive awareness is always increased, and he tries to block the oppositions’ efforts to break through the midfield and threaten Napoli’s goal. Not only does his positioning and pressing efforts support the team’s defensive movement but he also dives into direct challenges.

He recovers the ball rather frequently as he uses his body and positioning to press the opposing players. That results in 6.7 recoveries on average per 90 and affects the team’s defensive performance as his actions often stop their opponents in midfield and decrease the risk of exploiting Napoli’s defensive third. He doesn’t hesitate to pressurize the ball carrier and often closes out space, which makes him crucial in defending the flank as he gives blocks the passing lanes and gives the opposing players no chance to progress.

His positioning not only helps in recovering possession but is also crucial for troubling the oppositions’ build-up and blocking the passing lanes. His increased awareness and anticipation skills also help him in intercepting the ball rather frequently which adds to his value out of possession. His 4.73 interceptions on average per game give the team the chance to counter-attack, which they do 2.81 times per game. Overall, his actions increase the team’s time with the ball and respectively affect their average possession percentile.

Apart from his 6.75 defensive duels per 90 he also tends to contribute in the air. With 2.92 aerial attempts, he challenges the opposition and tries to win the ball in key areas. He does lose the ball occasionally, though, which is a result of poor decision making and can sometimes create danger for Napoli as his dribbling attempts are sometimes overdone and result in the opposition stealing the ball.

As our analysis shows, Zambo Anguissa is a great addition to Napoli’s squad and fits Spalletti’s tactics well. The player, though, arrived on loan from Fulham and with their promotion back to the Premier League his future is uncertain. The Napoli director Cristiano Giuntoli confirmed the club’s intentions to sign him permanently but they will have a final decision in the summer.