This tactical analysis looks to highlight some practices that would allow your team to understand how to counter-attack quickly through a low block. In previous coaching articles we have provided an analysis of coaching the key tactics of defending in a low block, and so this session would build on nicely from this topic, allowing them to understand how this tactic can be used to prevent goals, but also create them as well. This article merely outlines examples of practices that could be used and doesn’t suggest copying and pasting these ideas for they may not suit your game model, players or age level, however, hopefully it can prompt some thought and even spurn similar ideas based off of these examples.

Generally in these articles, I would suggest one practice, however, I had two ideas and wanted to share both as alternatives, or even compliments of one another.

Firstly, we want to have our players understand the importance of playing forward quickly and accurately in these moments, allowing them to progress the ball forward securely. Whilst there can be a temptation to hit the long pass, and we don’t necessarily want to strictly discourage this approach, we do want our players to understand that the ball can be moved forward almost as quickly, but certainly more securely, through sequences of quick forward passes. David Moyes’ West Ham side have used this tactic to great effect with some of their goals from counter-attacks this season, and are an excellent team to watch for some real-life examples of this.

Throughout these practices, players should be encouraged to play firm passes and make quick decisions in possession. They should be encouraged to scan before receiving, which will underpin this quick decision making and fast, short passes. They should be asked to receive on whichever foot allows them to play quickest in that momentum and attacking players should be prompted to anticipate turnovers of possession and begin to push forward in transition before the defending team can react. They should also be asked about the benefit of changing the point of attack when countering, seeing that playing down the same side of the pitch possession has been won in is likely to give the defending team a greater chance of being successful in the counter-press.

A positional game, particularly with a simple structure that the players are familiar with, is a good way to initially introduce this. Instead of having a standard transitional positional game where the attackers and defenders essentially swap positions in transition, this practice will be ever so slightly different.

As the image below shows, there are no end neutral players, but instead two goals. However, we do have two neutral players in the centre of the pitch, giving the in possession side a 6v4 overload. The possession team will look to combine passes, and can be given a pass target to reach in order to score a goal. 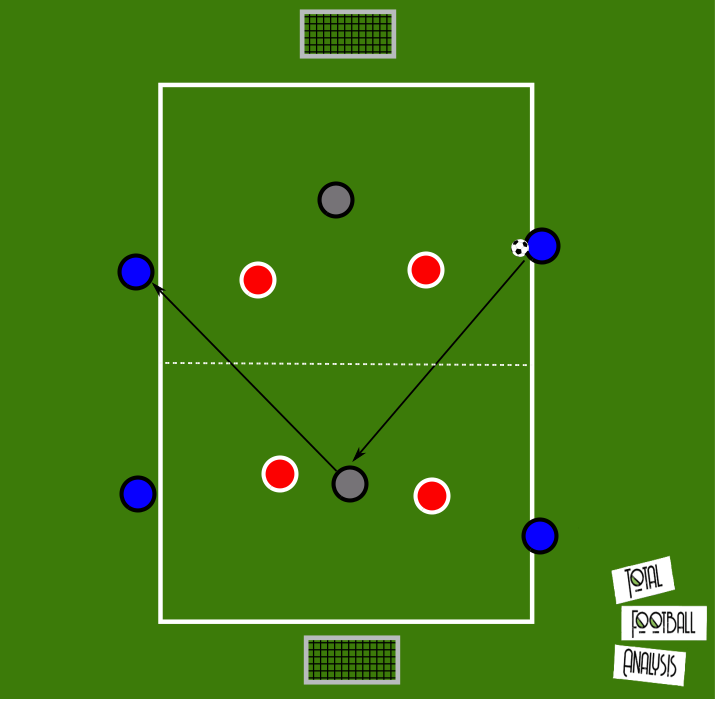 We do want to force turnovers in order to bring out our coaching points, so we force our possession team to have to play the ball inside, and not use simple passes down the line to their teammate on the same side of the grid as them.

As possession is turned over the defending team will look to find a neutral player, receive a pass close to them, representing a third man run, and finish in one of the mini-goals. A goal scored allows the defending team to become the attacking team.

To force the defending team to have to play a more game realistic forward pass, and not just a quick pass two yards away to their closest neutral player, we should ask them to break the halfway line put in place on this grid with their pass. The attacking team, the blues in this case, are allowed to counter-press and, if they prevent the defending team from scoring, they will continue to attack. 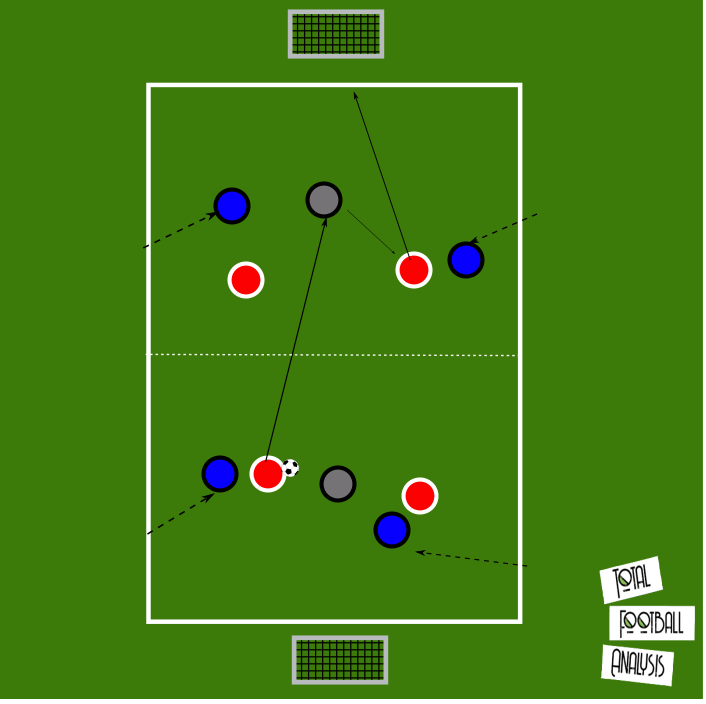 Initially, the attacking team looking to score any way they can in the one goal they are attacking. The thirds can be used to structure the play, where no team can have four players in the same third. This will prevent them from closing the space down too much, and provide a structure for both sides. 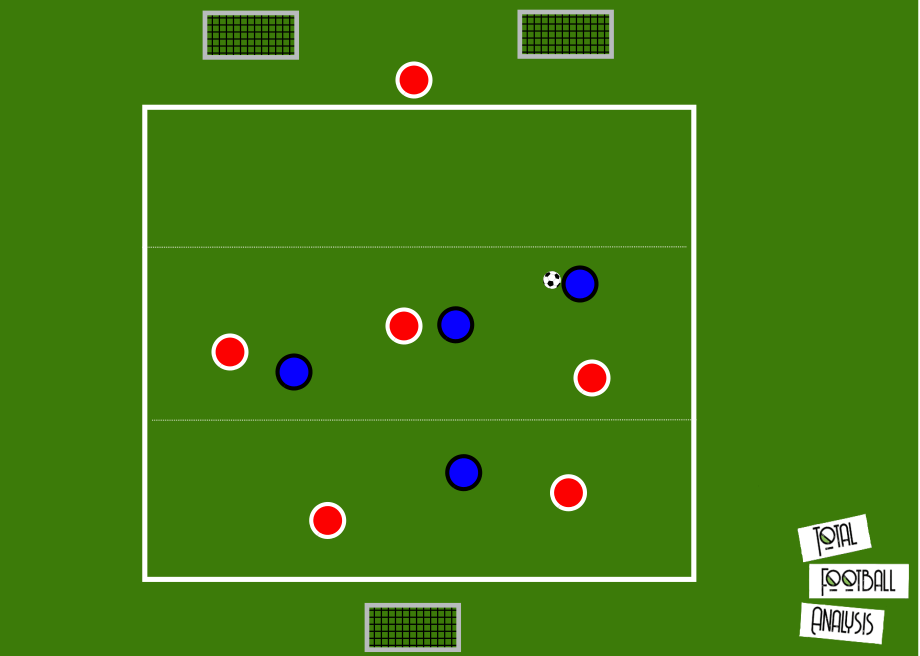 The target player can move across the end line, and when the defending team win the ball they should look to find their target player in order to score a goal. The deepest player, standing in front of the target man, is likely to seek to protect any passes into this player, so the red team in this example, should look to find a short pass into one of their midfielders who can engage this blue defender, before then playing into the target man. 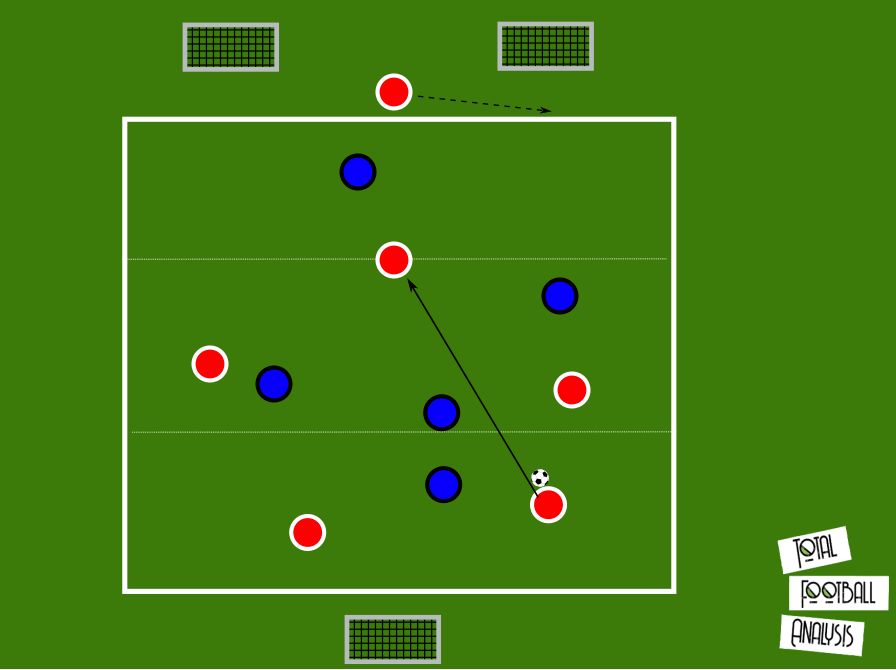 Initially, a pass into the target player can be worth a goal, however, as players begin to get the hang of this practice, a goal should now be scored by finishing in one of the two goals, after a setback from the target man. This will encourage our red team to quickly push forward and support any forward passes in attacking transition. 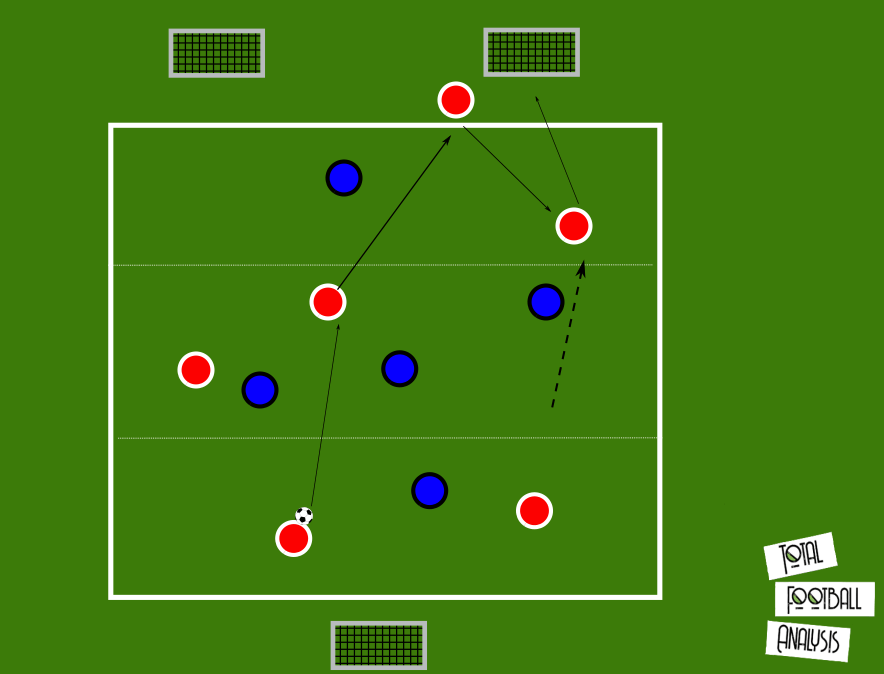 This practice would lead nicely into a more match realistic practice, which would benefit from being positioned in an area of the pitch where this scenario is likely to occur. The pitch can be set up in a way that narrows the space for the attacking team, making it easy for the defence to sit in a low block, and giving them more chance of being successful in turning over possession, whilst providing more space for them to counter-attack into once they win the ball. 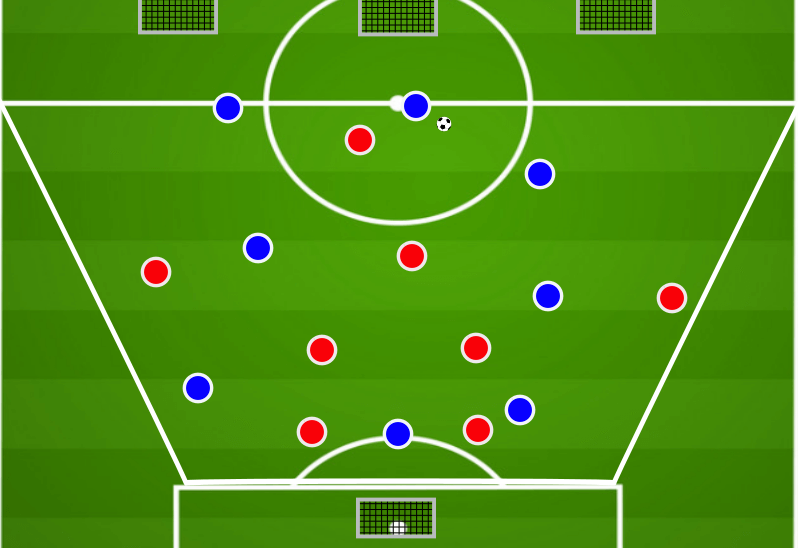 We can see this in action as the red team win possession and through a quick sequence of possession can play their left-winger into space to score from.

The red team should be challenged to not only play forward quickly in this moment but to recognise that it is in their best interest to switch play as they break forward.

In the example shown below, there is clearly little to no space on the right side of the pitch due to the blue team choosing to attack down this side, and so they should look to use their short passes to quickly access the far side. 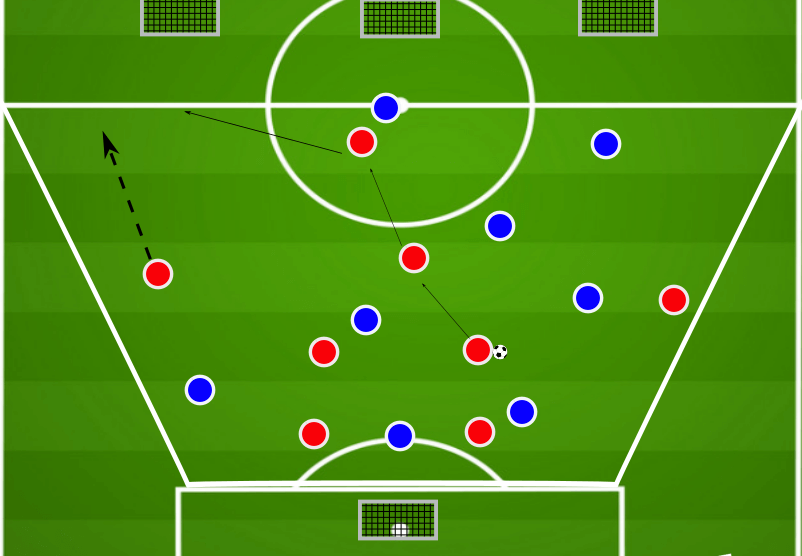 Of course, if they do see the option to immediately break lines and play straight into their centre-forward, then we don’t want to discourage this, however, they should recognise that this is a more difficult pass and as a result is more likely to end in an interception or a misplaced pass. 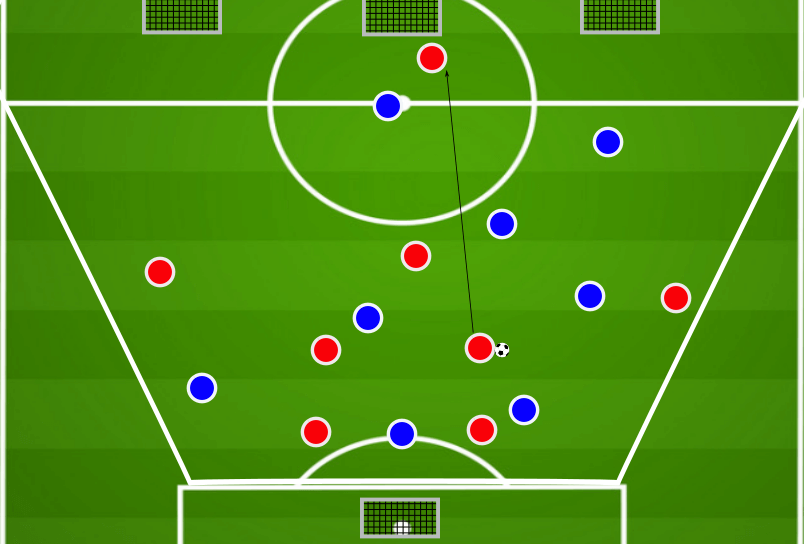 The final practice would be best suited to using a full-size pitch in an 11v11. By playing with the full length of the pitch we obviously increase the amount of space the counter-attacking team have to attack once they win possession. Play should always start with the blue team, and preferably given to them inside the red half, so they are able to immediately begin a “developed” attacking phase and allow the red team to instantly defend in a low block.

Once more the pitch will use the five channels mentioned throughout this set of coaching articles, with our defensive team tasked to stay compact and work within three channels of the ball. 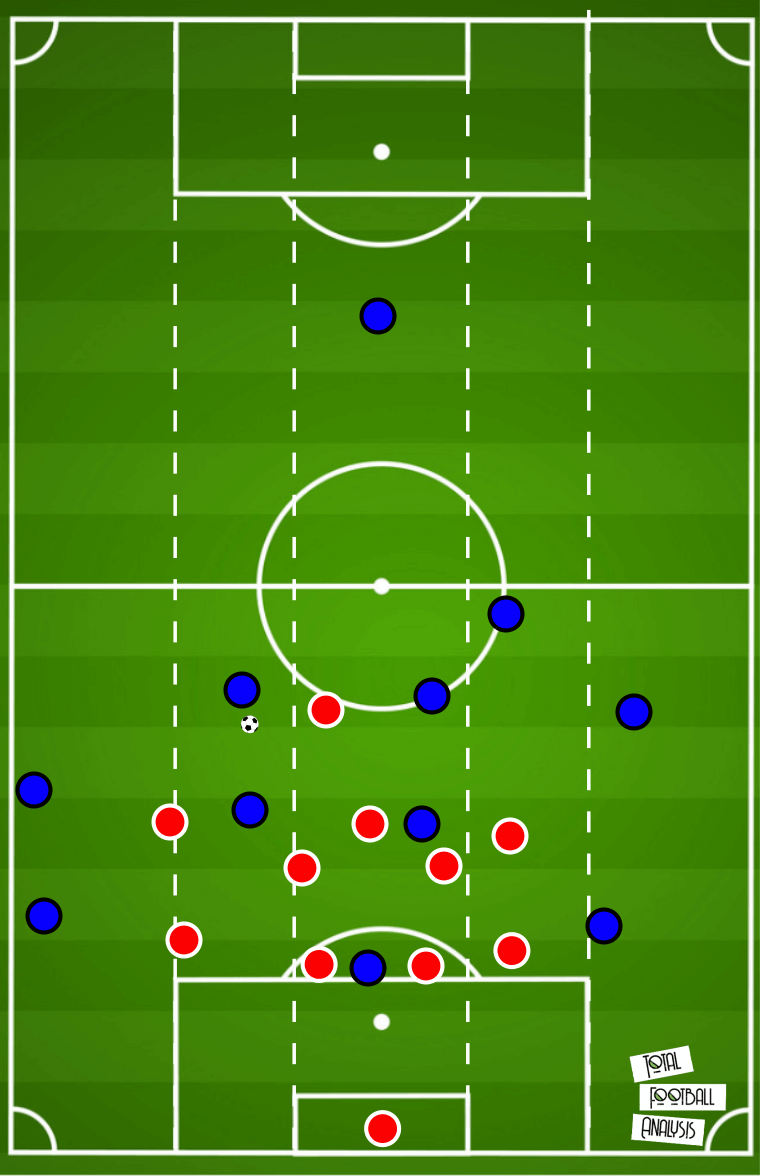 The red team should be given a time limit or a pass limit to score once they win possession. The time limit could be something like 8-10 seconds, or 5-7 passes as a maximum amount before they must score. If they are unable to, the ball can be immediately played into the blue team and they can be allowed to continue their developed attacking phase once more.

The image below shows the red team overturning possession close to their goal. 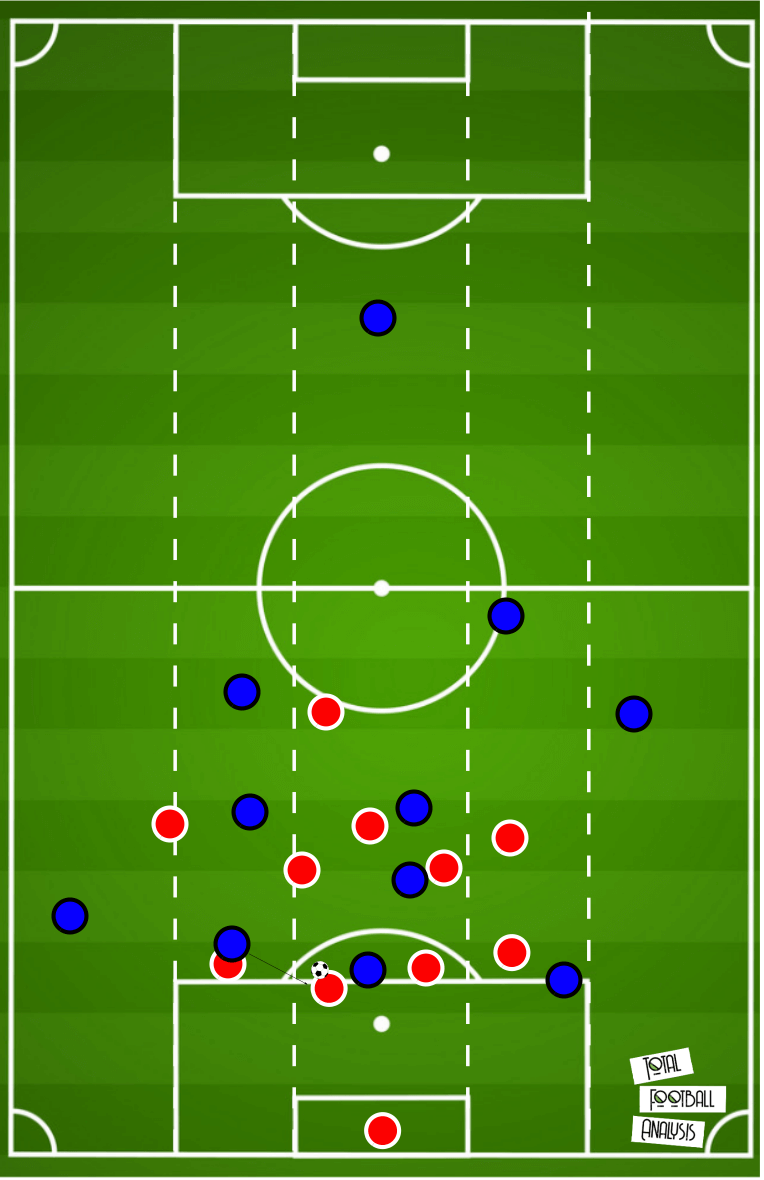 This should be the trigger for our centre-forward and wingers to stretch the pitch vertically. We want them to force the defence to have to drop and to create space in between the opposition midfield and defence which our number 10 can access.

As the defender finds a short forward pass option to one of their midfielders, these aforementioned players should be springing into action. 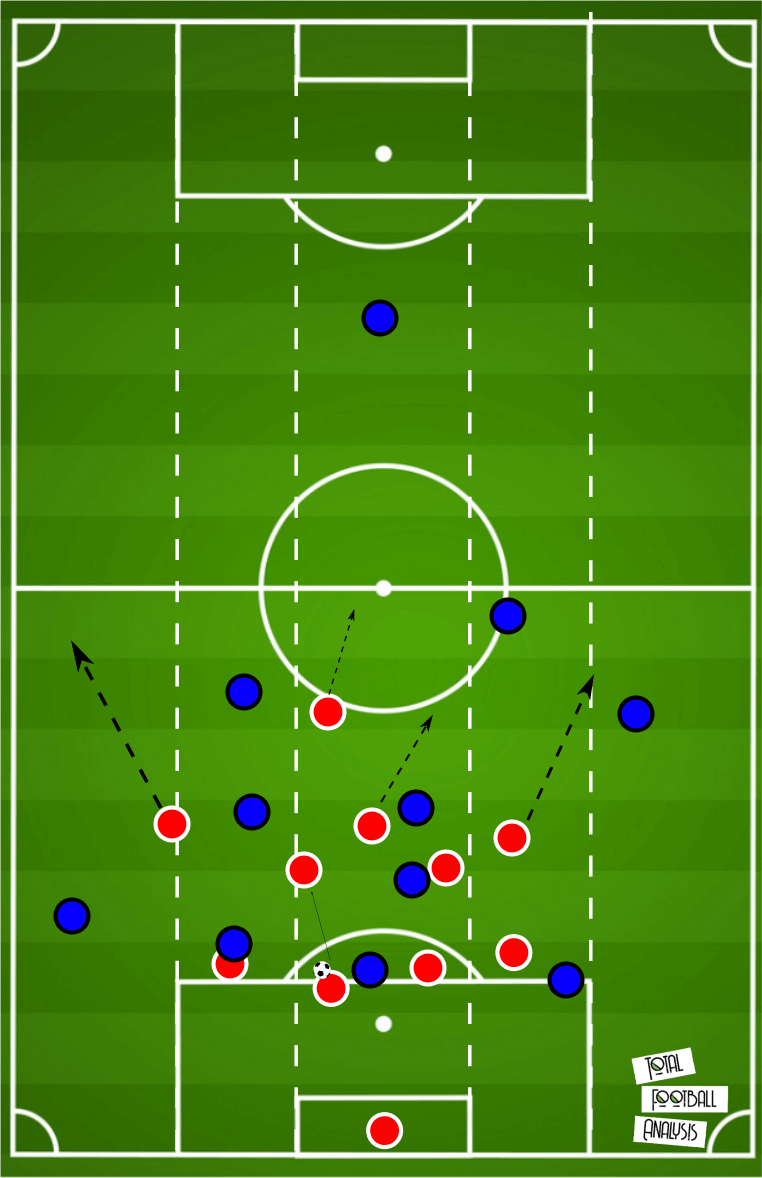 As mentioned, the 10 wants to access the space created by the aggressive forward runs of his attacking teammates, and can be found quickly, within two passes. 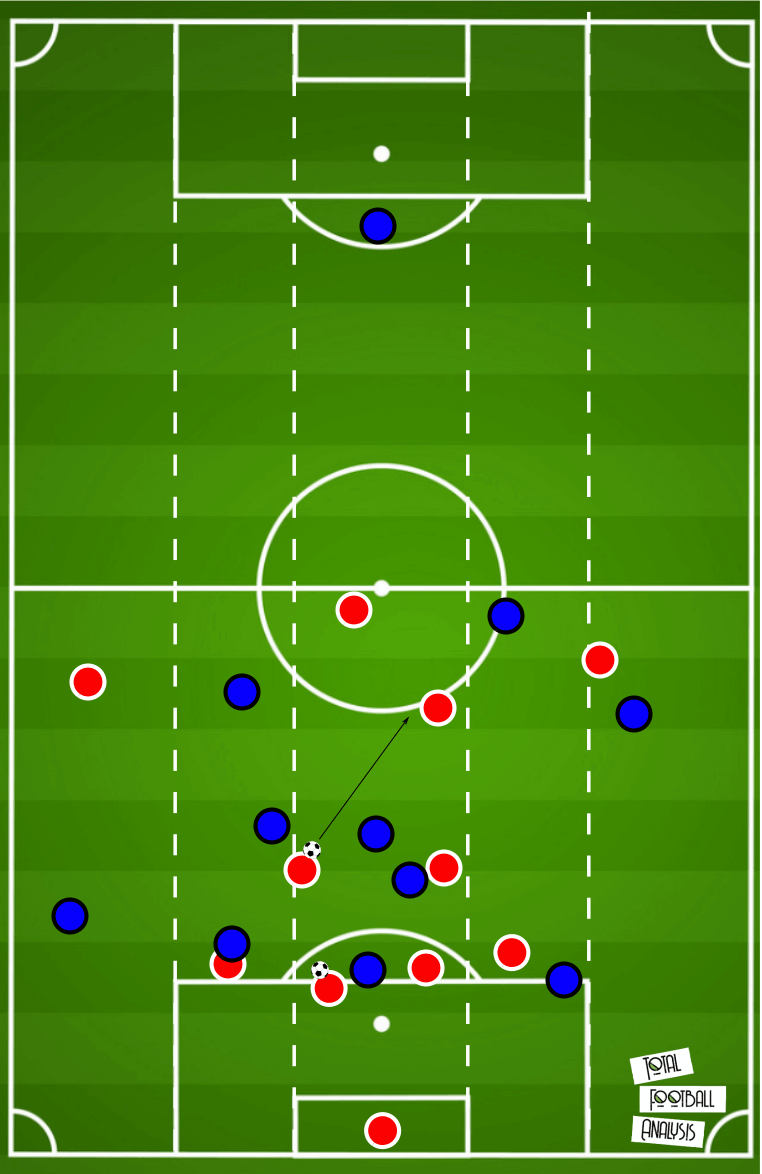 This immediately puts the red team in an overload situation, attacking with a 4v3. If they are unable to continue playing forward then the blue full-backs and central midfielders will recover and prevent them from being able to take advantage of this situation.

We can see the plethora of pass options available to the red team in this moment, and they should be given the freedom to make their own decisions and reflect on the effectiveness of these passes. However, should the ball be won on one side of the pitch, we do still want to encourage them to switch the play as they break forward, and further stretch the blue team. 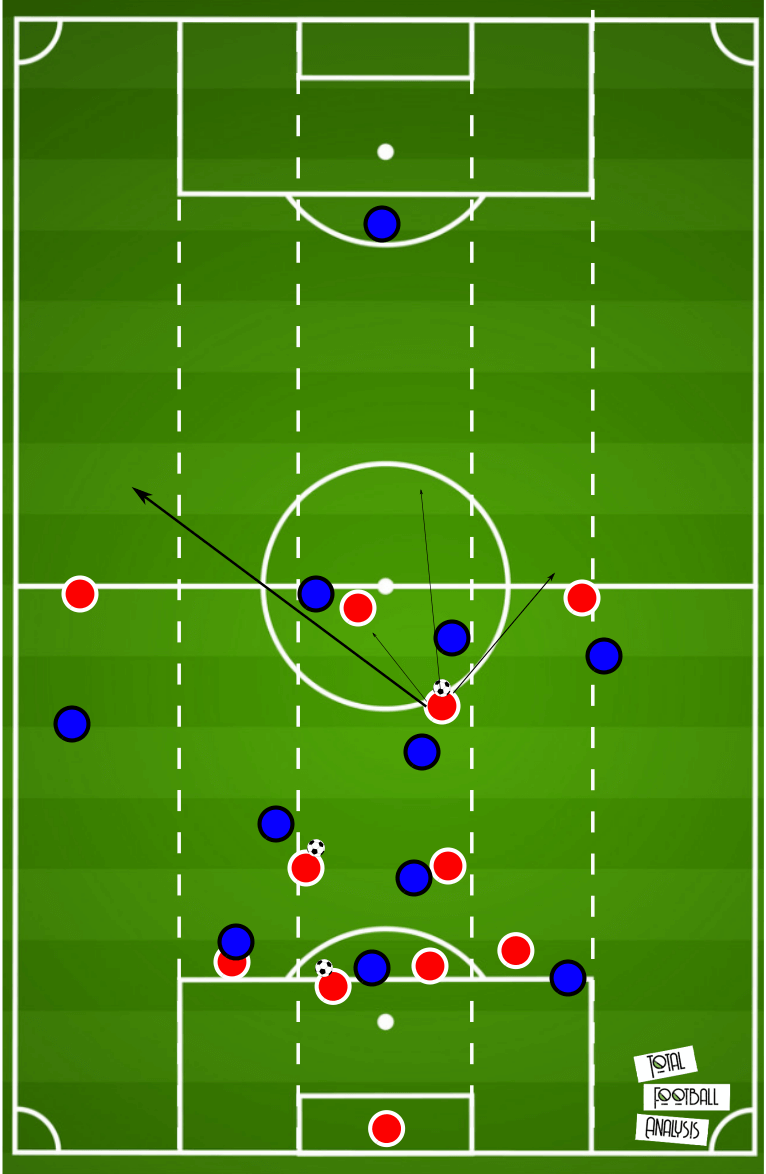 These practices are structured in a way to allow the team to start with the basics of recognising forward pass options and playing these quickly, and understanding the importance of playing short, fast, forward passes away from pressure, rather than just relying on a quick long ball forward. Once these principles have been understood and there has been some success with this, it gradually moves it into a full game situation, using pitch geography and a similar structure to a full game in the second practice, before putting constraints on the 11v11 to bring out the desired behaviour from the counter-attacking team.