Diego Simeone has been Atletico’s coach since 2011. During this time, the Rojiblancos have earned the reputation as the “disgusting package” of the Champions League. There is hardly a more unpleasant opponent in knockout games than Atletico. Physical tough and offensively sometimes mercilessly efficient – that’s Simeone’s football, even if it can be observed this season that Atlético generally acts offensively.

The task for the performance at the Etihad Stadium last week, on the other hand, was clear: get a reasonable result to throw the Skyblues out of the competition in front of their home crowd in the second leg. Atletico defended in a very disciplined manner, made excellent ball-oriented moves and had the right response to all the hosts’ quick attempts. Simeone‘s concept worked for a long time. “It was a really tough game. Atlético plays so defensively. But that’s their style and they do it well. It’s very difficult for us to create chances,” said De Bruyne on “Amazon”. Ultimately, Simeone’s plan was thwarted because Manchester City did have that one brilliant moment. Atlético was denied that. Since the 2003/04 season, the Rojiblancos have become only the fourth team not to find a shot on goal in a Champions League game.

In this tactical analysis, we want to get an overview of Simeone’s tactics. We will also see in this analysis how he changed several things this season.

Simeone is known for his low-risk style of play where team organization and tactical discipline course about anything else. He has put the team out to win the ball in dangerous areas or if the opposition make a mistake. Examples are: an opposition player takes a poor touch or if the opposition go into wide areas. When the opposition side is able to stay in possession for a longer period, Simeone likes his side to drop deep. They often allow the opposition to have the ball out wide and stay in the centre where they prepare for opposition crosses with numbers in the box. This also means that Simeone’s side often play on a counter and in a sense rely on individual talent in the offense. This is also one reason why his team is one of the most frequent that is caught offside. The base for this, of course, is the 4-4-2 formation. It has aspects of the game that Simeone is most known for. Of course, Simeone has played other formations (4-2-3-1 and 3-5-2) but the core of his game stays the same. 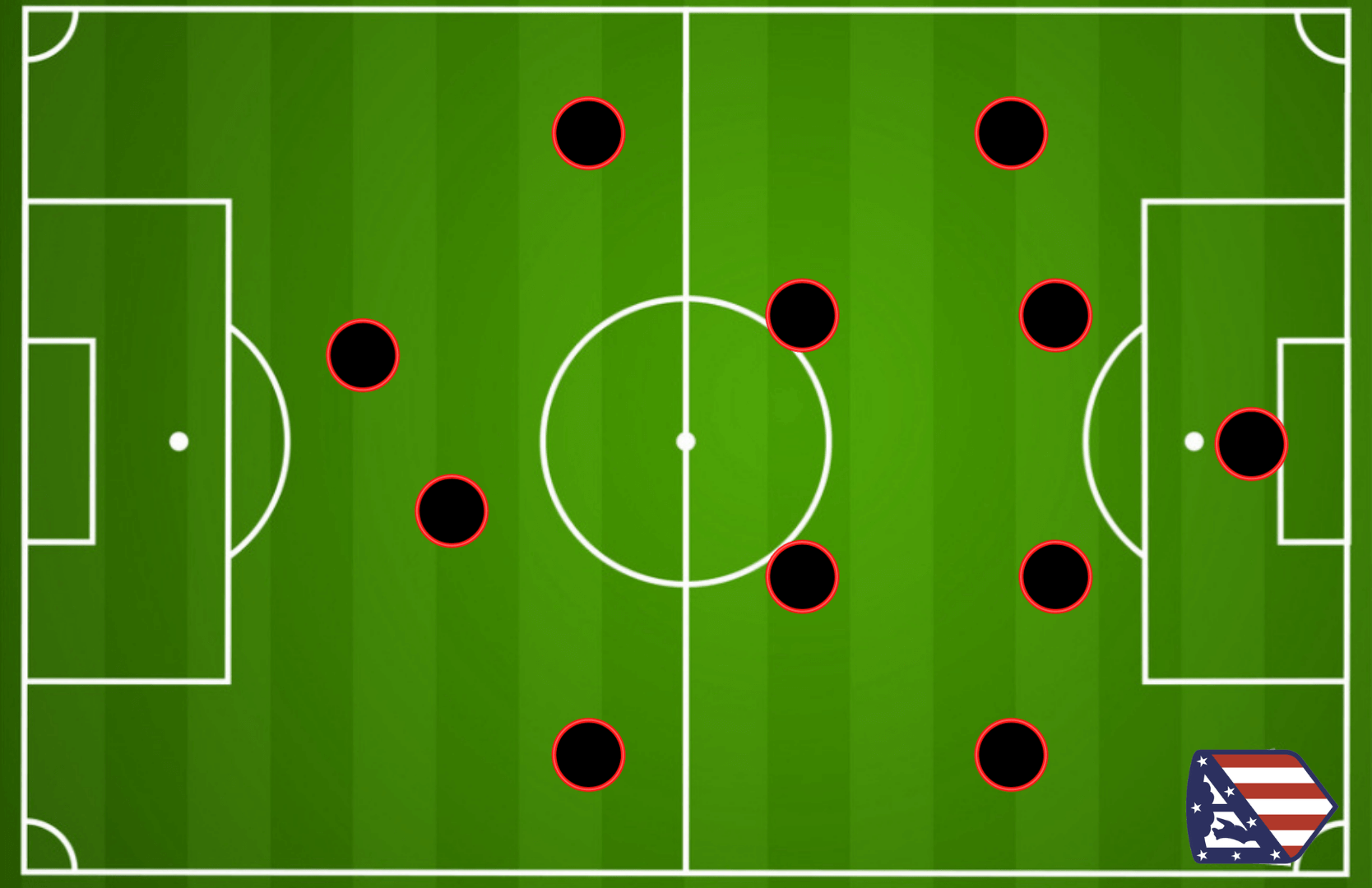 The transition into the 4-4-2 came in as soon as Simeone took over Atletico Madrid. Previously, they played in a 4-2-3-1. Under Simeone, the team’s plan is clear and they play on the counter with a traditional number 9 to get in behind the opposition’s defense or with the shadow striker coming closer for immediate support after the ball was played to him. This will eventually shift to a 4-4-2 or 4-4-1-1 style of defending, especially if Atletico is not able to win the ball back higher up the pitch and are required to drop deeper.

This style of defending was continued in the following seasons and Simeone strengthened his defensive blocks for example by playing with natural central players in wide positions. They are comfortable tucking in when defending narrow. As mentioned earlier, Atletico did not necessarily press high and if any of the forward players decide to press the opposition’s centre-backs, this would be after an opposition mistake (for example a badly placed pass or a bad first-touch). This means that the two forwards originally block passing lanes into the centre. From here, Atletico’s 4-4-2 system can effectively force the opposition into wide areas to double up and give them enough time to create a triangle press to further limit the opposition’s space. It is also important for the forward spaces to be taken control of. Otherwise, the opposition is able to switch the ball easily. In this sense, there are two possibilities available: The first is for the forward closer to the ball to directly drop into these spaces. 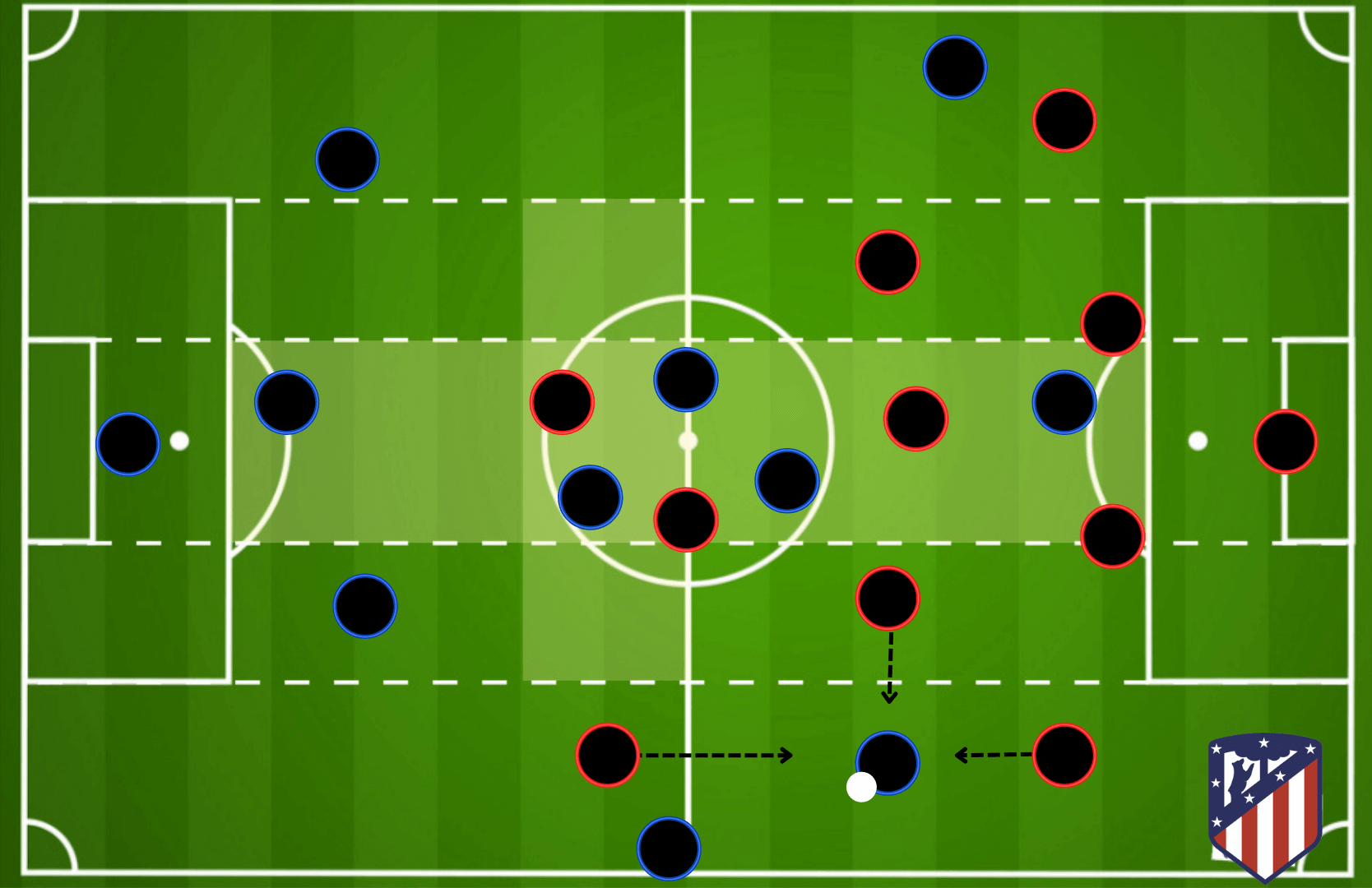 An alternative is if the closer of the two forwards cuts passing lanes back to opposition centre-backs and the further forwards tuck into these important spaces in the midfield area. This way, Atletico is able to effectively set up pressing traps. The sideline in this kind of defending is also important in order to trap the opposition using the touchline almost as an extra defender giving the opposition players nowhere to go. 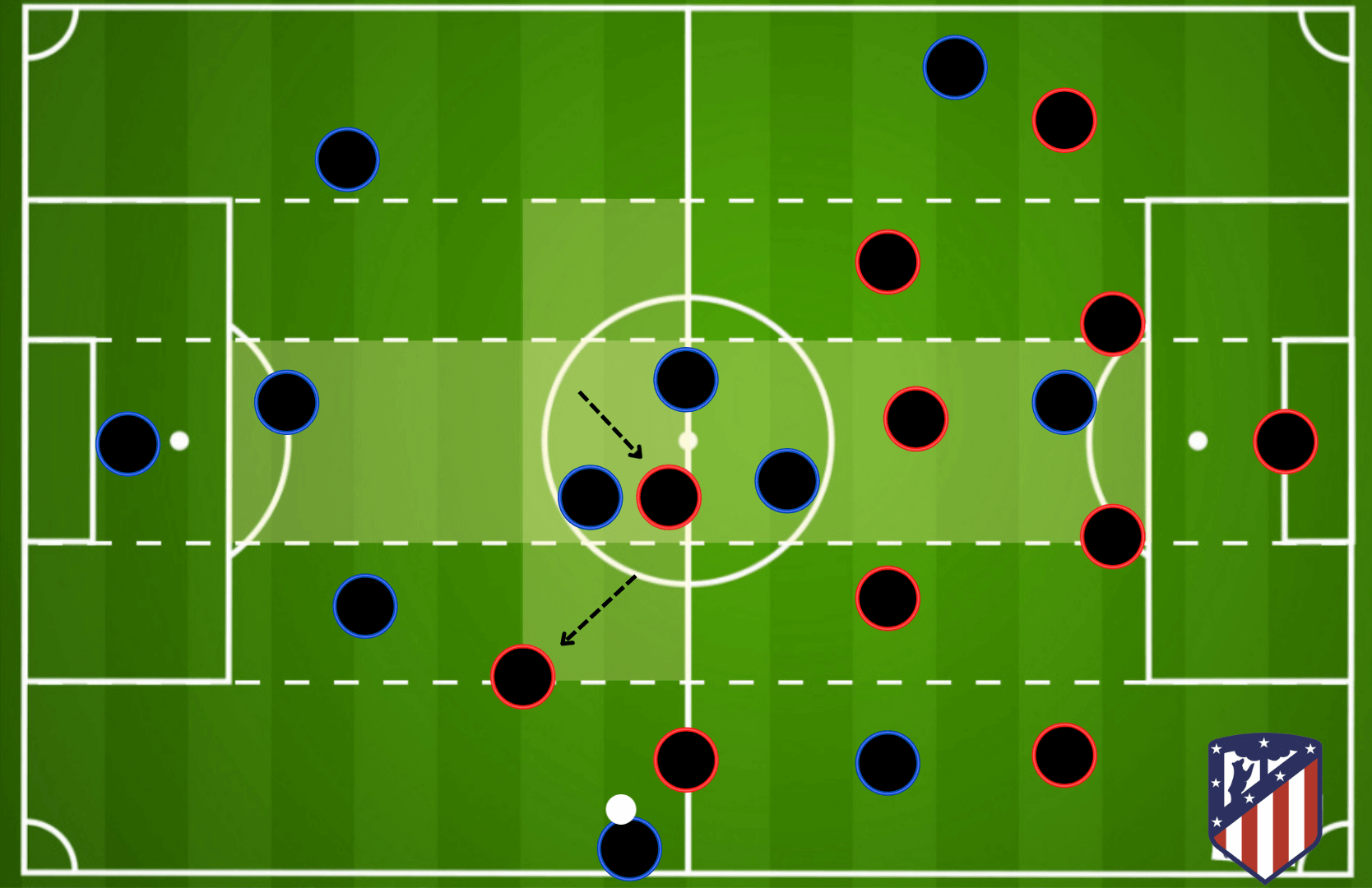 The way, Atletico is able to keep the compact shape is by having the central players and in particular the centre-backs in the central zones. 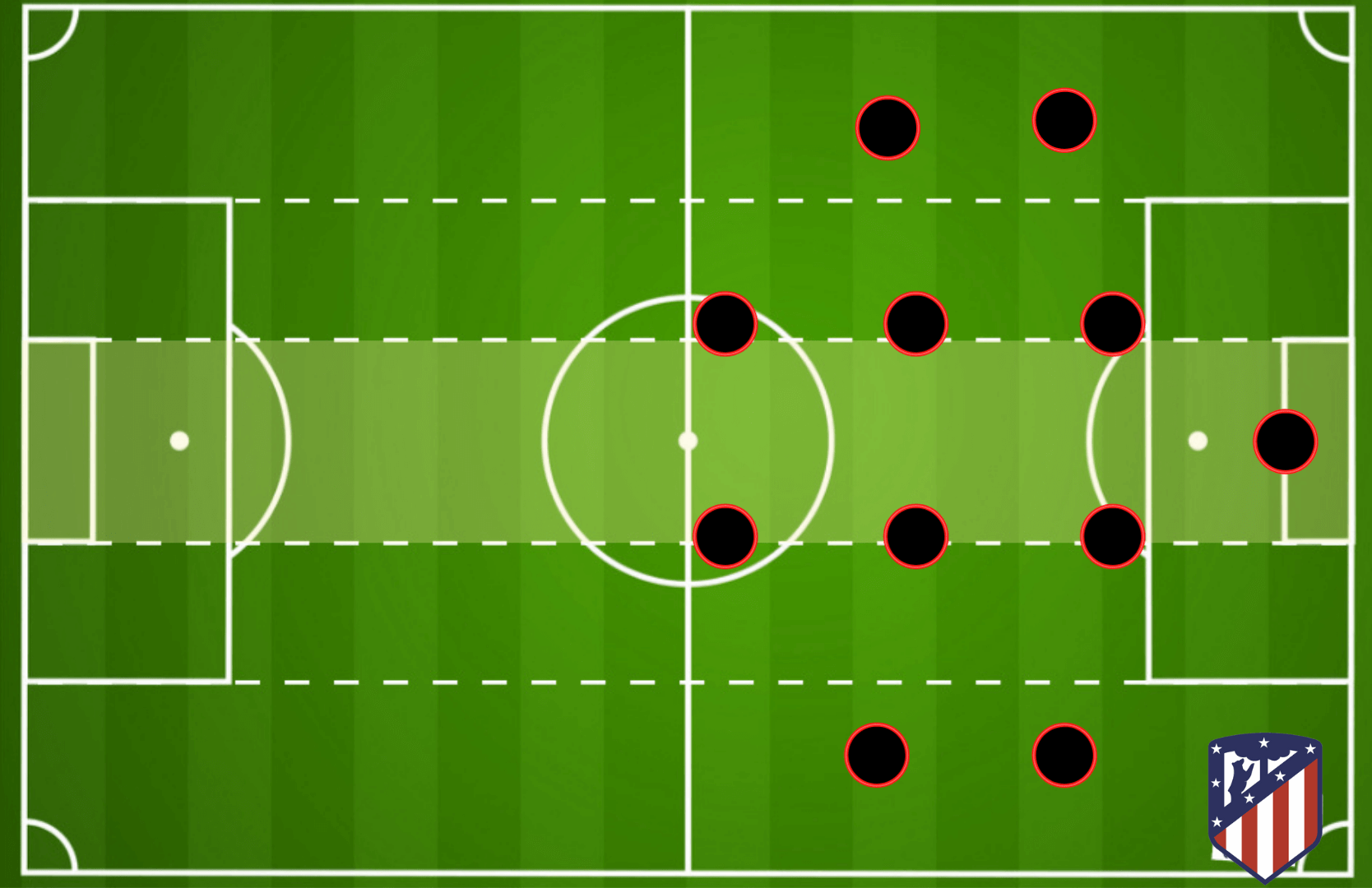 Often, since the full-backs are genuinely occupied with opposition wingers, centre-backs are required to drift out wide to cover these spaces and deep runs made by opposition midfielders. This is especially complicated in modern football with embedded full-backs and embedded wingers who constantly making runs in those spaces pulling the centre-backs out of position. Most dangerous zones are now free to be exploited. 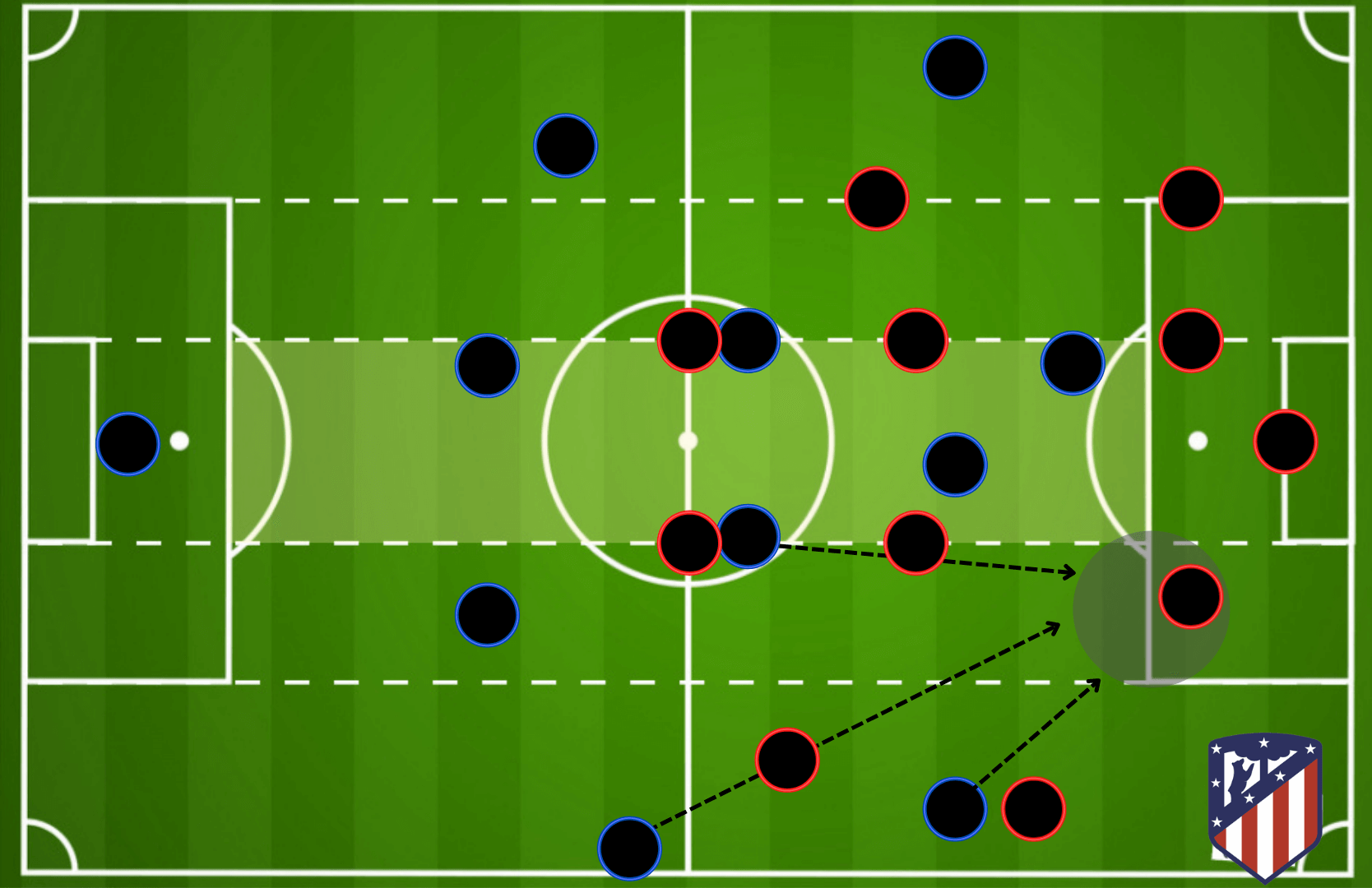 In Atletico’s case, the centre-backs generally stay central and the midfield players are giving the task of tracking back deeper runs. This is how Simeone utilizes the hard work of his players by organizing their hard work to make it as effective as possible rather than simply motivates his player to run a lot. This, of course, means more running for the midfielders (and in particular in Simeone’s teams, the wide midfielders) in order to allow the full-backs to stay with the opposition player who is positioned the most wide. 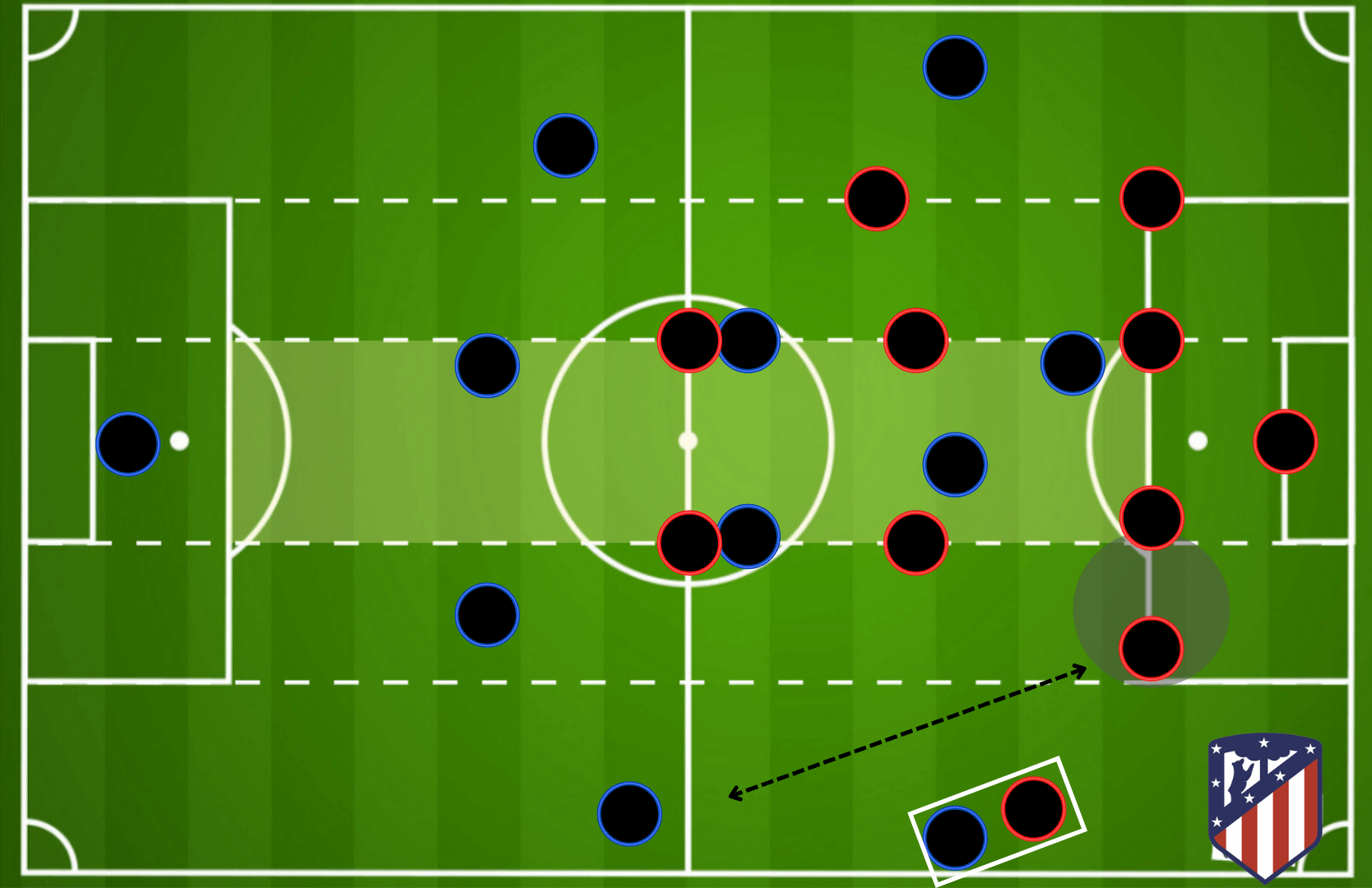 One interesting shift of Simeone’s tactics in the 2020/21 season has been the change to a 3-5-2 formation. However, it is important to understand that the core of these tactics stays the same (4-4-2). Since the 3-5-2 formation drops into a 5-3-2 in defense, there are spaces left on the wings that the opposition is able to utilize. 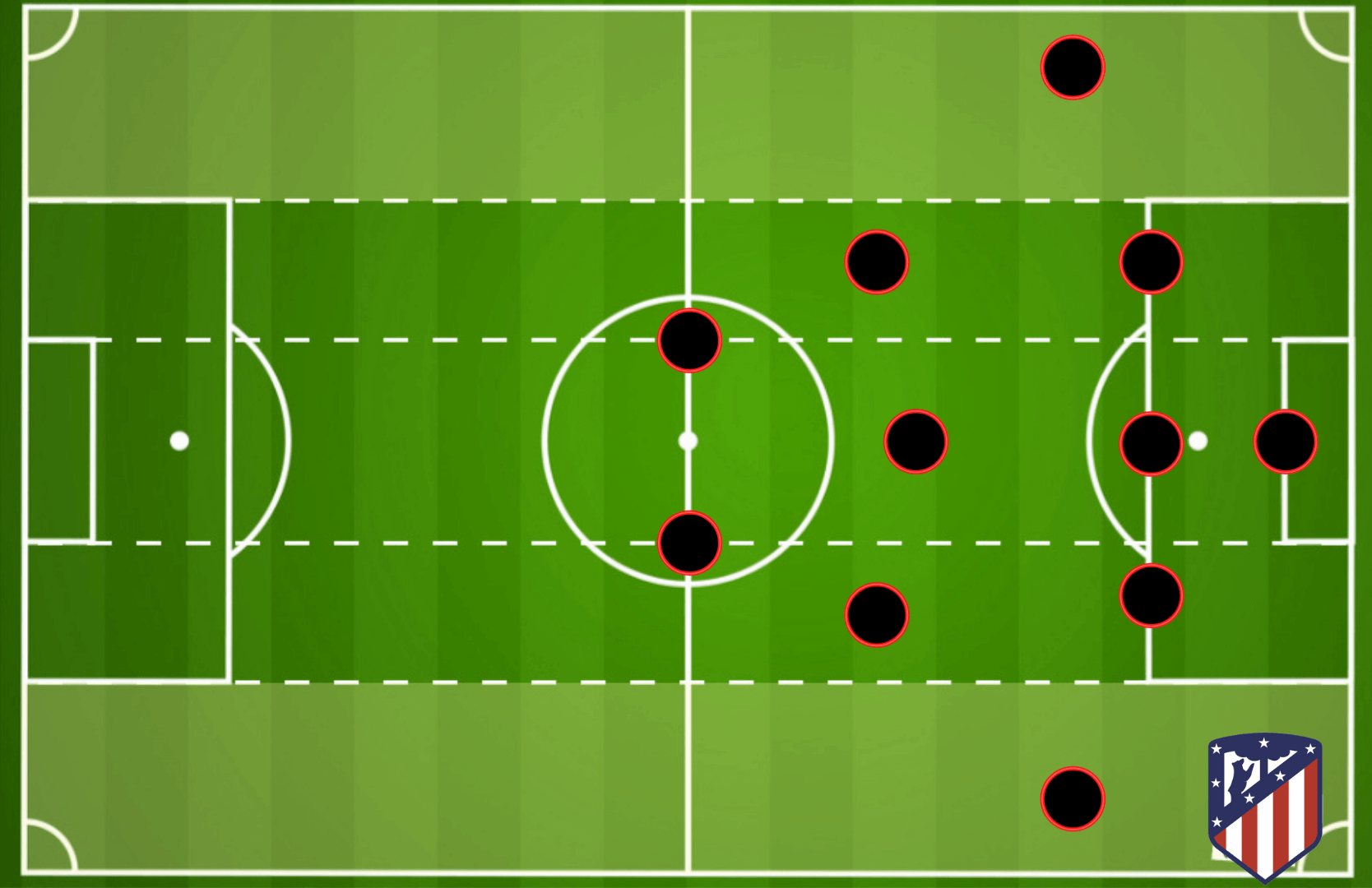 Since central overloads are of primary importance, the midfielders generally remain in the centre while the winger on the side of the ball moves forward to press on the ball carrier. If the remaining players shift over, the final formation resembles that of a 4-4-2. 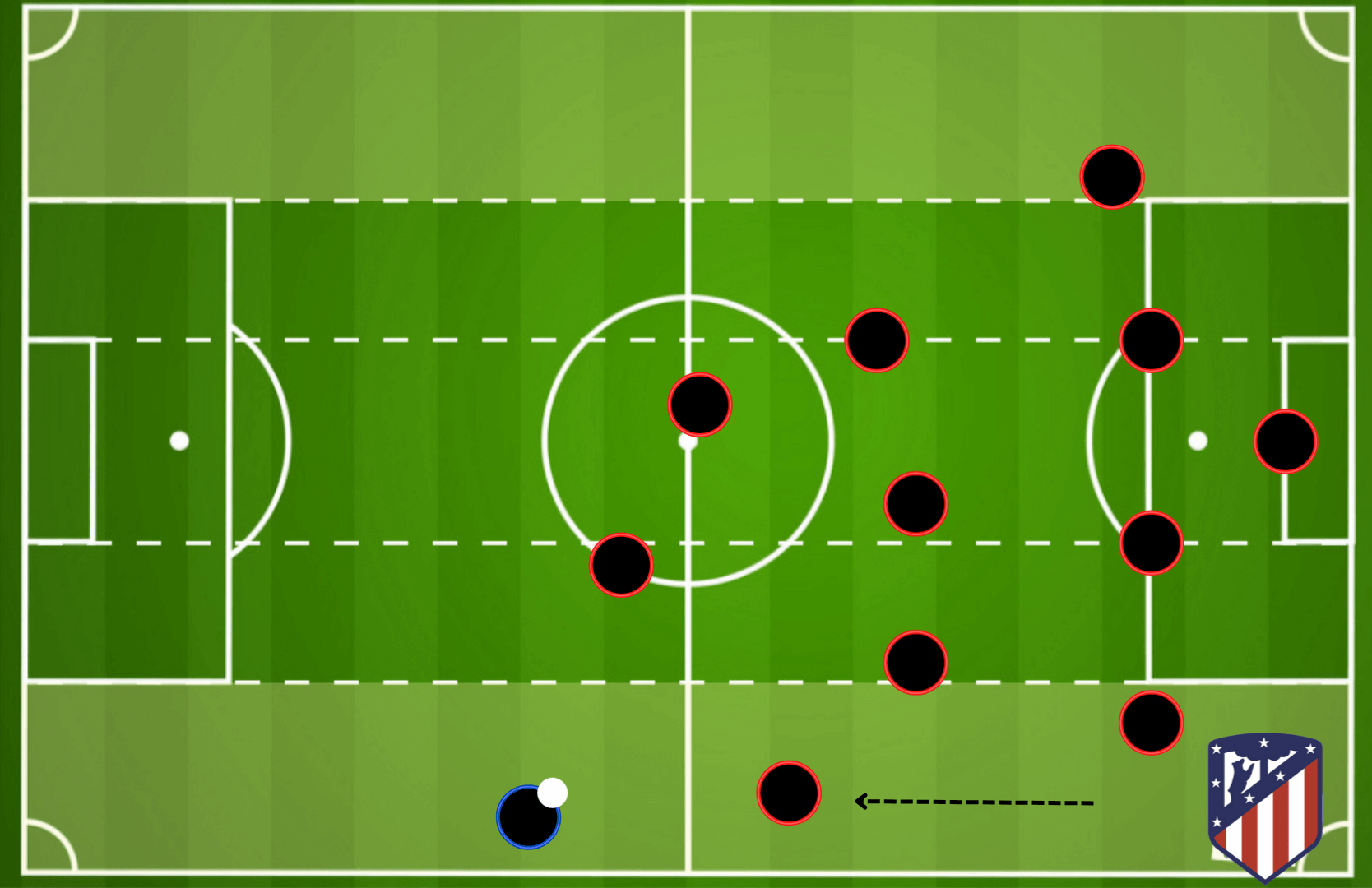 Against teams that are strong in possession or have quick players who are able to create chances, you can also see Simeone refer to a 6-at-the-back system. Often, one midfielder drops beside the centre-backs. So, they effectively form a formation with four centre-backs and two wing-backs. 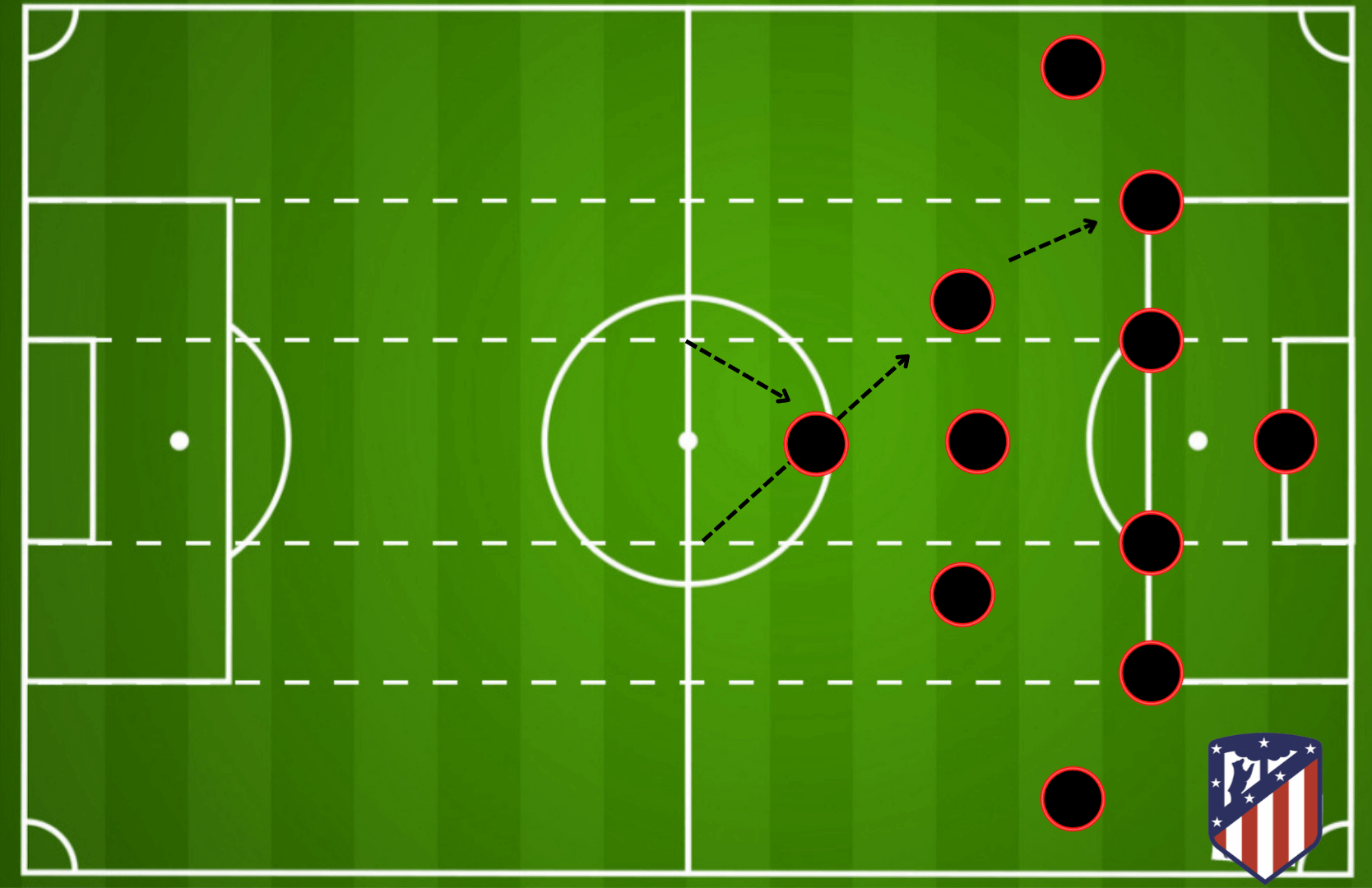 In attack, Simeone’s tactics also seem to be consistent – regardless if he plays with a 4-4-2 or 3-5-2. Since Atletico began to be more dominant, there are times when they commit plays forward (for example through a three-man build-up). Joao Felix is often the player who links the midfield with the attack in these situations. He drops between the lines or even further back into midfield. 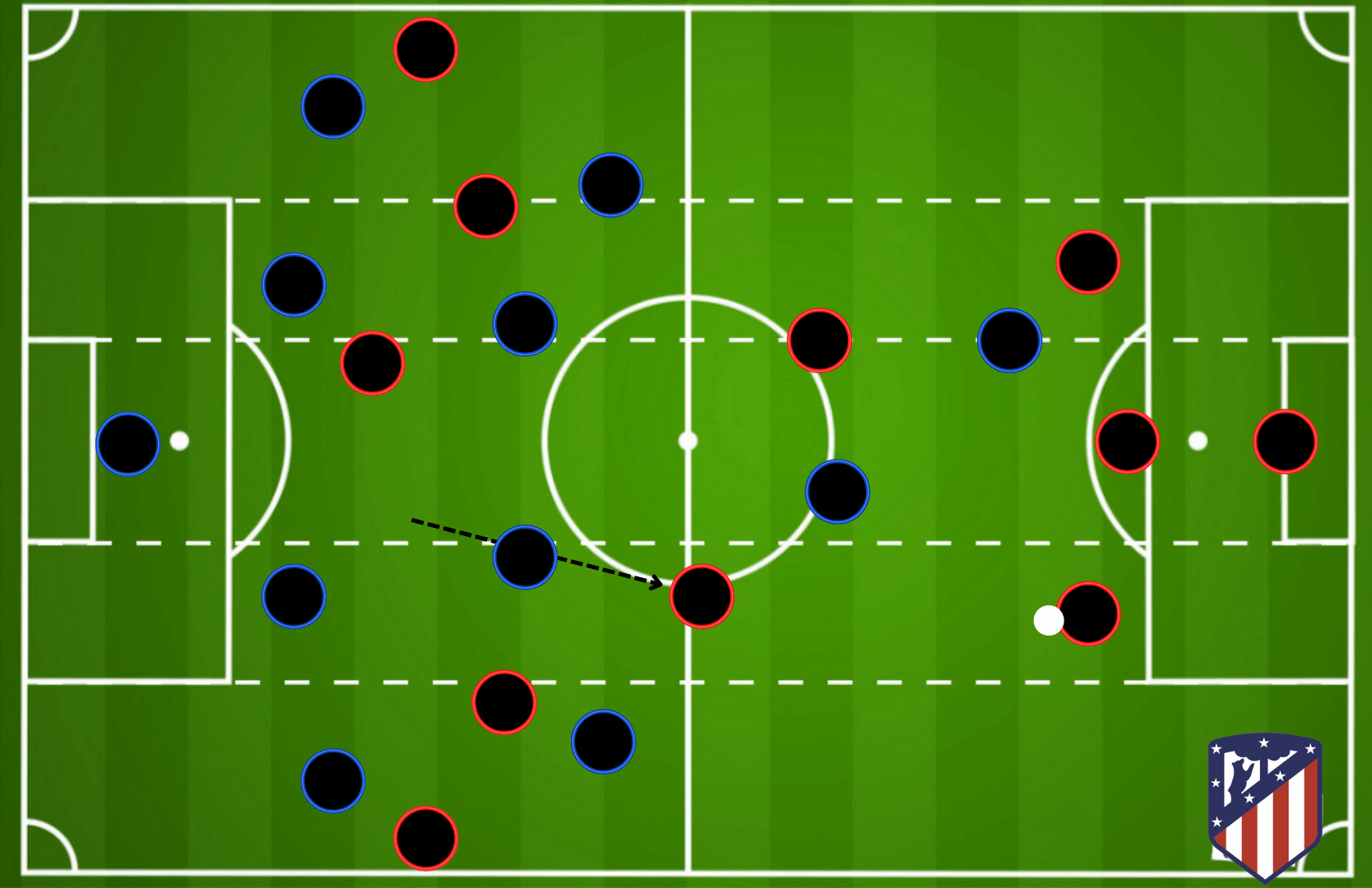 Suarez, on the other hand, can play as a target man who drops back to receive the ball and then starts a run into the spaces that he created himself. This is indeed one of Suarez’ signature off-the-ball movement patterns. 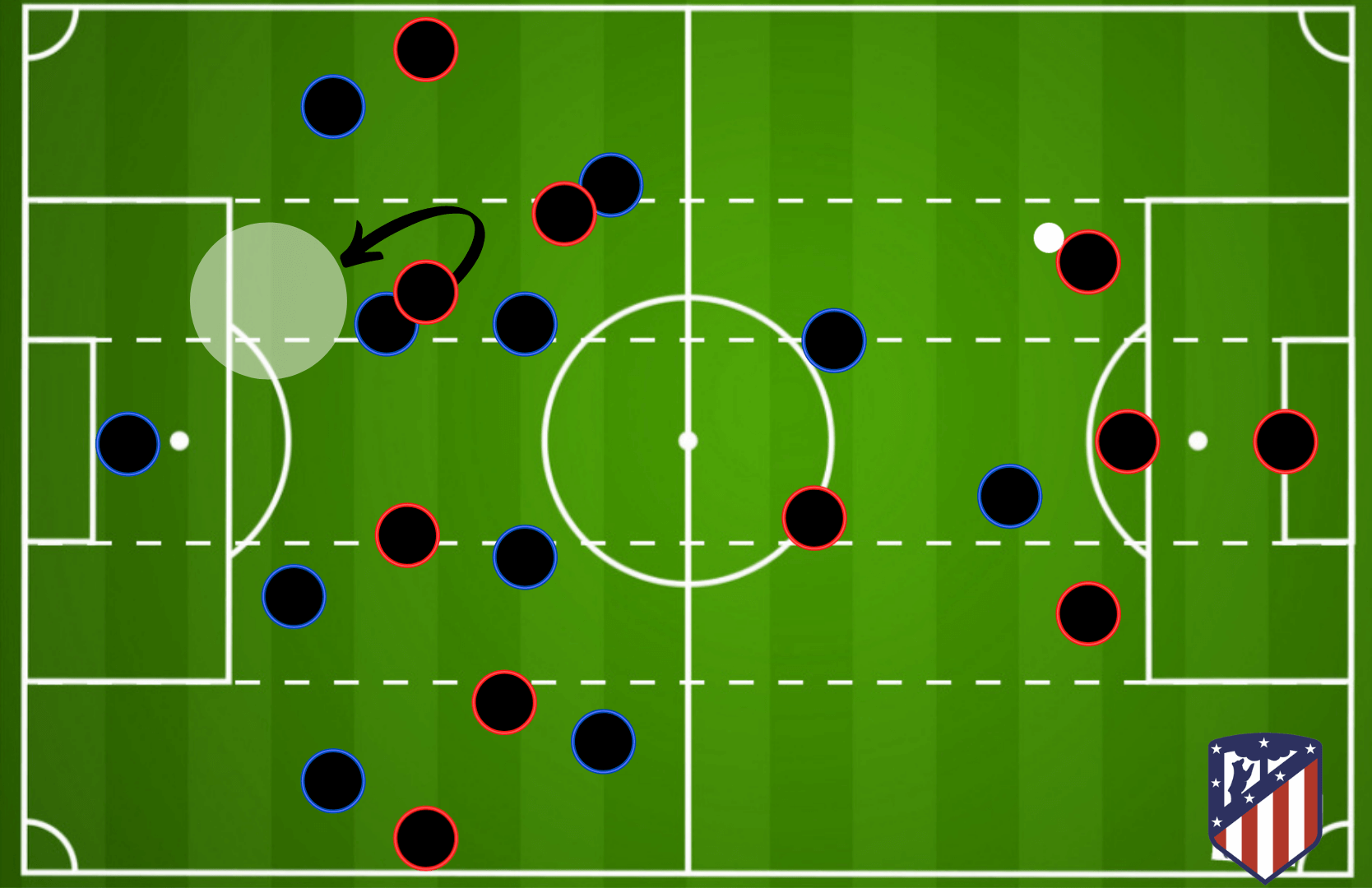 This principle is at the most simple level similar to playing with the 3-5-2 formation. The number 6 is dropping deep while the number 8s are positioning themselves higher up. One problem that can occur is when the midfielders line up high and Felix and Suarez stay in one line next to each other. The central midfielders can’t give them the way of more progressive passing options. 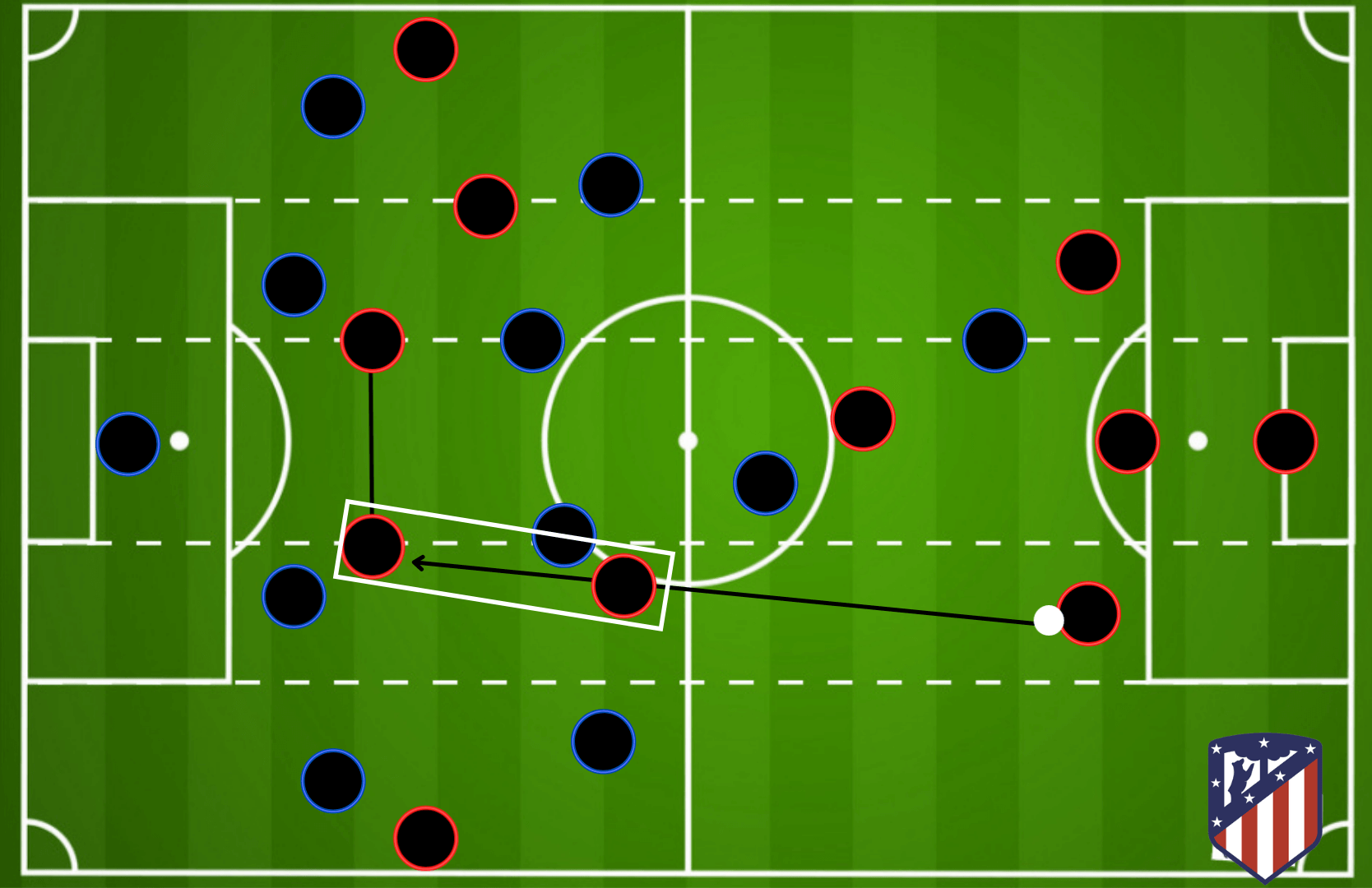 The solution that Simeone seems to have been implemented is: to attack they form a front-6. This effectively allows the team to occupy the five positional playing lanes. When two of the central midfielders line up vertically, this creates additional openings with players such as Felix receiving the ball in between the lines since they are able to situationally bind their opponent players and get the ball into Felix’s feet. 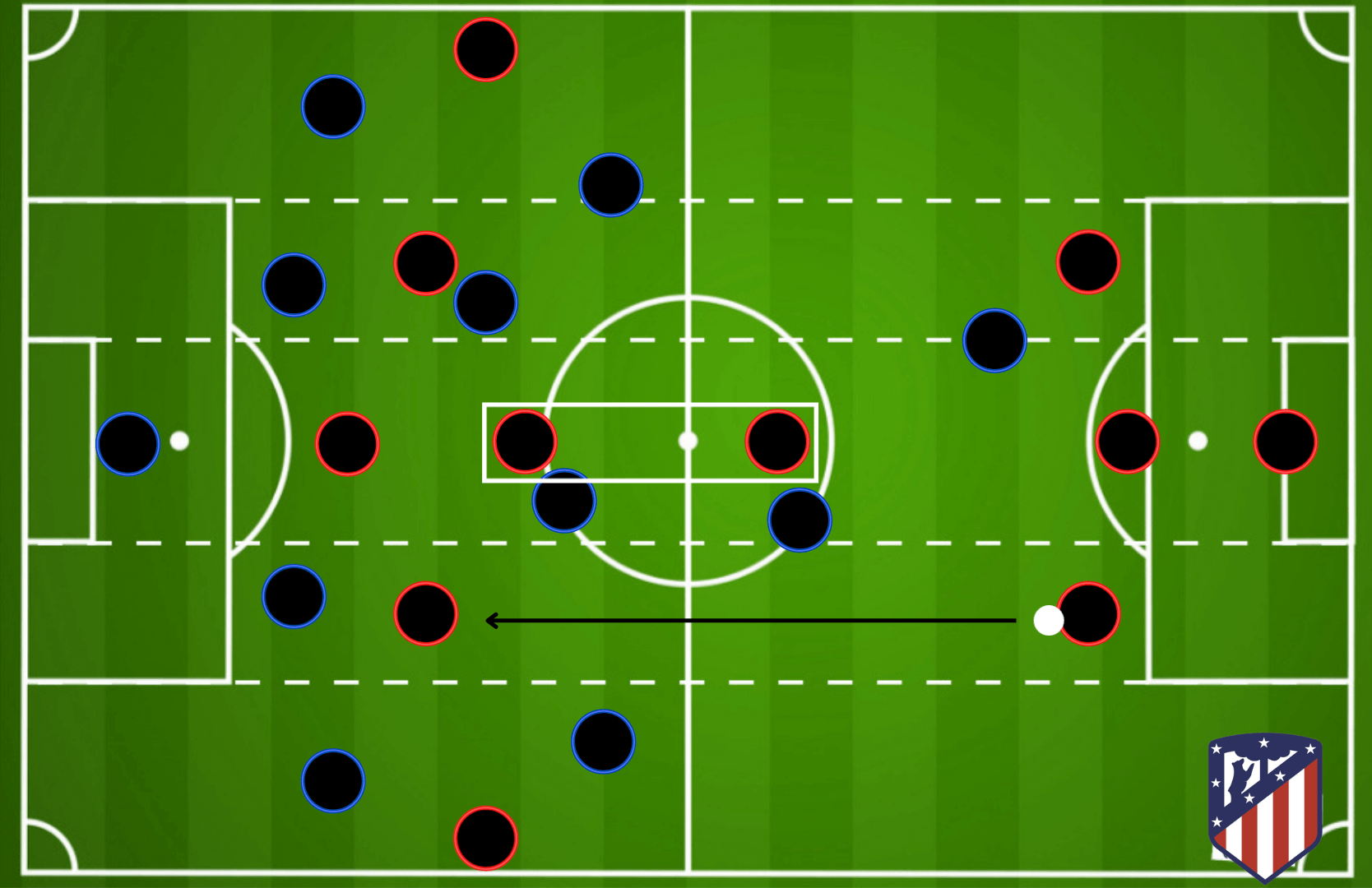 This seems to be way more offensive than what we have seen from Simeone’s teams in the past. It is there for a strategy that he seems to implement only when his team is clearly dominant in possession. His team is dropping deep again whenever the opposition is remaining in possession for a longer period or when playing in important games where Simeone does not want to drop points at any costs. In this case, Simeone goes back to his routes: to the compact defense and counter-attacking football which has been proved to be so effective over the years.