This article represents the second in a six-part series on coaching team defending. This is looking at group tactics, rather than the individual, so whilst individual technique or tactics can certainly be coached if necessary during these sessions, these aren’t the main outcomes of the practices shown in this analysis.

An introductory activity will look to work on pressing with an angle, reminding us of coaching points made in the previous week’s session, whilst encouraging the defender to curve their run and use their “cover shadow” to manipulate where the opponent will play. This will then lead into our second practice, which builds on this, along with working on compactness behind the press, whilst finally we will move into a phase of play that challenges the team in possession to put the session’s learning into practice.

Before moving into the practice of course it is important to warm up. WIth tactical sessions that will challenge the players mentally, it can be a good idea to include activities in the warm up that make the players think. This doesn’t need to be anything complicated, but German football appear to use these types of practices more frequently than perhaps other nations do.

Below is a link showing a simple exercise Hansi Flick used with the German national team last year, initially starting with the players throwing several balls to one another whilst on the move, before then including a ball on the floor and forcing the players to deal with two different stimuli.

Given this session will move onto the players working in teams in the second and third practices, whilst working to stay compact, a game of kabaddi can also be a fun activity to include in the warm up phase, and if this is the first time the players have played this game, it can be a chance to allow them to work out a solution to being more successful in the game.

As for the first-practice, several of these squares can be set up with two goals set up, one as a mini goal that the ball can be passed into, and the other a gate that the players will need to dribble through.

We can see the set-up in the following image. The defender will start by playing a pass into the attacker. 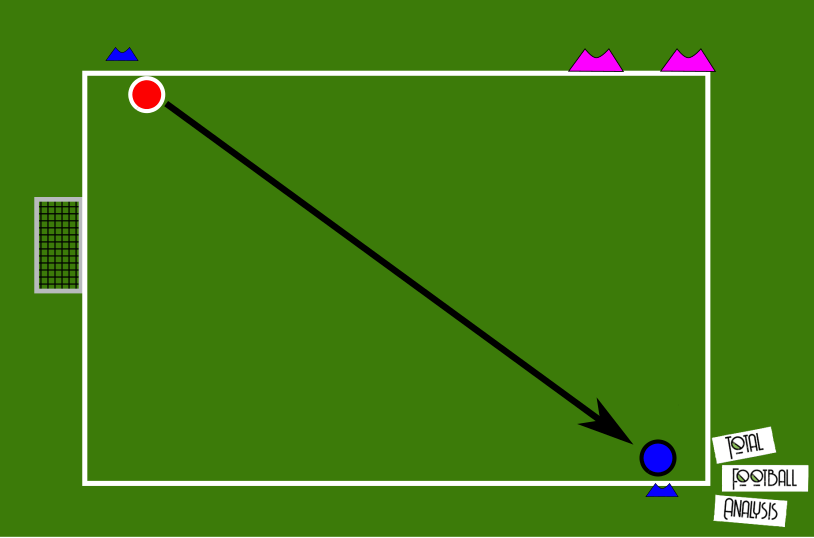 After playing the pass the defender needs to close the attacker down and seek to regain possession. If they win the ball and dribble out of one of the sides of the grid, they get a goal themselves.

This can be set-up where players work in teams, counting their accumulative points, or once they’ve had one go at attacking they can swap and be a defender, etc. 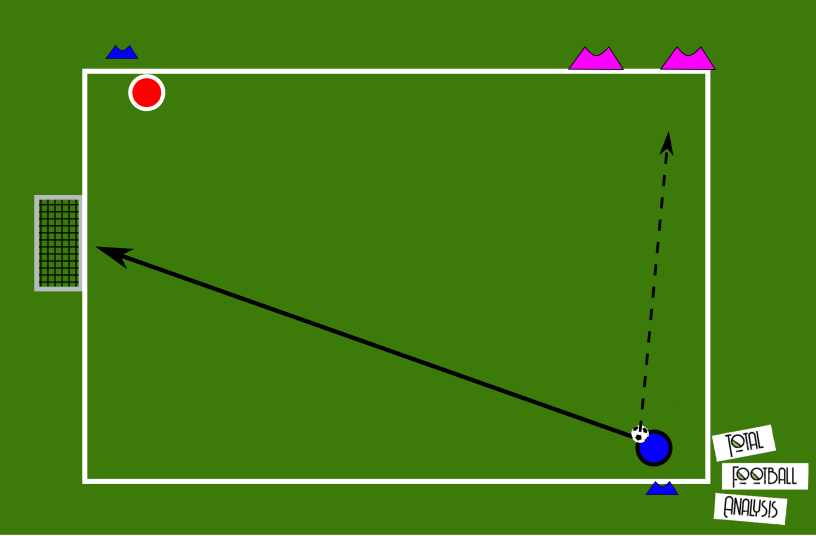 The defenders may initially struggle to block the pass into the goal. This can be a chance to remind them of a coaching point from the previous week, where the pressing forward looked to curve their press to dictate the direction of the opposition’s possession phase. They can employ this tactic once more, still applying pressure on the ball-carrier, but closing off the passing line to the goal as they do so. If they can then force them to dribble, they have a higher chance of regaining the ball. We can see an example of this pressing angle in the image shown below. 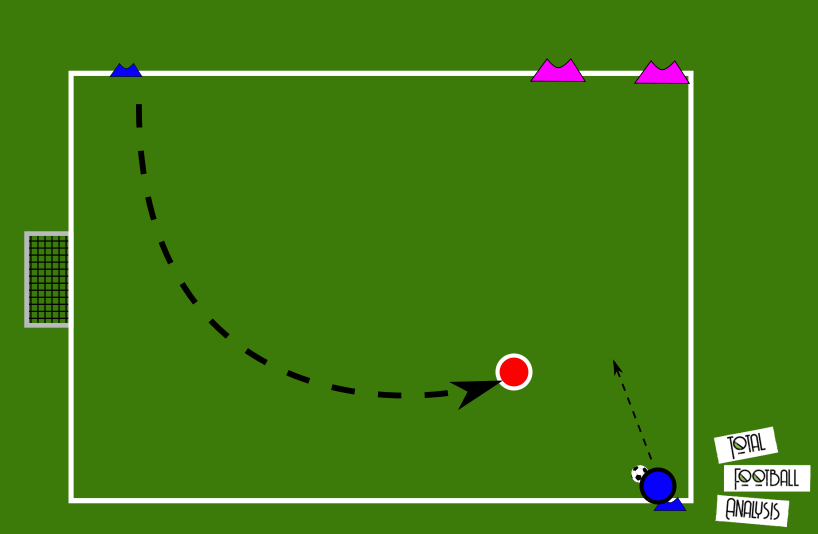 Following on from this activity we can begin to work in a practice that many of you may be familiar with already, however, it is an excellent practice for working on compactness initially, and then compactness with pressing.

The first time teams work on this practice it would make sense to have the defensive team, the team in the middle, stay there for a set amount of time, but once they have the hang of it, you can include a transition where the team that lost the ball needs to move into the middle, and the defensive team needs to break out and swap places with them.

The aim of the practice is simple: the two teams on either end of the grid need to work the ball to each other without the team in the middle intercepting the ball. To begin with the middle team must stay in their central channel, minimising the amount of effort needed to press and allowing them focus on their overall shape. 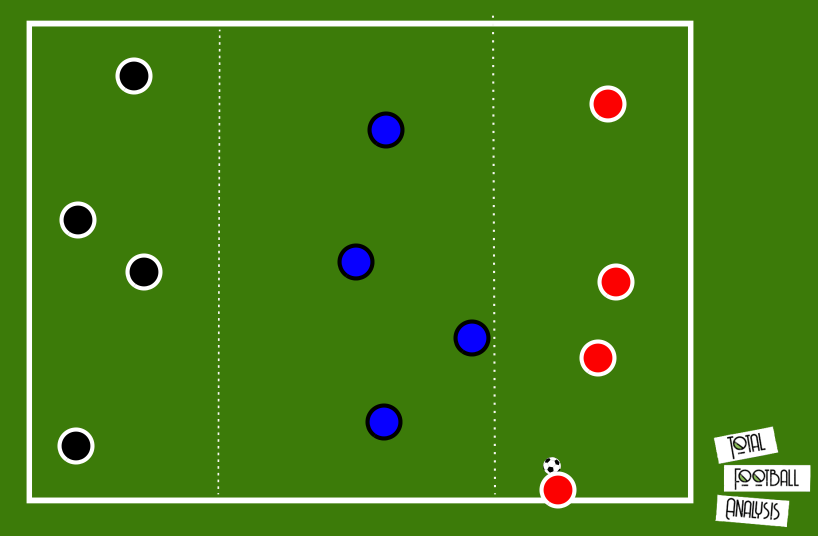 Of course allow the practice to run wherever possible and prompt the team in the middle to think about their positioning when they fail. Why are the opposition able to split them?

They should be coached to have one player step forward to press the ball, whilst the others sweep behind in a stagger. It is important the players covering behind don’t sit in a  flat line. A stagger, like the one shown below has the second closest player to the ball further forward than the two players to their left, and in taking this stagger they will be more difficult to split than if they had a flat shape. 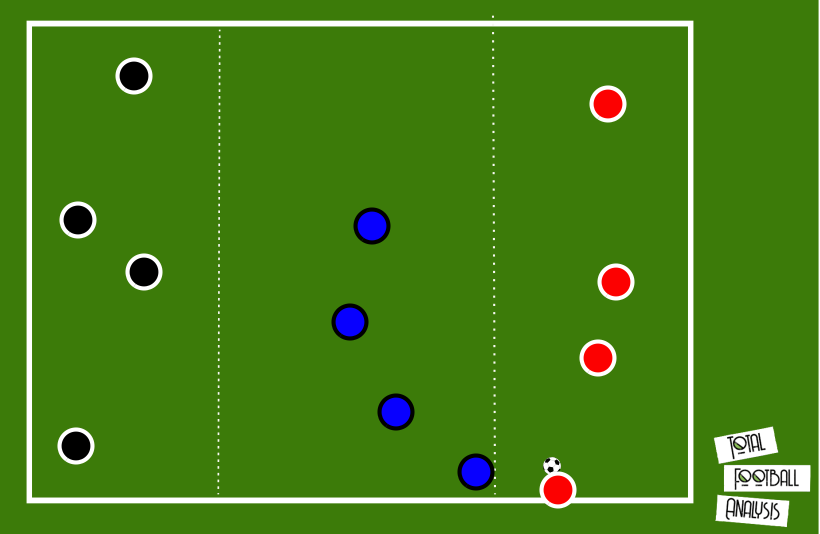 If the ball is circled by the team in possession, the defensive team need to have someone else step forward whilst the rest work again to shift back and cover this player, again looking to avoid an entirely flat shape, keeping some form of stagger. 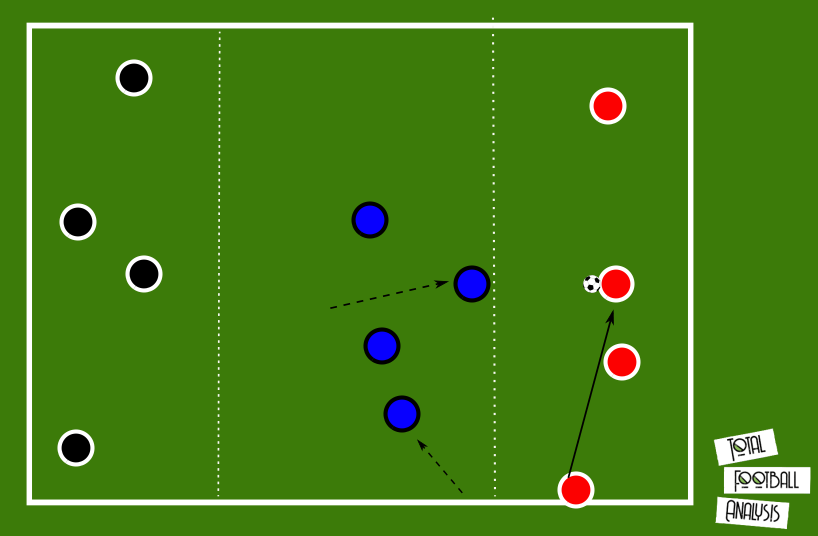 To progress this activity, one or even two defenders can step out of the middle channel and move into the opposition third to press if they need to, which will reduce the amount of time the team in possession have. However, the defensive team will need to be disciplined. If players get drawn too far forward, and they don’t have sufficient cover and stagger, blocking the forward passing lines, they will get played through. 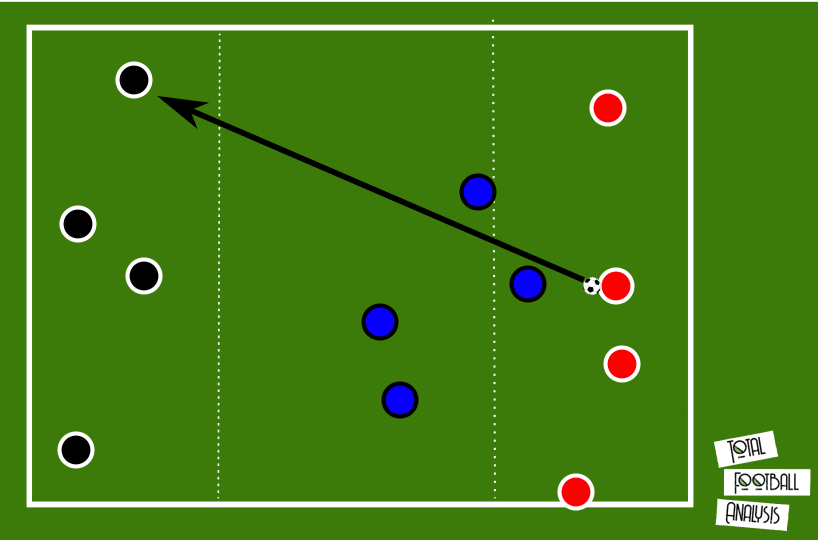 Whilst the main coaching point here is to work on the team’s compactness, where the players behind the press are covering this player and shifting around with a stagger supporting this press, there are other elements that should be worked on.

For example, can the pressing player curve their run to dictate where the opposition are forced to play? When doing this, can the covering players shift across to this side of the pitch?

Communication will be key between the defending players, not only communicating to one another who is stepping forward to press, but in organising their shape behind this player

Finally we can move onto the phase of play. Depending on the age of your team or even the number of players you have, you may wish to use the full width of the pitch. However, in the images shown in this section, we are playing on the width of the 18 yard-box in a 7 + GK, vs 7 + GK.

There is a 4v4 in the midfield section whilst the defenders have a 2v1 against a sole attacker in each end zone.

The aim is for one team to work the ball through the middle third, into the end zone, and, of course, score. Players are initially locked into each third, but a midfield can push into the final third to support their striker once the ball is played into this zone.

There are five channels that the middle third has been divided into. These midfields, when defending, should be encouraged to “turn five into three”. They can be explicitly shown what this looks like, or they can just be given that phrase as a clue, and use their learning from this session to find a solution. Until they do, they will likely be played through as shown in the following image. 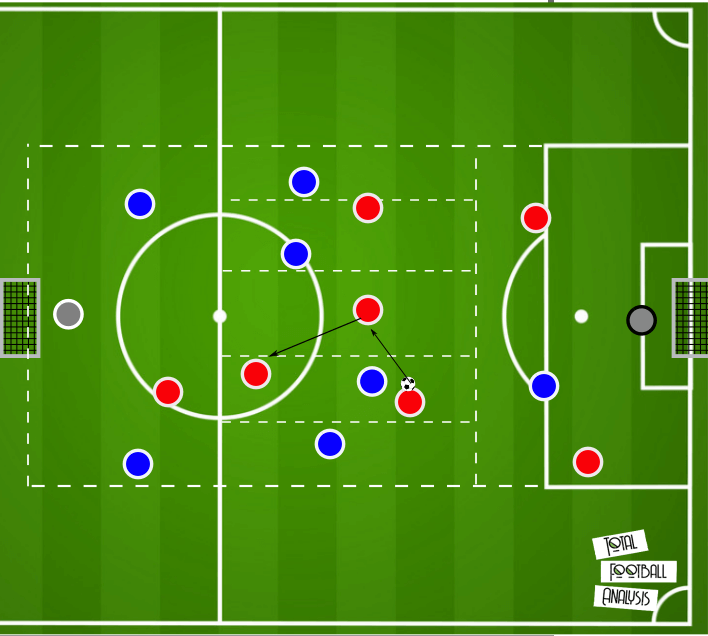 When in possession they will likely stretch the width of the pitch, occupying all five channels. However, when they lose the ball, we want them getting compact and supporting the player pressing the ball, like in the previous practice, and therefore, they should look to squeeze into three channels.

We can see an example of this in the following image. Due to their compactness, we can see that the ball-carrier can’t find a pass directly through the middle, and would be required to continue circling the ball.

Can the defensive team be encouraged to work together and be patient, and once they intercept or make a tackle, can they work the ball into the end zone and score? Goals scored after turning the ball over in midfield can be rewarded as worth double. 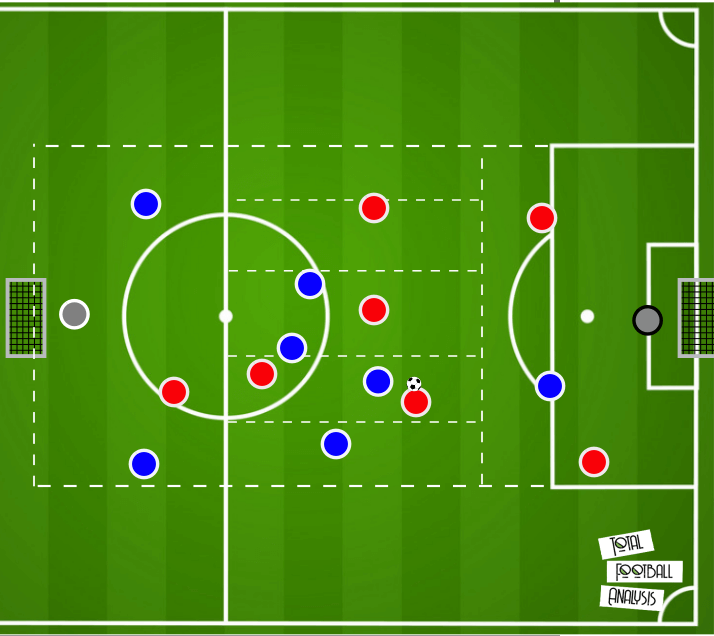 Ideally they should grow confident with this set-up and the centre-forward should be asked how they can dictate play with their press? Once one centre-back plays to the other, can they split both of these players with a curved press, as shown in the following image, and can the rest of the midfield behind them shift across to this side of the pitch, supporting this press? 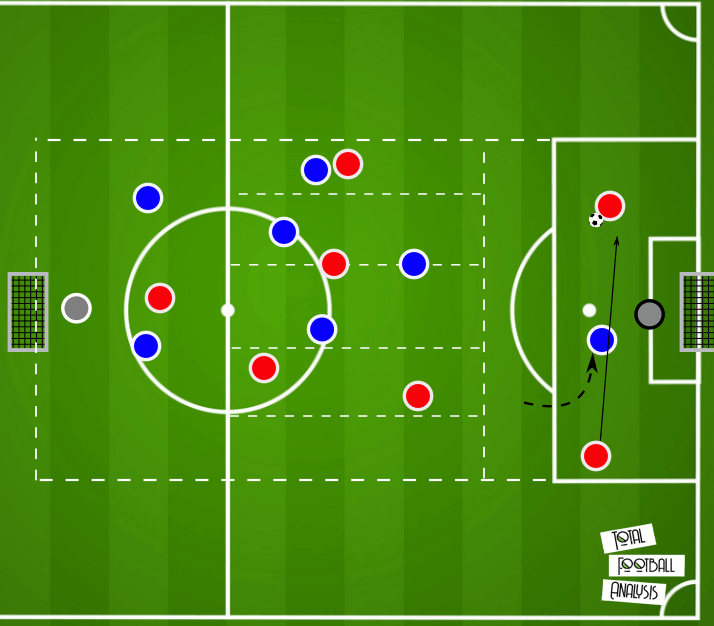 Locking players into thirds can lack game realism, but can initially provide the structure needed for us to be successful. If they are succeeding with this set-up and need to be moved on, by all means remove the boundaries, but ask the players to continue using the five channels as a reference point. Offsides should be called though to encourage the defences to push up, keep a compact shape with their midfield, and prevent them from being overrun by operating in too much space.

This article has sought to provide some ideas for a session based on a tactical analysis of a team’s midfield supporting the press of their front line. This session has built upon the tactics of the previous week’s session. As said last week, this session doesn’t need to be followed word-for-word, but hopefully can be used to ignite some ideas for your own team and game model.