Benfica’s head coach Bruno Lage has overseen a remarkable turnaround since taking over at the club in January 2019, leading them to their 37th league title in unlikely circumstances.

When Lage was promoted from his position as B team manager to take over from the sacked Rui Vitória, Benfica had already lost three times in the league and seemed set to watch FC Porto claim the championship for the second year in a row. But in the remaining 19 Liga NOS games, Lage led Benfica on a miraculous run, winning 18 and drawing one to snatch the title back from Porto by a two-point margin.

This was even more impressive considering the drastic changes he implemented, in both system and personnel. The players quickly took to Lage and his new 4-4-2 formation, which allowed wonderkid João Félix to shine up front alongside Swiss striker Haris Seferović.

As well as focusing on influential players like Félix, this tactical analysis will examine the dynamics of Benfica’s attacking play, through which they scored an astonishing 103 goals in this 34-game LigaNOS season.

Promoted from the B team in the summer of 2018, Félix began the season as a rotation option on the right- hand side of Vitória’s 4-3-3 system, but Lage recognised his potential to play as an out-and-out striker.

And the 19-year-old did not let his new manager down, as he notched 15 goals from just 21 starts and five substitute appearances over the course of the season. To complement his excellent technical ability, the youngster makes intelligent runs, such as in the image below where he switches direction to break free from his marker and get on the end of the cross to score Benfica’s third goal at home to Marítimo. 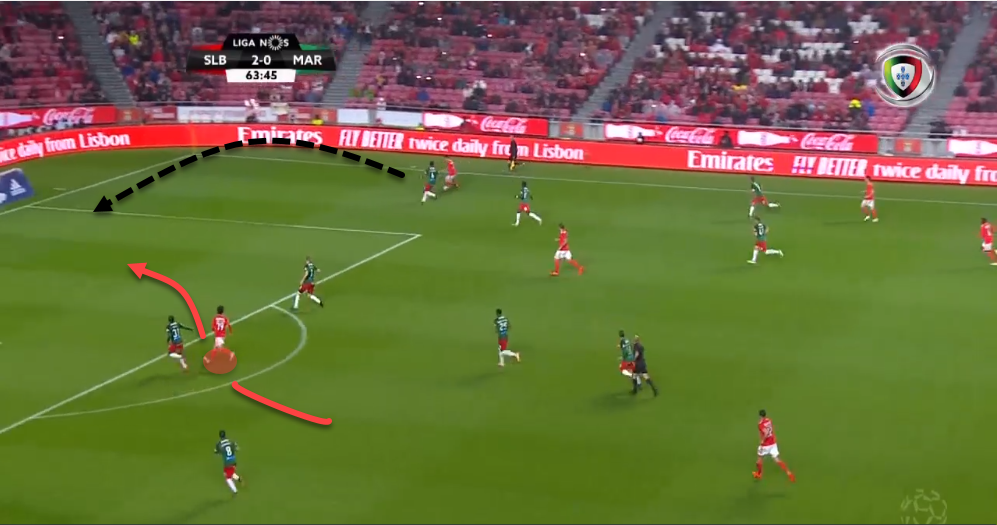 As well as posing a goal threat, Félix is equally adept at creating chances for teammates, as can be seen in the image below where he plays through fellow striker Jonas with a first-time pass after having dropped deep to receive the ball from midfielder Luís. 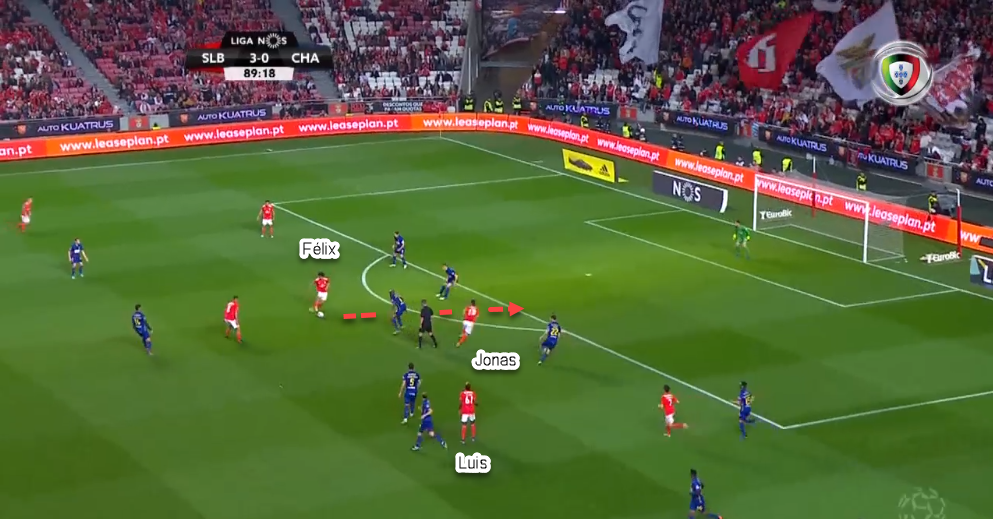 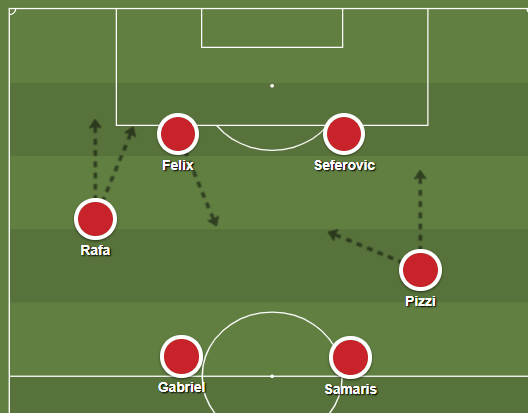 It is not just up front where Bruno Lage has made changes. He has also made major adjustments to Benfica’s midfield. In terms of personnel changes, Brazilian central midfielder Gabriel has become a mainstay in central midfield alongside Greek midfielder Andreas Samaris.

Neither player got much playing time under the previous manager but with Ljubomir Fejsa a long-term injury absentee, Samaris seized his chance and has been an automatic starter under Lage. His impressive displays protecting Benfica’s back four with his commitment to get back and defend have earned him a new contract after he had looked set for the exit door back in January.

As shown in the graphic above, Pizzi, who previously played in central midfield, was given a new role on the right-hand side of the four, though really in Lage’s system he has a great deal of freedom to roam the final third of the pitch in order to find space from where he can influence the game.

In the image below, where Pizzi is in possession, we can appreciate how much positional freedom is given to the four attacking players (the strikers and wide midfielders) when Benfica have the ball. Nominally the left-winger, Rafa has moved into the centre, and striker Félix has drifted into the channel on the right.

This freedom afforded to the attacking four allows them to overload the opposition. They can afford to do this as the central midfield pivot of Gabriel and Samaris (circled in red) sit deeper, ready to recycle or recover possession as and when necessary.

The full-backs (circled in blue) provide width to counter any imbalance in the positioning of the front four. 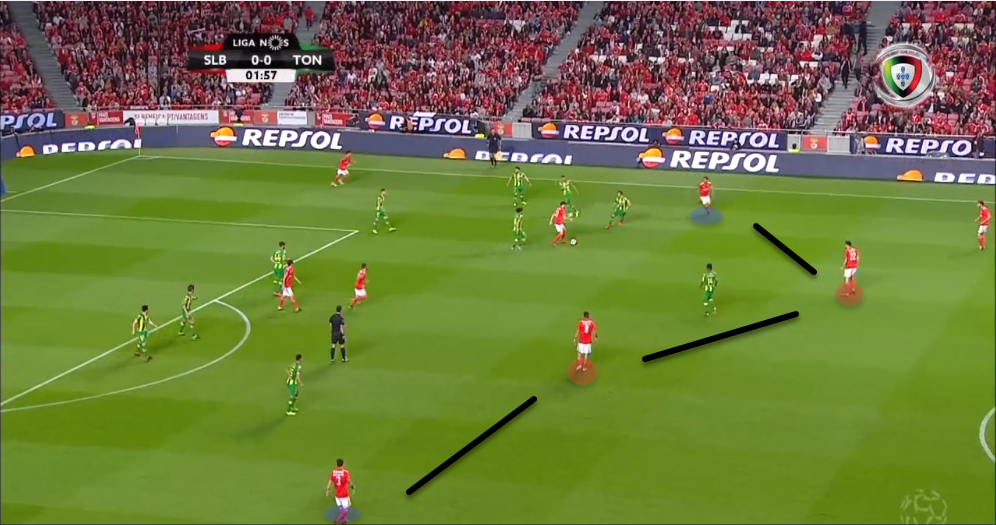 Although the two central midfielders are tasked with a somewhat more disciplined role, this doesn’t mean that they don’t also make contributions to Benfica’s attack. Brazilian midfielder Gabriel, a 10m euro signing from Leganés is a particular threat in this regard.

As is common in Portuguese football, Benfica like to get the ball into wide areas quickly and to do this they need a player who can play long-range accurate passes to find the full-backs and wingers in space.

This is where Gabriel excels. When the attacking four overload one area of the pitch, the 25-year-old is often on hand to play pin-point cross-field balls to the free player on the flank, as in the image below where he picks out full-back Grimaldo in a game away at Sporting CP.

Whilst you would expect the full-backs of a title-winning side to make big contributions to attacking moves, Benfica’s André Almeida and Álex Grimaldo take this to a new extreme.

Grimaldo chipped in with 12 assists in the 2018/19 season, making him the third-highest assist provider in Liga NOS. Who was behind him in fourth place? None other than his right-sided counterpart Almeida, who recorded an equally impressive 11 assists.

The main beneficiary of their crosses has been striker Haris Seferović, who at 6 ft 2” poses a significant aerial threat. In fact, ten of the golden boot winner’s 23 goals came from assists from the full-backs, who supplied him with five apiece.

Since they are both tasked with providing width, the full-back on the far side can often find himself in a lot of space should he be picked out by a cross-field ball from the likes of Gabriel or Samaris. This is exactly what happened in the image below, where former Barcelona left-back Grimaldo received the ball in space before delivering a pin-point cross to the head of Argentine winger Salvio who headed home for Benfica.

Benfica don’t often find themselves having to defend for extended periods, but when they do, they settle into a flat 4-4-2 shape. Should the opposition play out from the back, the strikers will look to block any passes between the defence and midfield.

Once the opposition break through the first line of the press, however, midfielders such as Gabriel will step out to close them down as in the image below.

One of the reasons why Benfica have managed to score so many goals this season (an average of three per game) is that they aggressively counter press to take advantage of any misplaced passes by the opposition. In the images below we see how Spanish left-back Grimaldo makes up a lot of ground to intercept a pass, thus starting a dangerous counter-attacking move for the encarnados. 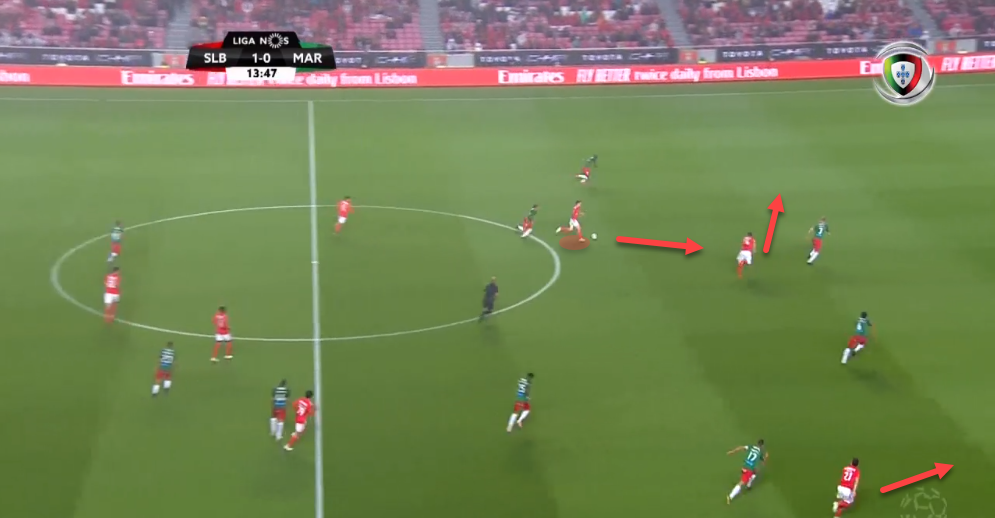 Although so far in his short reign at Benfica things couldn’t have gone much better for Bruno Lage, he will face challenges ahead. Europe’s richest clubs are already eyeing up some of their brightest young stars, and it won’t be long before some of them move on.

If Lage is to continue to play with the 4-4-2 formation that has proved so successful so far, the club might want to look at investing in more strikers, with 35-year-old Jonas possibly about to leave.

When Lage rotated his team in the Europa League, he was sometimes forced to play the likes of left-winger Franco Cervi up front, a position he didn’t look comfortable in. And if Benfica are going to perform well in next season’s Champions League, they will need to make sure the manager has the players he needs to implement his favoured system.