Despite English football still being on hold due to the recent outbreak, Liverpool are very much on top of the world. Not only have the Reds secured another Champions League trophy for their cabinet last season but are on course to sweep the competition in the Premier League and win the coveted crown by a landslide.

Still, the Merseyside giants are much more than their first-team squad, led by the brilliant Jurgen Klopp. Liverpool have an academy full of young and bright prospects that would love nothing more than to go out there and show their worth.

But unfortunately, most of those kids are still largely unknown and will need more developing before they start gracing the pitches of the top-flight. This data analysis, however, will delve deeper into the statistics and try and uncover some of the best gems Liverpool’s academy has to offer. The data means nothing without context and after we’ve selected five of the standout prospects, further scouting will be done on them in the near future.

Before we start with the analysis, it is important we first lay the ground rules and set the metrics correctly. Academies are generally a great source of talent but the data on them can be rather scarce and incomplete. We’ll be working with Wyscout’s database for Liverpool’s U16, U18 and U23 teams as well as the players that are out on loan.

The players will be analysed according to some of the key metrics, such as goal contribution, creativity and ball progression. It is also important to note that some of the players will inevitably miss out on the shortlist as data on them may be insufficient for a more in-depth comparison. Similarly, only players with 500+ minutes will be taken into consideration since game time can seriously skew data findings of any kind.

To start this data analysis, we will first be taking a look at the aforementioned key metrics to see which of the players stand out. The first one is rather simple and yet, extremely effective in recognising the best and most effective goal contributors. 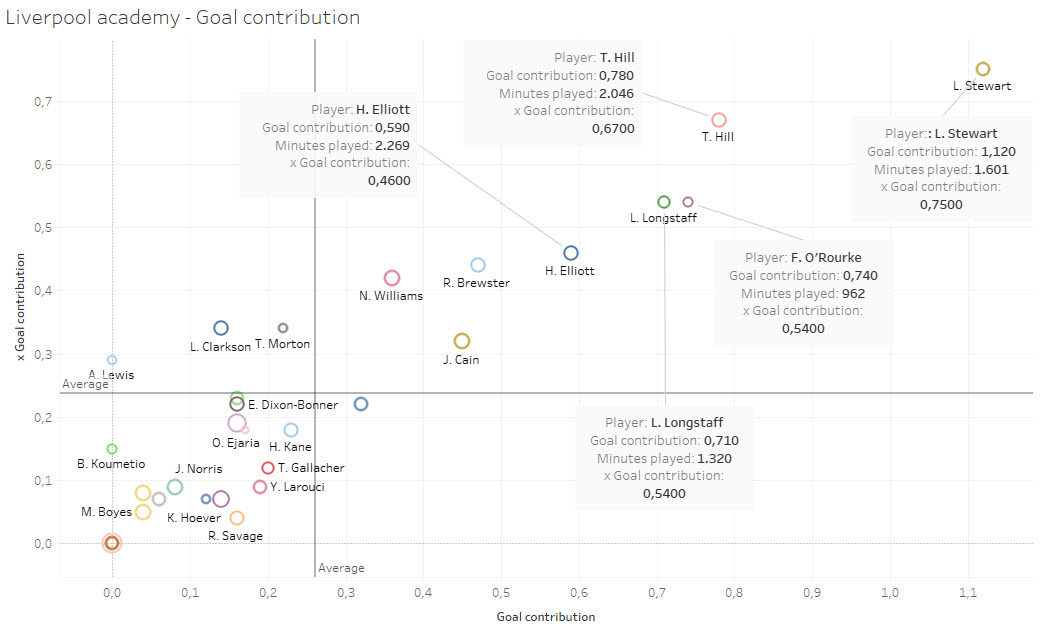 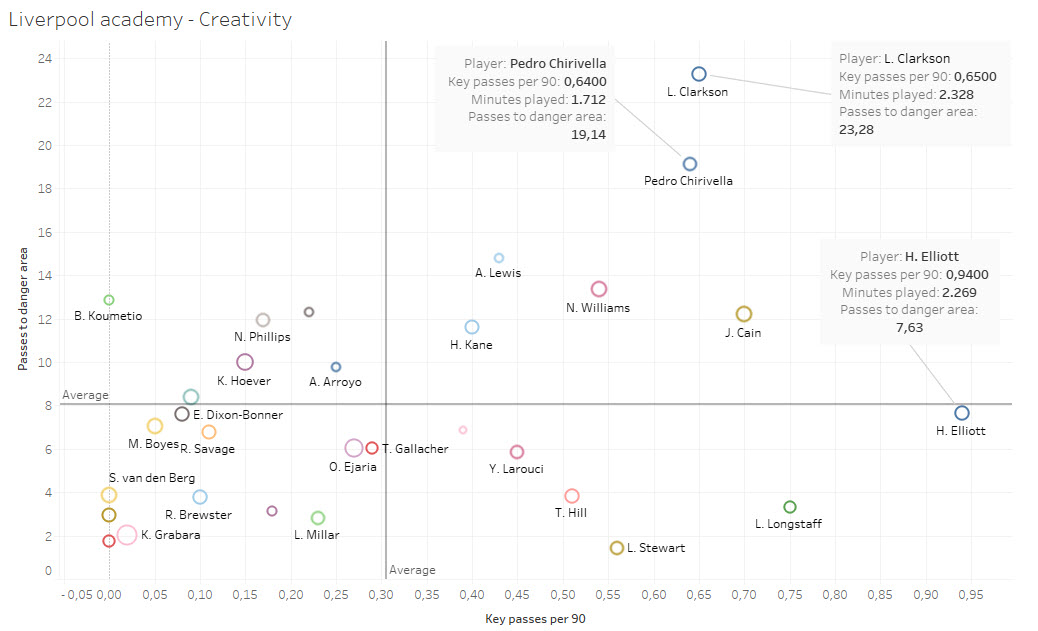 Once again, some players clearly stand out from the rest. For instance, the most impressive of the whole group seems to be the 18-year-old Leighton Clarkson with 23.28 passes into the danger area and 0.65 key passes per 90 minutes. Equally impressive is Pedro Chirivella with 19.14 and 0.64 respectively. Players like Jake Cain (12.20 vs 0.7) and Neco Williams (13.34 vs 0.54) should also not be disregarded.

But then we also have some familiar names and players who are highly creative but don’t tally as many passes into the danger area simply because they are positioned higher up the pitch and therefore don’t progress the ball that much. Elliott is the standout here as the player with the highest value for key passes, averaging 0.94 per 90 minutes. Similarly, Longstaff and Stewart are not far behind either with 0.75 and 0.56 respectively.

The final graph we’ll be using will focus on ball progression. To accurately judge a player’s ability to carry the ball, we’ll be taking a look at their progressive runs and dribbles per 90 minutes and that data should be able to tell us which players are adept at running with the ball and progressing play that way. 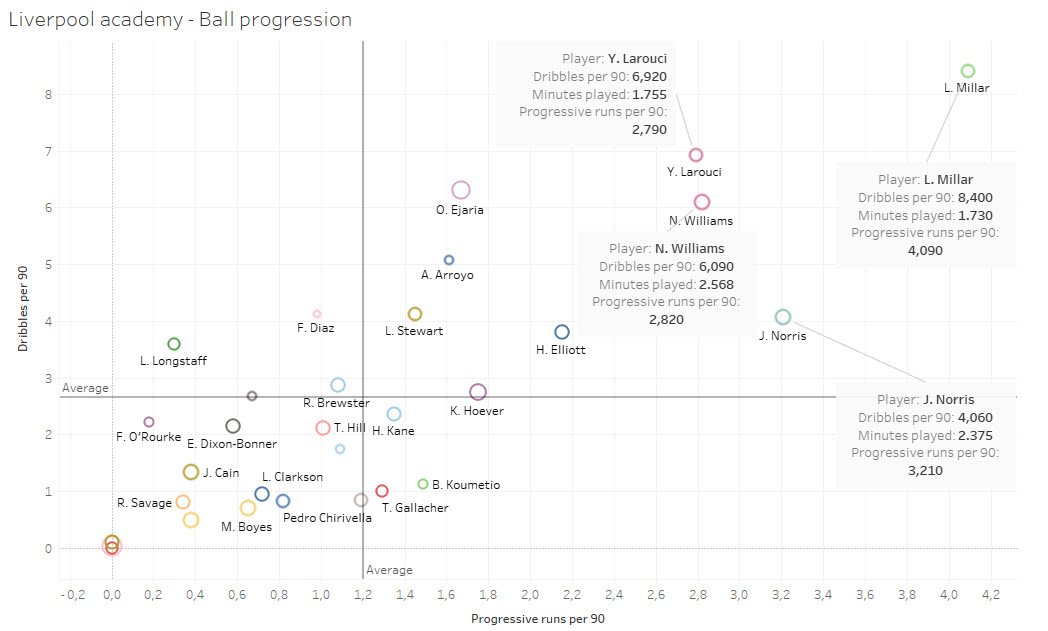 The 20-year-old Liam Millar is the standout performer in this scatter graph and his 8.4 dribbles and 4.09 progressive runs per 90 minutes eclipse the average, and the other players for that matter, by some distance. But he is not the only impressive player to feature here.

Williams and Elliott are also worth mentioning here as both can boast with above-average values in both metrics and are definitely worth keeping an eye on in the near future.

Elliott is already quite a familiar name in world football but he definitely warrants such a claim. The youngster is a highly creative forward whose main attributes lie in deploying key passes. With 0.94 per 90 minutes, he is the most prolific player in that category on this shortlist. But with 7.63 passes into the danger area and great 8.39 progressive actions per 90 minutes (progressive passes + progressive runs per 90), he is someone who can not only set his teammates up successfully but also drive the play forward with quality.

Even though the Longstaff name is popular because of other star players in the Premier League, Liverpool’s young talent is someone who could very well go on to do great things in the future. Not only does he deliver the second-best value in key passes with 0.75 per 90 minutes but he also excels in front of goal, tallying 0.71 goal contribution from 0.54 expected goal contribution per 90 minutes.

Naturally, for a player who likes to spend his time higher up the pitch, it doesn’t surprise that he averaged only 3.30 passes into the danger area and 6.36 progressive actions. But at 19 years of age, he has already experienced some senior football in his career and will be looking to progress further in the near future.

The 17-year-old forward is one to keep a close eye on. Stewart has an incredible presence in front of goal and eclipses the average values in both goal contributions and expected goal contributions, tallying 1.12 and 0.75 per 90 minutes respectively. Even though he is not the one to drop extremely deep on the pitch and then progress the play, his 0.56 key passes per 90 minutes do suggest he has a certain dose of creativity in his locker.

Developing his skill set and ensuring he irons out his arsenal could prove to be an incredible asset for the Reds further down the line.

Hill is another midfield prospect who’s tallying some impressive statistics for one of Liverpool’s younger development squads. But the youngster has been deployed both as a centre-forward and a winger throughout the season. With that being said, both his goal contribution of 0.78 and expected goal contribution of 0.67 per 90 minutes indicate that he has a keen eye for rattling the inside of the opposition’s net, either by assisting or putting the final touches himself.

But it’s also his ability to direct the play forward, deploying 3.84 passes into the danger area and 4.24 progressive actions, which is still a decent figure for someone positioned higher up the pitch, that makes him stand out. And at only 17 years of age, Hill seems to be well on his way to turn into a potential key player of the future.

The only defensive-minded player on this list is Leighton Clarkson. We’ve decided to include him due to his incredible ability to orchestrate play and progress it forward. With 23.28 passes into the danger area and 15.11 progressive actions per 90 minutes, the 18-year-old is more than capable to advance the ball and link the thirds successfully.

Naturally, his goal contribution values are much lower than that of his other highlighted peers but Clarkson still possesses a clear dose of creativity with 0.65 key passes per 90 minutes, suggesting he could be further groomed into a deep-lying playmaker for the team.

All five players that we have highlighted seem to have the potential to develop into excellent players but they are not nearly the only ones who have the foundation to succeed. The likes of Neco Williams, Pedro Chirivella and Liam Millar are one of the other creative progressors that could also warrant a shout but this time, the focus was mostly on the best and creative goal contributors, Clarkson being an obvious exception on the list.

The next step in our tactical analysis will be to do an in-depth scout report on each of the highlighted players, putting the data into the much-needed context to see whether they also pass the eye-test. The numbers suggest the academy is rich with talent but our search does not stop here.