Round two of Sir Alex Ferguson vs Marcelo Bielsa! Yesterday, we analysed the first leg of the UEFA Europa League clash between Manchester United and Athletic Bilbao. United had a disappointing 2-3 loss at the Old Trafford, which meant they would have to win with at least a two-goal margin or score more than three goals at the San Mamés.

In this tactical analysis, we will reveal how Bielsa’s tactics once again helped his team beat Manchester United. Despite Ferguson attempting to cover the loopholes which appeared in the first leg, the weaknesses of the Red Devils were still exploited by the Argentine coach and they lost 3-5 in aggregate.

Once again, Bielsa played a very young and energetic team – the average age was 24.6 only. Players such as Llorente and Muniain gave United a very difficult time in the first leg. Although Llorente was replaced by Gaizka Toquero at the 40th minute because of an injury, Bilbao still managed to register 18 shots, 14 more than United’s four.

Ferguson played his stronger team to challenge the Basque team. Compared to the previous clash, regular and experienced starters such as Ferdinand and Carrick returned to the squad. However, the relatively old lineup was a problem, as the team’s average age was 27.4, and part of the tactics was sacrificed as we will explain in this analysis.

In the previous game, the first phase of United’s attack was disrupted heavily because of Bilbao’s intensive pressing. The centre-backs were forced to carry the ball forward under pressure, hence why they were unable to find the optimal progressive option. This was the issue that Ferguson was trying to solve in this match, as the setups were different and a more aggressive approach was adopted.

In the hopes of manipulating the Bilbao wingers, both United full-backs pushed high and wide to increase distances between the oppositions. Also, the sole pivot Carrick was utilised to form a passing triangle with the centre-backs. Even when Bilbao committed another midfielder to man-mark Carrick, United still enjoyed a 3 v 2 numerical superiority. Furthermore, the centre-backs split to the half-spaces, where they could find wider passing lanes and more options.

These setups helped United to gain 50% of possession in this game, more than the last game’s 45% as they could not circulate the ball comfortably at the Old Trafford.

The following image illustrated the gist of their setups. We divided the vertical zones, clearly showing that both Bilbao wingers were forced to stay deep because of the positionings of Rafael and Evra. Meanwhile, the centre-backs positioned themselves in the half-spaces, and because Carrick’s positioning had manipulated the highest midfielder of Bilbao, wide vertical passing lanes were opened.

Furthermore, despite Llorente’s attempts to press, he could only approach either centre-back. Without the support from his teammates, the forward couldn’t cut the defence into half as he did in the first leg. As a result, the ball-carrying centre-back was free from pressure to pick his options. 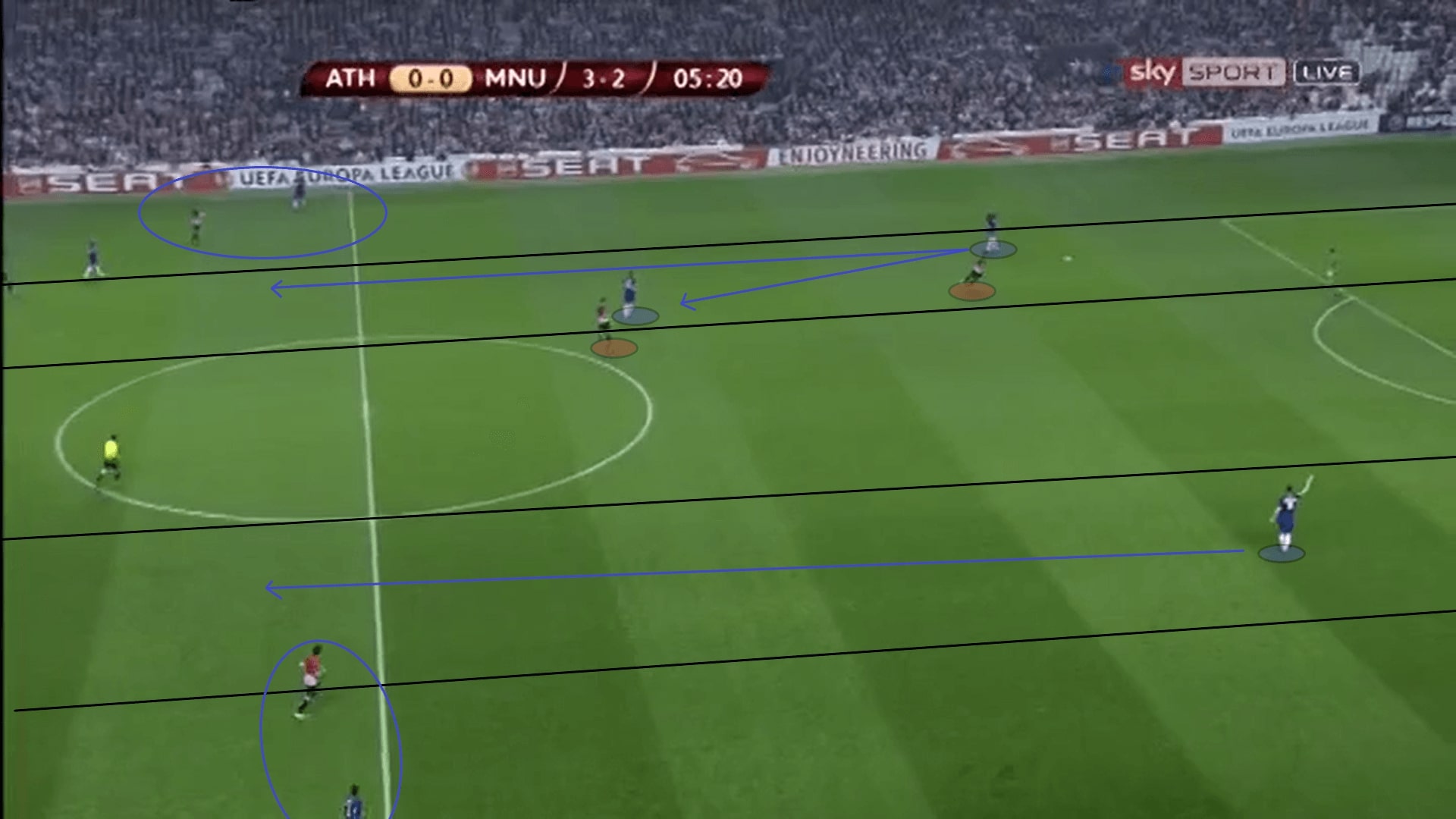 However, the poor number of shot attempts (four only) also reflected their sluggish performance after reaching the final third. Similar to the last game, United still tried to create space through rotations of players, and this was done by Giggs and Rooney, or even Park, roaming their positions.

And yet, this was ineffective because of the following reasons. Firstly, the left-winger Young was very predictable on the ball. His only move was to cut inside, therefore, he was easy to defend. The full-backs Rafael and Evra lacked sufficient pace, crossing ability, and physical quality to exploit the 1 v 1 opportunities in the wide areas. Also, Bilbao maintained a certain level of pressure, as United were not quick enough to exploit the superiority situations to create chances.

The following image demonstrates the rotations of United. When the Red Devils were building the attack at a flank, Park began his forward run to push the defence deeper. This generated space at zone 14 after the defender left to track the South Korean international. This was the opportunity for Rooney to drop and receive the pass, and it also isolated Iraola against Young. Although the intention of these movements was good, the execution was suboptimal and the ball was intercepted. 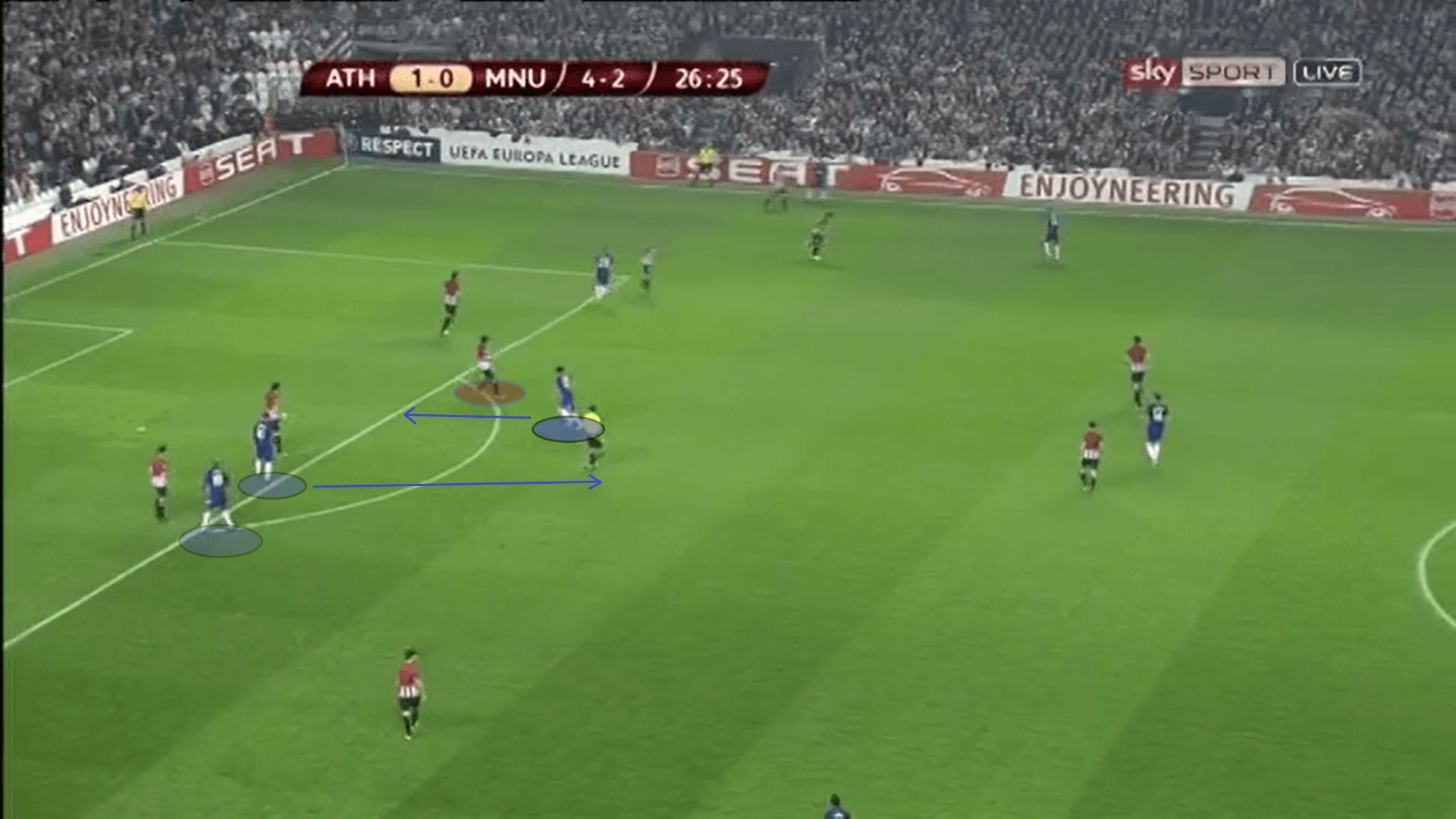 The intensity and instant pressure

This game was a little bit unlike Bielsa’s usual team since Bilbao lacked an intensive press high up on the pitch. However, United were unable to develop meaningful chances even though they tried progressing the ball because of the home team’s instant pressure. Since the distances of the progressive passes were large, the markers could easily track the targets and kept them back-to-goal. As a result, what came after the progressive passes were the wall passes or they made it difficult for holding off against the defence.

Despite the wingers being manipulated by the United full-backs, their midfielders were committed to the defensive duties. The pressure was imminent when the pass was made in the central areas. Taking the below image as an example, the young players of Bilbao had strong abilities to access their targets. Even though initially the dropping player received the ball with some space, his extra touches nullified this slight advantage and was forced into a duel. 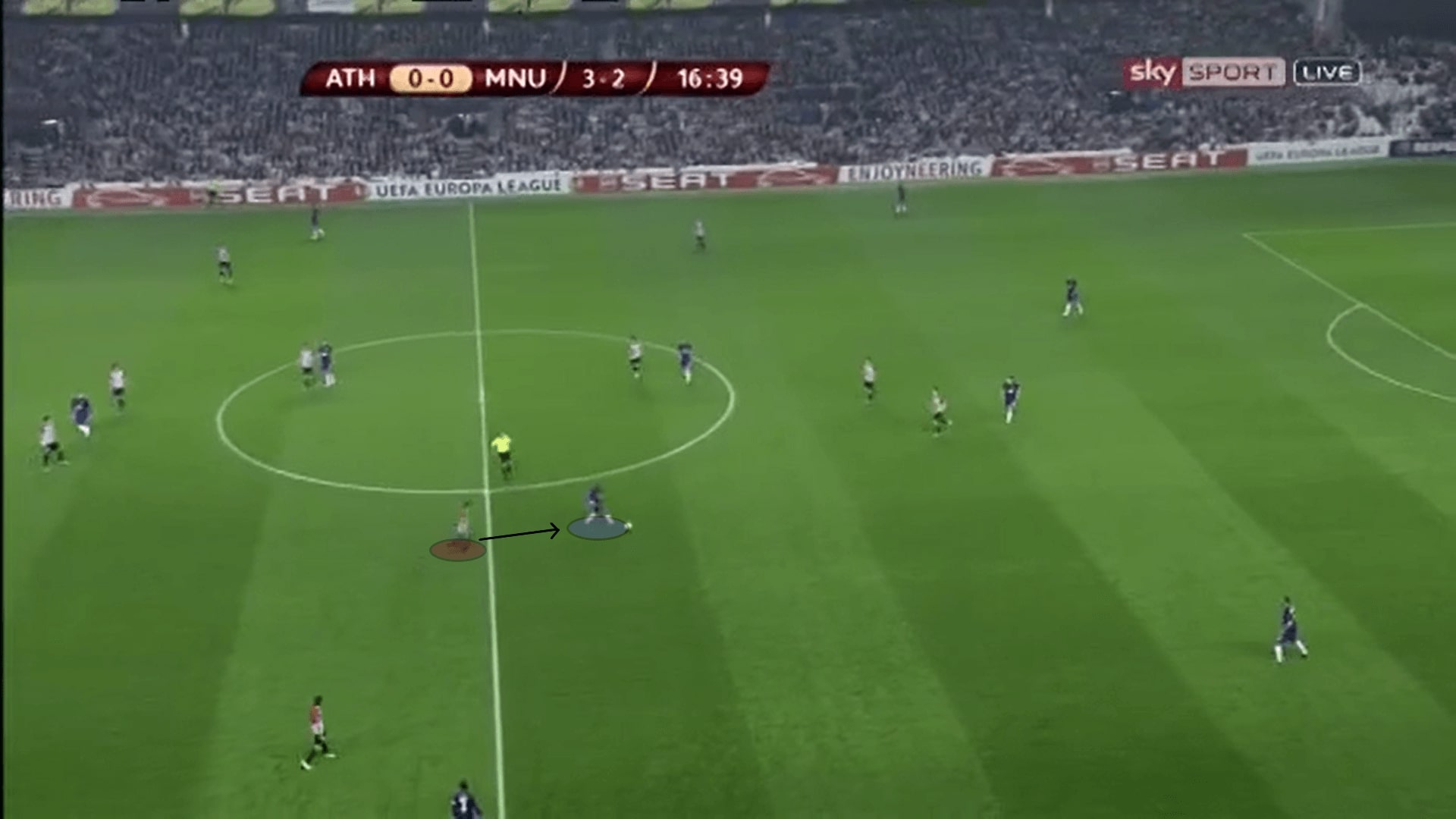 Bilbao took this game physically as well. In terms of physical strength and pace, the Basque team were better than United. Therefore, even when United discovered opportunities to potentially exploit the spaces behind the defenders, they could barely find success.

In the 1 v 1 situations, United suffered because the challenge intensity was high. The receiver could merely hold off against pressure from his back and missed the moment to progress optimally. For example, Young could have played a simple touch to release Evra when the left-back passed him, but the pressure from Iraola delayed the best timing to pass, and the ball had to circulate through the centre-backs again. 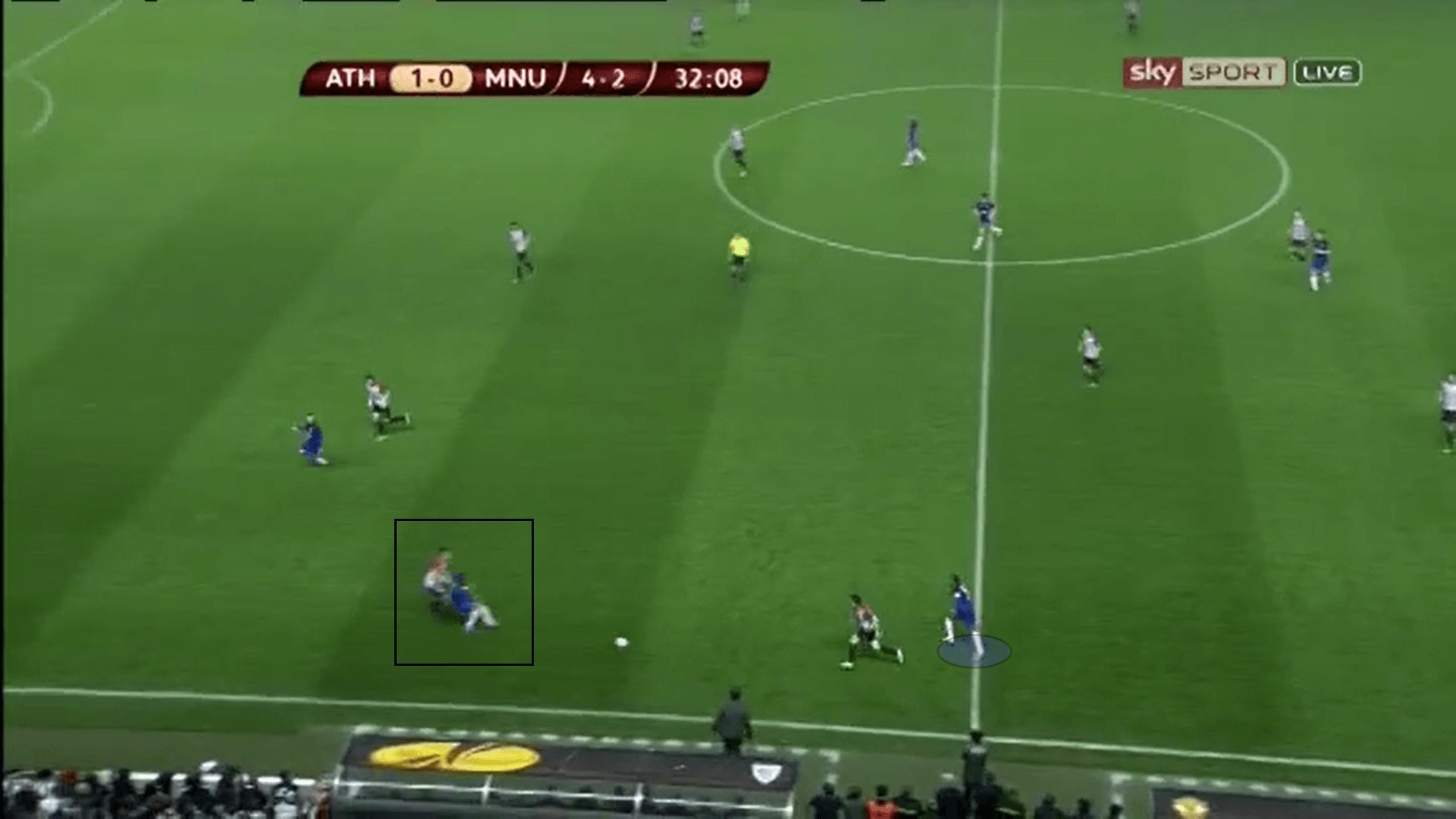 As mentioned, part of the tactics was sacrificed because of the limitations of individuals. Giggs, aged 37 in 2012, found it impossible to cover huge distances and sprint during the press. Individuals at the backline also lacked the pace to compete with the opposition when playing a high line. Because of the above issues, despite United trying hard to press high, the effects were limited because of the structural issues.

In general, the Red Devils were defending in a 4-4-2, with the first line formed by Rooney and Giggs. Since Ferguson did not want Bilbao to exploit spaces between the lines through Llorente’s lay-offs, his full-backs were more conservative in this game. Although Evra had to step out to cover space in the midfield on some occasions, in general, the press was an imbalanced one – loose and lacking in intensity.

The following image highlighted the major issue of the press. When United committed the players to press high, merely placing Carrick behind the pressing players was insufficient. The team lacked control of horizontal spaces in the central third, hence why those areas were occupied two Bilbao players. Fortunately, these spaces were not fully utilised by Bilbao as they were more direct by getting past the defensive line. 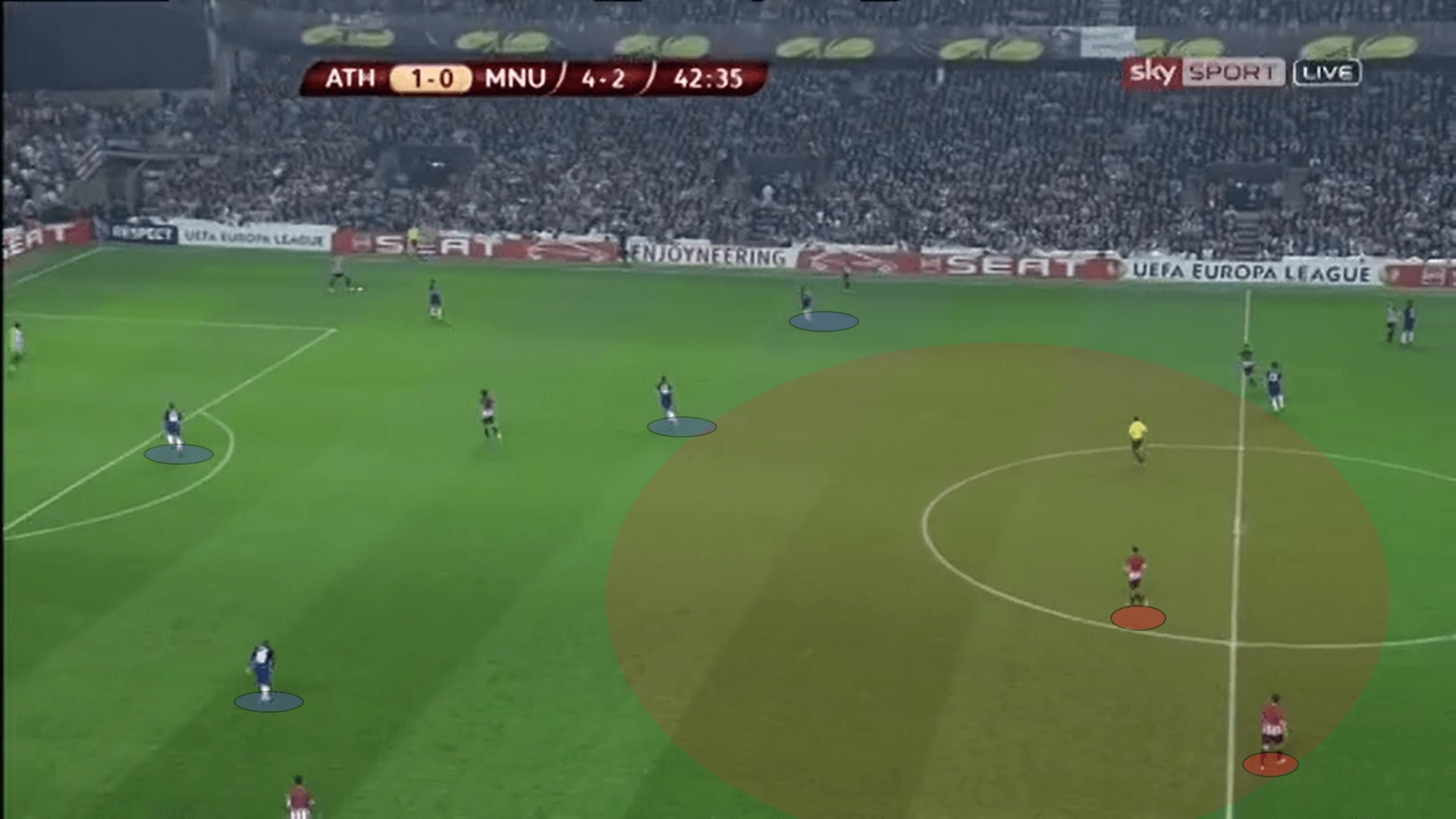 Also, pressure on the ball was insufficient. This allowed Bilbao to circulate the ball without tremendous pressure, so the process was easy and even when United trapped the ball in the flank, the impact was negligible. The Bilbao players had too many instances to perceive information on the pitch and execute their ideas.

For example, United reached numerical equality in the flank in the below image. They had a slight advantage as the ball was wide and options were limited. However, since there was no pressure on the wide player and no support from the right-back, the out-ball was played easily. 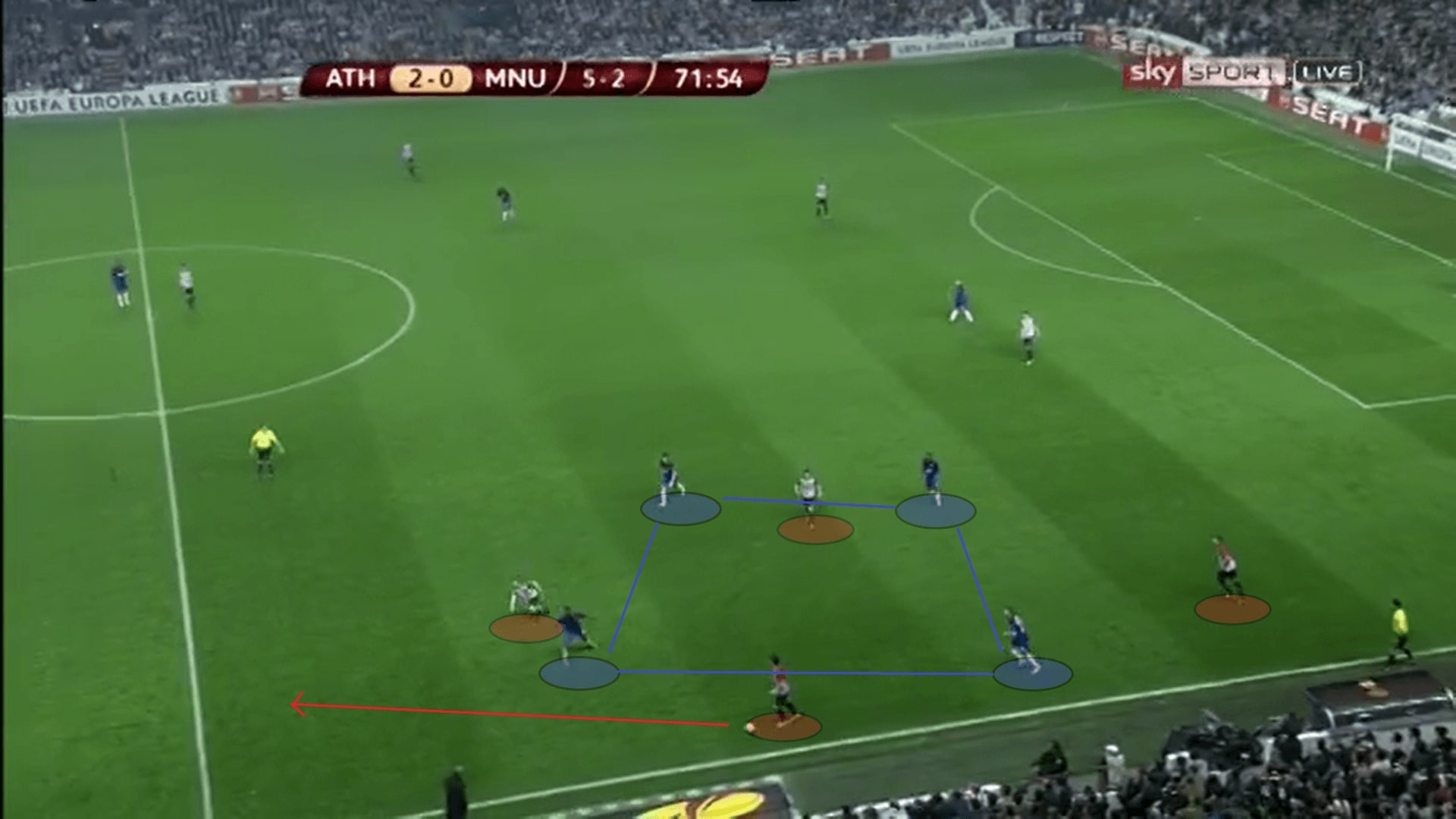 You could see the other three players were staying away from the teammates on the far side. The press was highly imbalanced and the central areas were unprotected. This became the loophole for Bilbao’s attack to progress. Since there was no pressure from the above image, the ball was easily played to the player who was running in the half-spaces.

When the attack was further progressed, this showed the adverse effects of the vacuum in the midfield. The approaching angle to the ball was limited, and as Paul Pogba and Park were far behind him, Rafael was not close enough to access him. Furthermore, there was a huge space available in the centre for the player to carry the ball into. 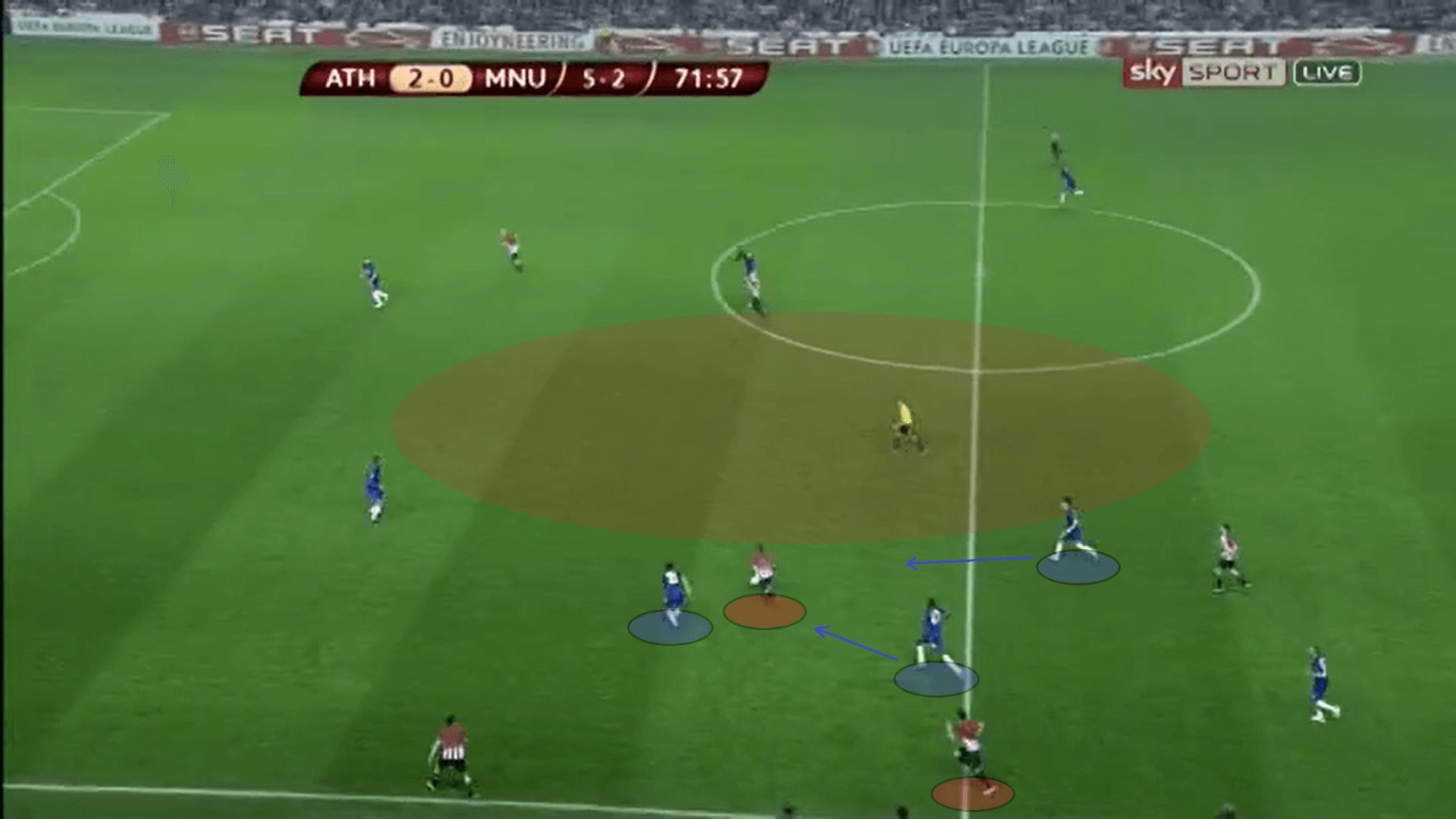 Vulnerability in the wide areas

Escaping from United’s press was not the best method to generate chances that night. Instead, what exposed the fragility of United’s defence was the space behind the full-backs. Since United needed two or more goals, both Evra and Rafael pushed quite high. During the transitions, the areas were uncovered, and Bilbao fully exploited these areas to create chances.

We highlighted spaces behind Evra and Rafael when Bilbao started the counter-attack. This was a very dangerous 2 v 2 case as the centre-backs had to cover huge spaces, very passively reacting to the attacking players’ runs. 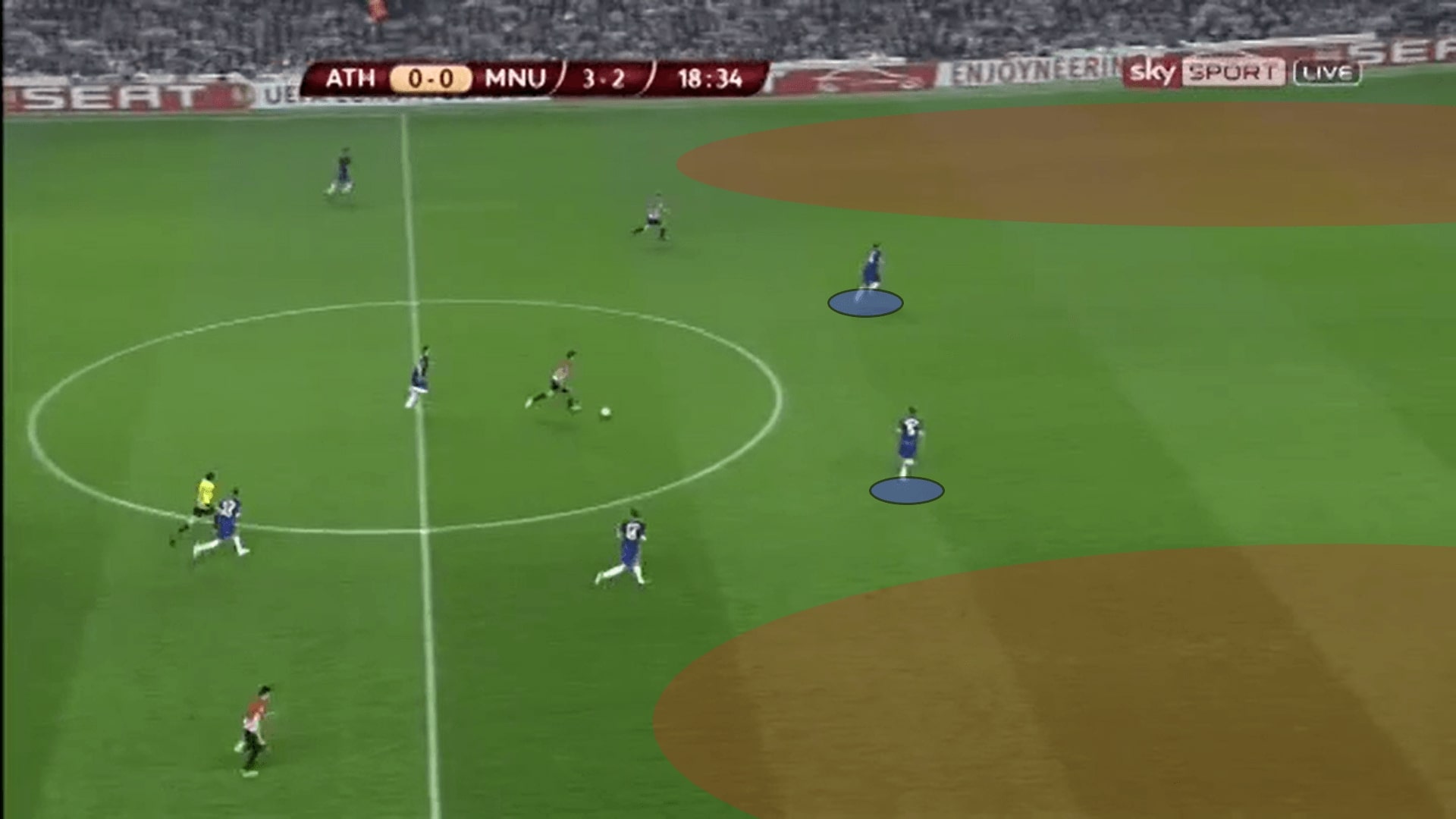 The above counter-attack could not develop into a shooting chance because of the poorly executed pass in the final third. However, the same issues kept appearing throughout the game and it cost another goal to be conceded. On many occasions, the centre-backs were pinned by the frontman of Bilbao, and they were unable to leave their position to cover Evra. Carrick lacked the mobility to access the player or the cost was too high to cover Evra by giving up the central areas.

The below image was the scenario before the goal from De Marcos. Evra was out of position as he lost the ball high in the attack. Again, pressure on the ball was weak, the ball-carrier could easily pick his target behind Evra to access the final third. 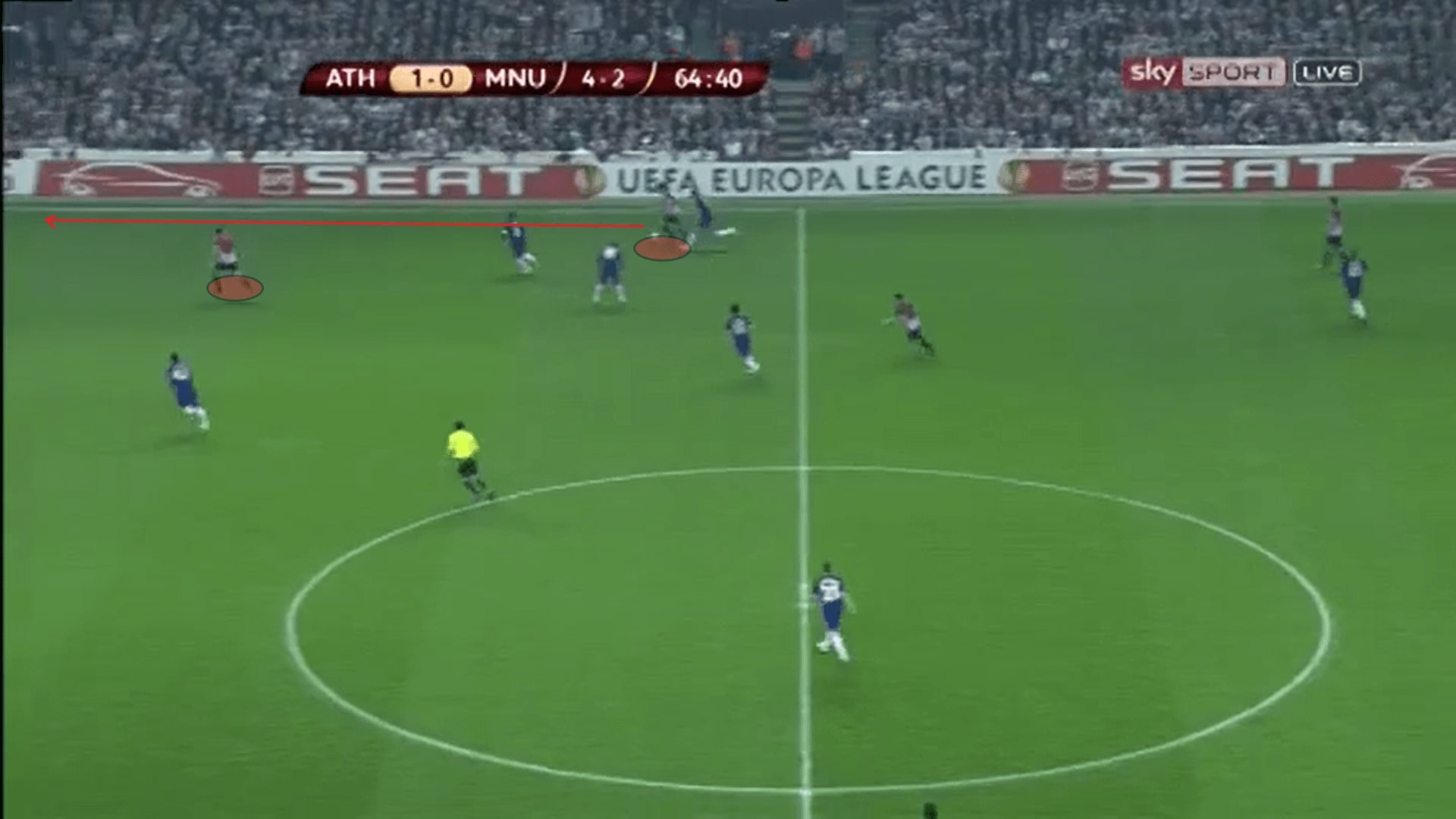 When Bilbao’s attack progressed and United tried to deny with a low block, issues arose and Ferguson’s men were in a dilemma. In the hopes of controlling Llorente, the back four stayed more compact while Young covered the wide areas for Evra. However, the team was defending in a 4-4-2, so there was a numerical deficit in the centre.

The whole situation gave Young hard decisions to make. If the former Aston Villa man tracked Iraola’s run and dropped to the defence, Bilbao then progressed easily because of the numerical advantage centrally. If he protected the midfield with Carrick, then Iraola was free to cross and this would be catastrophic because of Llorente’s aerial dominance. 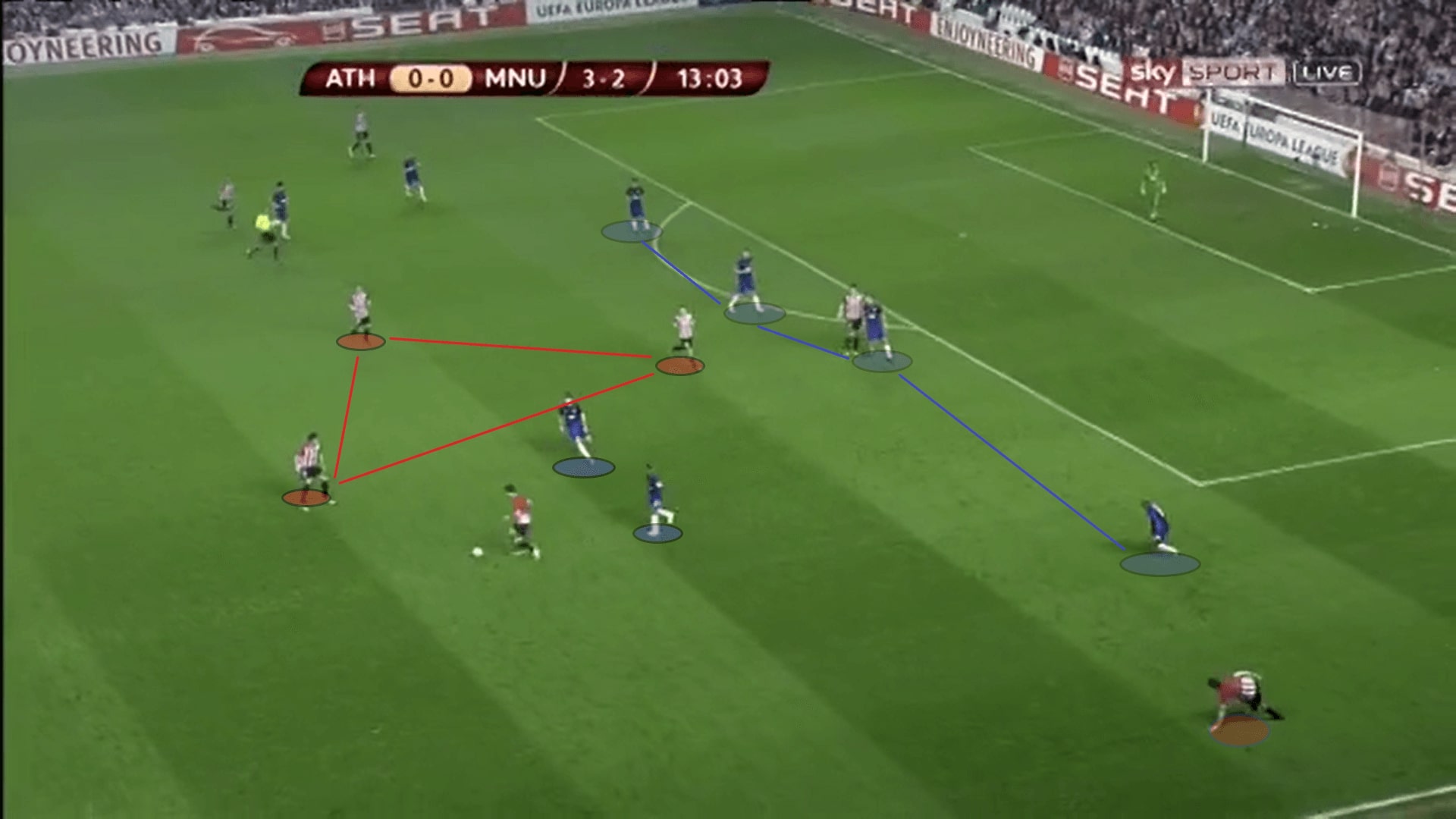 The defensive awareness of United midfielders to track runs was weak so this gave Bilbao a lot of chances to make forward runs. In this example, Young did not cover the wide areas for Evra so the Frenchman had to leave.

At the meantime, despite reaching numerical equality at the centre, the United defence was ball-watching and no communication was evidently made on the movements of the Bilbao player who made the forward run. As a result, the running player was easily found in the assist zone and United were in danger. 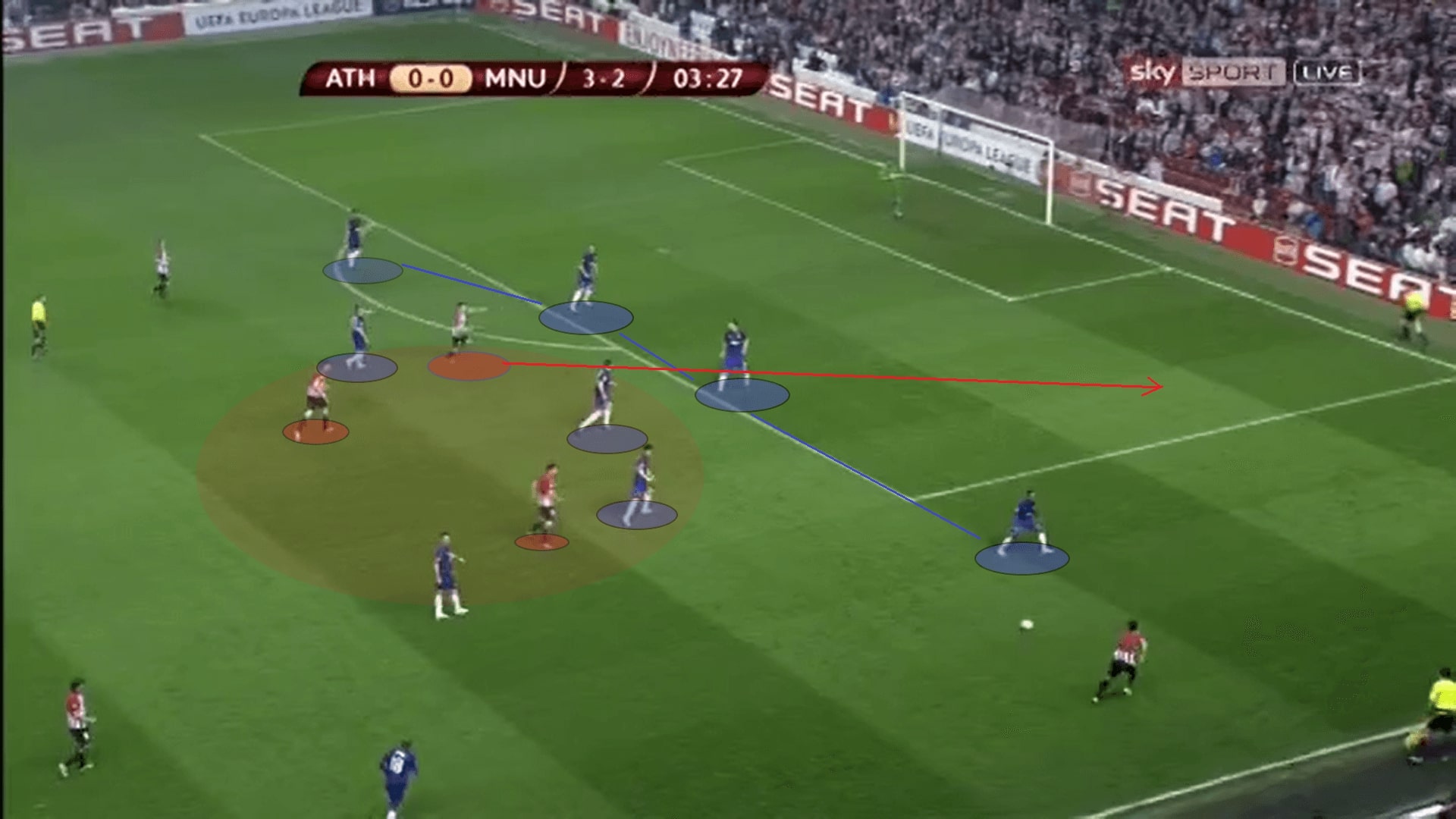 Bilbao fully deserved to progress to the next round as they performed really well in those two games. In fact, United were a bit fortunate to concede only five goals in these two legs as Bilbao had many more clear-cut chances wasted. Despite being more experienced, United were unable to deal with the young, energetic side of Bielsa. The home team defended with relentless effort to make the game difficult for United; offensively, they were doing well to exploit the structural issues of United’s 4-4-2 and spaces available at flanks.