Some teams score on the break, others after patient spells of possession; Newcastle, however, have a different gameplan. Despite their goal struggles this season – being joint-lowest scorers in the division on par with Norwich – Newcastle have been surprisingly successful at scoring from corners this season.

In this tactical analysis, we look into the statistics and a key routine implemented by the Magpies to analyse what makes them so successful when the ball goes behind.

Following my previous analysis of Man United‘s corners, I came across other interesting statistics which led me to write this article. Below is a goal typology chart showing each team’s number of goals scored by way of a corner. The goal frequencies are measured against the league average of 6.5 goals. The order of the teams is dictated by the number of corners taken by each team, starting with the highest at the top. 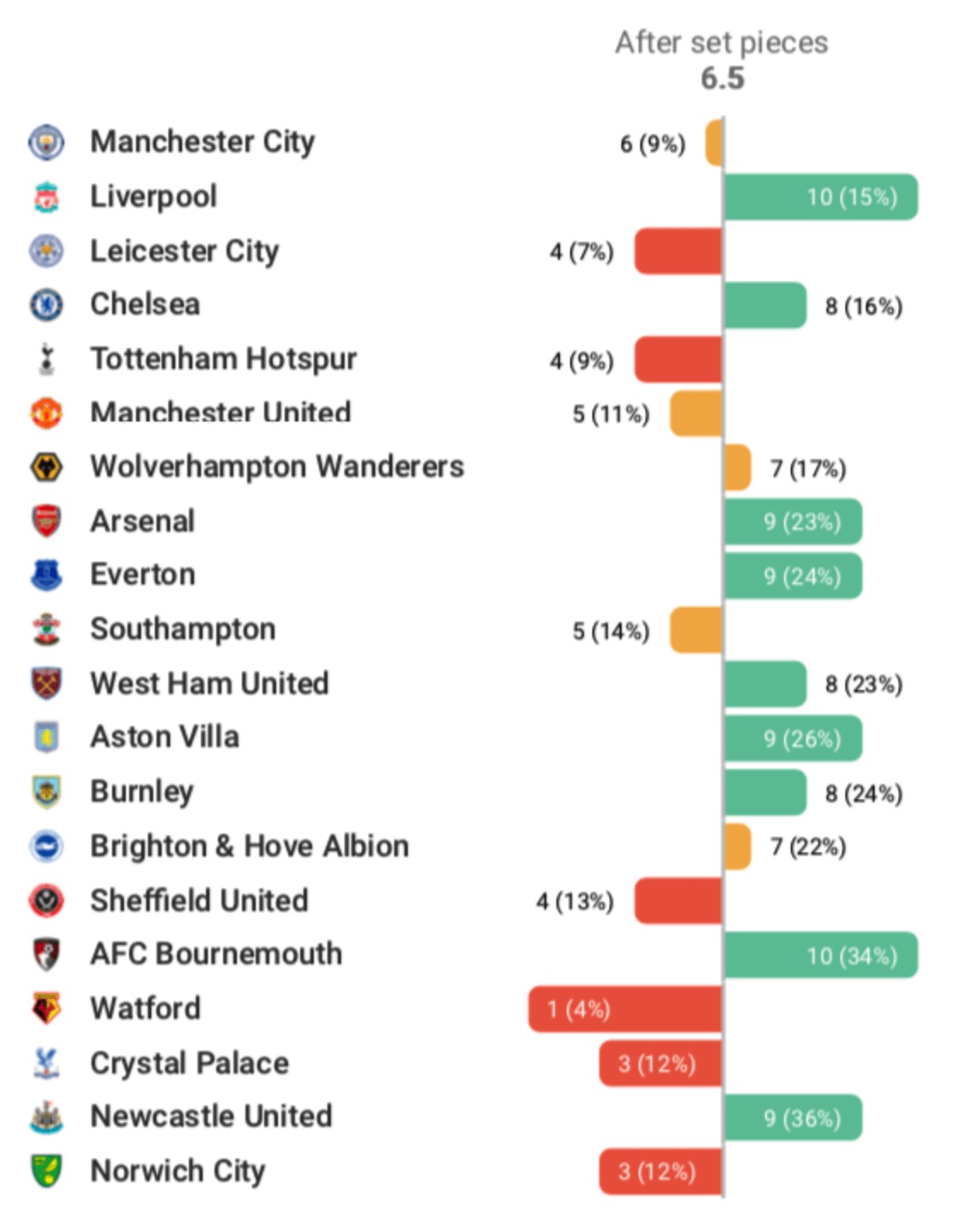 The initial reading of the chart looks promising for Newcastle who sit comfortably above the average with an impressive nine goals from corners this season. This is just one goal behind table-toppers Liverpool (10) and several above rivals Crystal Palace and Southampton, who both fall below the league average.

From the chart above we can also see that these nine goals scored by Steve Bruce’s men make up 36% of Newcastle’s goal total for the season. This is partly down to the lacklustre finishing shown by Newcastle forwards this year, but also indicates a reliance and focus on maximising scoring opportunities when corner kicks are won.

That leads onto the next observation, which isn’t immediately clear from the typology chart. We can see above that Newcastle are scoring well and are amongst the best when it comes to goals scored from corners, but where they really excel is in their efficiency rate, shown below. 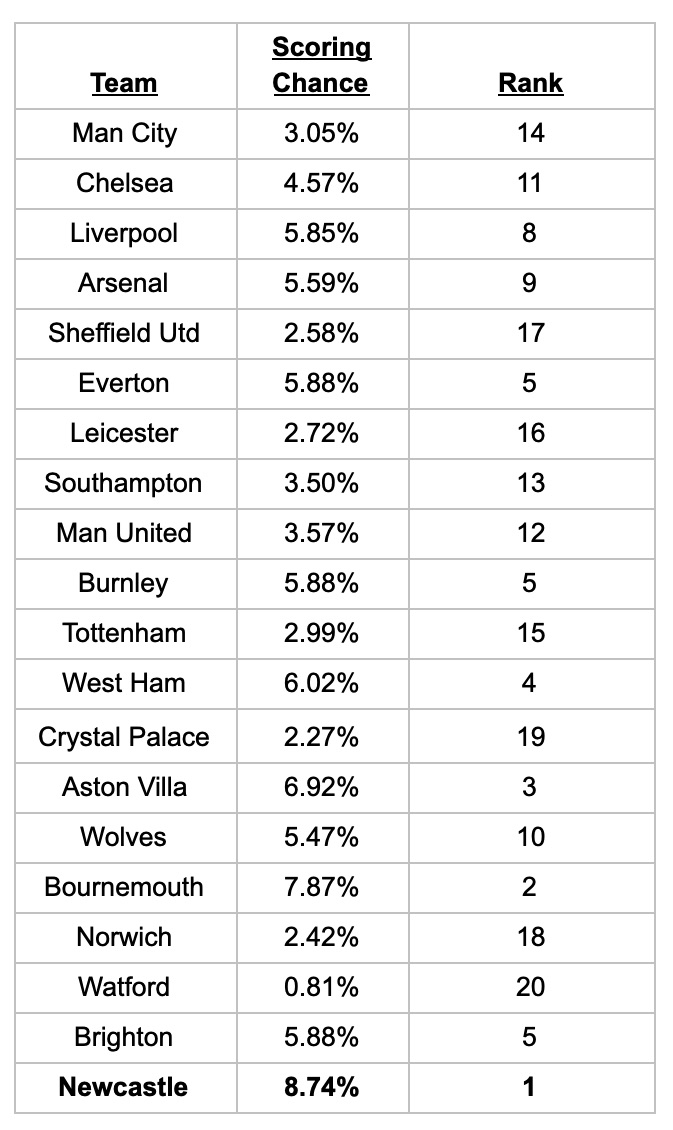 In the first graph, Newcastle are near the bottom of the list as they’ve taken just 103 corners this season. Compare that with the top, Man City, who have taken 197 corners – nearly double the Magpies. This makes Newcastle’s numbers even more impressive as we can see from the chart above, they are particularly efficient with their chance creation from corner kicks. Despite nearly, half the amount of corners than Man City, Newcastle are over double the effectiveness.
Steve Bruce’s men have a scoring rate of 8.74%, ranking them the highest in the league. This prolificness from their corners indicates a large portion of training time is spent on set-piece routines in order to maximise their effectiveness when they do eventually come around.
Logically this makes sense for a team who average the lowest possession in the league, a mere 38%. By almost completely removing the opportunity of scoring from attacking phases, Newcastle have reduced their focus to either scoring from incisive offensive transitions or from set-pieces. As a result, training sessions need to only centre around these two areas as anything else is wasteful and won’t appear as a real game scenario due to their tactics.

So far the Magpies have amassed a total of 1.39xG from the 17 shots their 103 corner kicks created. We can see from the visuals above that the Nort-East club have a fairly even distribution allocation, slightly favouring deliveries to the far post – 32 in total. This even(ish) spread of distribution may in part explain the success they’ve been enjoying. A more varied and unpredictable collection of set-piece routines makes it harder to predict and subsequently defend for the opposing team.

Despite being the xG leader, in actuality, Newcastle’s deliveries to the penalty area yield 0.085xG per attempt compared to 0.064xG earned from chances created from far post deliveries. This might be something worth looking at from an improvement perspective for Steve Bruce and his backroom staff.

After sifting through the corners taken by Steve Bruce’s men, I came across one frequently used routine that doesn’t make itself apparent in the statistics. This routine has been successful on numerous occasions this season and is something for opposition sides to take note of.

The corner routine starts with Newcastle setting up as above. They use four players clustered around the penalty spot. The two players closer to the goal adopt a more stationary stance which allows them to naturally (without fouling) be used as blockers for the two running players positioned slightly behind. These two start further from the goal, but on Jonjo Shelvey taking the kick, make sharp bursts towards the six-yard box.

Two players start on the edge of the penalty area, which we can see are marshalled by Bournemouth markers. One thing to note is that the tactic of using four players clustered around the penalty spot opens space towards the back post as highlighted. Bournemouth have done nothing extraordinary from a defensive viewpoint, marking man-to-man for the runners and zonal across the six-yard box. They’ve also spotted the additional man close to the kick taker and prevented a 2v1 occurring from a short corner.

Instead of crossing into the box, Shelvey uses Allan Saint-Maximin who has dropped short to give the short corner option. Meanwhile, notice in the box how the four Newcastle players have dragged the Bournemouth defenders towards the near post with their runs, opening up a bigger space in the far post region.

Within split seconds of the pass being played, Miguel Almirón has begun to peel off, creating distance from his marker who we can see is distracted by the short corner. Using Almirón in this position is no coincidence as the Paraguayan possesses explosive acceleration which is key to the next phase.

Saint-Maximin drops the ball off to a third player in support after pulling the Bournemouth defenders tight into a two vs two on the flank. Again, using the Frenchman in this situation is no coincidence either. His ability in tight spaces and confidence on the ball allows him to hold onto the ball for as long as possible in order to create space for his teammate to deliver.

The next sequence splits into two alternate possibilities, which I have included to show how teams have tried to react differently to this routine. The first carries on in this match, where the Bournemouth defender attempts to follow Almirón’s run the entire way.

In doing so, the marker disrupts the shape of the defensive line as it is trying to push out with each backward pass played by Newcastle. By following the run back with Almirón, having been caught unaware, the defender inadvertently drops the offside line to just outside the six-yard box, with his other defenders now positioned ahead of him and in a rugged shape.

This is an added benefit to the routine as it keeps the defenders on top of their goalkeeper and disrupts the defensive line. In this scenario Newcastle’s initial cross is poor and loops into the penalty area, allowing Almirón’s marker to catch up. However, as mentioned, doing so, leaves gaps for the Newcastle attackers to penetrate in behind. The second ball is won by Newcastle and poked home by Ciaran Clark who is onside due to the defender’s panicked, reactionary recovery run back.

The second outcome comes from the defensive side’s attempt to hold their line on the edge of the box, in order to avoid the scenario above.

The same routine is used against West Ham, however, as mentioned the marker doesn’t breach his penalty area in an attempt to catch the Newcastle runner offside.

Though I prefer this aggressive defensive approach compared to complete defensive disorganisation, the tactic has some deficiencies. Firstly, with the routine being so well drilled, Newcastle are able to time the delivery to near perfection and in doing so, have an immediate advantage over the recovering defenders.

The high line also abandons the man-to-man marking system, which allows Newcastle to overload the far post. This means any delivery in the vicinity of the open space will likely be met by a black-and-white head. The delivery above puts the goalkeeper in a difficult situation of whether to stay on his line and be forced into a save or come fore the cross to rescue the situation.

In the end, Roberto Jiménez reacts late and loses the race to the ball as it is gently headed passed him and into an empty net. Commentators will have blamed the Spanish keeper however as we’ve seen there was a lot of thought behind this well-worked move to him in this tricky spot. 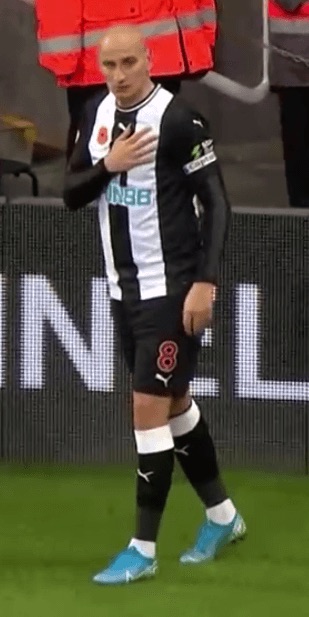 Both scenarios result in Newcastle scoring and it’s a routine that’s been successful for them all season. They have tailored the routine to exploit each involved player’s attributes, giving them an advantage in this short, impactful sequence.

As we’ve seen, defending against the routine is difficult regardless of your preferred approach. One noticeable tell that might allow for a few extra seconds of defensive organisation is the taker using their right arm to pad their chest as above. This happened on two occasions before the routine was performed.

From this set-piece analysis, we’ve seen that teams should be wary of giving away cheap corners against Newcastle. With an 8.74% conversion rate, the Magpies have put themselves top of the league in terms of deadliness from these set pieces.

This comes at a cost, however, as every minute on the training ground focussing on set-pieces could be spent improving other areas to help them improve their goal tally. For now, the dependence on these routines is working, but with such a heavy reliance you can’t help but feel that being so one dimensional will eventually catch up with the North East club. 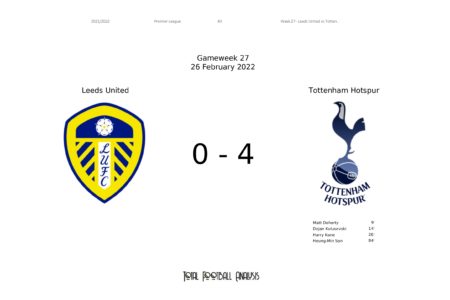 Saturday lunchtime saw Tottenham increase the relegation pressure on Leeds in the Premier League. We’ve broken down all the key […] 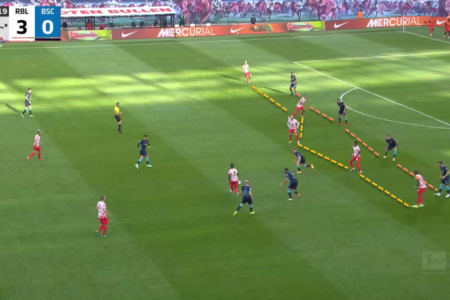 Jesse Marsch at Leeds United 21/22: What the Premier League can expect from the new manager – tactical analysis

Jesse Marsch has taken over from Marcelo Bielsa as Head Coach of Leeds United. The American coach comes with a […]