The 2019/20 season in the NordicBet Liga is almost over. After the 30th round, Vejle increased their lead to nine points which means they will be promoted to the Superliga. Behind them, Viborg are getting ready for the relegation play-off hoping they can join the top-tier league in 2020/21.

In the first part of the data analysis, we focused on defensive players whose performance could generate interest in the Superliga. In this article, we will continue looking for the overperformers in the final third and go on an exciting adventure in Denmark.

First, we will go through the collective statistics to identify the best players at each position. To determine who is ready for the next level, we will compare NordicBet Liga players to a standard Superliga player in the same position. We are going to use radar charts based on percentile ranks as the 50th percentile will be our standard player reference point.

The 2.95 goals per game prove that the NordicBet Liga is a high-scoring league. If we look at the table, we can see that only one team, Naestved failed to score over 1 goal per game. The front three lead in goals scored, Viborg with 61, Vejle with 60 and Frederica with 57. It is also interesting to note that these teams scored a high proportion of their goals after set-pieces which are well-trained and emphasized across Danish clubs.

Despite dominating the league, Vejle rank seventh in all passes and fourth in ball possession as we find Nyköbing in the top two in both metrics despite them being close to relegation. This also shows the interesting nature of the NordicBet Liga but now let’s see what the individual analysis can tell us.

For the individual attacking contribution, we first analysed the numbers of successful attacking actions. Players with a high output would likely find success in the Superliga as well. Ivan Franjic, Diego Montiel and Reba Radei exceeded the average number by more than two times.

The advanced central midfielders put up great numbers in front of the goal with two of them scoring ten goals this season. Frederik Brandhof from Viborg Montiel from Vejle reached the magical 10. Players with less playing time racked up even stronger xG per 90 numbers. Dennis Höegh spent only 850 minutes on the pitch but almost had a 0.45 xG per game in that short time. In the assisting end, Montiel was also exceptional, making a case for himself as Midfielder of the Year. Behind him, Radei dished out six assists with a 0.22 xA per game.

Launching dangerous passes towards the attackers can define an all-round midfielder. In our case, dangerous pass ratio means that how many different passes (passes to penalty area, final third passes, deep completions etc.) a central midfielder tries which are then divided by forward passes. In the cover picture, we could see the full numbers, led by Franjic, just like in the successful attacking actions. Behind him, 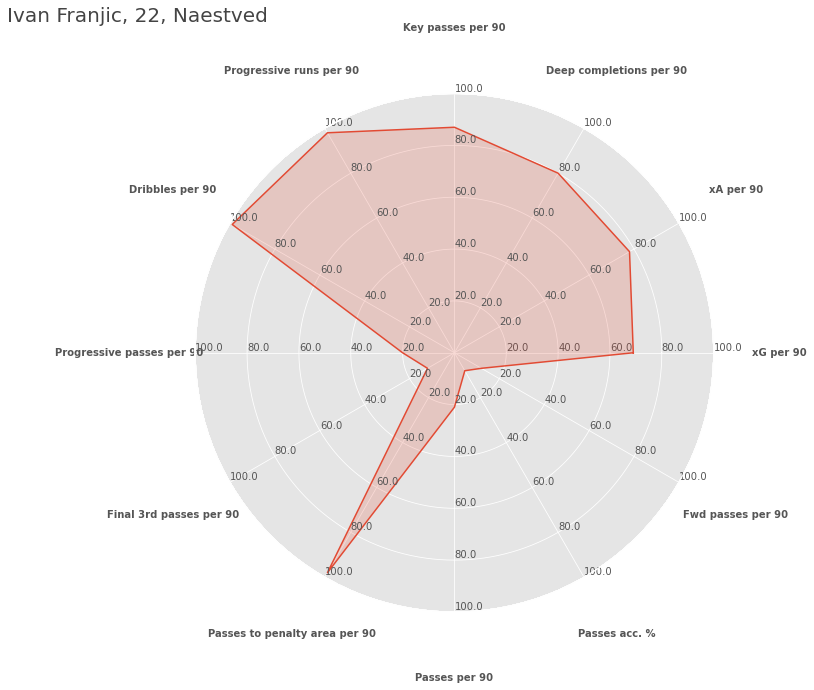 While Naestved might go down, we should see and hear about Ivan Franjic more next season. His general output wasn’t outstanding but his underlying statistics were just great. In a better team, he might become an important piece in the attack, while only being 22 years old. A creative midfielder is lacked in Odense where he could make a name for himself. 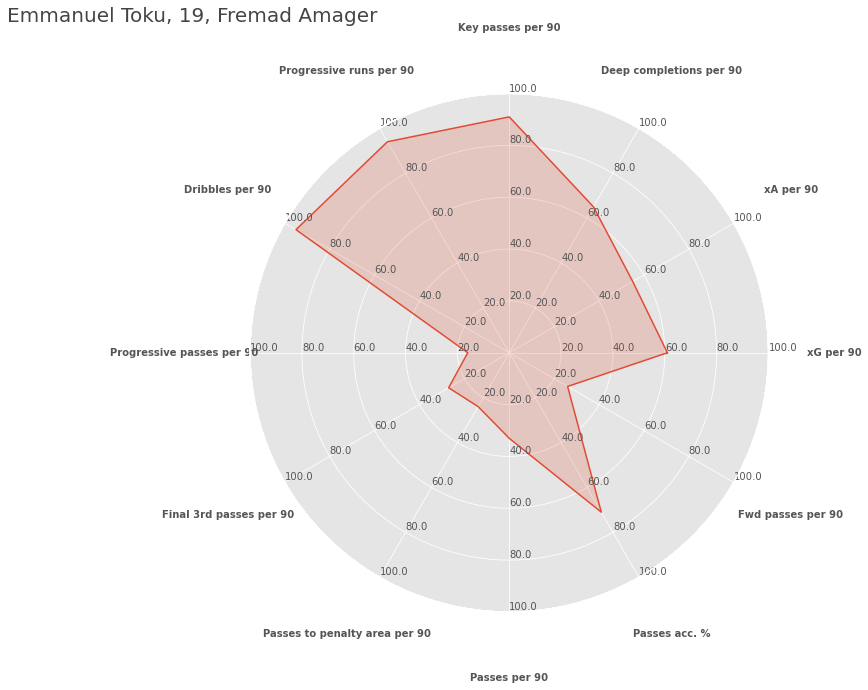 An even more wildcard pick could be Emmanuel Toku, a summer signing of Fremad Amager whose contract expires at the end of the season. He arrived from Boavista’s B team and while he only played 832 minutes, he did a great job adapting to the Danish football in his first year. Born in 2000, a great future could be ahead of the Ghanaian regardless of where he continues later. Just like in Franjic’s case, Toku was the most successful in those metrics which are less dependent on the team (progressive runs, dribbles).

As a first step, we should always profile the wingers we are analysing. Due to the changing nature of the beautiful game, traditional wingers are quickly replaced by inverted wingers, inside forwards even in smaller leagues. Their indicators of success are different, therefore it is important to decide who crosses more and who shoots more. The hypothesis, that these two metrics can help to determine the profiles, is proved with the xG and xA per 90 metrics. Players in the upper left corner are good inverted wingers while in the lower right, good traditional ones. We can find versatile athletes in the middle.

From here, we divide the winger analysis into two parts. The crucial element of the crossing wingers’ game is putting in quality crosses into the box. Deep completed crosses per 90 minutes is a good indicator of quality while we can see it is in relation to all crosses. Vejle’s Lucas Jensen and Kolding’s Denis Fazlagic lead in both metrics and their attacking contribution couldn’t be underrated. The 21-year-old Sebastian Buch Jensen was unlucky not to register any assists over the season despite having the best deep completed crosses ratio.

The expectation from inverted wingers is usually to cut inside from the flanks and either hand out defence-splitting passes to the strikers or finish the job by themselves. Nyköbing’s Sebastian Koch played on both wings in the club’s 4-3-3 formation with relative success. He scored six out of the team’s 45 goals and he could work well in another high-functioning attack next season as well. The 30-year old Anders Holvad reached a higher number in shots and the same number of goals from fewer touches in the box.

The previously mentioned players emerge on the top in the dangerous pass map with the addition of Magnus Warming (joined Lyngby in the Superliga over the winter) and the older of the Mucolli brothers, Agon. The complete left-winger scored seven and assisted five, showing that he is ready for a new challenge. 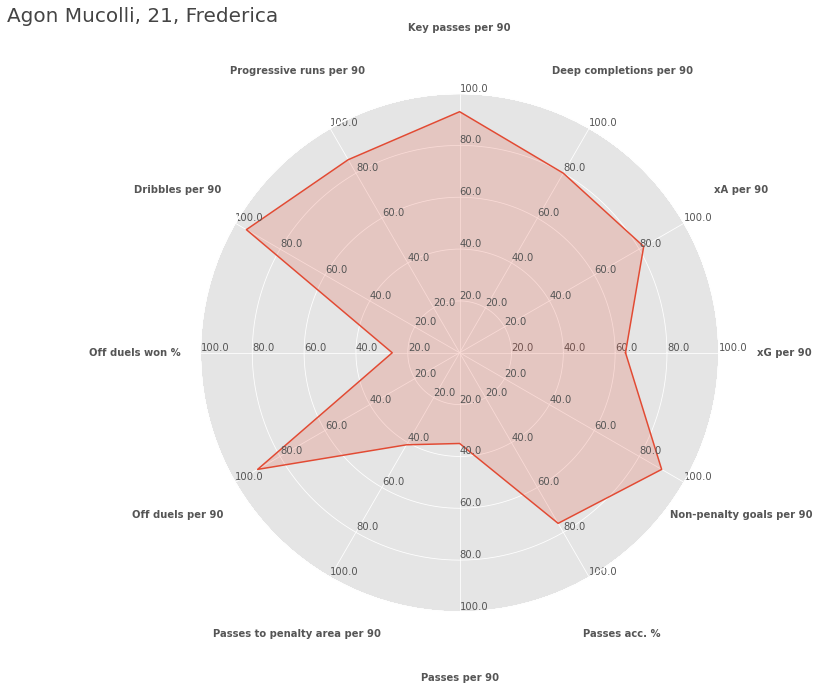 Agon Mucolli enjoyed a prosperous season at Frederica in the NordicBet Liga. The Albanian international could decide to take a step further and his club should look for buyers before a possible free transfer (as it is a common practice in Denmark). While the top clubs with similar style like Midtjylland, Nordsjaelland or Aarhus are stacked at the LW position, he could be a smart addition to improve any roster before the new season. 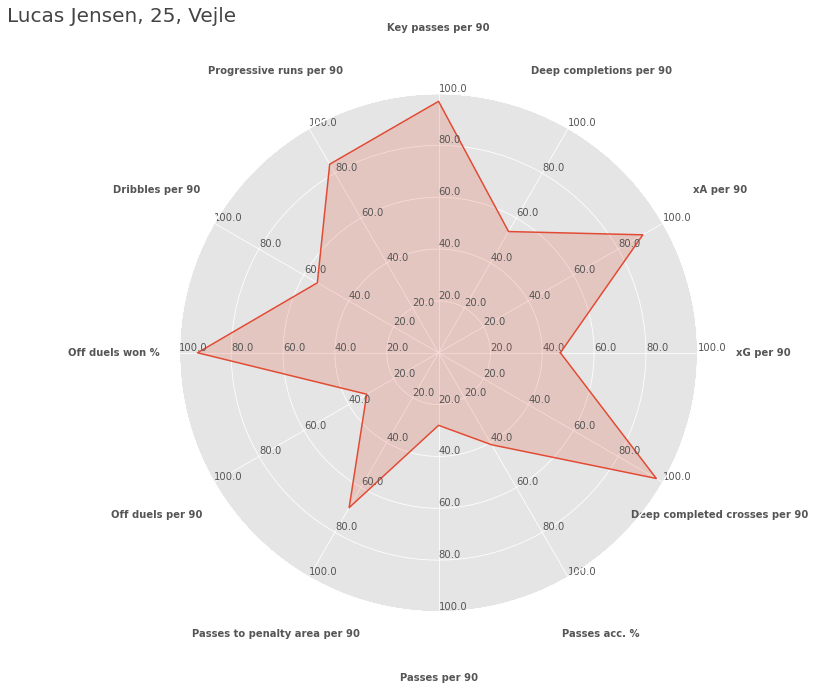 Lucas Jensen, the 25-year-old journeyman, seems to find his match at his fifth club. Getting back to the Superliga could mean that he can showcase his talents. As the radar shows, he could be a successful chance creator also in the top league if Vejle continued to rely on his crosses from the right-wing.

We have witnessed some outstanding performances in the NordicBet Liga in front of the goal. The most prolific strikers were Martin Koch Helsted (17 goals), Kjartan Finnbogasson (16) and Kristoffer Munksgaard (12), all experienced and lethal finishers. The non-penalty goals per 90 chart tells us a different story with Kolding’s Jeppe Hansen being in the middle (in front) of the pack. The highest-ranked young forward in this comparison is Mileta Rajovic, Roskilde’s 20-year-old player.

Considering the physical nature of the Superliga, strikers have to be ready for the challenge of constant battles against the centre-backs. Therefore, we aimed to visualize the ‘capability of duels’, winning aerial and withstanding offensive duels for a full 90 minutes. Wessam Abou Ali, Younes Bakiz and Sebastian Czajkowski are all young, strong forwards. Out of them, Ali and Bakiz can win an above-average number of aerial duels in the league, a metric led by two-metre tall Mathias Kristensen.

In terms of quality, we examined two calculated metrics as well. Especially ‘xG per shots on target’ can show us with what these strikers could work all season long. Monday Etim had an almost 0.8 xG when hitting the target, however, this adjusted metric shows that there is room for improvement as he only scored twice. On the other hand, Kristensen’s 0.22 xG per shots on target stemmed from headers but he still netted nine times this season. 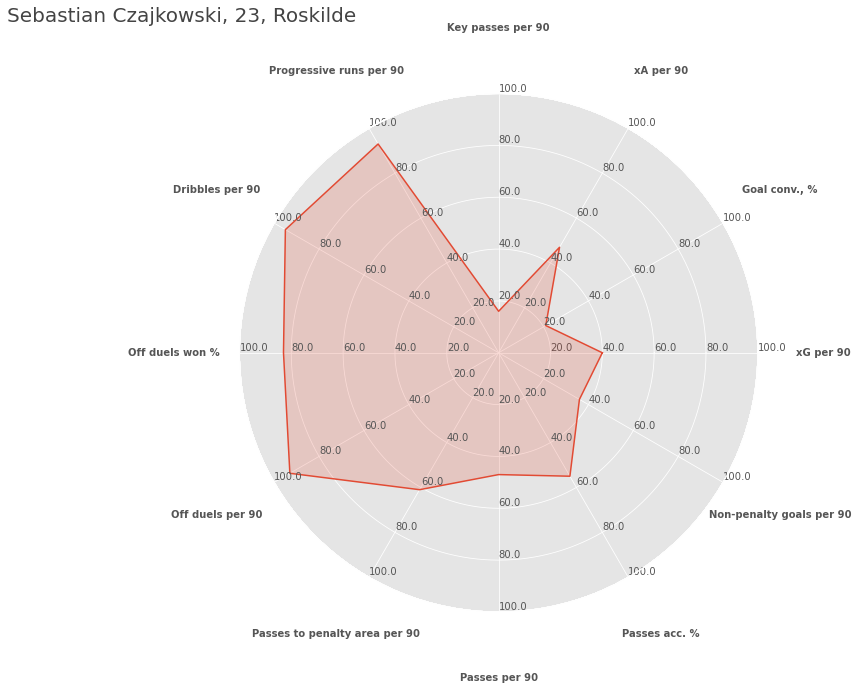 It is hard to pick a young talent who could perform consistently in the top league. Instead, we are going with picks who could give extra depth for a Superliga team. Sebastian Czajkowski appeared high on the charts but on the radar, he definitely seems more of a withdrawn forward who can assist his teammates. Paired up with a strong finisher, he could be a valuable asset for any team. 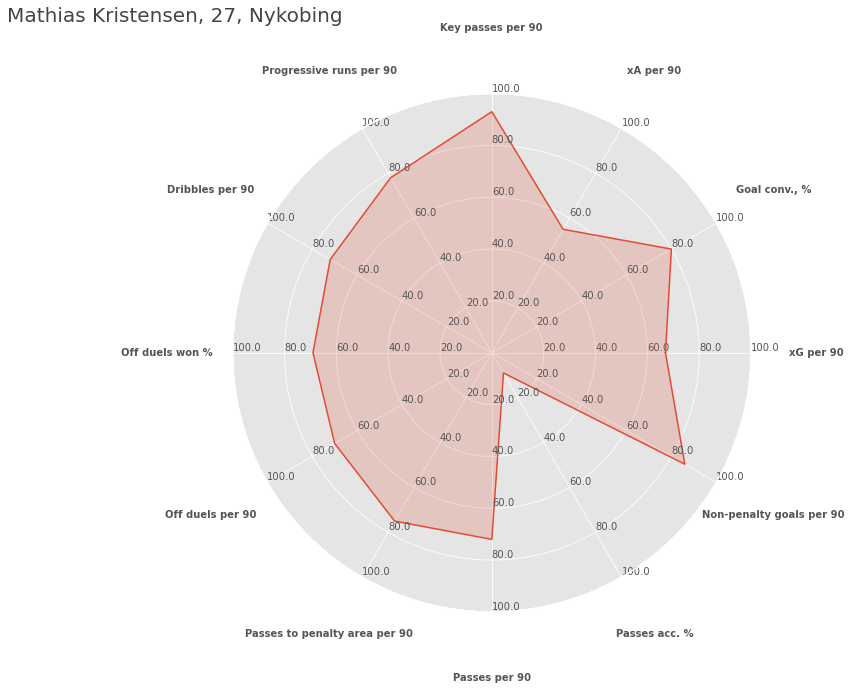 An even more interesting choice is the 27-year-old Mathias Kristensen. Despite his rangy size (2.01 m), he played with a balanced approach as the data shows and he could be helpful for any front line that lacks size and composure.

The NordicBet Liga holds a lot of values in terms of young players. Now, these athletes are trying to show that they are capable of returning to the top flight. It is not unusual to see players starting in this league and then moving on to more successful paths. Manchester United legend Peter Schmeichel, the late AC Milan player, Jon Dahl Tomasson or the great Ajax player, Dennis Rommedahl all started their careers in the Danish lower league. Is it possible that we can witness a great talent in the NordicBet Liga? Only time can tell but until that we will continue looking.