Finding the most prolific attackers in the 3. Liga – data analysis

Every club needs a player who is good at scoring goals. However, the general need for prolific goal-scorers doesn’t make it easier to ultimately sign one. Instead, the competition is huge, and the fees rise accordingly.

That makes it even more important for financially disadvantaged clubs to become creative and scout in lower leagues to find talent at a reasonable price. One of these lower leagues can be Germany’s so-called 3. Liga. While Bayern, Dortmund & Co. are supposed to return next weekend, the 3. Liga still fears for a continuation of its season. Most clubs in this league are operating at a deficit anyway and will be forced to sell players in order to pay the bills.

In this data analysis, we will examine the most prolific attackers of Germany’s third division based on their statistics. In addition to that, this analysis will briefly profile some of the most interesting players that come up in the data.

When analysing the output of a striker, the first step is usually to take a look at the underlying numbers in terms of shots and expected goals. This gives us an overview of attackers that are able to get into dangerous positions and the number of shots they take. To get a reasonably meaningful sample size, we only include players with more than 900 minutes this season. Since penalties have an xG-value around 0.75, they are excluded in this analysis because they don’t give us many indications of a players’ quality and might bias the results. Philipp Hosiner is a good example for that: He already scored 16 goals in the league, which sounds remarkable at first. However, as it turns out, seven of them came from penalties. Furthermore, as we want to find the most prolific attackers, it might be useful to not only look at central strikers but also at attacking wingers and attacking midfielders.

Additionally, we included a third variable in our graph: touches in the box. It would be logical to assume that players who often manage to get into dangerous positions also have a correspondingly higher number of touches in the box. 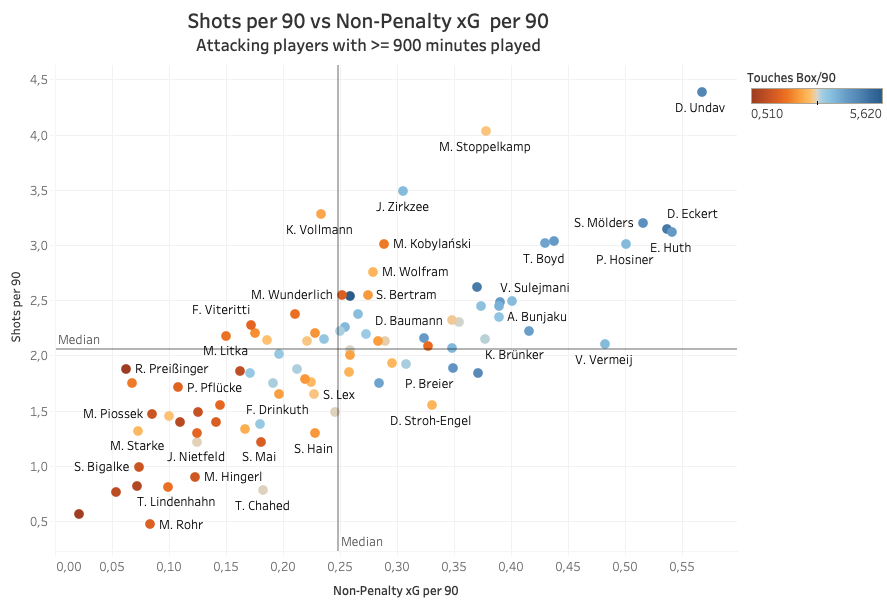 Evaluating the graph, we can see that there are some obvious outliers with – on first glance – pretty decent numbers while others may go unnoticed. Especially Deniz Undav in the top right corner stands out with an enormous shot volume. As expected, touches in the box seem to have a positive influence on the xG-value. The graph also gives us some conclusions for the xG/Shot-value, although it’s not explicitly stated. Vincent Vermeij, for example, averages a sky-high xG/Shot of 0.23, illustrated by a high xG per 90 combined with a relatively low amount of shots.

Based on this graph, we will now take a look at some players that come up with impressive numbers in more depth to gain a better understanding of their underlying style and player role.

The most promising talents

Let’s start with the most obvious outlier in our graph: Deniz Undav. If you already thought that this might be an interesting player for your club next year, I have to disappoint you. The German striker just signed a contract with Belgian second league-side Royale Union Saint Gilloise to join them on a free transfer this summer. This move still leaves me wondering – has no other more ambitious club been interested?

At 23, Undav is finally having his breakout-season in Germany, putting up superb numbers. While he started the season on the bench, his success story began when he scored twice in his first appearance in the starting lineup back in August 2019. The most obvious thing about Undav is his extraordinarily high amount of shots. This number even sees him in the 99th percentile among strikers in Europe’s top five leagues. The argument against shooting so frequently is usually that a player opts for too many shots from unfavourable positions. Given his xG/Shot of 0.13, this can be ruled out for Undav and makes his shooting even more impressive.

Another aspect of his game is his playmaking abilities, which are not least proven by twelve assists. Undav likes to drop a bit deeper out of the last line to have the field in front of him and play through passes as midfielders make deep runs in behind. He is technically gifted, and his passing range allows him to operate from that role.

The second striker on our list is Dennis Eckert, who joined Ingolstadt last summer after his time in Vigo including a loan to Dutch side Excelsior Rotterdam. Looking at his data, Eckert seems to be a very complete striker with an all-around skill set. The 23-year-old is a clinical finisher with a great presence in the box and a strong aerial presence.

While he is currently overperforming by 1.81 goals, 0.54 xG per 90 is also very impressive. Similar to Undav, Eckert is not only on the end of moves but also involved in the creation of chances. As he usually plays in a two-man striker-partnership with Dennis Kutschke, the former Celta Vigo player occupies a more free-flowing role. Therefore, even though ranking second-highest in the league for touches in the opposition box, Eckert is more than a pure finisher.

While Undav stood out for his shooting and Eckert for his all-around skillset, we now take a look at players that also performed on a very high level throughout the season and briefly discuss them as well.

Starting the second part of our player list, we take a look at Elias Huth from FSV Zwickau, who’s currently on loan from FC Kaiserslautern. The 23-year-old missed a couple of games due to a broken foot and was just on his way back before the suspension due to Covid-19. Consequently, he only played 1.328 minutes so far.

His metrics look similar to Eckert apart from his fairly low numbers for xG assisted and successful dribbles. This might suggest that he’s not linking up with the rest of the play too much. Instead, he’s mostly influencing the match with his ability to be in the right place at the right time. This is underlined by the fact that all of his goals were scored within the penalty area. He’s not the most mobile striker but convinces with his physical presence up front, including his ability to operate as a “wall-player” and recipient of crosses.

Vincent Vermeij joined Duisburg before the season and as Huth, he is also not the most mobile striker. Instead, at 1.96 m, the 25-year-old impresses with his confidence and presence up front. He is the main point of reference for his team when there’s a lack of passing options. The Dutch striker averages almost 11 aerial duels per 90 at an impressive success rate of 57.5%.

With that said, it would be wrong to reduce him only to his size and his poacher’s goals in the box. Even though he looks a bit clumsy and funky with the ball sometimes, he is able to link up in the attacking third quite decently and already amassed five assists. That amazed me a bit until I realised that he is an Ajax Amsterdam academy graduate. Another stat that stands out is his extremely high xG/Shot. Vermeij doesn’t take a lot of shots but when he does, they’re from good positions. This is illustrated by an outstanding average of 0.23 expected goals per shot. Even though we mentioned that he is able to link up, his playing style is still very much focused on receiving crosses within the penalty area to make use of his strong abilities in the air.

Christian Kühlwetter is probably the most mobile striker on our list. Besides the occupation of central positions, Kühlwetter can also be lined up as a winger where he can make use of his pace and his dribbling ability. In fact, he even had his best stretch during November and December when he scored six goals in five consecutive matches as a right-winger. The category in which he outperforms other players on our list is his dribbling ability. He averages 4.92 dribbles per 90 at a remarkable success rate of 58.1%.

Lastly, there is Kwasi Oyere Wriedt, who is the only player with a proven track record of his ability to score goals. In the previous two years in the Regionalliga, he already scored 20+ goals and continued scoring on that level in the third division. Until the break, he had already scored 17 goals including three penalties. Next season, we will be able to watch Wriedt in the Europa League. As the 25-year-old was on an expiring contract, he already signed a new contract in January with Eredivise-side Willem II Tilburg.

Besides the strikers we talked about, a few interesting attacking midfielders came when analysing the 3. Liga, one of whom is Moritz Stoppelkamp. The 33-year-old amasses some outstanding numbers, although he is obviously in the latter stages of his career. 13 goals and seven assists make him the second-best scorer after Deniz Undav while over performing his xG by 2.46 goals. During a match, Stoppelkamp does everything for his team: He not only likes to shoot more than four times per 90, but also assists 2.17 shots per 90 combined with 3.83 successful dribbles. He is usually used as left or right-winger.

The counterpart to Stoppelkamp’s development in terms of age can be seen with his teammate Lukas Daschner, who is having a very good season. The 21-year-old has established himself as a regular starter and has shown some promising performances. Daschner occupies something like the Michael Ballack-role as he’s less of a playmaker but likes to receive passes between the lines or turn up inside the box. At 1.85 m, he is good in the air and a dangerous threat in the opposition’s penalty area (0.14 xG/Shot). However, it must not be denied that Daschner is benefitting from a hot finishing streak, overperforming by more than three goals. Nevertheless, given his age and his first season as a regular starter, he has the potential to develop.

Another name that stands out is Martin Kobylanski, who shows some similarities to Stoppelkamp in terms of shooting frequency. The 26-year-old is certainly one of the most potent and dangerous attacking players in the league, either from creating for others or taking up goal-scoring opportunities. His average of 0.29 for both xG and xG assisted is unreached among attacking midfielders apart from Stoppelkamp. As indicated, his shots are a bit wild-west as he likes to pull the trigger whenever possible, which results in 0.096 xG/Shot and more than three shots per game.

As this data analysis has shown, there are some pretty interesting players in the 3. Liga even at a young age. That said, it’s worth noting that all of our results are mainly based on data and only serve as a first impression about players. While all of them are available at reasonable prices, one must always take into consideration the difficulties of translating these performances into a new league and a new style. In the end, this is probably the most difficult question to answer.