Last season, FC Augsburg finished 15th in German Bundesliga and just 5 points ahead Werder Bremen that needed to go to the play-offs. After their head coach change, Heiko Herrlich di not have the best start at Augsburg. However, they stayed in Bundesliga. The next season starts with difficult matches against teams like Borussia Dortmund, VFL Wolfsburg, RB Leipzig and Bayer 04 Leverkusen. Then, FC Bayern are waiting for them at the end of the first half of the season.

During the summer transfer window, Augsburg improved their squad with experienced Bundesliga players. However, they also lost some talented players. So, did Augsburg do a good job during the current transfer window? And, can they avoid a similarly bad season like last year?

In this data analysis, we will take a closer look at FC Augsburg´s squad, their players´ data and statistics. Furthermore, this analysis will provide you with Augsburg´s playing style.

First of all, we will look at the squad structure and the width within the team. As you can see in the image below, Augsburg´s current squad list has 30 names. Three goalkeepers are Bundesliga standard. Adding to that, they have a good number of full-backs (five, three left-backs and two right-backs) and with four centre-backs they are well-staffed for their two competitions (Bundesliga and DFB Pokal). In the midfield, the team seems to be unbalanced as they have six central midfielders and only one central offensive midfielder. All in all, they have six wingers (five right-wings and only one nominal left-wing). Five forwards complete the squad list.

Considering, that Augsburg only participate in the national competitions of Bundesliga and DFB Pokal, 30 players might be the perfect squad width for the upcoming season. 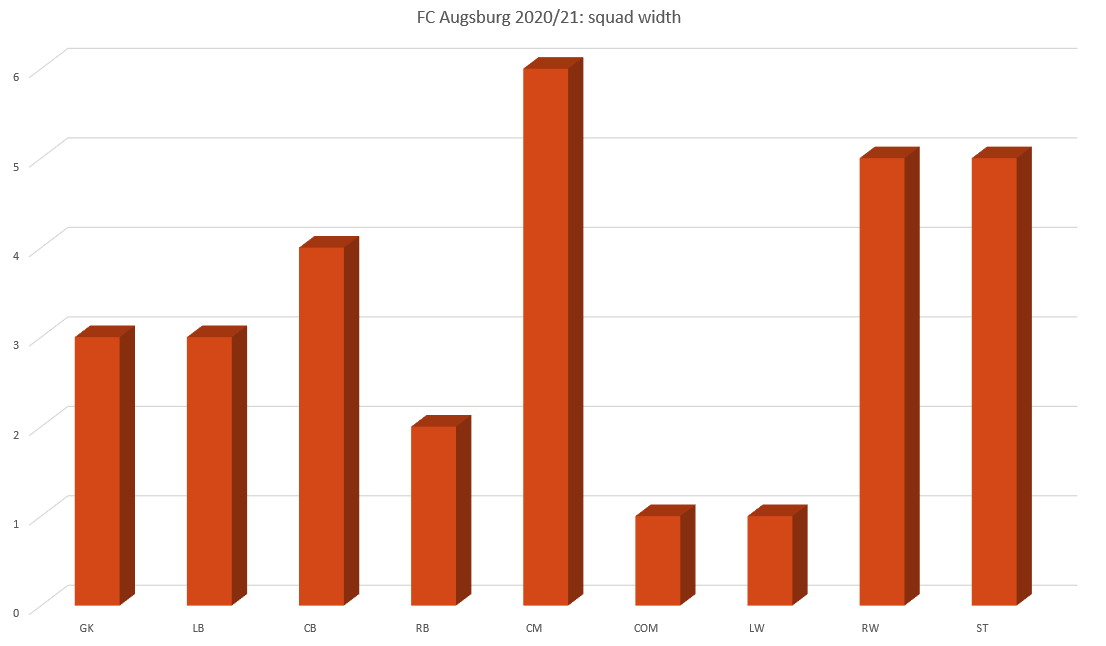 Even if Augsburg lost an experienced goalkeeper with Andreas Luthe (Union Berlin), they are well-staffed in the goalkeeping position. Rafael Gikiewicz (32, Union Berlin) is their new number one goalkeeper. Together with Tomas Koubek (28), Gikiewicz will fight for the spot in the first eleven. Koubek came to Augsburg for 7,5 million euros last summer but could not meet the expectations. He lost his starting spot to Luthe last season and might be only the number two this season again. Benjamin Leneis (21) will be Augsburg´s third option next season. 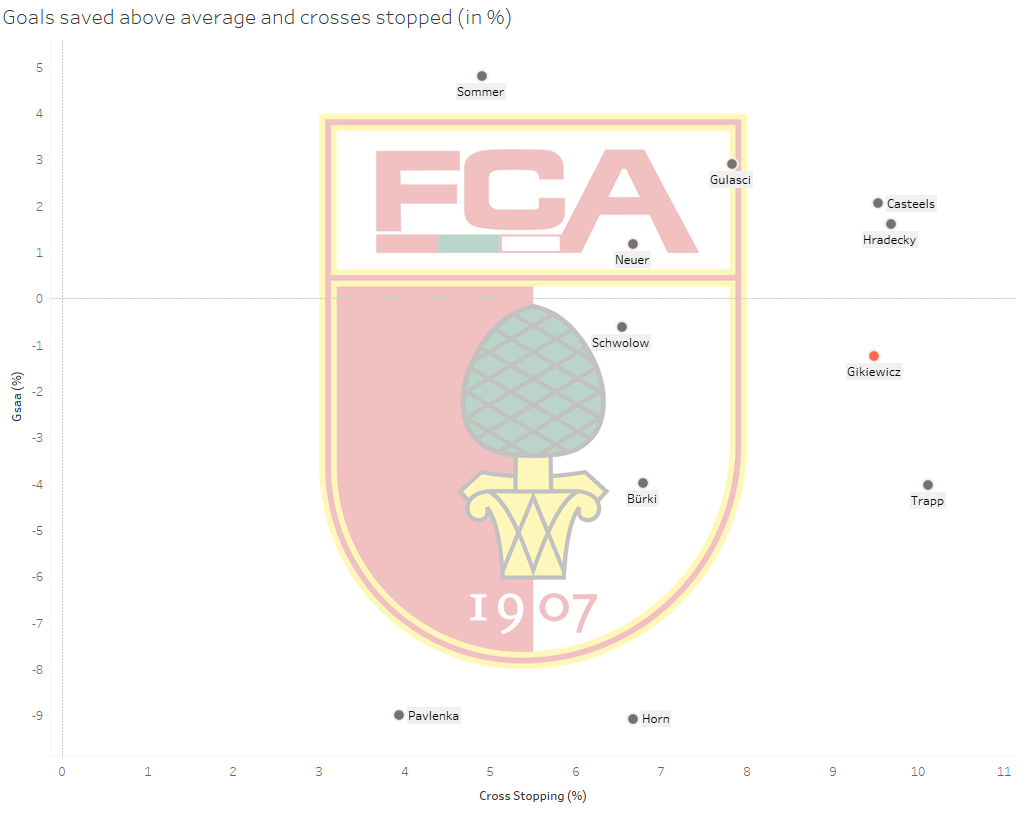 Marek Suchy (32) and Jeffrey Gouweleeuw (29) are well-experienced centre-backs. Together with the two talented players Reece Oxford (21) and Felix Uduokhai (22), they will form the central defence of Augsburg. Gouweleeuw, Oxford and Uduokhai (was loaned, now bought for 7 million euros) played most of the time last season. Uduokhai provides the most successful aerial duels per 90 minutes (4,0) compared to other Bundesliga centre-backs. Oxford provides less successful aerial duels but therefore, has quite good stats in his clearance actions. They could form a good pairing in Augsburg´s defence. 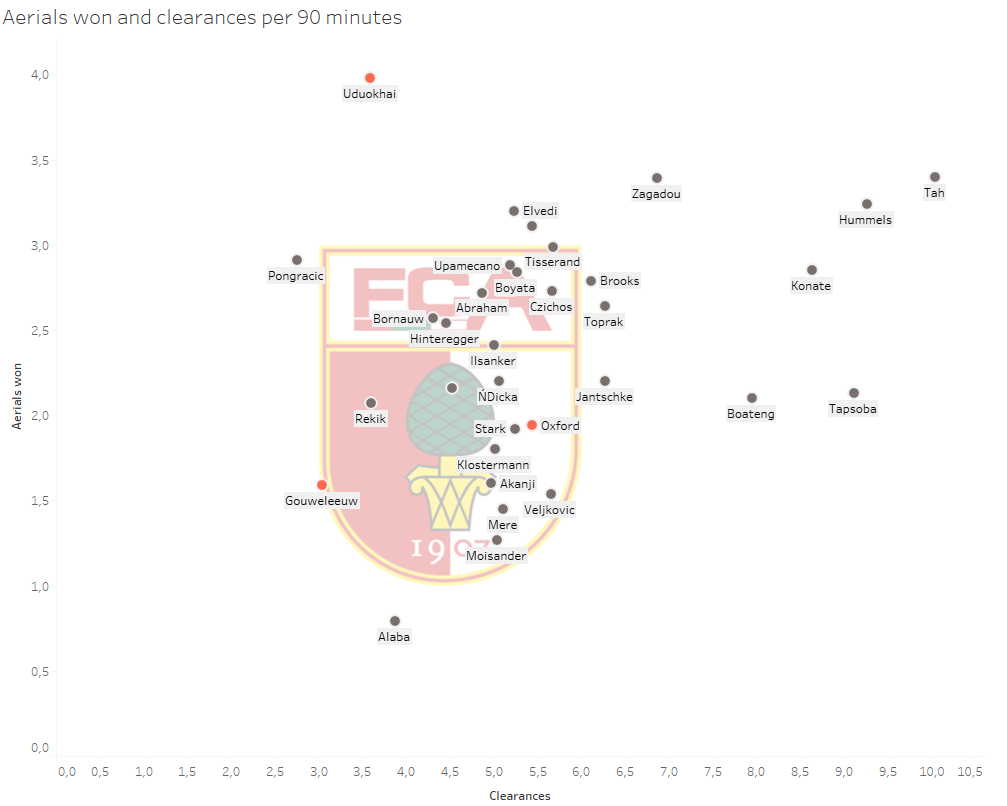 Iago (23) and Mads Pedersen (24, returns from loan at FC Zürich) will play as left-backs whereas Raphael Frammberger (24), Simon Asta (19) and Robert Gumny (22, new player from Lech Posen) will fight for the starting spot on the right side of the pitch. Adding to that, Daniel Caligiuri (32, new player from Schalke 04) can play as right-back as well. Philipp Max (26) was one of Augsburg´s most important players, but left the club for a move to PSV Eindhoven in Eredivisie. However, Caligiuri seems like an especially perfect transfer as he is flexible and provides the most successful pressure compared to other full-backs in Bundesliga. 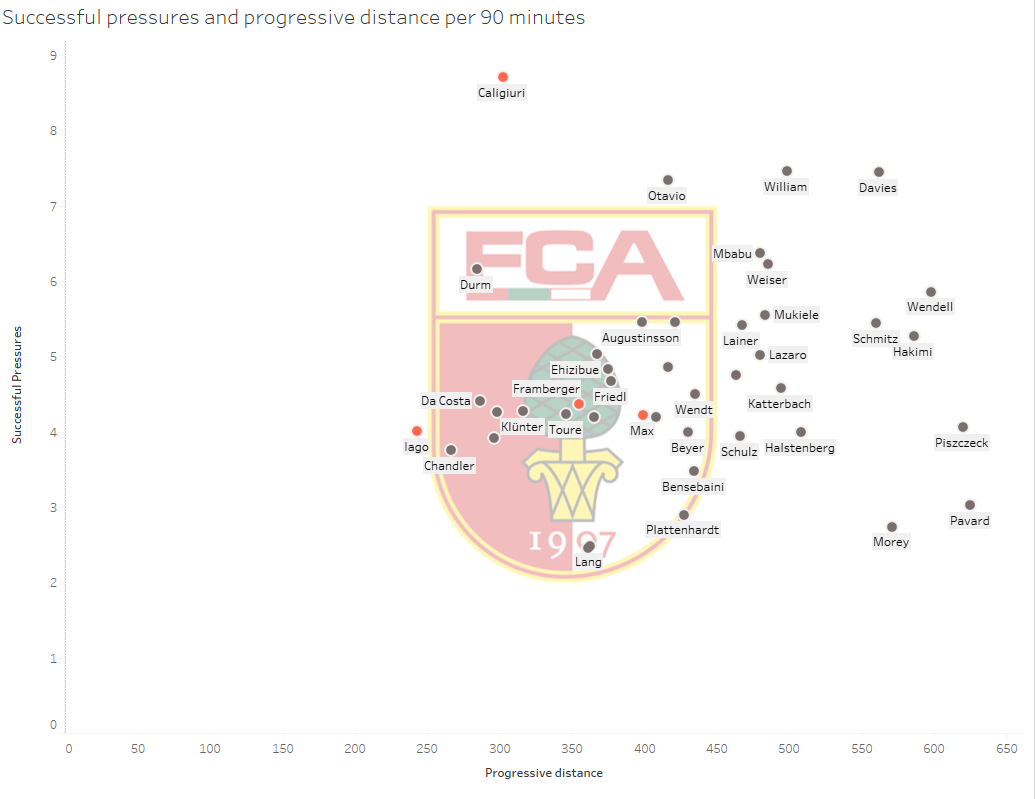 In central midfield, Augsburg have lots of players and a very good balance between young talented and experienced players. Rani Khedira (26), Jan Morávek (30) and new player Tobias Strobl (30, Borussia Mönchengladbach) have played lots of Bundesliga matches in their career. Carlos Gruezo (25), Felix Götze (22) and Eduard Löwen (23) are solid back-ups with potential to improve getting playing time. Again, Augsburg made a smart move taking Strobl as free agent to the squad. As you can see in the image below, he provides a very successful pass completion rate of 88%. Adding to that, he makes the most interceptions compared to Augsburg´s central midfielders. 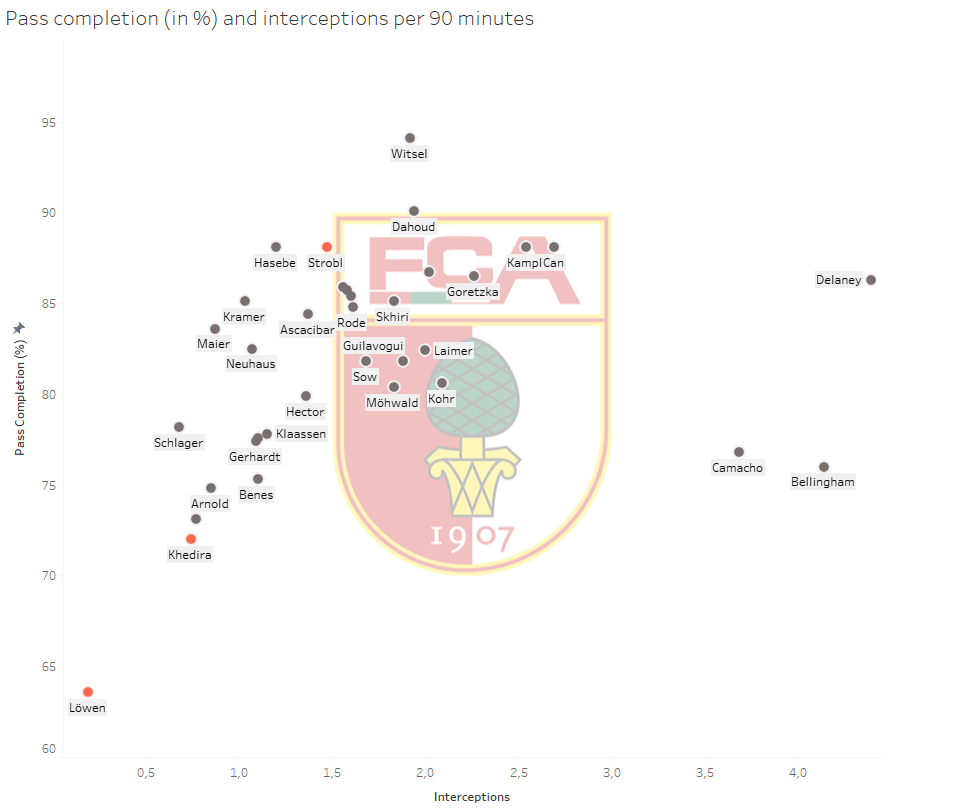 For central offensive midfield, Augsburg only have one player: Frederik Jensen (22). Considering that fact, we can assume that Herrlich will not play with a typical number 10.

Ruben Vargas (22) and Marco Richter (22) played most of the time last season. Under Herrlich, right-wing Noah Sanrenren Bazee (24) got more and more playing minutes. With André Hahn (30), Augsburg have an experienced and speedy player as the fourth option in their hindquarters. Vargas (six goals and two assists) had a quite good first Bundesliga season. Together with Richter (four goals and three assists), he will be a starter on the wings. 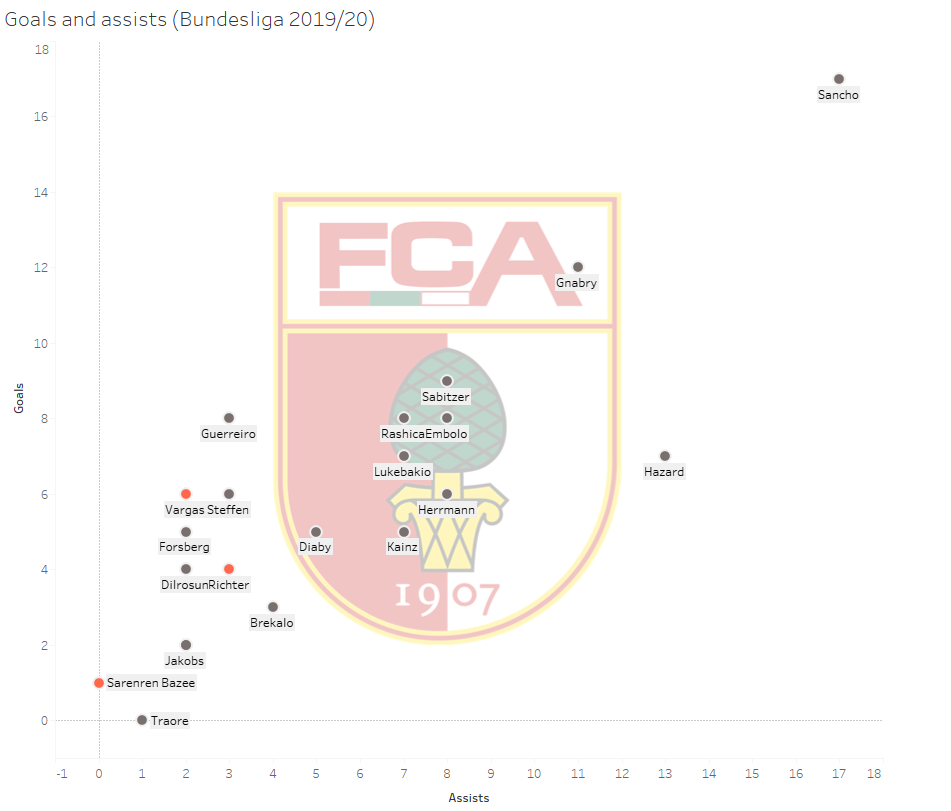 Five nominal forwards are in Augsburg´s current squad: Michael Gregoritsch (26, returns from loan at Schalke 04), Florian Niederlechner (29), Alfred Finnbogason (31), Julian Schieber (31) and Seong-hoon Cheon (19) are all able to play as out-and-out strikers. Finnbogason was injured most time of last season and therefore, he had a low xG. However, in terms of conversion, he provides a similar number than Niederlechner. They both are favourites of getting the two spots up-front in Augsburg´s starting eleven. 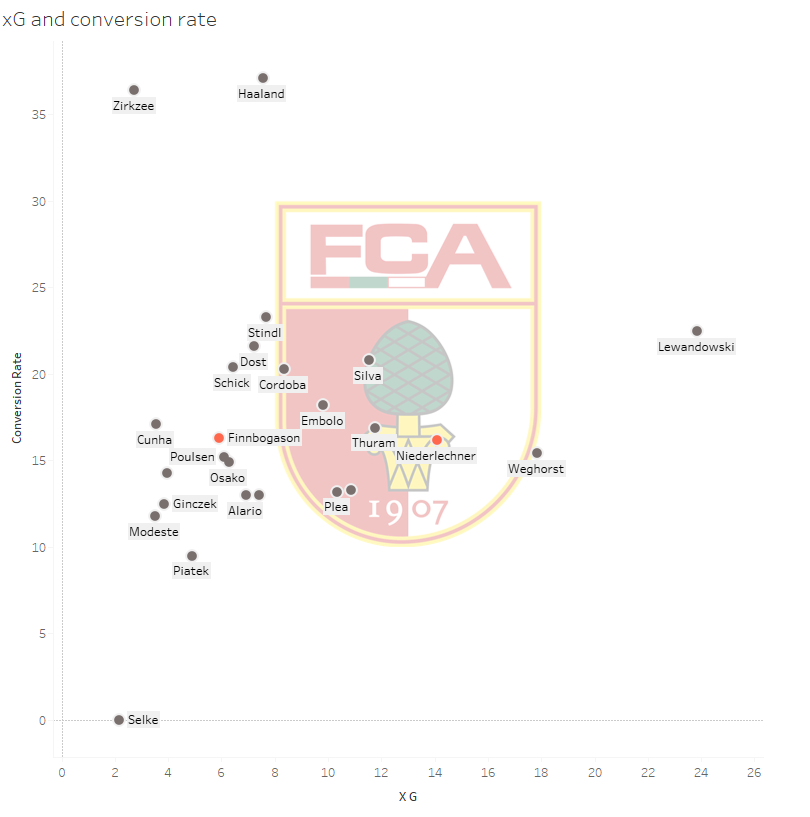 Augsburg is likely to stick to their 4-4-2 formation from last season. Gikiewicz might well be the new number one. With Udhuokhai, Oxford and Gouweleeuw, Augsburg have three good centre-backs fighting for two starting spots. Iago will be set as left-back whereas Framberger, Gumny and Caligiuri will fight for the spot at the right-back position. Adding to that, Caliguiri could also play as a right midfielder. Strobl is maybe the most interesting transfer for Augsburg this season, and he will be set in central midfield together with Khedira or Gruezo. If Finnbogason will be fit throughout the whole season and Niederlechner continues with good performances, they could score 25 or more goals together. 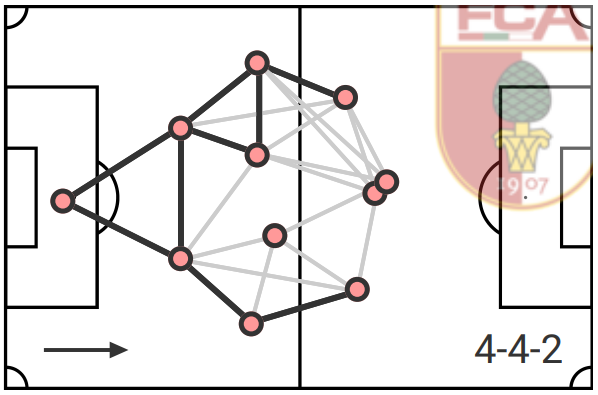 FC Augsburg have a bad season behind them. To improve their performances, they made some interesting transfer with the likes of Caligiuri, Strobl, Uduokhai, Gikiewicz and Gumny. That is why even the departures of Max, Kevin Danso, Sergio Córdova, Stephan Lichtsteiner and Luthe do not seem to worsen the squad.  If Augsburg´s key players will stay fit for the whole season, they have a realistic chance to get into the secured midfield of the Bundesliga table.

19-year old analyst from Germany. I am currently studying football management as I aspire to work in elite football. 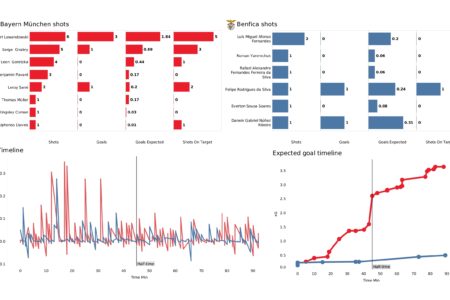 Tuesday night saw Bayern hammer Benfica in the UEFA Champions League. We’ve broken down all the key stats for you to […] 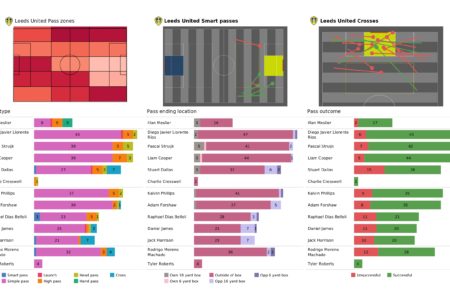 Sunday saw Leeds and Leicester draw 1-1 in the Premier League. We’ve broken down all the key stats for you to […]