Matheus Nunes is a 23-year-old Portuguese international who plays his football for Sporting Lisbon who are the Primeira Liga defending champions . Nunes is Brazilian by birth but chose to represent Portugal at international level. Nunes started his career with Estoril where he made six appearances before he attracted the attention of Sporting and in January 2019, he made the move to Lisbon club. Since then, he has gone from strength to strength and is now a key player in the team who have made the knockout stage of the UEFA Champions League and are only second on goal difference in Primeira Liga. Nunes is now attracting some attention from Premier League sides with Everton linked with being the front runner for his signature. Nunes is part of an impressive crop of youngsters at Sporting and keeping hold of them will be critical in their long-term success.

This scout report and tactical analysis is set out to investigate Nunes’s game and why he is developing into one of the exciting young midfielders in Europe.

Nunes is usually deployed in double pivot alongside fellow Portuguese midfielder Joao Palhinha, this is the tactics prefered by Sporting. This is an effective combination as Palhinha is a more defensive player and plays in the mould of a traditional number 6. Looking to disrupt the opposition attacking play and win the ball back. Whereas Nunes operates more as a number 8 looking to get forward and contribute to the attack more often, however, he doesn’t abandon his defensive duties. 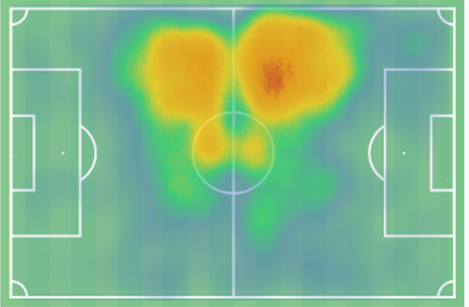 This partnership has allowed Nunes to develop and excel. The heat map below shows the positions that Nunes operates in, showing he plays on the left side of the Double pivot.  It shows he contributes in both halves of the field but slightly more in the opposition half.

Nunes has a brilliant passing range, he can make passes of both short and long-range, which will soon become apparent. Nunes can play many different types of passes whether he is looking to switch the play or try and break lines with penetrative passes. Both types of passes will be looked at in this analysis. Having the ability to make and execute several different types of passes makes Nunes highly effective, as he can be effective in many aspects of the attacking play.  The first example is looking at Nunes’s long-range passes especially his ability to switch the ball with long switches of play. This is shown brilliantly in a recent game for Sporting against Boavista Nunes has the ball on the left-hand side by the touchline.

Nunes carries the ball forward before cutting inside onto his right foot and hitting a cross-field ball to wingback Pedro Porro. As shown below, Porro isn’t actually in the picture but the area highlighted shows where the pass was made too. 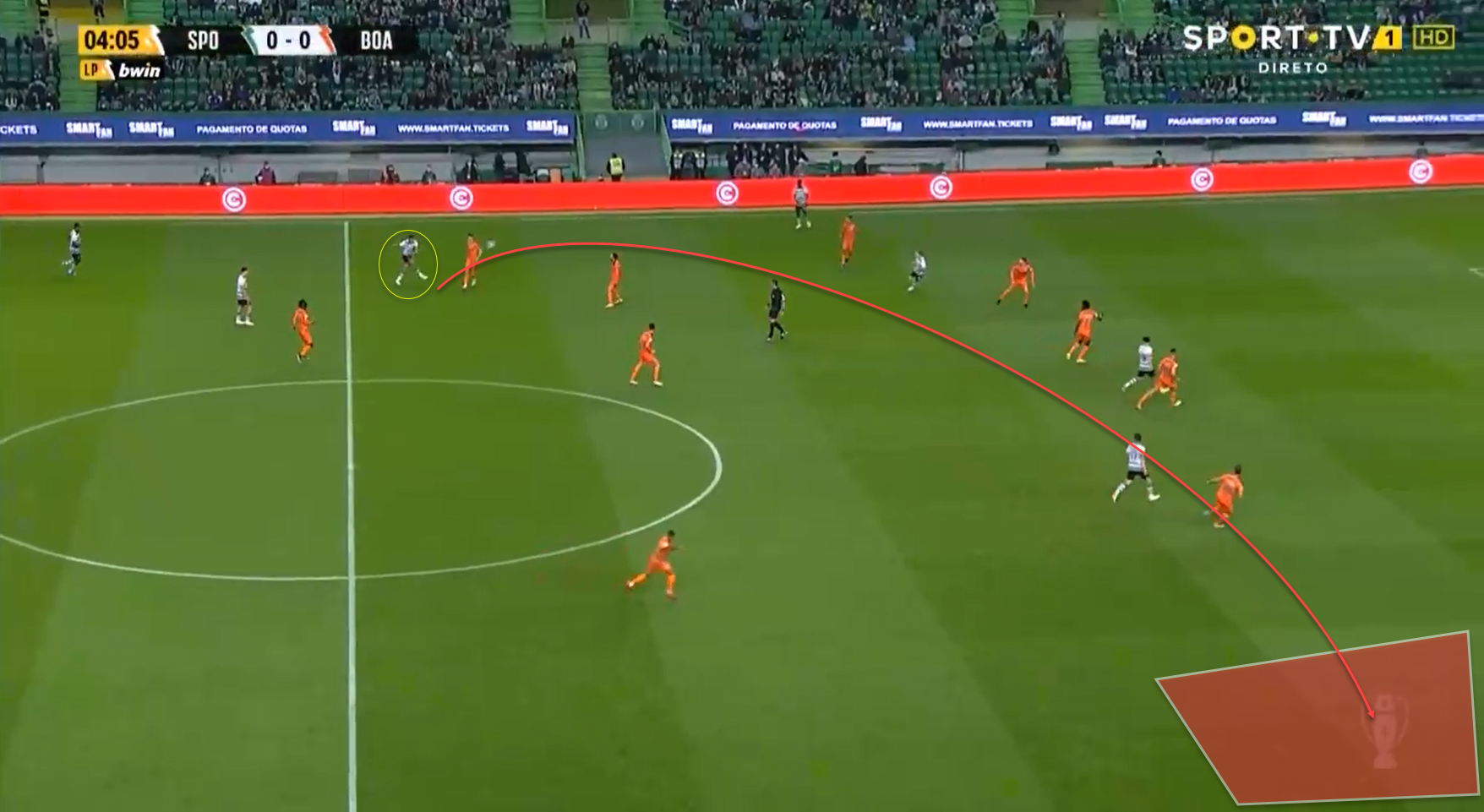 The ability to switch play like this is a tough skill and very few players have this sort of passing range. Nunes has allowed Sporting to change the area/ focus of attack with one pass, while also managing to progress them closer to the opposition goal.

In addition to switches of play Nunes has the ability to play passes that split the opposition backline. This is something Wyscout refer to as a smart pass, which is a pass which is creative and penetrative and attempts to break the opposition defensive line. Nunes ranks 5th in smart passes in the Liga Primeira, reinforcing his ability to break defensive lines with his passing. This example comes from the same game against Boavista, where Nunes has managed to carry the ball upfield (something we will later address) and plays a defence-splitting pass to create a golden opportunity for Sporting.  Nunes uses the outside of his right foot to play the ball between the defensive line and release the onrushing Sporting attackers who run in and fail to beat the keeper in a 2 v 1.

Later in the report, these types of passes will also feature which will reinforce Nunes’s ability to play these defense splitting passes. Having this wide range of passing allows Nunes to manipulate and exploit defences in many different ways, allowing Nunes to make a strong contribution in attack.

Another key feature of Nunes’s game is his ability to carry the ball and make progressive runs, something he ranks 3rd in the league with. Nunes uses a combination of speed and strengths to make these runs but also demonstrates great technique and flair to make him so effective at making progressive runs. The first example will show a run from Nunes against Sporting Rivals Benfica. He picks the ball up in his own half and looks to carry it into the highlighted space in the opposition half.

As he carries the ball into the space it attracts Everton into attempting to make a challenge. He knocks the ball inside of Everton and jumps over the Brazilian, showing great composure and flair.

He continues to carry the ball towards the backline, as he does this, he slows up slightly with the intention of allowing for a Sporting to player to make a run.

Paulinho runs onto the ball and chips the keeper to give sporting a 2-0 lead in the game. This again highlights Nunes passing quality. In this example, Nunes has single-handedly been able to not just carry his team up the field but create a goal-scoring opportunity for the team.

The next example is less fruitful for the team but shows Nunes ability to carry the ball yet again. Nunes is about to receive the ball deep in his own half, in order to shake the pressing defender he sets himself up as he is going to have a touch and set the ball with his body facing the ball, as the defender gets tight he lets the ball roll across his body and spin out onto the ball.

He has now managed to evade the defender and he has the ball with plenty of space in front of him to exploit, shown with the highlighted area below.

Nunes looks to exploit the space left by the opposition midfielder who pressed him. Nunes’s speed allows him to get into opposition territory before a combination of good defending and a lack of passing options mean Nunes is challenged. Although he maybe could slide the man in front of him in.

This again shows Nunes ability to carry the ball forward towards the opposition goal, which can be used as both ball progression but also to create goal-scoring chances.

So far in this analysis, we have focused on Nunes’s attacking contributions however he does contribute defensively also. This can be seen in a combination of interceptions, challenges and duels all areas Nunes excels in. He also demonstrated good anticipation and reading of the game, which allows him to make effective interceptions and challenges. The first one is against Borussia Dortmund in the Champions League, where Nunes manages to intercept the ball in front of Axel Witsel.

Sporting is looking to press Borussia Dortmund, as the ball gets played to Manuel Akanji, Sarabia looks to press him which will force him to play a quick pass into Witsel. Nunes already anticipates this and starts to make his run round Witsel to intercept the ball.

As the pass is played Nunes gets in front of Witsel to win the ball and create a 3 v 2 situation in the Dortmund half, this then forces Witsel to bring Nunes down and stop the attack. This is brilliant anticipation and understanding of the game from Nunes. 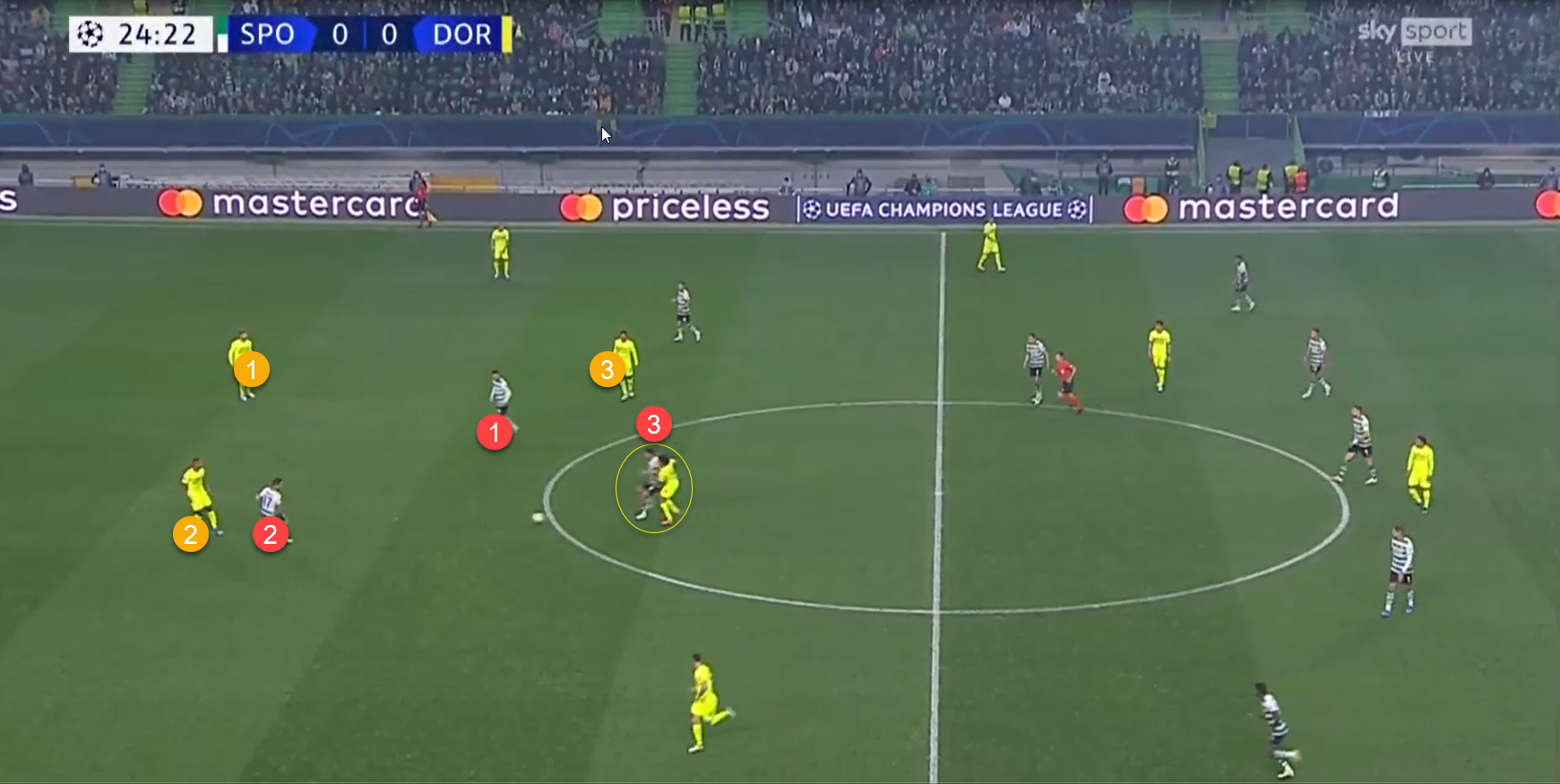 This next example comes against Penafiel, in the league cup. Penafiel has the ball on the left hand side and the player on the ball is about to play a pass inside however Nunes anticipates this pass and manages to get the player and challenge his touch and turn the ball over.

As the ball gets played inside Nunes, realises he can’t win the ball by intercepting the passing lane so waits for the Penafiel player to take a touch then challenge him, as shown below.

This then leads to Sporting turning the ball over and looking to attack Penafiel. Both these examples should demonstrate Nunes defensive contribution and his ability to read the game and anticipate opposition attacking movements.

Nunes is a player who has a wide array of skills and attributes all of which make him a highly effective midfielder. I believe if given the opportunity Nunes could be effective at one of Europe’s biggest clubs and a move to a club like Everton would maybe selling himself short. If he was in a more prominent league, I think he would be more discussed and talked about in a higher regard, Due to him having many attributes that are desired in a central midfielder which we have shown in this scout report.