Lens got promoted to Ligue 1 after their successful 2019/20 season and surprised everyone with their consistency and solid displays that led to finishing seventh in their first season back in the elite.

The team have been moving around the top half of the table this campaign too, performing well in attack, with only their defensive vulnerabilities leading to dropping points. Currently they still have the chance of playing in the European competitions, being four points away from the Europa League group stage spot.

One of the players that helps them remain consistent and supports both their attacking and defensive actions is Jonathan Clauss. The right wing-back is crucial for the team in each phase, progressing the ball, creating chances in the final third but also providing additional security off the ball.

Clauss is currently the leading creator in the league with seven assists, which have helped a few of his teammates find the net. The 29-year-old’s qualities and judgement of the game make him the best performer for Lens as he achieves balance in his performance and manages to split his responsibilities well. While he contributes to ball progression, he also constantly looks to set his teammates up in front of the goal and support their movement.

In this scout report in the form of tactical analysis, we explain how he fits Lens’ tactics and what makes him crucial in every phase.

The manager Franck Haise sticks to a back three formations, switching between 3-4-1-2, 3-4-2 and 3-4-2-1. The wing-backs are crucial in his strategy as he requires playing with width and attacking down the wings.

The regular starters in the wing-back positions Clauss (right) and Przemyslaw Frankowski (left) have many attacking responsibilities and move deep in the opposition half. While Clauss provides more balls to the central areas through his crossing, Frankowski is the one who provides an additional direct threat by cutting inside.

The team usually focus on creating many scoring chances from each opportunity they get. They try to expose the opposition through crossing, through smart passes but also take on long shot opportunities. They have scored 33 goals so far, which is the third-best record in the league, after PSG (39) and Rennes (34). The team’s shot frequency is higher than the average in Ligue 1 as they focus their efforts on attacking.

With their back-three formation in possession, they try to commit more players in the opposition half and control the game there. Although they usually keep a very narrow shape and limit the spaces between the lines with the attacking players often playing almost on the same line with the midfielders.

Lens also aim to expose their opponents on a counter, thanks to their ball recovery efforts. The team create 3.5 counter-attacks on average per 90 and many of them result in shooting, although they have only scored once from these situations.

Clauss’ importance in the build-up

As mentioned, the wing-back role at Lens has many responsibilities. That’s why the team rely on Clauss in many aspects of the game. From creating short pass combinations and progressing the ball through link-up-play to him advancing the ball on his own. His 2.13 progressive runs on average help him in delivering the ball to the final third and creating chances for his teammates. 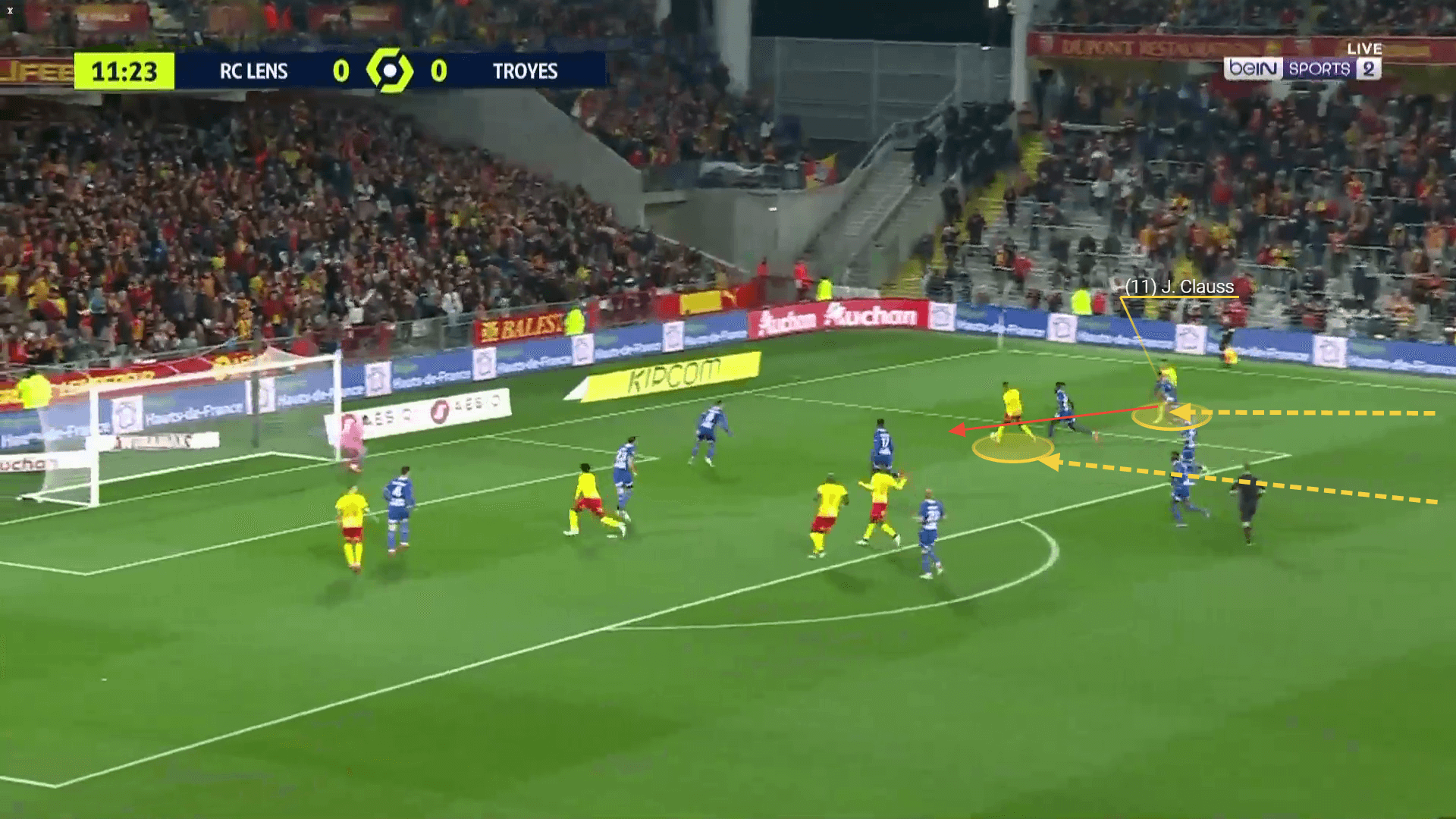 In this case, he received the ball on the flank and carried it to the edge of the box dribbling past his marker. He then sent a short smart pass to his teammate who moved in a better position to continue the attack.His ability to hold on to the ball is crucial in retaining possession and reaching the final third, where Lens have committed many bodies in efforts to stretch defences and expose the opposition. While Clauss’ pass completion rate isn’t high enough (73.4%), he still manages to orchestrate the play even from his wide position and helps the team break through the oppositions’ pressing structures.

Whenever he is unable to take on his opponents and break through the press, he tends to send long vertical passes and release the pressure. That helps in moving the ball away from the overloaded areas and exploiting the underloaded or stretching defences so they can create gaps.

He constantly makes off the ball runs on the flank to support his teammates’ movement forward and offer a passing option. Clauss often drops deeper to pick up the ball and then his link-up-play and spatial awareness help him in delivering it to key areas and breaking through defences.

He doesn’t try to overcomplicate his actions and try to lure defenders risking losing possession. Instead, the 29-year-old always tries to find better solutions and escape pressure with his movement and passes. His strong decision-making makes it easier for the team to deliver the ball to the final third and create chances.

Clauss’ biggest impact is upfront. He has a natural attacking flair that fits Haise’s strategy well, as his complex skillset is suitable for the crucial wing-back role. As mentioned, the French currently leads the Ligue 1 assist chart with seven assists, as many as Real Madrid‘s target Kylian Mbappé has, which have pushed his team through some difficulties.

His main focus is on creating goalscoring opportunities for his teammates. It affects the team’s attacking movement greatly as his ability to hold on to the ball allow the rest of the players to move forward without the ball and overload the final third.

Once they have moved into a more advanced position, he is quick to deliver the ball centrally, most frequently through crossing. Clauss crossing ability is his biggest strength. He contributes to the attacking actions with 5.1 crosses per 90 on average, which is the second-highest frequency in the league. It underlines his active involvement upfront and his impact on creating chances in front of the goal. Six out of his seven assists are a result of his successful crossing.

He manages to turn the direction of his movement quickly which often throws defenders off and allows him to free himself and progress the ball. He takes on his markers through dribbling, averaging 2.19 dribbling attempts per game and sometimes moves to the half-spaces with the ball, distracting defenders and opening spaces. 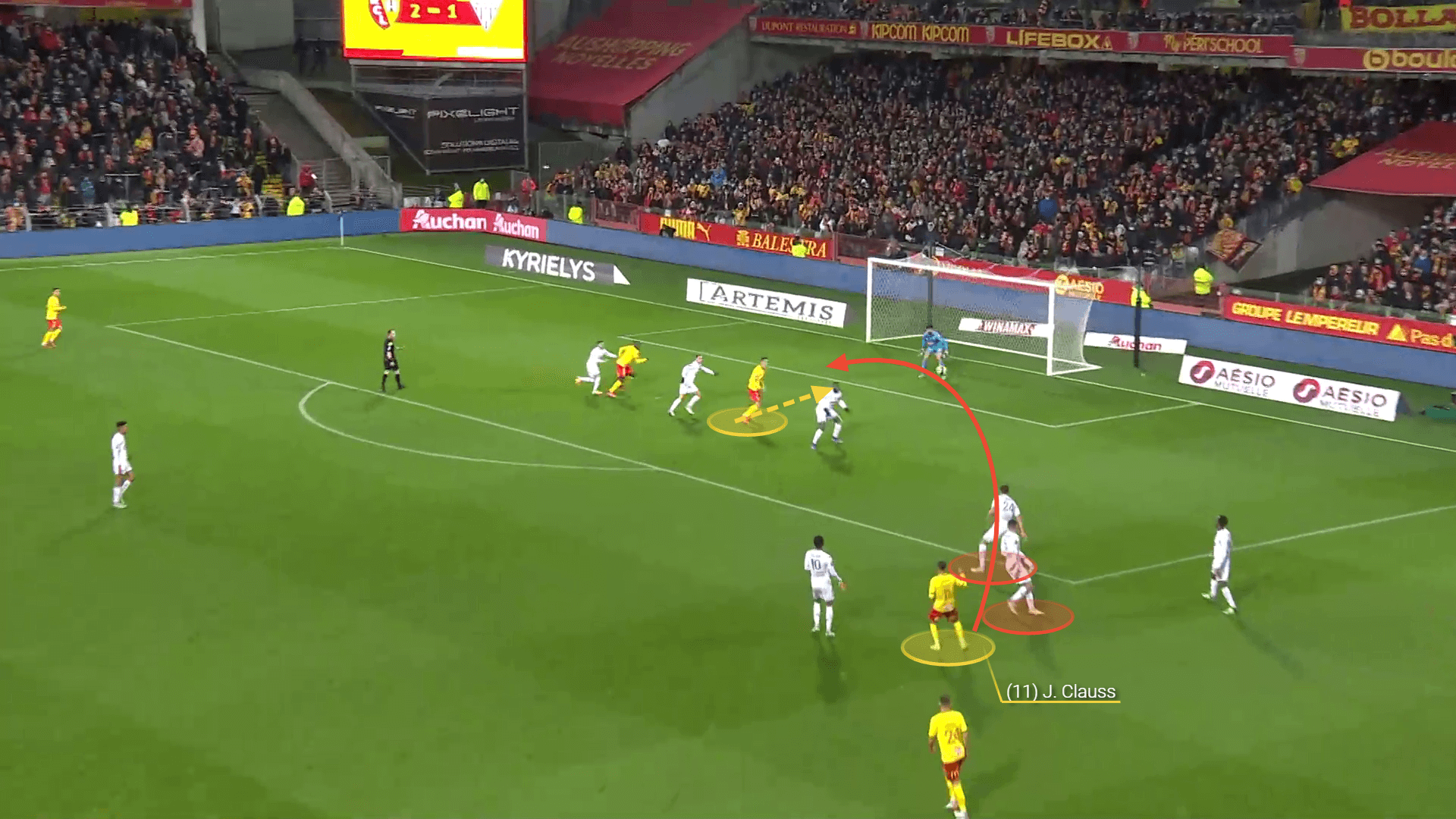 Then cuts to the half-spaces, sending perfectly measured crosses to his teammates in the box.

Clauss’ defensive contribution is equally important. He doesn’t hesitate to challenge the opposing players and go for the ball. His awareness off the ball allows him to drop back and fulfil his defensive responsibilities, although his attacking movement does sometimes affect his reactions in defensive duels.

He pressurizes the opposition and tries to gain back possession in their own half. He recovers the ball 5.28 times on average per 90 and provides additional defensive security, helping the team in moving forward and often giving them the chance to counter-attack. 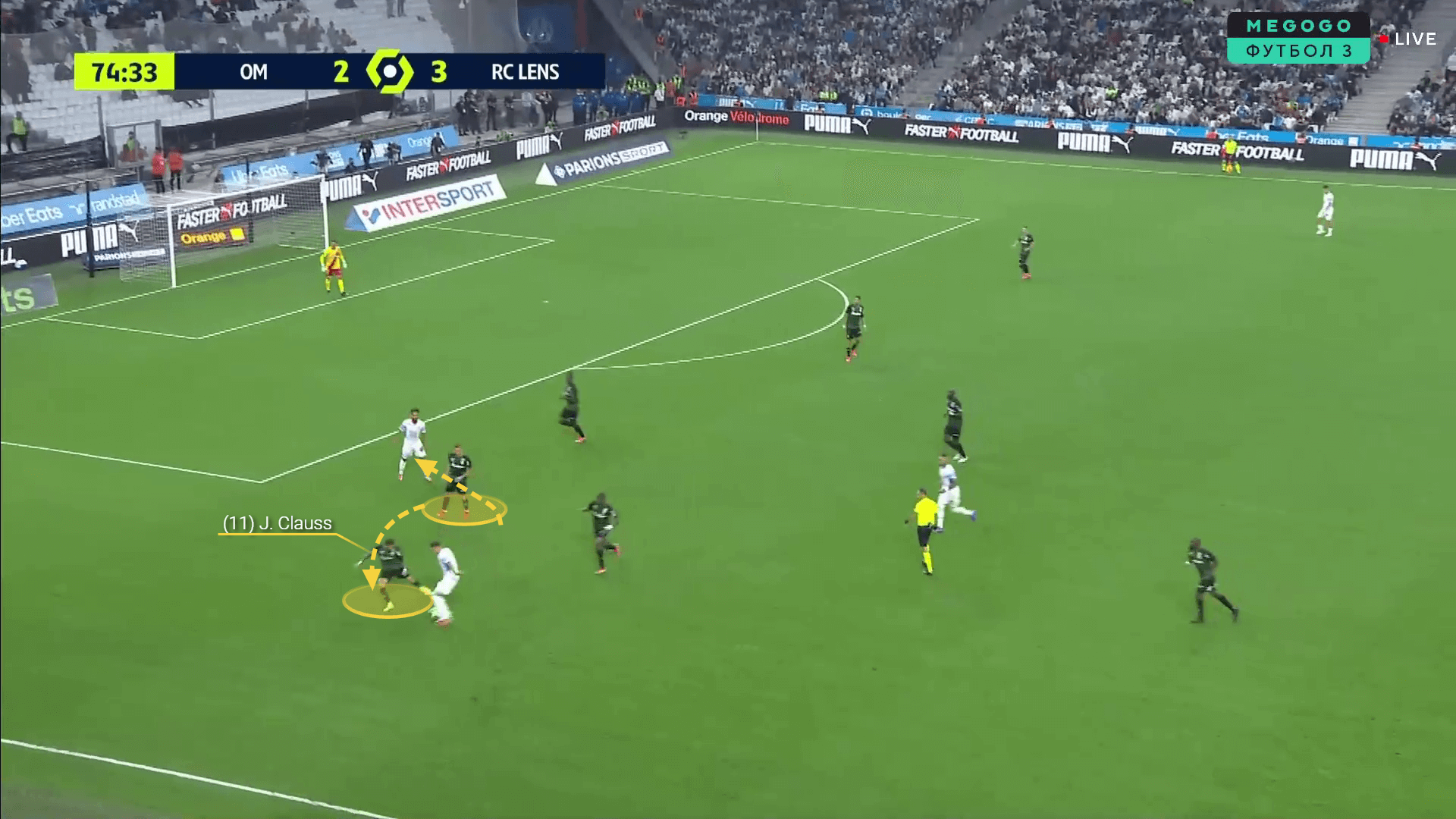 He then goes out to pressurise the ball carrier while his teammate covered depth for him. Clauss immediately attacked to recover the ball and get the team out of their own half.His anticipation skills allow him to intercept the ball rather frequently and stop the opposition’s attacks, which is crucial as Lens struggle in defending against through balls and often concede chances from these situations. He averages 5.4 interceptions per game, which increases his impact in each phase.

He even manages to make 2.13 clearances which underlines his quick reactions and ability to anticipate the opposition’s movement.

As our analysis shows, Jonathan Clauss drives Lens forward and helps them in each phase, providing additional attacking threat from his wing-back position but also having defensive responsibilities and dropping back next to the three-man backline.  His crossing increases the team’s efficiency in front of the goal as he constantly supplies the box with quality balls that set his teammates up. That makes him irreplaceable on the right flank.