He arrived at Real Madrid in the summer of 2018 from the Brazilian side Flamengo despite agreeing to join the La Liga side the summer before. Vinicius Junior arrived with lofty expectations with lots of comparison to the likes of Neymar however even with good performances he only managed to muster eight goals over the course of three seasons. This season it is a different story with him being the second top scorer in La Liga behind fellow teammate Karim Benzema and with him now managing to score goals regularly he is on the path, if not already on it, to become one of the best players in the world and at the tender age of 21. He has a long and promising career ahead of him.

This tactical analysis and scout report aims to unpick some of the key attributes of Vinicius’s game and why he has started to produce a tangible output of goals and assists.

So far this season Vinicius Junior has managed to score 12 goals and produce five assists in all competitions for club and country. This is shown in the below graphic comparing Vinicius’s output against other La Liga attackers, we must also note that Depay especially has had his numbers padded with goals for the Netherlands against the likes of Gibraltar and Montenegro. With Vinicius Junior, 10 of his goals have come in La Liga where he is the league’s second top scorer. 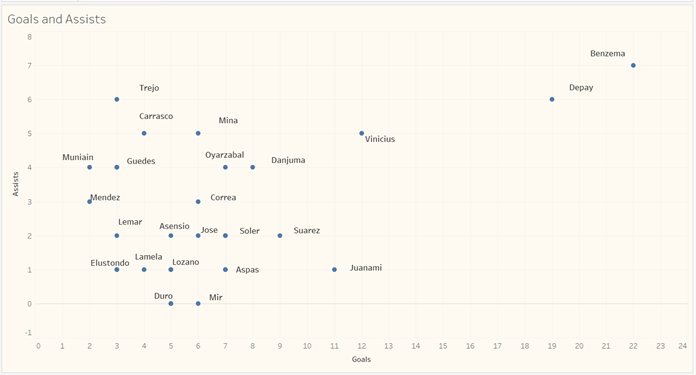 Now let’s look at the expected goal and expected assists numbers which help us better understand whether a player is being lucky in front of goal or is getting in the right position to score consistently. 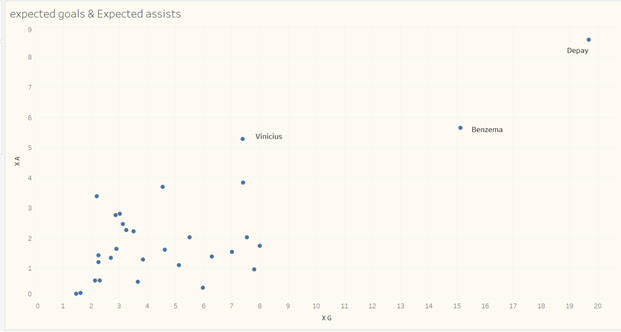 So, we have established Vinicius Junior has impressive goal-scoring numbers but what other attacking metrics is Vinicius Junior excelling in? He leads the league with the most touches in the opposition box with 92 and has the second-highest per 90 with 6.24, this ranks 4th amongst players across Europe’s top five leagues.

He is also excelling in progressive runs with 113 all season and 7.66 per 90, this is in fact the highest across all the big five leagues in Europe (we will look at Vinicius’s progressive runs later in the scout report). The below chart shows how good Vinicius is in these metrics compared to La Liga’s top attackers, with only Danjuma close to him. 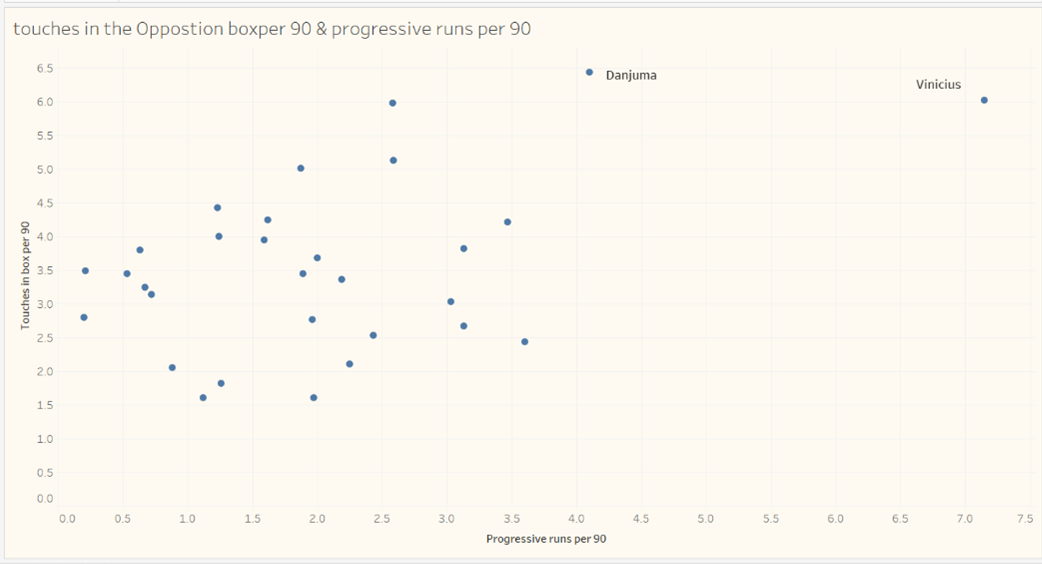 Finally, he is excelling in 1 v 1 dribbles with the second most in Europe with 150 at 10.65 per 90 which, is the 2nd highest in Europe’s top five leagues. This is in addition to ranking third in both shot-creating and goal creating actions this season La Liga, which are a metric used by FBREF to show someones ability to create goal-scoring or shot opportunities for their team. Hopefully looking at the data helps you understand that Vinicius is now establishing himself as one of Europe’s best and most dangerous attackers.

So as the data helped us establish Vinicius is one of the best ball progressors in Europe, he uses his speed as well as a combination of strength and intelligence. His ability to pick the ball up in his own half and carry his team towards the opposition box is brilliant to watch and is made to look so simple and effortless by the Brazilian. Below is an example of this from Tuesday night’s UEFA Champions League clash against Inter Milan. Here Real Madrid have cleared the ball off a corner and it has fallen to Vinicius Junior by the touchline deep in his own half, he is also surrounded by three Inter defenders. Although it may look as if there is little room to work with Vinicius Junior is going to know the ball past D’Ambrosio.

He uses his strength to hold off and get past D’Ambrosio and then still has three Inter defenders near him. This is where he uses his speed and acceleration to carry the ball up the field and deep into the Inter half.

In the end, it was a brilliantly timed challenge from Nico Barella to stop his run but it shows how he has managed to carry his team from deep in their own half to deep in the opposition half and progress the ball up the field in a far from advantageous situation. If it wasn’t for Barella in this example, Vinicius Junior is in a 1 v 1 with Skriniar and looking to get into the opposition box.

The next example is a better situation for the Brazilian however he is still as effective. This time it is against Real Sociedad, and Real Madrid are on the counter when the ball is played to Vinicius Junior. Here you can see they are in a 2 v 2 situation and Vinicius Junior has a lot of space to work with. He can come inside, or he can continue to his left -this is what he does (using the red highlighted space) and is a smart decision as it prevents the recovering defenders getting involved in the play.

As he continues to carry the ball towards goal Vinicius Junior uses small touches to keep the ball close and under his control allows him to take the ball away from a defender at any point. He takes the ball past the Sociedad defender and wins a freekick for his team in a very dangerous position.

This is another example of how Vinicius has the ability to carry the ball at speed and get his team into dangerous areas of the pitch.

Vinicius is an inverted winger or inside forward which means he plays on the side of his weaker foot. In this case, Vinicius plays on the left despite being right-footed, this allows him to cut inside onto his stronger righter foot. In order to make the tactics of cutting in onto his right foot most effective, Vinicius Junior likes to really hold his width. This is to draw the full-back out and create space for himself. Here this is shown against Real Sociedad. The below picture is a couple of seconds before the ball is worked to Vinicius Junior but shows the impact he has and the position he holds. He is keeping his width close to the touchline and by doing so is drawing the right-back a bit further out than he ideally would like to be and creating space between him and the right centre back.

As the ball comes to Vinicius Junior he is going to open himself up and drive with the ball towards the opposition goal.

After carrying the ball towards the edge of the box (another example of his ball progression) he knocks the ball inside the right-back and subsequently has drawn the right-sided centre back over, this then creates a significant gap for Luka Jovic to run into and a simple pass from Vinicius will find the Serbian in a dangerous position.

This is one area Vinicius has improved in – after playing the ball to Jovic he carries on his run allowing for Jovic to return the ball back to him in the box rather than stopping his run. Where he then takes his shot the first time and fires into the bottom left corner to give Real Madrid the lead.

This shows us both Vinicius Junior’s ability to progress the ball and also his trait of cutting inside and the now maturity to follow his run and create a goal for himself.

There is a catalogue of clips I could show of Vinicius Junior cutting onto his right foot but this next one pairs this with his dribbling ability to score a brilliant goal in the UEFA Champions League against Shakhtar Donetsk. Here you can see Vinicius Junior again holding his width just as Benzema is about to play him the ball. He again is creating a bigger gap between the right-back and right-sided centre-back than the opposition would like.

As he receives the ball and starts driving towards the goal he has two options – he can go to his left toward the by-line or he can come inside onto his right foot. It is also important to highlight the run of Benzema here as it gives Vinicius Junior a passing option but also will draw the attention of the right-sided centre back.

Vinicius Junior decides to come infield onto his right however he is surrounded by Shaktar defenders. He elegantly drifts into the highlighted space where he is then confronted with Shakhtar defenders trying to block any potential shots. This space is only available as Benzema has threatened to make the run in behind the right-sided centre-back who then has to drop off to prevent Benzema darting in behind him which has then created that little pocket of space.

He then manages to power home a left-footed shot into the roof of the net.

Hopefully, this tactical analysis and scout report has given you an understanding of Vinicius Junior and his excellent attacking play. His ball progression and dribbling are evident throughout and the intelligence and growing maturity are present in every example. Vinicius is a player growing in confidence and experience and this season is really establishing himself as one of the worlds best footballers.