David Raum 2021/22: The German establishing himself as a creative force in the Bundesliga – scout report

David Raum has been one of the surprise packages this season in the Bundesliga. In his first season at Hoffenheim where he arrived from Greuther Furth after having an impressive season in Bundesliga 2 he has managed to put in some excellent performances as well as some excellent data metrics. The young full-back is emerging as one of the Bundesliga’s best full-backs and is putting forward a strong case to be on the German plane to Qatar at the end of the year.

Raum plays as a left-back or left wing-back but is very much a modern full-back getting forward and making a strong contribution to the attacking play, something we will address further in this analysis. This doesn’t mean he abandons his defensive responsibilities however this is an area he may need to improve to take the next step.

This tactical analysis and scout report will investigate David Raum’s game and some of the key areas that he excels in but also needs to improve on.

Raum often plays as a left-back or left wing-back which allows him to access his full potential. Raum loves to get forward and into the opposition final third where he will often get to the by line. This is shown by the heat map which shows he is very active in both halves but particularly the opposition half. He also keeps his width and doesn’t come infield like some of the elite attacking full-backs do. 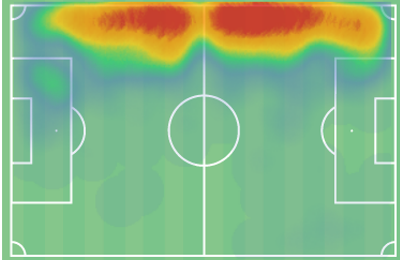 In terms of tactics, this season Hoffenheim has given several different looks however have used a back three the majority of the time allowing Raum to play as a wingback and in turn, allowing him to get higher up the field. 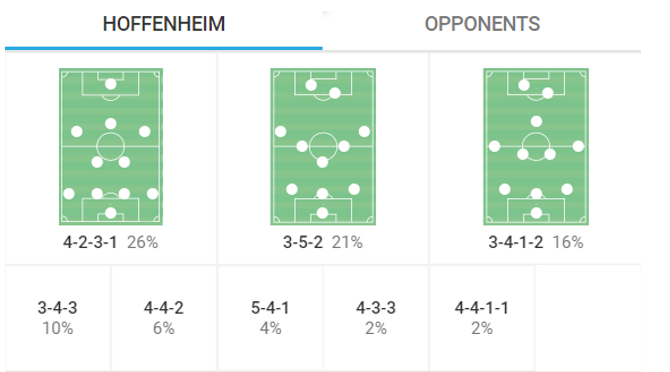 As always, we will assess the data in regards to David Raum’s game, to give us a deeper insight into Raum’s game but also identify his strengths and possibly some weaknesses. These two graphs will look at defensive contribution and two will look at attacking contribution to assess how he is in possession and out of possession. Firstly, we will look at defence and assess his PAdj interceptions and successful defensive actions. PAdj interceptions is interceptions made adjusted for possession, so the metric is recorded if possession in games was 50/50. This is to remove biases that raw interceptions have to low possession teams. Raum is below average in both metrics. We must contextualise that this data set is all Bundesliga fullbacks and does contain some more defensively minded players. 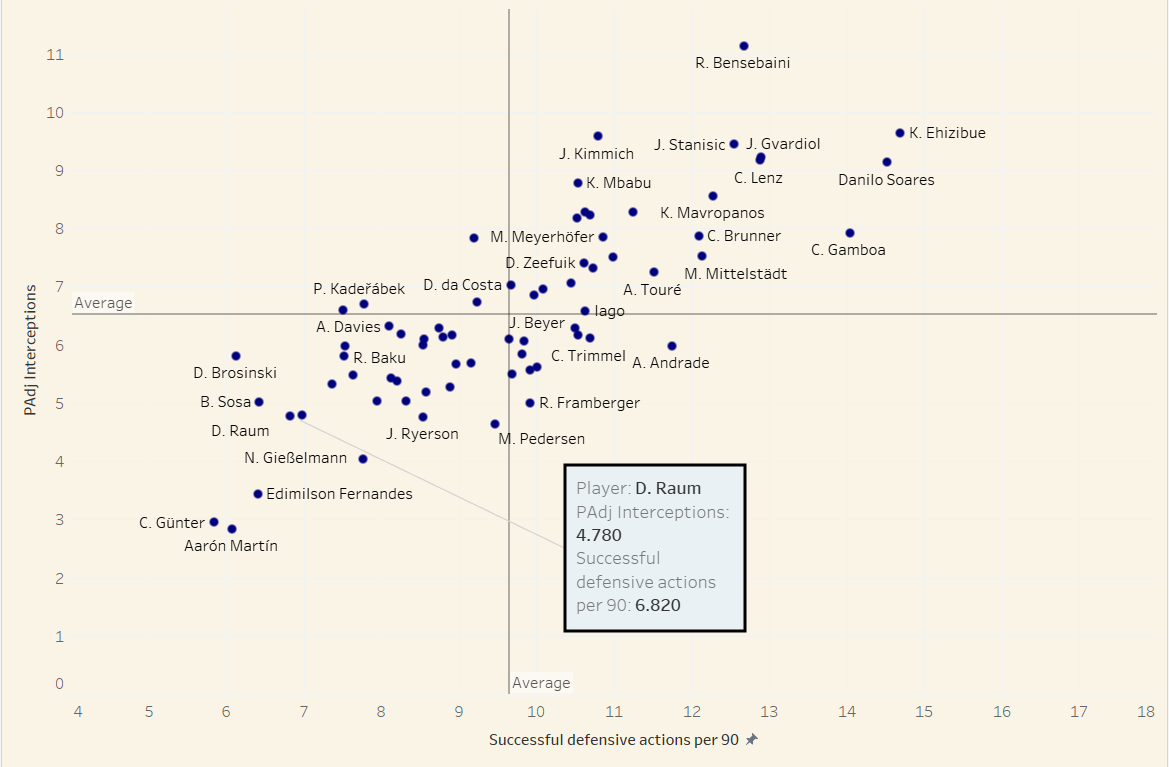 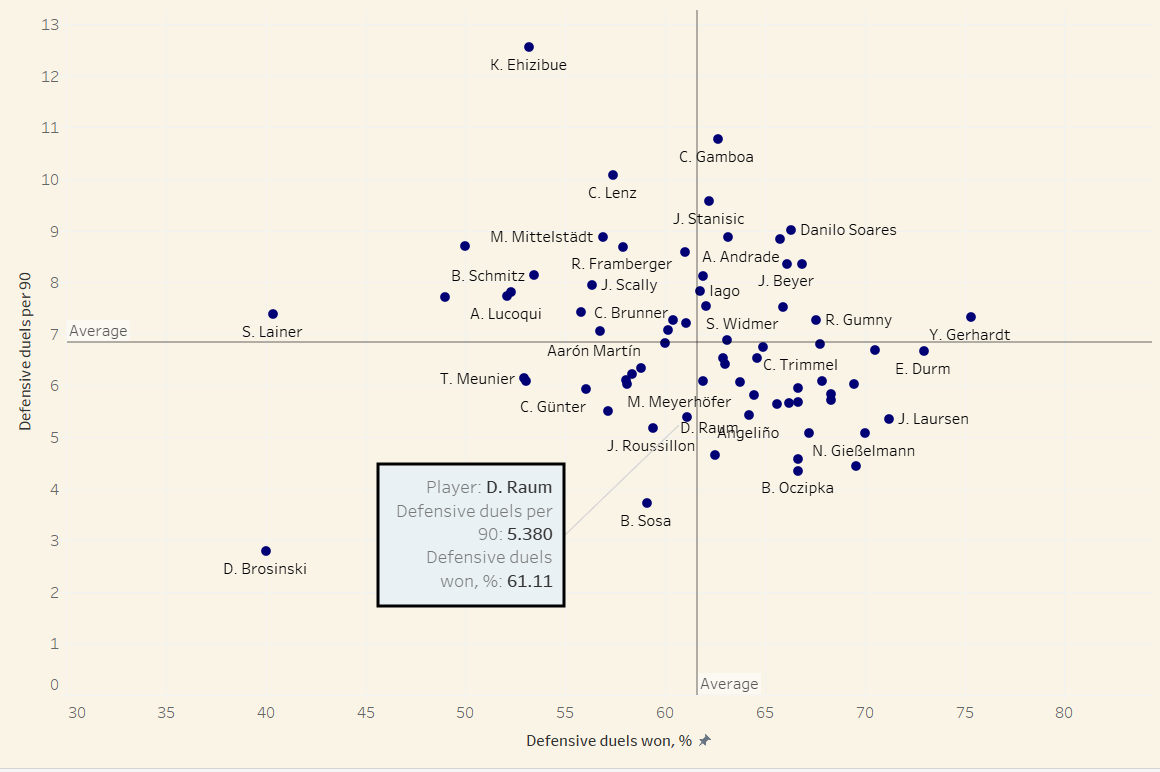 What Raum lacks defensively he definitely makes up for going forward and is one of the best-attacking full-backs in the Bundesliga, if not Europe. Raum loves to get forward and contribute to the attacking play. As you can see below Raum ranks highly in both expected assists and successful attacking actions. He in fact leads the league in expected assists. This is a brilliant metric considering some of the excellent attacking talents in the Bundesliga. 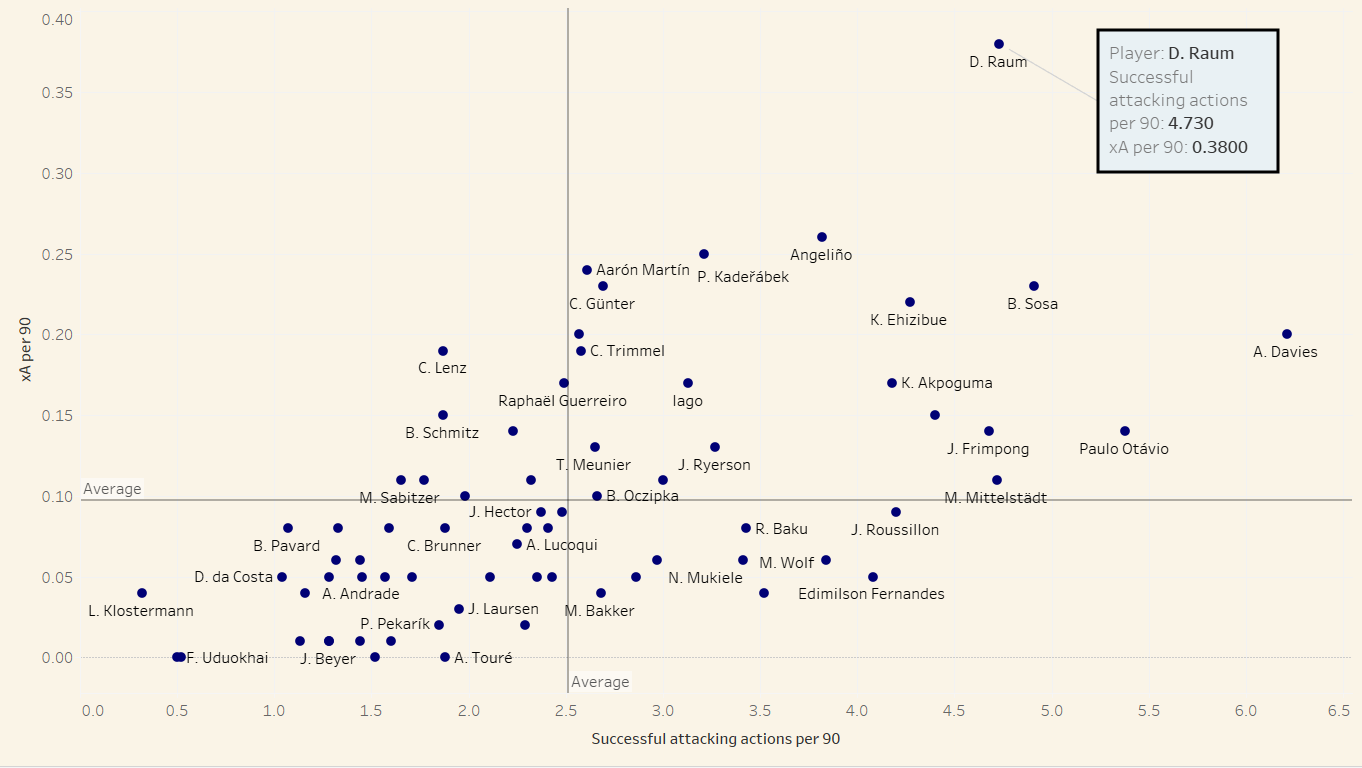 The main way Raum creates such valuable chances is through his crossing ability. When using his left foot his crossing is some of the best in the league and this too is backed up by the data. Leading the data set with crosses per 90 but also having an above-average accuracy of his crosses. 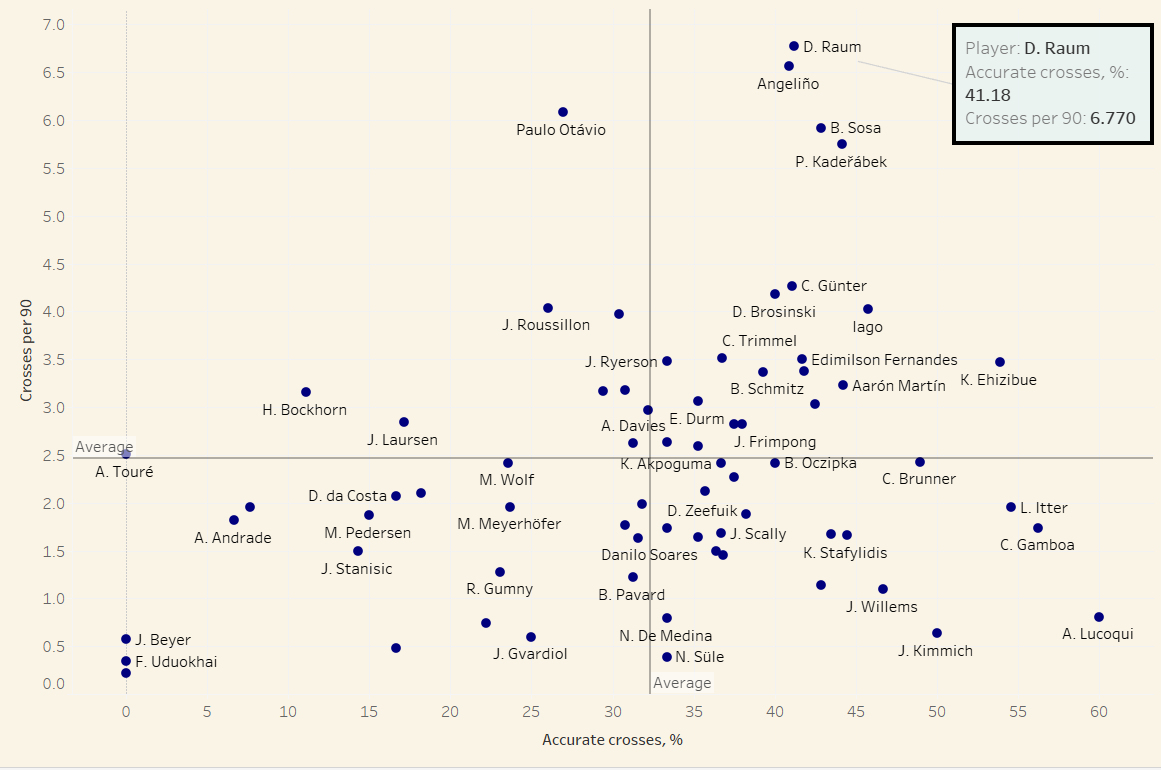 The data analysis should give light to the kind of player Raum is – excellent going forward creating good chances for his teammates and posing a threat in the opposition half, however, he may need to tidy some of his defensive work up in order to make the next step in his career and put himself on the radar of the likes of Bayern Munich and Borussia Dortmund.

Raum is an excellent attacker and leads the league in expected assists which is only bettered by Liverpool’s Trent Alexander-Arnold in Europe’s top five leagues. This makes him dangerous in the opposition half and the way he poses the greatest threat is through his crossing which was mentioned in the data. Raum has an excellent left foot and has great execution when crossing the ball. He also has the ability to get to the by-line and produce cutbacks. The following few examples perfectly demonstrate Raum’s attacking contributions.  The first shows Raum looking to make a forward run as highlighted, Raum is very fit and energetic and loves to make lung-bursting runs up and down the pitch. 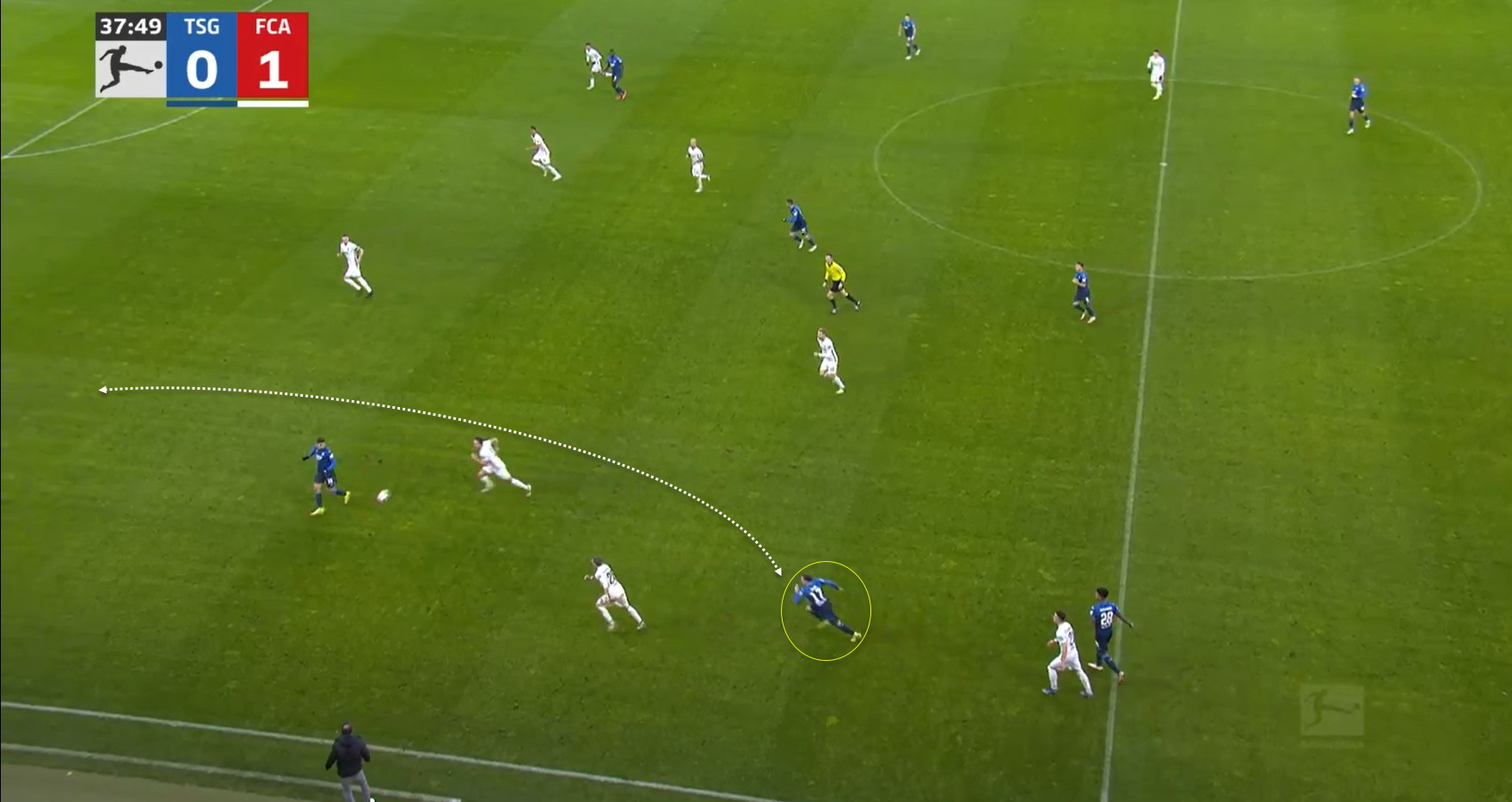 As soon as Raum receives the pass he picks his head up and is scanning his options in the box. This then allows him to identify spaces and teammates in the box so when he goes to cross the ball, he already has an idea of the space and players he is going to hit. Raum will look to carry the ball forward before crossing the ball.

After progressing the ball forward Raum plays a brilliantly precise and timed cross for a goal. The ball is excellently placed out in front of the attacker for them to attack but also away from the keeper to stop them from coming and collecting the ball. Additionally, he plays the cross early so there is space for the attacker to attack the ball.

The next example comes against Mainz, again Raum is making a run forward to join in the attacking play.  In a similar way, Raum is looking to get forward and put a cross in the box.

As the ball is flicked on into the space for Raum to run onto, he continues his run and manages to gather the ball however it is still bouncing and means Raum has to deliver his cross on the bounce a much harder technique. He still manages to deliver the ball into a good area for his teammate to attack. With the resulting header hitting the post and being a real goal scoring opportunity for Hoffenheim.

Both these crosses should indicate the main way that Raum contributes to attacking play with great energy to get forward but also a fantastic crossing technique and appreciation for space and timing.

The data indicated that Raum wasn’t the most active defender being low in defensive duels, successful defensive actions and PAdj interceptions. Some of this will be down to the fact he is often deployed as a wing-back meaning he has less defensive responsibility. The main defensive contribution which will be required from Raum is 1 v 1 defending, due to the nature of being a wing-back.

Raum is an eager defender looking to engage in tackles and interceptions, this often leads to him being rash and making poor decisions. Below we will take a look at a couple of examples of Raum’s 1 v 1 defending and how he could potentially improve in this area.  Here is from a recent DFB Pokal game against Freiburg, You can see Raum is in a 1 v 1 with a Freiburg attacker. He has given the attacker space and not gone too tight which is good defending. The attacker has two options, come inside or go towards the by line. Raum is doing his best to show him the line. 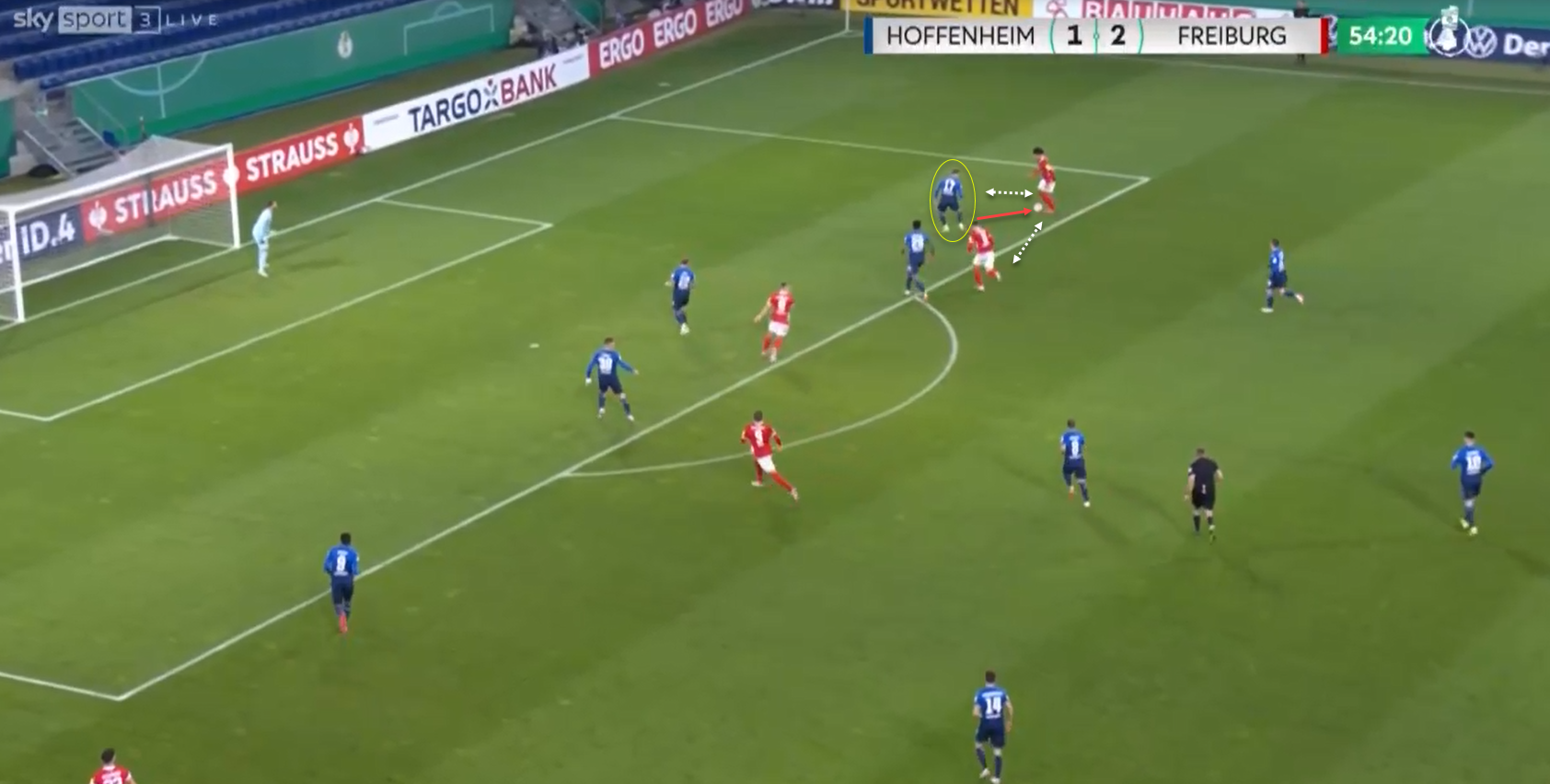 Where this 1 v 1 goes wrong for Raum is his footwork and body positioning. His footsteps are too wide and slow which means his feet get too far apart and he cannot move his feet quick enough when the Freiburg man comes inside.

The Freiburg man can then come inside and fire a shot off to extend their lead, as shown below.

Footwork and making sure as a defender you are using lots of quick small steps is crucial to 1 v 1 success. This next example again shows some sloppy footwork from Raum. This time the attacker has more room to work with as they are higher up the field.

This time Raum takes a step too deep, and this then creates a space inside for the Borussia Monchengladbach attacker to attack inside. This is caused by slow and heavy footwork which at the top level can be punished. Leaving Raum to make a lunge which the attackers breakthrough and they are now on the attack. 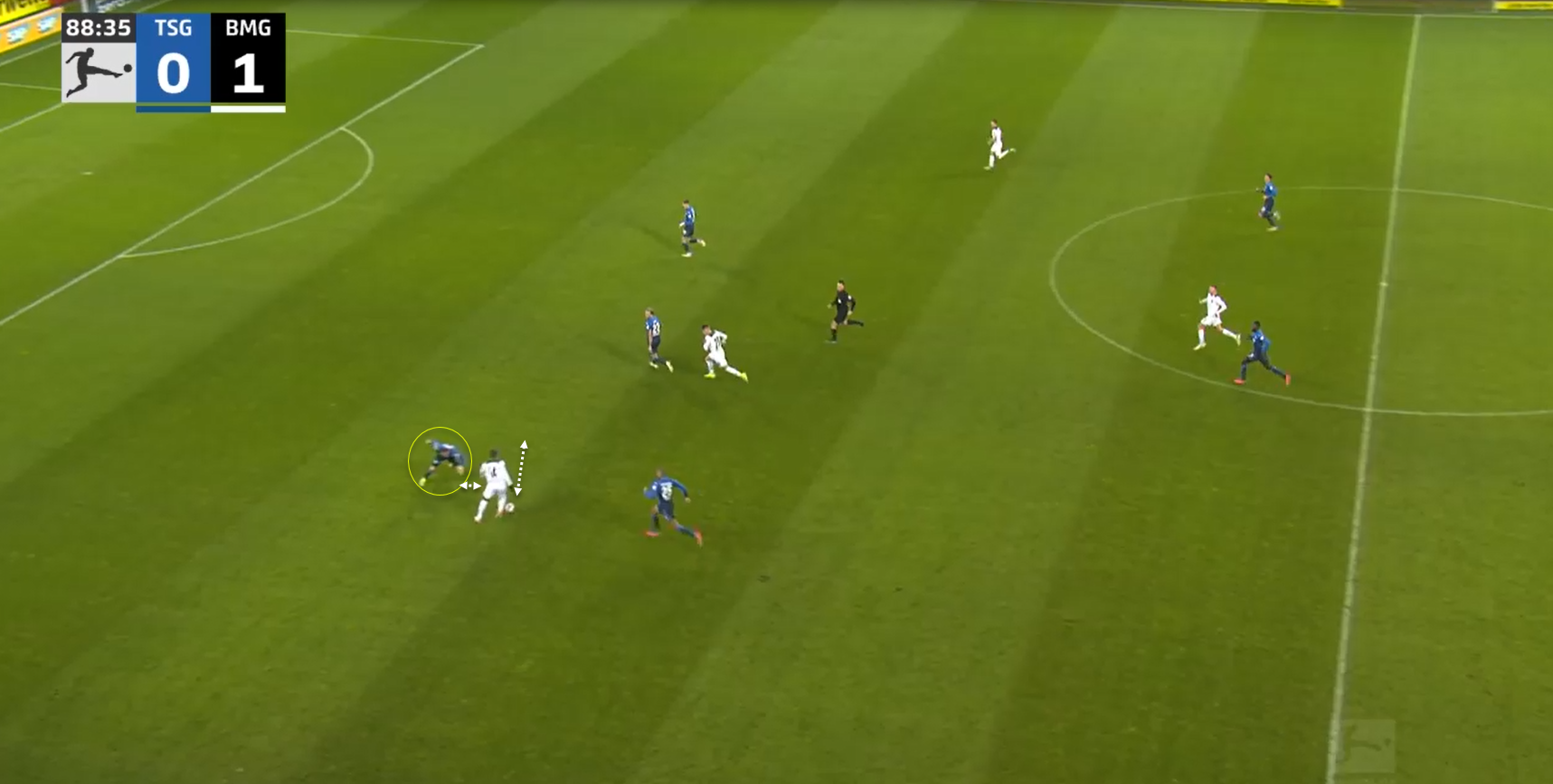 These examples show that Raum is not a complete defender and can certainly improve some aspects of his game.

This scout report and tactical analysis hopefully show what kind of player David Raum is using both data and some traditional analysis. He is very much a modern fullback or wingback where attacking outputs are in some ways more important than defensive solidity. With the attacking output and contributions, Raum makes it can be forgiven he isn’t the most complete defender and is certainly a player who has a bright future in the game.