Full-backs do not traditionally dominate the headlines, but they are more important than ever in the modern game. Over the years the roles and positions around the full-back position have definitely evolved. A manager who has played a huge part in this evolution is Pep Guardiola. This tactical analysis examines how the least fashionable position on the pitch has become integral to the success of Guardiola’s philosophy.

His time at FC Barcelona outlined his attacking intent. Using Jordi Alba and Daniel Alves as more offensive players than their positions suggest. At Bayern München, Guardiola applied a new concept called the inverted full-back. This refers to full-backs moving more into a central position. Now at Manchester City, the Spaniard uses a mixture of both to dominate football games. His ever-evolving tactics have given the footballing world another understanding of the full-back position. In this tactical analysis, we will take a look at the key principles behind the different positioning of the full-backs.

The idea is to move the opponent

The first principle occurs when the goalkeeper Ederson Moraes or one of the centre-backs possesses the ball in the build-up phase. Consequently, the full-backs have to cover the full width of the pitch by hugging the sidelines. In this case, Kyle Walker and Benjamin Mendy are providing width during the build-up phase.

Secondly, as soon as Manchester City progress to the middle third. And one of the centre-backs, Nicolas Otamendi or Fernandinho, has the ball at its feet. the full-backs need to recognize that they have a second task. Depending on where the ball is, either Walker or Mendy make themselves available next to the centre-backs. When the ball is on the left, the right-back moves inside. When the ball is on the right, the left-back moves inside.

As a consequence, Manchester City are temporary playing out with a back-three. The structure aims to stretch the first line of the press and force the second line to engage. And the width of the back-three increases the size of the half-space so it makes it easier to progress. 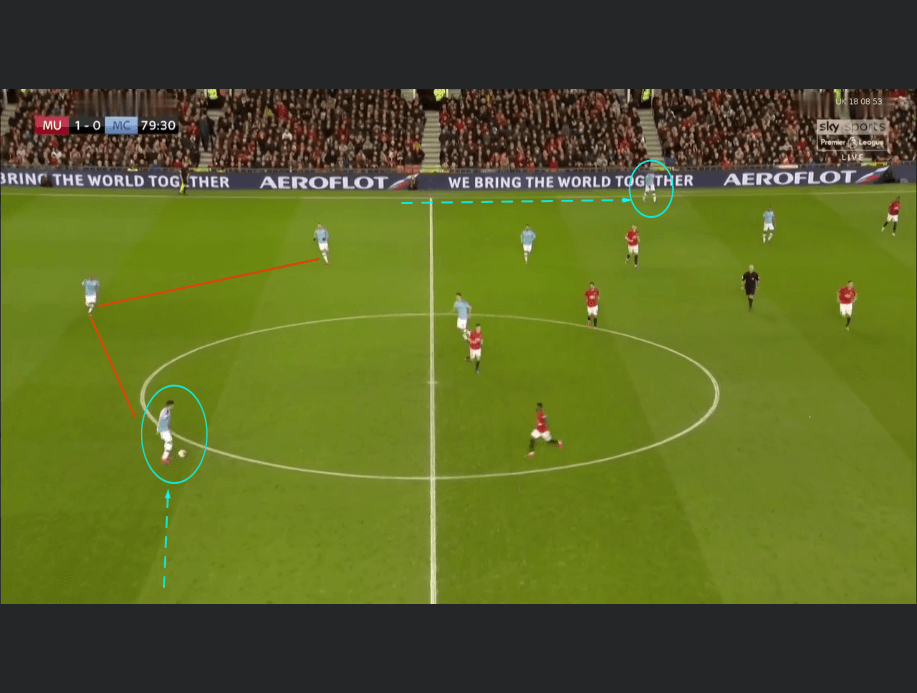 Guardiola’s men normally just cover the centre and both half-spaces when building in a back-three shape. If needed they will occupy the outside as well with these three defenders. Instead of one of the full-backs moving next to the centre-back, the full-back now moves more to the sideline. This happens when the opponents’ winger chooses to press via a curved run. With this tactic, the winger tries to cover shadow the pass to the full-back and at the same time press the centre-back on the ball. When Walker or Mendy occupy the wide lane and move vertically the opposition’s curved run gets nullified. 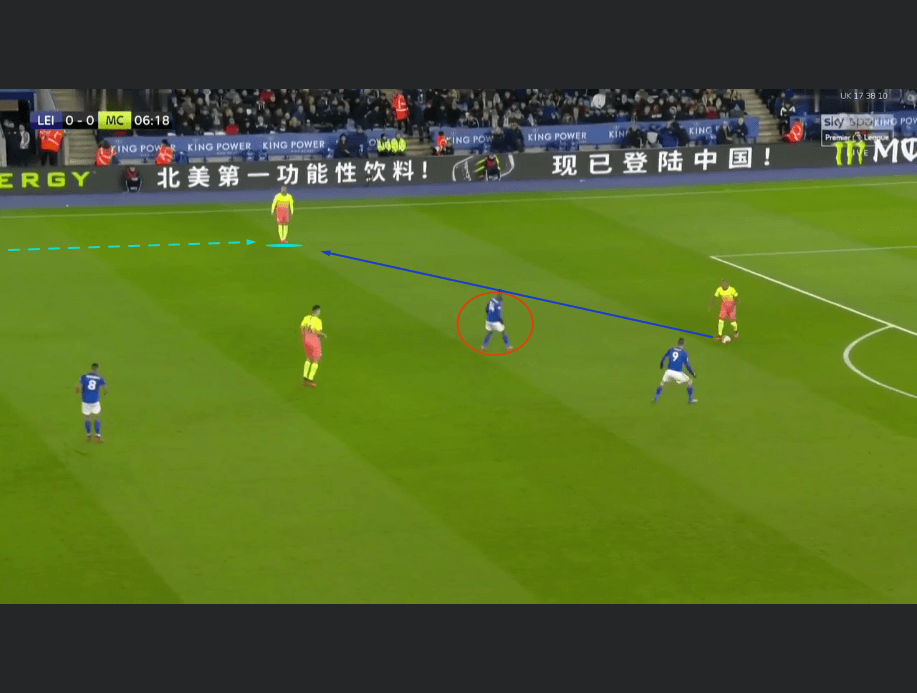 Above we discussed how the Premier League side avoids the opposition press. The below image shows how City try to attract the opposition to them. The position of Walker and Oleksandr Zinchenko is more inside. By playing short passes from the full-back to the centre-back, City tries to provoke the opposing team to press. As this is in nature to step out and pressurise, space opens up between the midfield and defensive line. The moment City recognises space opening up they pick up the pace, break the lines, and try to create a chance. 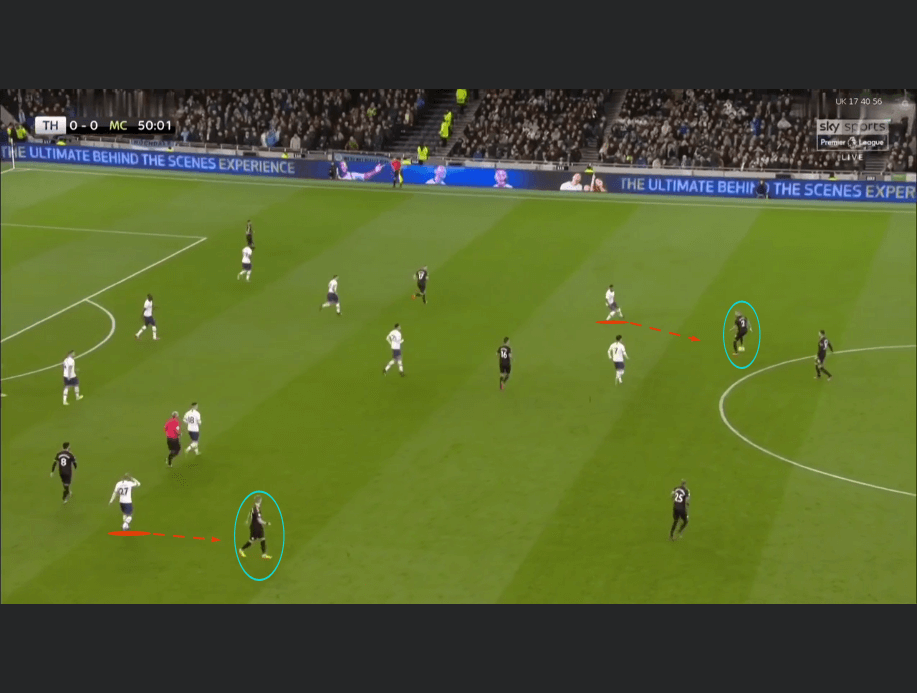 Lastly, in breaking the opponents’ lines and creating goal-scoring opportunities, the full-backs play a huge part. Guardiola loves to create a numerical superiority through the middle. This superiority gives them more chances to break down the opponent. Consequently, Manchester City’s wingers are isolated on the sides in a one versus one battle. This means that the centre has to be packed with as many players that are possible. The full-backs play their part by moving inside and creating an overload in midfield. 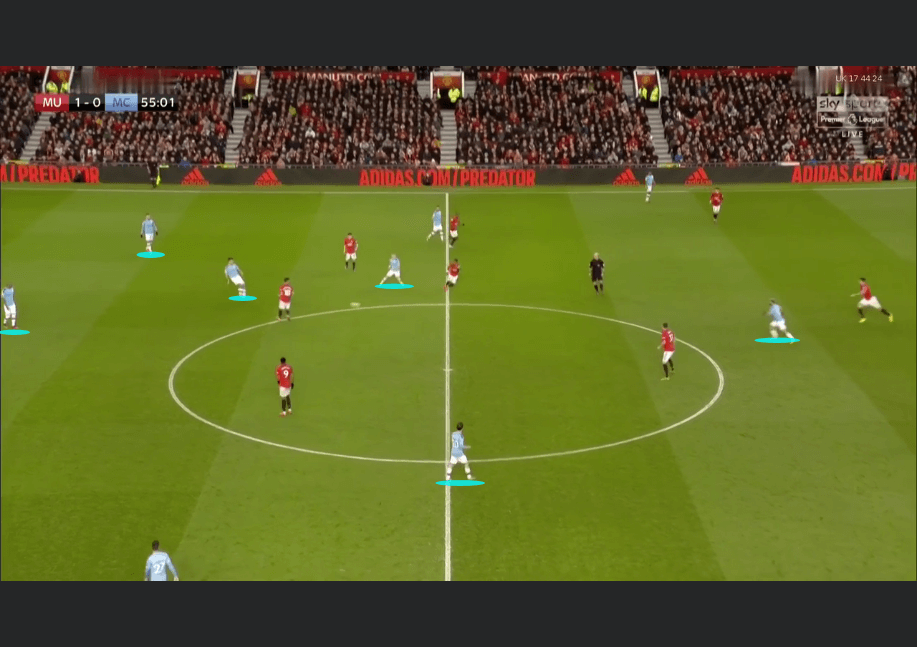 That Manchester City are a possession-based team is an understatement. By playing on the front foot every game, the distances between each player have to be right in order to break down the opponent.

As a result, the backline holds a high line with a lot of space in behind. Because of the giant space in behind, the obvious weakness for City is to prevent the counter-attack. With Ederson, the ‘Sky Blues’ have a goalkeeper who isn’t scared of coming off his line and controlling this space. But as this space is so big, Ederson on his own isn’t enough.

The full-backs also play a part in preventing a ball played in behind and an attacker running onto this ball. The solution to prevent a dangerous counter-attack is for the full-back on the ball-far side to support the midfield by moving inside.

The benefit by moving inside is not only to protect the centre and to prevent the transition from attack to defence. It also gives the player on the ball another option in the centre when City are in possession. As width is essential in Guardiola’s philosophy, the winger provides this on the far side for City, with Riyad Mahrez providing this in this example. 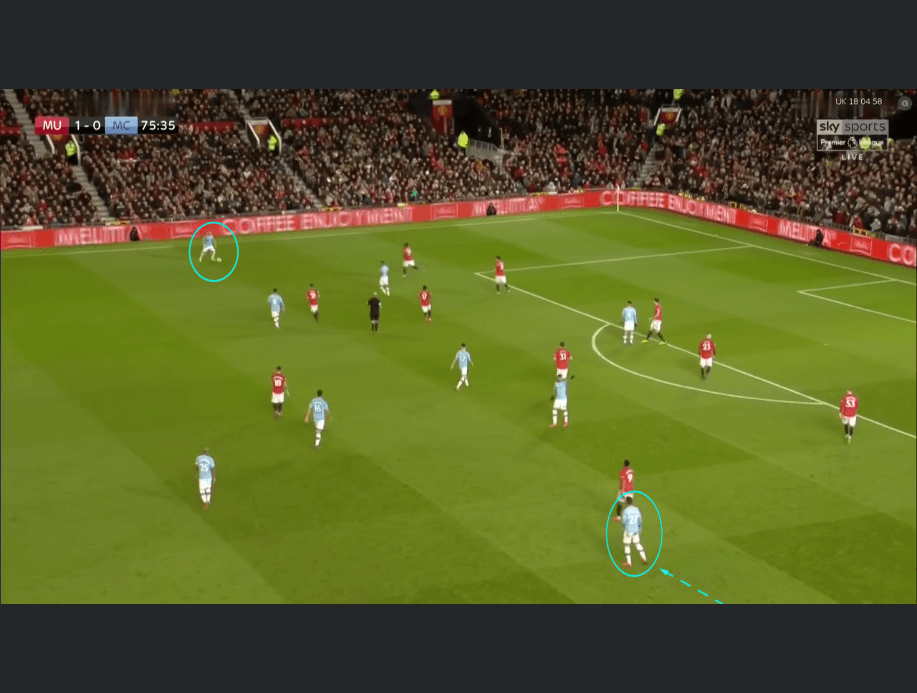 When the full-backs arrive in the final third, they have more freedom in choosing how and where to run. The only rule is that at all times one player has to keep the width by occupying the outside lane. In other words: ‘the full-backs and wingers are dependent on each other’s movement’. The player keeping the width at all times depends on the non-verbal communication between the winger and the full-back. In this case below Mendy stays wide while Bernardo Silva occupies the half-space. This ensures that the opposition’s backline is pinned. This means there is a two versus one situation on the flanks.

Also, note that this specific movement between winger and full-back isn’t only horizontally. Below shows that the winger is allowed to drop deep while the full-back moves forward to stretch the last line. 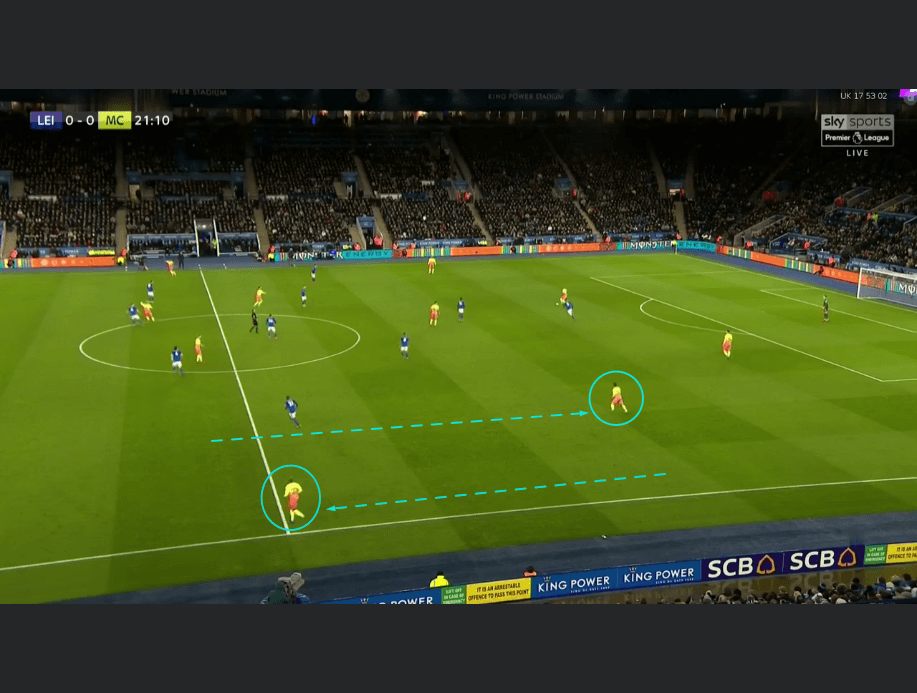 Another offensive movement performed by the full-backs is the underlapping run. When the ball is located on the side by a City winger, the opponents’ full-back normally steps out to press. This creates space between centre-back and full-back. In this instance, Walker exploits this channel. The right-back penetrates at full speed and receives the ball in a dangerous area. 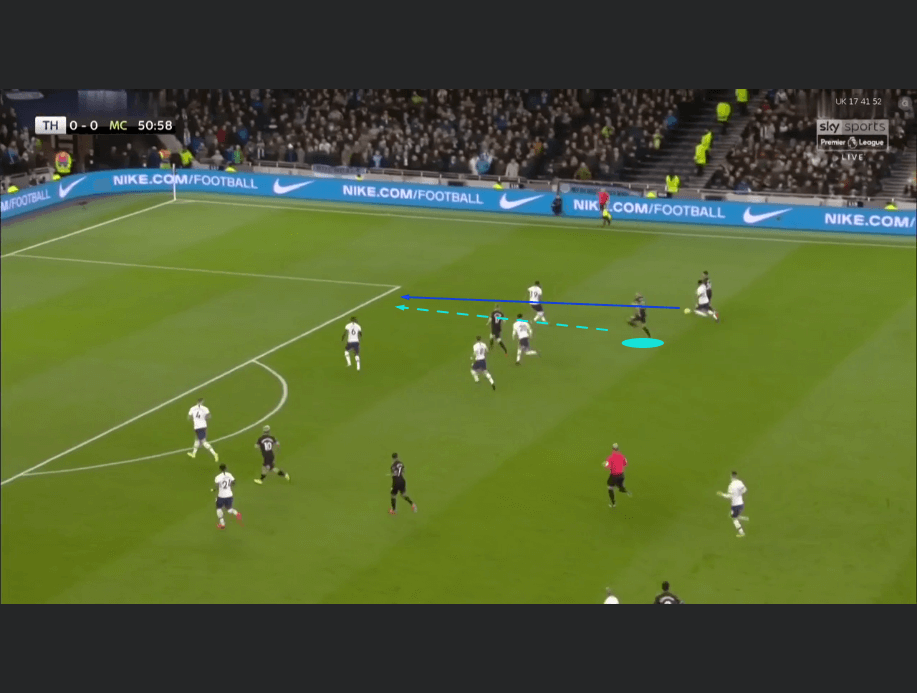 Contrary to the underlapping run is the overlapping run. The term already clarifies its meaning. The penetrating player is going to run on the outside/around another player. Below shows how Mendy will benefit from Gabriel Jesus’ run towards the half-space. Because of the movement of Jesus, space on the outside opens up. Mendy times his run in behind to find himself now in free space.

As stated above, Mendy doesn’t have a direct opponent by making this run. This overlap reveals another rule in Guardiola’s playbook. Always play to your players’ strengths. Normally Guardiola likes to isolate a one versus one situation. But only if a technically superior player of City is in that one versus one. When Mendy is high and wide it is understandable that Guardiola prefers him to avoid a one on one situation. As full-backs are technically less gifted. 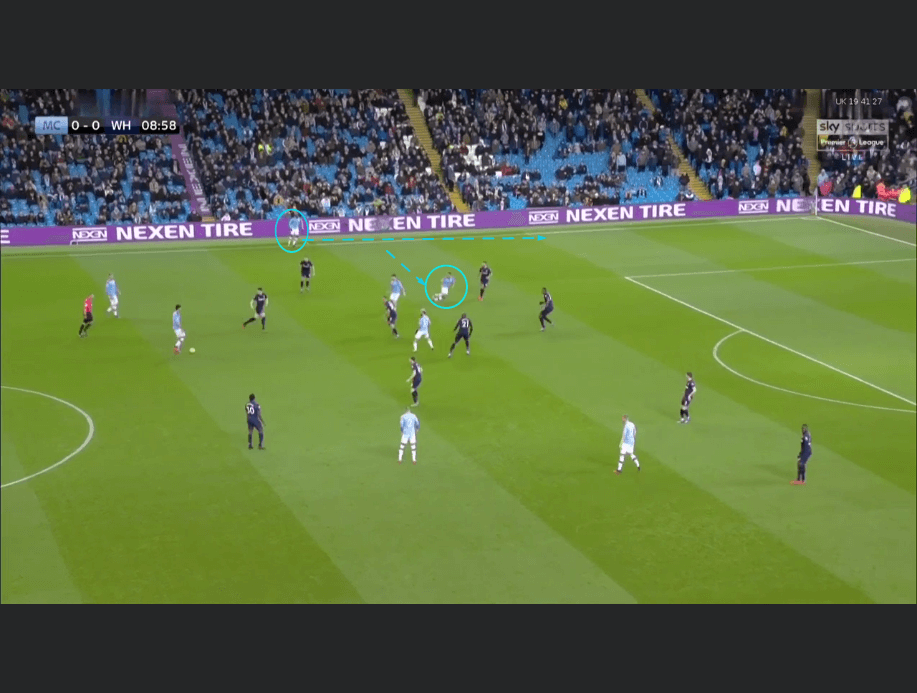 In the summer of 2017, Guardiola bought both Mendy and Walker for over 100 million pounds to fill in the full-back positions for Manchester City. Fast forward two years and the Citizens purchase another expensive full-back in the name of João Cancelo. This underlines the belief the Spaniard has in the significance of this specific position and what value it adds to his team.

When we think of Guardiola’s tiki-taka teams. We automatically think about the technical midfielders like Andres Iniesta, Xavi Hernandez and Kevin De Bruyne. Next to the midfielders and attackers who are more known and applauded, the full-backs play an important part in Guardiola’s philosophy. This tactical analysis shows that the value of the full-back position under Guardiola cannot be underestimated. Only for the fact that the role of the full-back under Guardiola is very versatile. The player who occupies this position has to have particular qualities. These qualities differ from football intelligence to being able to play in small spaces.

The game is becoming more and more complex where teams use positional rotations, dynamic rotations and timed runs. The past shows us that in the future the role of a full-back will only grow more in importance.