Peter Bosz has turned Bayer Leverkusen into one of Europe’s most structured teams during possession. Their possession game is not only aesthetically pleasing, but also successful, as Leverkusen are currently in the top five in the Bundesliga and may possibly qualify for the UEFA Champions League. In this tactical analysis, we will examine the offensive structure of Leverkusen and explain what makes them so exceptional.

During the season, Peter Bosz occasionally switched between a back three and a back four. While he has used the back three nine times already, the back four could be seen 19 times within the starting formation. However, it is important to note that players are allowed to be flexible and should take the position that the circumstances of the game require.

Against Frankfurt, Bosz decided on a 4-2-3-1 formation, like in the image below. 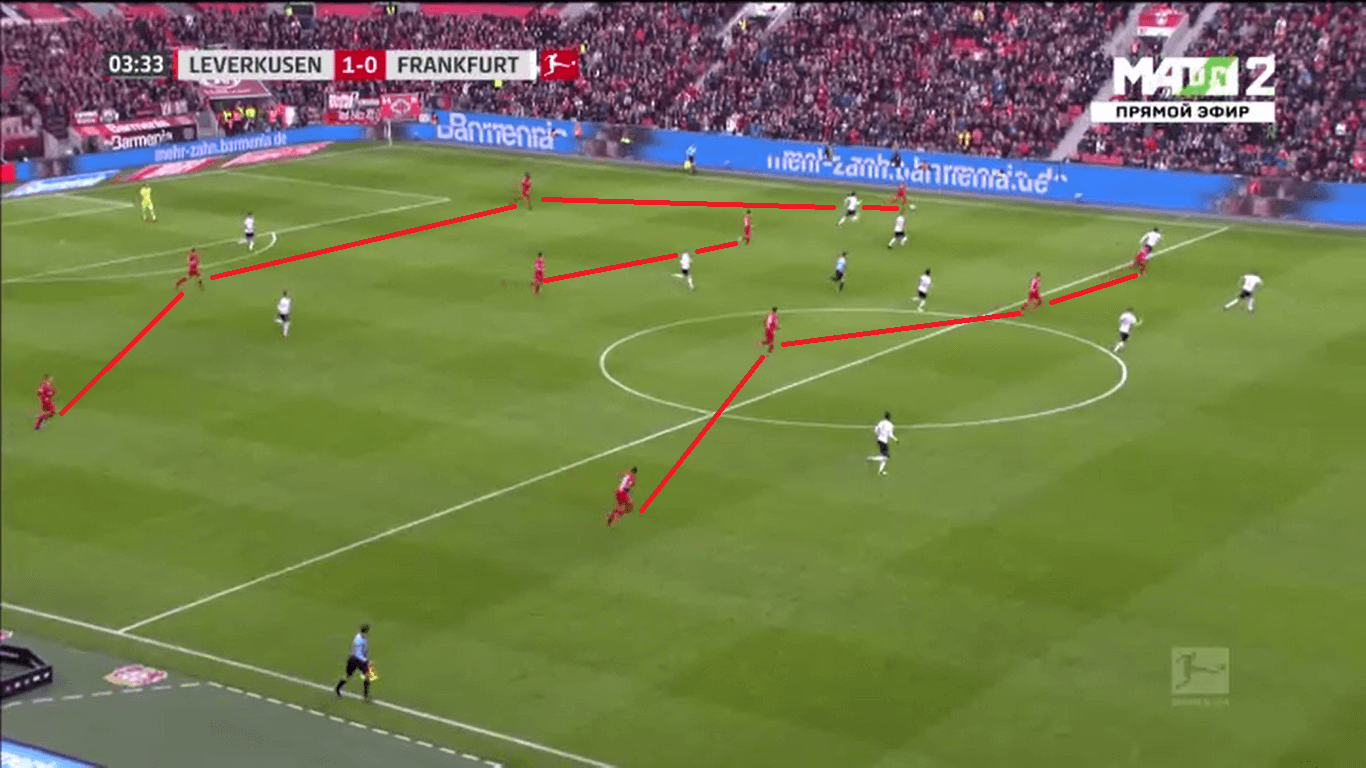 With just one single striker up-front for Frankfurt, two centre backs are enough during the build-up to have numerical superiority in order to progress the ball safely. Thus, the full-backs can push high. While usually Leverkusen try to avoid early passes onto the wing, they can use Wendell’s speed here to progress the ball. Left winger Moussa Diaby starts a deep run, so that Wendell can play it longline.

A much more typical example can be seen in the image below though. As mentioned, Leverkusen are flexible during the game and adjust whenever necessary. 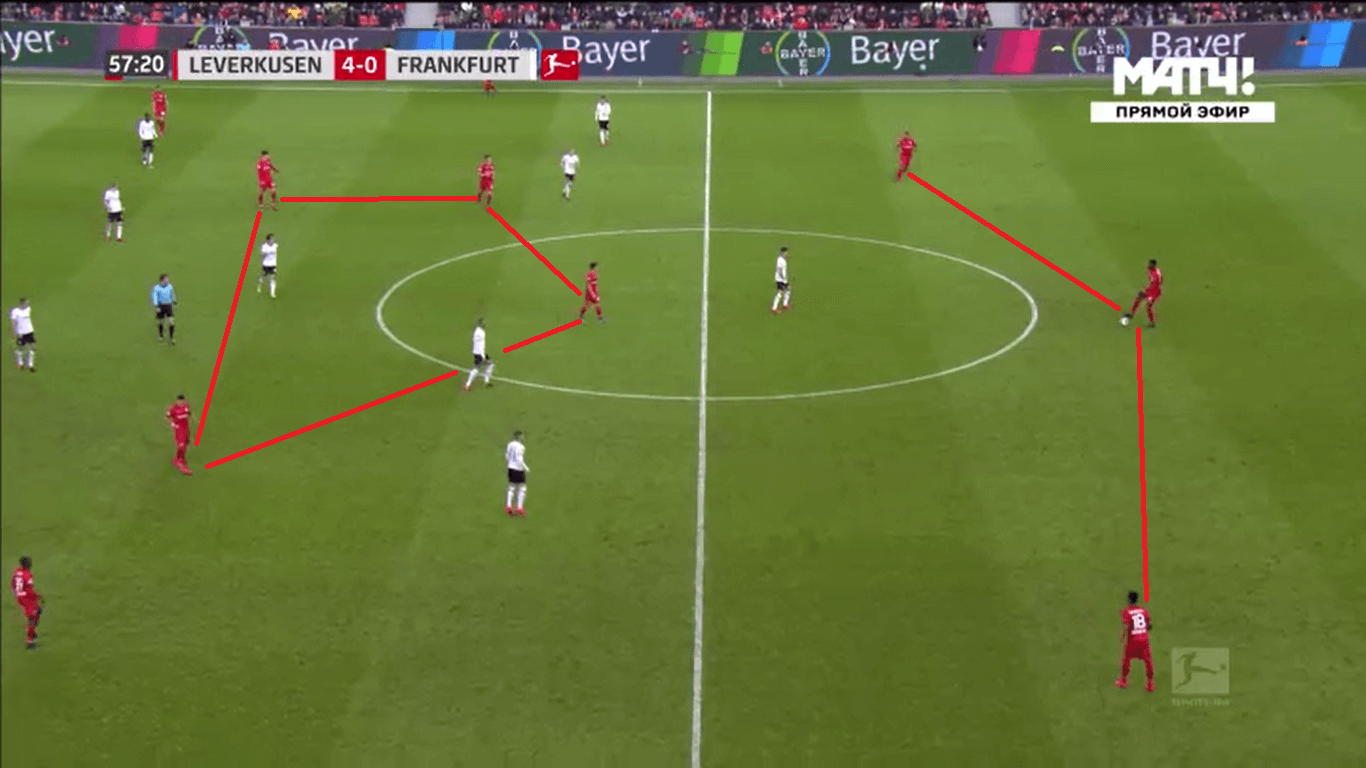 Here, we see that left-back Wendell does not push high, but rather creates a back three with the two centre backs. Frankfurt still plays with one single striker, so the centre back would still be able to make the build-up work. The idea here is to slow the game down and control possession though, as Leverkusen are up 4-0. Statistically, Leverkusen play 236.44 lateral passes per game, while the figures for forward passes (185.52) and back passes (95.56) are considerably lower. In this case, this is a safe option to control the game, while lateral passes still may create holes in the opponent’s defensive structure if they do not shift properly.

Additionally, we see an asymmetrical diamond in the midfield. Typically, you do not see this in a 4-2-3-1, but Leverkusen’s interpretation is slightly different. Since they do not have a classical striker in their roster, they use midfielders or wingers up-front. With Kevin Volland being injured, mainly Kai Havertz occupied this position on paper. In reality, there are two number tens playing next to each other and occupying the space between the lines. As Frankfurt defend in a 4-1-4-1 structure, Leverkusen are able to overload the opponent’s defensive midfielder, see image below. 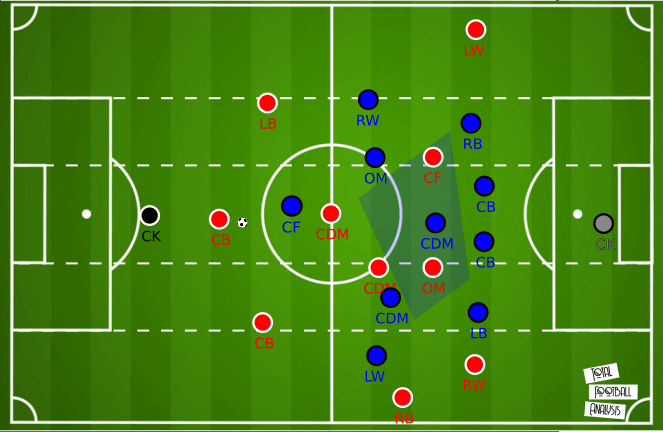 This approach is often seen and one of Leverkusen’s trademarks. They always try to dominate the centre and reach numerical superiority in this area in order to always have a short, central passing option. 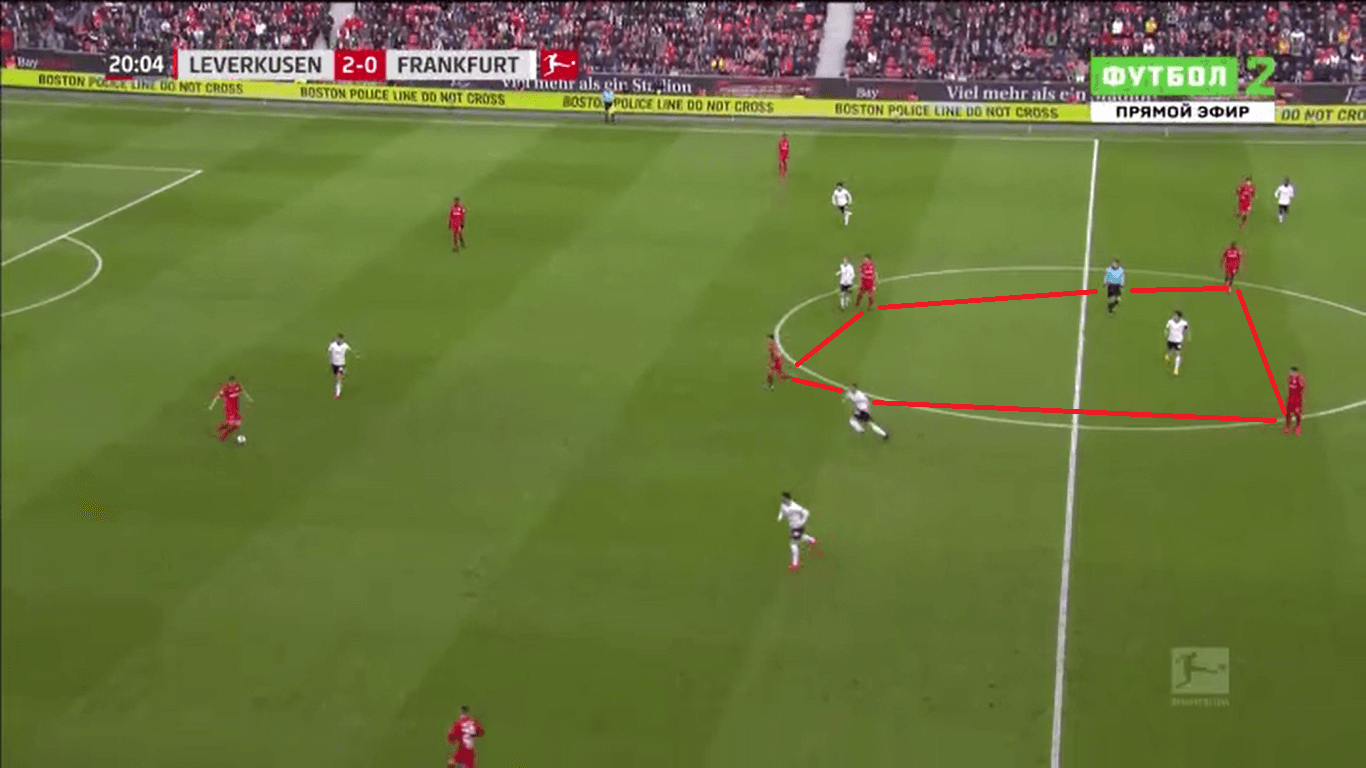 During the build-up, this tactical has the function of progressing the ball safely forward. In the final third though, Leverkusen try to use the half-spaces, as we will later see. Thus, this positioning serves multiple purposes.

When Leverkusen face high pressing teams, they still insist on playing short passes. In order to be able to do that, they make sure that they outnumber the opponent in the own half. Thanks to the technical quality of the players, this seems sufficient. 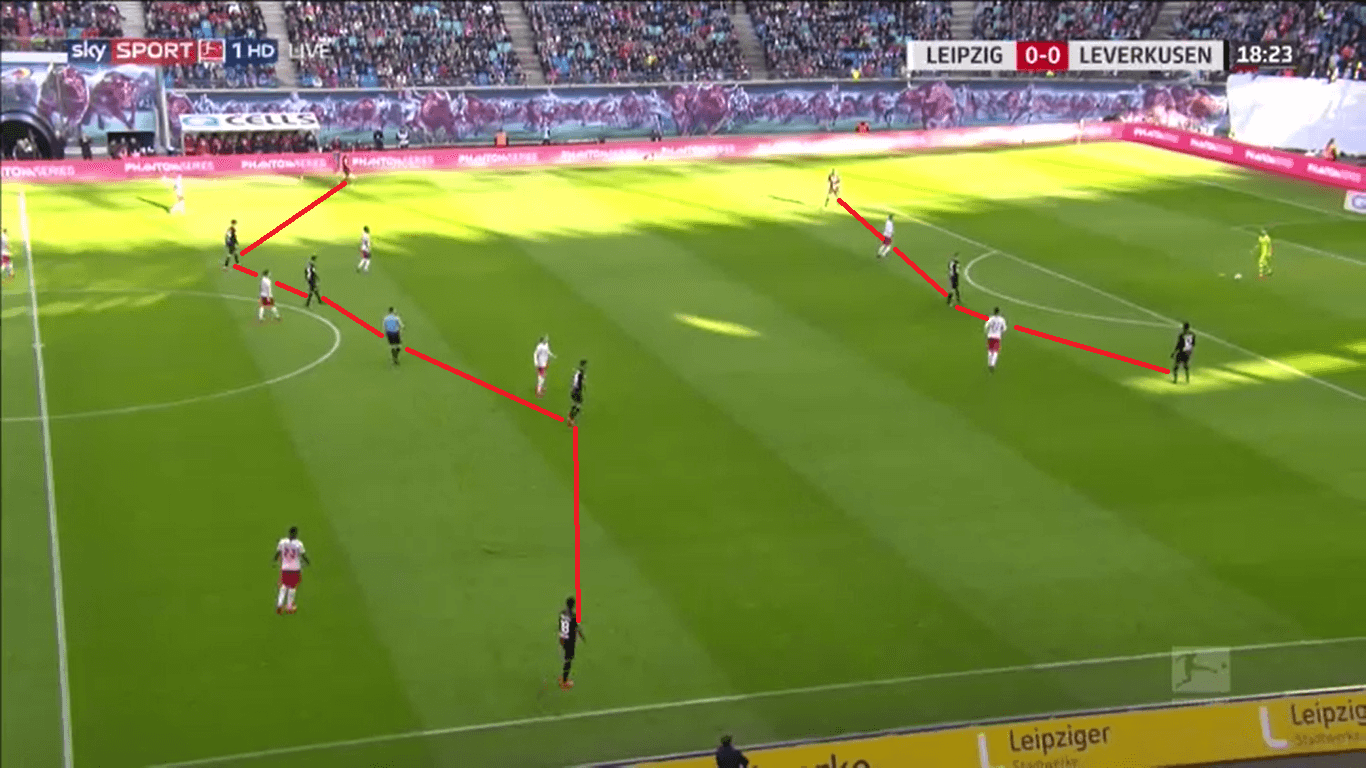 Here, we have an example from the game against RB Leipzig. In the first line, Leverkusen have a three to two advantage, while the second line shows us a five to five equality. In total, with keeper Lukáš Hrádecký, who is also a technically skilled goalkeeper, there is a nine to seven advantage in Leverkusen’s half, which is sufficient to make progress with short passes.

Another approach to push those teams back is to position the attackers, especially the wingers, as high as possible. 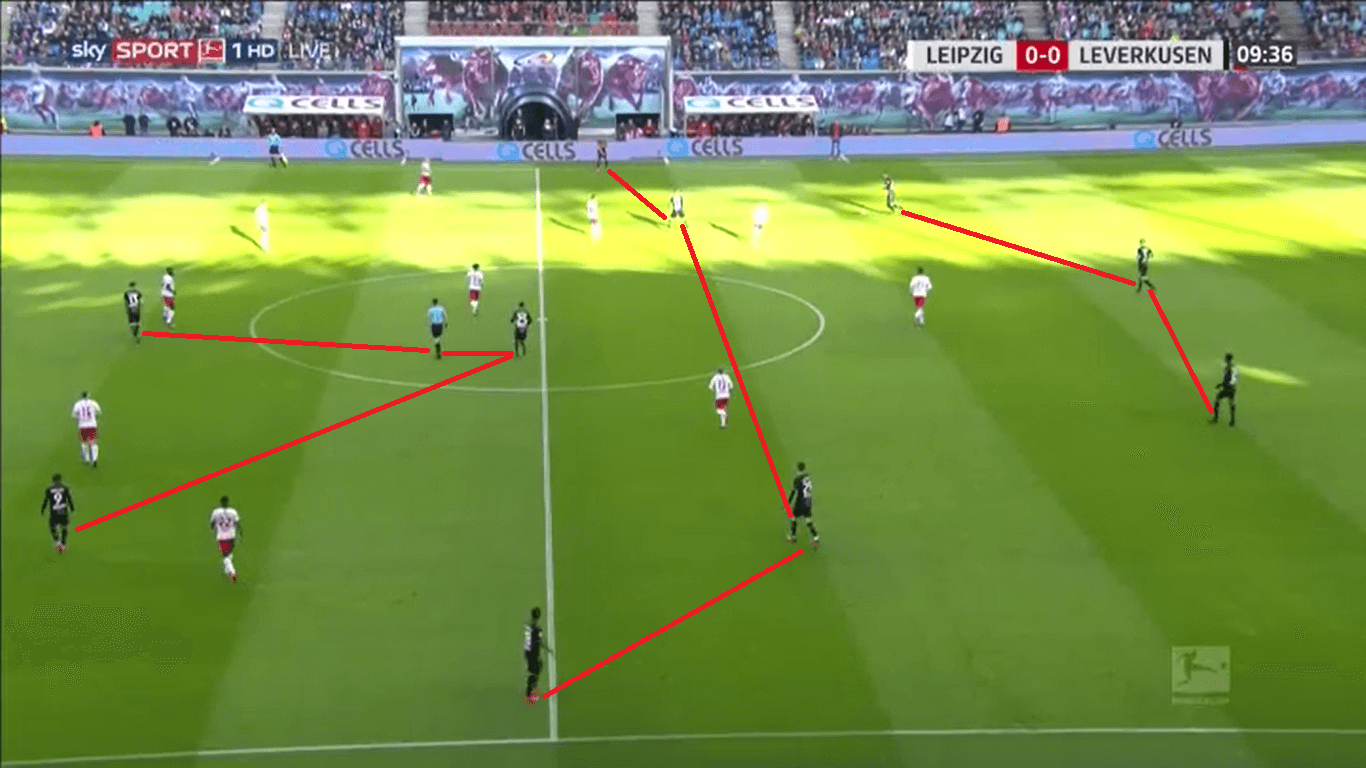 Here, we see Leon Bailey and Lucas Alario who push the opponent’s backline back. In doing so, space in the midfield is created. With players like Bailey, Diaby, Karim Bellarabi or Paulinho, Leverkusen have so many quick players that it becomes difficult for opponents to play with a high backline. Furthermore, in a 3-4-1-2, the midfield four use the whole width of the pitch and stretch the opponent, which also creates space.

On the other hand, Leverkusen are also able to create a 3-3-4 like structure in order to pin down the opponent’s backline. 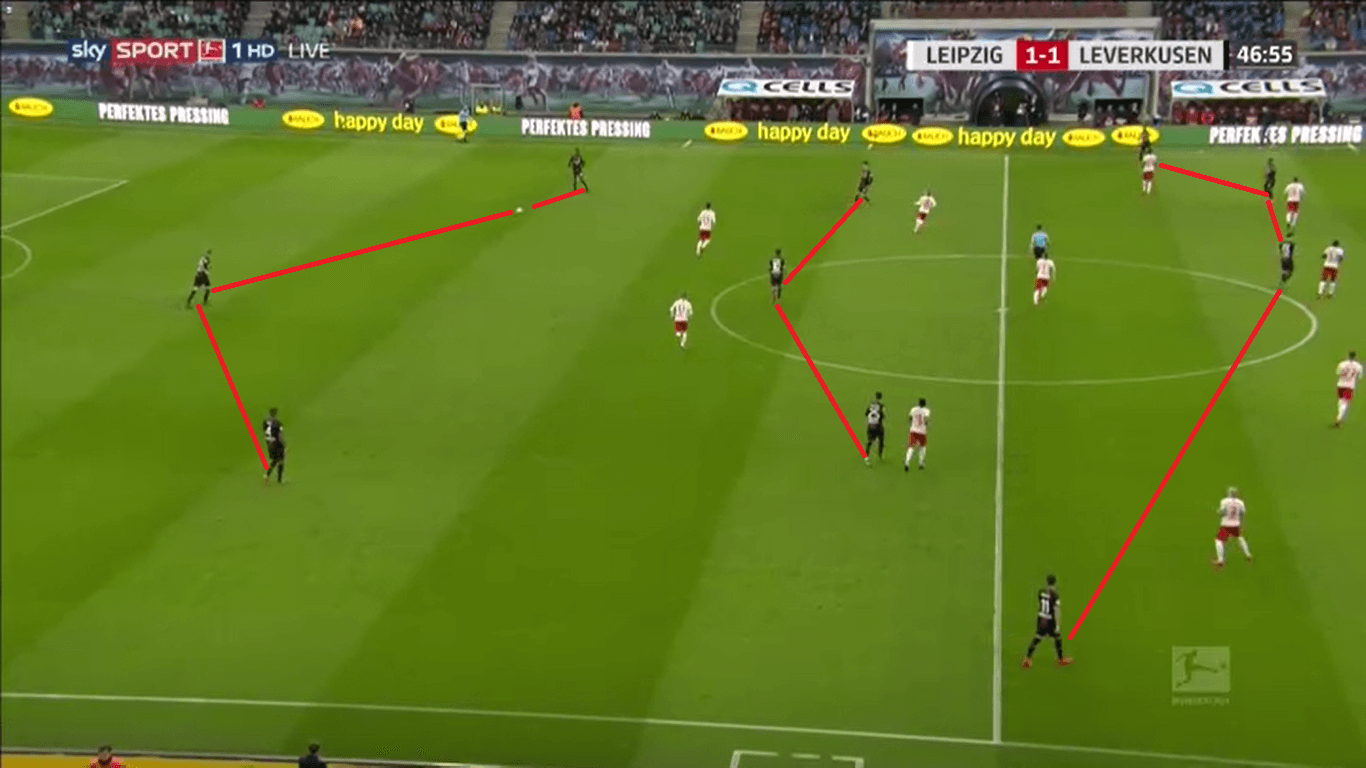 In such cases, Leverkusen would try to play more vertically and break the lines with force. Here, Leipzig’s use of a back five may be one of the reasons for switching to this tactic. Also, the second half had just started. Thus, Bosz might have wanted to put pressure on the opponent coming out of the halftime break.

Occasionally, Leverkusen also uses long balls when the opponent pushes too high. With so many players being involved in the build-up, the opponent is always tempted to man-mark and follow Leverkusen’s players to their own half. 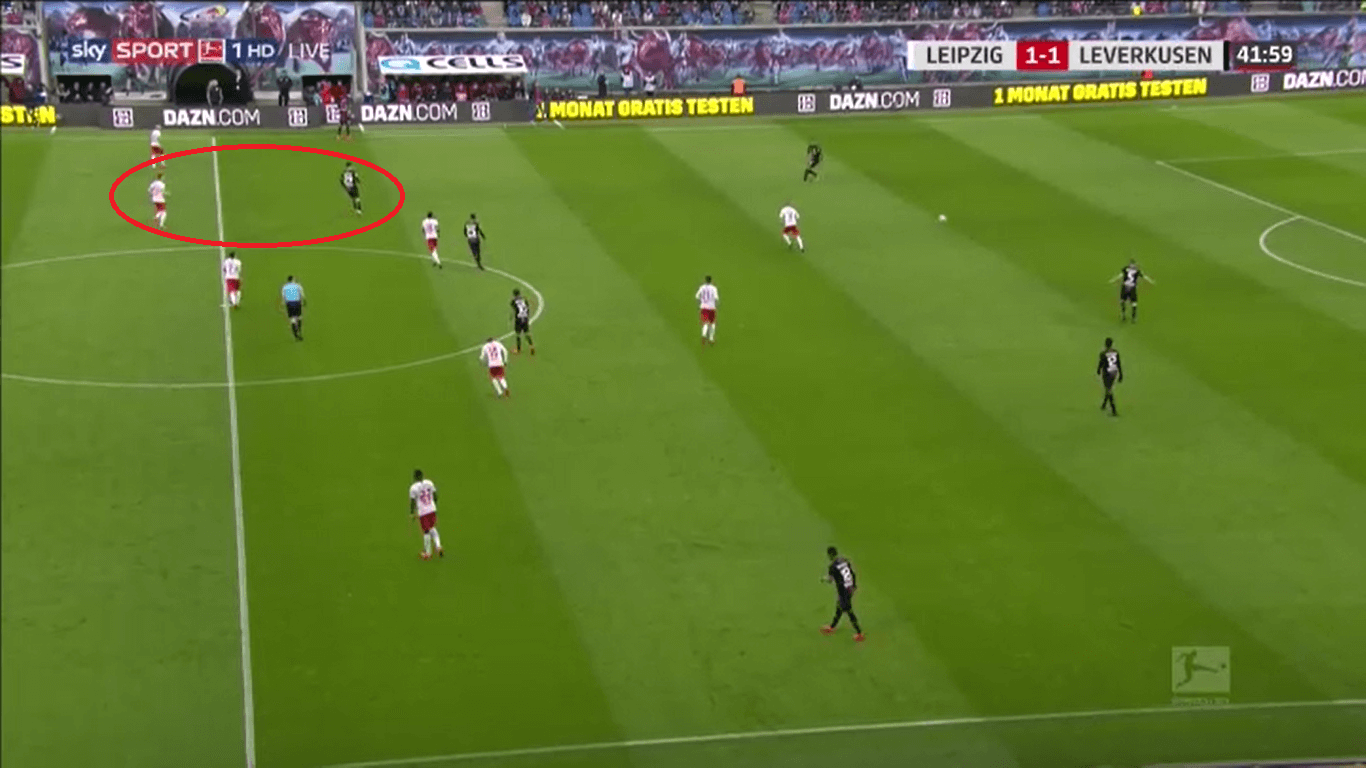 Here, Leverkusen have again all but two players in their own half during the build-up. Kai Havertz has a bit of space and could receive the ball. As Leipzig try to prevent this, the defender closes the distance. 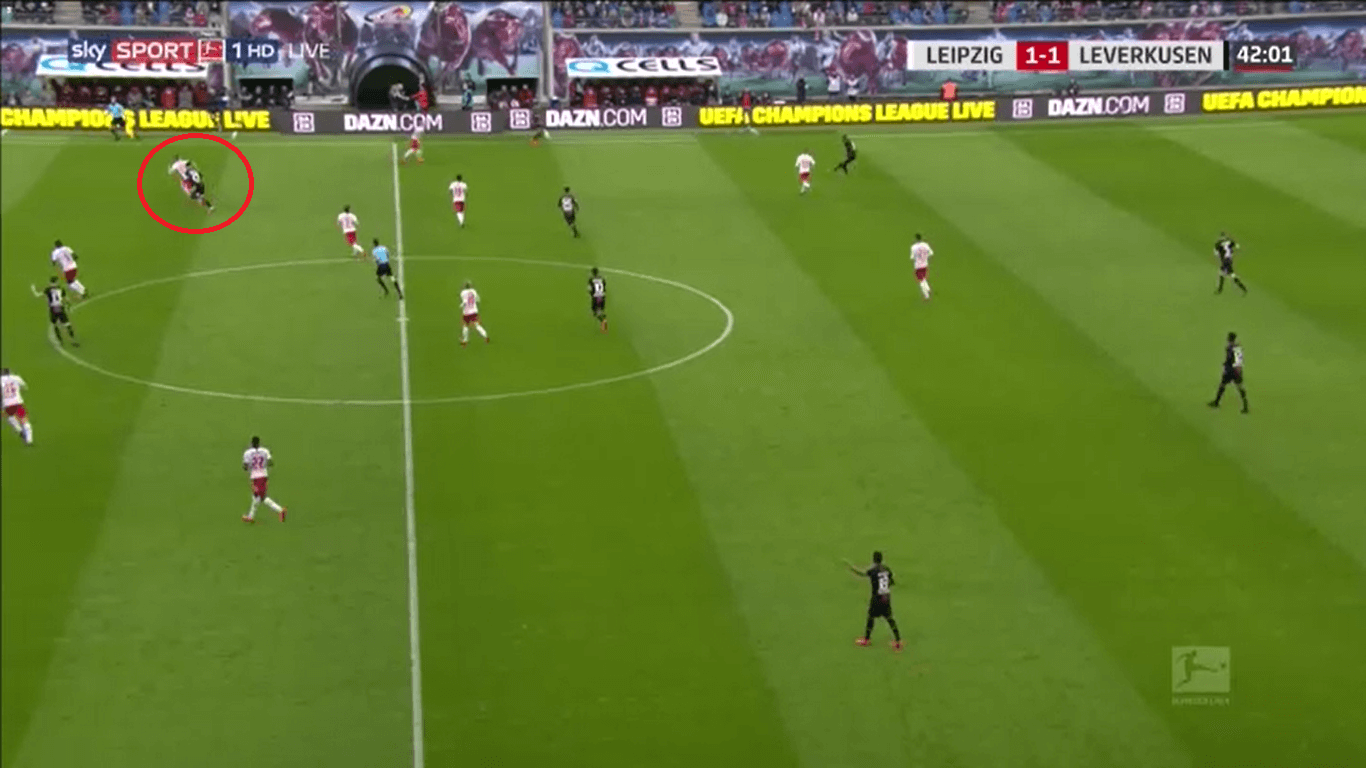 Havertz immediately starts a run and is much quicker than the defender. Surely, this was all planned, as he perfectly receives the high, long ball and creates a dangerous goal-scoring opportunity.

Flexibility is the key

Apart from such individual efforts to create space, Leverkusen also use positional changes in order to free up space. A tactic that is often used can be seen in the image below. 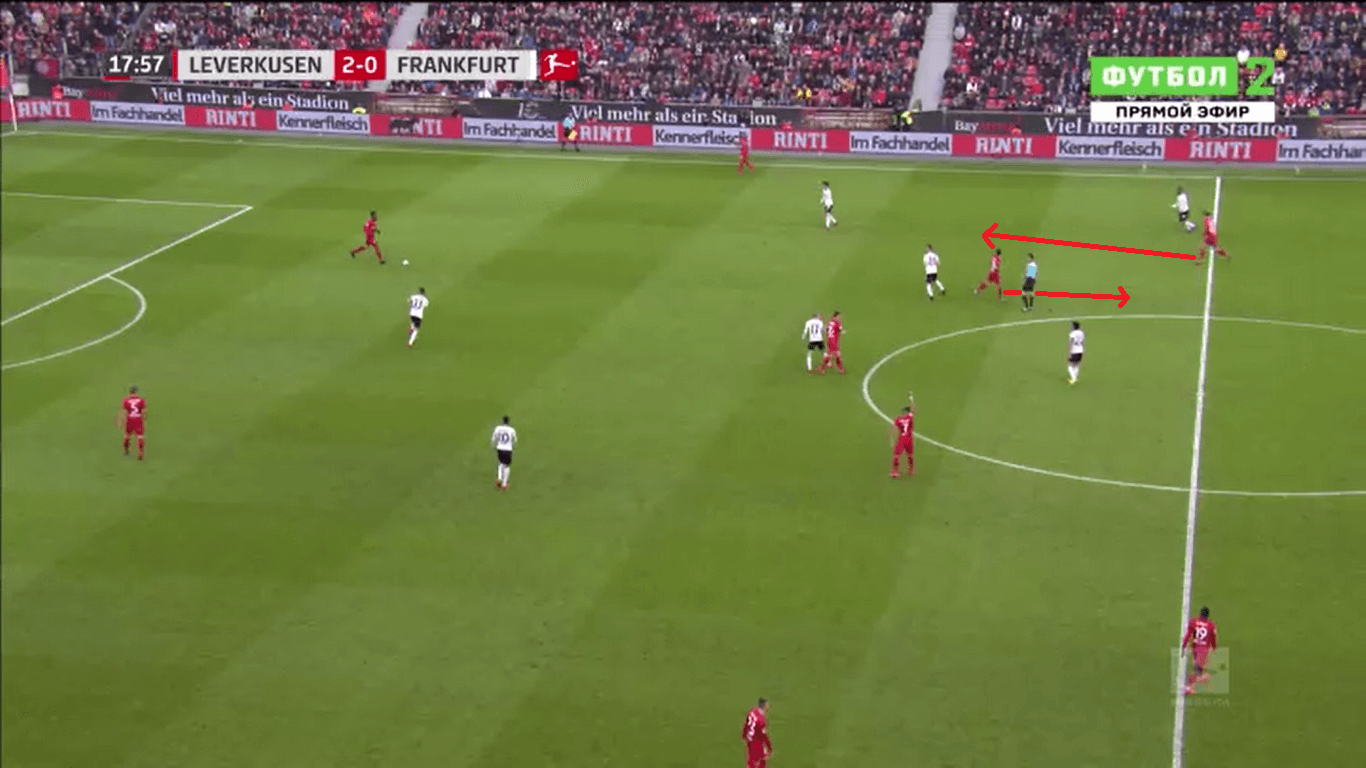 Often, a central midfielder would abandon his position and move higher, while a winger or the centre forward falls back. In this case, the defender marking the winger follows him, while the central midfielder can easily lose his man. This tactic is often used in basketball in order to get a weaker defender onto an attacker and thus create a mismatch. While this can also happen in football, the main purpose is to create chaos and disorder in the opponent’s defence.

The same happens, when players who have a similar role occupy different heights on the pitch. Doing so, an asymmetrical structure is created which makes it more difficult for the opponent to defend properly. 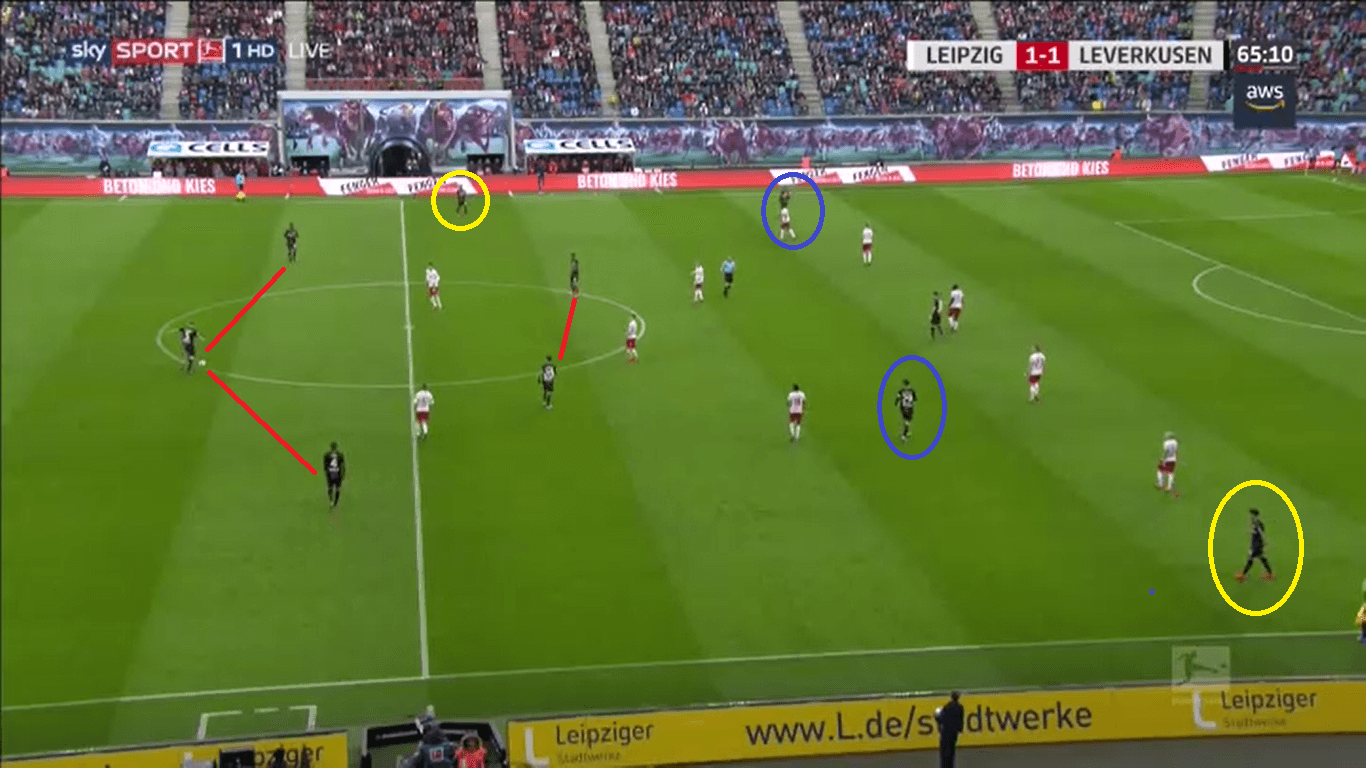 Circled in yellow, we see the wingbacks. While Mitchell Weiser pushes extremely high and positions on the offside line, Wendell on the other wing does not push high though. The reason for this is that there is a lot of open space further back. Instead, Diaby, circled in blue, occupies the high position on the left wing and pins down his opponent. Thus, Leipzig’s right wingback is in a compromising situation, as he has to decide whether to move out and close the space near Wendell or stay with Diaby. Either way, he has to allow Leverkusen to exploit some space. Havertz on the other hand, also circled in blue, moves inside into the space between the lines. The opponent now has to decide on who has to mark him. This creates coordinative and communicative problems and could possibly lead to chaos, if the opponent does not have clear instructions on how to behave in this exact situation.

Centre and half-spaces provide a lot of options

When progressing into the final third, Leverkusen try to use the centre and the half-spaces. The reason for this is that this gives more possibilities to continue the attack. 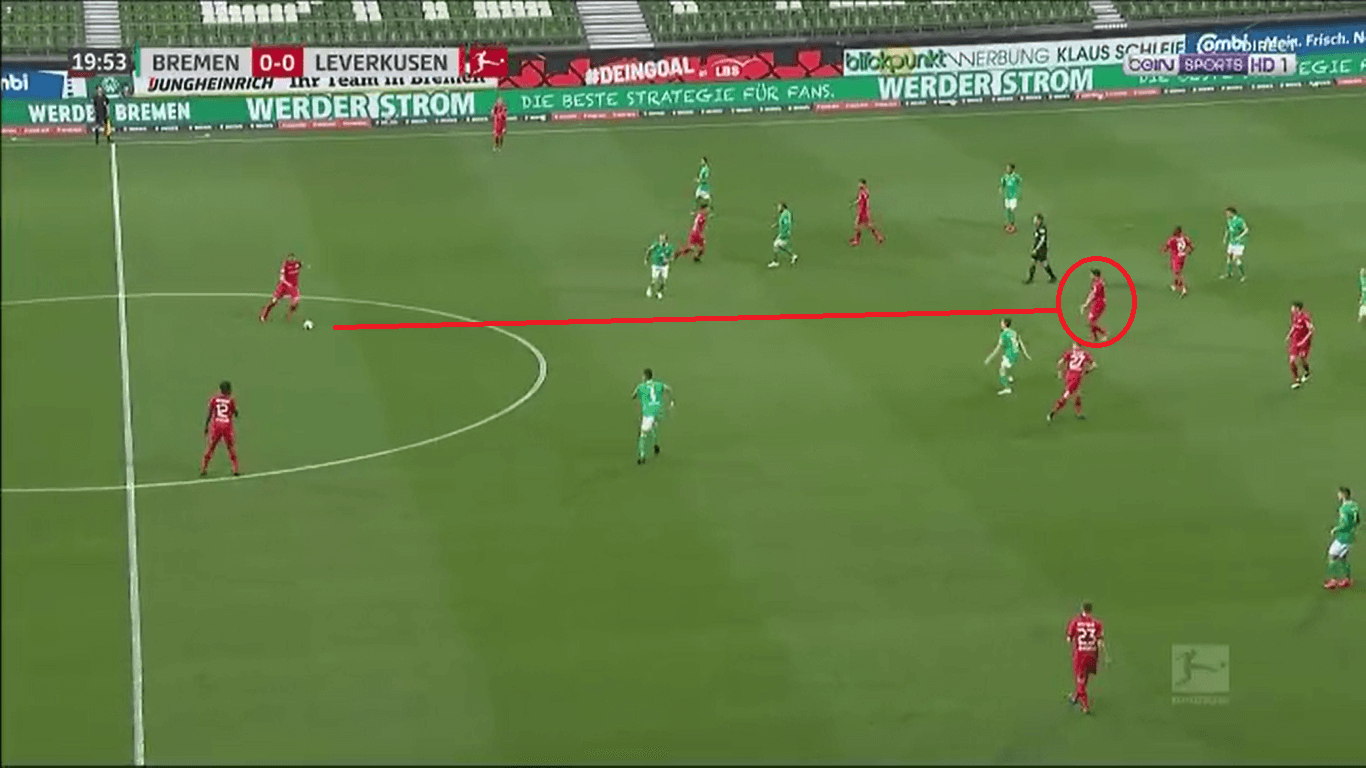 Thanks to the great passing quality of the players, Leverkusen are often able to play such great through balls. What is extremely important when playing such a vertical ball is that the receiver is either able to turn or lay off the ball. Otherwise, with his back to the target, it becomes difficult to continue the attack. As can be seen in the image, a turn is possible. Additionally, there are three players near the ball, so a lay off is also possible.

A pass from the centre to the half-space eliminates these problems though, as mostly the receiver can easily continue the attack. Whenever possible, Leverkusen try to keep this in mind. 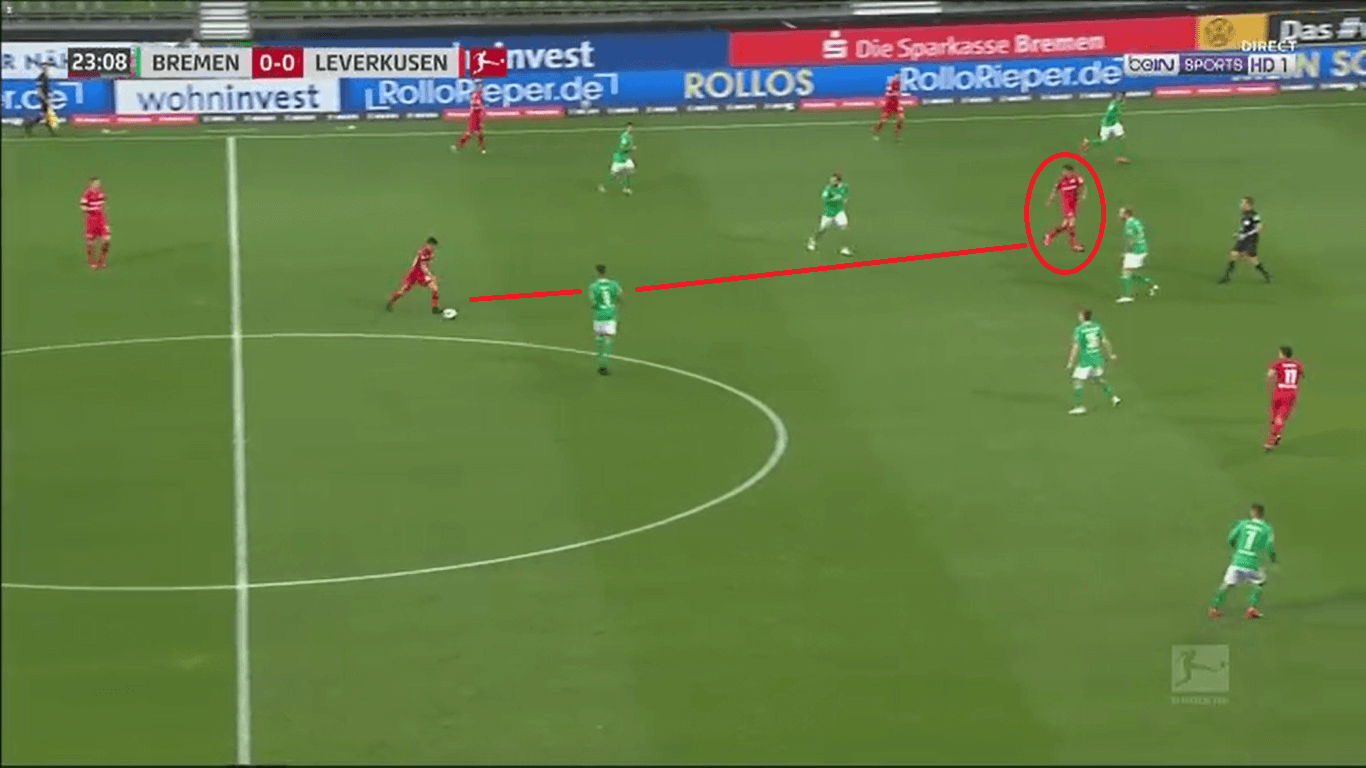 Especially against opponents who play with a single pivot, Leverkusen are able to play such passes like in the image above. This gives a lot of options to create dangerous attacks. 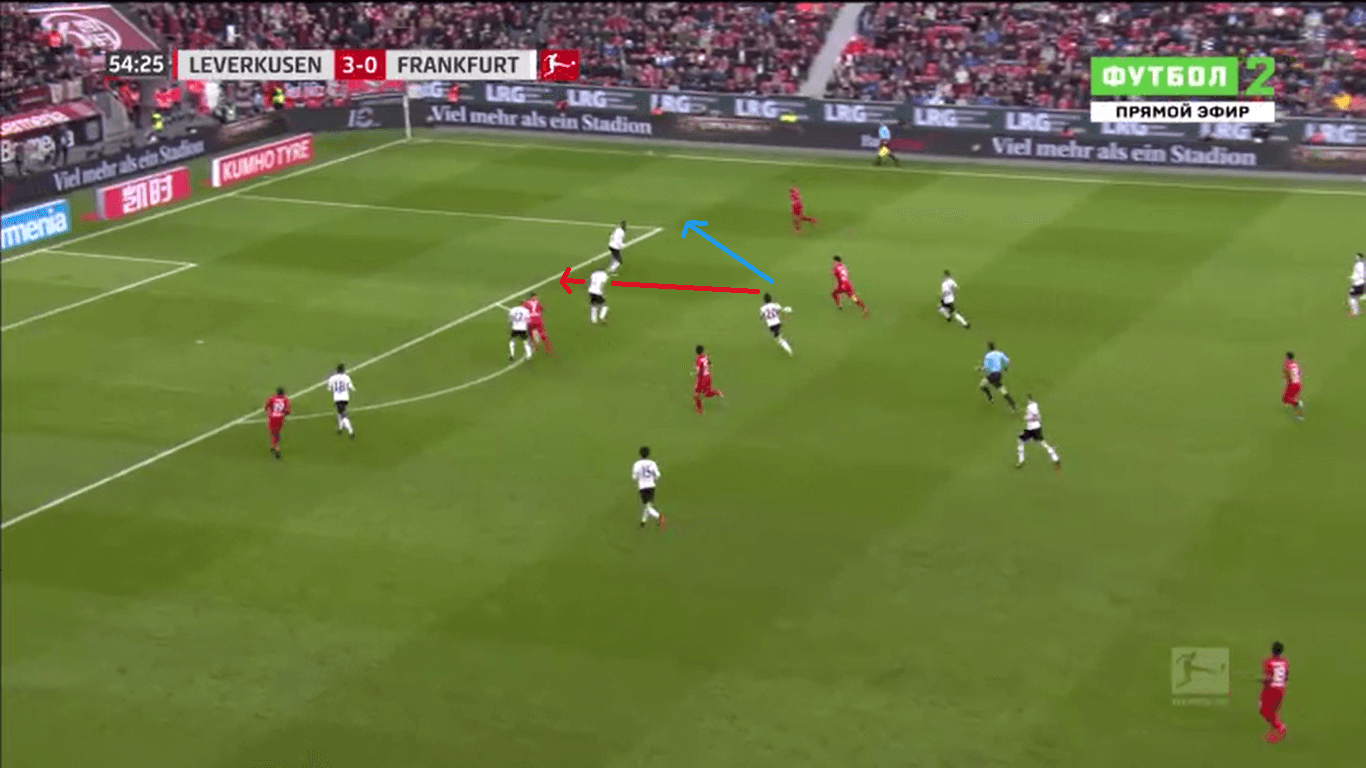 Sometimes, it can also be observed that Leverkusen play a through ball to a winger or wingback. 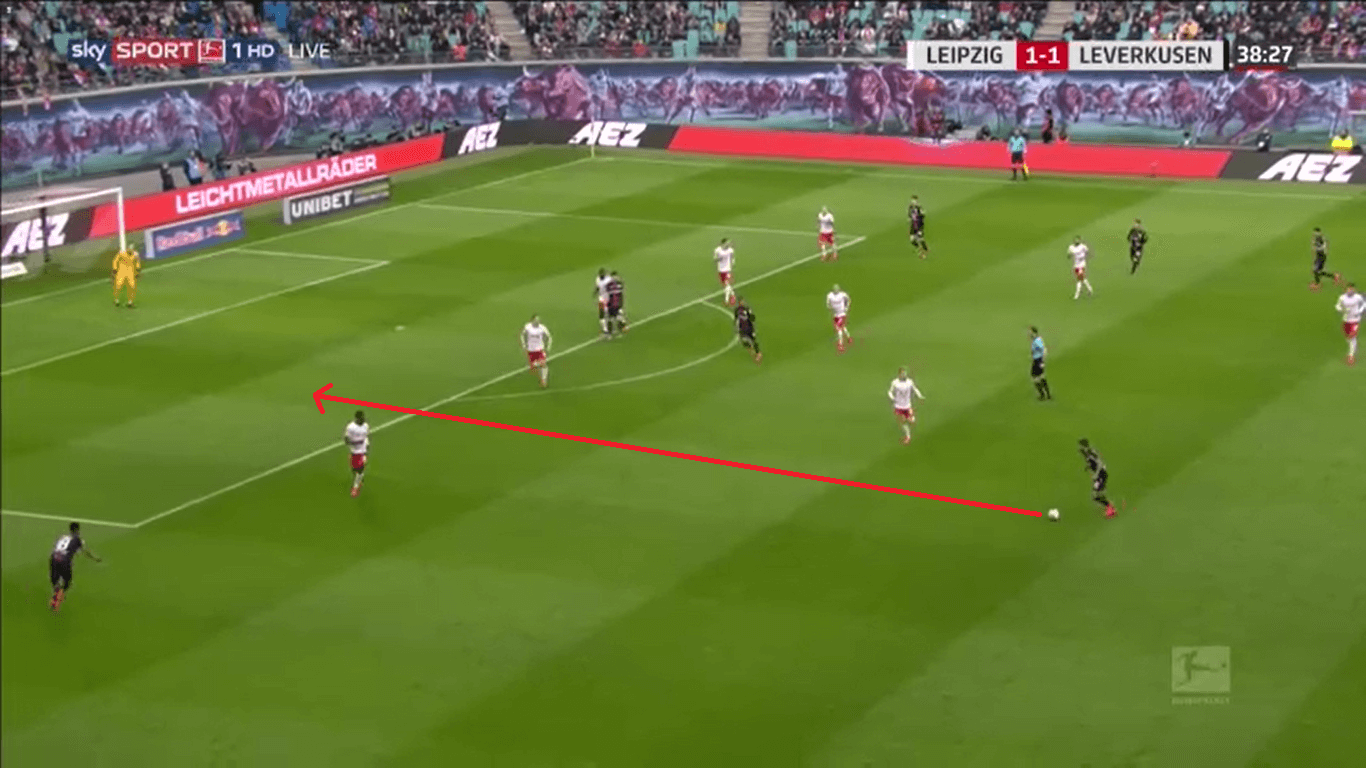 With such a huge variety of possibilities, Leverkusen are difficult to defend against. This side has a lot of different attacking tactics and can find solutions against almost every defence.

In our tactical analysis, we have seen how Peter Bosz shaped Leverkusen’s offensive structure. Even though he lost his most creative player with Julian Brandt, who moved to Borussia Dortmund, Bosz was able to find new ways to further improve his team. Leverkusen are able to adjust their possession game to the need of the situation and find the required solution for almost every problem. Given that he has a rather young squad, it will be interesting to further observe this team’s development in the future.