Golden oldies with something to offer – data analysis

In the current economic climate, clubs are struggling on multiple fronts. Empty stadiums mean no tickets sales, resulting in cash-flow being at an all-time low. No longer can clubs look to the summer window armed with a treasure chest promised by the board – frugality has moved to the fore.

For some clubs, the struggle of keeping afloat is compounded by the fear of relegation. Now the Premier League has committed to being completed, teams are desperately testing players to gain an understanding of who will be ready to lead the relegation survival charge. No money, empty stadiums, and incomplete line-ups will inevitably lead to one thing: cost-cutting.

This data analysis isolates data fit to a specification which will readily assist teams in finding good players at low costs.

The data in this analysis has been cleansed to show the following:

This criterion has been created in order to assist mid/low-level Premier League teams who will be certainly looking for a bargain to improve their squad next year. Despite there being low potential re-sell value, these players offer great initial value, which is perfect for the current situation. Even a club the size of Man United have proved with Odion Ighalo that there are aged players in less developed leagues that can still perform in the Premier League at little entry cost.

Using wyscout to scour the leagues, the following players were returned. The visual below is a Ternary triangle which measures the filtered players on three key metrics that accurately depict a player’s attacking ability. As you can see these are Expected Goals per 90 (xG90), Expected Assists per 90 (xA90), and Dribbling success.

The markers of each player are measured on barycentric coordinates, which essentially means all metrics work in relationship with each other. This means that where a player is closer to one corner of the triangle – xG90 for example – they are not achieving a higher xG90 than players further away, instead, their playing-style is more focused/weighted around scoring goals.

Putting it succinctly, a player’s position in the triangle shows the balance of their playing style in comparison to the other metrics. The players in the centre of the triangle are not worse players, just more well-rounded in their game. 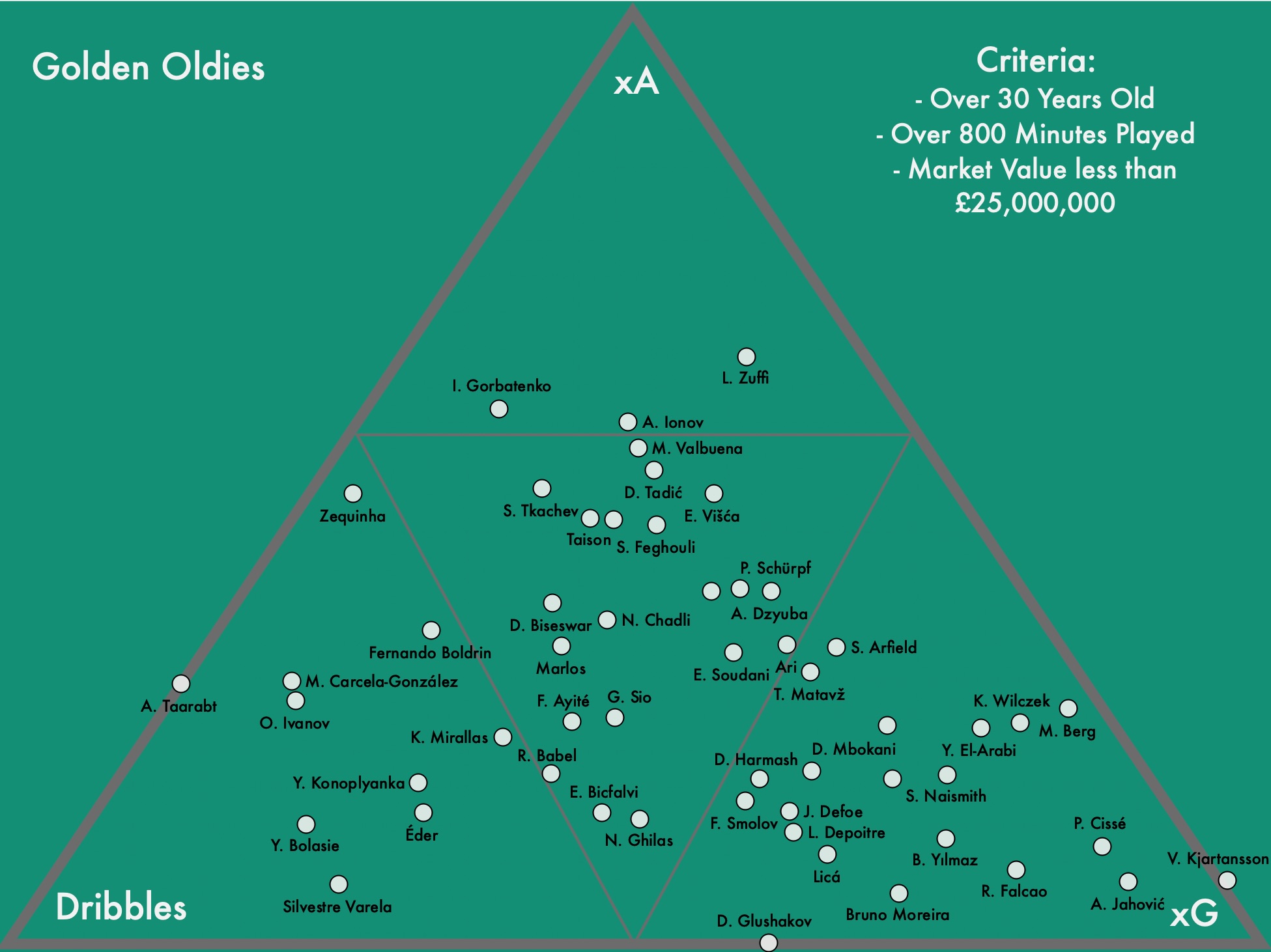 So let’s look at the results. As we can see some interesting names fill the triangle. Towards the xG end, players such as Rademel Falcao, aged 34, is still a goal-focused striker for Galatasary. The experienced Colombian achieves 0.76 xG90, showing little interest in creating for his teammates achieving an xA90 of just 0.06.

Jermain Defoe, now of Rangers, is another household name who fits the criteria. The ex-Tottenham man appears to be more balanced than some of his peers, achieving an xg90 of 0.66, an xA90 of 0.11, and making 4.42 dribbles per game.

A final observation of this graph looks at Yannick Bolasie, Sporting CP. True to form, the ex-Everton man still focuses his playing style around taking players on, attempting 5.86 dribbles per 90, and achieving an xG90 of 0.17 and an XA90 of 0.07. Valued at just £4,000,000 by Wyscout and still just 30 years old, there is potential for value with this player.

The more you look at the triangle the more interesting names you see appear. But to fully isolate the stand-out players we must drill into this data a little further, this has been done below.

This section is for clubs who are looking to find a player who’s playing style is centred around 1 vs 1 duels and technical dribbling. These players are excellent in transition and also in the attacking phase when penetrating rigid defensive structures.

The graph below cross-references each player’s attempted dribbles per 90 against their dribbling success rate. The size of the marker indicates each player’s current market value. 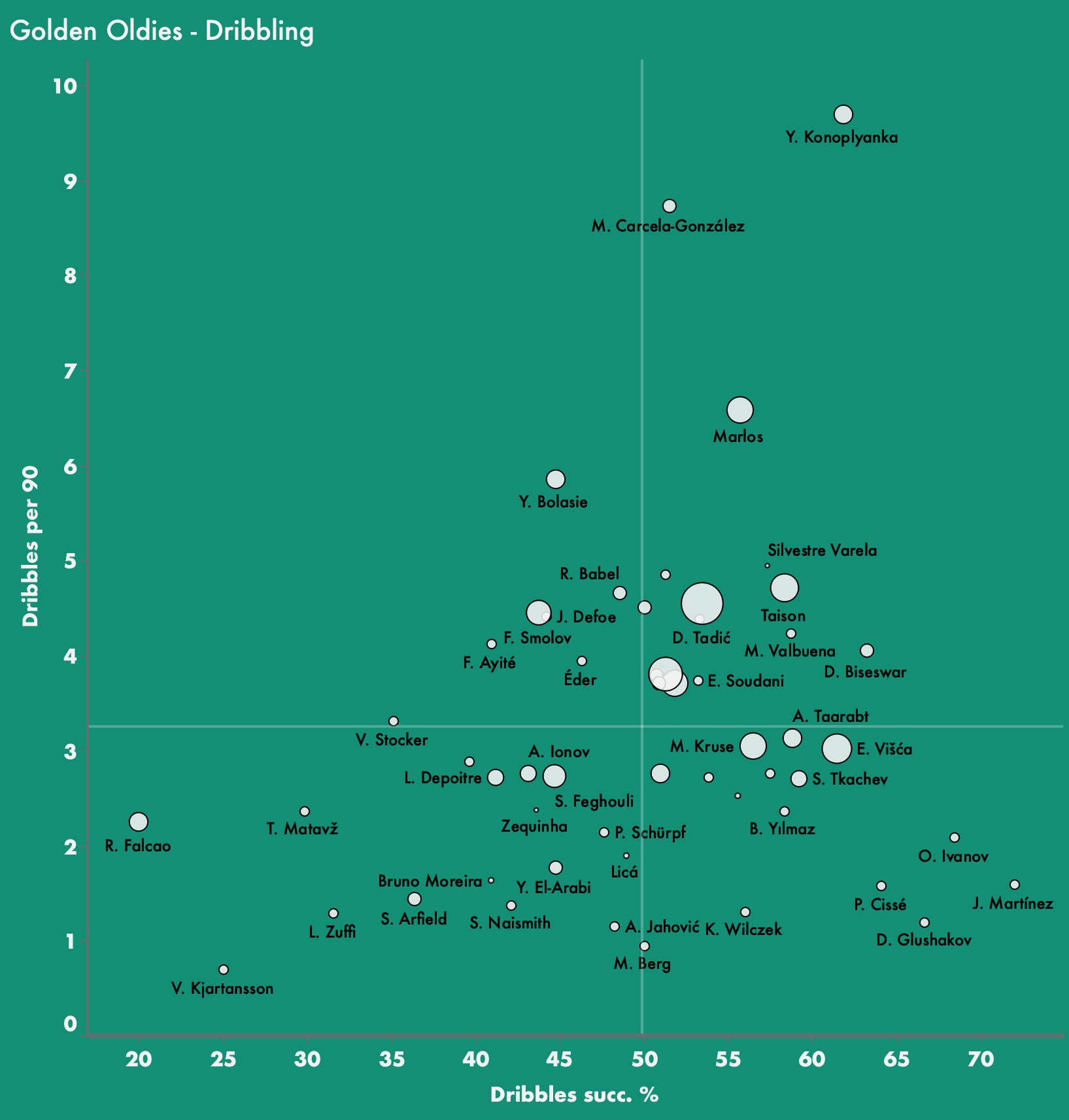 As we can see, there are a couple of standouts. Yevhen Konoplyanka, aged 30, plays for Shakhtar Donetsk in the Ukrainian Premier League. Valued at just £4,000,000, the Ukrainian attempts 9.69 dribbles per 90 – more than any other player in the dataset. His ability is supported by his success rate of 62.82%, which shows he is adept at travelling with the ball at his feet.

Mehdi Carcela-González is another player whose playing-style focuses on dribbling. The 30-year-old attacking right-winger plies his trade at Standard Liège and is a Morrocan international. Valued at just £2,000,000, the tricky winger provides 8.83 dribbles per 90 with a success rate of 51.48%.

Underperformers in this list, based on players whose game centres around dribbling (graph 1) are Eder, Bolasie, and Ryan Babel. These three are dribbling focussed but all attempt over the average amount of dribbles (3.27 per 90) but below the average success rate (49.87%). This means these players will likely lose possession more often than create chances for a prospective club and any transfer should be with caution.

This section is for clubs who are looking to find players adept at creating chances for others. These players are imperative in any side as their passing range, vision, and ability to operate in tight spaces allows them to create goal-scoring opportunities frequently.

The graph below cross-references each player’s xA90 with their average of second assists per 90. Using these two metrics gives an insight into how skilful each player is at creating for others. The size represents the current market value as before. 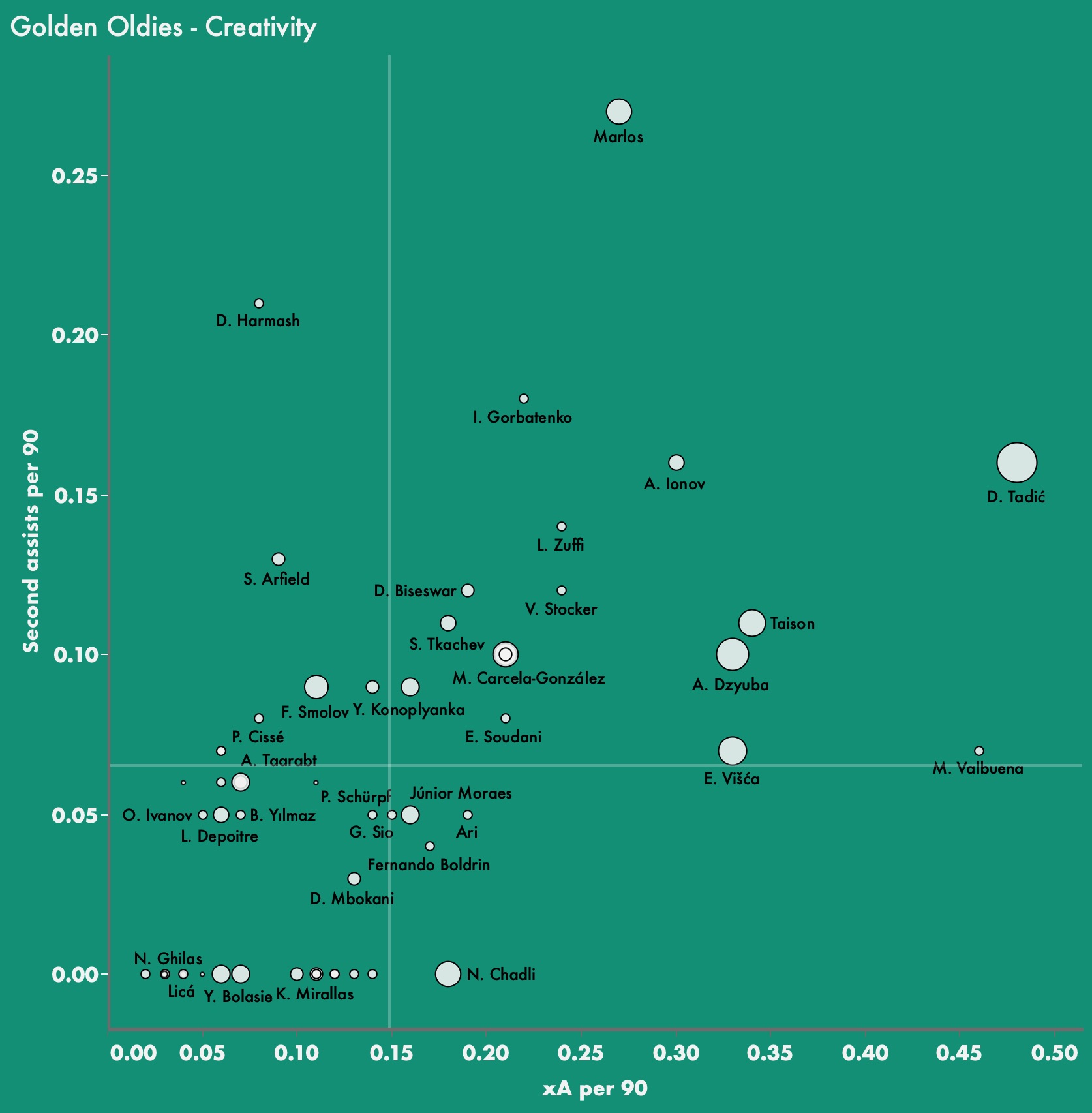 Dušan Tadić is the leader, averaging an xA90 of 0.48. The Serbian International and Ajax captain is the most expensive player on the list, valued at £20,000,000 for good reason. If we refer to the first graph Tadić is in the centre of the triangle, indicating his game is well-rounded and multi-faceted, which the figures support. The 31-year-old can comfortably play a range of positions across the front line, including centre-forward, where he averaged 0.45 xG90. The Serbian is also above average on the ball, averaging 4.55 dribbles per 90, with a success rate of 53.45%. Despite his age, Tadić represents good value for money based on his statistics and could play at a mid/high level in the Premier League.

Mathieu Valbuena is a potential red herring on this graph. Despite being valued at just £1,000,000, the Frenchman posts impressive averages. This season for Olympiacos, the 35-year-old achieves an xA90 of 0.46 and 0.07 secondary assists per 90. However, at 35, it is unlikely the player will be able to perform in an ultra-competitive league and may struggle to adapt at a higher level. On top of this, it’s likely Valbuena only has one/two more seasons left, meaning the return on investment is low.

Marlos is another Shaktar Donestk player who impresses in the creativity attributes. The 31-year-old is valued at £8,000,000 which is justified based on his figures. The Brazillian-born averages 0.27 xA90 and 0.27 secondary assists per 90, highlighting his ability in the build-up stages. The attacker is more well-rounded than most, demonstrating an eye for goal (0.43 xG90) and technical ability, attempting 6.59 dribbles per 90 with a 55.67% success rate.

This section is for clubs looking for a cheap goalscorer, whether as a starting player or an impact substitute who is reliable in front of goal.

The graph below cross-references each player’s xg90 against their goal conversion percentage. These metrics have been used to find the most accurate and prolific attackers in the dataset. 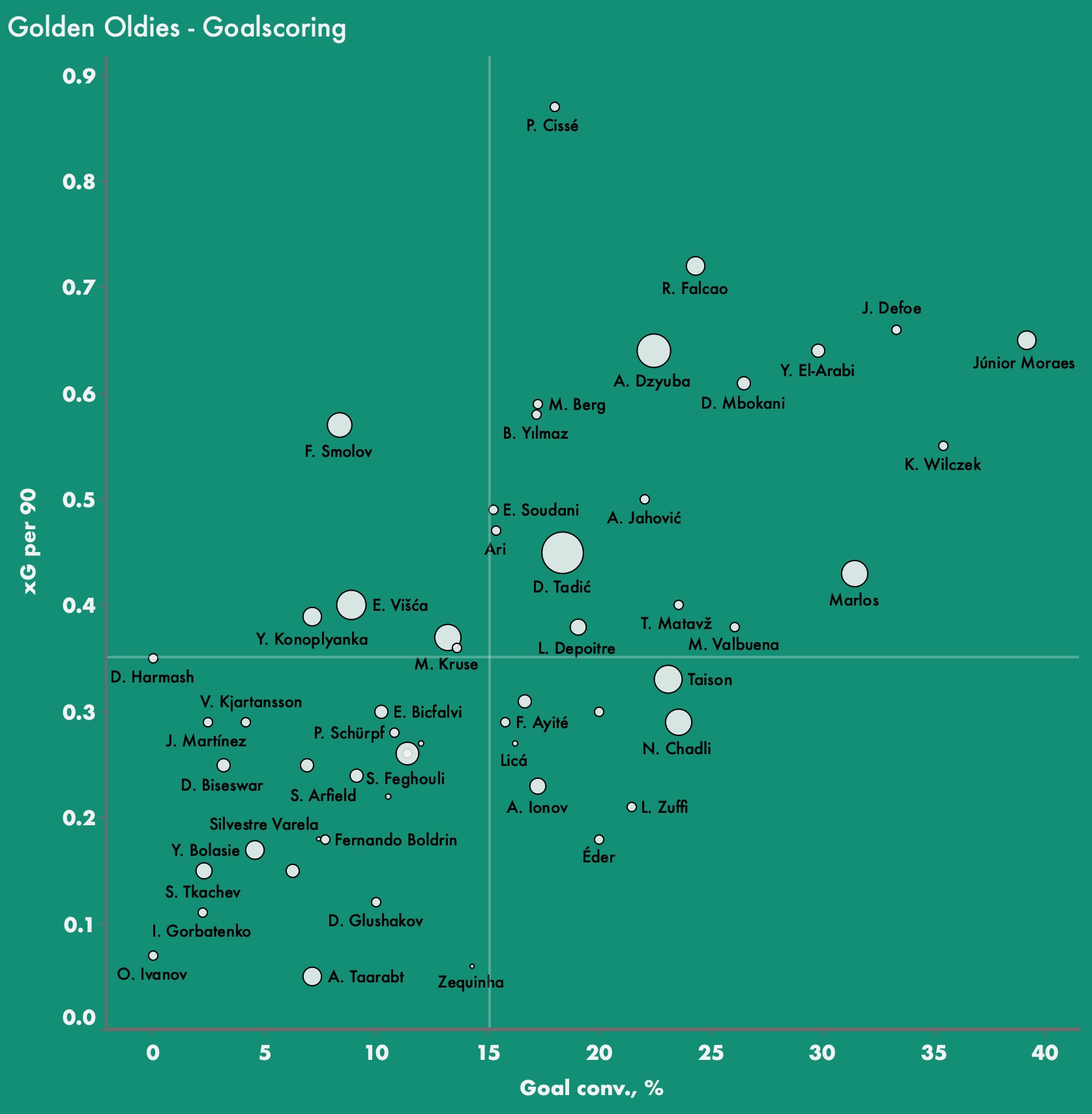 Papiss Cissé, aged 34, is still posting impressive goal-scoring numbers. The Senalgelse national is averaging 0.87 xG90 with a conversion rate of 17.98%. Playing at Alanyaspor, the striker represents good value (£1,000,000) for a low-level Premier League team who needs a goal-focused striker that can put the ball in the net when asked. We can see from the first graph that Cissé’s playing style is centred around goal-scoring and isn’t heavily involved in build-up play or chance creation.

Júnior Moraes is another player who stands out. The Brazillian is converting more than any other player in the dataset, achieving 39.13%. The 33-year-old’s xG90 is also above average at 0.65, and with a market value of £4,000,000, he represents potential good value.

Underperformers in this graph include Viðar Örn Kjartansson, Steven Naismith, and Licá. These are all attackers whose playing style is solely focused around goalscoring yet they all fall below the average xG90 of 0.35. As a result, these players represent a transfer risk and indicate the players are not up to standard – potentially declining as they reach the twilight years in their careers.

This section is for clubs looking for a target man who will suit a style of play that involves crosses into the box and more direct passing.

The graph below cross-references each player’s average goals per 90 against their average number of headed goals per 90. Though not a fool-proof technique, measuring these two metrics will isolate the players who are better in the air, scoring the bulk of their goals from headers. 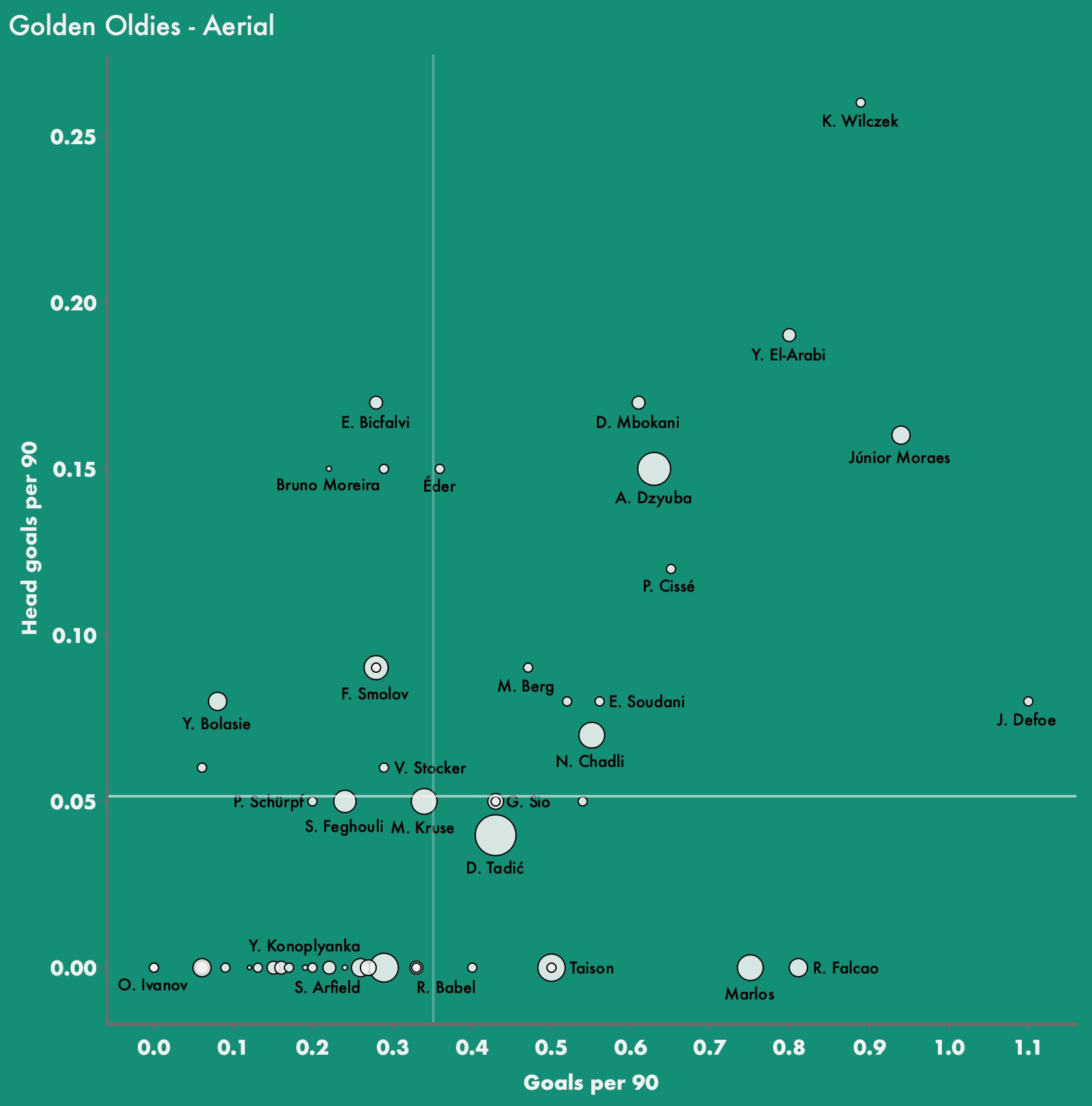 Kamil Wilczek is the standout player in this test. The 32-year-old averages an impressive 0.89 goals per 90 and averages 0.26 headed goals per 90. This means that 29.21% – nearly a third – of the Polish striker’s goals come from headers. With a goal rate of this standard and valued at just £1,000,000, the Polish striker playing for Göztepe represents potential value.

Youssef El-Arabi is a Moroccan international who plays for Olympiacos. The 33-year-old attacker averages 0.8 goals per 90 and 0.19 headed goals per 90 (23.75%). Valued at just £2,000,000 this attacker could be used for a low/mid-level Premier League team as an impact substitute in the last 20 minutes if trailing in the game.

Defoe, as expected at 1.7meters, doesn’t score many headed goals (0.08 per 90), however, the ex-England international is worth mentioning as even at 37-years-old, he is still averaging 1.1 goals per 90 minutes – more than any other attacker on the list. This natural goal-scoring ability could be the difference between survival and relegation for just £1,000,000.

Based on each test, a shortlist of players who excel in each area has been compiled below:

From this data analysis, we have identified a number of players who each possess the skills to perform a role at a Premier League club. These players, despite their age, offer great value based on the figures they are achieving in their respective leagues. We have shown that the next signing doesn’t need to be the next wonder-kid at a premium cost, it can also be a cheaper alternative with proven experience playing high-level football.