The 4-4-2 seems the most common defensive shape for teams who form a mid-block as it offers a more balanced vertical and horizontal compactness in contrast to other common formations.

Even such teams as Barcelona, Manchester City, Real Madrid and Juventus who are renowned for playing in a 4-3-3 formation, it is not uncommon to see these teams morph into a 4-4-2 when they occupy a mid-block during the opponents’ build-up phase.

For numerical balance, we will look at how a team attacking in a 4-4-2 would successfully play around or through a 4-4-2 mid-block, as this rules out an automatic numerical superiority for the attacking team. Also, by playing in a 4-4-2, in theory, we are forced to show what key movements are required across all three units to get success.

Although we examine how an attacking team can get success in a 4-4-2, the same principles that are outlined in this tactical analysis also apply to other popular formations such as the following; 4-2-3-1, 4-3-3 and 3-4-3. As with slight modifications across the midfield and up-front, the same solutions can be discovered.

Finally, this tactical analysis does not show you how to put the ball in the net. Rather, it outlines how some of the best teams in the modern game get success by playing through well trained and disciplined mid-block with these principles.

Why teams form a mid-block

There are many reasons why a team would form a mid-block; some are apparent while some are often overlooked. Depending on the teams, the quality of players and the stage of a game, there may be a tactical purpose as well as a physical purpose.

In brief, the tactical reasons could be, to nullify the threat of a technically proficient team in attack, such as teams who are capable of playing forward quickly with combination passes between the lines. Other such reasons may be to draw out defenders to spring a quick counter-attack from successful pressure or to deny technically gifted players like Kevin De Bruyne or Lionel Messi from receiving the ball and playing forward from midfield.

Another very simple and important point is that no team can sustain a high-press for 90 minutes so, to conserve energy and recover while in play, a team may do so while still being effective defensively by forming a mid-block.

The effectiveness of a mid-block

For reasons such as; vertical and horizontal compactness where there is an average of 17 metres between the three units. Also considering the defensive unit will hold an offside line approximately 20 metres from the edge of their box, this automatically makes it difficult for teams to play forward with fluidity or penetrate with long balls over the top. 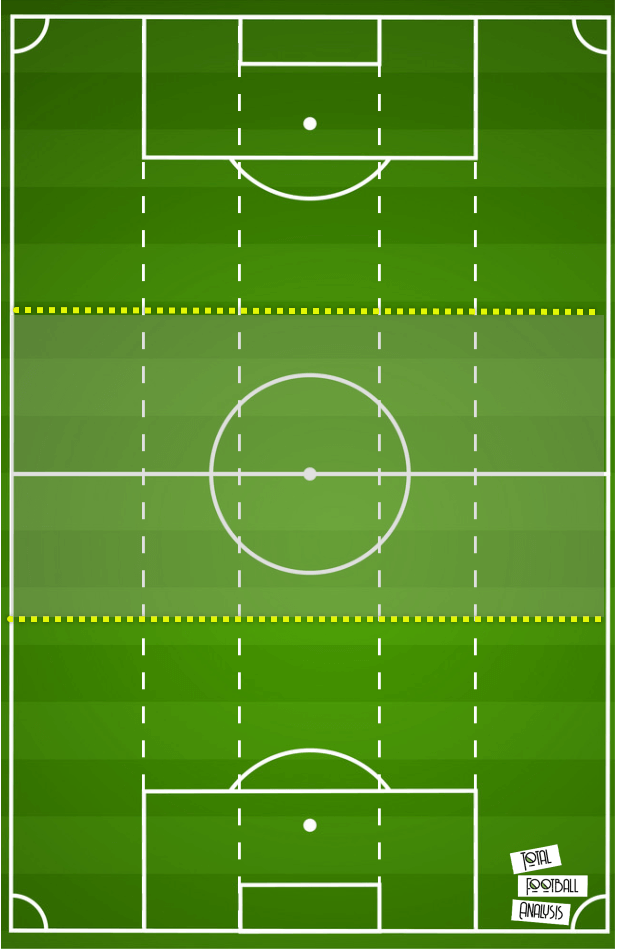 Should the mid-block be considered successful, the defensive team would be efficient in their first line of pressure to isolate an attacking defender in possession, winning possession and counter-attacking against a horizontally stretched defence caught 30+ metres from their goal. 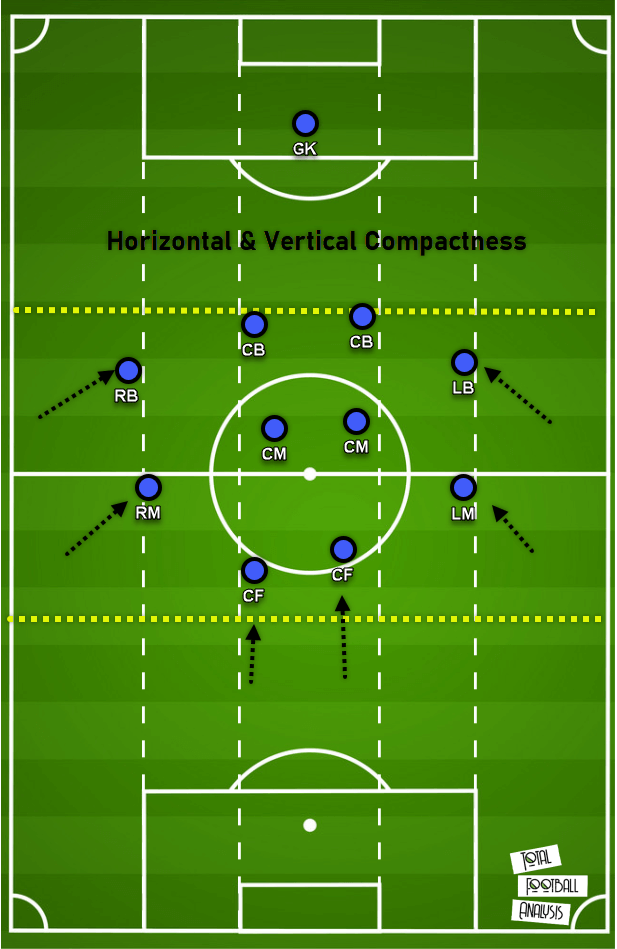 For effective vertical and horizontal compactness, we would tend to see the forwards drop just below the opponents’ final third, along with the wide players who would sit just inside the half-space channels. Should the attacking team be forced into a rushed long-ball, both centre-backs along with the goalkeeper would need to pre-empt the delivery and be ready to meet the long aerial ball arriving in front of the box.

As we will see below, the attacking team needs to maximise both width and depth along with offering good movement in the centre as well as both half-space channels to progress the ball forward through the thirds. To do this, the attacking team needs to be flexible, intelligent and willing to break away from the rigidity of their initial shape to create overloads and timely passing angles under pressure. 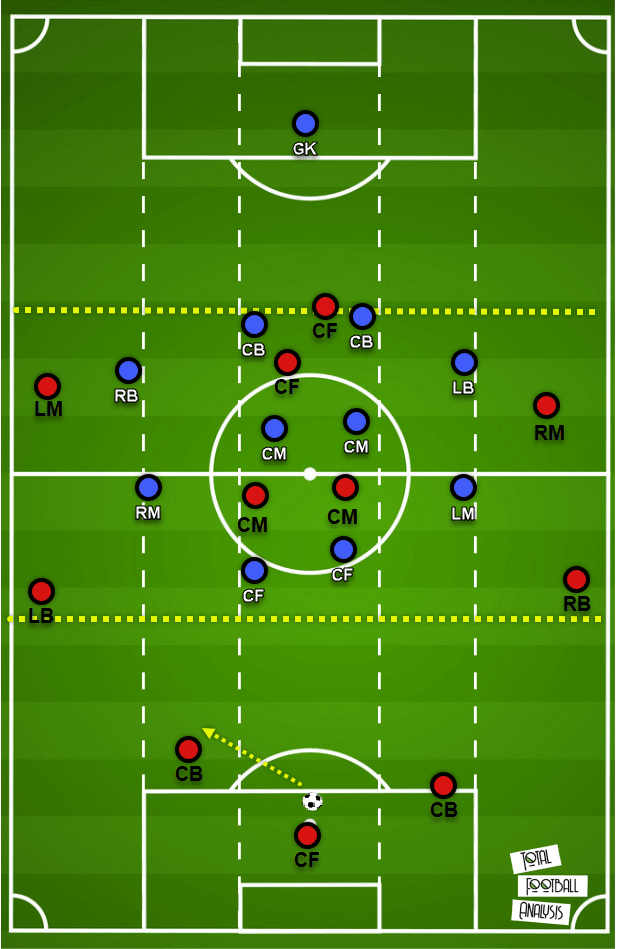 Above, we see a typical high and wide starting shape from the attacking team as they restart from the goalkeeper. At this point, the centre-backs would typically be allowed to carry the ball as far forward to the edge of the middle third before the opposition forwards engage the press. 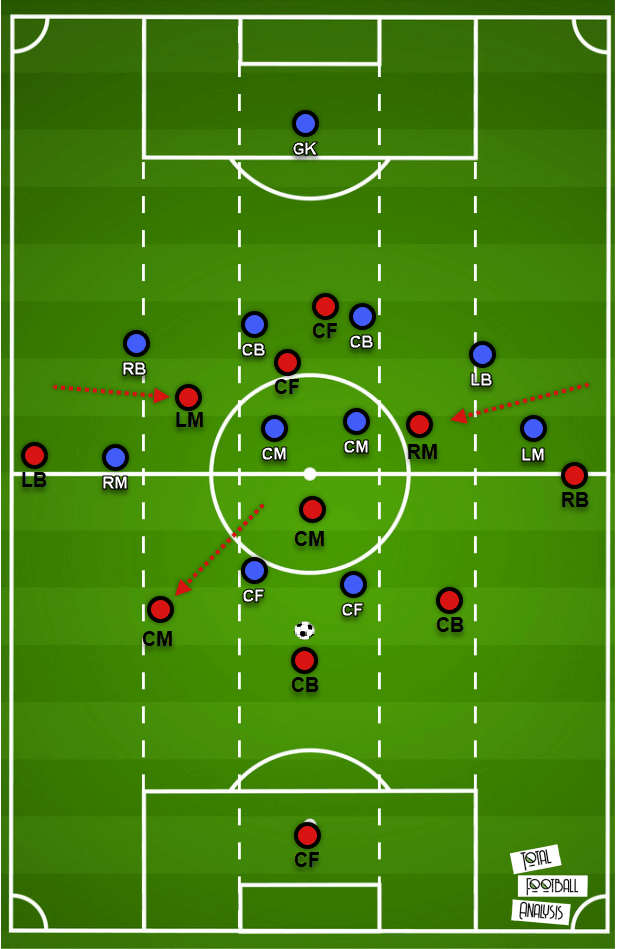 It is at this point the attacking team needs to create the overload at the back and in the half-spaces. Typically for a team that plays four at the back, the temporary ‘back-three’ is created by one of the central-midfielders dropping centrally or either side of the two centre backs while both full-backs push high and wide.

Similarly, for two players not to be occupying the same passing lane and also to create a free passing option in the half-space, the wide midfielders generally tend to move inside. Subsequently offering the full length of the wide channel to the accompanying full-back. While one of the strikers, most often the ’10’ will drop into midfield to also become a free passing option to progress the ball. Virtually making a 3-5-1-1 formation temporarily. 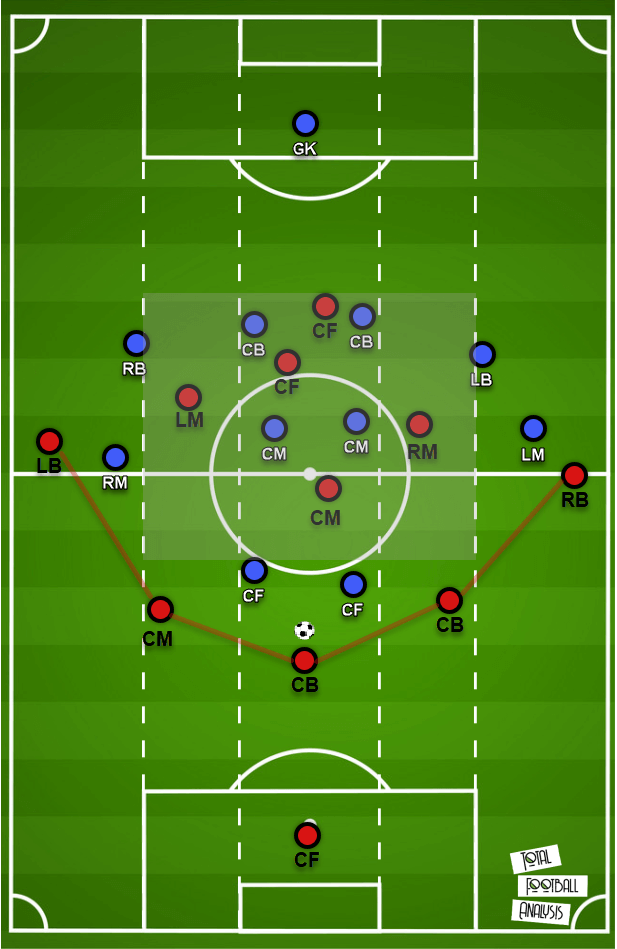 Two essential features of the attacking team’s organisation can be observed here. Firstly, the attack is anchored with safety in numbers by the back-three playing slightly deeper than the first line of pressure, while the ever-present threat of a wide attack is created by having both full-backs maximise the width. The defending team will be challenged out of their horizontal compactness if the attacking team circulates the ball well.

Meanwhile, the shaded area above which houses four attackers shows the players who have the freedom and creative capacity to make horizontal and vertical rotations to receive forward passes unmarked in pockets of space. This is only possible when there is a safety back pass option and an outlet on the wings.

Even the much-appraised Manchester City, Liverpool and Real Madrid for all the individual brilliance they keep in reserve still do not stray away from the principles of playing forward with numerical superiority starting from deep. Below is a simple visual explanation of how a team which is successful in playing through a mid-block does so without having to engage in 1-vs-1’s. 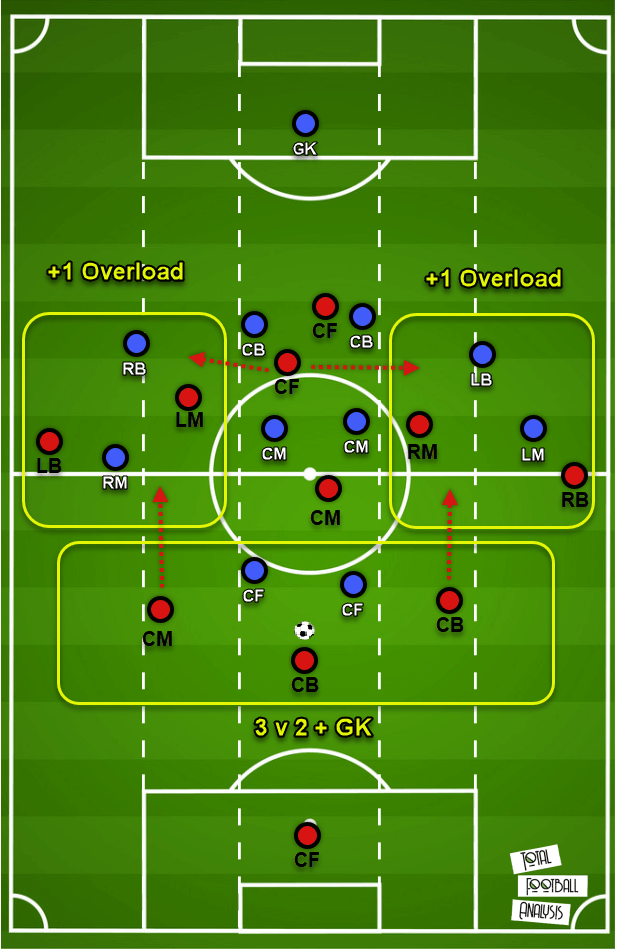 Starting from deep, both centre-backs are accompanied by one centre-midfielder to successfully evade the press of the opposition forwards, ultimately to find either space to drive forward into midfield or a passing angle to play forward.

Just in front, in either wide or half-space channel, there is an opportunity to create an overload of one or more players, depending on how compact the defending team was on that side of the field prior to the ball being played forward.

By having one of the deeper-lying defenders join in by supporting from behind and having one striker move inside as a passing option, there is ample opportunity to break into the final third. 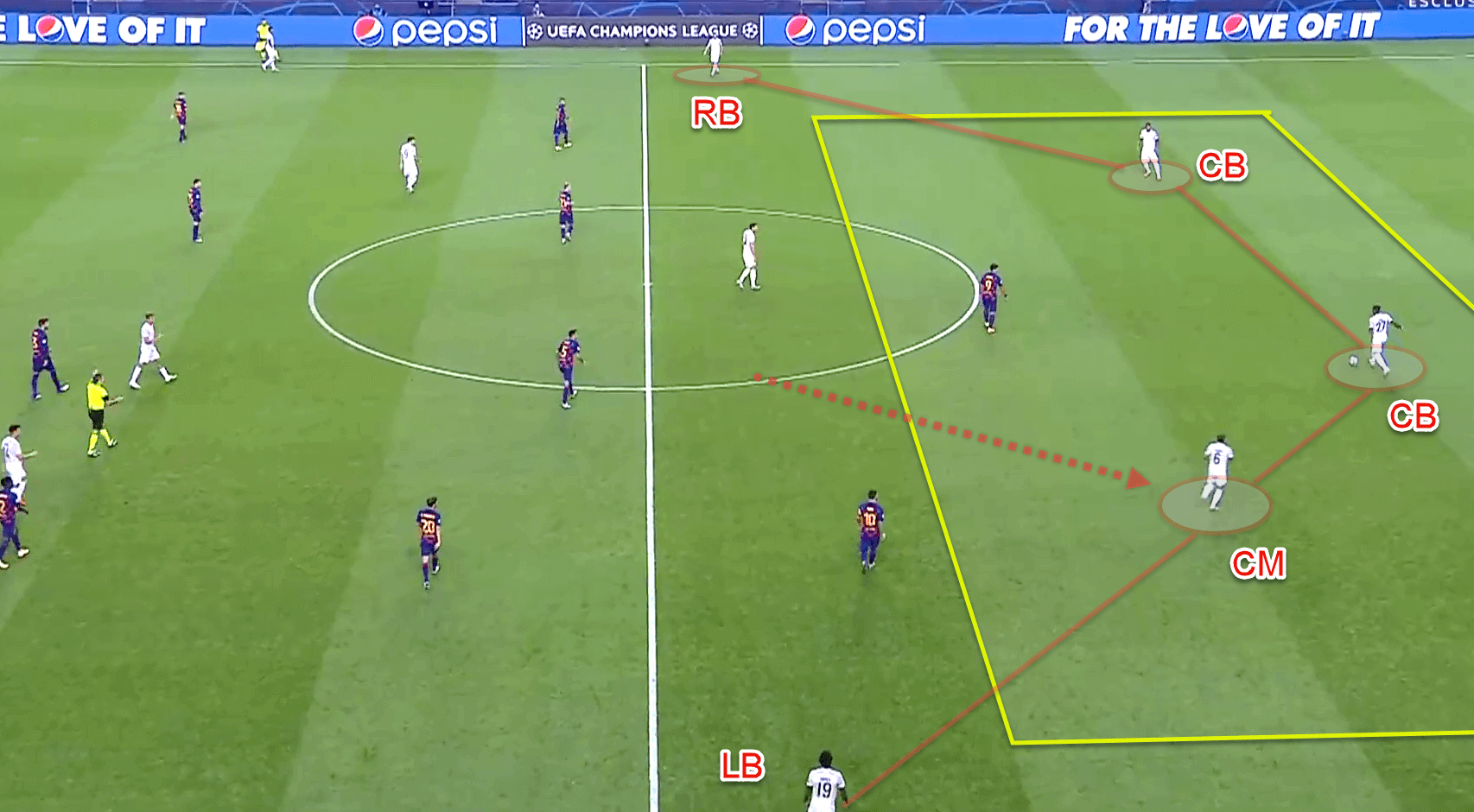 In the recent UEFA Champions League clash between Barcelona and Bayern Munich, Bayern created a temporary back-three against the front two of Lionel Messi and Luis Suarez. Central midfielder Thiago Alcantara drops to the left-half-space to receive a pass and advance the attack.

Creating and exploiting the weak side 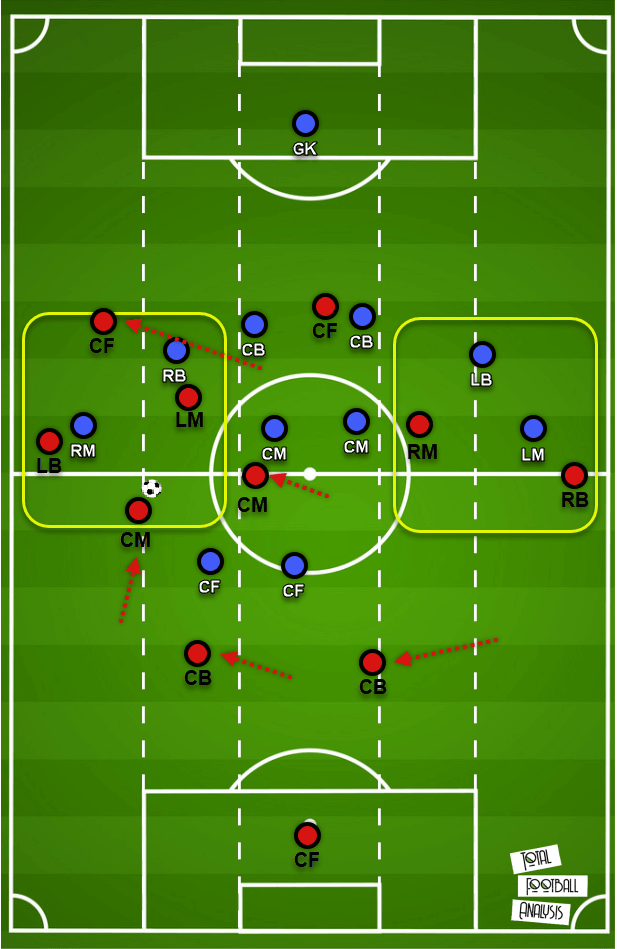 As the play progresses into the opponent’s half, we see the key movements that allow for the attack to progress. In this tactical image, we see very often from top-flight teams the vacant player at the back has space to drive forward. Both the winger and the full-back move into different channels to offer a left and right passing option. Meanwhile, one forward and one centre-midfielder can also move into a pocket of space to receive and advance the play forward. 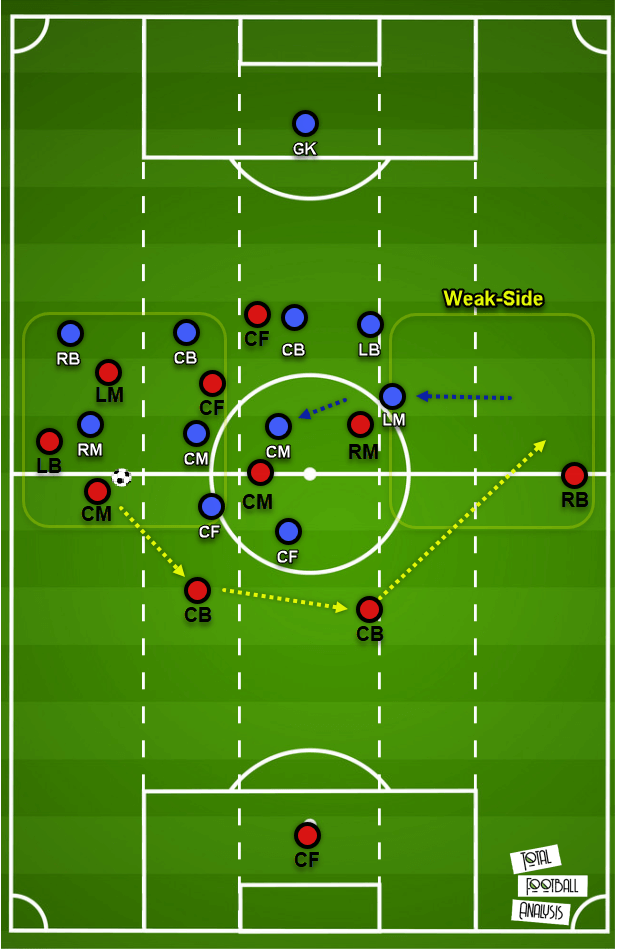 Once again a feature of the best possession-based sides in world football is their tactical acuteness and patience to create a weak side of the opponent and then find a way to exploit it with a quick transfer to the other side.

Although it is hard to show and emphasise here, the level at which the switch happens along with perfect passing qualities is essential in exploiting the weak side. If the attacking team must go deep to find a way across, this allows time for the defending team to shift across and become compact. 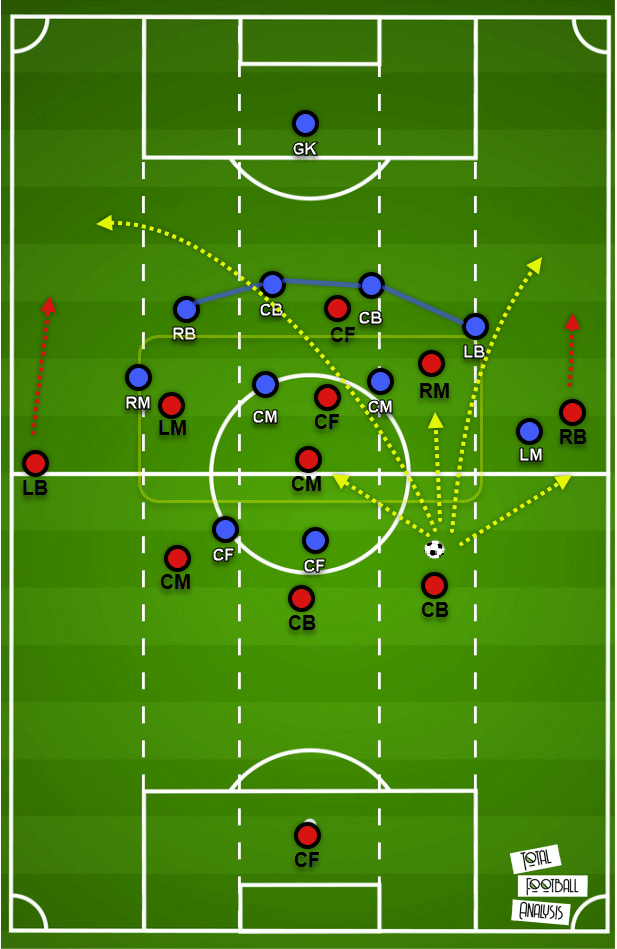 Above, we see what passing to penetration options become available by having a free player high up the field in a back-three. By having a player in the half-space then there is a sufficient angle to play a long diagonal pass to the attacking full-back on the opposite side. Similarly, if the opposition becomes stretched, then that will allow for a forward pass to become available in the same half-space. 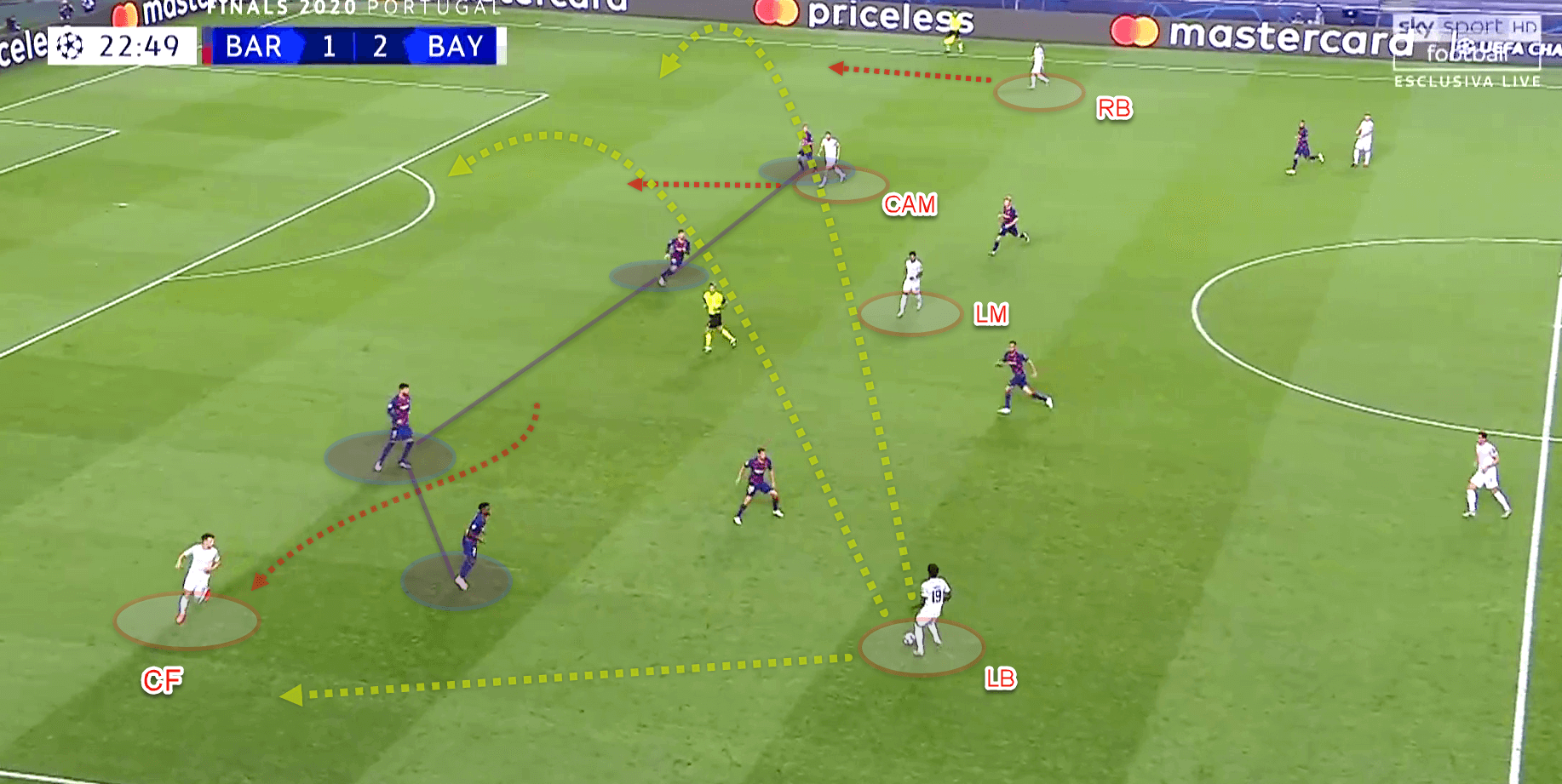 Above, we see another example in the same game between Barcelona and Bayern Munich. Left-back Alfonso Davies receives a long pass from the opposite side. Notice the movement of the Bayern forwards to dismantle the Barcelona back-four. Centre-forward Robert Lewandowski moves into the channel to offer a passing option forward. Notice the Barcelona centre-back Gerard Pique cannot follow as he will leave too big of a gap in the backline.

Meanwhile, Bayern’s full-back and wide forwards on the opposite side are making attacking runs to exploit the spaces left open by the overloaded back-four of Barcelona.

Penetrating from the half-space 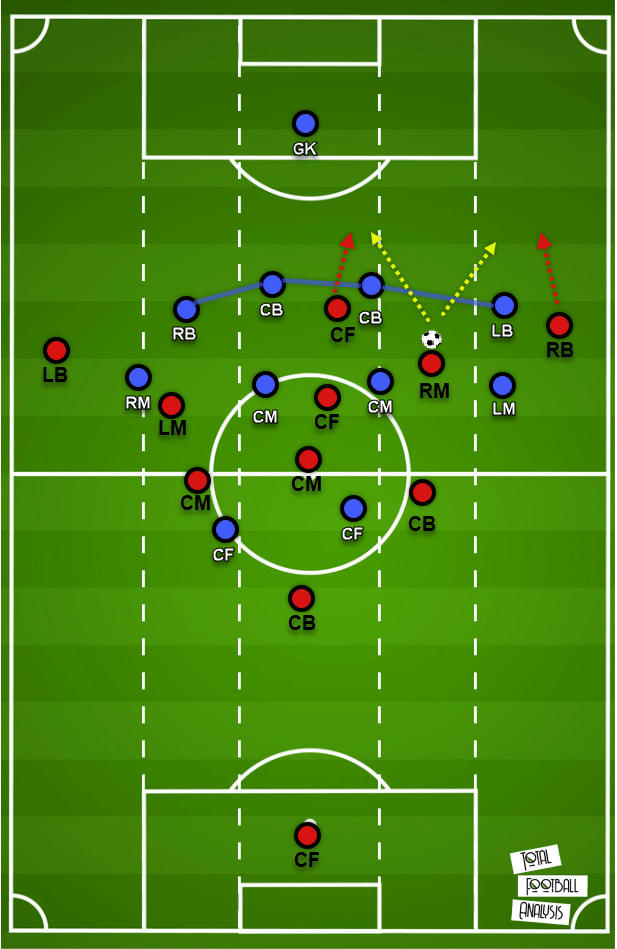 Finally, should play progress to the opponent’s final third inside the half-space, in theory, there are a lot of opportunities to create dangerous attacks as the opponent has to unbalance either its midfield or backline to press the ball carrier. More importantly, there is an angled-pass to straight-run penetration opportunity from this position as either the centre-forward or the attacking full-back can meet an angled pass in behind the opponent’s defence.

We are now seeing more teams at all levels of the game apply this strategy against a 4-4-2 mid-block as the tactical principles are both sound and hard to defend against. The success of the attacking team does also depend on other such important factors like, technical ability to receive and play under pressure, to spot openings in the opponent’s back four under pressure and at all costs never be isolated under pressure.

Check back in with us in the October edition of the Total Football Analysis Magazine as we bring you a structured coaching piece that shares and develops on the above tactical principles that you as a coach can apply to your team.