Opposition analysis and therewith the creation of a match plan became common within the
last decades. Through simple adjustments of the tactical system, a match plan allows for a
better structure to execute attacking and defending principles.

In the following tactical analysis, we are going to explain the ideas lying behind a match plan as well as how to create an opposition-specific game strategy.

Structure of a match plan

To structure a match plan, one can utilise the model of the four phases of the game. The
game can be divided into the offensive/defensive phase as well as offensive/defensive
transitions – the four phases of the game. In the following, we will provide examples of what the creation of an opposition-specific match plan can look like. Although we have separated the phases into different paragraphs, one should still bear in mind that all phases are connected and therewith influence each other.

There are different types of pressing strategies, independent of the formation. Firstly, one
can differ between pressing high up the pitch, setting up a mid-block around the halfway-line or defending within the own half with a low-block. Structure-wise, one can choose a zonal marking approach or a man-oriented way of defending. Whereas zonal marking is based on space restriction for the opposition around the ball, man-oriented defending aims at pressing man-to-man to increase the pressure on every single opposition player.

Depending on the opposition style of play and qualities in build-up, there should be a plan for which pressing strategy to use.

In addition to that, the identification of the opposition build-up structure can help to find a
fitting pressing formation. Often, teams that press high up the pitch attempt to mirror the
opposition shape which allows for man-orientations. 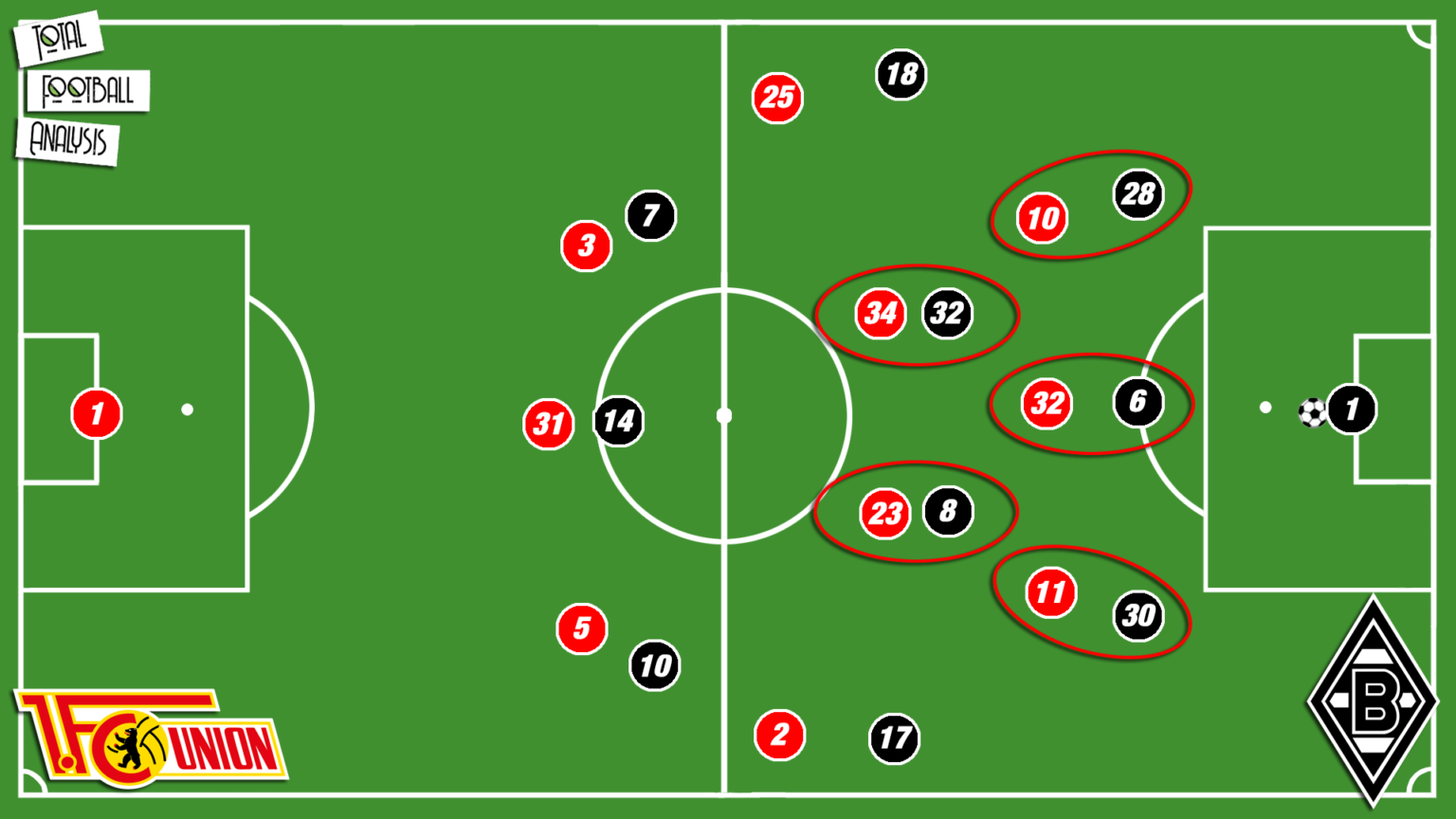 In the graphic above, one can see how Union Berlin used a 3-4-3 shape in order to press Gladbach’s 3-4-3 in a man-oriented way.

When defending deeper, many sides use a formation which ensures a numerical superiority within the back line. As an example, against a striking-duo, they would play with a back three. This prevents an isolation of the centre-backs against the opposition attackers in 1v1 situations.

In order to sustain possession and prepare for promising attacks, a well-thought-through build-up play is needed. As the opposition will attempt to disrupt this, it can be helpful to identify the key characteristics of the opposition press.

Gladbach, for instance, was able to outplay Union Berlin’s press, which we already mentioned in the last paragraph, with a 3-5-2 system during the build-up. As one can see below, Gladbach therewith created a numerical superiority in central midfield against the opposition double-pivot while the back three still occupied Union Berlin’s attacking trio. 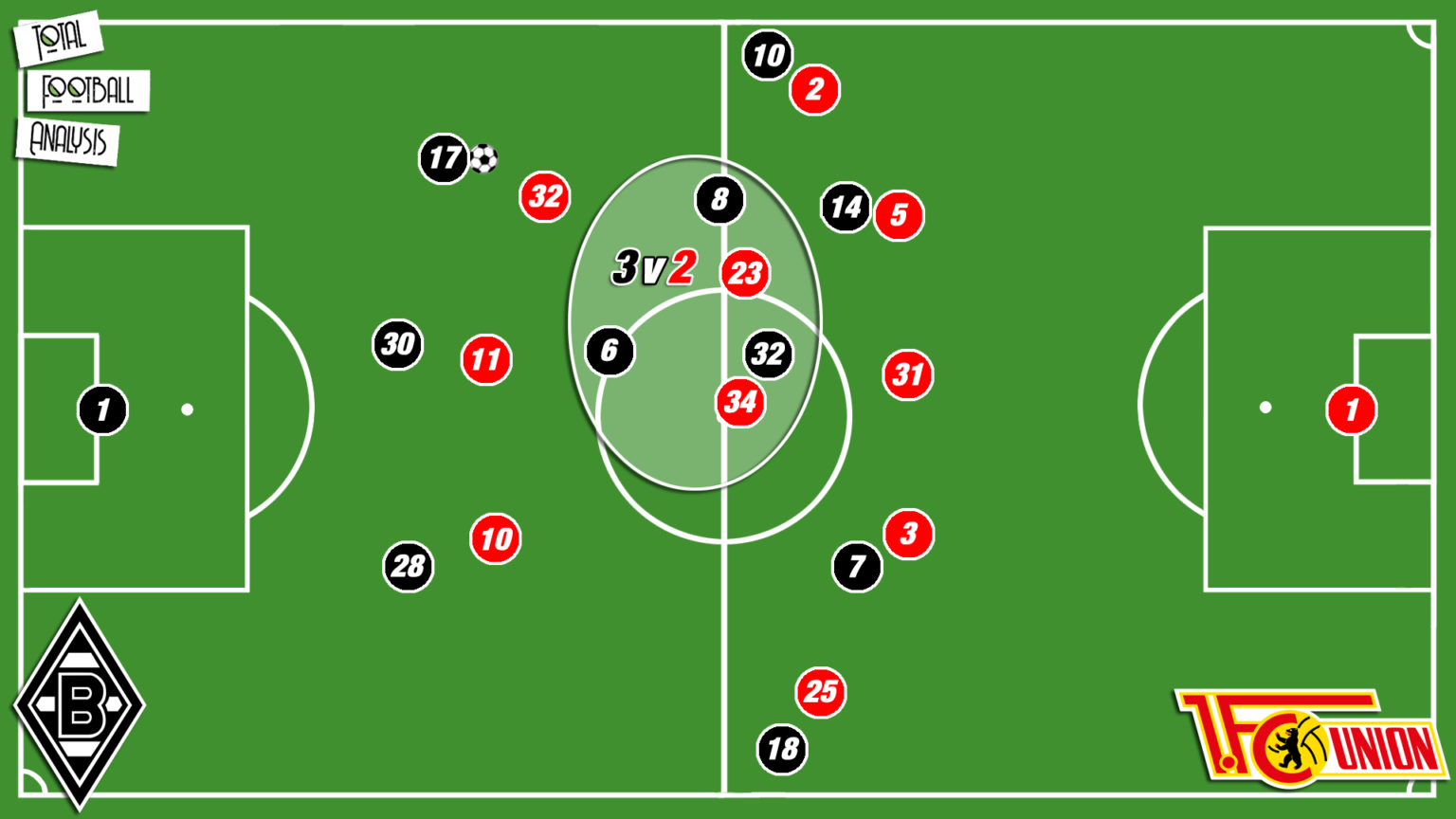 Although they took until the half-time to adjust their shape, this is a brilliant example of the impact of a tactical system on the success of playing out from the back. Furthermore, it stresses another important aspect of a match plan in professional football: One should always have a “Plan B”. Since the opposition might play with a different formation than expected, it is necessary to be prepared for a switch of formations.

Obviously, one of the key targets is to create valuable goal scoring opportunities. Therefore, it is necessary to identify opposition weaknesses in defence to increase the probability of creating chances. Whether it is a weak defender or a structural issue, either can be exploited with smart attacking play.

One common way to exploit the defensive weaknesses of an opposition full-back would be the “overload to isolate” strategy. In this case, the ball is circulated on one side of the pitch with most of the players sifting towards the ball side. Meanwhile, the ball far winger provides width on the other side. As a consequence, the opposition will shift towards the ball side leaving their far full-back to defend the winger in a 1v1. With a quick switch of play, it is possible to take advantage of this situation. In the image below, one can see Leverkusen creating an isolated 1v1 situation on their left attacking side with the help of overloading the right side. 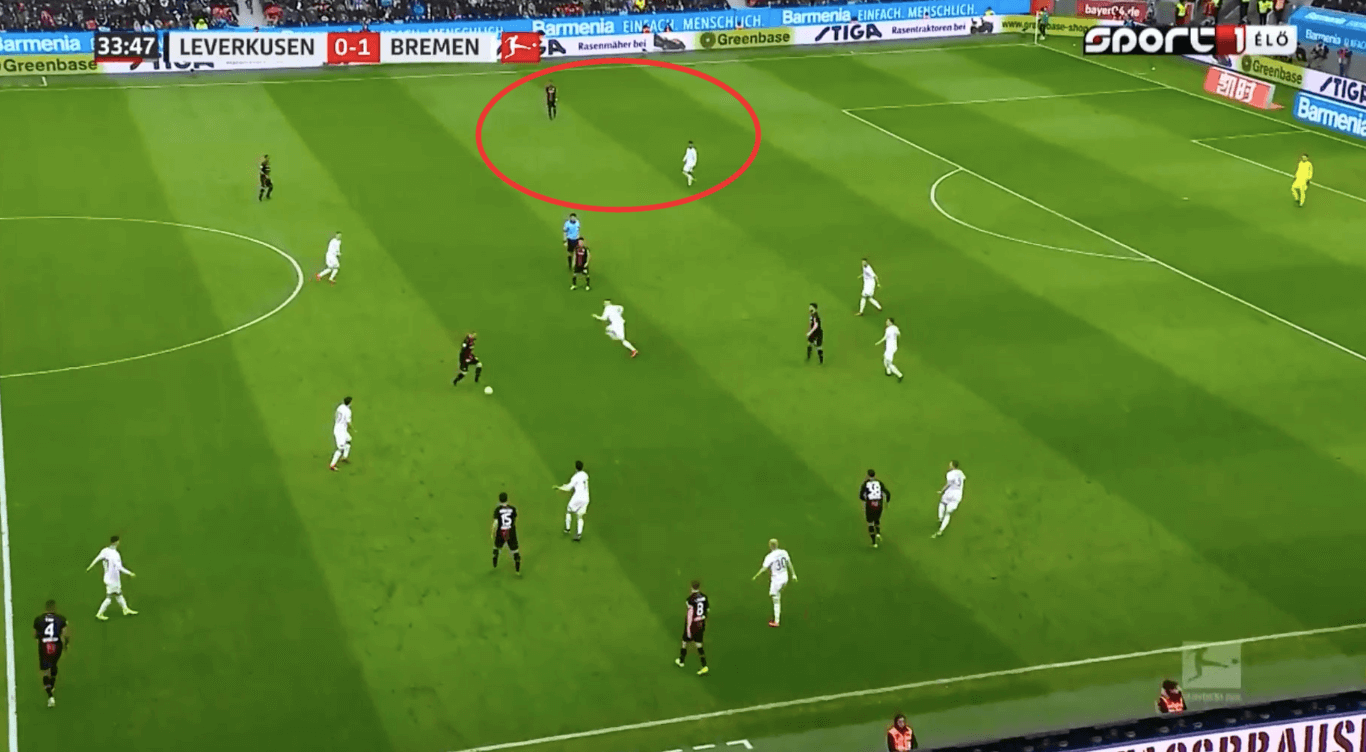 Besides the creation of such favourable situations, one can also exploit opposition structural issues. For instance, against sides with a back four and centrally focused midfielders, one can attack the vacated space on the flanks. Below, one can see Werder Bremen’s defensive formation (green) against Leverkusen’s attacking shape (red). With regard to this, it is not a big surprise that Leverkusen mainly attacked down the flanks. 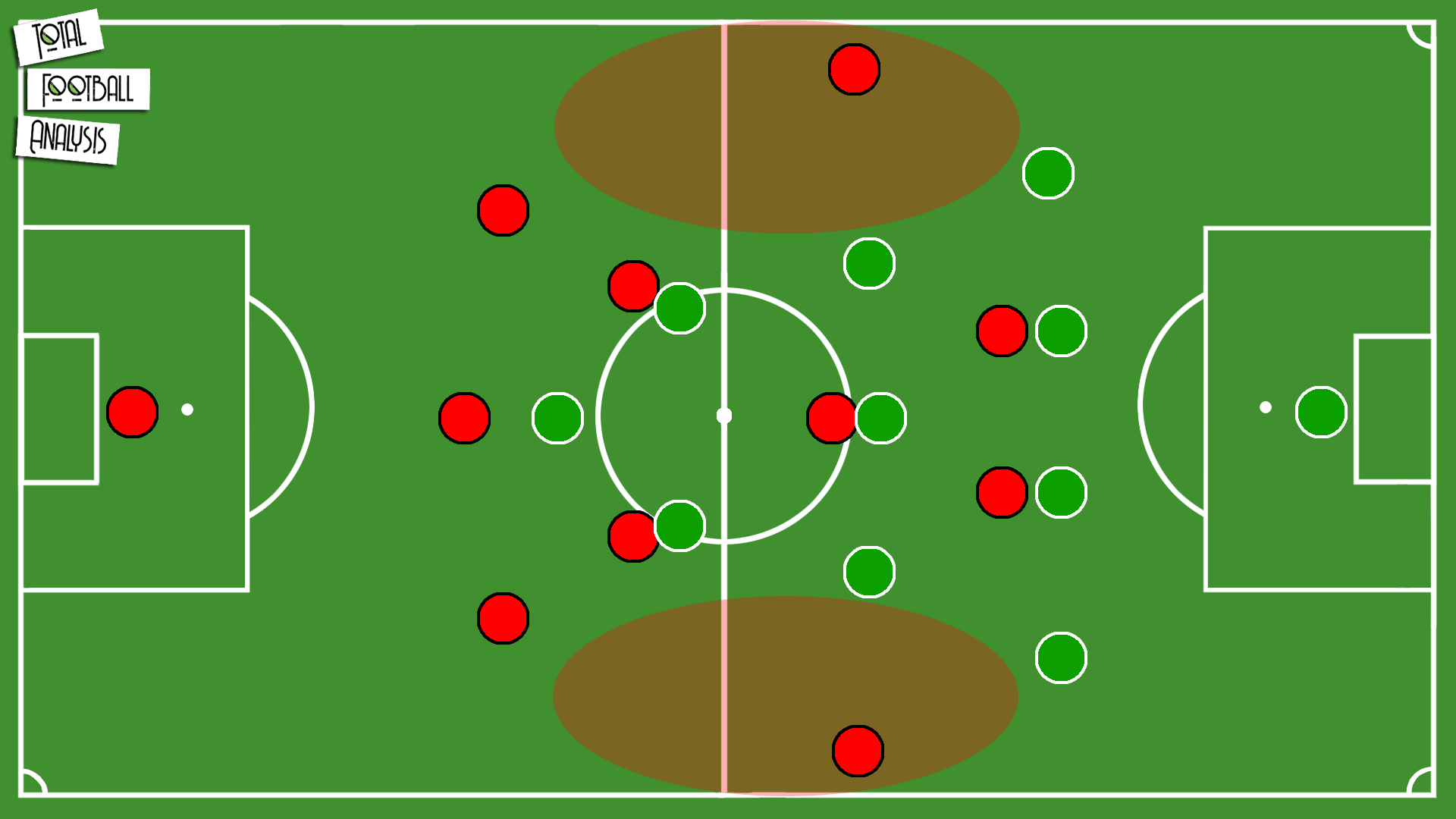 As already mentioned, the offensive transition is highly connected with the defensive phase of the game. Therefore, it is necessary to ensure that all players can stay in advantageous positions for possible counter-attacks during the defensive phase. A famous example of this, is the utilisation of a defensive 5-4-1 formation instead of a 4-5-1 shape against a side with high full-backs. Below, one can see Wolverhampton’s defensive 5-4-1 shape to defend against Manchester City (graphic created by Lee Scott). Their wide forwards do not need to track back opposition players. As a consequence, Wolverhampton are ready to counter-attack with three players. 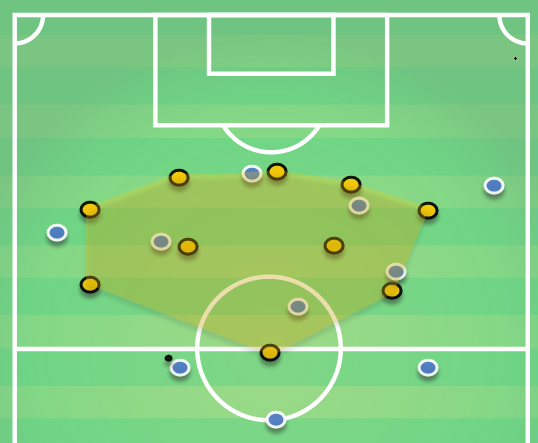 Although the 5-4-1 system might sound more defensive and therewith less threatening on the break, it can actually be very advantageous for counter-attacking. That is because both wing-backs defend the opposition full-backs, which allows the wingers to take up higher positions. This enables the wide attackers to quickly attack the space behind the opposition full-backs after regaining possession.

Paul Smith has given us an overview of the different tactical systems to defend the counter in the September edition of our magazine (2019). The image below displays Arsenal’s 3-2 shape in the back taken from Paul Smith’s article. 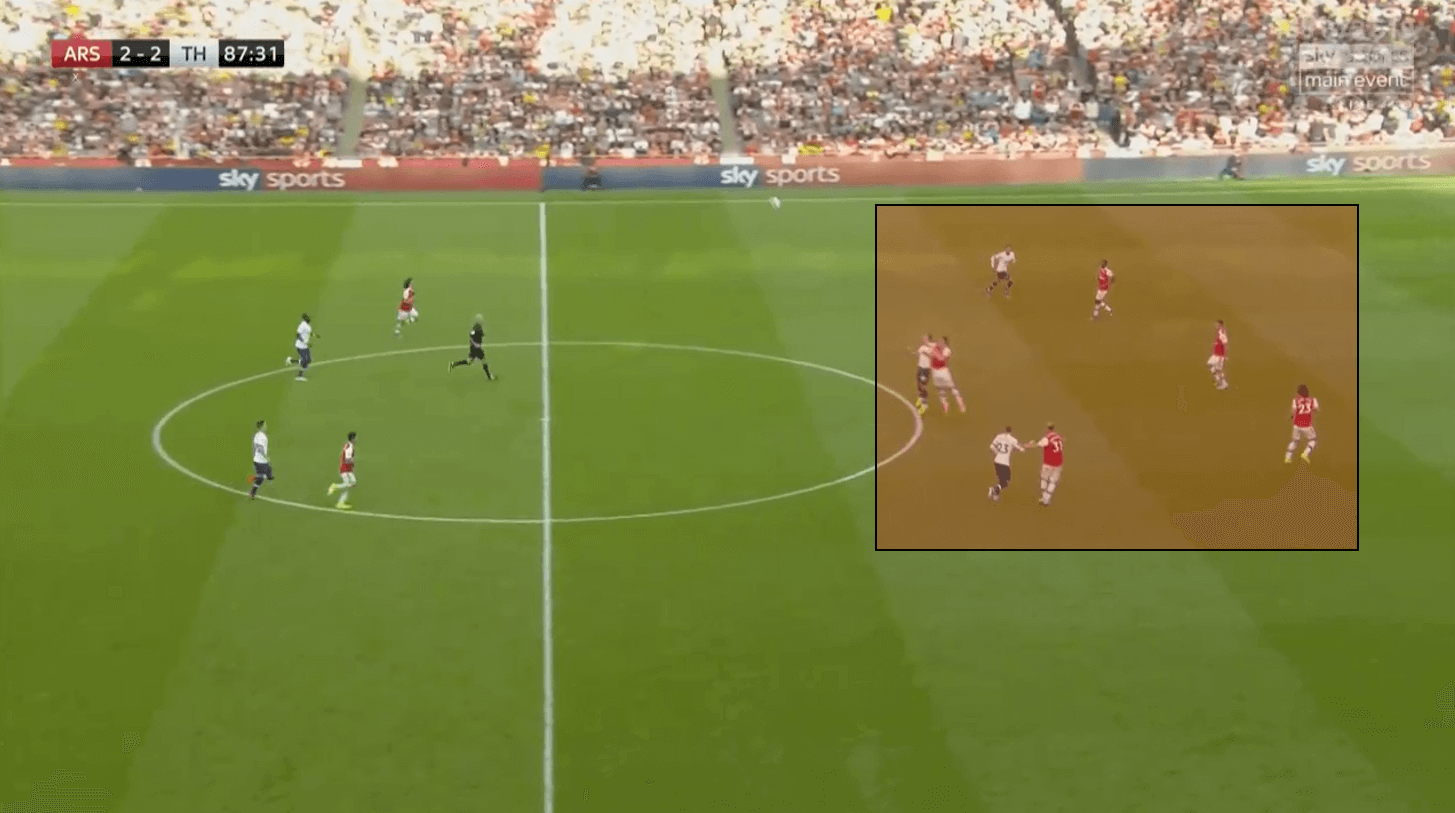 Especially when playing against an opponent with two strikers staying up the pitch during the defensive phase, the utilisation of a 3-2 shape is sensible. The three defenders can defend the opposition striking-duo in superior numbers while the midfielders can defend opposition midfielders.

In general, it should be ensured that there are more players than the opposition attackers within the back line. Moreover, the players within the rest defence should be aware of their duties and already take in positions on the “inner line” (line between direct opponent and the own goal).

Set-pieces / What to exploit and who to defend?

Different from the four phases of the game, set-piece situations always have the same starting point (e.g. corner-kicks). Both sides can organise before the ball is brought back into play. This allows either side to practice certain routines on the training ground which can be executed in-game.

Obviously, in terms of set-piece situations, the opposition analysis can go as far as observing possible free-kick and penalty-takers including their favoured corner. Every coach needs to decide whether this is necessary apart from top-flight football though. A famous example can be taken from the Europa League 2018/19. During the penalty-shootout between Eintracht Frankfurt and Chelsea, Chelsea keeper Kepa could save the penalty from Martin Hinteregger. The Austrian defender took a powerful shot aiming at the centre of the goal. Kepa anticipated this due to pre-match analysis of Hinteregger’s past penalties which were taken similarly.

The role of data and statistics

Although most parts of the match plan are usually based on qualitative analysis, especially the pro-level football comes along with the opportunity to utilise data and statistics for the identification of opposition patterns and tactics.

Tracking data (data from GPS systems that track the position of each player on the pitch) in combination with event data (e.g. passes) can support the observations made on the opposition attacking structure. For instance, an average positioning & passing network, such as the one below, shows us which full-back is positioned higher up the pitch during the attacking phase. That enables us to identify where to line up our fast winger for counter-attacks as an example.

Above, one can see the average positioning & passing network of Bayer Leverkusen in their game against RB Leipzig. As one can clearly see, Leverkusen’s right-back (#23) is usually positioned higher up the pitch. That could pose an opportunity to counter-attack through this side. 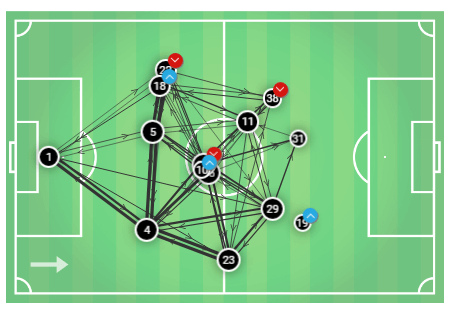 However, it has to be mentioned that data cannot replace qualitative analysis through observation. On the one hand, statistics are highly objective. On the other hand, football data never depict all factors of certain match situations. As a consequence, a well-balanced mixture of tactical observations and data analytics is required to ensure a good foundation for the creation of a match plan.

To sum up, a detailed analysis of the opposition behaviour during all phases of the game is needed to create a high-quality match plan. If existent, data and statistics can support the findings or help to identify other characteristics of the opposition.

Moreover, as explained in our analysis on how to create a match plan, set-piece situations play a vital role in the creation of a match plan since they offer more planned scenarios than open play situations.

However, as match plans have a huge focus on results, one should not lay too much emphasis on a game plan in youth football and rather focus on their own playing philosophy.