Belarus became the unlikely focus of the footballing world when it was suddenly the only league continuing to operate after COVID-19 really began to hit the continent. Clubs began to suddenly have English fan accounts, with many football fans looking for a side to follow while many European leagues such as the EPL, La Liga and Serie A shutdown. One of those sides, Isloch Minsk Raion, became a hit with fans due to their accordion player supporting the side with his music from the stands.

On the pitch, there have been some standout young players in the Belarus Premier League. One of these players was a young Nigerian left-back by the name of Godfrey Bitok Stephen. The tall 19-year-old has impressed many with his performances for the Wolves this season as a marauding left-wing back. Standing at 183cm, comfortable on the ball and possessing plenty of confidence, Stephen looks a really exciting prospect that may well have gone under the radar were it not for the sudden loss of major European football.

This tactical analysis will look at the Nigerian under 20’s ability going forward and on the defensive end. This analysis will focus on how well Stephen fits into the interesting tactics deployed by a young but nonetheless experienced head coach in Vitaly Zukovsky. By all accounts, Stephen’s performances this season make him one to watch for the future.

The modern fullback – getting forward

Zukovsky loves to use wing-backs. He encourages his left and right-sided defenders to play wide and get forward at all opportunities. With a narrow front three, it is down to these players to provide the width. Stephen is, therefore, a key player for the tactical set up of the young coach, as he is one of the best players at getting forward. We just have to look at the below heat map to see this. 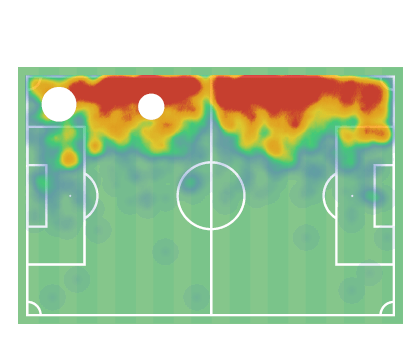 When we look at the league wide data, we see that he leads the rest in progressive runs per 90 with 4.15. While this number is impressive, it is the average progression that really surprises at 144.16 metres. Therefore, Stephen is not only getting forward often, but he is also driving the team on and progressing the ball. Zukovsky can constantly be heard encouraging Stephen to get forward when he has the ball. Most teams would progress the ball through a central midfielder, yet Isloch look to their young Nigerian star to transition the ball from defensive areas to attack. 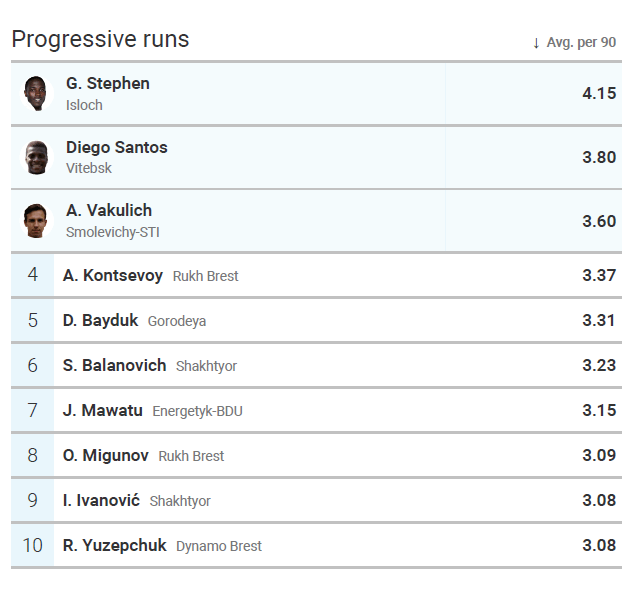 When we look at the below dribbles graphic, we see how Stephen is more than happy to dribble in his own half of the pitch. Confidence oozes out of the wing-back, as he is not phased by being under pressure and trusts this ability on the ball. Occasionally this can harm the side when he loses the ball, yet his speed and strength allow him to recover quickly.

Looking at the opponents faced, we see that he is keeping the ball against every player he faces more often than he loses it. Any winger would be happy with keeping possession 66% of the time against an opposition full-back, so for a left-back to have those numbers is very impressive.

What is also interesting of the above graphic is the high concentration of dribbles Stephen completes in and around the opposition penalty area. Zukovsky wants Stephen in these positions as he knows he can be effective there which helps create attacking opportunities for the rest of the team. Stephen has all the tools required of a modern full-back to contribute on the attacking end and he has certainly been effective in this for Isloch. What we now need to analyse is what he is doing after these dribbles in terms of his decision making.

We have already mentioned how occasionally Stephen will get himself into trouble by attempting to dribble in difficult situations. This will be something the coaching staff will look to help Stephen develop as he continues to grow as a footballer. It is easy to forget when watching him that he is only 19 and has plenty of time to improve.

Despite only having scored two goals and registered one assist, Stephen is looking to either shoot or cross when he gets into attacking positions. In comparison to the rest of the league’s full-backs, Stephen is in the top 10 for shots. With an average of 0.92 shots per 90, Stephen has an impressive xG per shot of 0.12, the highest of those in the top 10 for his position. He has exceeded his 1.77 xG for the season and will be looking to add at least one or two more goals before the end of the season. 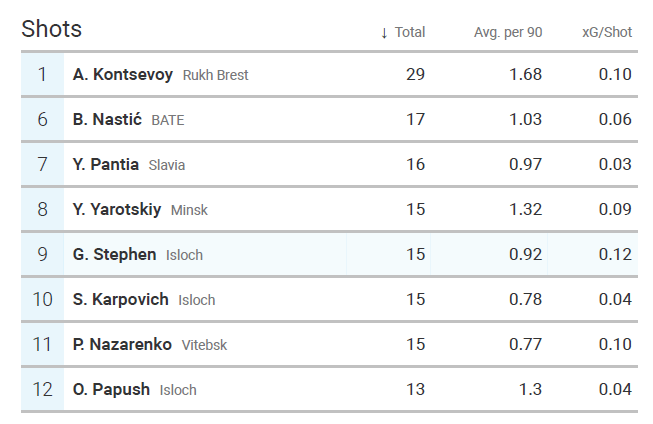 In terms of crossing, Stephen is averaging 5.49 per 90, the second most in the league. His success rate is 37% is impressive for a young player and suggests that he may even be able to improve this number as he continues to develop as a player.

Reading the game is important and Stephen has shown signs that he can make the right decisions. For example, his goal against Slutsk highlighted how he can read the game and put himself in areas to be dangerous.

In this first image we see the player highlighted at the top of the screen in a one on one situation with the opposition right-back. For most of the game, Stephen had looked to beat this player, get to the line and cross. However, he reads the body shape of the defender who expects this and comes inside instead. 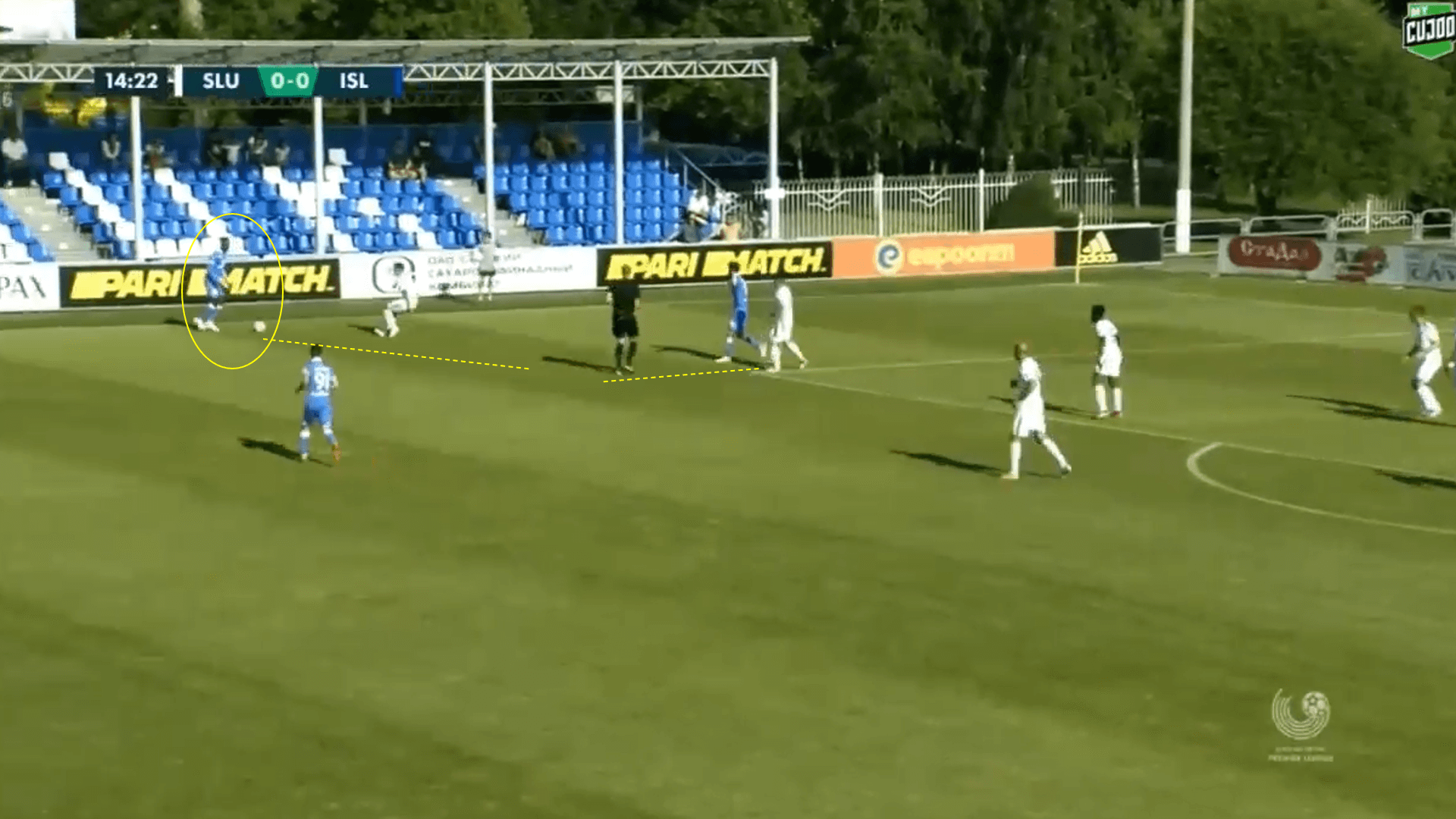 This drags a defender out of position to close down Stephen after he has beaten his man, allowing him to drop it off to Oleg Patotski. The original decision not to look for a cross has allowed Stephen to create even more space for himself, and as we see in the below image he is already looking to break into the gap left by the defender he pulled out of position. 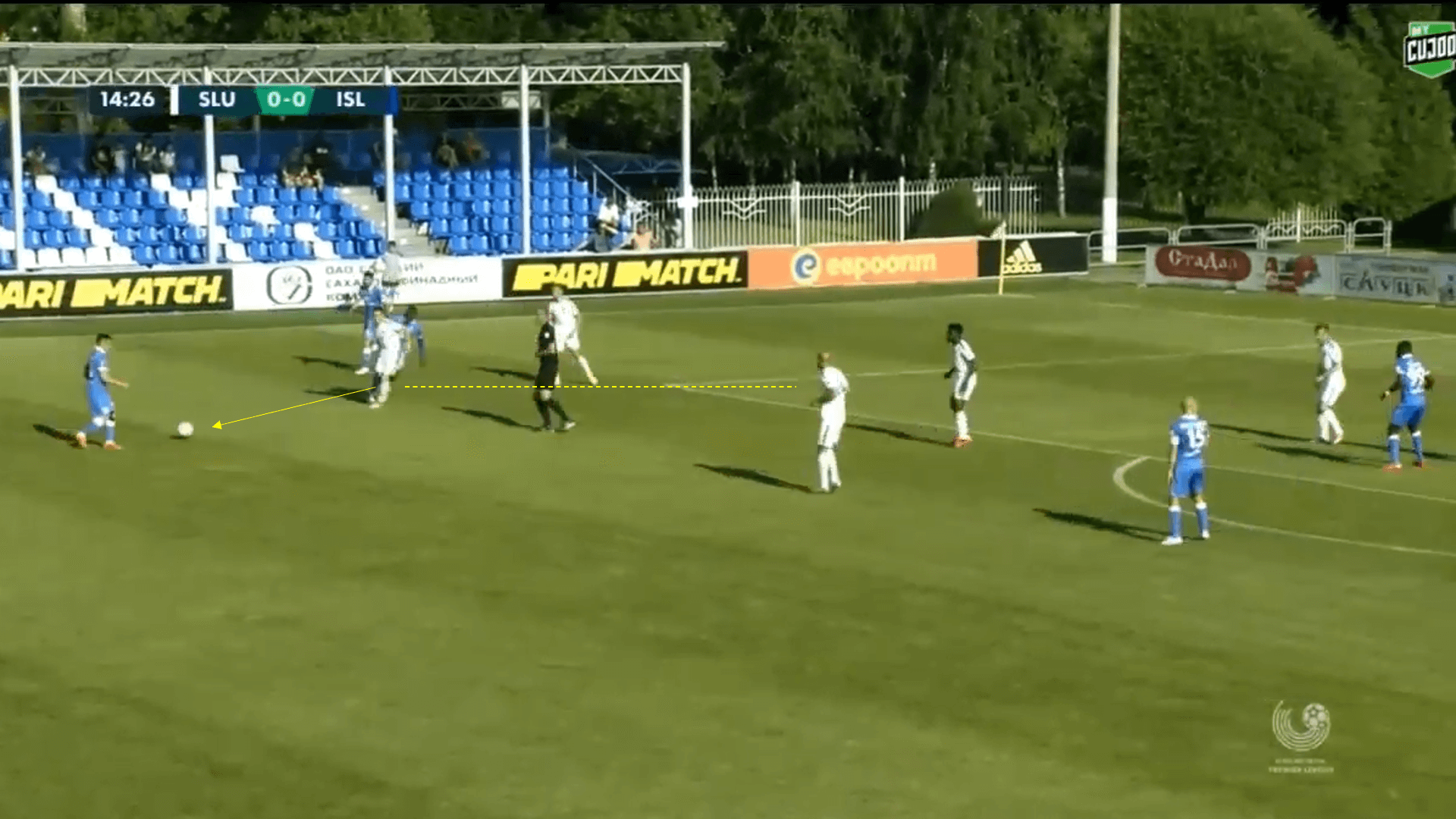 As the play progresses, Patotski’s ball to the back post is nodded across the face of goal directly into the path of Stephen, whose run had found him on the edge of the six-yard box. He comfortably tucks the ball away into an empty net. This whole move was made possible by his original decision and ability to read the game. He created the space for himself and was rewarded. 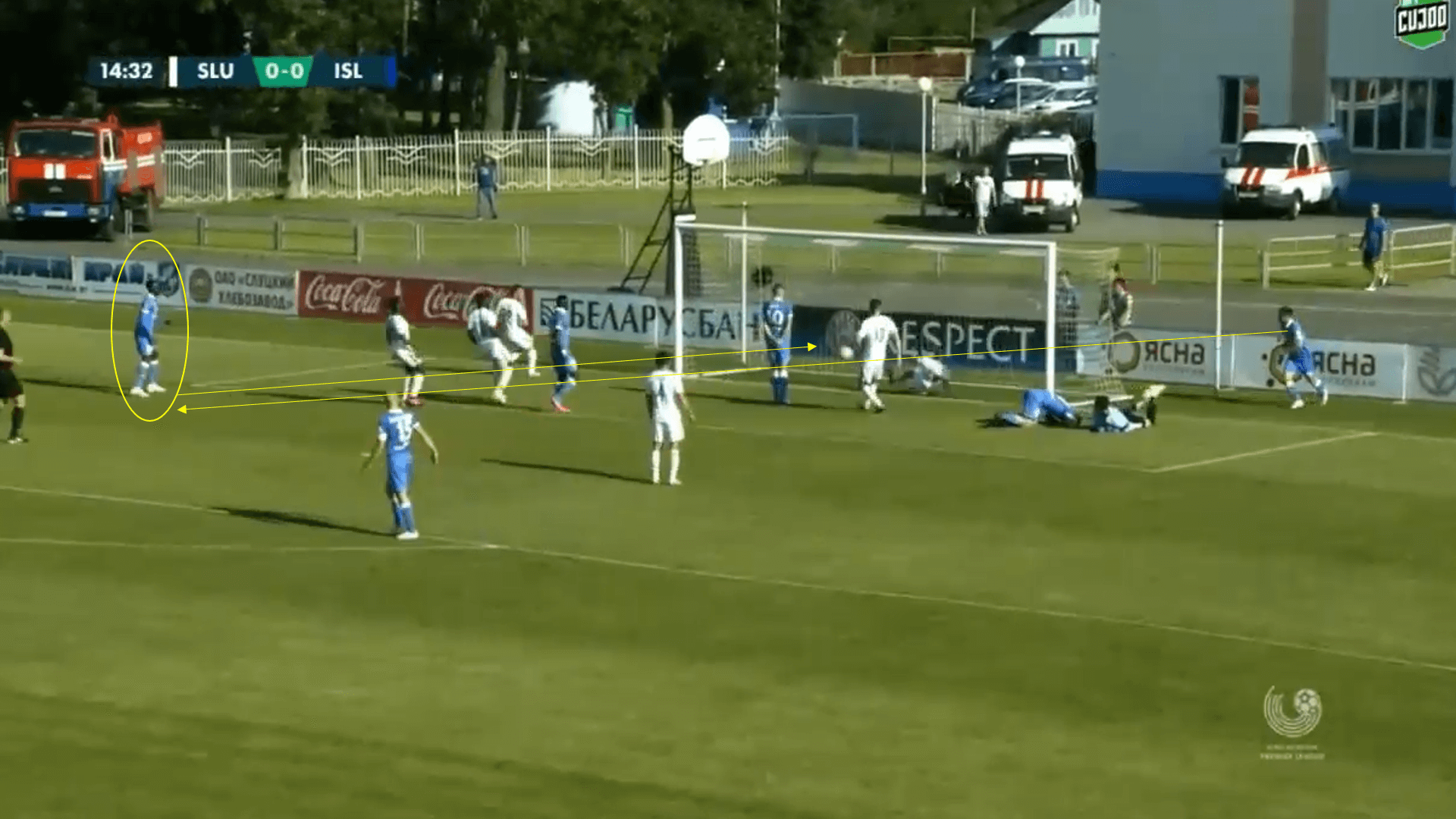 By being able to come inside as well as go on the outside, decision making for the defender against Stephen becomes even more difficult. His high dribbling success is down to the fact that as a defender you cannot show him onto one side, as he is comfortable and able to beat his man going inside or out. While his decision making is by no means perfect, he has shown that with experience he will certainly get better.

On the defensive end

At the other end, Stephen can certainly improve as a defender to become what would be known in basketball terms as a two-way player. Stephen averaged 5.86 defensive duels per 90, with an impressive success rate of 65.63%. As he gains more experience in the professional game, you would expect him to be even better at winning his defensive duels.

With his height, Stephen is expected to win plenty of aerial duels. Due to his positioning, he doesn’t have to deal with many aerial balls because of the back three deployed by Isloch. Yet he is winning 54.3% of his aerial duels. His defensive abilities do suggest that he can easily be deployed as a left-back in a back four as well as a wing-back. This versatility allows for different tactical approaches by coaches and can provide a great advantage to make alterations during matches.

Pressing is not part of the Isloch game plan. As a side, they sit 14th overall for pressing intensity, therefore it is difficult to judge how Stephen would fit into the pressing system. His individual stats for counter-pressing recoveries read at an average of 2.2 per 90. Despite being a player encouraged to get forward at all times, he is also under instructions to get back into defensive shape quickly, rather than look to win the ball high up the pitch.

When we look at the above graphic and compare it to his heatmap, we see how nearly all of his recoveries come in his own half. Stephen is averaging 6.16 recoveries per 90, by no means the highest in the league and around 50th compared to those in a similar position. Despite being considered a defender, it is this area of his game he would probably be looking to improve in the future.

Anyone who has watched 90 minutes of Stephen can see the potential is there. He has all the tools needed to become a successful left-back who can be very effective going forward. There are areas of his game that will undoubtedly improve as he gains more experience. He is certainly a player to keep an eye on in the Belarus league, as it is unlikely he will remain at Isloch for much longer given his performances.

For now, Belarus is the perfect league in which Stephen can develop his game, under a coach whose system he fits perfectly. Given perhaps one more season he should be ready to move to a bigger European competition to continue his development as a player.