On 21st September Ivan Rakitic retired from the Croatian national team. Needless to say, this surprised many fans across the country because everyone was expecting him to do it after the European Championship. Rakitić played a crucial part in their run to the silver medal in the 2018 World Cup where he showed his mental strength by scoring two winning penalties in the shoot-outs. Making a transfer from Barcelona played the part in his retirement as well because he will probably have more playing time in Sevilla than he had at the Barcelona last season which could impact his fatigue. Croatia needs to fill the void left with his retirement and this data analysis will help us find the possible solutions.

In the European Championship qualifications, Croatia mainly used these two formations when Rakitić was in the squad. 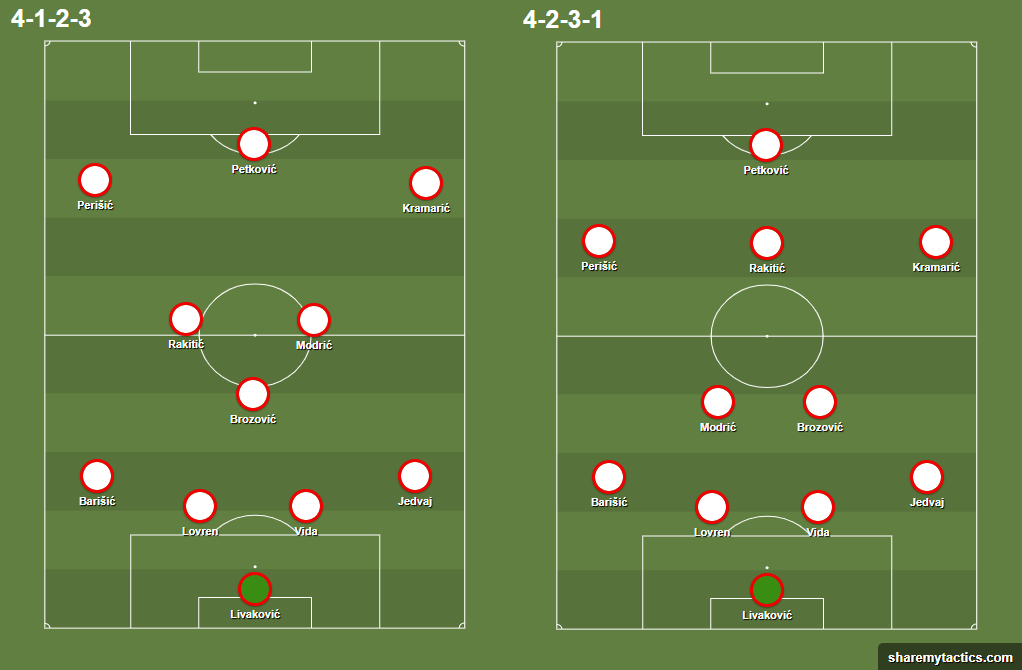 We can see that Rakitić got the ‘number 10’ role in 4-2-3-1 with Modrić and Brozović covering his back and letting him be more offensive-minded. In that formation, there is great balance because of Brozović’s work rate and stamina combined with Modrić’s anticipation and reading of the opponents’ intentions. That allows Rakitić to save himself for offensive duties and to be the main creator of the attack. Another thing that is a great addition is Rakitić’s ability to score goals as a midfielder who gets on cut-back passes and makes late runs into the opposition penalty area, which adds another dimension to this 4-2-3-1 formation. In 4-3-3 (4-1-4-1 when defending), Rakitić mostly occupies the left ‘number 8’ role. Brozović plays as a pivot in that formation which allows Modrić and Rakitić to make overloads on the flanks, creating triangles with the winger and the full-back to exploit the opponents’ defence. Rakitić played in many positions in midfield for the Croatian national team over the years, even as a left midfielder in 4-4-2, and he always played on an extremely high level and gave his best every time.

The next graph will show us the minutes played and age of all midfielders that played for the Croatian national team after the European Championship 2016. This will give us an insight on which players got a chance to play in midfield and what their future looks now after Rakitić’s retirement. The graph excludes players who are retired from football or from international football. 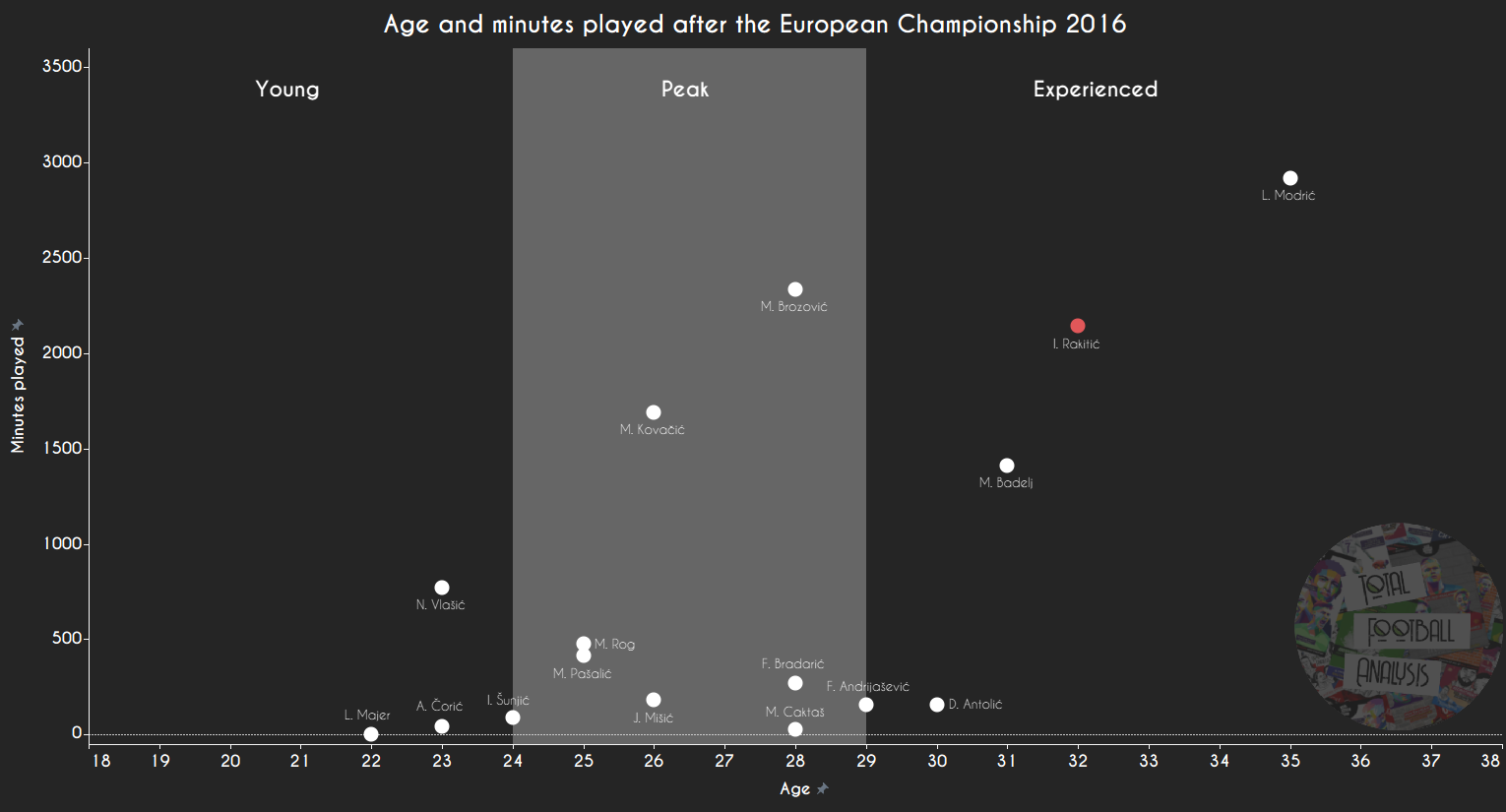 In the graph, we can see that Rakitić is the second-oldest after Modrić who played the most minutes. What is encouraging is that most players are at their peak or at a young age yet to reach their prime. Brozović played even more minutes than Rakitić after the European Championship, while Kovačić is close to their minutes tally even though he was mostly playing when someone was missing or as a first substitute from the bench. Badelj played a lot after the European Championship but lately, there were more chances for young in-form players like Vlašić and Pašalić. Players like Andrijašević and Caktaš are dominant in the domestic league but neither of those has enough quality to play football at the international level. From the domestic league, this season Lovro Majer caught the eye with his impressive performances for Dinamo as he is the youngest player on this graph and could be a future option in ‘’number 10’’ role.

After looking at the current midfielders and those who played for the Croatian squad, we will now analyse midfielders based on data and then explain how they could replace Rakitić tactically in Dalić’s preferred formations 4-2-3-1 and 4-3-3.

The graphs below will include possible options from those players who already represented their country (white dots) but will also include some interesting uncapped players who could get a shot in the national team (red dots).

First, we will take a look at the players’ statistics in terms of passing with a graph which shows the number of passes attempted per 90, passes into the final third per 90 and passing accuracy. 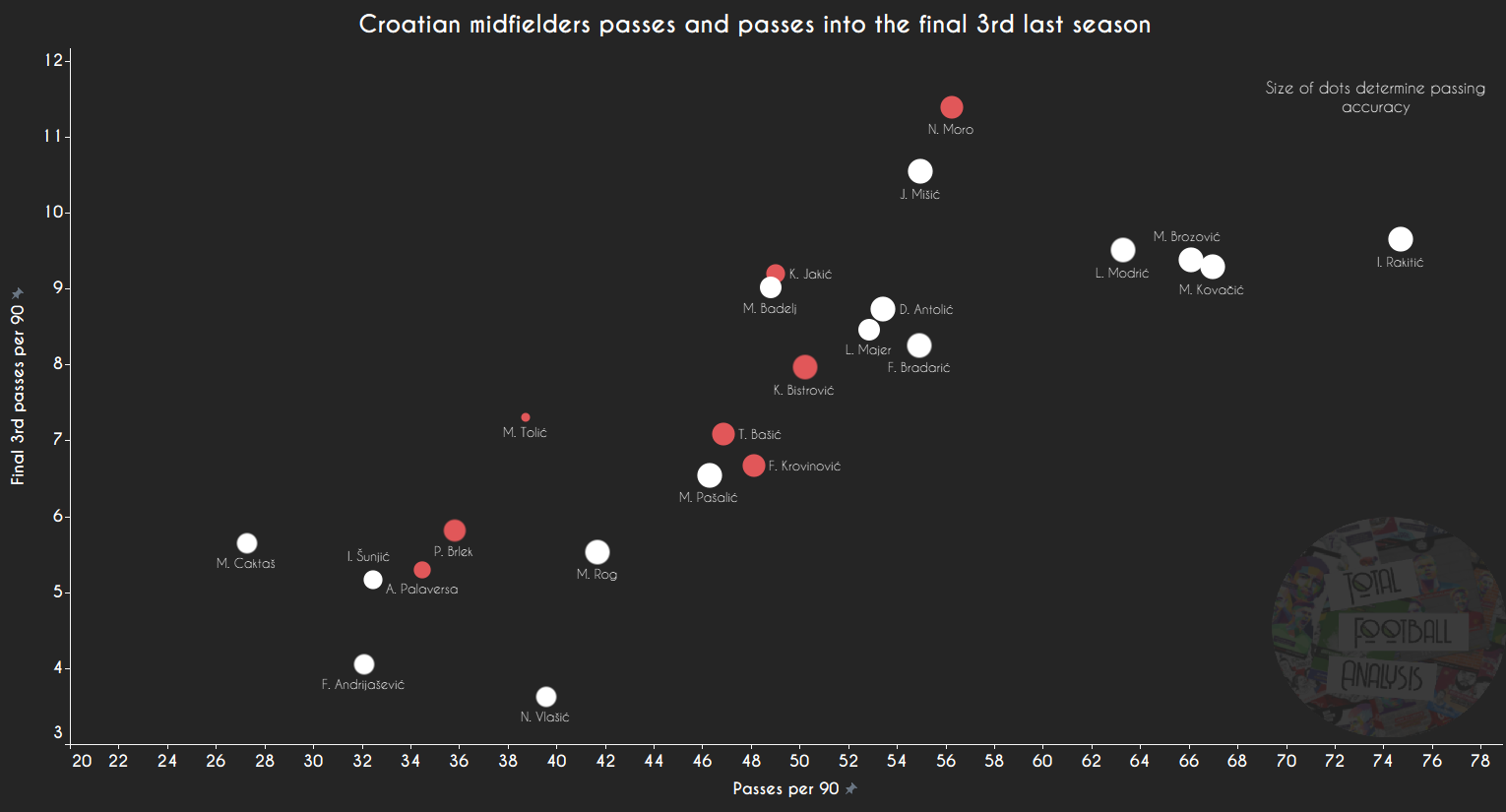 It was not hard to imagine that Modrić, Brozović, Rakitić and Kovačić would be above the others in the passes per 90 with all of them playing crucial parts for teams that have a lot of possession. Two players who look promising in this graph are Josip Mišić and Nikola Moro. Both of them have fewer passes than players mentioned above but both of them attempted more passes into the final third per 90. Moro averaged 56.27 passes per 90 with 11.39 passes into the final third per 90. He played for Dinamo Zagreb last season and played a big part in their decent Champions League campaign. The Croatian U21 captain made a transfer this summer to Dinamo Moscow in order to play in a higher quality league. Mišić, on the other hand, averaged 54.98 passes per 90 with 10.54 passes into the final third per 90. He showed clinical passing with 89.73% accuracy. Since season 2018/19, when he made the loan to PAOK, his qualities finally got recognised and PAOK fans deservedly gave him an award for the player of the season which only shows how good he was in Greece.

Now we will evaluate players based on their progressing ability. We will determine their ability with progressive runs per 90 and progressive passes per 90. 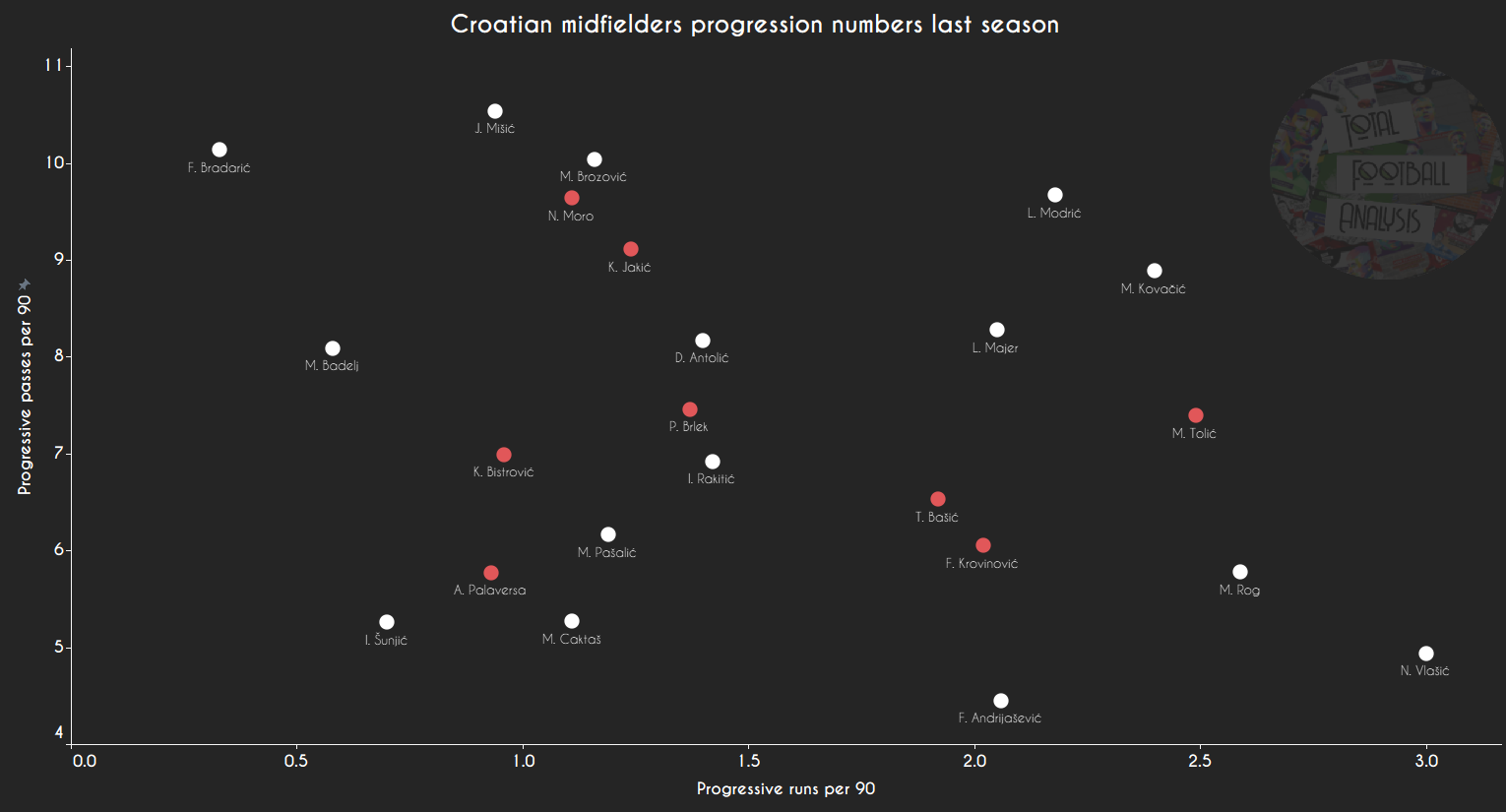 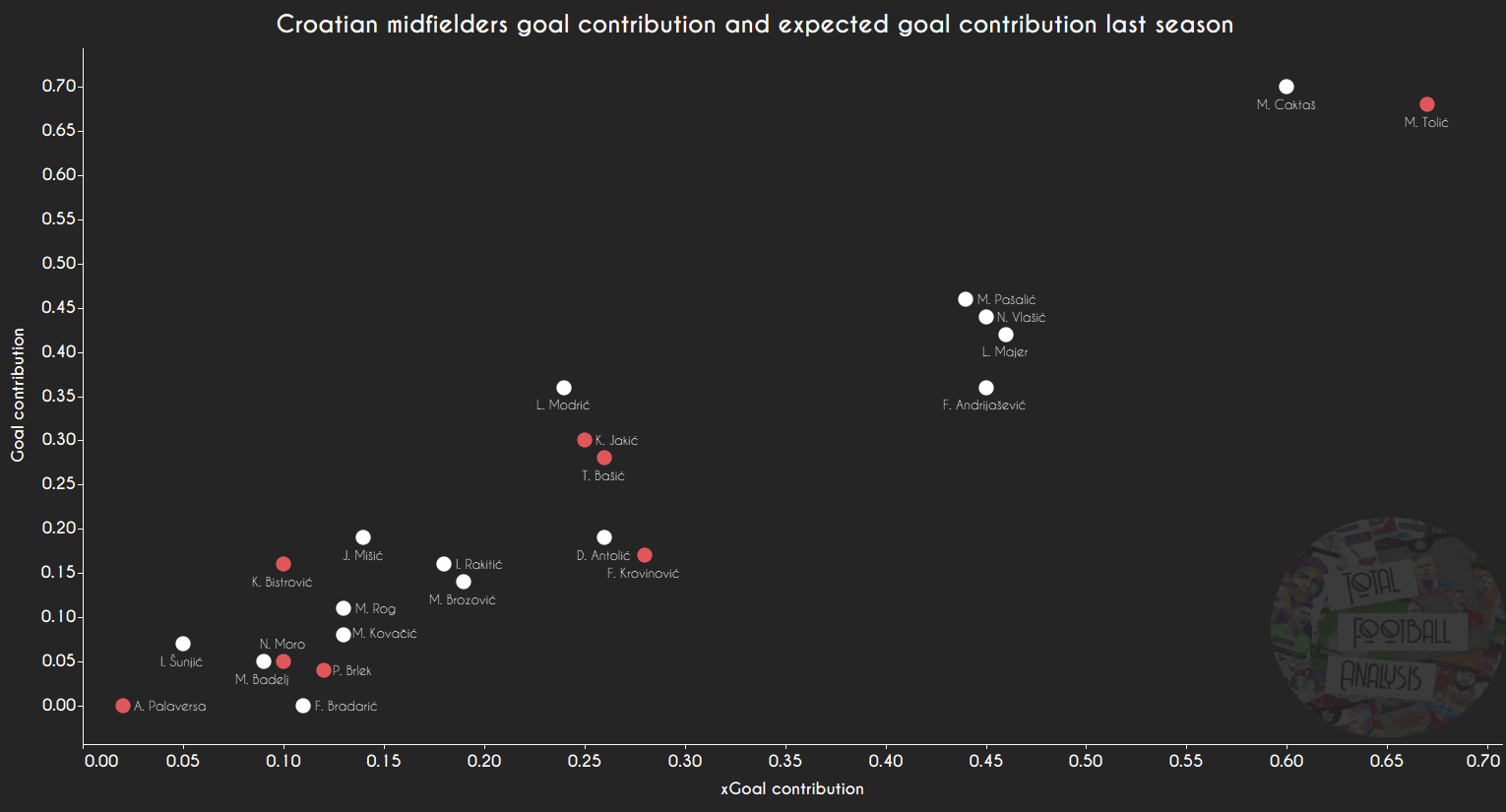 The graph above shows us how big an impact Mijo Caktaš and Marko Tolić had for their teams last season as the only two players who are above 0.5 in both metrics, which separates them from the rest. Both Tolić and Caktaš played more like shadow strikers than as attacking midfielders and the same can be said about Andrijašević. Pašalić and Vlašić had fantastic seasons behind them with the former having 0.46 goal contribution and 0.44 expected goal contribution as he was a big part of Atalanta’s successful season. Vlašić averaged 0.44 goal contribution and 0.45 expected goal contribution and was the best CSKA Moscow player without a doubt. Majer is the only player from those mentioned above that can be labelled as a playmaker and his left foot creates chances for his teammates on a regular basis in the 1. HNL matches.

Now we’re going to take a look at how those players look based on deep completions per 90 and touches in the box per 90. 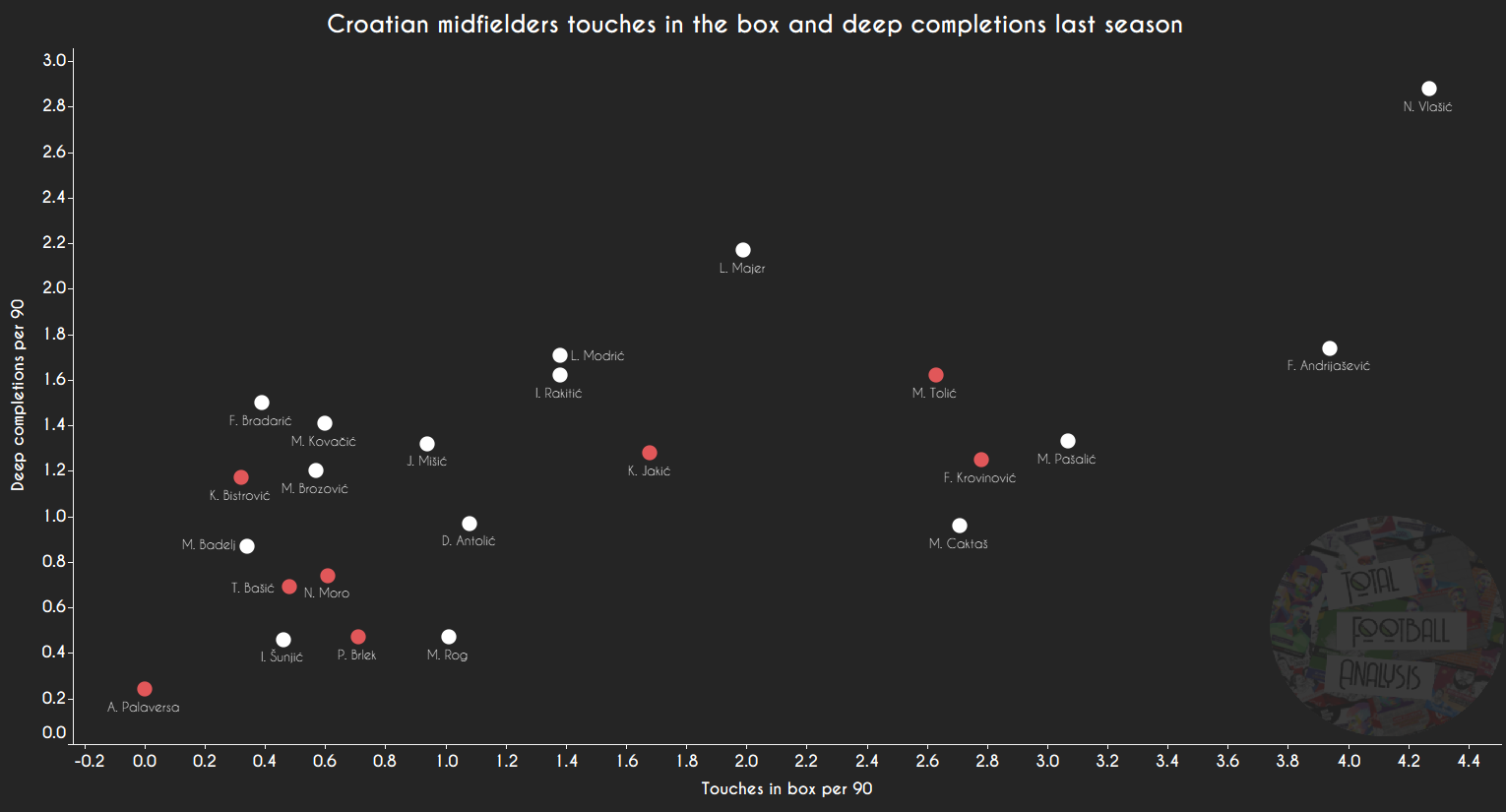 Vlašić is clearly above the others in these two metrics, averaging 4.27 touches in the box and 2.88 deep completions per 90. He scored three goals across six caps for Croatia in the European Championship qualifiers, which only confirms the goal threat he possesses. Pašalić is showing quality numbers once again, playing at the highest level in Italian Serie A and Champions League. Krovinović is a player who impressed for West Brom last season, helping them win promotion to the Premier League. His knee injury back in 2018, however, prevented him from being called to the World Cup that year despite a fantastic season at Benfica, which ended with him never making an appearance for Croatia. Krovinović averaged 2.78 touches in the box per 90 and 1.25 deep completions per 90. Majer is the second-best in deep completions with 2.17 per 90, confirming his playmaking ability.

Based on data we checked and player qualities, the best options for the attacking midfielder roles in 4-2-3-1 formations are Vlašić and Pašalić. We can give them an advantage over the others because they already played for the national team but also they are playing in good European clubs. Both of them are entering their peak and showed enormous progress in the last two years. In this formation, Vlašić would be in his natural position. He played a lot of seasons where coaches were constantly changing his position which didn’t allow him to perform at his best but in CSKA Moscow, they gave him a chance to play regular football as an attacking midfielder which paid off for both the club and Vlašić himself. His penetration through the middle is something that adds another dimension to the current squad full of players who prefer progressing with passing. Finally, his goal-scoring ability is something that is desirable from an attacking midfielder. 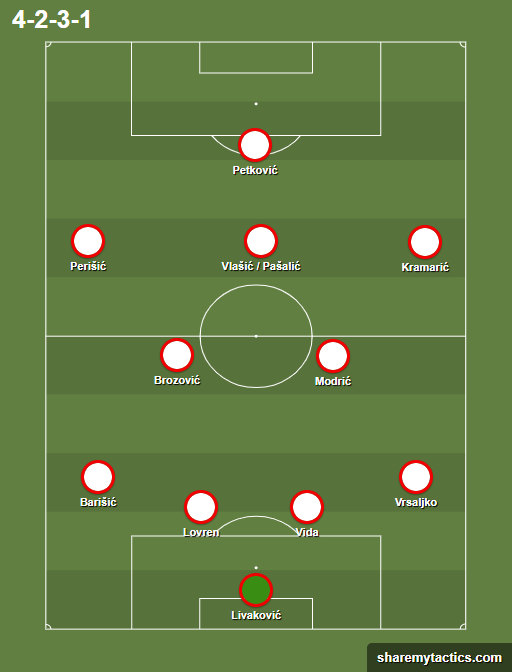 Pašalić is a really productive midfielder as well with plenty of goal contributions for his team. As opposed to Vlašić’s qualities with the ball, Pašalić’s quality comes from off the ball movement. He has a sense for open spaces and his timing to run into those spaces is perfect. Pašalić is a modern midfielder and his work rate off the ball is impressive, allowing him to roam across the pitch with Modrić and Brozović/Kovačić covering him, which could be tricky for opponents.

Other possible options are Lovro Majer and Filip Krovinović. The former is an option for the future and probably his call-up won’t happen until after the European Championship. He has enormous talent but needs to show consistency each week and also prove himself at a higher level. Krovinović, on the other hand, proved himself in a quality team like Benfica and also by playing in the world’s physically toughest league, the English Championship. He is now back at West Brom and his quality performances could help him get a ticket for the European Championship next summer. We can’t rule out possibly playing Kramarić behind the striker but this option would only be possible against weaker opposition.

This formation gives us a logical lineup from the start with Brozović as a pivot behind Modrić and Kovačić. This trio is currently the best Croatian football has to offer and if we choose playing the 4-3-3 there is no reason to believe that Croatia will play anything other than that. 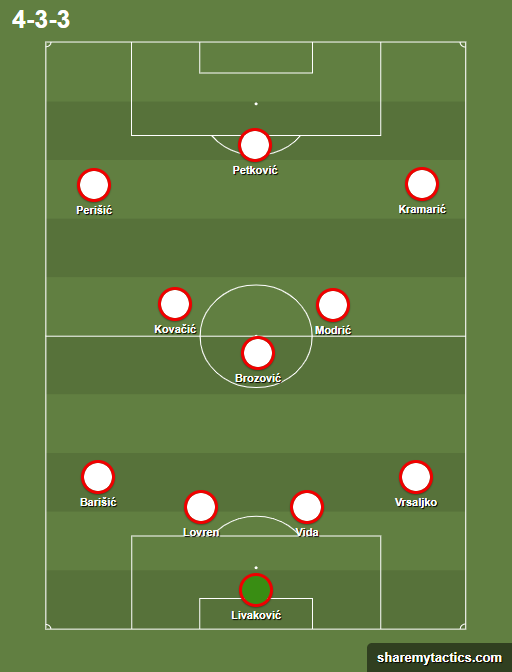 Croatia has plenty of options in this formation, even with the fact that Vlašić or Pašalić would have less of a creating duty in a 4-3-3 than the trio mentioned above. Badelj is not the player who Croatia counts as a first-team regular but his experience and quality is crucial in situations when there is a need for more control of possession and to calmly bring the game to the end when leading. Based on the data, we can say that Moro and Mišić have all the reasons to believe that they will get their chance in the national team. For Moro, it is only a matter of time for his first call-up after he finishes with the U21 campaign. He not only stands out for his passing qualities but also with the defensive output as well. He understands the game outstandingly which allows him to be one step ahead of his opponents and combined with his work rate he is an all-around midfielder. Mišić underwent surgery after the season and his comeback is expected in December. If he is able to pick up where he left off last season, he has reasons to hope for a call-up. His outstanding passing ability would fit great in the current playing style and would give stability in the heart of the pitch because of his aerial strength combined with his frame. Mišić surely has a future in the Croatian national team with possible retirements of Modrić and Badelj next summer.

Players that should be monitored for the future are Toma Bašić and Kristijan Jakić. Both of them have the potential to be quality midfielders and they could take a step forward if they keep making progress this season.

Based on this analysis, we can conclude that Croatia is ready for Rakitić’s retirement. Kovačić, Vlašić and Pašalić are playing on a high level and based on his preferred formations, Dalić has quality options in both formations. It will be hard to replace Rakitić instantly but over the next matches, there will be enough chances for all players to adjust to the current situation. Dalić has quality options in the current squad but also some interesting players who are waiting for their call-ups.