Barcelona Femini have been in devastating form in this 2020/21 season. They remain undefeated after 10 matches, two points clear of second-place Real Madrid Feminino, with three games in hand. They’ve also qualified for the next stage of the UEFA Women’s Champions League after beating PSV Vrouwen 8-2 on aggregate. Their incredible start to the season has been a cumulation of individuals contributing to the collective but one player has stood out impressively and has arguably been their best player, Alexia Putellas.

The Barcelona Femini midfielder has played flawlessly over the last few months and has arguably been one of the best midfielders in world football. The Guardian ranked her at 23 ahead of the likes of Daniëlle van de Donk, Lieke Martens, and Sara Björk Gunnarsdóttir showing how she’s performed in 2020.

Through this scout report, I will be explaining and detailing the key traits that have contributed towards Putellas’ incredible run of form. I will break down the analysis into her on the ball and off the ball attributes to see where her strengths lie.

Alexia Putellas is a player in her prime at the age of 26. A creative central midfielder, Putellas’ has a range of attributes that contribute to her role in midfield. Her role as a deep-lying playmaker, Putellas’ contributes to both the build-up and attacking phases. Her role in build-up is to pick up possession from the lone pivot and spray passes forward being such an adept player in possession especially under pressure.

Being able to navigate her way out of high pressing sides makes her a viable option to build out from. Putellas is a great player in transition with her positional and passing intelligence. With a wide range of passing, Putellas can play simple short passes as well as more extravagant and riskier through balls. In the final third, she acts as both a connector and off-the-ball runner finding spaces in the box which makes a goal-scoring threat.

She’s the type of player that a team can build around because of her ability to affect both ends of the pitch with her awareness and intelligence. I would liken her style to one of LaLiga’s best playmakers in Luka Modrić who both have an uncanny ability to dictate play and look effortless in possession with precision passing abilities. The Croatian pass master makes Real Madrid tick, similarly, Putellas is held in the same regard at Barcelona Femini.

Barcelona Femini’s style of play is reminiscent of their male counterparts in which they focus on possession, rotations, and movements to progress play and break down opposition defences. Total Football Analyst David Seymour has recently written a detailed breakdown of Luis Cortes’ tactics but I will explain parts of it to put Putellas’ role into perspective. 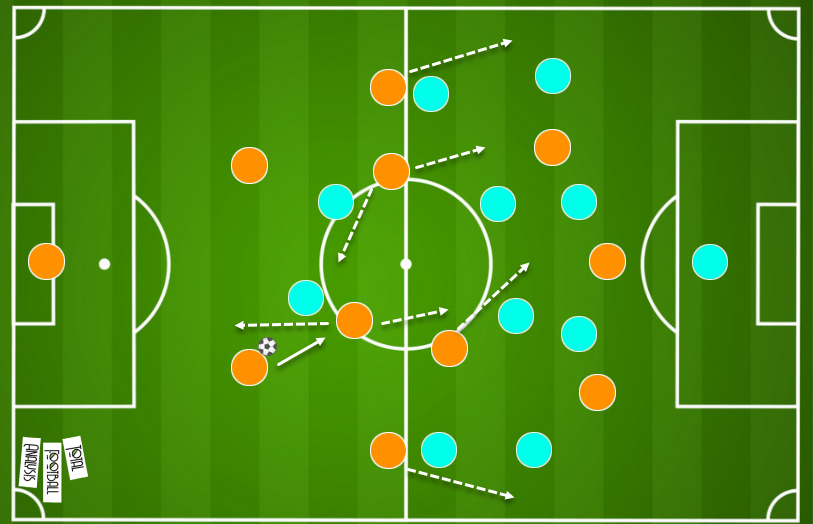 Barcelona play in a variation of a 4-1-4-1 and 4-3-3 but both systems are interchanged in the game. They play out from the back and have one pivot always available as a passing option. However, to avoid the opposition from man-marking and stopping their build-up, Cortes brings a second midfielder deeper. This ensures that space is always open which means all three midfielders need to be competent on the ball. The central players without the ball are encouraged to make runs into the channels to create overloads with the wingers. The graphic depicts Cortes’ preferred system and movements wanted by his players.

Putellas is an excellent ball-player and one who is constantly looking for it. She is one of the players who will assist in build-up because of this. Her on the ball skills revolve around passing and dribbling which is supplemented by her ability to be press resistant. In her attacking ‘8’ position, Putellas will often be the main passing option alongside Kheira Hamraoui and further forward with multiple passing options.

In both situations, Putellas can showcase her intelligence by making good pass choices with the right type or weight of pass. At the time of writing Putellas averages 9.22 final third passes, 4.15 long passes, and 1.08 through passes per 90 minutes. 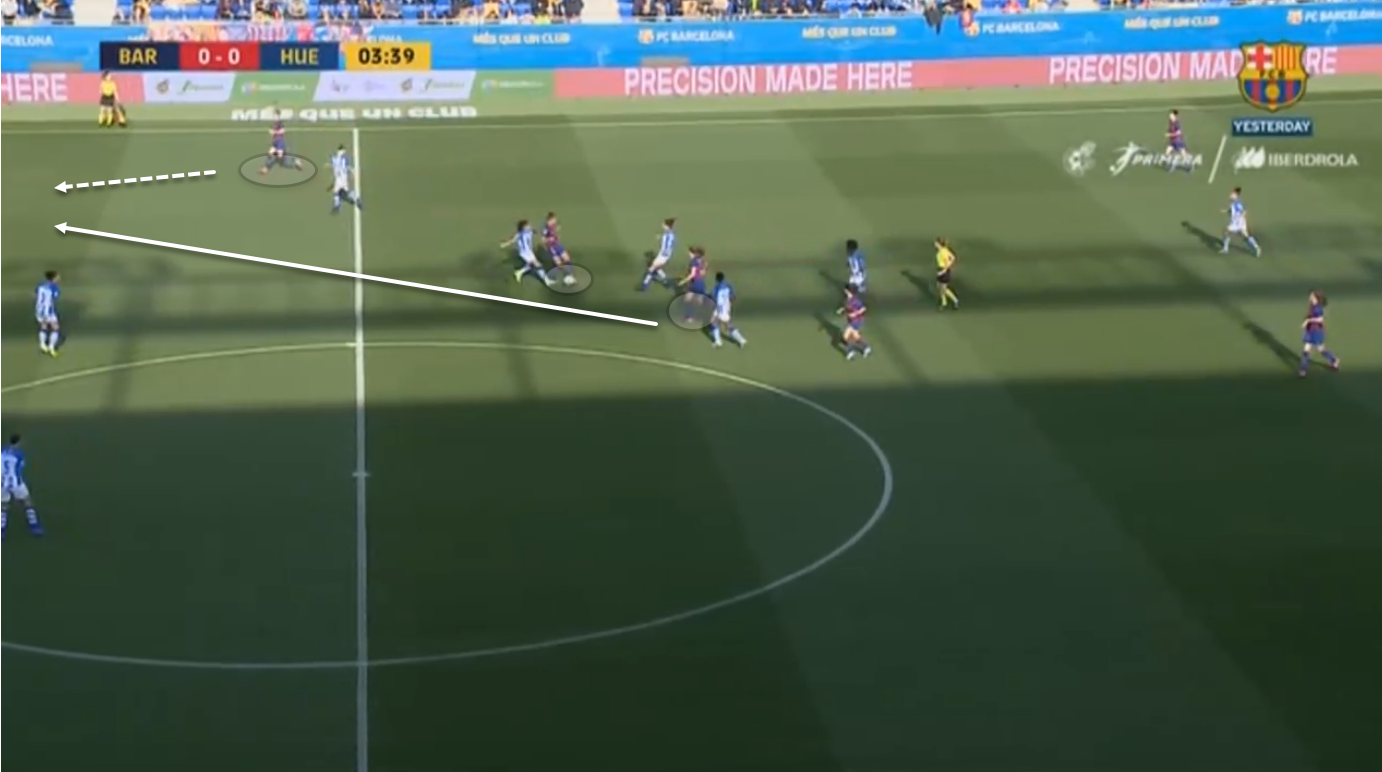 Here we can see the Spanish midfielder amid a transition counter-attack. Putellas was involved earlier in the move and made a run forward to receive the return pass. She is always one to demand possession and put herself in a position to make things happen.

Upon receiving the ball she immediately passes the ball into the highlighted gap which puts the wide player through on goal. Putellas wastes no time and uses her game sense to make a quick decision rather than linger on the ball before the chance goes begging. The image below shows her composure in a high pressure situation in her own 18-yard box and how she manages to calmly pass her way out. 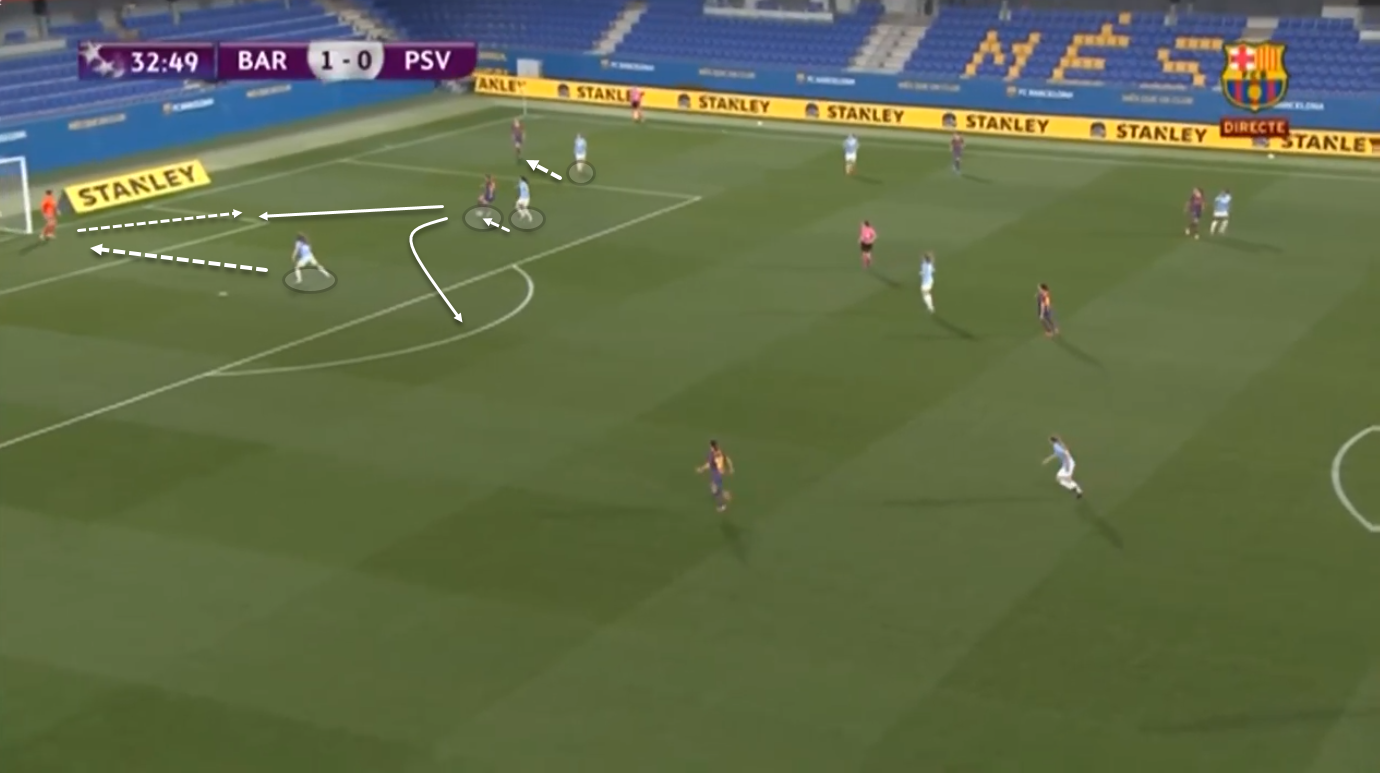 I touched upon the notion of Putellas’ press resistance which can be seen in both attacking and defending situations. What this means is Putellas is able to find a way to either relieve pressure off her team or salvage an attacking move by keeping and relaying possession elsewhere. In both scenarios, Putellas’ ball-carrying abilities are a core reason for her success in this area.

If you look at some of the best central midfielders, you’ll notice how they’re all able to effectively keep the ball ticking over without losing out. Julie Ertz, Amandine Henry, and Kim Little are players who are excellent in being press resistant through dribbling and passing. It’s little wonder why all three players are their respective teams’ ball carriers.

Putellas’ 5.38 dribbles and 11.83 offensive duels per 90 minutes shows frequency in going forward and engaging in duels when on the ball. 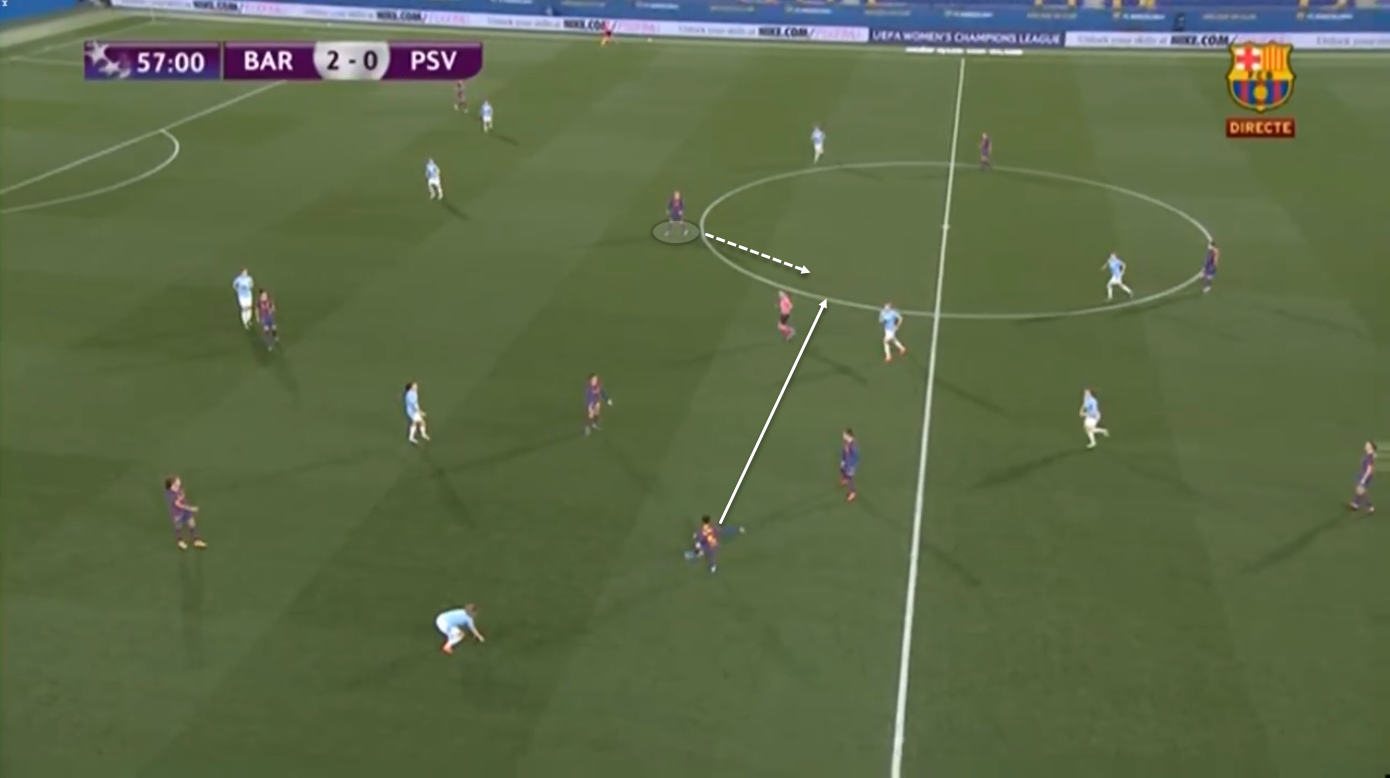 Here Barcelona are building an attack against PSV and the ball carrier is looking for a passing option forward. Looking for Putellas the pass is misplaced but the Spaniard still manages to receive it. 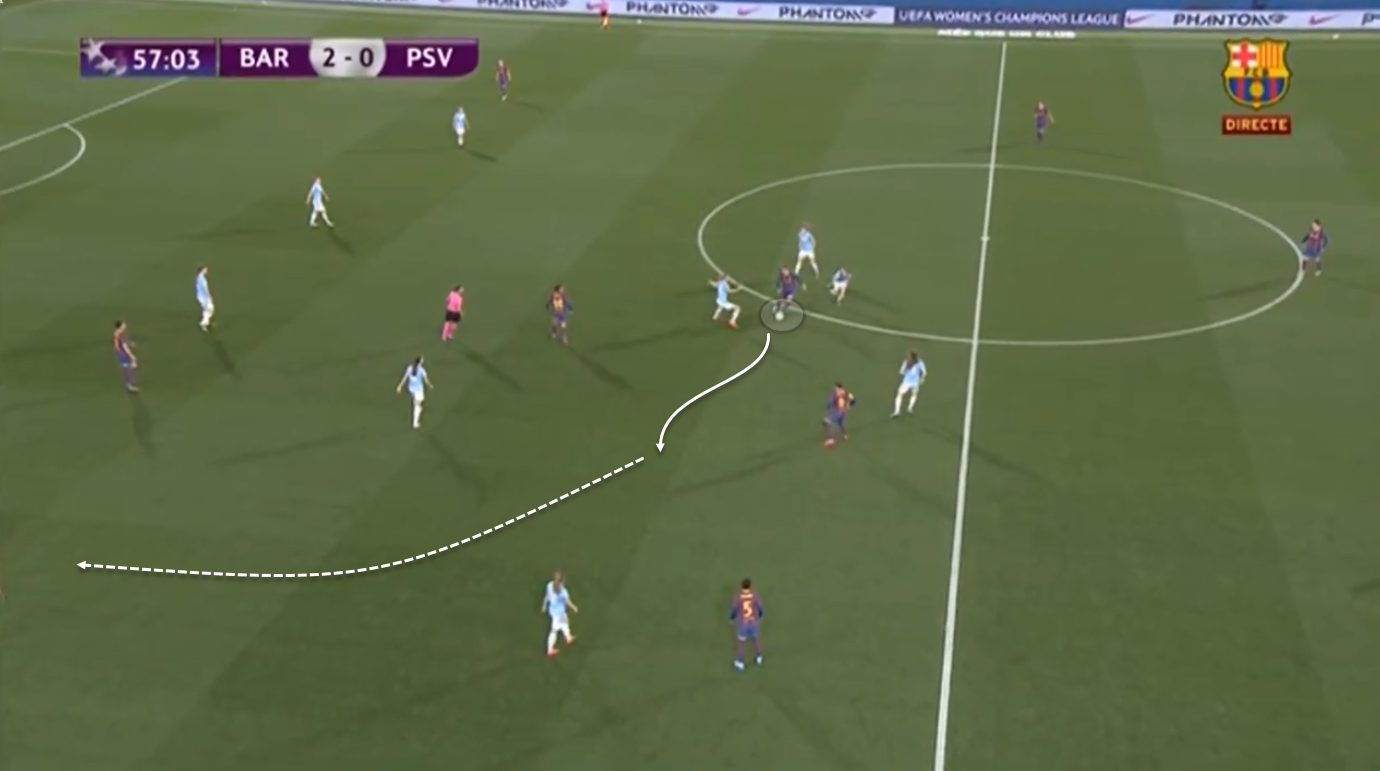 She moves the ball very quickly and manages to bypass three pressing midfielders and progress the ball forward. This prevents Barcelona Femini from being exposed to a counter-attack where they were potentially open to a 4v3. Putellas’ quick feet manage to relieve the pressure and put Barcelona in a better attacking position.

It’s not just the work Putellas does on the ball but it’s her off the ball work that has contributed to her excellent form this season. Arguably, this is what makes her such an intelligent player which has seen her score goals and progress the ball forward. In her midfield position, Putellas is seen both in deeper areas to receive passes and further forward where you’ll find her in a position where she can make late runs into the box. Due to Cortes’ use of full-backs and wingers, it allows the central players to make horizontal runs into the channels and get on the end of pull-backs and crosses. 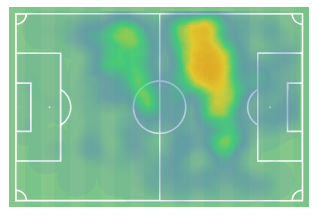 This is how Putellas gets most of her goals. While she does have a great shot on her, it’s her ability to find spaces and use them effectively which is her best trait. The above heat map shows her whereabouts on the pitch and the spaces she likes to occupy. You can see how the left half-space is most ‘active’ and if you look a bit closer, you can see there is movement in the box. Another point to take from this heat map is her coverage. Being such a creative central midfielder can sometimes mean a player like this limits themselves to one area, however, Putellas’ ‘activity’ both horizontally and vertically means she is very athletic and has the capacity to move around making her an almost roaming playmaker. 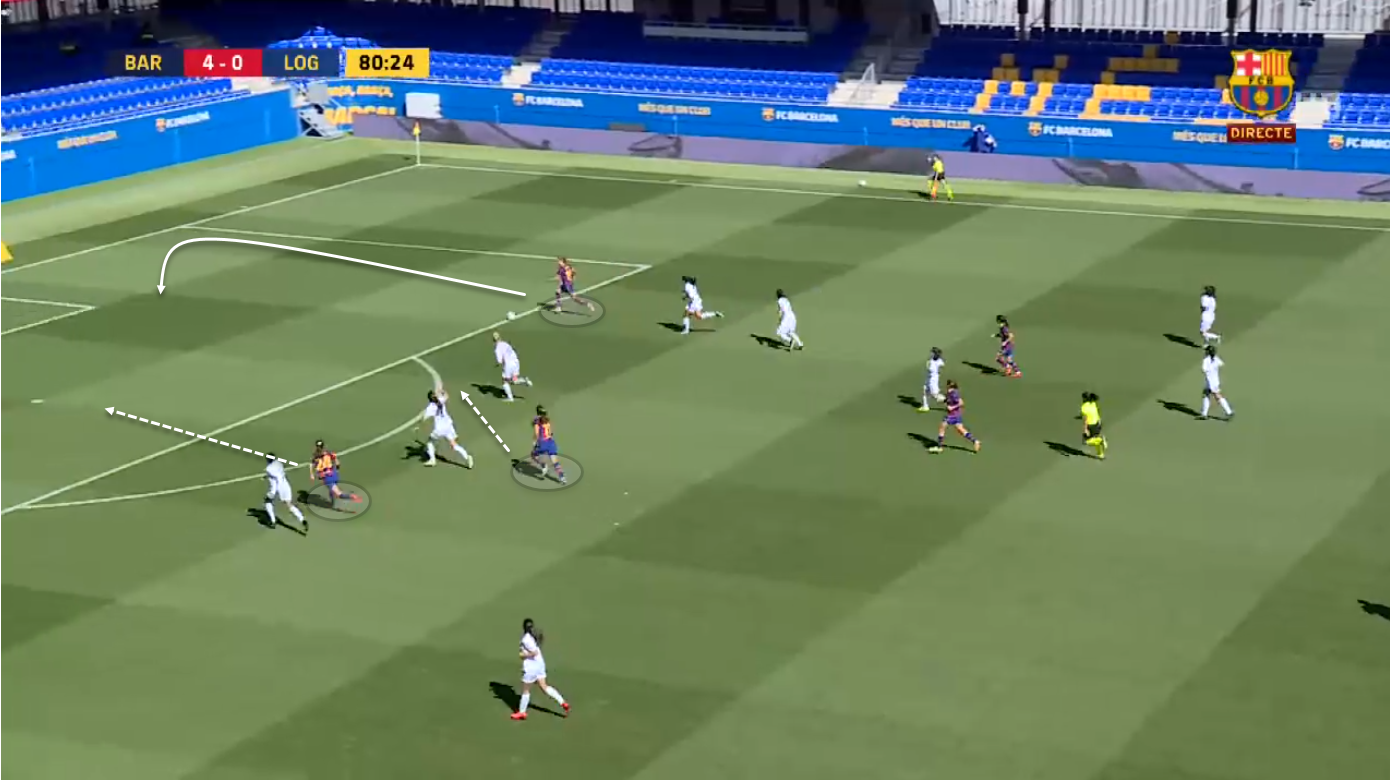 Here we can see an example of Putellas’ excellent timing and intelligence in an off the ball situation. Barcelona Femini are on yet another attack and have ventured forward attacking in numbers. While the opposition defence are aware of the two forward Barcelona players, it makes it easier for them to mark and stop the cross into them. Putellas, however, (highlighted) is slightly behind and identifies a gap to exploit. 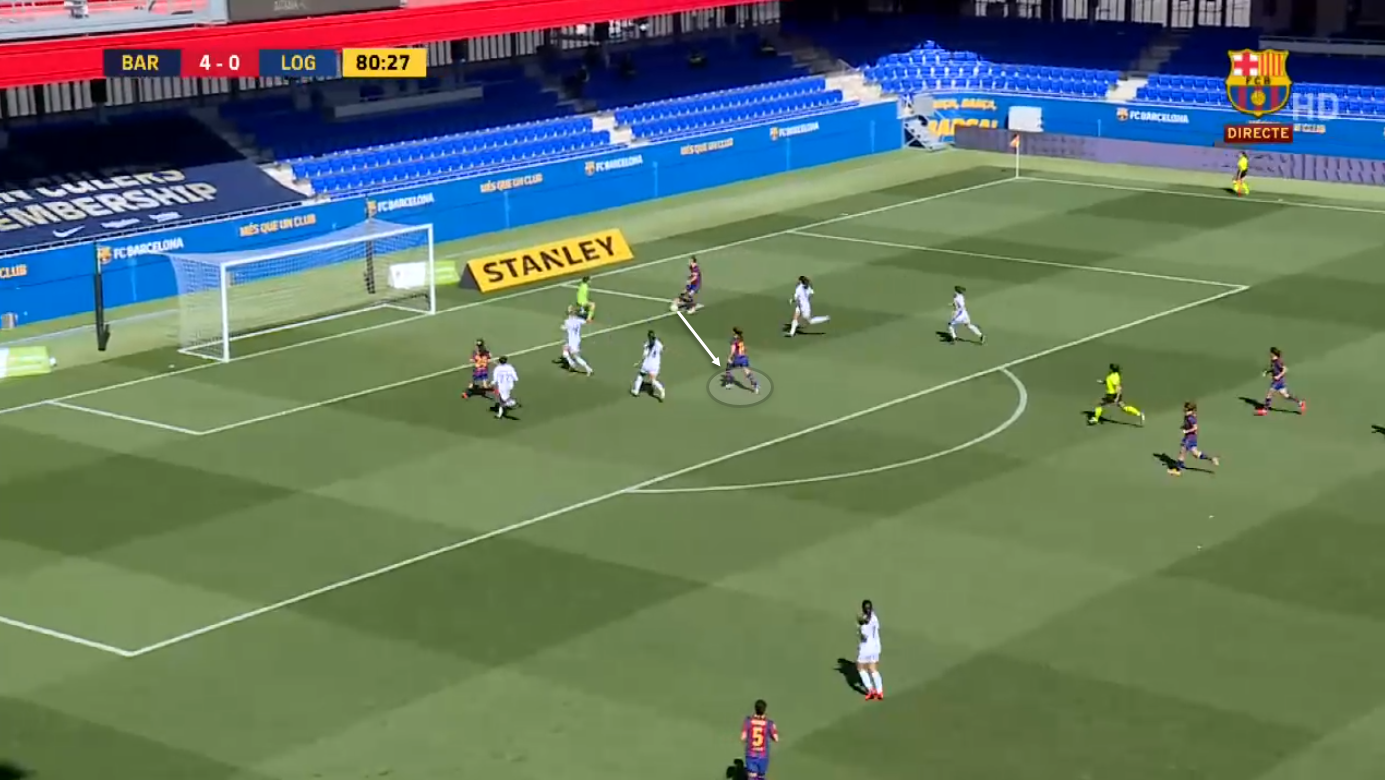 The way she executes this is through precision timing and movement. Putellas holds her run and manages to move into a position between defenders to take on the cross. A step too much or too little could have seen an interception being made but Putellas understands how and where she needs to be in the box. 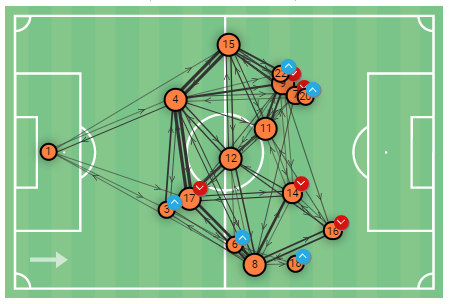 The pass map below shows her average position being a very central and attacking player that can control matches and make calculated runs when required. This makes it extremely difficult for the opposition to mark her due to both her positioning and constant movement.

Besides her goal-scoring exploits, Putellas is a keen and aggressive presser which also makes her an effective defensive presence. Because of her ability to understand and identify space, Putellas is able to use that ability and translate it into taking up good defensive positions. With Barcelona Femini’s nature of playing higher up the pitch, they are vulnerable to being caught on the counter-attack and naturally will need to track back assuming a defensive shape.

The heatmap has shown us Putellas’ box-to-box like qualities by being as active in the defensive half as she is in the attacking half. Below you can see an example of Putellas’ aggressive nature and how it works in high pressing systems. Though this is from a game for Spain, the principles in her game remain constant for club and country. The patient build-up from Japan is met by a high pressing Putellas closes down the #17 midfielder quickly and creates a goal-scoring opportunity. 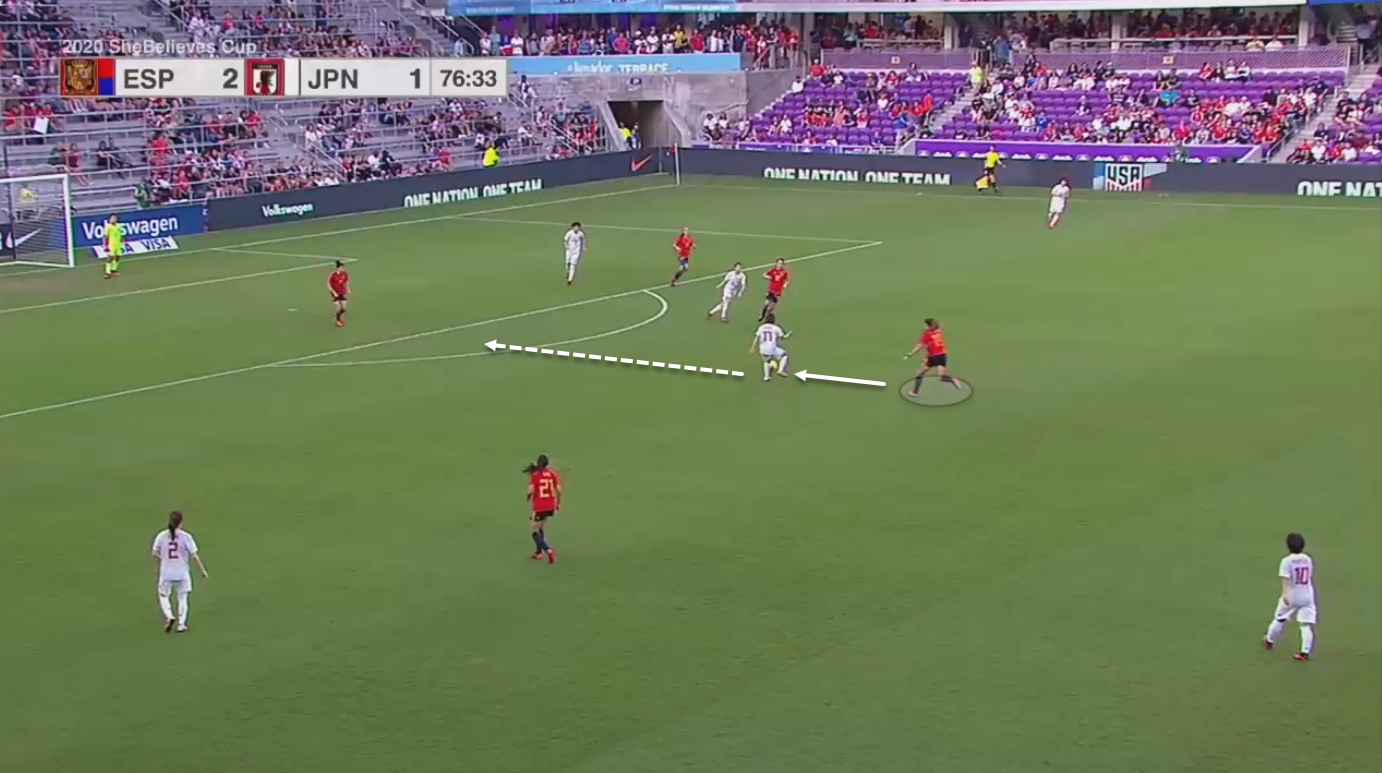 This can also be seen in her defensive numbers for Barcelona Femini this season where she registered 4.37 defensive duels per 90 (73% success rate), 3.64 interceptions per 90, and 7.72 recoveries per 90 with 70% of them in the opposition half. These three statistics suggest a large contribution from the Spaniard making her an integral cog in Cortes’ midfield three.

Putellas is athletic as I’ve pointed out earlier which makes it easier for her to get into position. Having seen her defend from the front, there are moments where she is needed further back. Putellas acts as a first line of defence and if successful can put Barcelona back on the front foot.

As the example below portrays, Putellas moves into a defensive position against the Real Madrid attacker. She reads the ball carriers intentions and quickly turns back to block the outgoing pass. This interception puts Barcelona Femini on the counter-attack as a result. 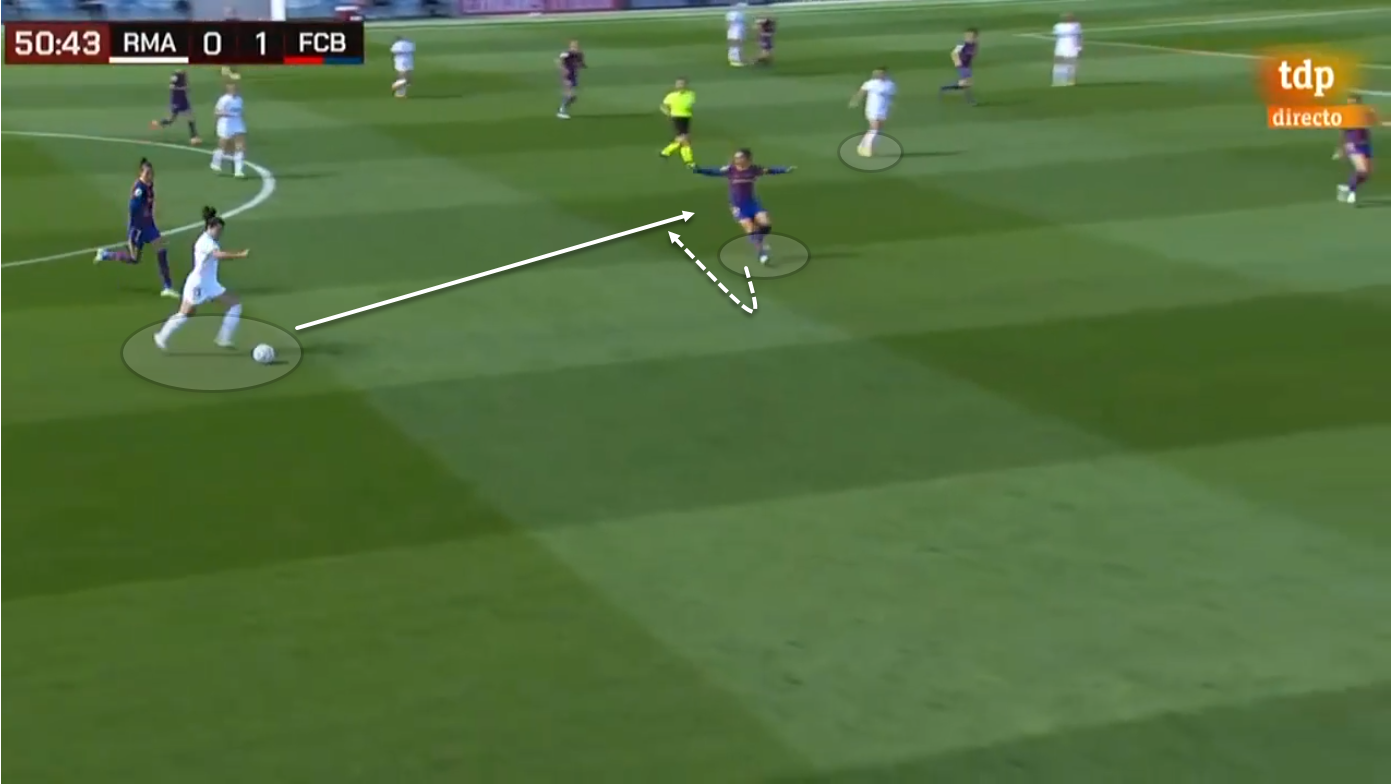 At 26 years of age, Putellas is coming into her prime and has shown scintillating form for Barcelona Femini this season. The team are soaring in the Primera División and have qualified for the Round of 16 in the UEFA Women’s Champions League and that is thanks to Alexia Putellas.

Through this tactical analysis, the Spaniard is excellent in transition and breaking down blocks with her range of passing and exquisite movement. While the team will need to perform at their best throughout the UWCL, there is a feeling that Olympique Lyon Feminin are not at their optimal best which lends an opportunity for another club to break their dominance this season. If Putellas can keep her form up, she can lead Barcelona deep into the UWCL and reach the final just as they did a couple of seasons ago.