Who is Canada’s next superstar in the making at Chelsea Women?

The FAWSL has increased in profile and reputation this summer with the arrival of several big names like Pernille Harder, Valerie Gauvin, and Caitlin Foord. Amidst the arrival of big names, one of Chelsea Women’s signings was one for the future. The signing of Jessie Fleming caused quite a stir with the young Canadian being touted as a future star.

Canada has a number of talented players at their disposal with Paris Saint-Germain duo Ashley Lawrence and Jordyn Huitema and the legendary Christine Sinclair. Huitema is making her name in Paris and now the young Fleming is looking to do the same in England.

This scout report will take a closer look at Fleming’s attributes and tactics that make her such a talented player and one to watch out for in the FAWSL.

Jessie Fleming is a 22-year-old central attack-minded midfielder who is capable of playing both as an ‘8’ or ‘10’. Regardless of position, Fleming’s main attribute and role is that of a playmaker with excellent ball carrying and passing abilities. She has the intelligence to find spaces and look for gaps in opposition defences to thread through balls.

Equally, she’s very effective at carrying the ball over short distances making her viable in compact defences. Being slight in frame, it gives Fleming a low centre of gravity which makes her adept at gliding through the midfield. She is technically proficient and has the ability to manoeuvre herself out of tight situations and play a pass and progress the ball through transition.

Fleming’s off the ball movement is equally impressive with enthusiasm and aggressive pressing style which is a requirement for a modern-day central midfielder.

Fleming is a player that is effective with the ball at her feet. With an impressive range of passing, she’s able to pick out players and unlock compact, low block defences. For both club and country, Fleming plays as a part of a double-pivot with a play style that is more aggressive as she likes to play slightly higher up the pitch. You’ll find her moving to the edge of the box and look for passing options in the box trying to break down defences.

Chelsea play in a 4-2-3-1 which means that a more defensive-minded partner is required to allow her to play her natural game. She’ll be used in the double-pivot and considering Chelsea will dominate possession in most games, it means that Fleming will have more flexibility to play riskier passes due to the number of options available in front of her. 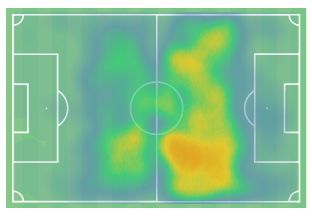 The heat map above is indicative of the areas she prefers to occupy. We’ve used her total career games due to the lack of games she’s played for Chelsea Women. As you can see there is more activity in the final third of the pitch, just outside of the box which suggests that she’s more of a creator and controller than goal-scorer. Fleming averages 2.05 through passes and 5.86 final third passes which indicates her willingness to transition and play the ball into dangerous areas. The likes of England, Harder, and Kerr are excellent space runners and will benefit from her vision. 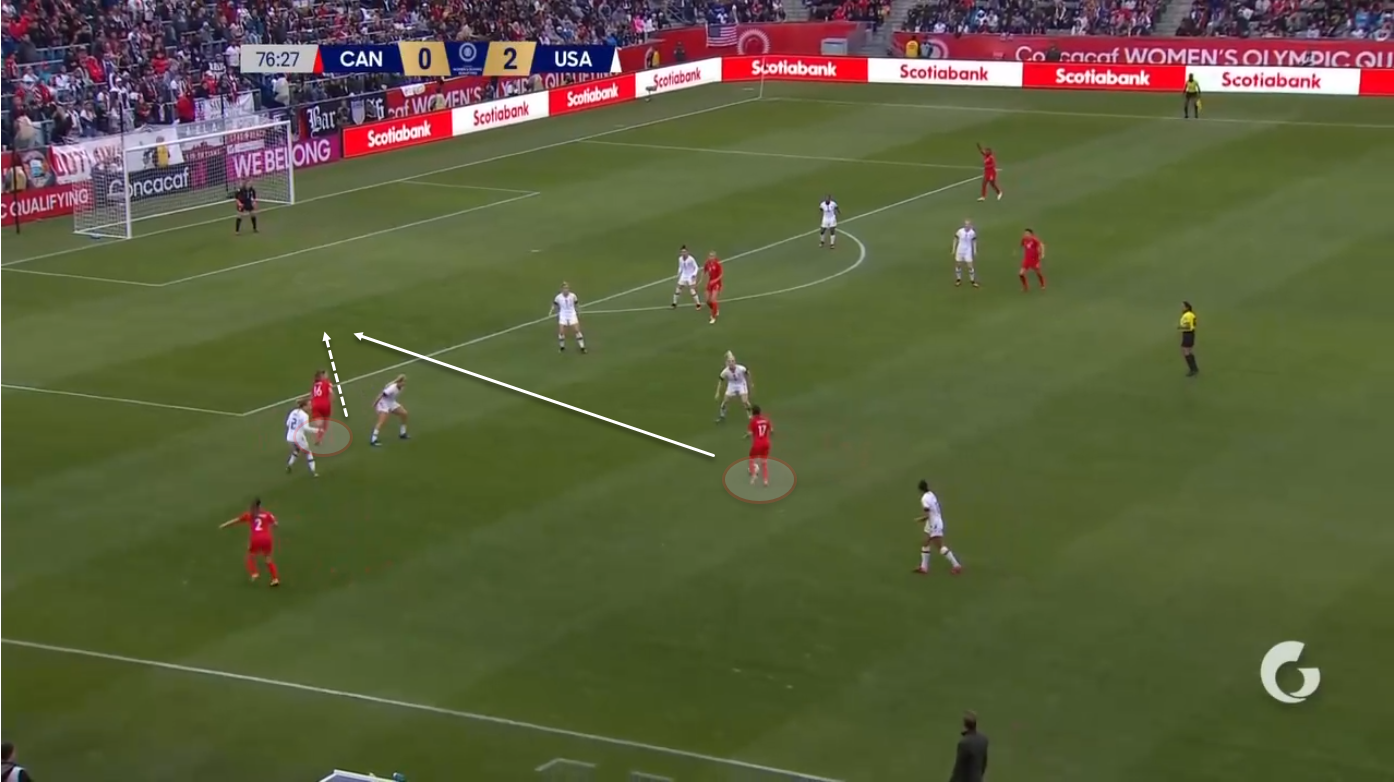 Here we see Fleming taking up possession in the half space for Canada against the United States Women’s National Team, where she is assessing her options. The American defence is holding a good line but her quick decision-making sees her spot a gap between the defence for the #16 to run onto breaking their shape. She also does this before Julie Ertz is able to close her down which makes her a very press resistant midfielder. Fleming isn’t afraid to take possession in contentious areas of the pitch and is always looking to progress the ball forward.

Below is another example of her exquisite passing range and thinking in attacking situations. Here she picks up possession in a more central area against a compact low block side. Though she is positioned slightly deeper than in the previous example, Fleming quickly sees an opportunity to play a pass down the flanks. She threads the ball through piercing the opposition defensive line which sets up a cross. 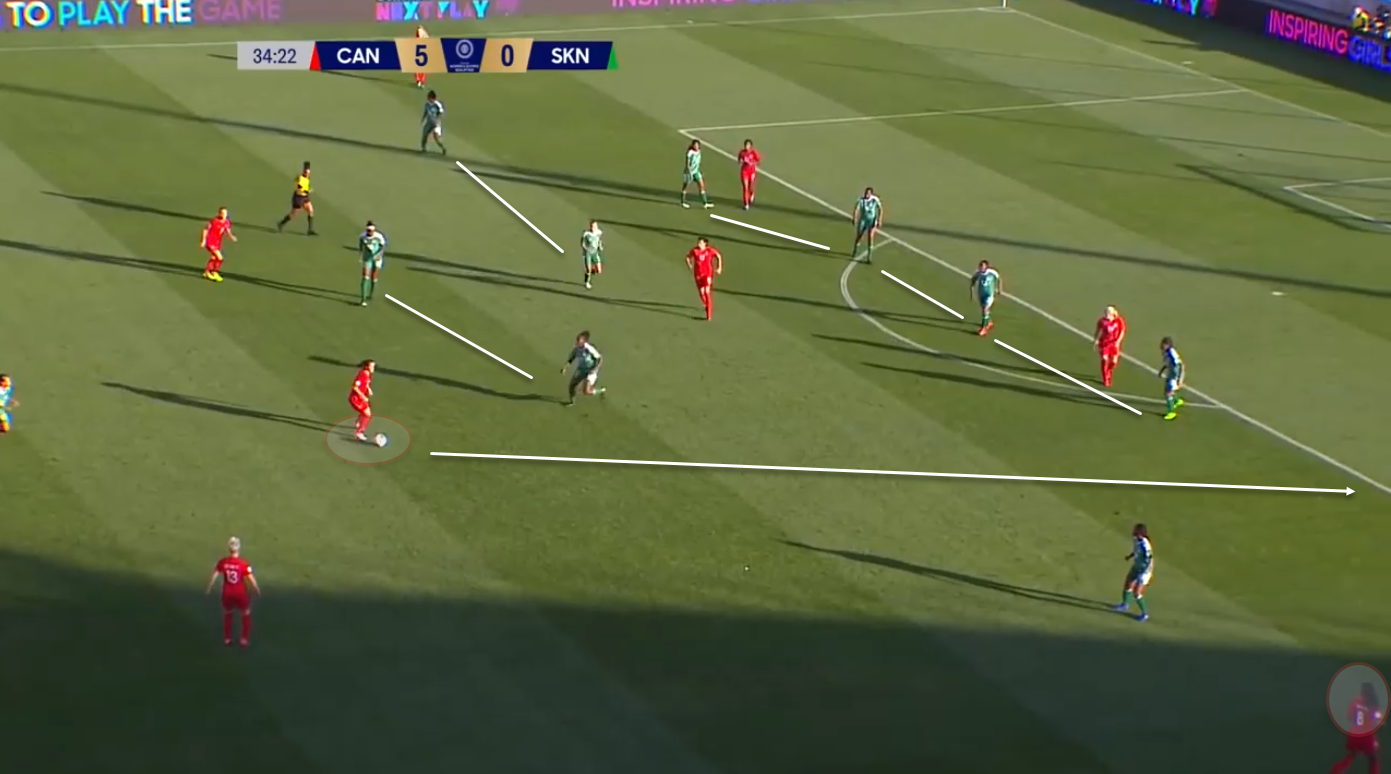 Another one of Fleming’s strengths is her ability to carry the ball from midfield to attack. Her ability to pick up possession and glide through players makes her a valuable ball carrier and one who can help progress the ball forward.

She receives the ball very softly at her feet with an excellent first touch which enables her to choose her next move with more time. Due to her impressive touches, she is Fleming can dribble out of tight situations and get her team a good few yards closer to goal and find a forward pass. Fleming’s movement and touch are reminiscent of Tottenham Hotpurs’ Tanguy Ndombele who is adept at moving the ball in tight situations 10-15 yards in a forward direction. This is something that Fleming does very well.

Notably, she averages 4.35 dribbles per 90 minutes (47% success rate) and 10.58 offensive duels per 90 minutes which suggests that she’s frequent in protecting the ball from defenders. A close to 40% success rate is by no means poor given her stature and size and will only grow to improve this figure as she gains more experience. 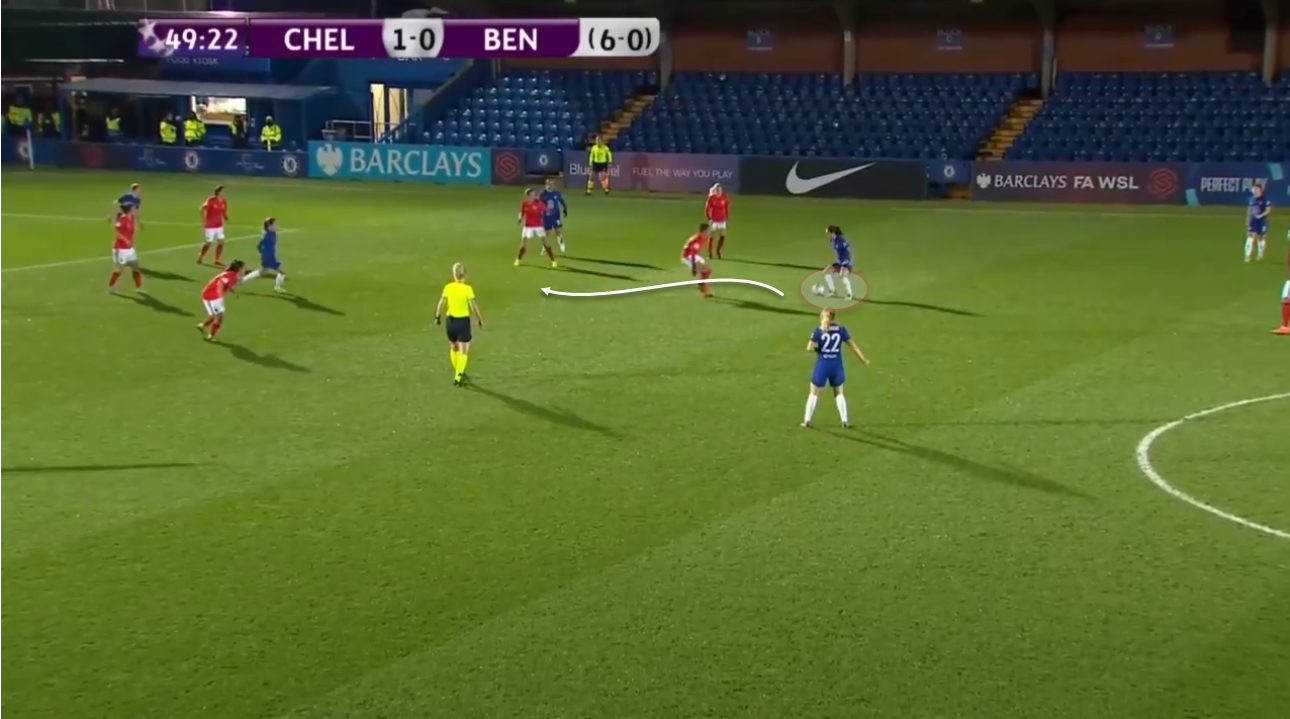 Here you can see Fleming receive possession in the half space with a number of Benfica players looking to close down the space. She’s in a good position but needs to progress the ball forward to get Chelsea into a more promising position. Her initial movement is to get the ball past the immediate player and does so with a great touch. 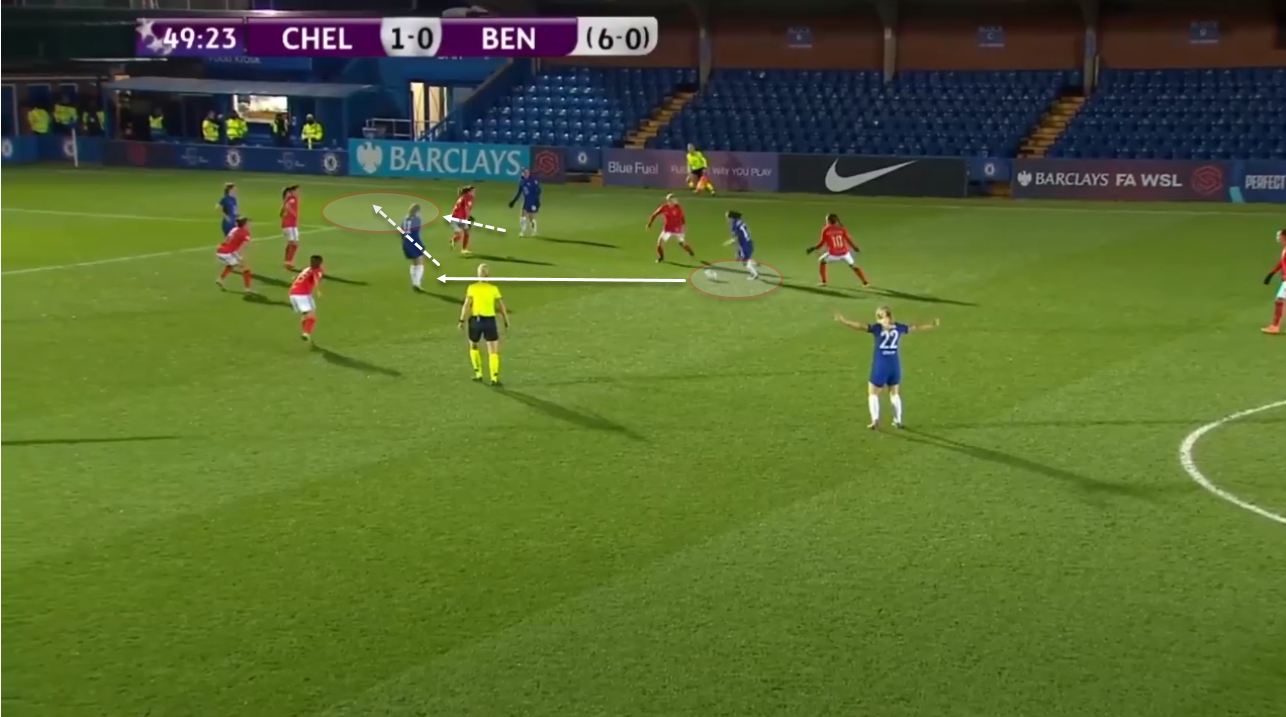 The next move is to making a pass to Guro Reiten who subsequently plays a lofted pass out wide to Kerr. This sequence of play might seem simple, however, it is Fleming’s ability to make these small progressive movements that can put her teams in a better attacking position.

Fleming has shown good off the ball awareness and is extremely active. She has displayed an energy that is associated with an all-action midfielder who is capable of participating in active pressing tactics. Throughout the analysis, we’ve seen how Fleming’s capabilities on the ball can contribute to a team’s success but her off the ball movements actually enable her to move into good positions.

She is strong and aggressive when engaging in defensive duels. The Chelsea midfielder has this ability to be a nuisance will constantly press a midfielder until a pass is made or the player is dispossessed. She wants to get as close as possible to the ball receiver to limit the time the attacker has to make a decision. What’s incredibly apparent is her willingness to actively press and close down as much as possible.

Fleming engages in 8.11 defensive duels per 90 minutes with a 70% success rate which suggests she is a very capable defender from the front and makes her suitable in both a two and three-man midfield setup. 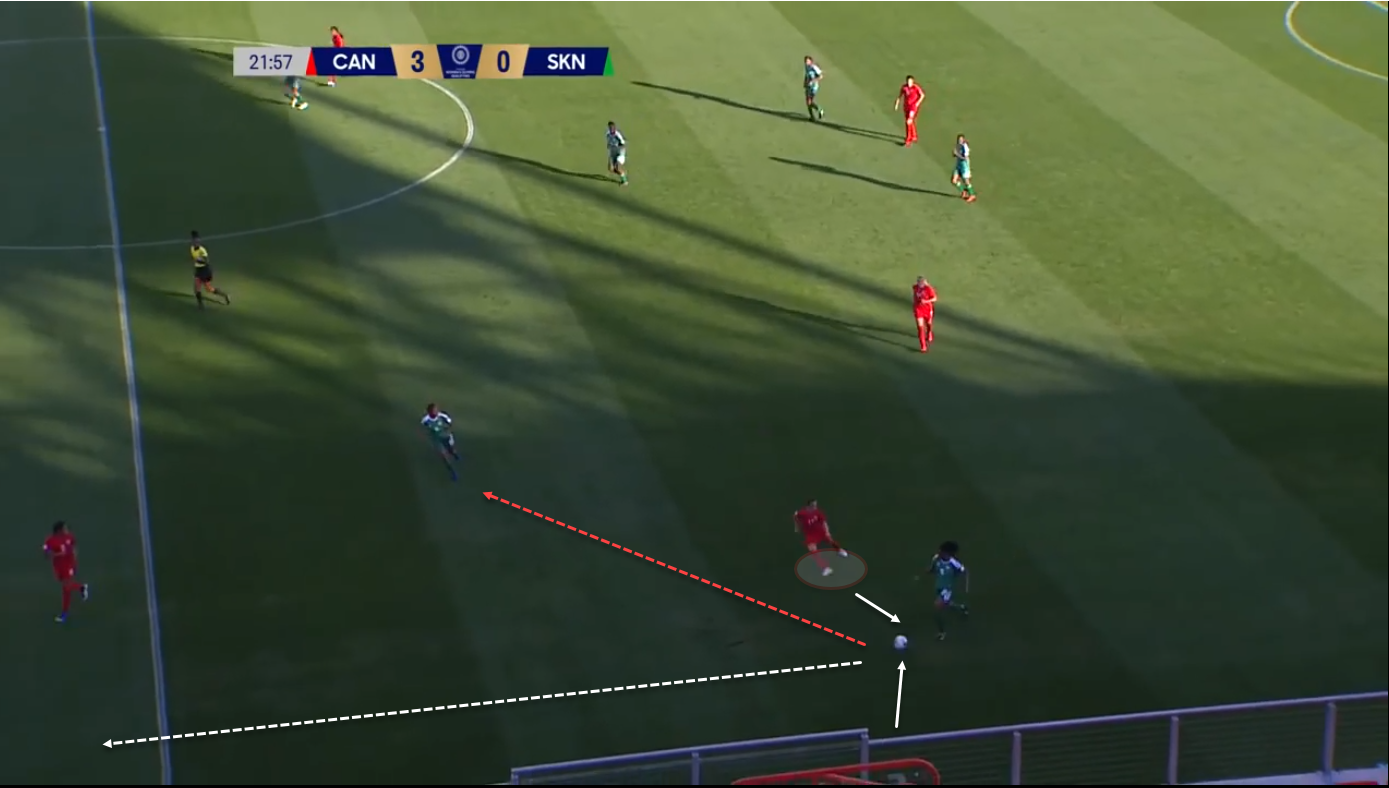 Here you can see Fleming going in to close down the ball carrier and limit the space and time she has to pass forward. She recognises that the player has limited options and will have to either play it long down the flank or move into the interior channel. In either scenario, Fleming has this covered and coming in at speed means there is a higher chance of success. Using the touchline as an extra defender is smart on Fleming’s part and shows her tactical intelligence in defending situations. 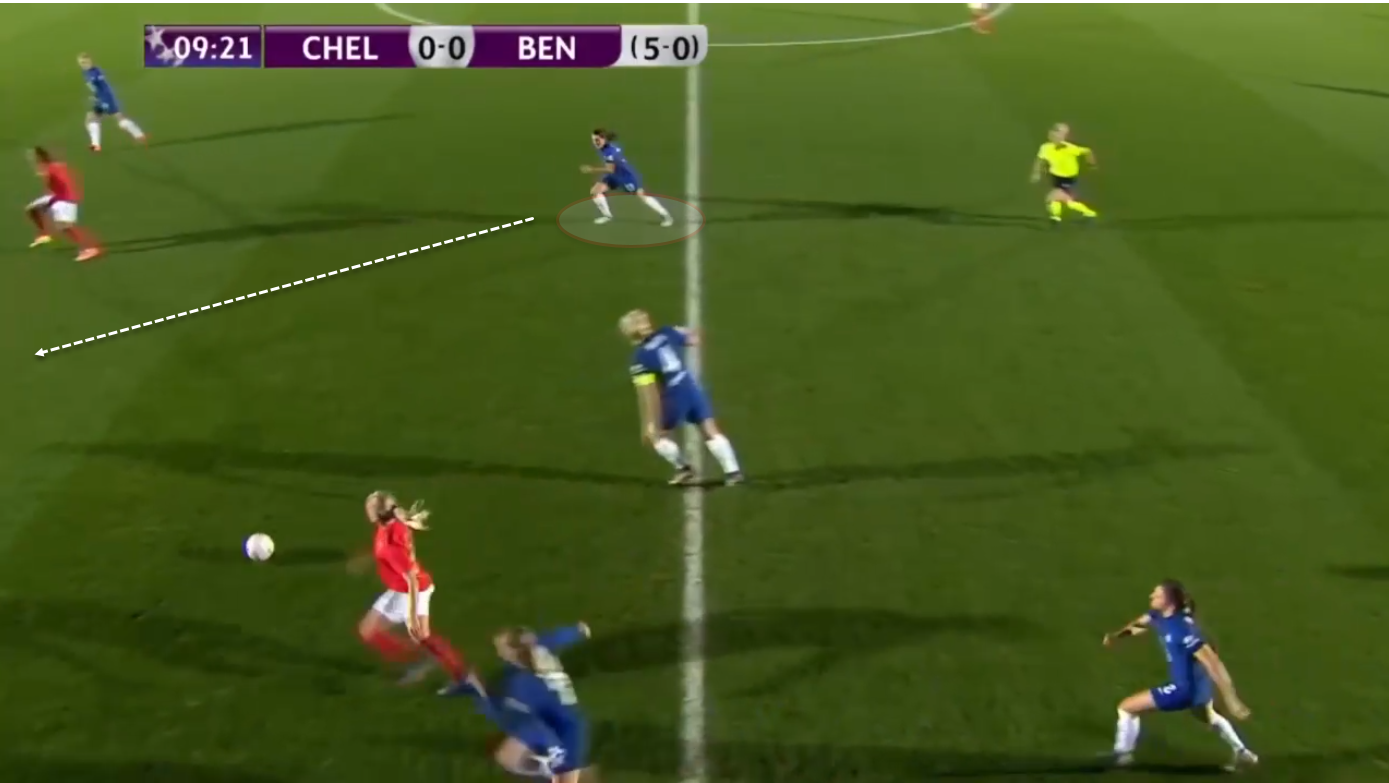 She covers the ground incredibly quickly and puts herself in a position to engage and win the ball. Another example can be seen here where Fleming sees Benfica playing a pass beyond centre-back Millie Bright. From here she wants to attack the space and intended receiver providing support in the defensive third. 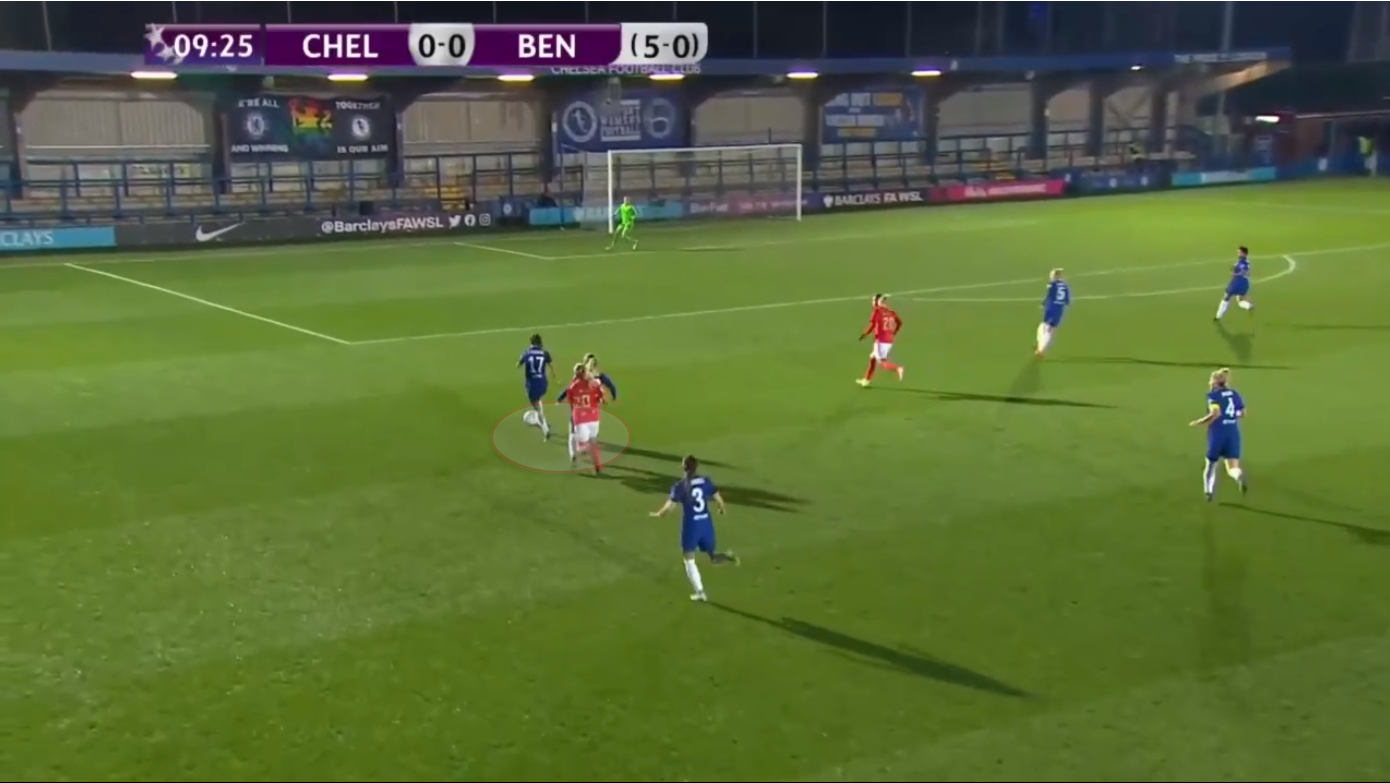 Fleming ends up winning back possession but most importantly showcased an eagerness to track back and help out here defenders. This sort of personality and quality is one that will please her coaches and exuberates a strong work-ethic and foundation which bodes well for the future.

Overall, this tactical analysis has shown us that Chelsea Women have an incredibly talented and bright young central midfielder. Jessie Fleming is an all-action playmaking midfielder who do both sides of the game well. A creative and hard-working midfielder who has a keen eye for a pass but also a willingness to defend.

Moving to a big club like Chelsea is a challenge for most players let alone a youngster. However, the increasing quality of the FAWSL and the need for squad depth, Fleming will be used more than she might think considering the addition of the UEFA Women’s Champions League for Chelsea this season. The current season is likely to be a year of development but there is no doubt that Fleming will continue to impress and become a mainstay in Chelsea’s midfield for years to come.