After Liverpool dominated last season, this Premier League season has brought us suspense after many surprising results. Just by looking at the table we can see that the difference between 1st and 10th place is only 7 points which makes us look forward to the denouement in the second part of the season. This data analysis will show us which teams overperformed and which teams underperformed. Through analysis, we will also evaluate teams’ style of play based on data.

The first graph we will analyze consists of created metrics called defensive and offensive performance. Both metrics are in percentages and they represent the team variance between xG and goals. 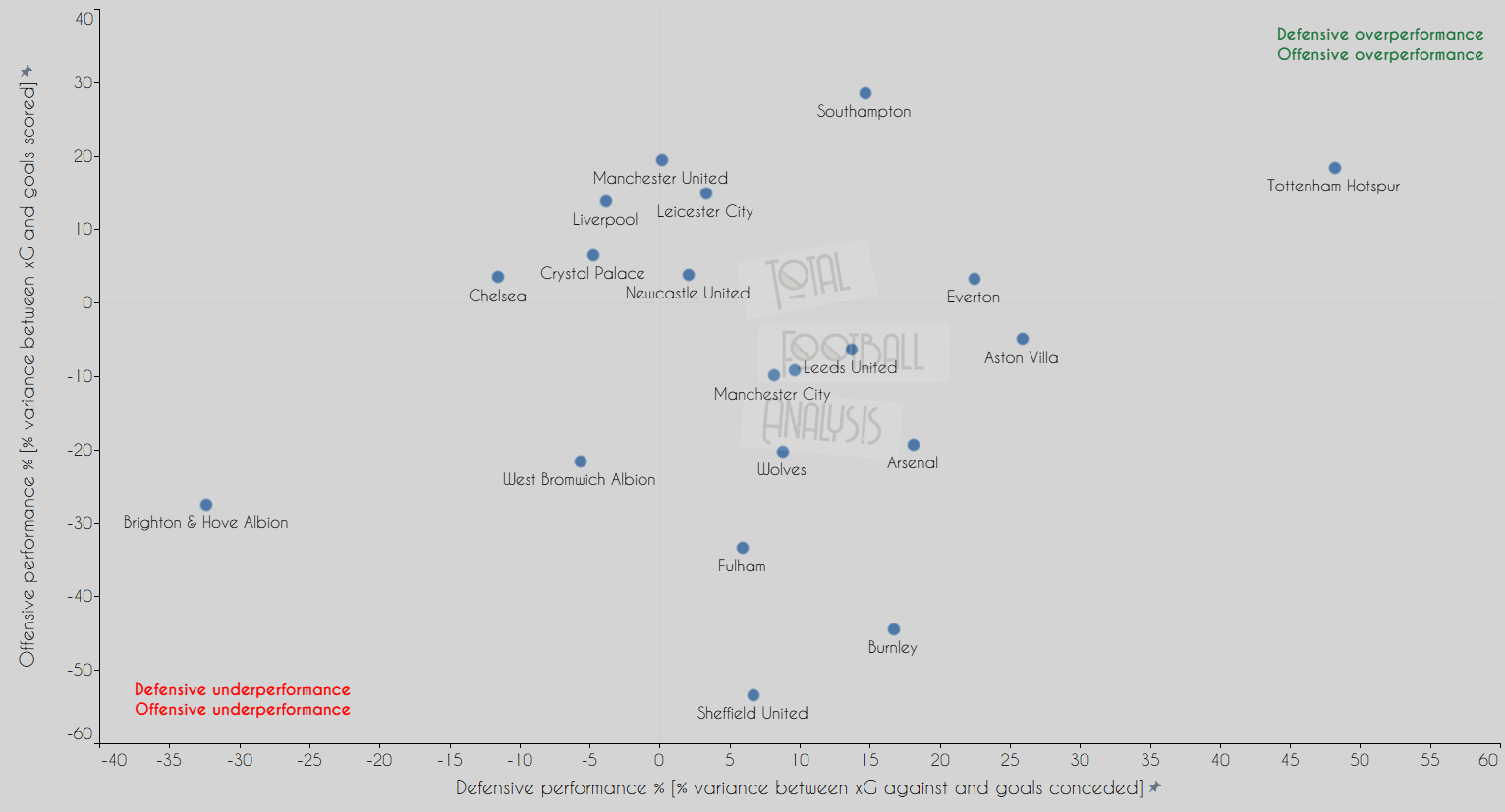 It is not surprising to see Tottenham as the biggest outperformer in the league. Mourinho’s tactics and their individual player quality, especially of the Son-Kane duo has led to their position on the table. However, it is worrying, aside from results, to see such a quality squad looking to score early and defend for the rest of the match. That tactic has backfired a few times this season against teams they should beat, but those matches ended as draws with Tottenham conceding late goals after defending for the better part of the game. The biggest offensive overperformer is Southampton. It could be connected to three free-kicks scored by James Ward-Prowse and a few surprising finishes from Danny Ings. They are really working hard for their luck because they are overperforming in defence as well with heroic defending by Jannik Vestergaard, Jan Bednarek and Alex McCarthy. Manchester United, Liverpool and Leicester are the other three teams that are overperforming on offensive metrics. The biggest underperformer is of course Brighton. There has been a lot of talk lately about Brighton’s underperforming season – they defend well and attack well, but low-quality finishing and bad goalkeeping have led to this situation. Other teams that have underperformed largely in the attack are last placed Sheffield United, Burnley and Fulham. 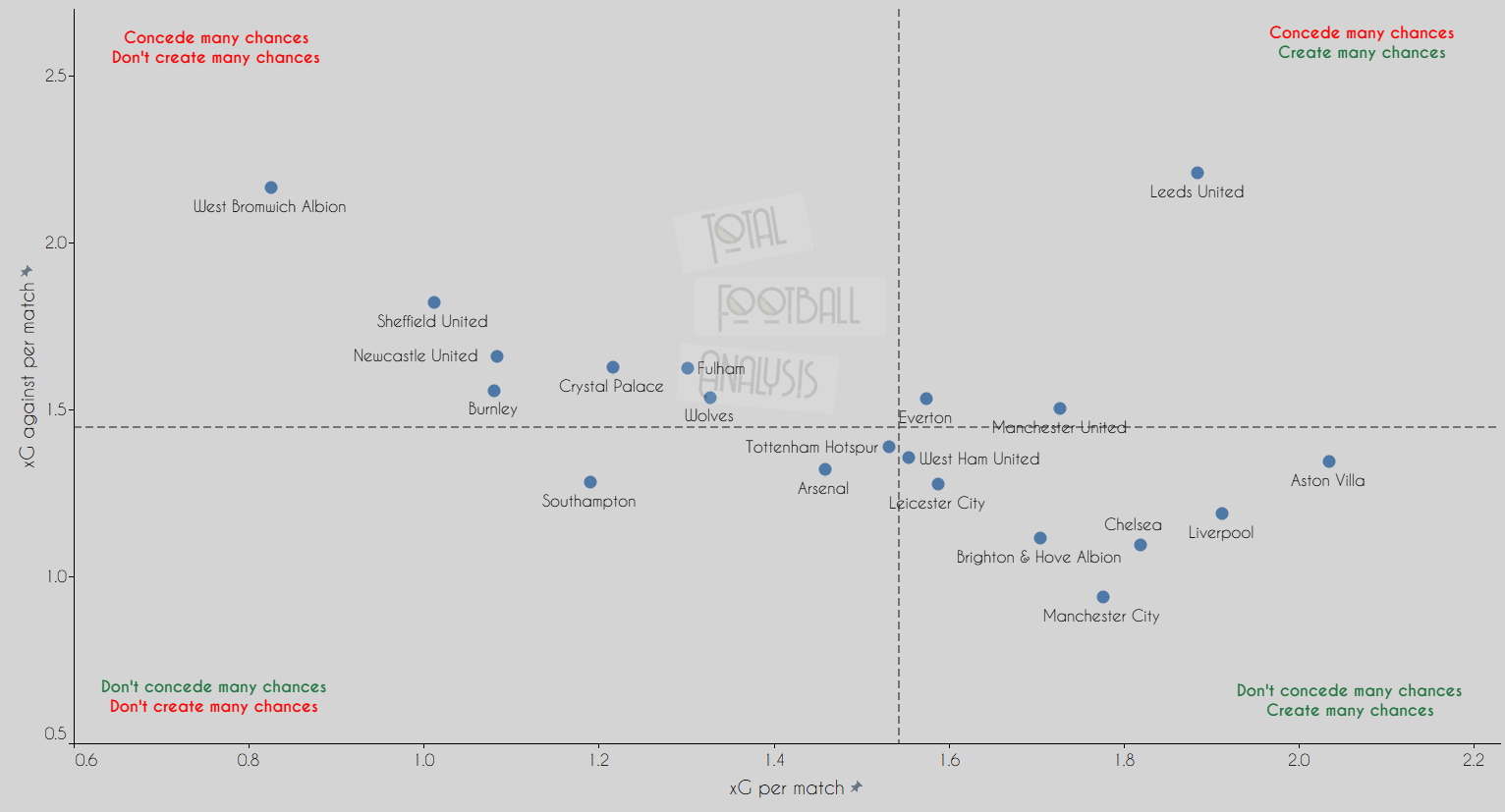 Two teams are eye-catching in this graph: Leeds and Brighton. Leeds is the team that creates the 3rd most xG per match, but also concedes the most xG against per match. That is the reason why Leeds matches are the most entertaining to watch this season for neutral fans, because they play matches with many chances being created for both sides. Aston Villa and Brighton are in the company of league giants Manchester City, Chelsea and Liverpool as the teams that create many quality xG chances and don’t allow many quality chances for their opponents. Now we have another perspective into Brighton’s underperformance because they are close to the top teams based on expected goals model. The worst team in the league based on the expected goals model is West Brom and they are followed by Sheffield United. Both teams will have a tough time to avoid relegation based on their performances so far.

In this section, we will take a detailed look into the teams’ shooting and passing tendencies, while also analysing how dangerous they are from set-pieces. First we will take a look how often teams shoot and what is their average shooting distance. 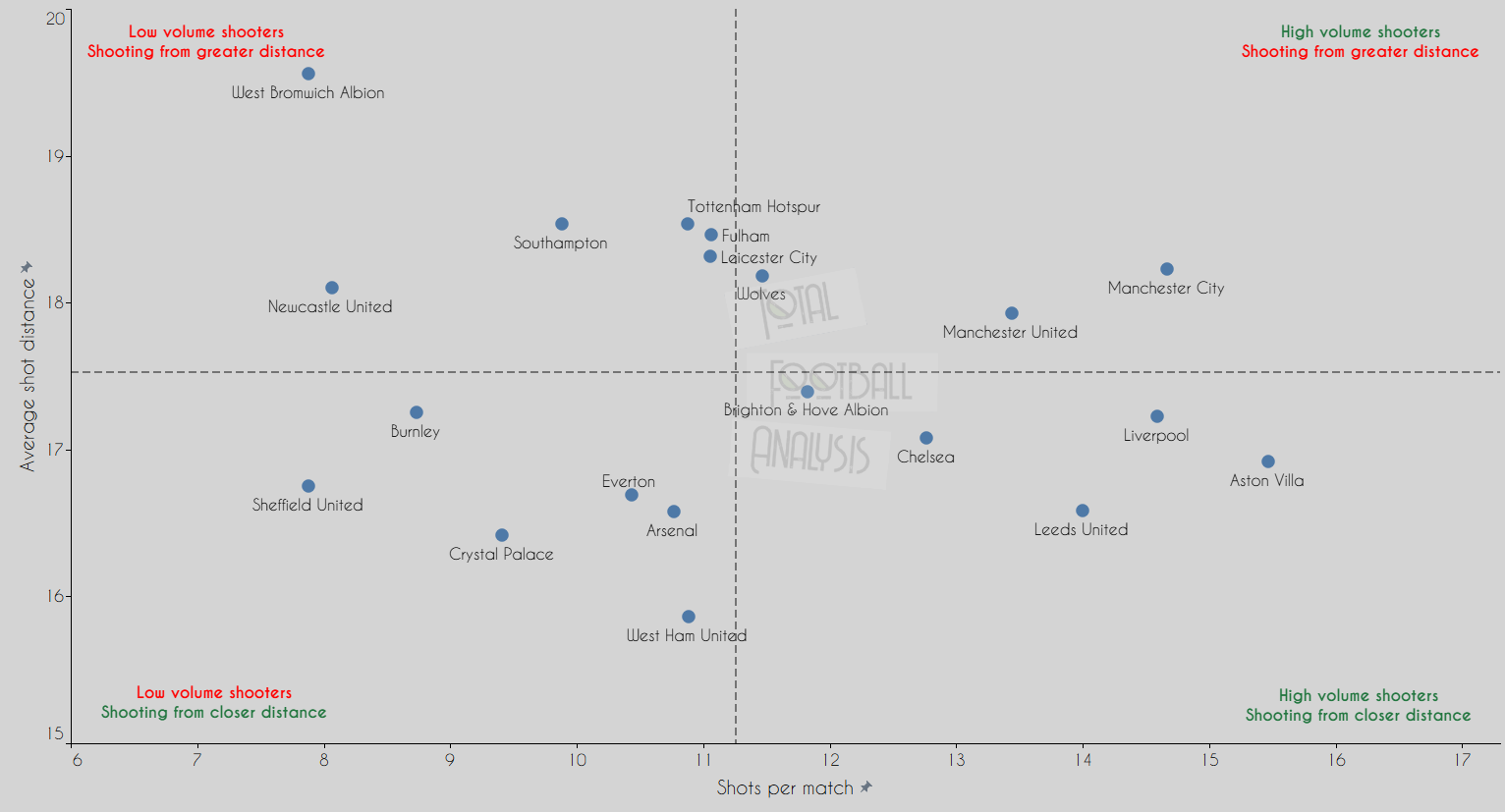 We can see some teams on unexpected positions on the graph. The first surprise is that both Manchester clubs are shooting from a greater distance than the league average, however they shoot more often which could affect the distance. Aston Villa make the most out of their direct football, as they have the highest number of shots per match and are also shooting from closer distances. Tottenham and Southampton are in poor positions on the graph, which is connected to their offensive outperformance, because only West Brom shoot from greater average distances than them. On the other side West Ham shoots from the closest average distance in the league and they are the only team that shoots from an average distance of less than 16 metres. 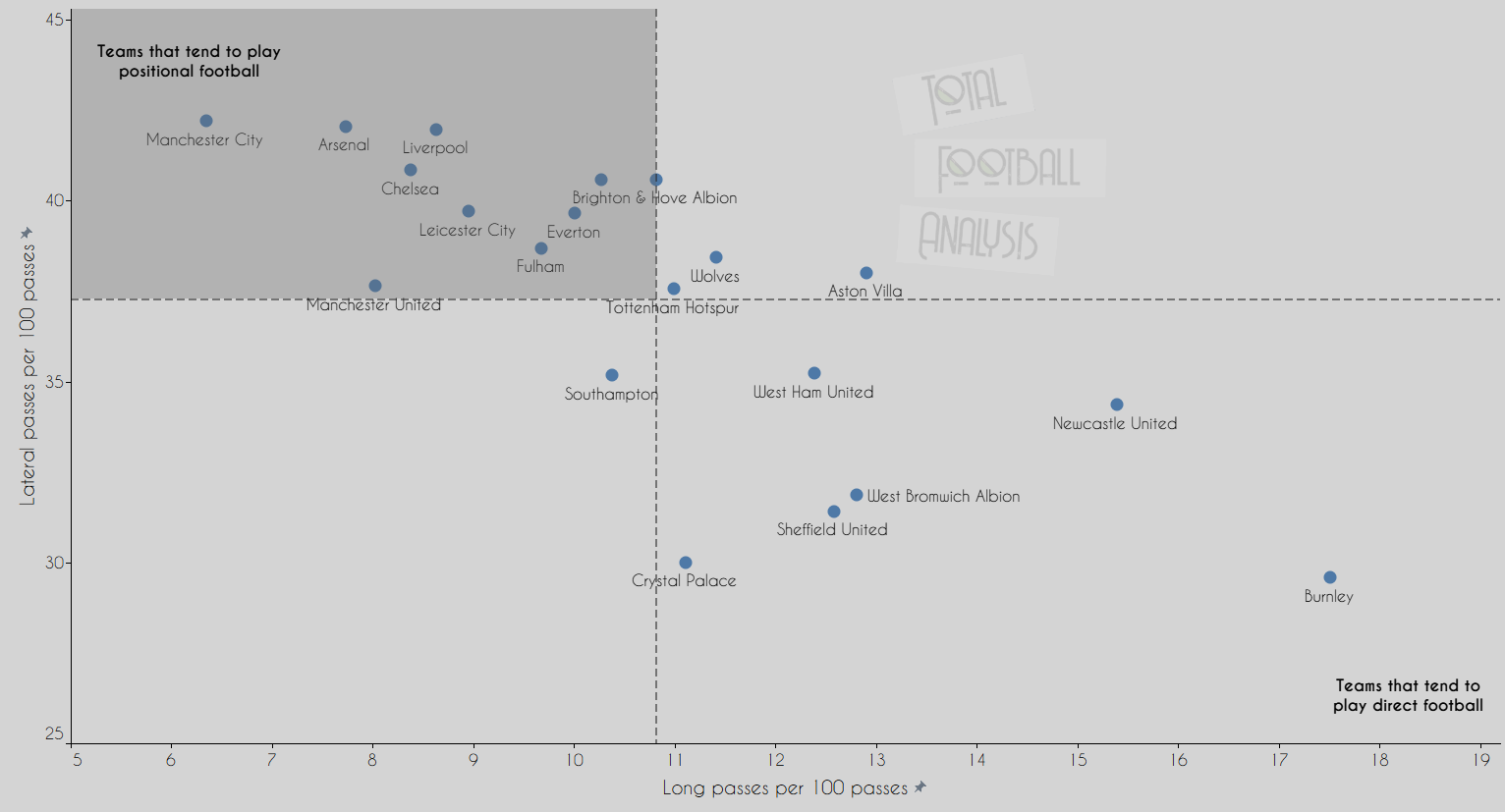 It is not surprising to see Manchester City as the most positional team in the league, followed by Arsenal, Liverpool and Chelsea. Burnley are the most direct team; they often tend to start attacks by attempting a long ball towards their strikers. We can see that Wolves, Tottenham and Aston Villa are playing similar styles, which can be interpreted as patient counter-attacking football – they don’t rush to be direct but they know when is the time to attempt long balls and start direct attacks.

The last graph in this section will show us how dangerous teams are from set-pieces. 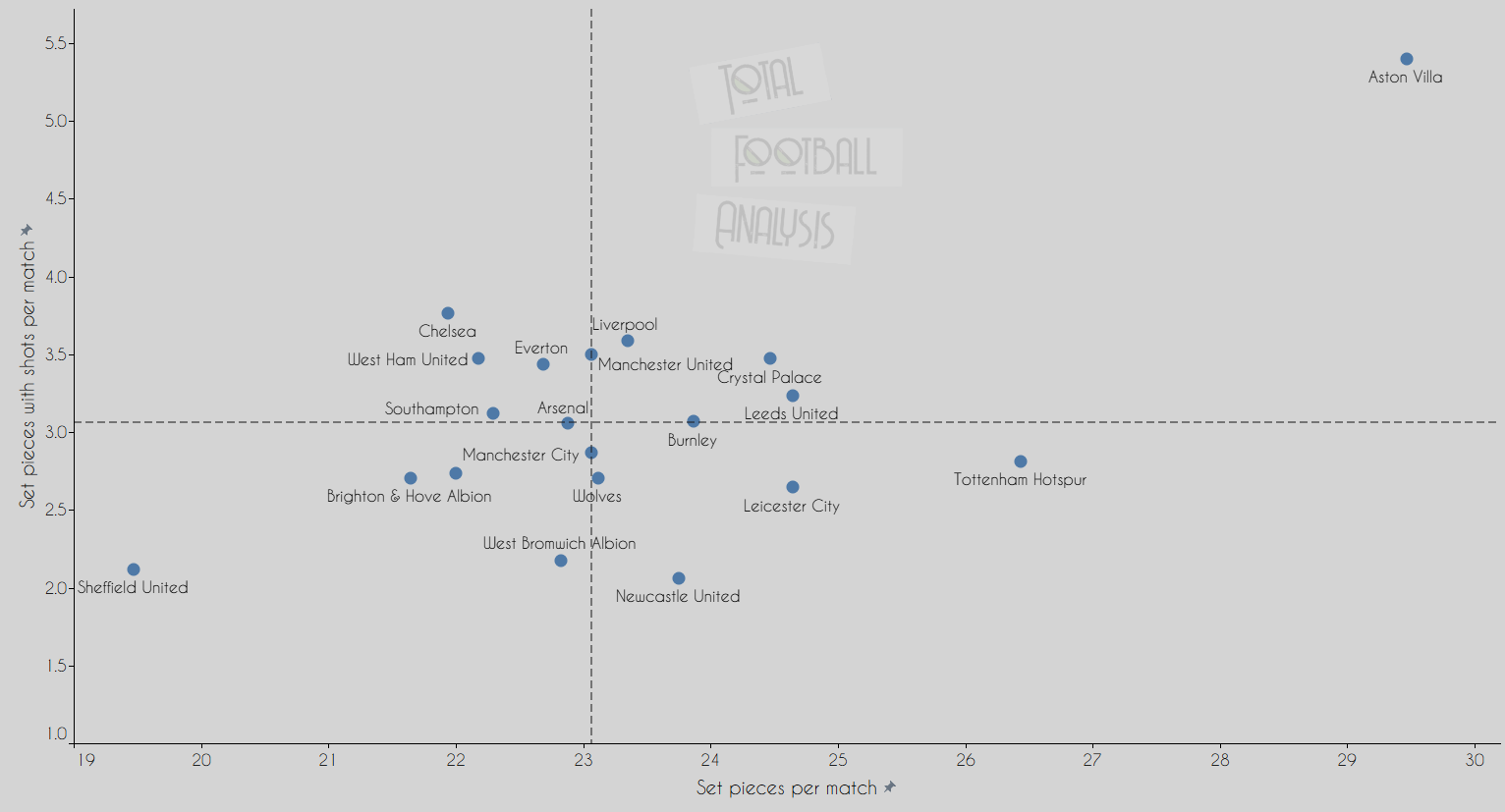 Most of the teams get between 21 and 27 set-pieces per match and 2 and 4 set-pieces with shots per match. The biggest anomaly and we can say the most dangerous team from set-pieces is Aston Villa. The reason for most set-pieces in dangerous positions is because their captain Jack Grealish is the most fouled player in the league. Their centre-backs Tyrone Mings and Ezri Konsa are aerial threat from offensive set-pieces and they add a lot to their shots after set-pieces per match. Chelsea can be labelled as the second most dangerous team and even though they attempt just below 4 set-piece shots per match, they have 8 set-pieces less than Aston Villa per game. Hakim Ziyech and Ben Chilwell are advanced crossers of the ball, while Kurt Zouma is the biggest threat in the air having scored four goals from such situations already.

In the last section, we will take a look into success in duels for teams,  as well as their tendency to press higher and actively trying to regain possession. The graph below shows how successful teams are in terms of defensive duels and aerial duels. 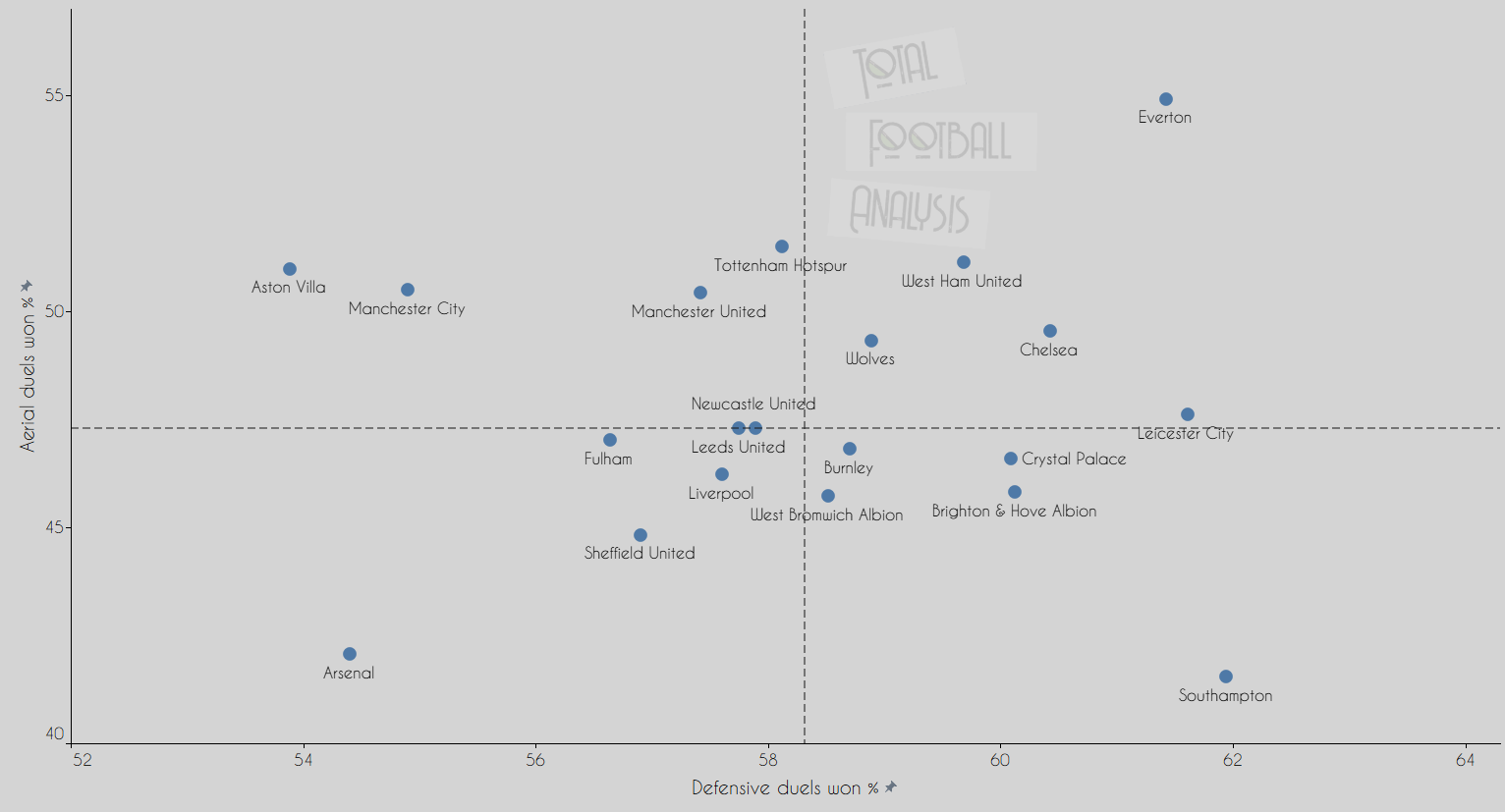 The best overall team on the graph is Everton. They are the most dominant team in the air which is not a surprise because they have aerially strong players like Yerry Mina, Michael Keane and Dominic Calvert-Lewin. On the other hand the worst team overall in this graph is Arsenal. It is clear this season that Arsenal lack sharpness on the field and except their centre-backs they have not had a strong aerial presence since Olivier Giroud left. Southampton are the worst team in the air, but are the strongest team in terms of defensive duels won. Liverpool are below average in both metrics and even though they lost Van Dijk who is a vital part of their duel dominance it is a little surprising that they are one of the four teams that is below average in both metrics.  It is important to understand that even though these values are different by just a few percentage points between teams, but when you count all the players on the field even getting your team to improve 1% in duels would make an impact. That 1% could mean you won’t make late tackles which end as foul, but will end with regained possession. 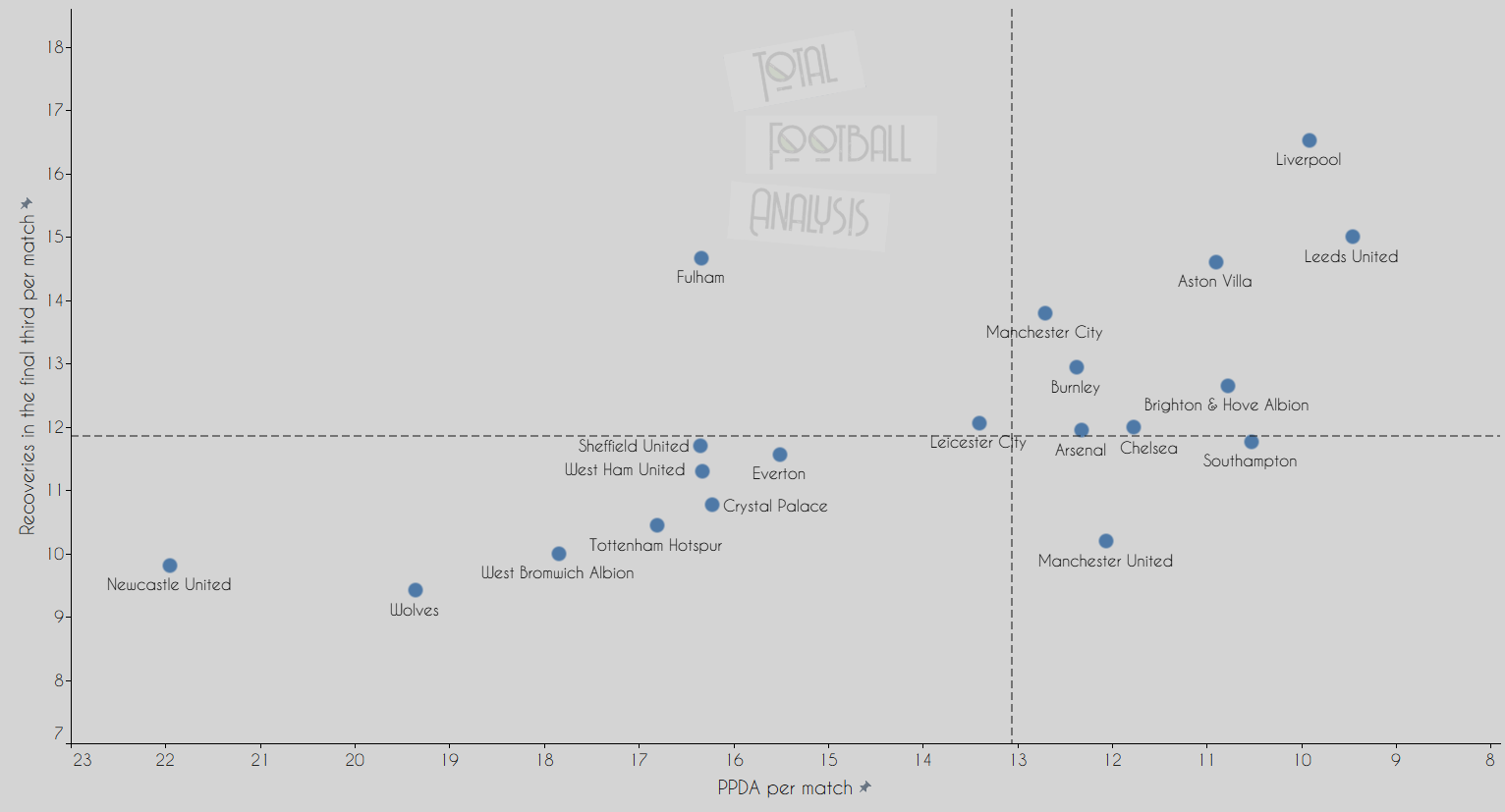 In this graph we can see teams’ PPDA per match (passes allowed per defensive action) and recoveries in the final third per match. Most people would expect that Liverpool and Leeds are above average in both metrics. Both teams look to press higher and allow their opponent less time on the ball which often leads to mistakes from opponents in their own third. Aston Villa, Brighton, Manchester City and unexpectedly Burnley are the teams that are above average in both metrics. Opposite to them are Newcastle, Wolves, West Brom and Tottenham. Those teams do not bother too much in terms of regaining possession quickly which instantly means they can rarely recover the ball in the final third. Fulham even though they don’t press often they are pretty successful when it comes to recoveries in the final third.

These statistics we have evaluated have led to insights about the Premier League teams and their performance so far this season. We saw how Brighton and Aston Villa look good from a data perspective, but on the field their efficiency differs a lot. Tottenham has results, but they look average based on data. Mourinho’s team will be hard to beat in derby matches, but it is questionable as to whether their playing style is sustainable over a long period, especially against “smaller” opponents. It will be interesting to see if West Brom and Sheffield United make some moves this transfer window to strengthen in order to try and avoid relegation after bad performances in the first half of the season. Arsenal and Liverpool will have to find a solution for their below-average performance in duels which could give them a boost in the second half of the season.