On the 23rd February 2020, it was announced that the Moroccan international Hakim Ziyech had agreed to a deal to leave Ajax and join Chelsea. That this move was announced without incessant media speculation was indicative of the player. Whilst on the pitch Ziyech is a creative force he is a team player off of it. Even when he moved to Ajax, following the relegation and financial issues faced by his previous club FC Twente, Ziyech had not agitated for the move and the Twente fans loved him for it.

The purpose of this tactical analysis is to, first of all, understand exactly what kind of player Hakim Ziyech is before identifying three potential replacements that Ajax could turn to. We will examine one player who is already at the club, one who is based in Holland, and one from elsewhere in Europe.

This season we had seen Ziyech play mostly from the right of the three-man attack. He is naturally left-footed and this lends itself to Ziyech coming inside when in possession of the ball. He has a passing range that allows him to access all areas of the field from the right-side and his diagonal passes often create goalscoring opportunities. It is interesting to consult data when considering the output of a player of this type. This allows us to get a better understanding of how they perform on the pitch. I have gathered data from the top five leagues and the Dutch top-flight looking at players with at least 1500 minutes and that have played across the midfield. 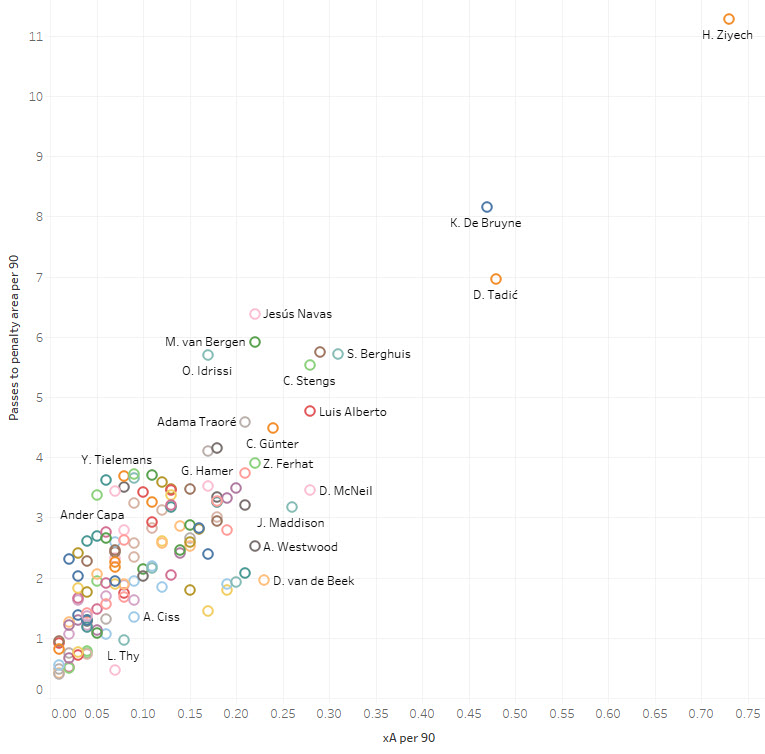 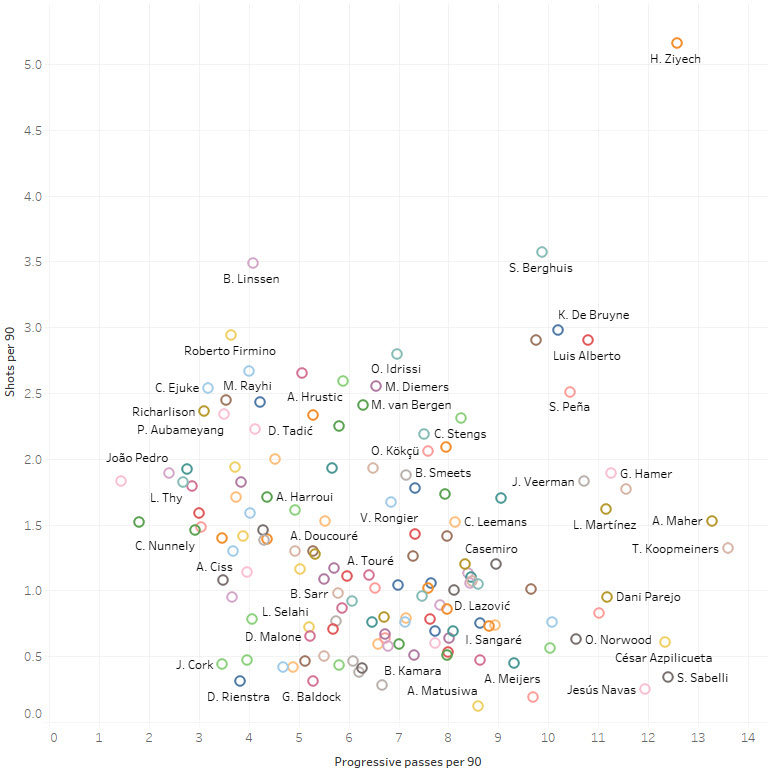 This time we are taking the same data set and examining the number of shots per 90 that a player takes and his progressive passes per 90 minutes. Once again we can clearly see that Ziyech is a standout. He has a tendency to shoot from range once he has cut infield and he will often shoot from distance. This goes some way to explaining the fact that he is averaging over five shots per 90 minutes. 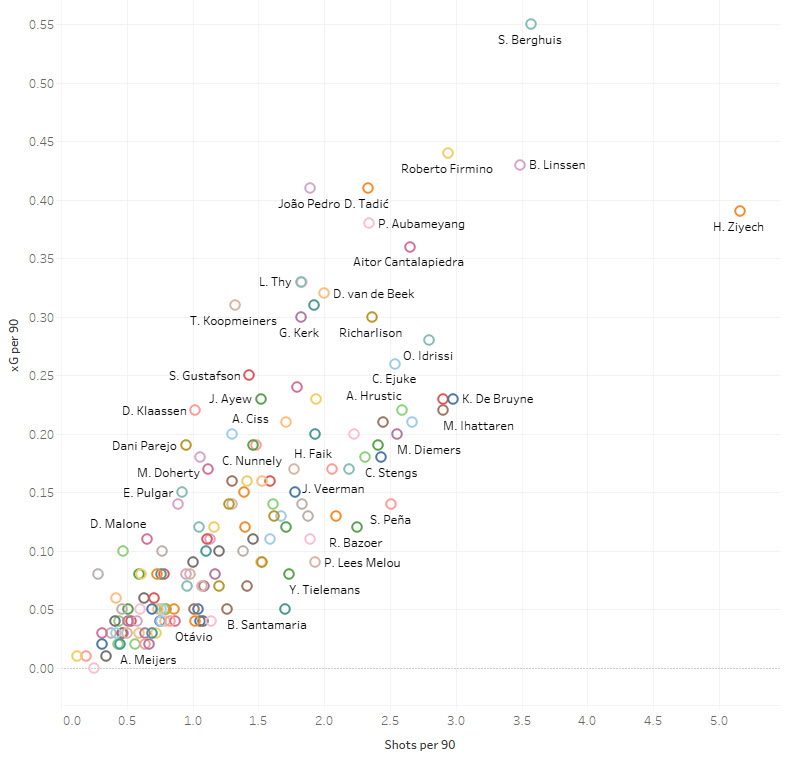 Finally, we are looking at shots per 90 minutes and expected goals per 90 minutes. Once again Ziyech impresses with his amount of shots at goal but those shots also carry a genuine threat as he has just under 0.40 xG per match.

If we put all of that together then we can build a fuller picture of the profile that Ziyech presents and this, in turn, shows us what Ajax will have to try to replace. Ziyech is a progressive passer who creates chances for his teammates but he is also a volume shooter who carries a genuine threat from range. In short, Ziyech is a key player in the Ajax attacking game model. He will be a genuine loss for the team.

Abdulkadir Omur – the replacement from abroad

The first of the players that I would recommend as a potential replacement for Ziyech is Abdulkadir Omur of Trabzonspor and Turkey. The 20-year-old attacking midfielder has been labelled the Turkish Messi by some and that alone gives some insight into his playing style.

The first thing that we need to make clear is that to an extent the variances in output from player to player is partially down to the differences in playing style between various sides. Ajax are possession heavy and play on the attack a lot of the time. Trabzonspor, on the other hand, are a side who play in transition a lot of the time with less time on the ball for their attacking players.

One of the first things that stands out when watching Omur play is his ability to beat a man in dangerous areas before finding passes to teammates in advanced positions. 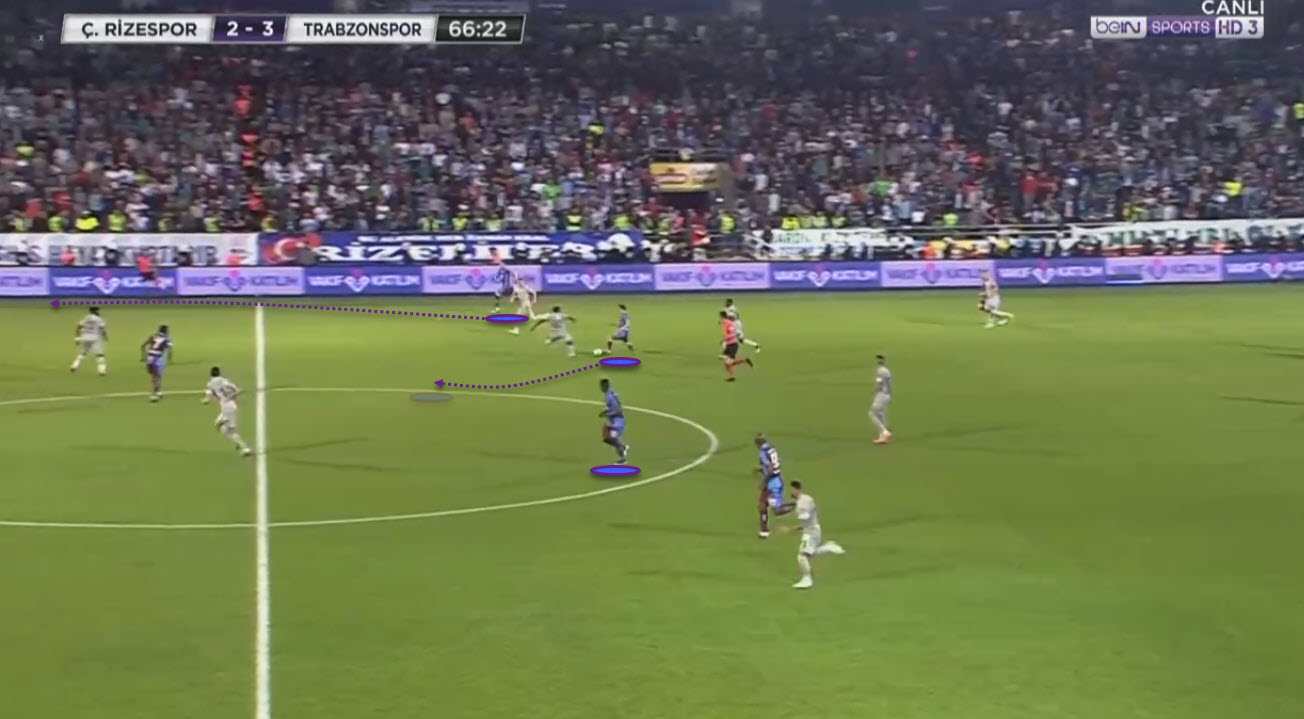 We see an example of this above as Omur picks up possession of the ball in the central areas. He beats a defensive player, as the defender commits himself, and then drives forward into a pocket of space. As he beats the midfielder there is a wide player who makes a forward run to stretch the play. Omur is intelligent enough to hold on to possession of the ball until another defender moves to engage him. He then plays a well-weighted pass out to the wide man before continuing his run to support the play centrally. 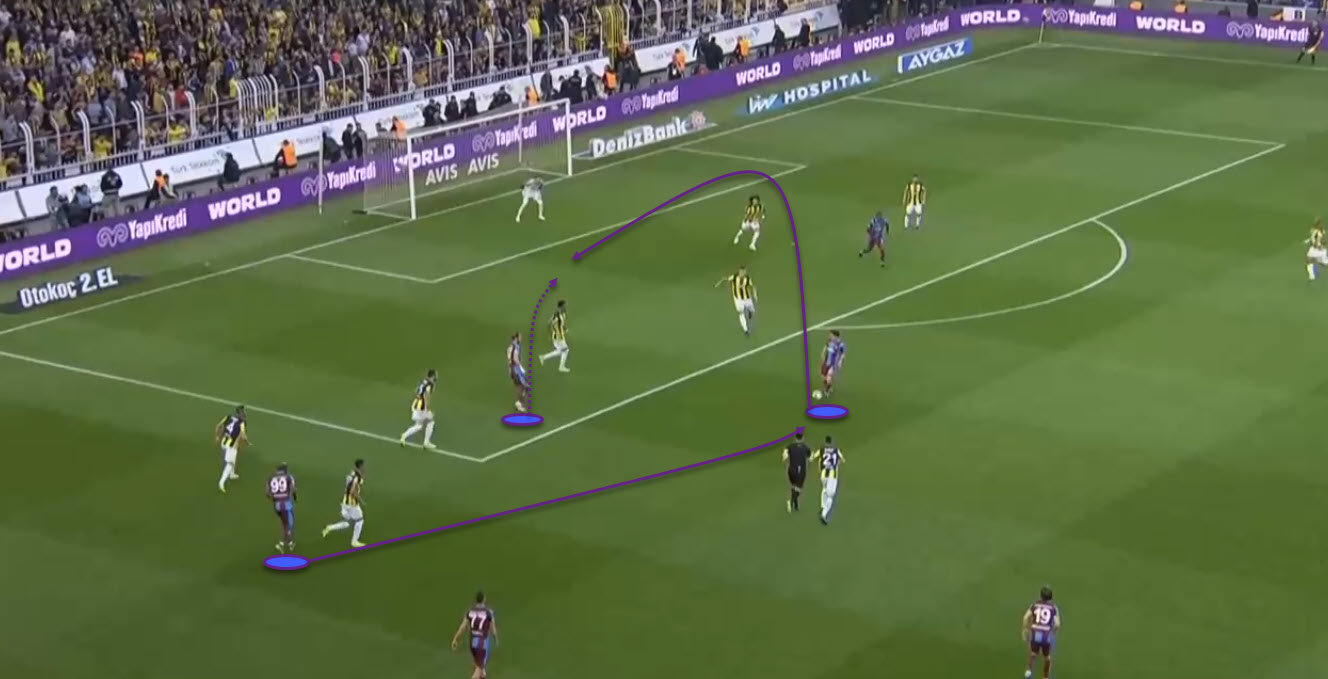 Omur is extremely creative around the penalty area and he consistently finds angles of passes that create chances for teammates. We see an example of this above as the ball is played into Omur from the wide area. He takes possession just outside the penalty area and calmly lifts the ball over the defensive line for the forward to take a shot at goal.

Omur plays either from the right-hand side or centrally and he stands out when taking up intelligent positions between the lines. He constantly looks to drift off of the shoulder of defensive players into areas that are difficult to defend. In the example above we see Omur receiving the ball in one of these pockets. Here he takes possession on his back foot and immediately turns to put pressure on the defensive line.

AZ Alkmaar have been one of the most impressive teams in Holland recently. Their willingness to blood and develop young players while favouring attacking football has caught the eye of many onlookers. One of their key players in the last two seasons has been their attacking midfielder Calvin Stengs. Like Hakim Ziyech the 21-year-old Stengs plays predominantly from the right side of a front three and like Ziyech he is also predominantly left-footed.

Stengs is an excellent progressor of the ball either when dribbling or playing forward into dangerous areas. His ability to drift past defensive players and then find passes into the penalty area is extremely reminiscent of Ziyech. 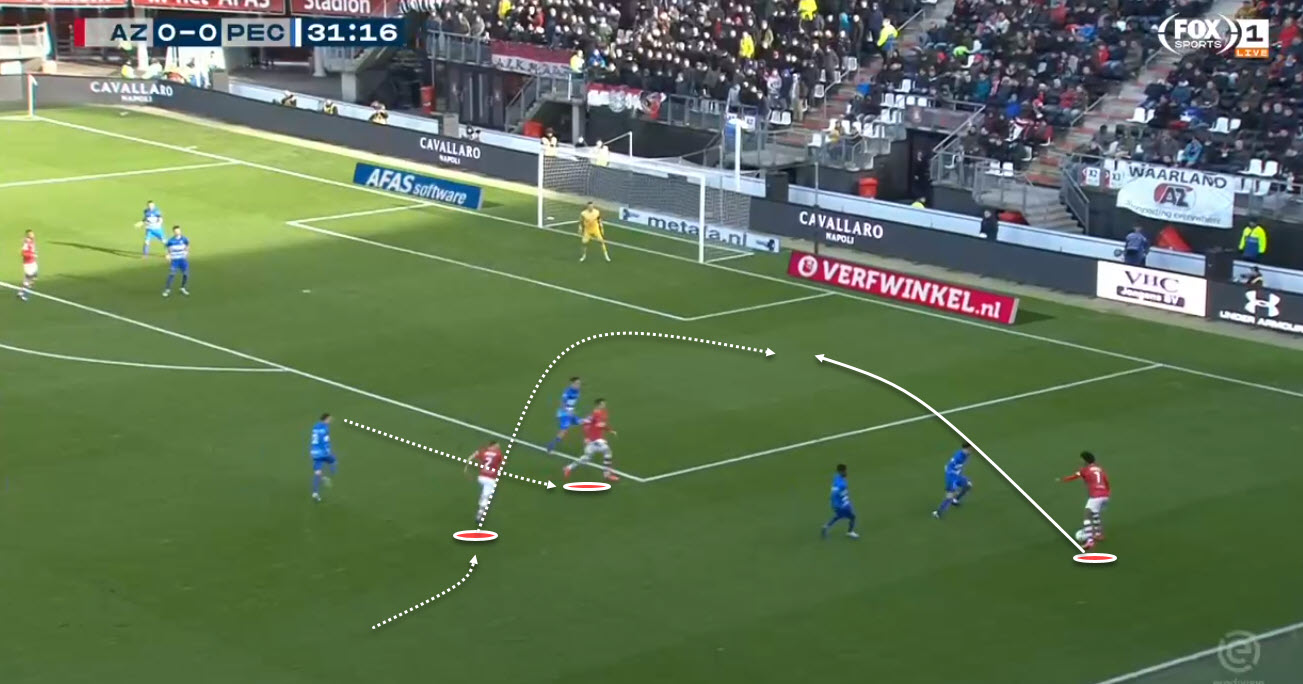 Stengs is a creative passer who finds angles to access the penalty area whenever the opportunity presents itself. In the example above we see Stengs in possession wide on the right with two defenders close by. One player is making a run towards the ball and this drags another defensive player out of position. The right-back is then able to make an inverted run into the penalty area. Stengs plays the ball around the corner with the outside of his left foot to find the run of the fullback. 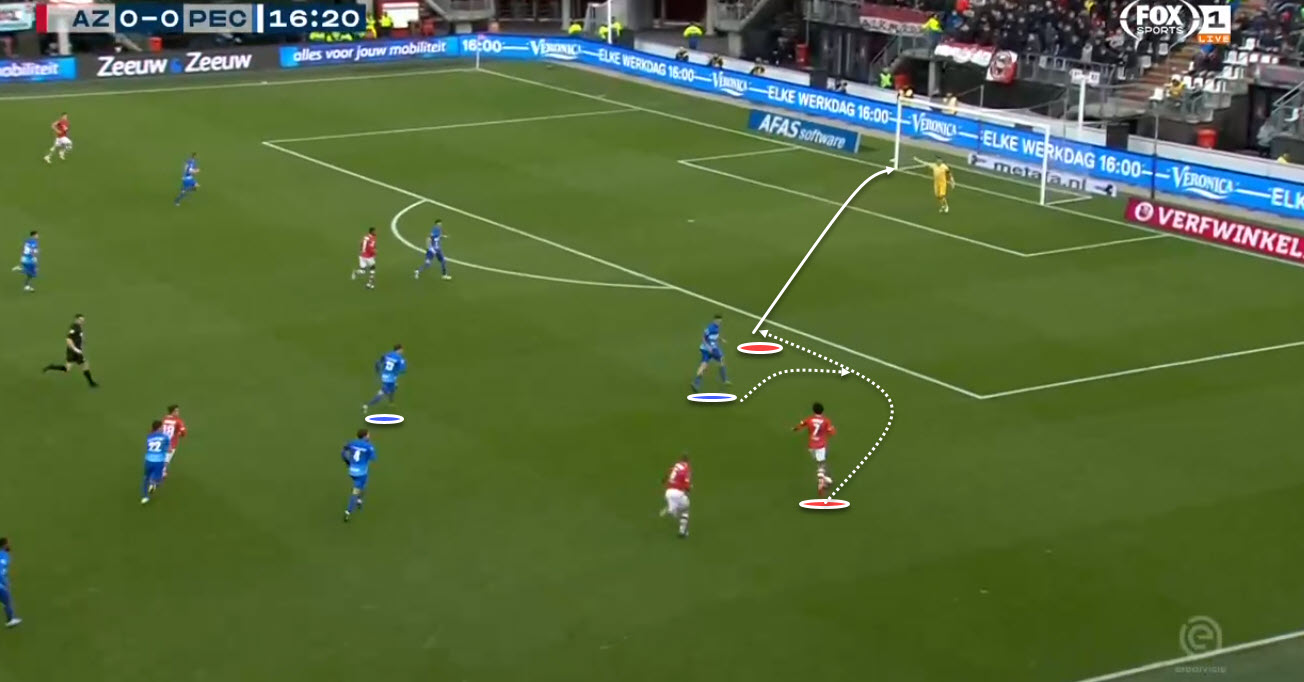 Stengs is also an effective dribbler with his ability to beat defensive players when going either outside or inside. We see an example of this here as Stengs takes possession with only one defender between him and the goal. As the defensive player moves across to challenge for the ball Stengs drifts away from him easily while cutting inside. He then curls the ball into the far post. 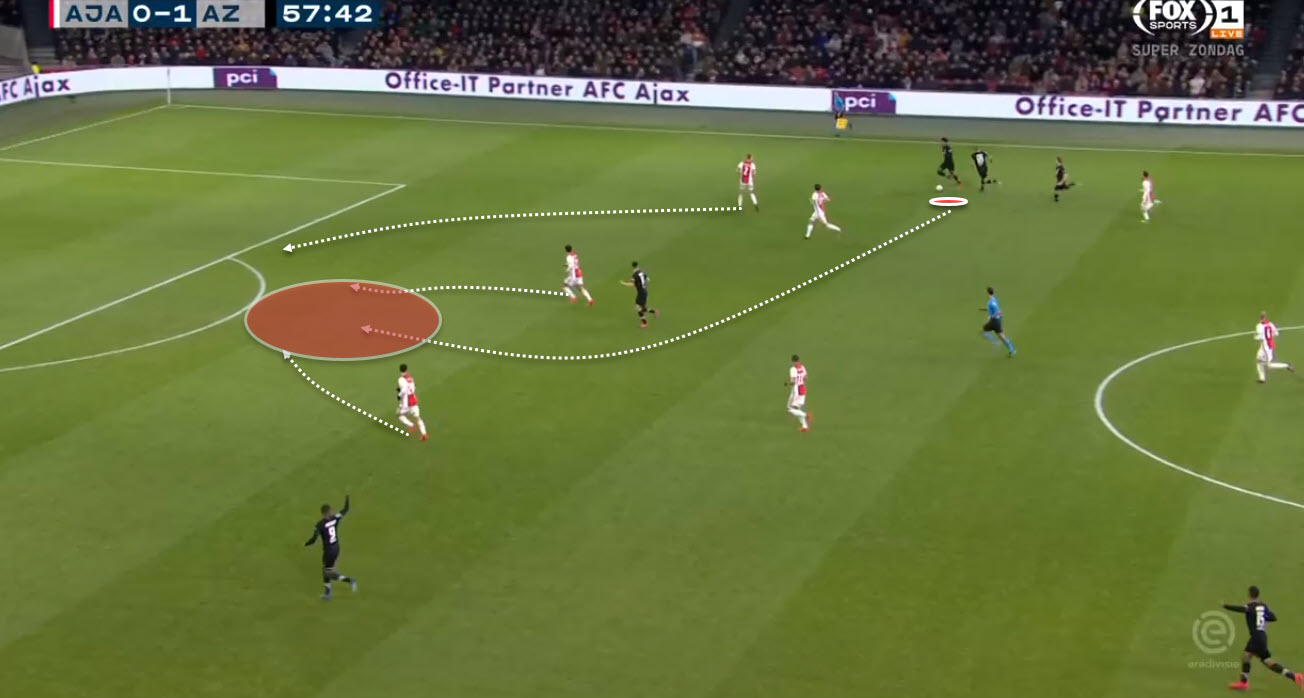 Here again, we see how dangerous Stengs is when driving inside in possession of the ball. This time, in the match against Ajax, we see him take possession of the ball outside before driving inside. There are three players who drop back to try to close down space but Stengs is confident in his own ability. He accesses the central space before getting a dangerous shot on goal.

The third and final suggestion that I have in terms of a replacement for Ziyech is a bit more of a stretch positionally but it would be one that would cost the club nothing. Ryan Gravenberch is only 17-years-old but he has been at the club since he was 9. The youngster is a regular fixture in the Jong Ajax side that plays in the Dutch second tier but this season has seen him start to make a genuine impact at first-team level.

Gravenberch plays most often as an ‘8’ in the centre of the midfield but he profiles as a player who could perform the same role as Ziyech currently does for the first team. Gravenberch carries the ball extremely well and regularly beats players in central areas. He also has a real ability when progressing the ball forward and breaking lines with his passing. 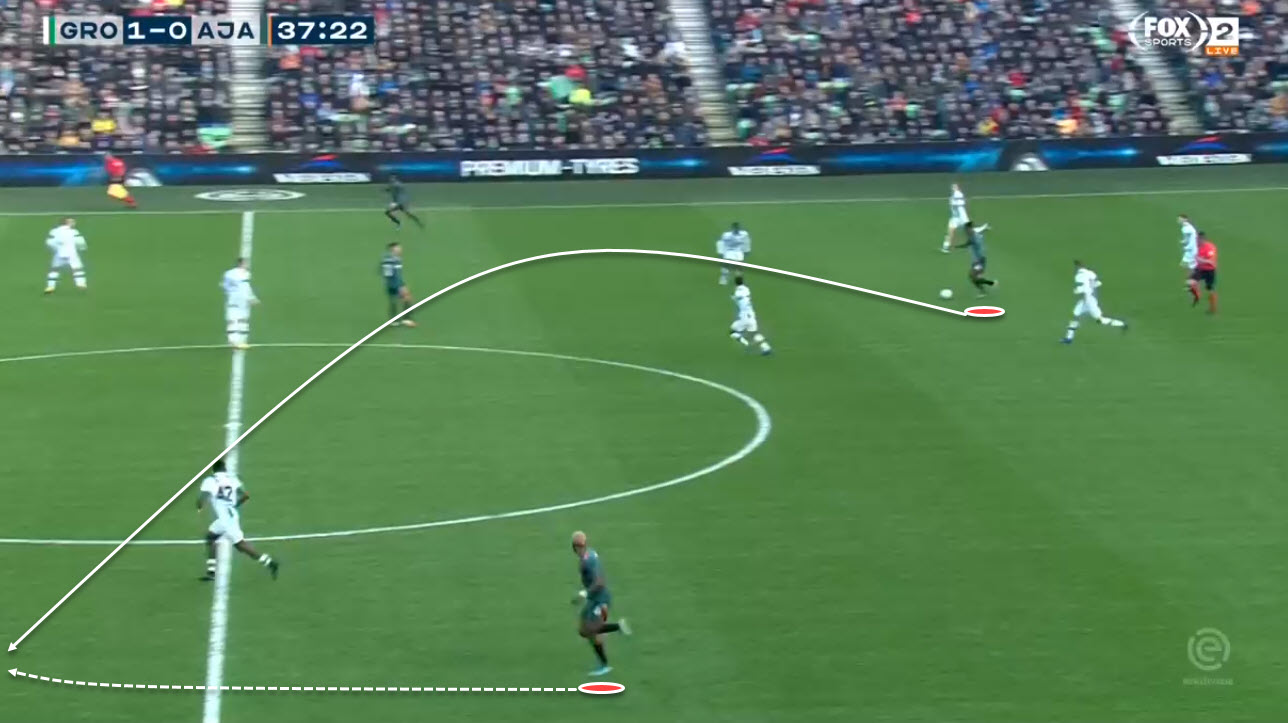 Similar to Ziyech we often see Gravenberch display the range and depth of his passing to access the runs of teammates. We see an example of this above with Gravenberch in possession centrally. With opposition midfielders trying to close him down and a runner on the far side of the field, we see the ball moved accurately and quickly across the shoulder of the opposition fullback. This pass allows the wide player to take possession and threaten the final third. 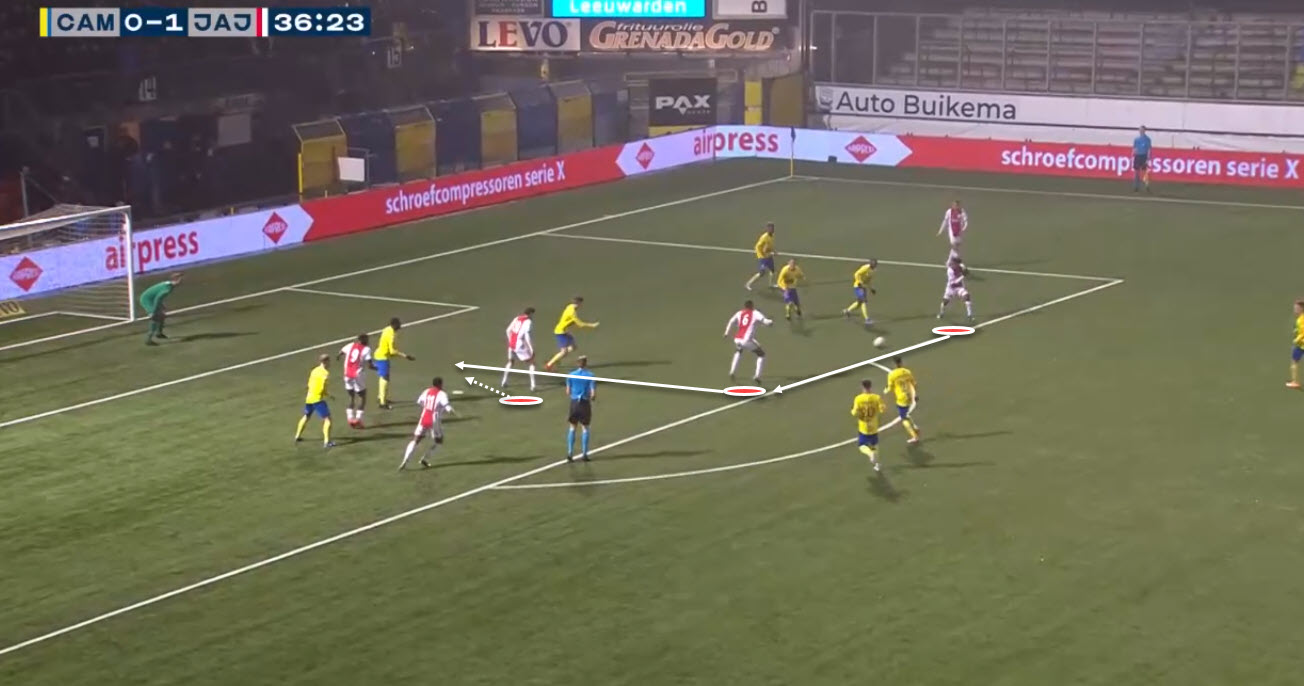 As well as having great range with his passing Gravenberch is also very creative in tight spaces. He often plays either one touch or even with a half touch as he allows the ball to run before flicking it into the feet of a teammate. We see an example of this creativity above as the young midfielder takes possession of the ball at the edge of the penalty area. He allows the ball to run past him and then flicks it with his heel past the defender for the attacking player to have a strike on goal. 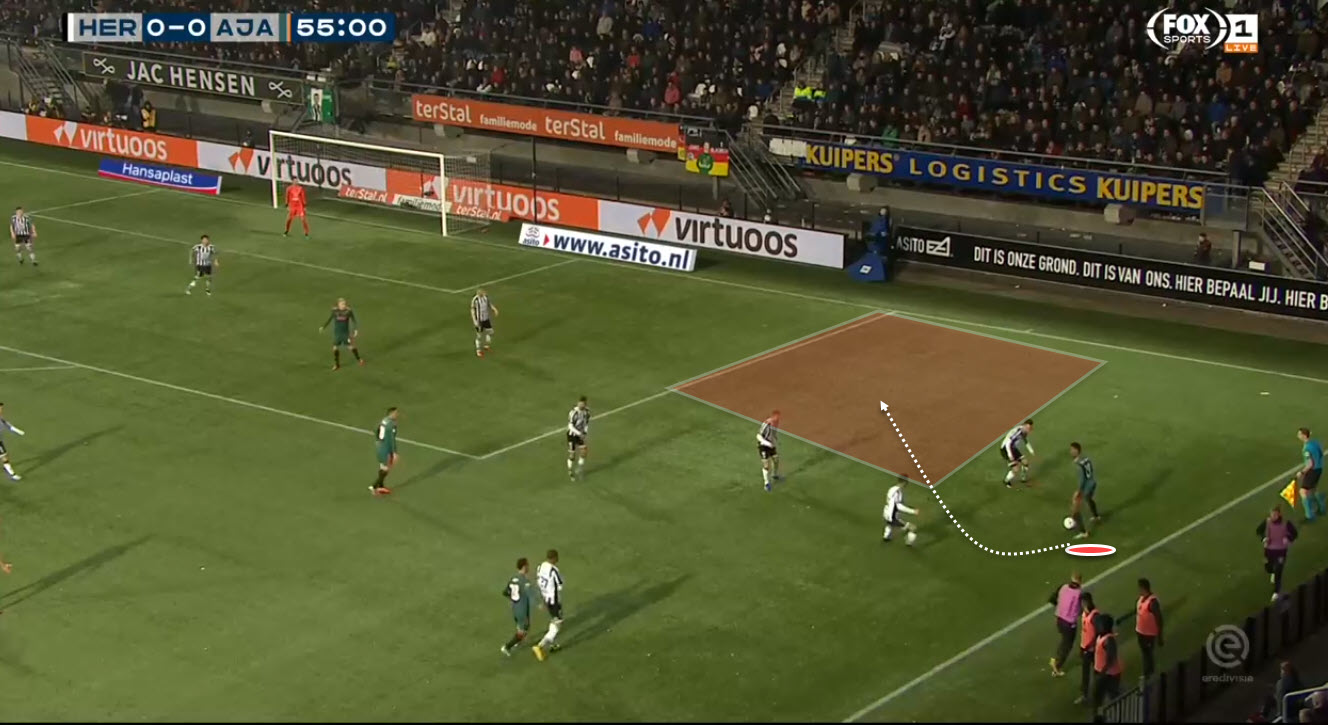 For a player who is so young Gravenberch is also extremely confident when carrying the ball and committing defensive players. Here we see him collect the ball wide on the right-hand side with a group of defensive players between him and the penalty area and no immediate support from teammates. In these circumstances, young players will look to play a difficult pass. In this instance, however, Gravenberch slows the game down before quickly accelerating and moving past the defensive players into the highlighted space. He then plays a superb pass across the face of the goal that nearly ends in an easy chance for a teammate.

For any side, in football, there are few more difficult tasks than replacing a key player. Hakim Ziyech is such an effective component of this Ajax side that it is difficult to see how they can source a direct replacement. Of the three players mentioned above, I believe that Calvin Stengs represents the most intelligent replacement although the cost to get him away from AZ Alkmaar would be prohibitive.

Chelsea fans should be excited at the prospect of having a player of Ziyech’s attacking ability joining the club in the near future. 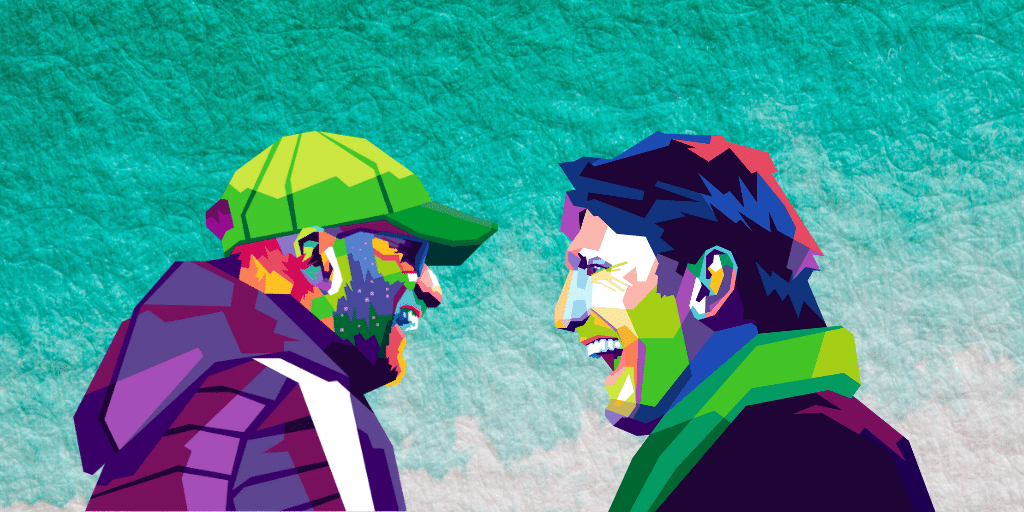 In last month’s magazine, I looked at three common pressing strategies and the patterns of play and structures that could […]