Sporting Gijón was ranked 1st in Segunda Division after four consecutive wins. They wish to be promoted to La Liga to play against teams like Real Madrid and Barcelona next season; however, they seemed to encounter their first problem on the way. Real Oviedo beat them with a penalty, but the content of the game was far more than that. 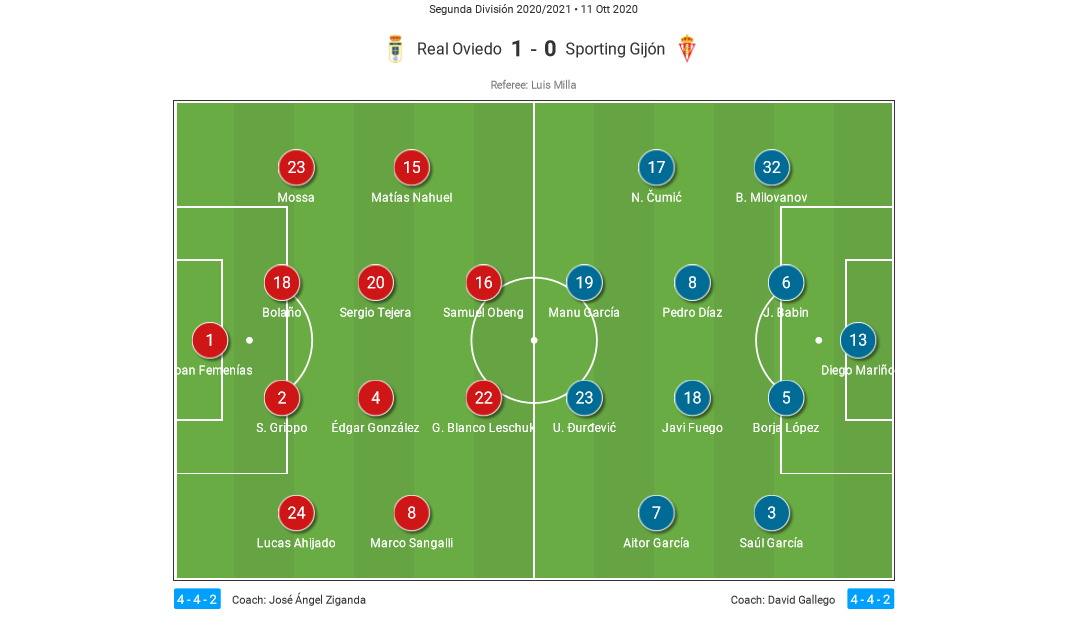 Real Oviedo didn’t win without reasons. A lot of threats and shots were created in their direct positional play. They employed a 1-4-4-2 system, with two strikers Blanco and Obeng extremely good at combating for aerial duels. Both are strong in physique, excelling at holding-up the defenders and being the first to access the ball.

With these two players in the front line, the tactics of Real Oviedo were designed to best utilise their strengths. When Oviedo built out from the back, their main goal in ball-circulation was to feed the ball to one of the goalkeeper and two central defenders, who was available to hit the long pass in the given scenario. Then they would play long to skip the lines, directly finding two strikers.

To make this direct approach more effective, the shape of Oviedo wouldn’t be a classic 1-4-4-2. Instead, the right-winger/midfielder Sangalli would come inside, staying behind two strikers and behind the opposition midfield line compactly, in order to control the second ball. Sangalli is good at dribbling and manipulating the opponent’s defensive line with his penetrative passes. Also, the central midfielders would stay compact to two strikers and Sangalli, ready for any second balls to come.

On top of this, the interactive movement between two strikers was also well-coordinated. If one striker was to drop and challenge for the aerial ball, the other one would usually run in behind to serve as a line-stretcher. Also, he would serve as a direct finisher if the challenging striker could flick on the ball in behind. They understood each other well and the roles might be rotated in different scenarios or in different part of the pitch.

Above image is the example of Real Oviedo’s offensive layout. In this scenario, Blanco stepped out to the midfield to combat for the first ball. Obeng read the cue and ran at the defensive line to potentially stretch the line. Sangalli came into the centre to partner with a midfielder for the second ball, staying close to Blanco. Eventually, Blanco won the first ball utilising his 190cm height and directly picked Tejera.

As Tejera latched onto the ball, Blanco cued his run to attack the space behind the defensive line. Obeng ran diagonally outwards to stretch the line horizontally. Then Tejera seized the timing and released the pass into the space behind the defensive line, finding Blanco. Blanco received the ball on the half flank and hit a high-quality cross, creating a huge threat for Sporting Gijón.

Apart from the offensive assets Oviedo possessed, they also exploited the weakness that Gijón exposed. Gijón’s flank-midfielders were late in supporting the backline, leaving the midfield line with only two central midfielders to cover.

In the above scenario, Oviedo’s centre-back Fernández hit long to find Leiva on the left flank, skipping the lines. Sangalli also moved towards the left flank to receive. You can see from the image that Gijón´s right-midfielder/winger Čumić didn’t chase back, leaving the flank overloaded by the opponents. Also, central midfielder Fuego was slow and behind the ball too. The midfield line only encompassed one player on this occasion. Later Sangalli received the ball from Leiva and cut inside, winning a penalty that decided the game.

Apart from their positional plays that created chances, Oviedo also pressed to win possession high up the pitch, creating another threat for Gijón. Oviedo’s pressing action was zone-oriented and action-oriented. Oviedo set their engagement line at the final third line. Once Gijón’s players stepped on this region, Oviedo’s front-line players would press and force to the side and mistakes. On top of this, if the opponent passed backwards, this would also trigger the pressing action of Oviedo as the aim of their pressing was more to force mistakes and hitting long.

In the first place, Gijón´s backline only consisted of two centre-backs. This left them no advantage in playing out when against the 4-2 pressing block of Oviedo as they didn’t have numeral advantage in the backline. Also, the left centre-back López is a right-footed and he was targeted to be forced to use his left foot. Oviedo intended to press in this manner to force mistakes.

From the above image, we could see the back pass of Gijón triggered the pressing runs of Oviedo. The 4-2 pressing shape matched up against the two centre-backs of Gijón. Obeng recognised the cue and curved his run to show outside for López, forcing him to use his right foot. López had no chance to switch the ball to the right flank and he was forced to play the ball out.

However, Gijón later managed to drop one more body to the backline, creating a 3v2 numeral superiority in the first phase of play. To atone for the numeral inferiority for Oviedo, their wingers would also try to step up to eliminate it. Nevertheless, this means that for Gijón a full-back on the same side could be freed due to the stepping action of the winger. Gijón managed to find the free man and progressed the play in this way. 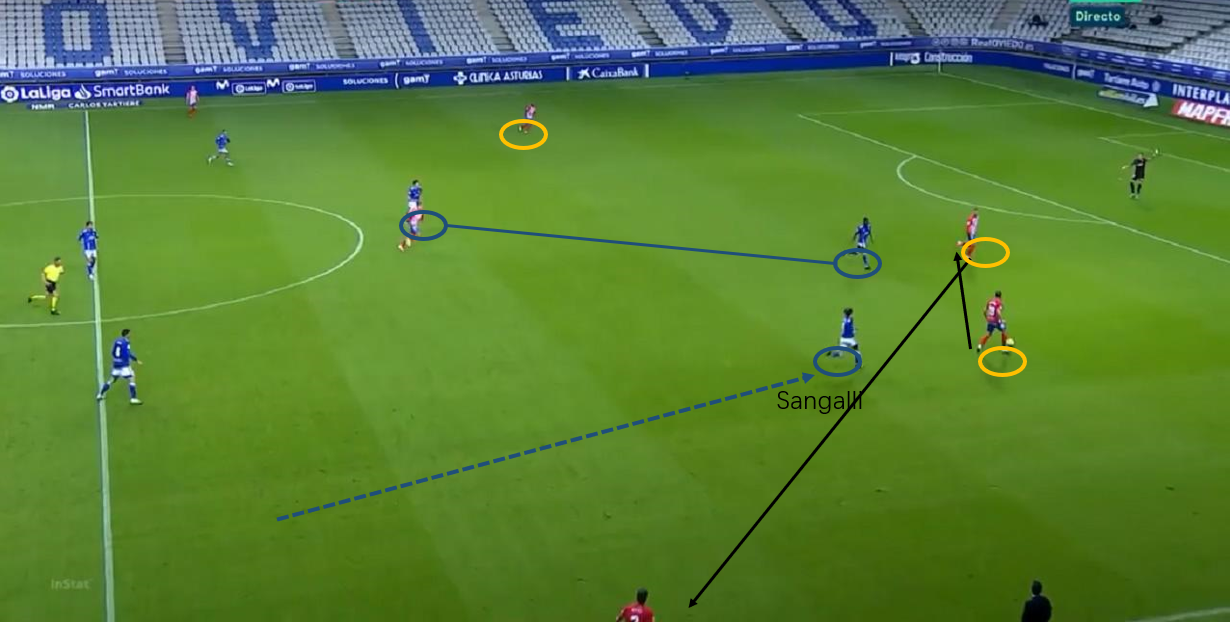 As you can see from above, Fuego dropped to the backline to form a back-three. This enticed the right-midfielder/winger of Oviedo Sangalli to step up and press, leaving a huge opening for left-back García. In the above scenario, Fuego was forced to face backwards and could pick free player García. Therefore, the left centre-back López moved a bit to support him, serving as a link player. He could link the play to García with one-touch as he was facing forwards and had the angle to pick García. Then the press was bypassed and Gijón managed to create chances in the next stages due to this.

After conceding the goal in the 38th minutes, Gijón was searching for solutions to pose threats on Oviedo’s goal and they succeeded, though not scoring the actual goal. They deployed the winger and the full-back on the same side to occupy the width together in the front. The flank defensive-unit-duo of Oviedo would step out to press and mark them while the rest of the players in 1-4-4-2 block of Oviedo sat more centrally. An opening corridor on the half-space was therefore created by the doubling width. Later, the flank attacking unit could use underlap to exploit the vacated corridor, creating a high-quality chance for delivering crosses.

The image above manifested the scenario the doubling the width. The right-winger García and right-back Milovanov together occupied the flank, instigating the flank-defensive-duo to commit while the rest of the block stayed in the centre. Thus, the half-space was left empty. Milovanov recognised the opening and underlapped to exploit the space. He latched onto the ball in a plain opening and hit the final cross of high quality.

Apart from underlapping to exploit the space, they could also deploy a third-man to utilise the space. That would usually be the former Manchester City player Manu García. He was the striker on the paper but he was a playmaker in the game, moving to the ball side, asking for the ball to feet and dictating the play. He could release some creative final passes or direct finishing on his own.

In the above image, the right flank offensive unit provided a double width. The right-back was overlapping at this moment and this further vacated the space in the half-space. Manu García came into that opening well-timed. He asked for picking his feet. After receiving the ball, he ran with the ball in the opening and finished on his own in the box. That was a high-quality finishing chance.

Real Oviedo won the match with their effective direct approach, while the doubling width deployment of Sporting Gijón is also worth studying. If Gijón desire to go for promotion this season, more solutions should be created.