In this data analysis piece, we will be looking out for the best strikers currently playing in the Eliteserien. Strikers have come a long way in redefining their traits in the modern game. Gone are the days where they had to be tall and act as a target man inside the box. Modern managers are hugely dependent on well rounded forwards for the team’s successful tactics.

In our analysis, we will be considering both the attacking as well as defensive attributes. Goal scoring and shot taking is the most important trait for a striker and his other contributions to the team’s overall possession play will also be analyzed. We will be looking at players who have registered at least 700 minutes of football in the league this season.

We will shortlist the best player according to the statistics and data with which we will analyze. Let’s get into the analysis.

The most important attribute of a striker is to finish the chances that he gets. Even if it is a half-chance, a top striker is expected to finish it with ease. To measure the efficiency of a striker’s finishing ability we have to compare his xG stat with that of his actual goal tally.

From the graph, we have shortlisted some of the best outperforming players of their own xG per 90.

Kasper Junker – The 26-year-old Danish striker plays for league leaders Bodo/Glimt. He averages an xG per 90 of 0.65 and has an actual goal tally of 0.94 by outperforming his xG by a value of 0.29.

Victor Boniface  – The 20-year-old is one of the hottest products in the Eliteserien and another a very good attacking talent from Bodo/Glimt. Though he has played only 740 minutes in the league, he has made most of his available minutes by scoring goals at a good rate. With an xG of 0.44, his actual goal tally stands at 0.73 per 90.

Sivert Gussiås – The 21-year old striker from Sandefjord. Another very good attacking talent, He has recorded an xG per 90 of 0.24 while scoring 0.45 goals per 90.

The scores for each of the top players based on this category is given in the image below. 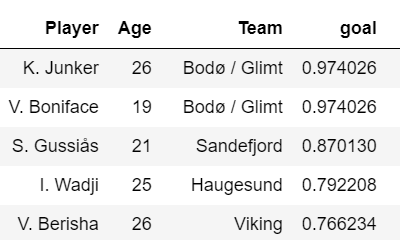 At times, the finishing ability, which is to use the xG metric, won’t give a clear picture of one’s ability to take his chances as sometimes the goalkeeper might have performed extremely well to deny a near-perfect goal. This will eventually paint a dark shade over the striker but in reality, he shouldn’t be let down by his finishing. A metric like the post-shot xG would do fine, but since we don’t have that we will use the percentage of the shots that have been on-target when compared to that of the off-target ones.

Some of the high shot volume takers in the list are:-

Daouda Bamba – 25-year-old striker from Brann. Bamba has averaged 1.51 shots on target and 2.29 shots off-target. In total, he averaged 3.8 shots per game which is the highest in the entire division.

Ohi Omoijuanfo – 26-year-old from Molde FK. Another high volume shot taker, Omoijuanfo has averaged 3.5 shots per game with 1.42 of them have been on target and 2.08 being off-target.

Others who have had most of their shots on target but aren’t a high volume shooters showing they could be effective when provided with the chances are:-

Leke James – 27-year-old Nigerian striker from Molde. James has had a high percentage of his shots on target and has a great shooting efficiency. Out of his 2.32 shots per game, 1.45 of them have been on target (62.5%) and 0.87 have been off-target.

Kasper Junker – The Danish striker has averaged 1.41 shots on target and 1.1 shots off target while taking a good amount of 2.5 shots on average every time he steps out onto the pitch.

Mustafa Abdellaoue – 32-year-old striker from Sarpsborg. The veteran has attempted 2.3 shots on the average per game and 1.11 of them have been on target and the rest off target.

Gone are the days where strikers used to be tall and every team would use him as the target man to launch a long ball to the strikers and use his aerial abilities to full effect. In the modern game, we see short strikers making their way into the game like Roberto Firmino of Liverpool, Timo Werner at Leipzig. Though they aren’t necessarily tall, they are still good in the air and expected to win their duels in the air. Since most teams also defend from the front, they expect their strikers to be the first line of defence and by asking them to engage in duels and successfully win them. 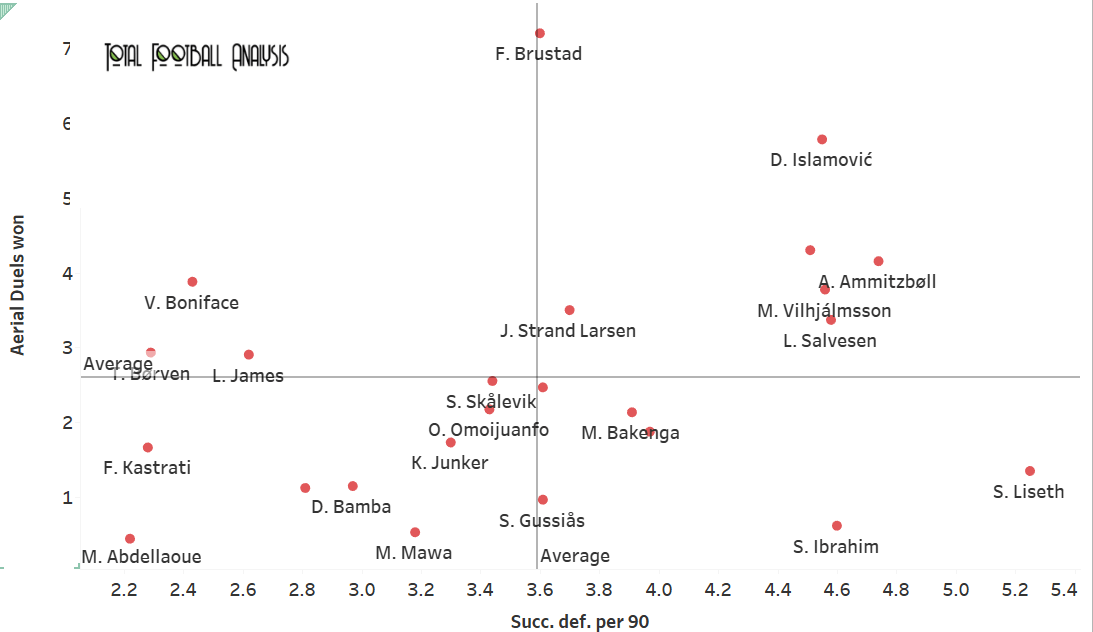 The top options according to the metrics that we have taken for this category are:-

Dino Islamović – 26-year-old striker from Rosenborg. Islamović has averaged 4.55 successful defensive actions every game and has also won 5.78 aerial duels every game. He is one of the most hardworking strikers in the league who is very good in the air.

Fredrik Brustad – 31-year-old forward from Mjøndalen. Brustad has averaged 3.96 successful defensive actions every game and has also won 7.2 aerial duels every game. He has won the most number of aerial duels in the league and is very good in the air.

Kosuke Kinoshita – Kinoshita has averaged 4.51 successful defensive actions every game and has also won 4.3 aerial duels every game. He is integral to Stabæk’s direct style of play.

The scores of the players pertaining to this section are given below:-

Dribbling and presence in the box

The ability to beat the defender and score a goal is very common among the modern-day forwards as they are expected to possess some great 1v1 dribbling skills. Also, the striker should always be making runs into the box and be a threat there as that might eventually pull a couple of defenders to them that could create spaces for their teammates. Here we will compare the players with their dribbling success and the number of touches they make inside the penalty box per game.

The shortlisted players according to this category are:-

Moses Mawa – 24-year-old striker from Strømsgodset. The youngster has averaged 2.7 successful dribbles per game and 4.56 touches inside the penalty box every game.

Victor Boniface – 19-year-old striker from Bodo/Glimt. The teenager has averaged 3.15 successful dribbles per game, the most in the division, and 3.4 touches inside the penalty box every game. Though the number of touches he makes inside the box is very less he is very competent in 1v1 situations that make him extremely dangerous with isolated defenders.

Ibrahima Wadji – 25-year-old striker from Haugesund. He has averaged 1.79 successful dribbles per game and 4.94 touches inside the penalty box every game.

Daouda Bamba –  He has averaged 1.82 successful dribbles per game and 4.67 touches inside the penalty box every game.

The scores of the players for these categories is given below:-

The ability to create chances for their teammates and contribute to the overall buildup play that leads to goals is an added advantage that an elite forward can give. Dropping into the midfield and playing as a false-9 is also very common in the game these days. Their ability to play key passes and smart passes to their teammates in spaces could be very crucial. 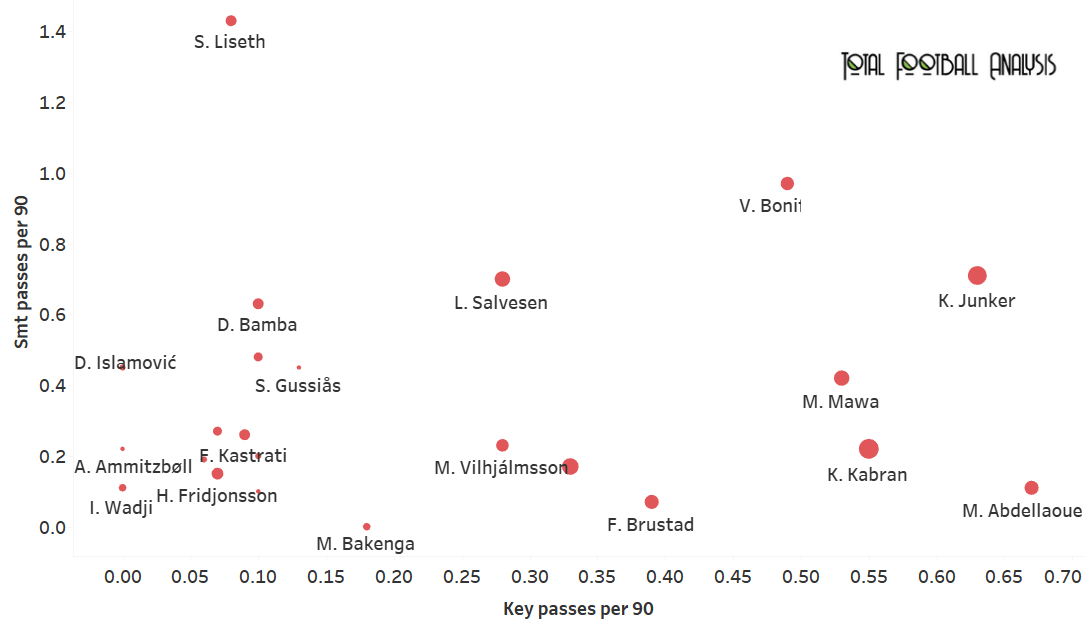 The best players in terms of offering creativity to the team are:-

Victor Boniface – One of the best creative forwards in the league, he has averaged 0.49 key passes per game and 0.97 smart passes per game. His xA though is a little low at just 0.09 but his contribution to the buildup is pretty top-notch.

Kasper Junker – The Danish striker stands well in this regard too as he averages 0.63 key passes and 0.71 smart passes per game. His xA per game is also good for a forward at 0.18 per game.

Mustafa Abdellaoue – Mustafa has averaged 0.67 key passes, the most in the division, and 0.11 smart passes. This shows that he is not that involved in the deeper plays but his final balls are very crucial to the team’s play.

Moses Mawa – Mawa has averaged 0.53 key passes and 0.42 smart passes by equally contributing well in both the final third as well as in the middle third. His xA value per game also stands at 0.11.

Sondre Liseth – 23-year-old striker from Mjøndalen. He has averaged just 0.08 key passes per game but makes up for it with a huge number of smart passes per game (1.43).

With the different metrics and the categories analyzed statistically, we have shortlisted the top-performing players by aggregating scores in each section. The scores are found in the image below. 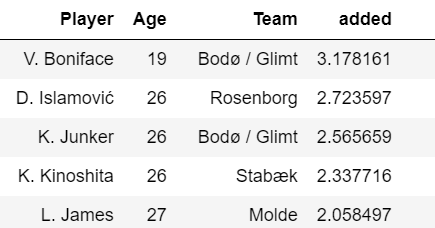 It isn’t surprising to see that a teenager here has topped the list as the Scandinavian league have been the land of opportunities and have been dominated by the likes of youngsters in recent years. Victor Boniface though he has played a few minutes this season, has immense potential that could see him make a similar trajectory to that of the likes of Borussia Dortmund’s Erling Haaland. 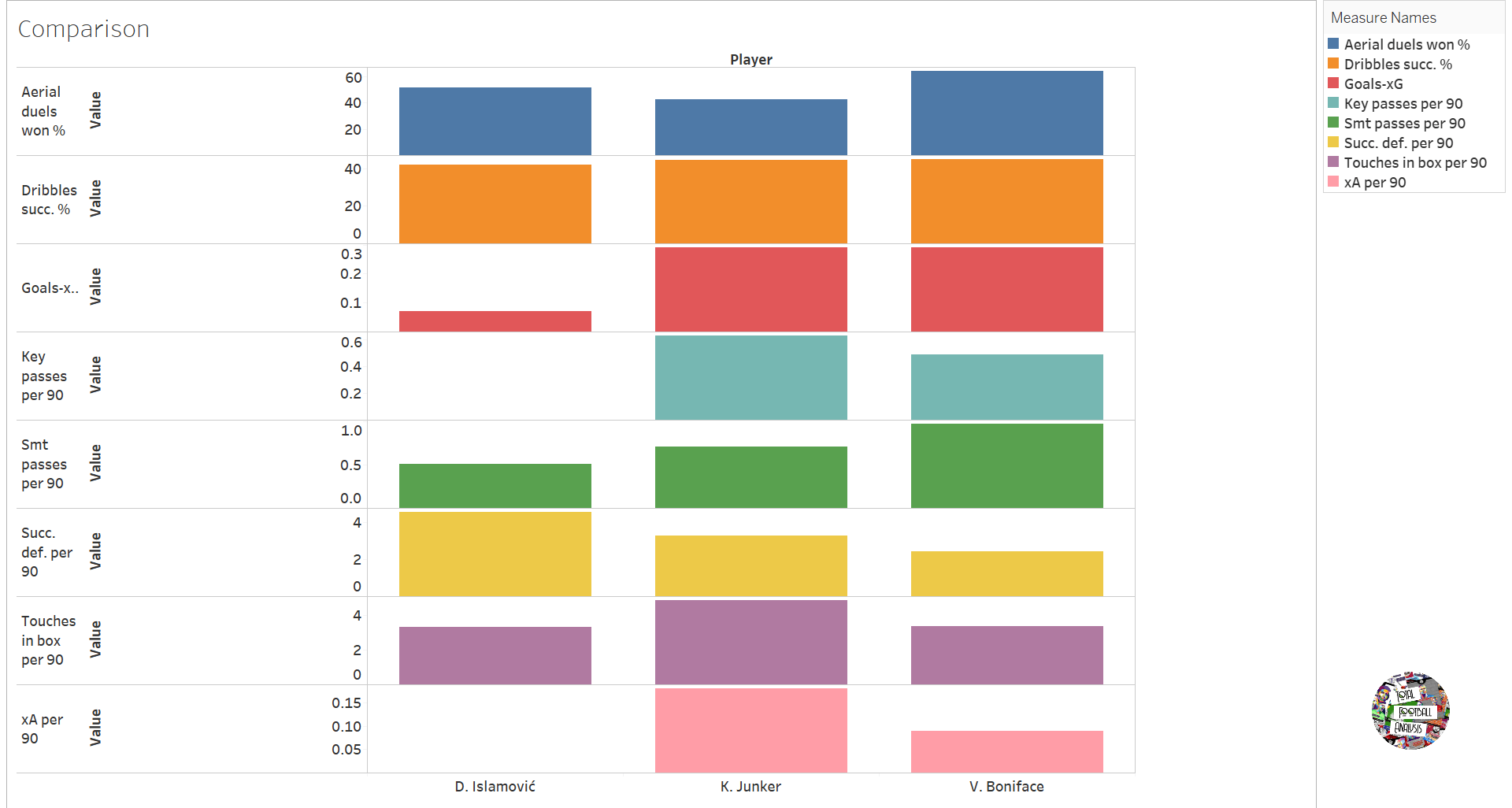 Following him at 2nd and 3rd spot are Islamovic and Boniface’s Bodo/Glimt teammate Kyle Junker. They are currently in their peak years and have huge potential to succeed in a much bigger league. The likes of Manchester City who have been wanting a young forward to replace the soon to be departing Sergio Aguero can look into these players and scout them.

After performing the statistical analysis, we have found the top 3 centre-forwards currently plying their trade in Norway. From those three players, Victor Boniface, despite being only 19 years, stood out as the best player statistically.